The Hatsan Carnivore 135 – My Intro to Big Bore Airguns 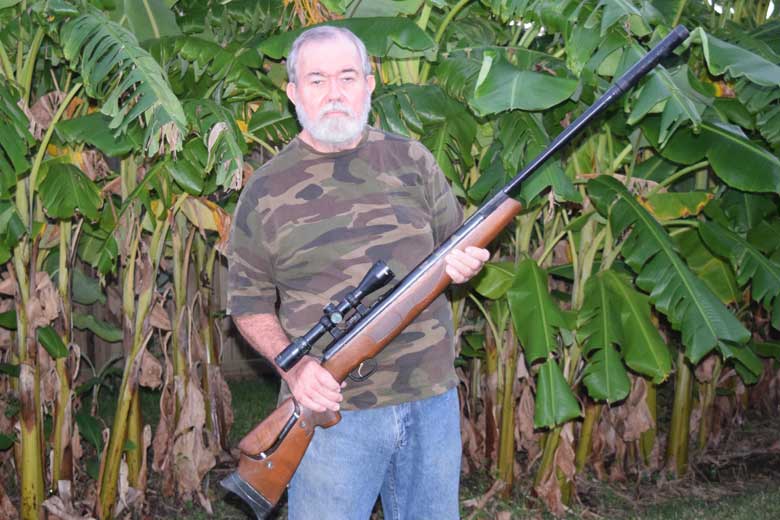 HAM reader Mike Holmes is enjoying his .30 caliber Hatsan Carnivore 135 air rifle. Here he tells us about his experiences with it so far…

When I was a youngster, my first gun was a single shot .177 pellet rifle. I literally shot this thing apart over several years. I used it for hunting random birds, and even a rabbit or two. It was definitely a step up from my Daisy BB gun, and gave me many hours of satisfaction.

Even today I still have a couple of single shot .177s, and have taken pests up to opossums with them. To me, such a simple pellet gun is a fun and economical way to do a lot of shooting.

With this attitude, when I saw a .30 caliber Hatsan pellet rifle on the market, I ordered one immediately. I have been just as pleased with it so far as my younger self was with that old .177!

The Hatsan 135 Carnivore is definitely an “adult” air rifle – as it weighs 10 Lbs even with a fairly short 10.6 Inch barrel. The gun is imported from Turkey, and the stock is decent Turkish walnut with an adjustable cheek piece.

Other nice features include a two-stage adjustable trigger and a good picatinny rail for scope mounting. With the Vortex 150 BAR gas ram, Hatsan bills it as “the world’s most powerful break barrel air rifle”. It’s listed as producing up to 34 Ft/Lbs of Muzzle Energy and a maximum velocity of 590 FPS.

I’ve done some testing with a Prochrono chronograph and a variety of .30 pellet weights. My speeds were a bit less than the manufacturer’s claims, but still impressive:

The Polymag pellets have a polymer “tip” over a hollow-point nose, designed to increase expansion, the others were round nosed with pronounced skirts. You can read a full HAM review of them here.

Of course these pellet weights are considerably heavier than my old .177 – or even .22 and .25 caliber ammo!

My Hatsan .30 came with an Optima 3-9x40AO scope. Although this optic seemed to work fine and to be holding up to the springer’s recoil, I replaced it with a Hawke 2-7 and use the supplied recoil buffer between the rings – “just to be sure”. 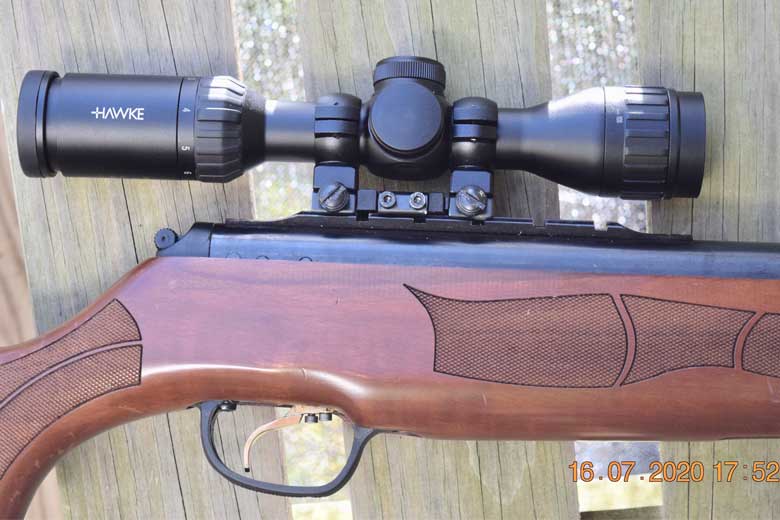 The rifle also comes with an impressive recoil pad that might be effective on a much more powerful centerfire rifle – but hey, it LOOKS pretty darn neat!

Accuracy out to 50 Yards was very good with all these pellets. 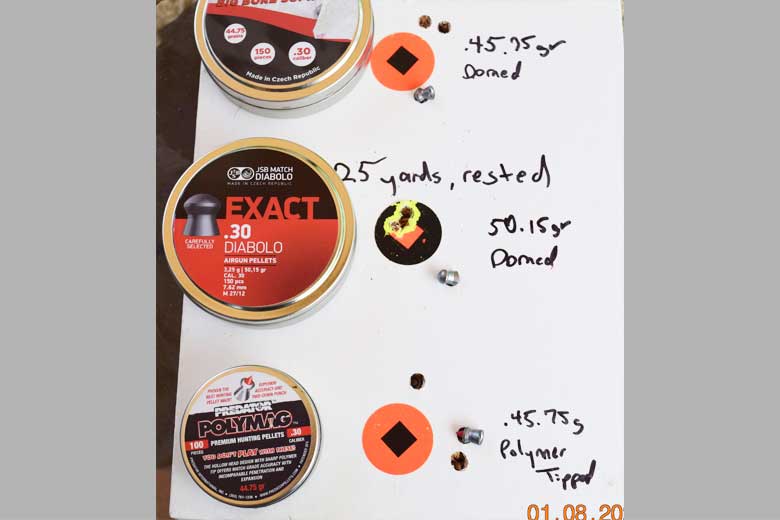 My only “test” on game so far was a fox squirrel we caught raiding our pecan trees that my wife shot at 50 Yards – from a rest. She hit the neck just below the head, and the squirrel expired as surely as any I’ve shot over the years with a .22 LR or shotgun!

This Hatsan comes with an expansion chamber near the end of the barrel which functions as a bit of a sound suppressor, but it still makes a noticeable “pop” when shot. Because of this I had Donny FL build a suppressor for mine. This does an excellent job of quieting it down. The Hatsan barrel was already threaded for an end cap.

Even at .30 caliber, the Hatsan Carnivore 135 air rifle is NOT a big game airgun. But it does have more than enough power for just about any “small game”. 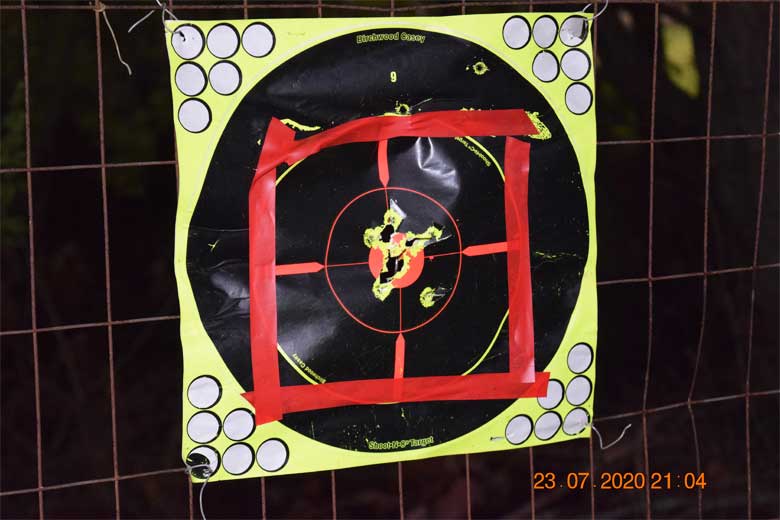 With careful shot selection and the heavier pellets available, “varmints” the size of raccoons – and probably up to coyotes (with a VERY good shot!) should be very possible, when in range.

Because of the weight and size of the gun, it is not really well suited for “woods walking” – even for adults – and a sling will be a valuable accessory. But for hunting from a stand or blind it would be very workable.

For those in rural areas, it would be a great tool to keep by the back door for marauding varmints at night – and here the break barrel single shot action can be an advantage. Leaving the gun “cocked and locked” for respectable lengths of time – as long as it is safely secured – should not be a problem due to the gas ram action.

But I find cocking and loading easy enough that it could be kept unloaded and “at the ready” just as effectively. Furthermore this air rifle is quieter than even a suppressed .22 LR!

While it is certainly true that a PCP air rifle would produce more power, this Hatsan requires no compressor or other charging equipment. Furthermore, no time is needed to “power” it up – just break the barrel!

Because of the power the rifle does have, cocking takes a bit of force, but it is not really very difficult for an adult. A kid? Not so much…

With the only supplies needed for this Hatsan Carnivore 135 air rifle being pellets, it also makes a very economical and enjoyable “range toy”. With a suggested retail price of around $300, I thing it’s lots of cheap fun!

The Hatsan Carnivore 135 is the .30 caliber version of the Hatsan 135 QE Vortex air rifle available from Pyramyd Air and Airgun Depot. 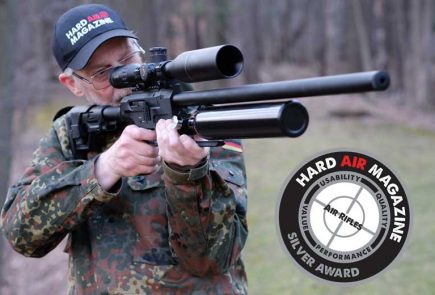