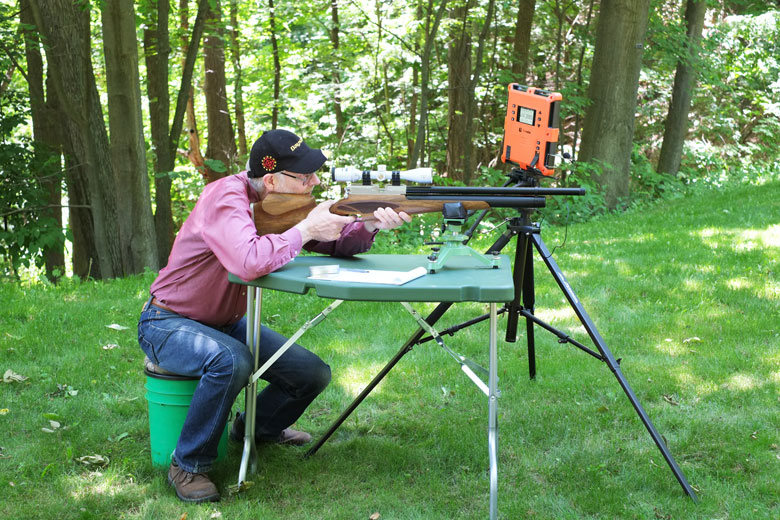 Hard Air Magazine carried an overview of Labradar last month. Now we can report on using Labradar to record airgun pellet velocities. It worked very well in out test!

We set up Labradar on a tripod and used the Airgun Trigger Adapter microphone kit. This was set at one side of the muzzle to record the Muzzle Velocity, in compliance with the instructions.

The system works by using Doppler radar to measure the speed of the pellet at multiple points during its flight to the target. This means that – unlike a chronograph – Labradar measure more than just Muzzle Velocity.

Below, the velocities for one pellet at multiple ranges measured by Labradar allows us to see how FPS changes with distance. Green discs represent the Labradar FPS readings. The solid line is a computer-generated “line of best fit” produced by the Apple Numbers spreadsheet that shows probable pellet velocities at other ranges. For example, with a .177 caliber Marauder… 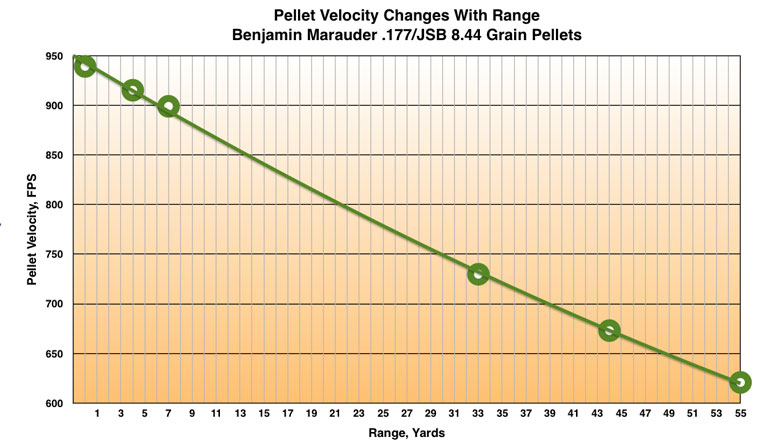 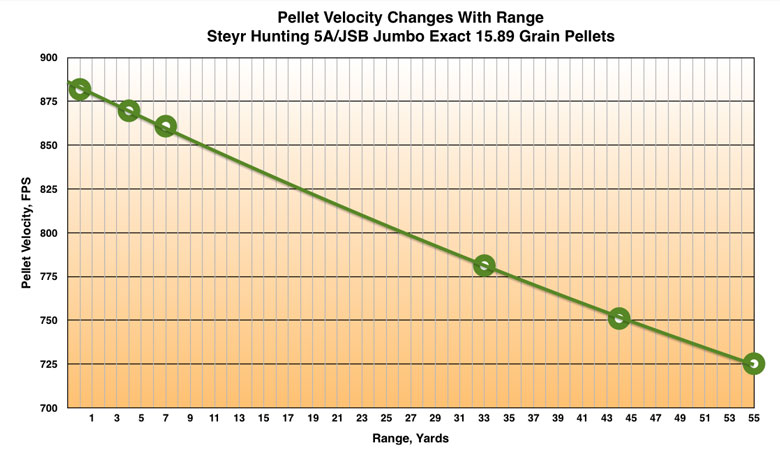 Testing was undertaken in the open and also on an outdoor 55-yard rifle range. Like most rifle ranges, this one had a system of overhead baffles downrange to prevent wayward shooting. These baffles are supported by posts.

We tested Labradar in a lane next to the post supports. The system worked perfectly and was not disturbed by the baffles or posts, as we had suspected it might be. Our concern was that the radar waves would be reflected back from the baffles and posts, giving false readings. This did not happen.

Another concern the HAM testers had for Labradar to record airgun pellet velocities was that it would not be able to detect the noise of a silenced air rifle. For this test, we used a Benjamin Marauder in .177 caliber – our “gold standard” for low noise levels. Again, no problem!

Even without being set to it’s most sensitive setting, we were able to get Labradar to record airgun pellet velocities from the Marauder without any issues.

The manufacturer’s specifications for Labradar to record airgun pellet velocities say that the maximum range is 30 yards. This is due to the small size of the pellet, not being able to reflect back enough of the radar waves at longer distances.

However, we had no problems with Labradar to record airgun pellet velocities at ranges out to 55 Yards. That’s nearly twice the manufacturer’s claims. Maybe it could even have functioned at even greater distances, but this was the length of the range at which we were shooting the test.

Incidentally, Labradar recorded the distance to the target on the 55 Yard range as being exactly 55.0 Yards. We double-checked this by using a SIG SAUER Kilo850 digital rangefinder. This confirmed the range as being 55.0 Yards.

In this HAM test, we used Labradar to record airgun pellet velocities for the following air rifles:

Benjamin Marauder .177 cal
Steyr Hunting 5A in .22 caliber
Daystate Wolverine in .30 caliber (that’s the gun you see in the photographs)

Labradar worked perfectly with all of these calibers. Thanks to HAM tester Pete Shooter for letting us use his Steyr and Wolverine! 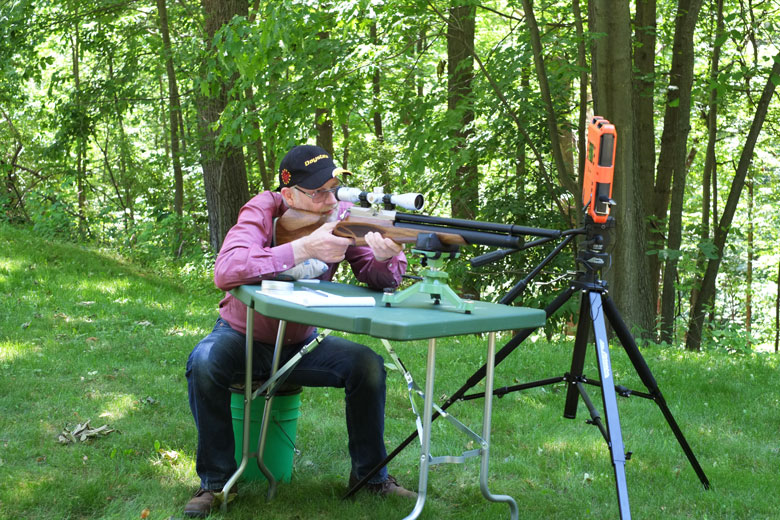 Incidentally, the system needs to be preset to record certain maximum and minimum velocities. We set it to the “Handgun” velocity range preset as this covered the range from 246 FPS to 1,722 FPS. There’s no specific “airgun” setting for muzzle velocities in Labradar, but clearly the “Handgun” setting is ideal for our purposes.

The system’s built-in menu system works well. But like all software, it takes a little while to learn and become fully proficient with its use. For example, I wanted the preset distances to be 10, 20, 50, 40 50 Yards. But the Labradar was not set-up like that for our first tests. It is now! 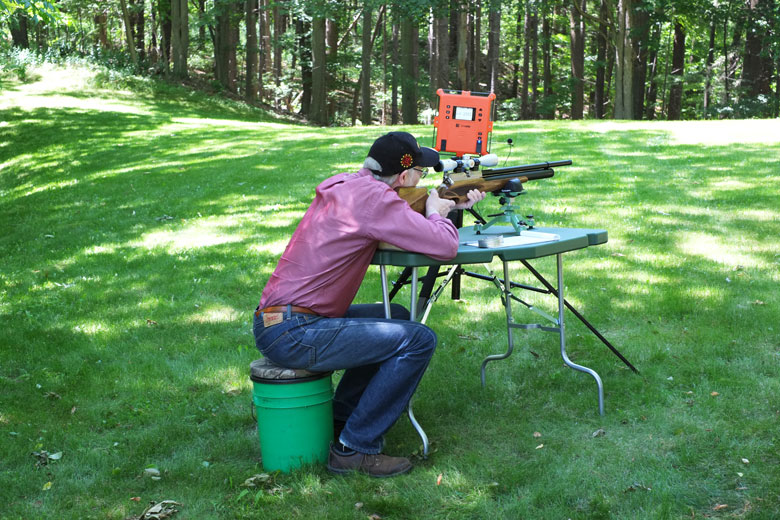 After some practice, I feel that I now have the unit set up as I would like.

But if you want to use Labradar to record airgun pellet velocities at almost foot-by-foot distances downrange, it can do that too. Labradar has the capability to record the data for each shot on a digital SD storage card. Using the SD card, the data for hundreds – or even thousands – of shots can be recorded and stored.

Again, the HAM testers found that the SD card functionality worked well. We were able to take the Labradar data and download it into a PC. It then opened-up easily in the Microsoft Excel spreadsheet program, allowing for easy analysis and charting of the data, if required.

Not being PC users, we also tried to download the SD card data onto one of our Mac computers. This was less successful. Although the Mac could see the SD card, we were not able to download the data into the Apple Numbers spreadsheet program.

However, we did find a simple workaround. We copied the Excel file from the PC, loaded it into the Mac and were able to use the data in Apple Numbers by that route.

Labradar is certainly a product that has made the HAM team think about the possibilities it offers!

Our next test will be to try using Labradar to record airgun pellet velocities that can be used as basic data to calculate pellet Ballistic Coefficients.

As Ballistic Coefficient data is highly-prized, yet difficult to find for many pellets, we’ll let you know the results as soon as possible. But we’ll be starting-out with high expectations!

You can find out more about Labradar at http://mylabradar.com/