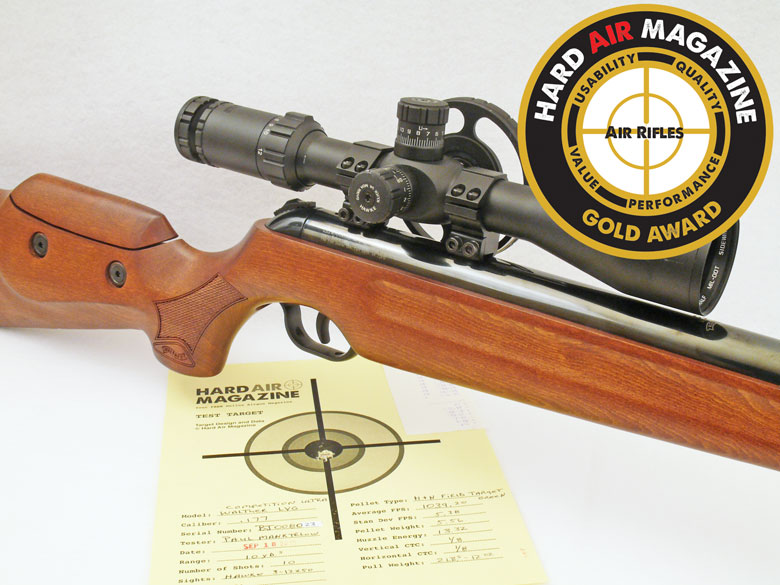 Plastic trigger.
Chunky stock.
Safety can be difficult to access.

The Walther LGV Competition Ultra air rifle demands serious consideration if you're in the market for spring/piston gun of the highest quality.

The LGV will suit for Field Target competition and hunting within it's power capacity. You could use it for plinking too, although that's similar to using a Porsche to drive to the supermarket for the week's groceries!

This air rifle shoots lead-free pellets better than any other tested by HAM to date. If you want to, or must, shoot alloy pellets, the LGV is the gun to have.

Accuracy and consistency make the LGV a great choice for the discerning shooter who's looking for a "traditional" approach to airgunning.

The Walther LGV Competition Ultra is a beautifully made, accurate, precision spring/piston air rifle. It’s certainly worthy of very serious consideration by anyone looking for a top-line springer.

But there’s a catch. It’s up against some very serious and well-established competition. Everyone will compare the LGV against those longstanding favorites, the Air Arms TX200 and the Weihrauch HW79. The choice between any of these very fine air rifles will probably rest more on personal taste and feelings than any particular single feature.

The LGV is quieter than the TX200 and HW97. If you want – or have to – shoot lead-free pellets, it’s a great choice. This is the first air rifle tested by HAM to shoot lead-free pellets better than lead. But it’s also the most expensive and by a fair amount, depending on where purchased. Beyond that – it’s your choice!

The Walther LGV Competition Ultra air rifle is aimed at the experienced air rifle shooter who understands that extreme muzzle velocity is not the primary determinant of performance. So muzzle velocity is in the 800 fps range with medium weight (8 to 9 Grain) pellets – as is preferred by many knowledgeable shooters.

As would be expected, muzzle velocity jumps to well over 1,000 fps with light alloy pellets, actually as high as 1,065 fps with the Gamo Platinum 4.7 Grain alloys.

This level of performance gives muzzle energies in the 12 to 13 Ft/Lbs range with 5 out of the 7 standard HAM test pellets. That’s all except the lightest (which gave nearly 14.5 Ft/Lbs) and the heavy Baracudas that dropped to 10.65 Ft/Lbs.

Overall, this performance shows a well-designed action that’s well suited for both competition and hunting use.

Accuracy of the Walther LGV Competition Ultra Air Rifle tested by HAM was outstanding. Just take a look at the test targets below!

Trigger pull weight of the Walther LGV Competition Ultra air rifle tested by HAM averaged 2lb 13oz. While this is quite light, it actually felt lighter than it measured.

The trigger of the Walther LGV Competition Ultra air rifle can be adjusted for first stage travel and pull weight by adjusting externally-accessible screws. As always, the HAM testers did not adjust the trigger. However, it behaved perfectly straight out of the box and we found no need to make any adjustments from the factory settings.

The trigger pull was very consistent and predictable. This is clearly a high quality unit, although the up-market effect is somewhat spoiled by the trigger blade being manufactured from plastic. Yes, we know that this shouldn’t matter, but such a tactile part of the gun is important to the shooter’s impression. The HAM team prefers a metal trigger! 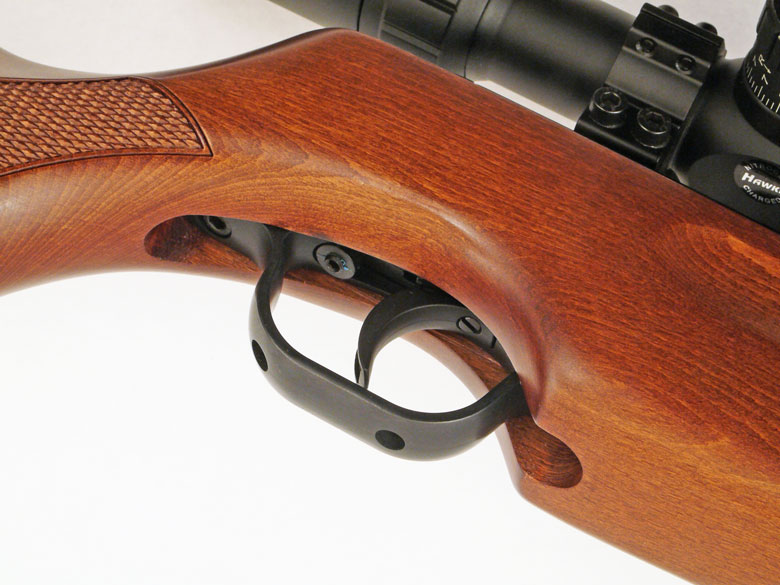 Cocking effort measured 37 lbs.This is approximately as expected. However, the cocking action of the Walther LGV Competition Ultra air rifle is very smooth and – again – feels less heavy than it measures, in spite of the very short barrel.

One unusual aspect of the cocking action is the need to depress the barrel release catch by pushing up, just as you’re pulling down on the barrel to cock the gun. This sounds counter-intuitive, but actually it becomes second nature remarkably quickly and is a convenient way to operate this useful safety feature. 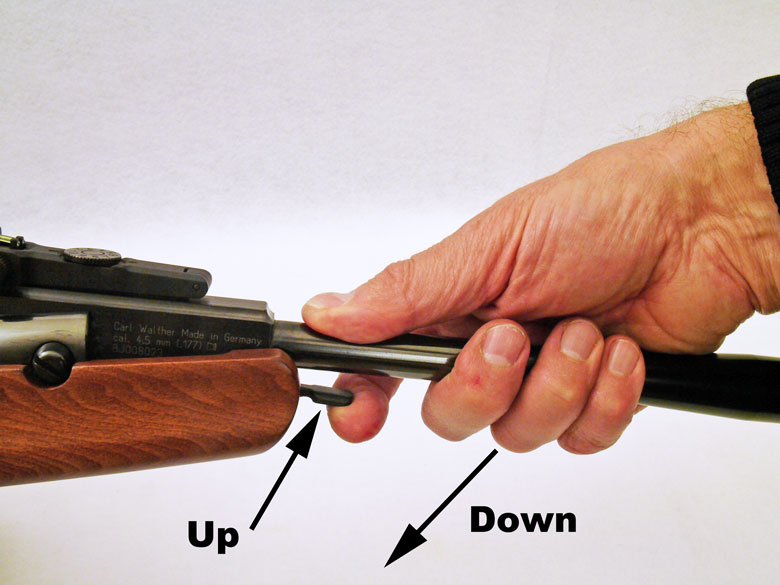 Interestingly, the more expensive an air rifle, the less are the claims for it made by the manufacturer! This is true also with the Walther LGV Competition Ultra air rifle.

The muzzle velocity claim for the LGV is the obligatory 1,000 fps. This is far surpassed with alloy pellets, but the best the HAM test rifle would achieve with light lead pellets – 7.0 Grain RWS Hobbys – was 914.69 fps. Unfortunately the muzzle velocity claim is made specifically for lead pellets, so the LGV falls a little below par for this – not that most of its owners will be complaining.

Trigger pull is claimed to be 3 Lbs. The LGV tested by HAM had an average trigger pull weight of 2 Lbs 13 Oz. That’s good.

Another claim is that the cocking force is 38 Lbs. The Walther LGV Competition Ultra air rifle tested by HAM recorded a cocking effort of 37 Lbs, so again the claim is beaten.

Walther claims that the LGV benefits from their “Super Silent Technology”. Judging from the HAM testers subject assessment of the noise level produced by the Walther LGV Competition Ultra Air Rifle Test Review, we’d certainly agree that this is effective.

Consistency was another strong suit for the Walther LGV Competition Ultra air rifle tested by HAM.

As already remarked, accuracy was consistently excellent with all the standard pellets tested by HAM.

Standard Deviation – the measure of shot-to-shot fps consistency – was also very good at an average of just 6.23 fps. All except the Gamo Raptor PBA pellets gave Standard Deviations of less than 7 fps. This is good performance for any air rifle.

The Walther LGV Competition Ultra Air Rifle Test Review is not fitted with a silencer. Instead the muzzle is threaded for an European-style screw-on accessory silencer. Of course this approach presents big problems for US users as then ATF approval would be needed to make a silencer-equipped legal.

Fortunately, this is not a big problem.

Despite of the lack of a silencer, the Walther LGV Competition Ultra air rifle is a very quiet. Indeed, this is subjectively the quietest non-silenced air rifle of this power that the HAM team has ever tested.

There was almost no evidence of spring twang when the Walther LGV Competition Ultra air rifle was fired offhand. As HAM tester Paul Manktelow commented in his notes ” there was just a solid thunk when firing this gun”.

Walther gives the LGV the tagline “The Sound of Silence”. This is not an exaggeration where the LGV Competition Ultra air rifle is concerned.

The Walther LGV Competition Ultra air rifle is clearly designed to be used with a scope as standard. However, it is equipped with a set of good-quality iron sights.

The rear sight is adjustable for windage and elevation, while both front and rear sights are fitted with bright fiber optic inserts. 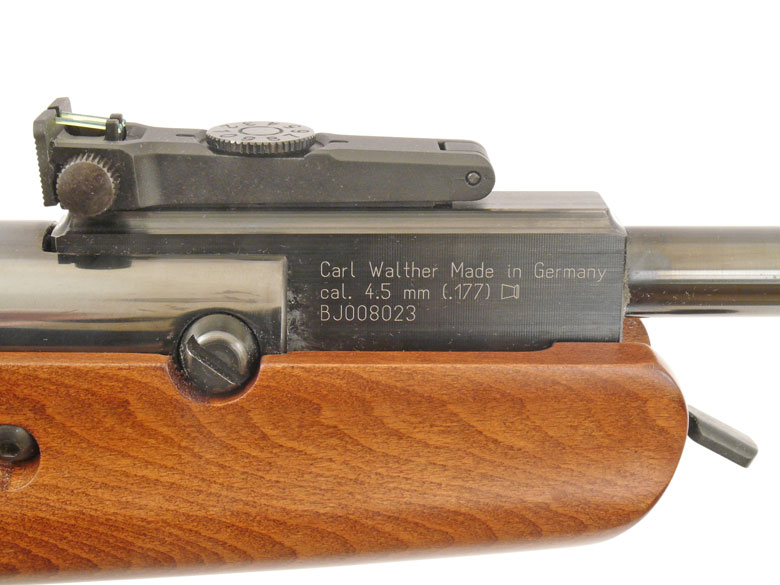 More importantly for most users, the compression tube is deeply grooved with a pair of scope rails and there are no less than three scope stop holes to allow the user maximum flexibility in scope placement.

HAM tester fitted his own Hawke scope for the test, as you can see from the photographs. It balanced well and complimented the overall handling of the LGV.

There’s no doubt that this is a heavy gun. Lots of steel and a chunky, dense wood stock ensure that. But the gun balances exactly over the natural “forward hand” position, so the weight is in the correct place and, so, easier to handle. Some HAM testers found the stock a little chunky for their liking, others felt it was just fine.

Without a scope installed, the automatic safety looks to be ideally-positioned at the end of the compression tube. However, there was very little space to push off the safety with the test scope in place. The “fat fingered” among us found it less convenient than we had hoped although, as always, familiarity made disengaging the safety a nearly automatic reflex action. 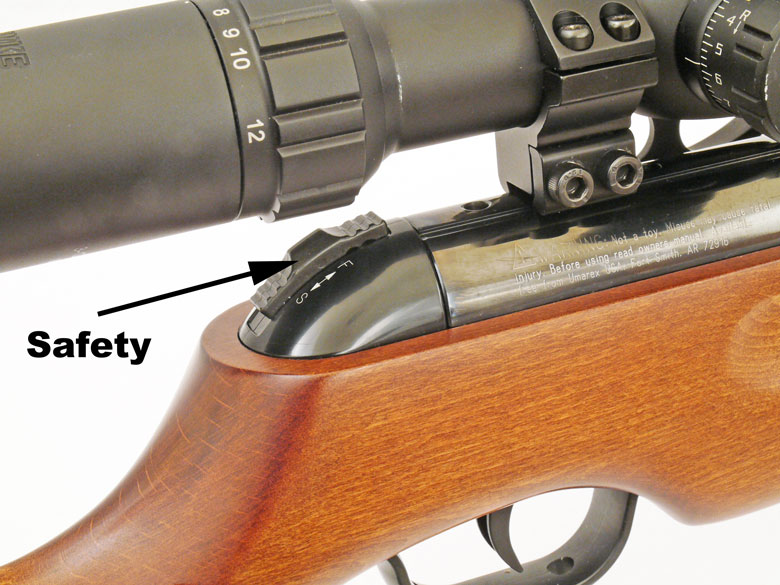 The stock’s adjustable comb made it easy to obtain the correct cheek weld with the Walther LGV Competition Ultra air rifle. This is a very important contributor to real, practical accuracy. As can be seen from the photograph below, there’s plenty of vertical travel to meet the requirements of just about any user and scope combination. 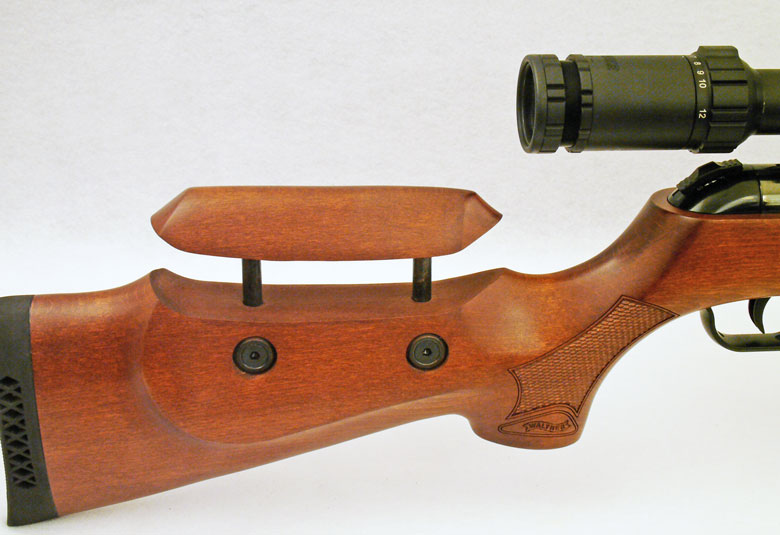 There’s just one other usability wrinkle with the Walther LGV Competition Ultra air rifle, although this, too, the HAM team learned to accommodate with experience. The breech seal O ring around the rear of the barrel sticks very proud from the rear of the barrel. This makes it quite difficult to load pellets, if you’re used to a flatter (normal) breech seal configuration. Persevere and you’ll get used to it!

The RateAGun Score is low (that’s good) for a spring/piston air rifle of this power level at 8.4 – another indication of the capability of this gun so long as the shooter can do his part!

Understated and in some respects plain, the Walther LGV Competition Ultra air rifle has a look that grew on the HAM team.

There’s no unnecessary shapes or flourishes. Every aspect of the LGV’s design is purely functional and elegantly executed. Finish of close-grained beech wood and blued steel is uniformly fine. Checkering is restrained just to small areas around the pistol grip, but is finely applied, with just the right amount of grip. 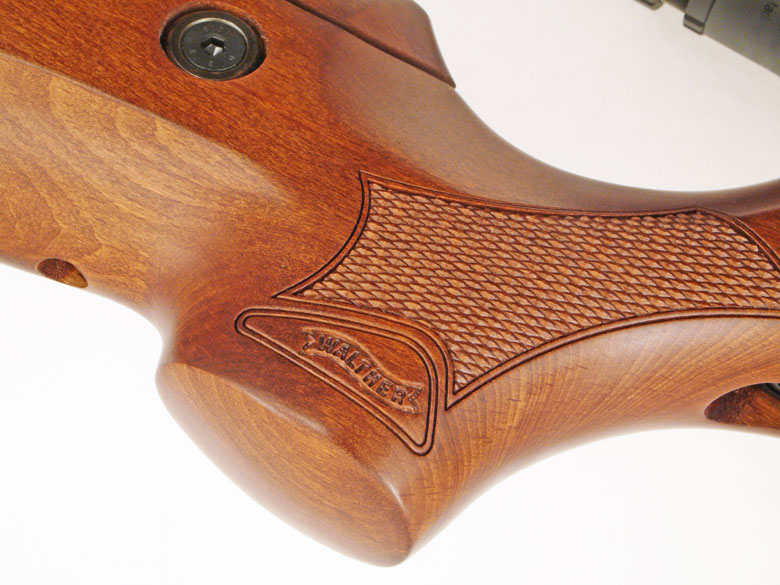 The Walther logo is a nice touch, too on both stock and compression tube.

Overall, the finish reinforces the impression of understated quality that you would expect to find throughout a gun of the pedigree of the Walther LGV Competition Ultra air rifle.

As a specialist product, you’re not going to walk into your local big box sporting goods store and find a Walther LGV Competition Ultra air rifle on the shelf. However, it can be found readily online from the usual specialist suppliers including Pyramyd Air, Airguns of Arizona and Airgun Depot. It’s also available direct from Umarex USA.

Note, however, that the price spread found online at the time of writing was surprisingly large – from about $670 to over $800. It’s worth taking some time to research your purchase before pulling the trigger on an LGV…

The Walther LGV Competition Ultra air rifle benefits from a limited lifetime warranty. Spare parts and service are provided by UmarexUSA for US customers.

The user’s manual supplied with the gun tested by HAM is in English only. It is well illustrated and gives practical and useful information on how to shoot and care for your airgun. The only obvious error is that the warranty is given as 12 months only.

Really, there’s little to do with the LGV except shoot it and love it! 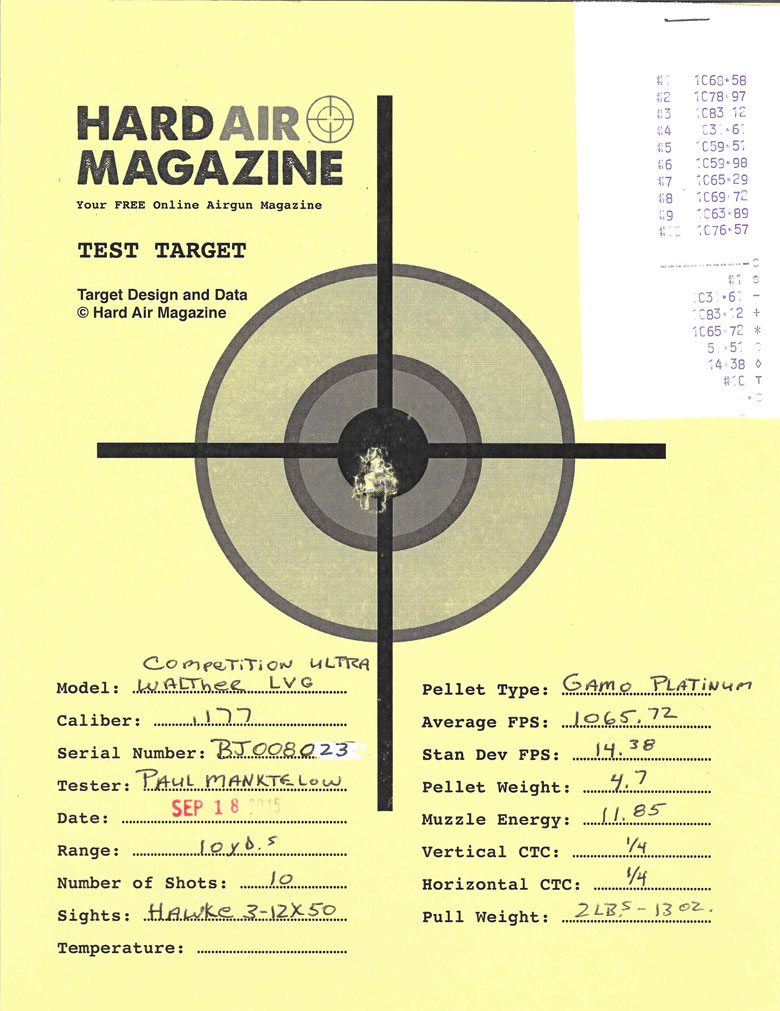 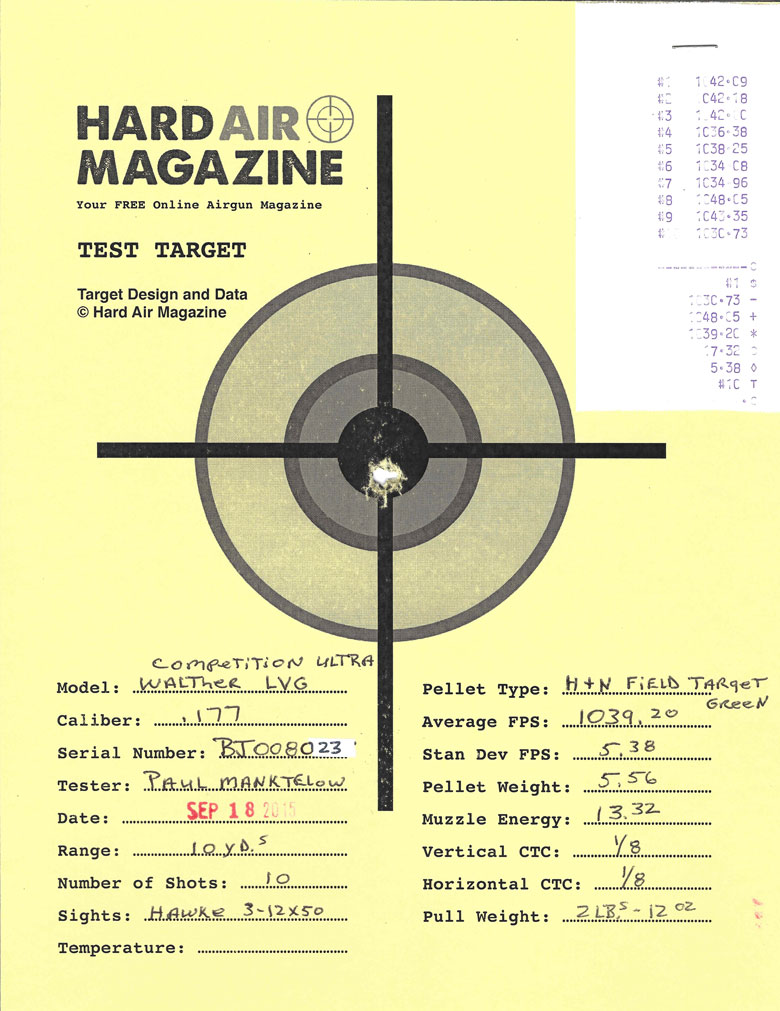 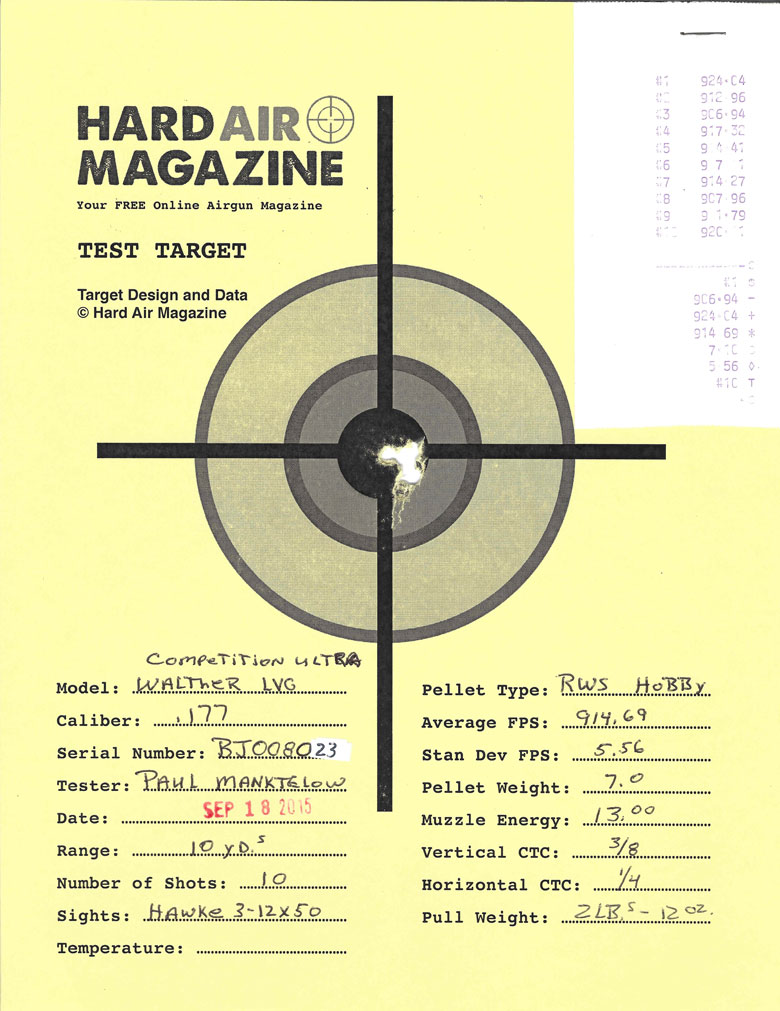 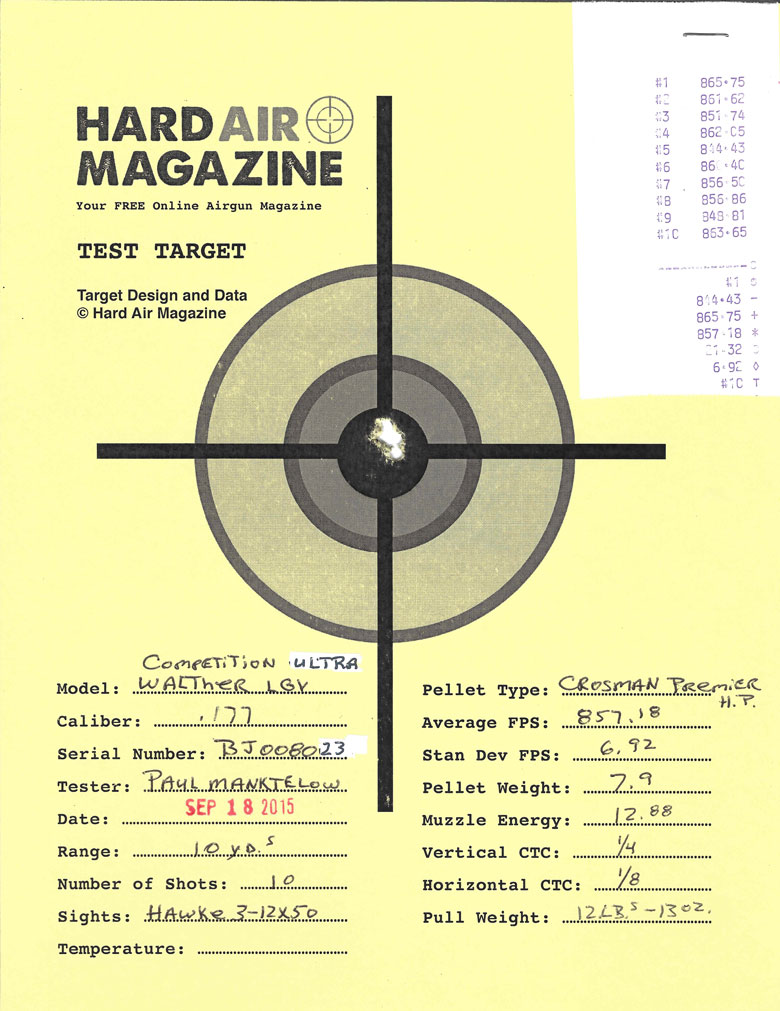 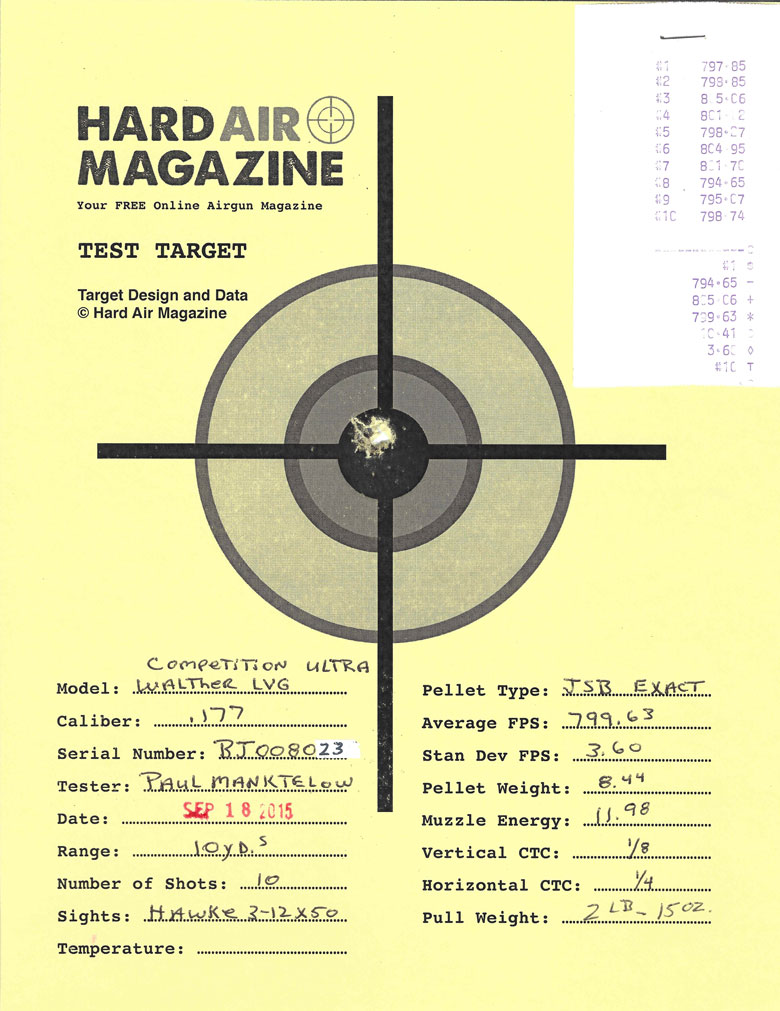 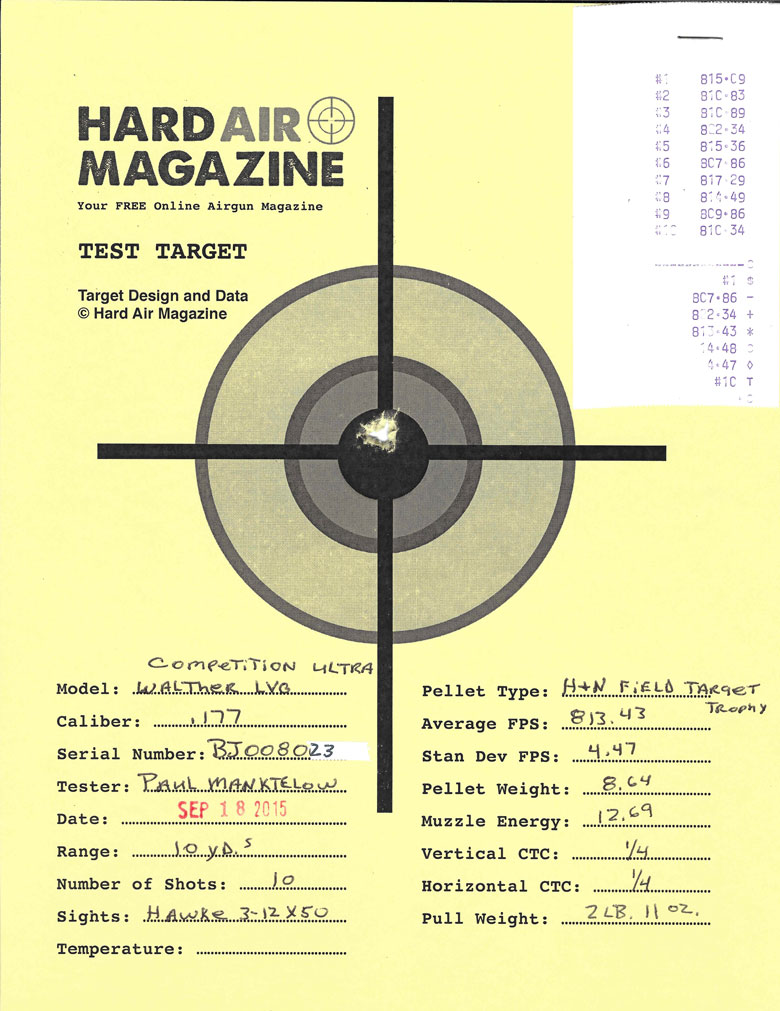 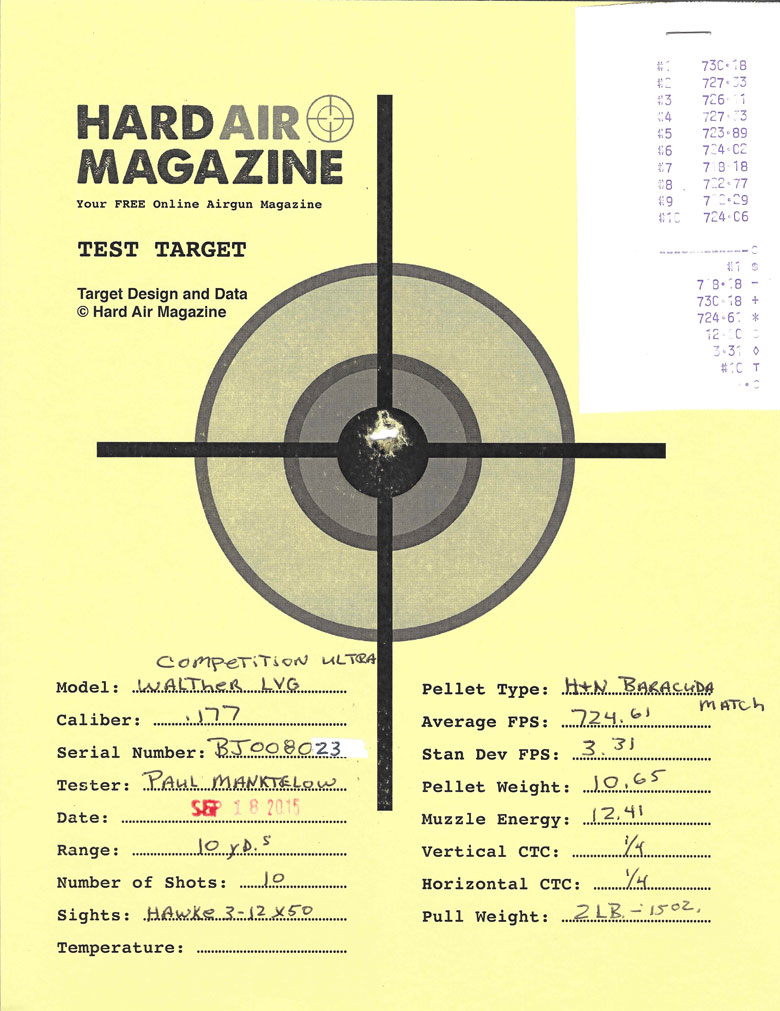