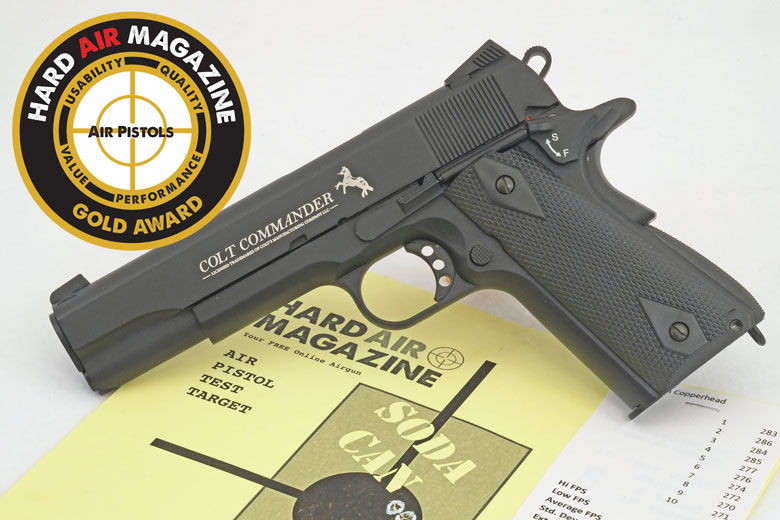 The Colt Commander CO2 BB pistol is all about blowback!

This gun gives one of the strongest blowback actions we've tested at HAM. The slide travel is very long and realistic and the shot count good. But it's purchased at the cost of a relatively low FPS and a lot of CO2 leakage.

This is a highly-realistic replica of the Colt 1911A1 firearm. As such it will be an ideal training and practice tool for owners of the firearm. It's also great fun for plinking at soda cans at ranges of 6 Feet or so.

The Colt Commander CO2 BB pistol gains a coveted HAM Gold Award for its performance in this test.

The Colt Commander CO2 BB pistol is a fully-functional replica of the 1911 pistol. It combines a strong blowback action and fair shot count with outstanding realism. 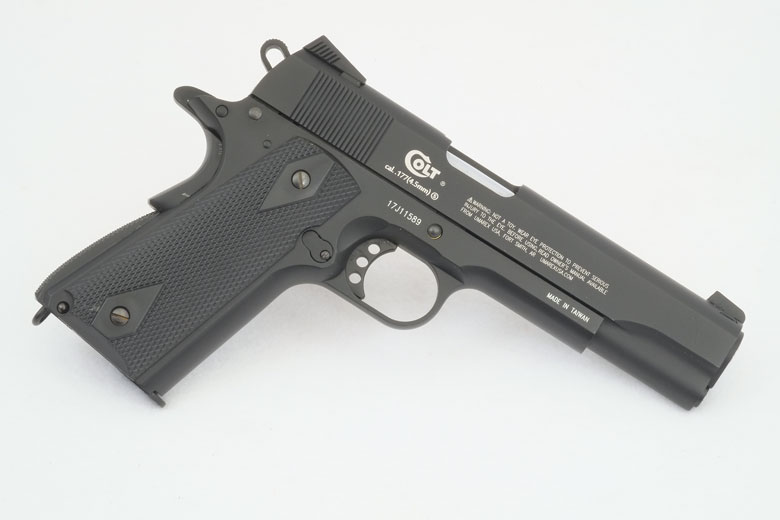 The level of realism displayed by the Colt Commander CO2 BB pistol is truly exceptional. Looks, weight, handling and feel are all identical to a 1911A1 firearm. Operation is also identical, with functional slide release, manual safety, grip safety and magazine release.

One valuable feature that’s by no means universal on CO2-powered blowback pistols is that the slide locks back when the magazine is empty. Again, exactly like the firearms original, of course. 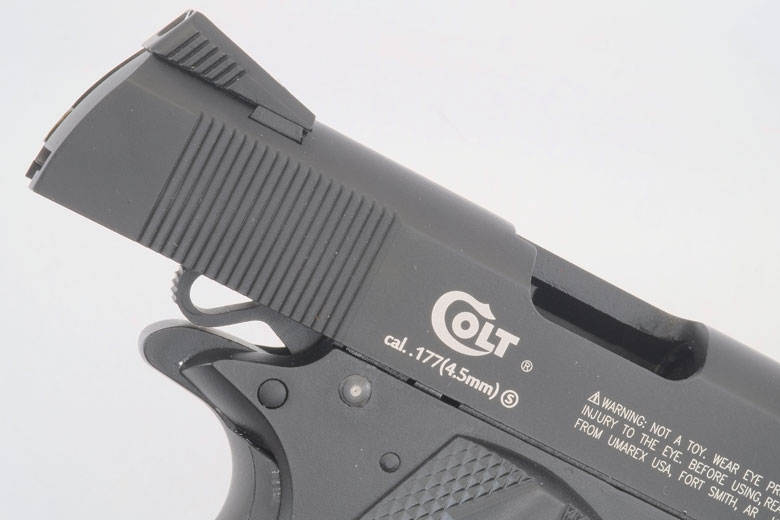 This is an all metal gun, only the grips are plastic. It certainly feels very good in the hand, handling and pointing just like the firearm.

To be very picky, the black grips of the Colt Commander CO2 BB pistol  are not commonly seen on black frame 1911s. Wood-effect, or at least brown grips would be closer to the “real thing”.

So the Colt Commander CO2 BB pistol  is not really correctly named. And the silver printing on the slide and frame stand out too much – as they do with just about all BB-firing replica air pistols. But that’s a fairly small price to pay given the outstanding overall realism in looks and feel demonstrated by this air pistol. 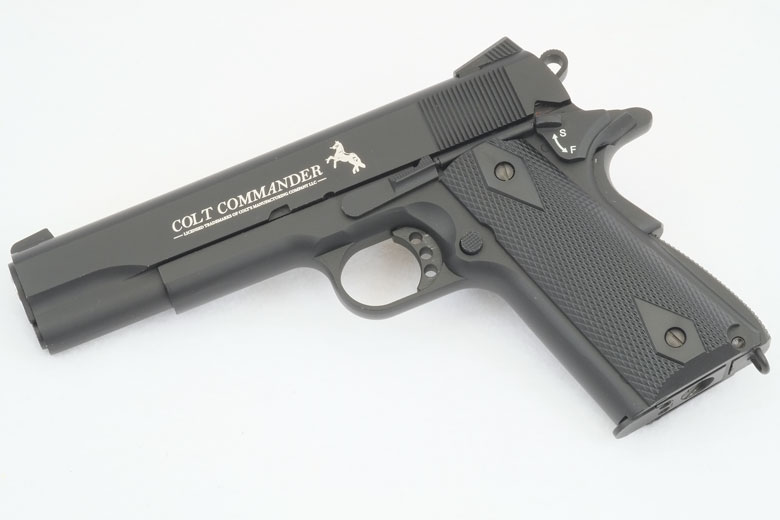 The CO2-tightening screw is also very well concealed in the base of the drop-free magazine, even if it does require an Allen (hex) wrench to open it.

Umarex does not claim that the Colt Commander CO2 BB pistol is field-strippable. However, it certainly looks like it should be and other products from the same manufacturer certainly are. But when Stephen Archer tried, he could not rotate the barrel bushing far enough clockwise to release the recoil spring – as would be the case with a 1911 firearm. Maybe this is just technique, maybe there’s an issue with this gun, or maybe he just needs to try an alternative technique…. 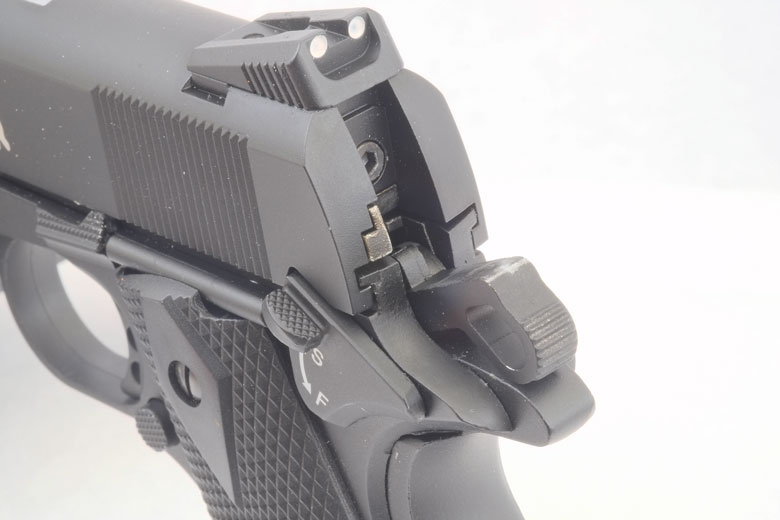 Accuracy of the Colt Commander CO2 BB pistol tested by HAM was generally “minute of soda can” good, at 6 yards. As the test targets below show, the pistol fired reasonably close to the point of aim. This is important as the sights are non-adjustable.

Best accuracy was demonstrated using Crosman Copperhead BBs in the Colt Commander CO2 BB pistol tested by HAM. However, the accuracy at 10 yards sadly fell outside the soda can, as you can see.

Overall, accuracy was not the best we have tested in a BB pistol. It is, however, good enough for use in its intended purpose of training, practice and plinking. 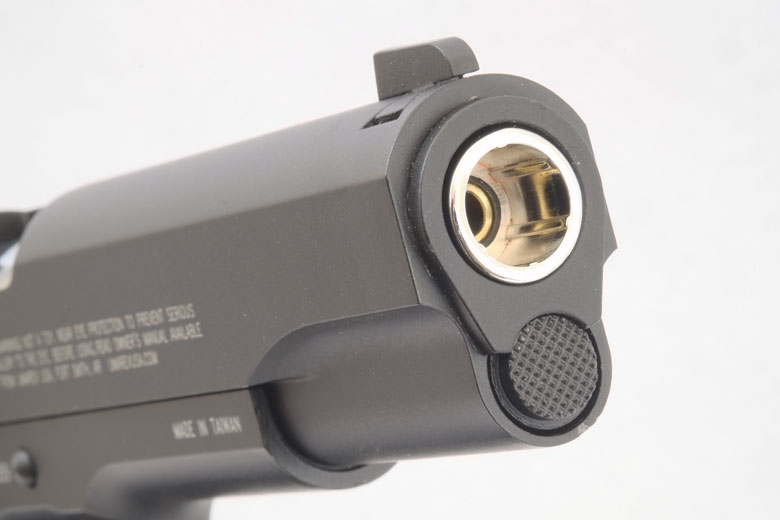 Maximum Muzzle Velocity for the Colt Commander CO2 BB pistol tested by HAM was an average of 283 FPS over 10 shots with Daisy Avanti BBs. As this testing was undertaken at a fairly cool 60 degrees F temperature, the FPS is lower than might be expected.

Extensive HAM testing has shown that FPS with CO2-powered guns increases by 2 FPS per degree F, this means that the Muzzle Velocity of the Colt Commander CO2 BB pistol will match the manufacturer’s claim of 325 FPS at 84 Degrees Farenheit.

As mentioned above, the claimed name is not a correct match for the Colt Commander firearm. However, most owners will probably not care about this.

The Colt Commander CO2 BB pistol tested by HAM demonstrated good consistency. The trigger pull weight varied by a maximum of only 3 Ounces either side of the 4 Lbs 8 Oz average figure.

Muzzle Velocity was also consistent in the 275 – 285 FPS range at 60 degrees F, irrespective of the BBs fired. And Standard Deviation – the statistical measurement of FPS variability in a string – was also very consistent at just 6 FPS. That’s a figure that many regulated PCP air rifles would be proud of!

Accuracy was also consistent with around 2-inch, 10-shots groups at 6 Feet – all except for the Crosman Copperheads which gave a tighter result.

The trigger has a very similar feel to that of a Colt 1911 firearm. And the pull weight is also just about identical at an average of almost 4 Lbs 8 Oz. The semiautomatic, single action operation is a great replica of the firearm. HAM Tester Doug Wall noted, “The trigger is right on.” 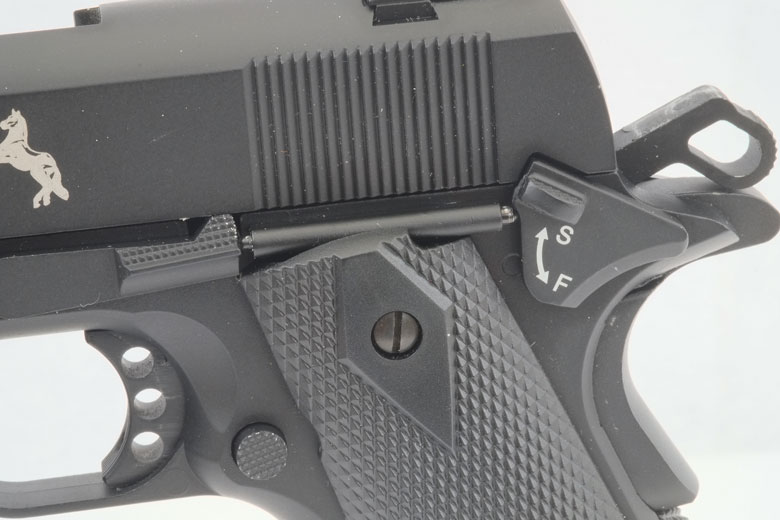 But it’s clear that the designers concentrated on making the blowback action the most significant element of realism for this air pistol. They certainly succeeded with that! But let’s talk a little about what they gave up in return…

As CO2-powered air pistols all use a standard 12 Gram CO2 cartridge for their power, they all have the same total amount of power available for use. This might be obvious, but it means that designers make choices about how they use that available power.

That 12 Grams of CO2 has to propel the BB (or pellet) at a claimed maximum FPS, operate the blowback (if fitted) and then give a certain number of shots per fill. This means that non-blowback CO2-powered BB pistols generally have a higher shot count and FPS than blowback models, because there’s no demand for CO2 to operate the blowback action. 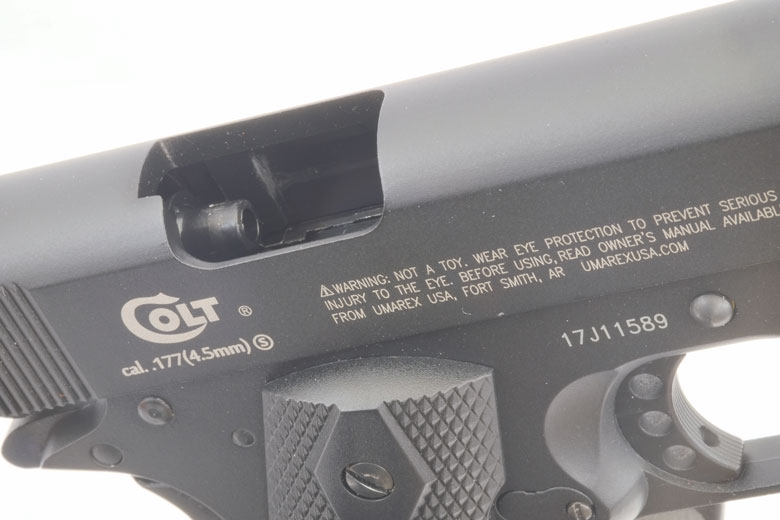 It’s clear from this comparison that the designers of the Colt Commander CO2 BB pistol made different performance choices from those selected by the designers of the SIG SAUER 1911 Max Michel, for example. Gaining an extra 13 mm of travel from that heavy slide cost 66 FPS and 4 shots per fill.

Comparing the Colt Commander CO2 BB pistol to the M&P40 from the same factory shows that 10 extra mm of slide travel (against the M&P40’s lighter slide) cost 19 FPS, although they also gained an additional 18 shots per fill.

What’s the best result? That’s entirely your choice as a customer. We just need to recognize that no single CO2-powered replica air pistol is going to have the best blowback, highest shot count and best FPS all in one package. That’s clean against the laws of physics!

The Colt Commander CO2 BB pistol tested by HAM gave a total of 64 shots from one 12 Gram CO2 cartridge. This is a decent shot count for a blowback BB pistol, particularly for one so dedicated to realistic blowback operation as this gun is.

Muzzle Velocity was still over 200 FPS – actually 206 FPS – at shot 61. This was down from 280 FPS for the first shot, but dropped off very rapidly after this. So, you’ll probably want to think of changing CO2 after three magazines of 19 BBs each. 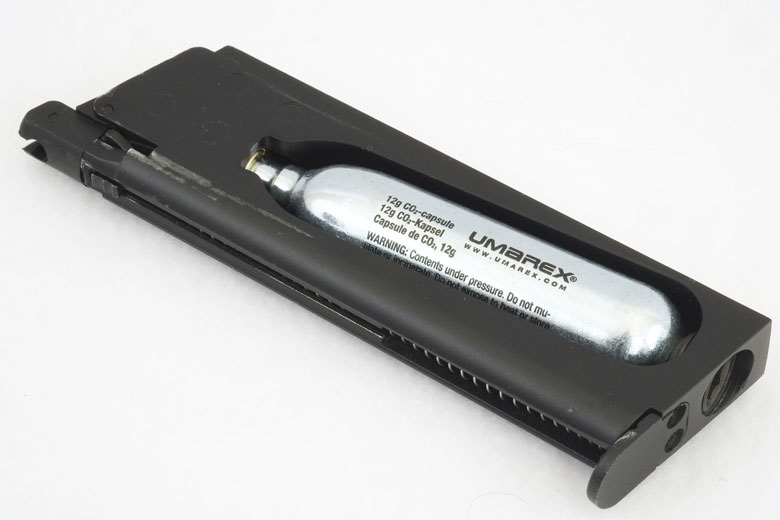 As discussed, Muzzle Velocity for the Colt Commander CO2 BB pistol is fairly low compared to that claimed for other BB-firing blowback pistols. The tested FPS results are shown below, but please also note the low ambient temperature of 60 degrees F and the notes in the Comparison To Makers Claims section above.

As with all CO2-pistols, rapid fire will cause the CO2 to cool and FPS to drop. If you can bring yourself to shoot this Colt Commander CO2 BB pistol fairly slowly, you will be rewarded with more consistent velocities and avoid possible vertical stringing on the target.

Appearance and finish of the Colt Commander CO2 BB pistol is very good indeed. All external parts are perfectly cast and/or machined. As usual with CO2-powered replica pistols, metal finish is by powder-coating rather than bluing. However, this is not a major issue and bluing would almost certainly require a significant increase in the price of the gun.

The barrel has an attractive chrome-effect finish which offsets the overall black color scheme well. 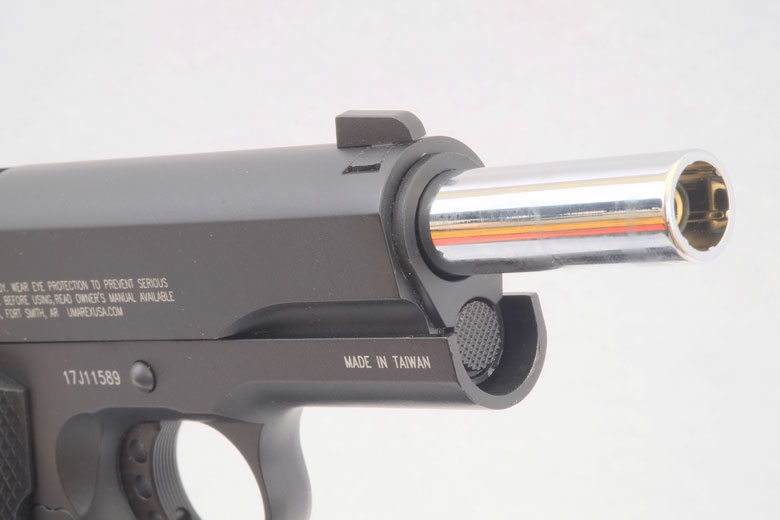 The Colt Commander CO2 BB pistol is readily available from the usual sources including Pyramyd Air and Airgun Depot. It is also available at some big box sporting goods retailers, as is apparent from the clam shell plastic packaging.

As usual with Umarex products, the Colt Commander CO2 BB pistol has a very short 90-day limited warranty. However, as the valve assembly in built into the drop-free magazine, this means that valve issues – should they occur – can be fixed by buying a replacement spare magazine.

The Umarex Owner’s Operation Manual supplied with the gun give information in English, French and Spanish. It’s clear and well-illustrated. However, it advises that BBs be load through the top of the magazine. HAM found this was only possible if each BB was forced down into the magazine using a screwdriver blade!

The easier way is to pull the BB follower right down, then pour the BBs into the opening created. This is a much quicker and easier method of loading BBs into the Colt Commander CO2 BB pistol. 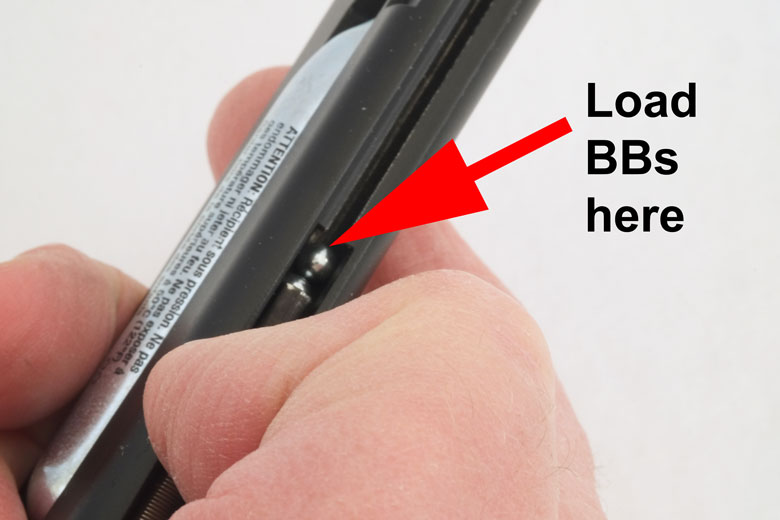 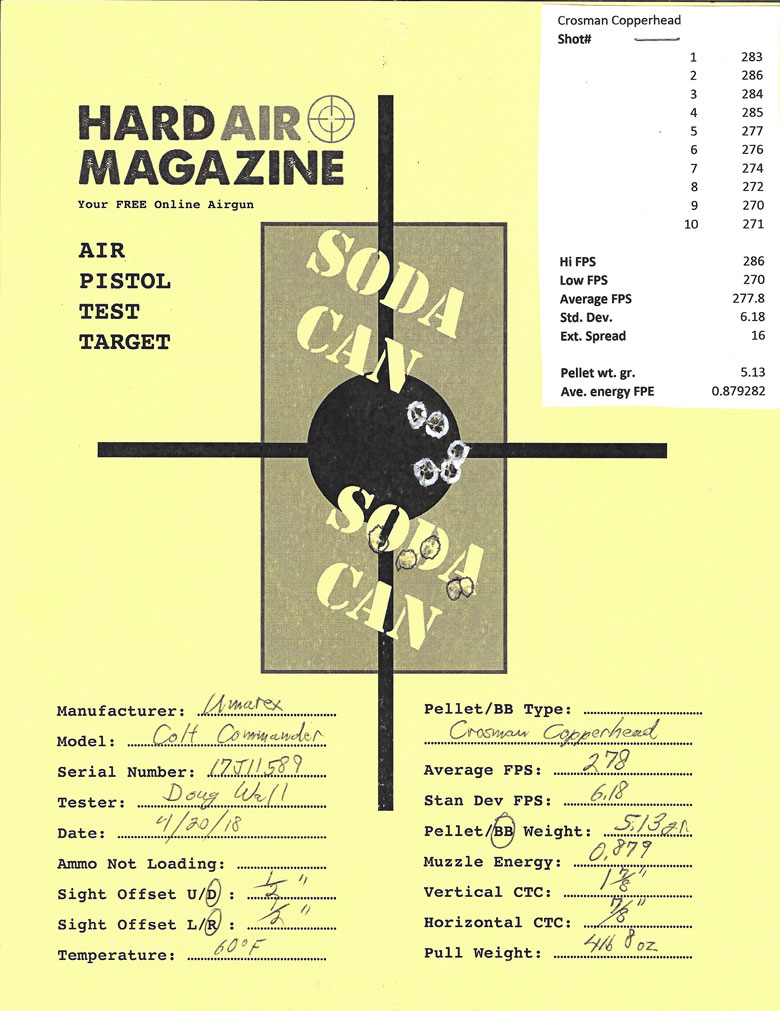 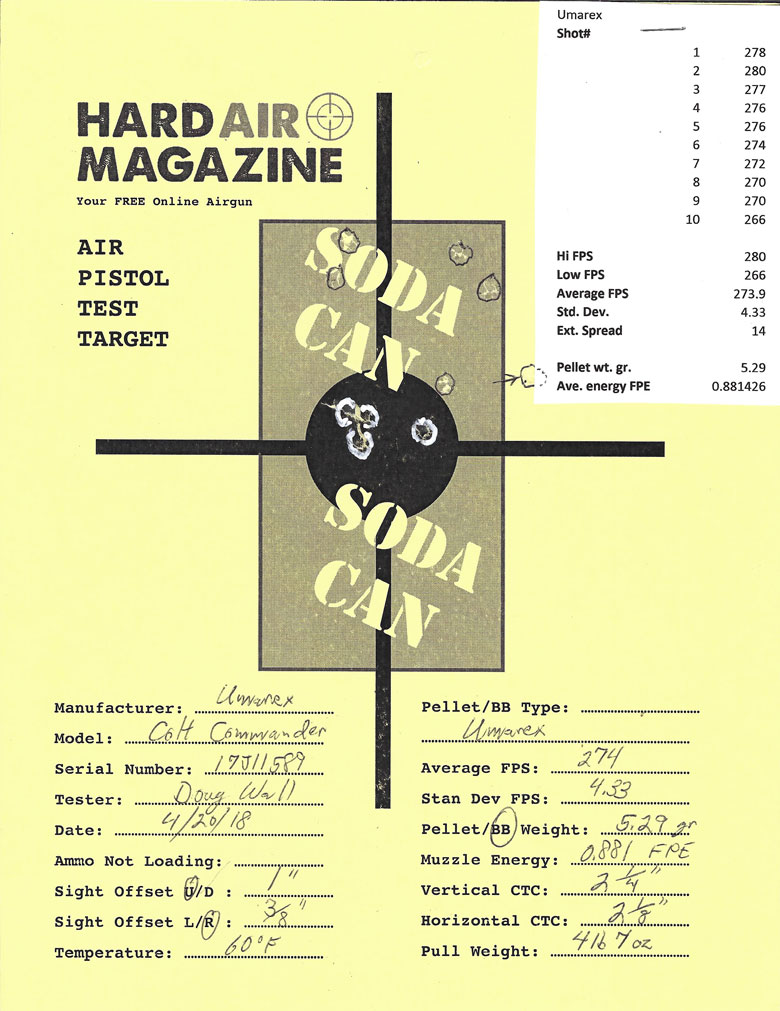 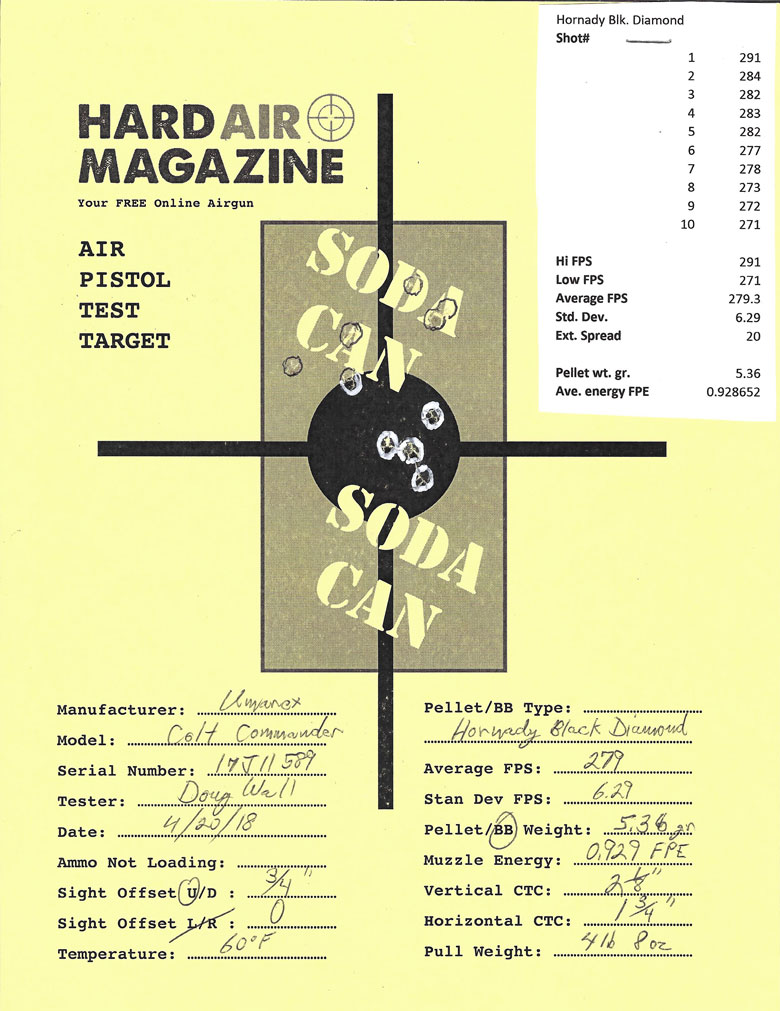 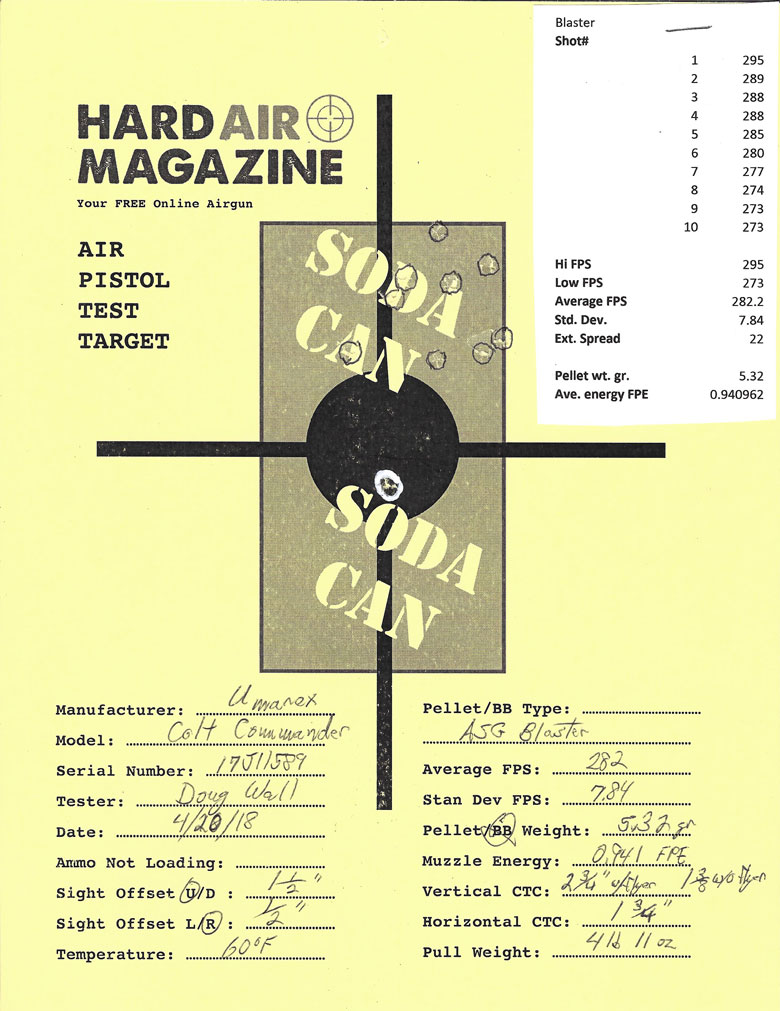 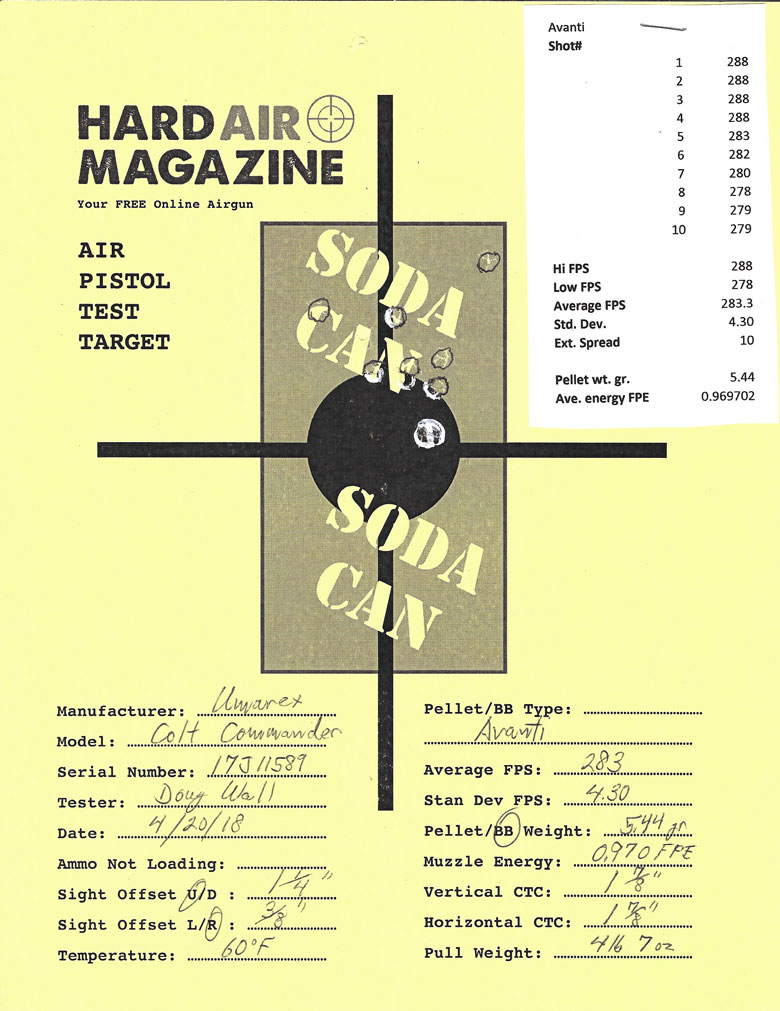 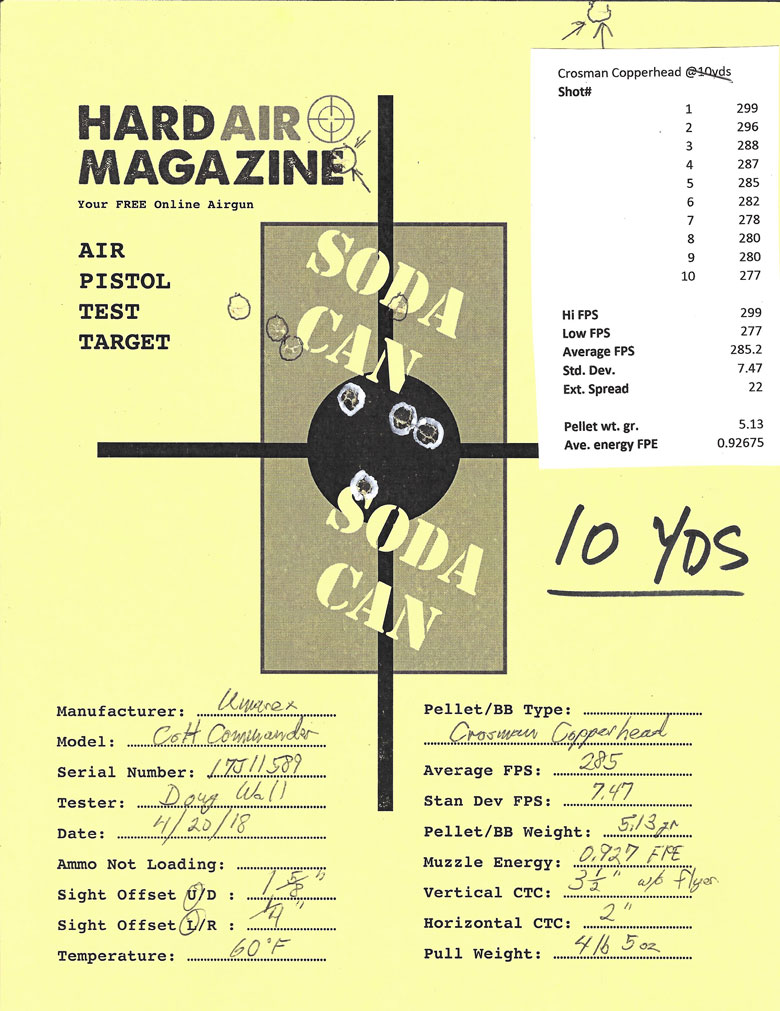