The Crosman Custom Shop regulated Marauder gives a good blend of accuracy, shot count and power for the price.

The combination of Custom Shop options and built-in tuning flexibility make this PCP air rifle easy to customize as "your own" in a way that's not available elsewhere. That's a great attraction to many airgunners.

Overall, this is a strong performer at a fair price. For this, the Custom Shop regulated Marauder earns a coveted HAM Gold Award.

As the Crosman Custom Shop regulated Marauder is available in a variety of configurations, the price is somewhat variable. However, the gun tested by HAM is expected to sell for a little under $640.00.

Considering that the Crosman Custom Shop effectively allows you to configure the Marauder to your own specifications (obviously within limits), this is a fair price in the HAM Team’s assessment. However, it is $140 more that the current Street Price of a stock unregulated Marauder.

Is it worth it? We say yes and applaud Crosman for giving their customers the choice.

In “as tested” condition – including the Center Point Spectrum first focal plane scope and rings – the Custom Shop Regulated Marauder has a Street Price of about $795.00.

The maximum recorded with lead pellets was 893.62 FPS, achieved as expected, by the 11.9 Grain RWS Hobbys.

Most knowledgeable shooters will choose to use mid-weight, or heavier, domed lead pellets with the Crosman Custom Shop regulated Marauder, however. In this case, 14+ Grain pellets give a very respectable 830 – 840 FPS Muzzle Velocity.

Although these figures are fine in themselves, they trail the FPS numbers of the unregulated Marauder HAM tested by around 100 FPS for most pellets. This makes a significant difference in Muzzle Energy (the measure of “knock down” power) between the two models, as the chart below shows, particularly with heavier pellets. 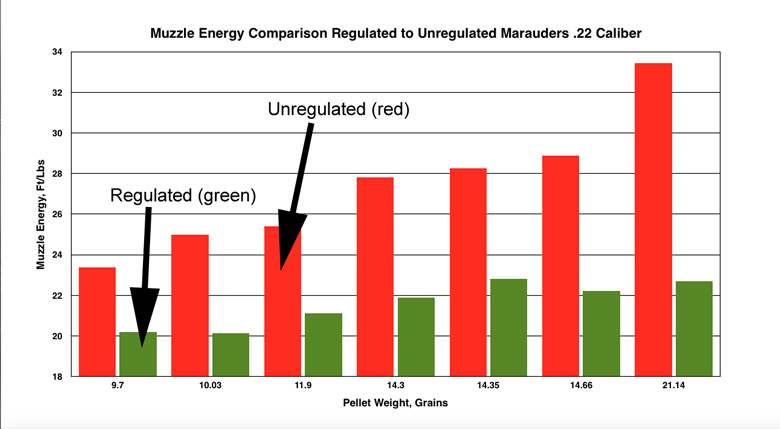 So clearly Crosman has made a trade-off between consistent FPS and outright power in the regulated Marauder. This is obviously why the unregulated version remains available.

Hunters who make few shots but want them powerful will choose the unregulated model. Shooters who value consistent FPS for a considerable number of shots will prefer the regulated Marauder.

Custom Shop air rifles ship with an accuracy test target produced at the factory. This is the one for the Marauder reviewed here. It’s a 5-shot group at 10 yards. 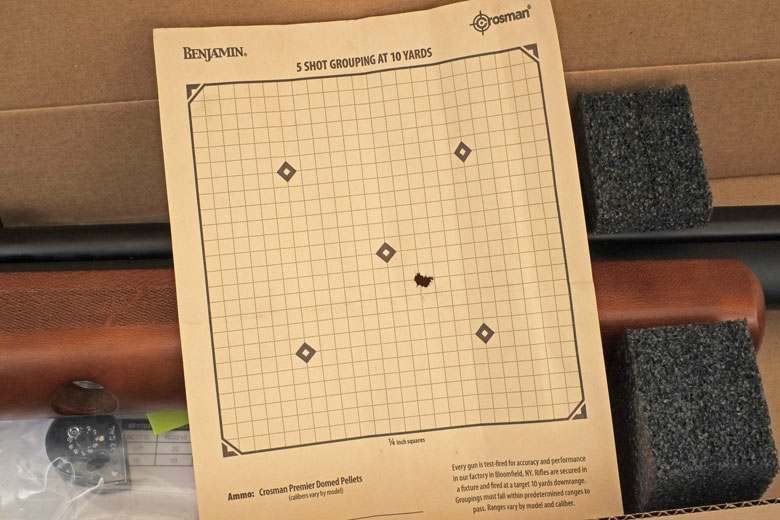 Accuracy with the Crosman Custom Shop regulated Marauder tested by HAM was excellent with all pellets of 14.3 Grains and heavier weight. Best performance was achieved by the Crosman Premier Hollow Point pellets, with a genuine “one hole” group at 10 yards.

Moving out to 25 Yards, this 10-shot group was excellent with the Premiers. That’s also about the limit of tester Stephen Archer’s capabilities! 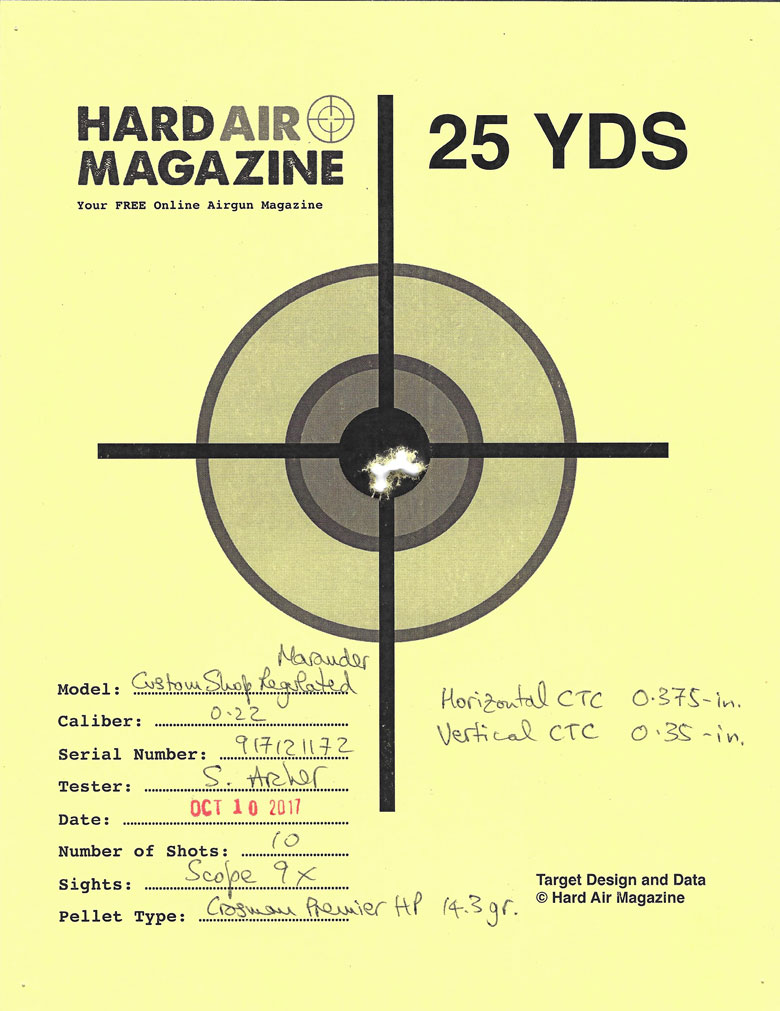 Although Crosman has announced that Custom Shop Marauders will have the option of a Lothar Walther barrel in future, the accuracy achieved by the Crosman barrel in this regulated Marauder was certainly very good indeed.

Like all world-class manufacturers, Crosman employs a strategy of continuous improvement. The performance of this air rifle shows that this clearly has been extended to the in-house barrel manufacture!

The trigger and bolt action of the Crosman Custom Shop regulated Marauder are the same as that of the regular version.

The two stage trigger is crisp and the let off positive, making shooting a pleasant experience. This is a good trigger and if you want to make adjustments, Crosman describes how in the Owner’s Manual. There’s simple setscrew adjustment for trigger pull weight, trigger blade position and changes to the first and second stages. 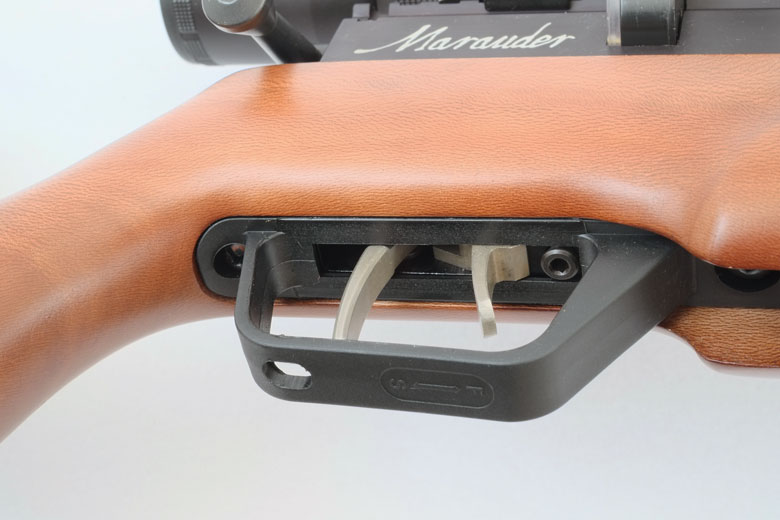 Trigger pull weight for the  Crosman Custom Shop regulated Marauder tested by HAM averaged around 2 Lbs 10 Oz out of the box. The manual safety is conveniently positioned directly in front of the trigger.

As Crosman indicates in the User’s Manual, to make changes to the trigger settings, go slowly. Keep testing the results so that you understand the effect of the changes you’re making. And double-check to ensure that the trigger does not become unsafe and produce accidental discharges. That’s potentially very dangerous!

As expected, bolt operation is fairly light with a cock on opening action. The design of the Marauder means that it’s easy to provide a left-handed bolt handle. It’s likely that this option will be available when the Marauder Custom Shop is opened.

The manufacturer claims that the Crosman Custom Shop regulated Marauder will achieve 80 shots at 850 FPS in .22 caliber. As you can read below, the gun tested by HAM gave 80 shots at an average of 855 FPS with good consistency using 13.43 Grain pellets. Very good.

This is what the Crosman Custom Shop regulated Marauder is all about!

Over 80 shots, the average Muzzle Velocity was 855 FPS with these 13.43 Grain JSB Exact Jumbo RS pellets. 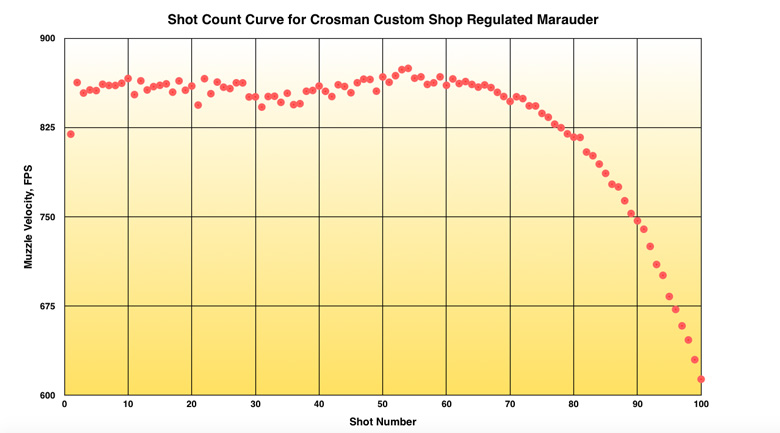 One unusual fact about the Crosman Custom Shop regulated Marauder is that the first shot or two after re-filling to 3,000 PSI pressure were much slower than the remaining shots before air pressure had dropped to the regulator setting of 2,000 PSI.

This is shown in the chart above and in the Chrony prints attached to some of the Test Targets below.

Unsurprisingly, it matched the regular Marauder HAM tested some time back in our subjective testing. This makes it one of the quietest air rifles around and very backyard friendly. 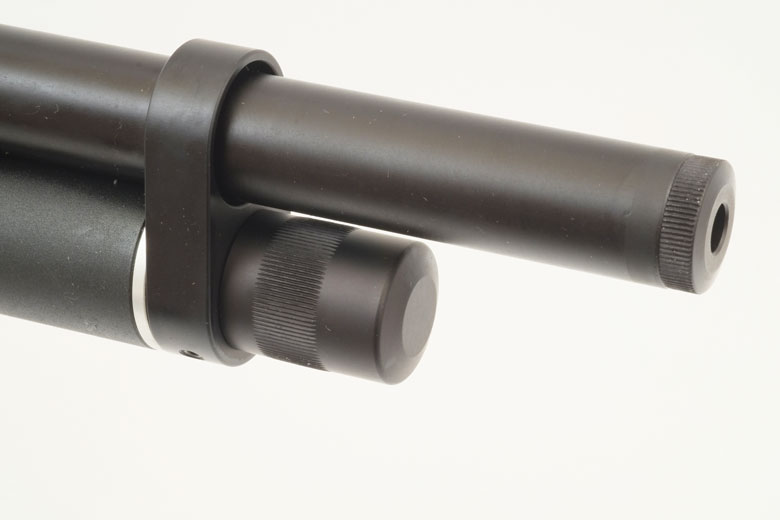 As is (fortunately) common with most air rifles above about $300, the Crosman Custom Shop regulated Marauder is supplied without a bundled scope. There are no iron sights, so a scope is essential, but you have a completely free choice of optics to mount on the gun.

Crosman supplied one of their new Spectrum first focal plane scopes with the regulated Marauder for this test review. It worked well and HAM will give more details in a separate review in the future. 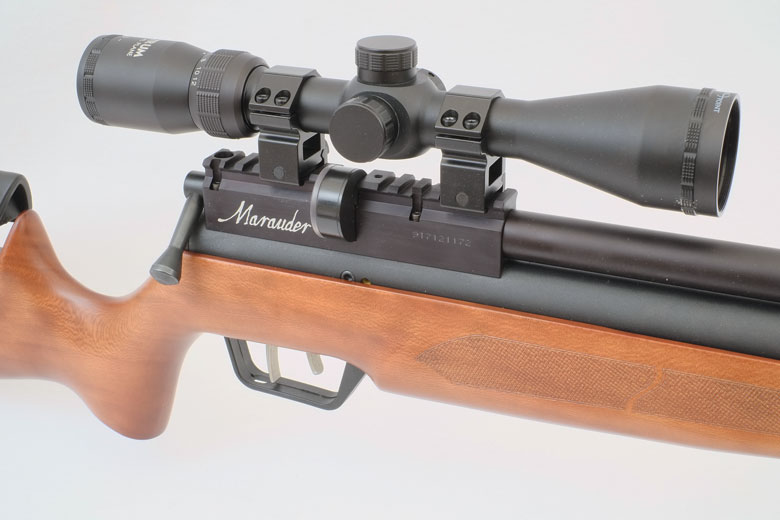 For many people, the Benjamin Marauder air rifle’s 10 shot clip remains a great benefit, although of course, well-priced magazine-fed PCPs are now much more common than they were when the Marauder was first introduced.

The Marauder magazine is easy to load and has a window that indicates the number of shots remaining. This is an excellent feature that is still not matched on even some very high-end PCPs. 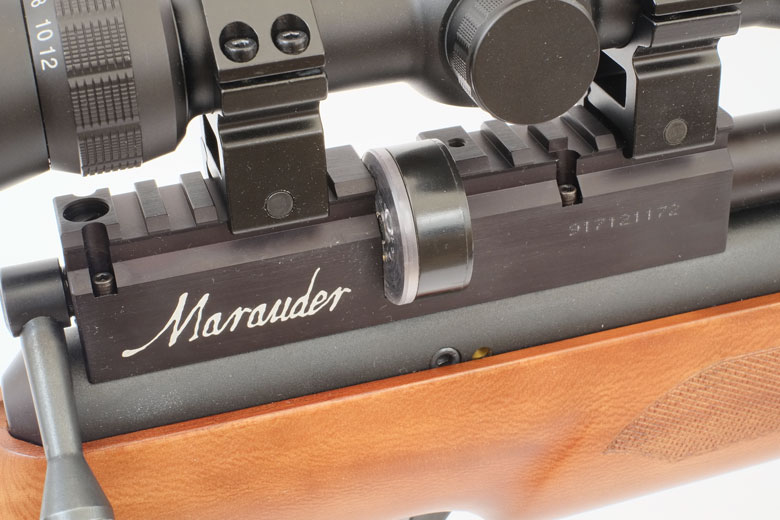 And as with most magazine-fed PCPs, there’s no double feed protection with the clip, such as you find in firearms. Remember if you’ve chambered a pellet as there’s nothing to stop you loading another behind it. The result is either a “double shotted” discharge or – if you’re unlucky – a jam that can be difficult to clear.

Note that alloy pellets were very rough to load in this gun. Given the enclosed design of the Marauder’s clip and breech system, we’d steer clear of lead free pellets in this air rifle for fear of jamming.

Aftermarket single-shot trays are available, should you wish to load the regulated Marauder with one pellet at a time.

The adjustable height stock comb makes it easy to set up a good cheek weld that’s personalized to your physique and the scope/mounts you’re using. As a good cheek weld is important for consistent accuracy, this is a very good feature of the Marauder. Adjustment is simple using a 3/32-Inch hex wrench (not supplied with the gun). 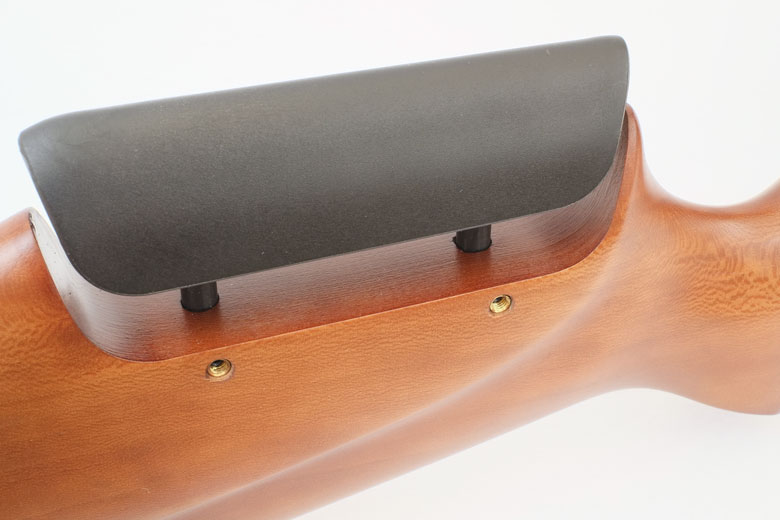 The Marauder has sling swivel studs built into the buttstock. Given the weight of this air rifle, you’ll want to add a sling if you plan on carrying the Marauder for any length of time.

The Crosman Custom Shop regulated Marauder has a longer air tube than the regular model. This means that handling somewhat more muzzle-heavy than the regular Marauder. However, it’s not bad, particularly if your preference is for the point of balance to be further forward.

Overall, this is an easy air rifle to shoot. There’s practically no recoil and no special hold is required to obtain accurate shooting. That means it’s very easy to shoot well.

Looks are, of course, a personal opinion. The HAM Team’s take is that the Marauder has never been a beautiful air rifle. But we do think the Crosman Custom Shop regulated Marauder looks better than its’ predecessors.

This is due largely to the new and more stylish wood stock. There’s more shape to it, with a deeper ‘belly” ahead of the trigger guard and the slight suggestion of a flared Schnabel tip to the forearm of the stock. And the wood is more pleasant on the eye too, with some pleasant and delicate figuring on the example tested by HAM. 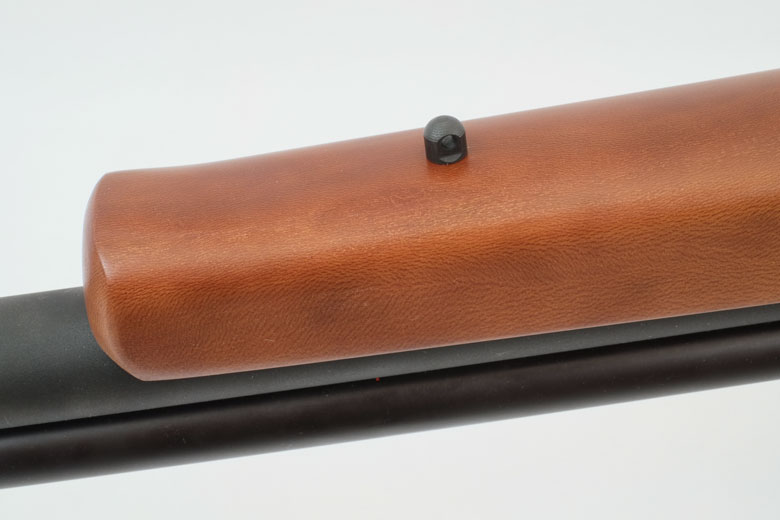 Finish remains workmanlike and functional. The review gun features a new finish to the HPA tube that Crosman tells us is being introduced for all Marauders and Armadas.

This new HPA tube has a bead-blasted finish that is then blued. It’s functional and looks good. Crosman tells us that it also makes the tubes stronger. 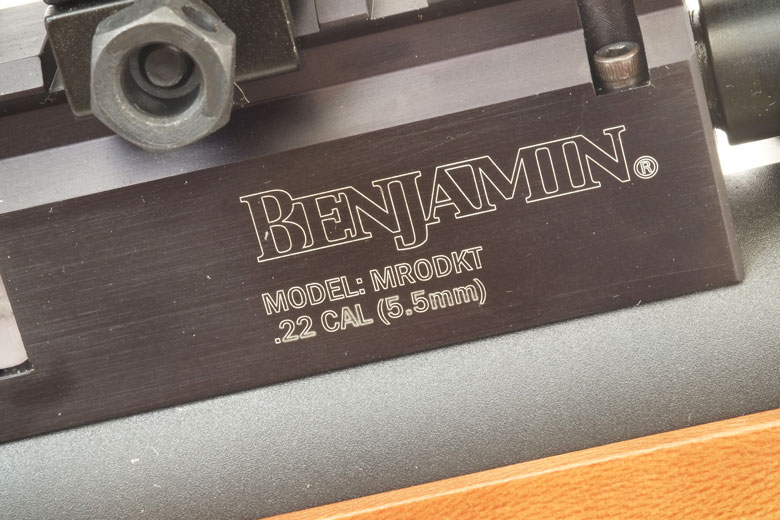 Crosman provides a 12-month warranty and has a full range of spare parts available if required, together with downloadable parts diagrams and post-warranty backup support from the range of Crosman Authorized Repair Centers. This level of long-term support is a benchmark for the airgun industry.

To overcome the “slow first shots” phenomenon after filling with air, HAM suggests that the Crosman Custom Shop regulated Marauder is dry fired (that is, with no pellet in the gun) 2 or 3 times after filling to 3,000 PSI. That does the gun no harm and will mean that you start shooting at the consistent, regulated Muzzle Velocity. 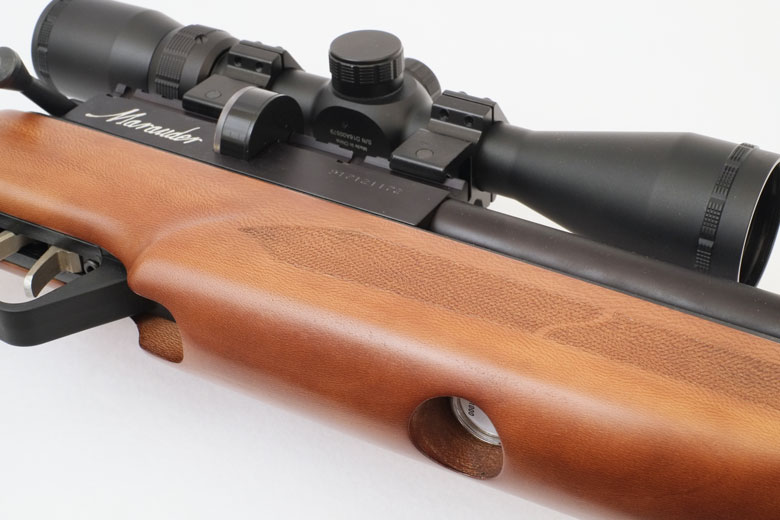 HAM tested this Crosman Custom Shop regulated Marauder with factory settings, but adjustment of the hammer spring tension, striker length and valve port size are all easy to do using set screws.

Most people want to increase the Muzzle Velocity at the expense of shot count. But it’s easy to end-up with a combination of well-intentioned adjustments that actually reduce the performance of the gun!  So understand that, if you want to tune your own Marauder, you need a chronograph to measure the Muzzle Velocity – and to know what you’re doing… 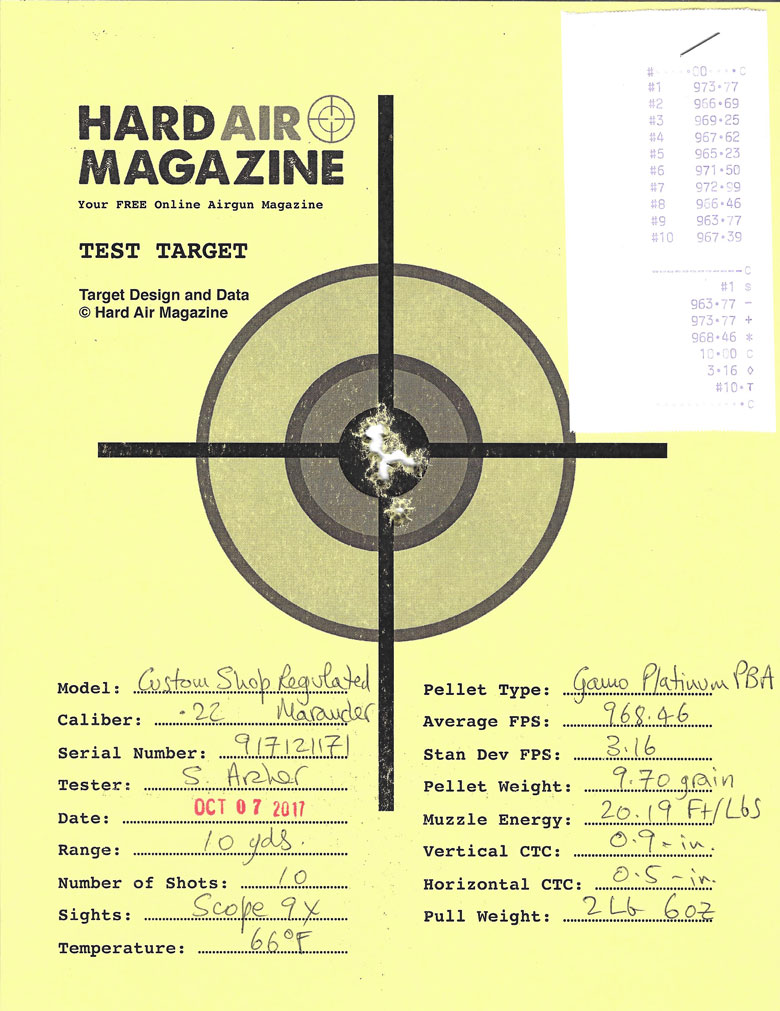 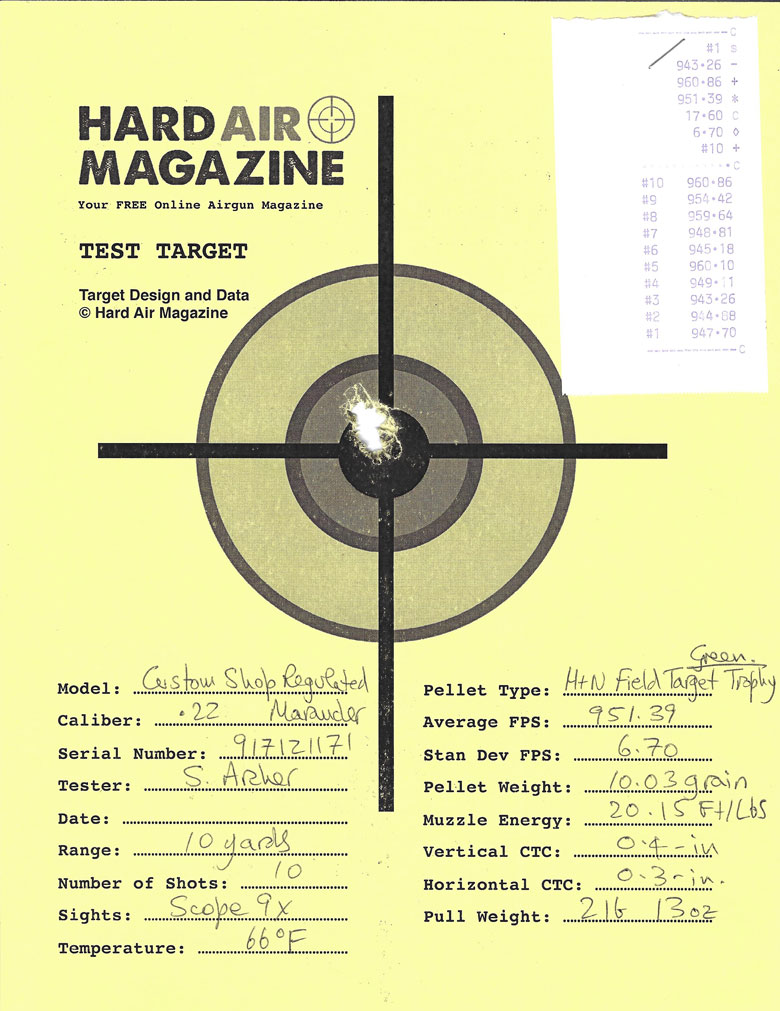 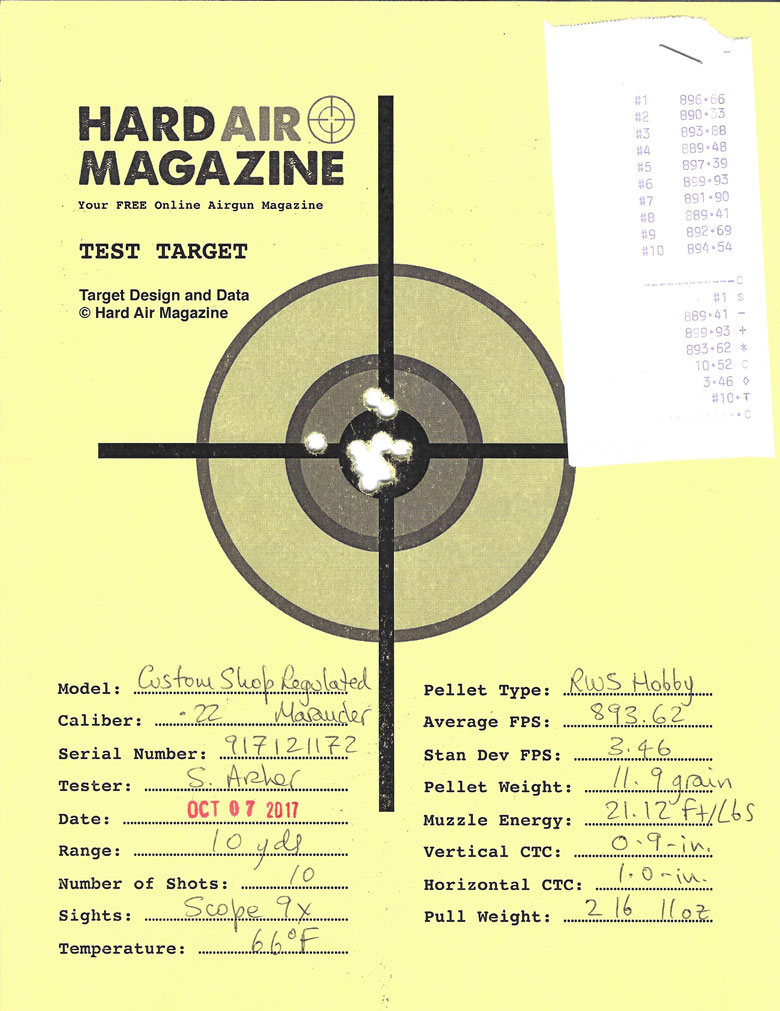 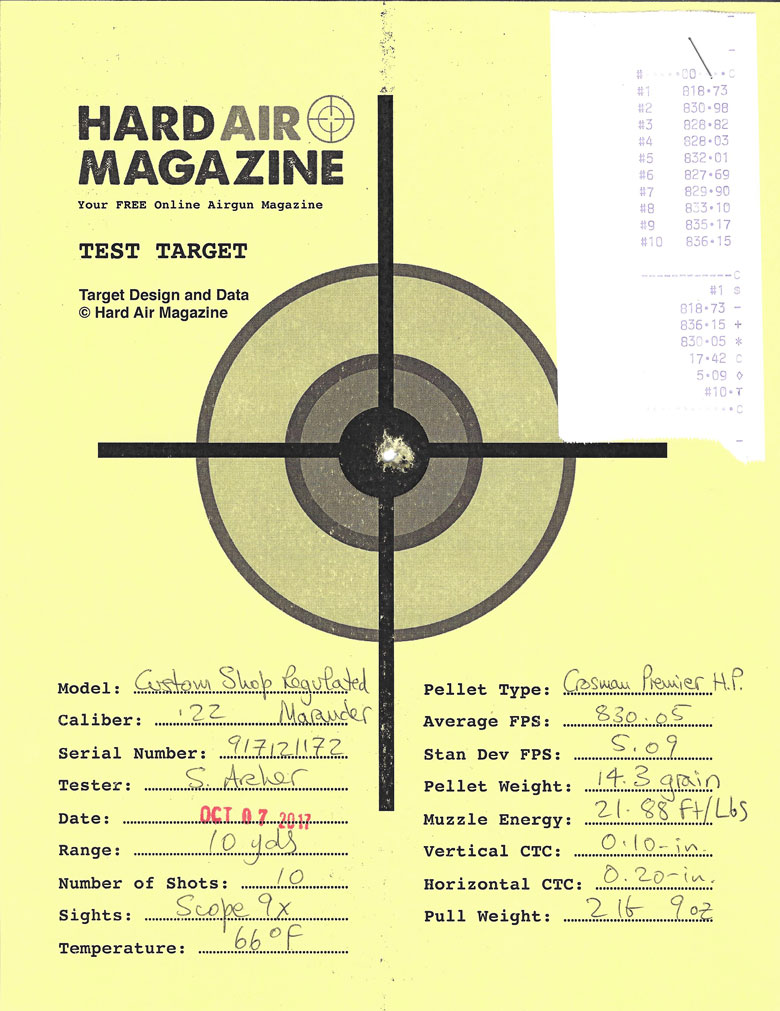 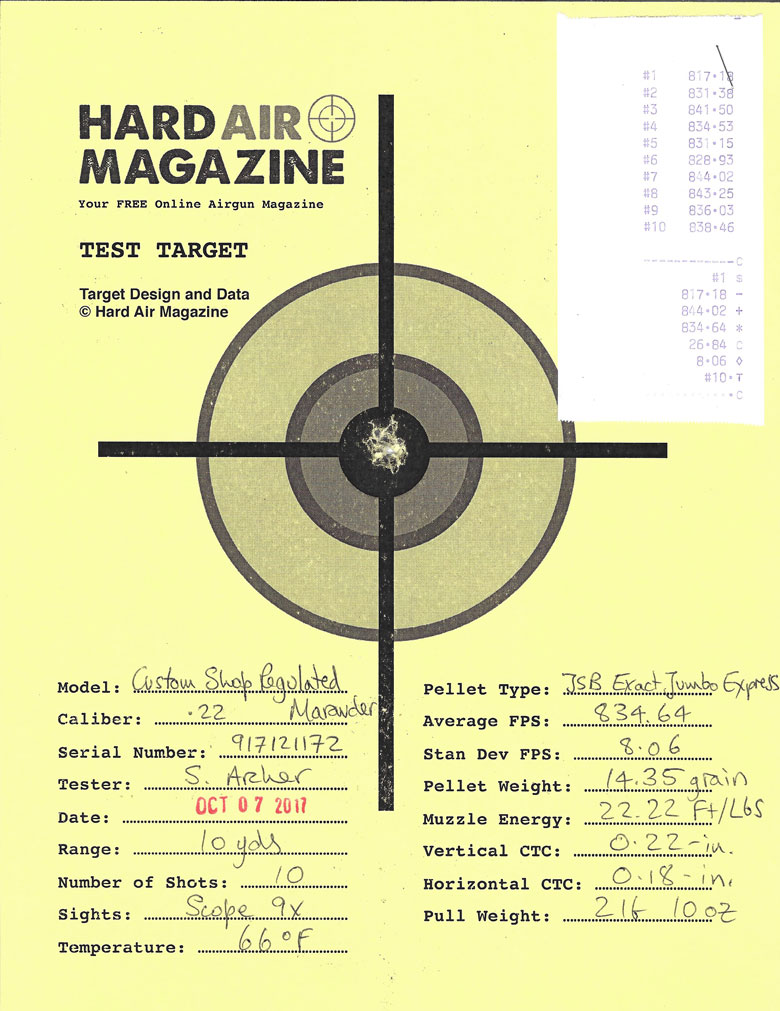 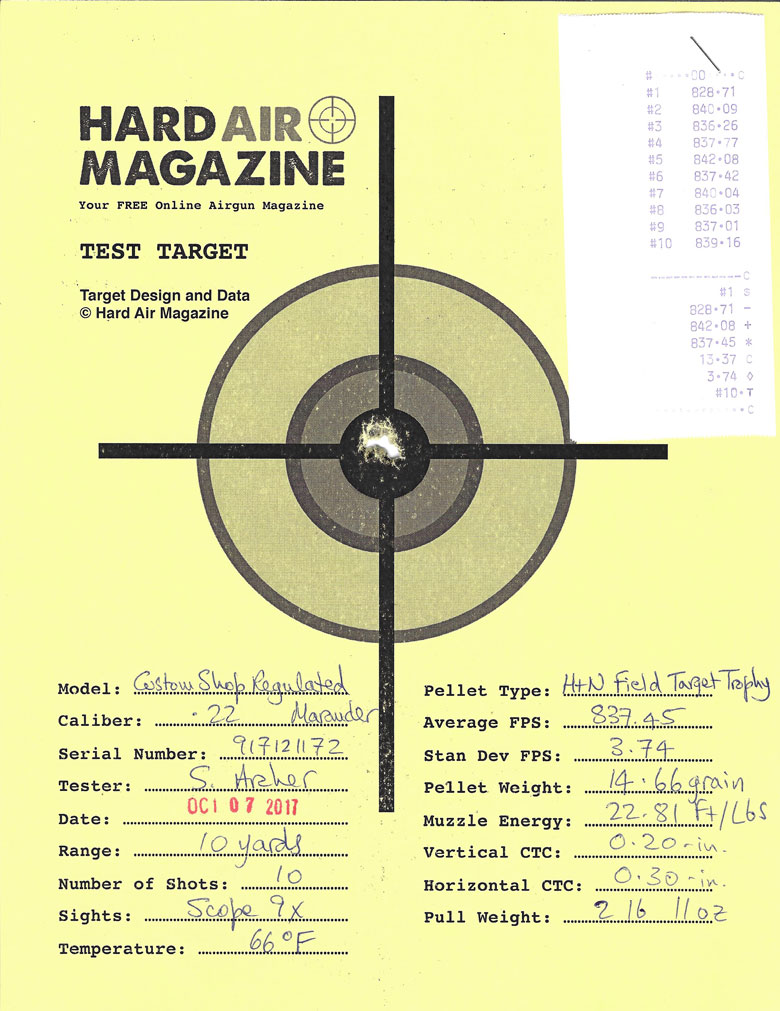 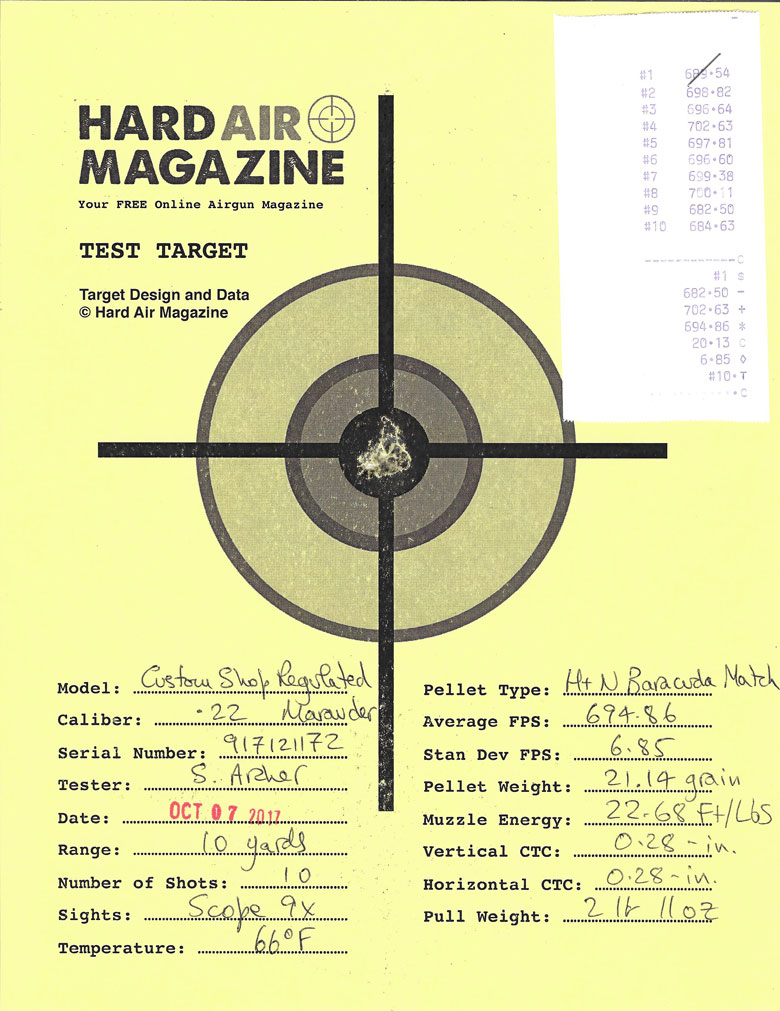