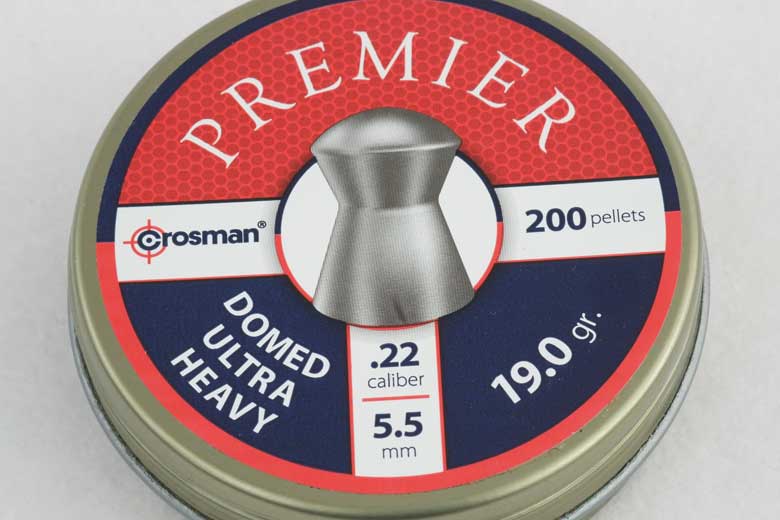 If these heavy - not ultra heavy - pellets prove accurate in your air rifle, they could be worth trying for hunting; preferably with a powerful PCP air rifle. However the low Ballistic Coefficient means that they are best used at short range.

The main reason they do not achieve a HAM Award is that they are simply too expensive for the manufacturing quality they offer.

57%
HAM Rating
You have rated this
Full Review

We’ll start by talking price. Crosman Premier Domed Ultra Heavy 19.0 Grain pellets are expensive at 5.5 cents each. That puts them well up the price range for .22 caliber pellets, as we can see from the chart below.

The main issue here is that – at this price – they compete with pellets from other manufacturers that offer rather better manufacturing quality.

Although Crosman pellets have never achieved the highest quality scores in HAM testing, some of them have earned a coveted HAM Gold Award. This has been due to their value.

For example, Premier Hollow Point pellets work well in many airguns – as we can see from multiple HAM Air Rifle tests. They are also cheap, make that really cheap, for what they offer.

With Crosman Premier Domed Ultra Heavy 19.0 Grain .22 Caliber pellets at 5.5 cents each, we have a different situation. Now Crosman has pellets priced above some outstanding quality ammunition offered by manufacturers such as H&N and JSB.

Velocity Outdoor makes three basic claims for Crosman Premier Domed Ultra Heavy 19.0 Grain pellets. These are that they are “ultra heavy”, offer devastating power and accuracy” and that they have 33% more weight that standard Crosman .22 caliber domed pellets.

Compared to the standard Crosman Premier pellet weight of 14.3 Grains, yes the 19 Grains weight is 33% greater.

And yes these are heavy pellets. But it’s difficult to argue that they qualify as “ultra heavy”. It’s easy to find .22 caliber pellets at 25 Grains or more. JSB Beast Jumbos weigh 34 Grains each. That’s around 79% heavier than these Crosman Premier Domed Ultra Heavy 19.0 Grain pellets. 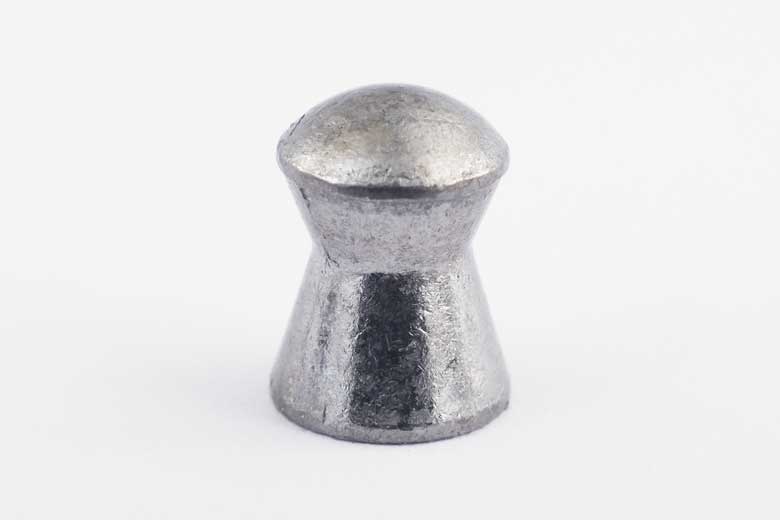 As for “devastating power”, this will really depend on the air rifle they are fired from and at what range it’s measured…

Using the HAM standard “1000 FPS” Beeman 1074 test gun we found the Muzzle Energy to be 15.79 Ft/Lbs. This is actually less than the 16.14 Ft/Lbs achieved by the same gun with 14.3 Premier Hollow points in HAM testing. There’s more on this in the Downrange Performance section of this review, below.

However, in a powerful PCP, it would be fair to expect the heavier pellets to have a higher kinetic energy.

Likewise accuracy. HAM pellet test reviews to not cover accuracy testing. This is because accuracy is a “systems” outcome. It’s a combination of pellet, air rifle, scope, weather conditions and shooter.

It is quite possible that Crosman Premier Domed Ultra Heavy 19.0 Grain pellets will be accurate in some air rifles. The Benjamin Marauder would be a good guess. But the consistency results detailed below do not indicate that manufacturing quality alone is likely to lead to extraordinary accuracy.

The specified weight claim of 19.0 Grains is closely met by the measured average weight of 18.94 Grains among the pellets tested by HAM. Likewise, 200 pellets per tin are claimed. The tin tested by Hard Air Magazine contained 201.

No damaged pellets were found in the tin of Crosman Premier Domed Ultra Heavy 19.0 Grain pellets tested by HAM.

In most pellets, head diameter is tightly controlled. The Domed Ultra Heavies tested by HAM showed less than average consistency in this respect. However, they are better than the Premier Hollow Points tested previously by HAM.

The variation of 0.91% between the smallest and largest dead diameters was likewise below the average for pellets tested by HAM. 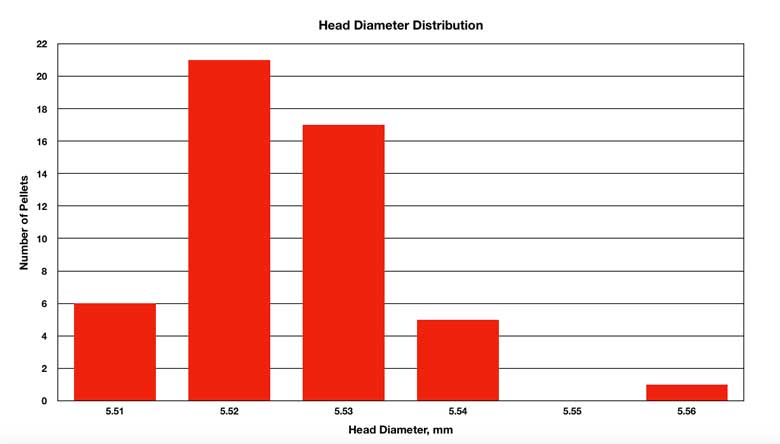 Weight consistency was rather better.

Here, 18% of the tested pellets had the same weight of 18.94 Grains – the most common weight. The variation between lightest and heaviest pellets was 1.8%. Both of these percentages are above average.

Seven per cent of the tested pellets matched the manufacturer’s claimed weight of 19.0 Grains. 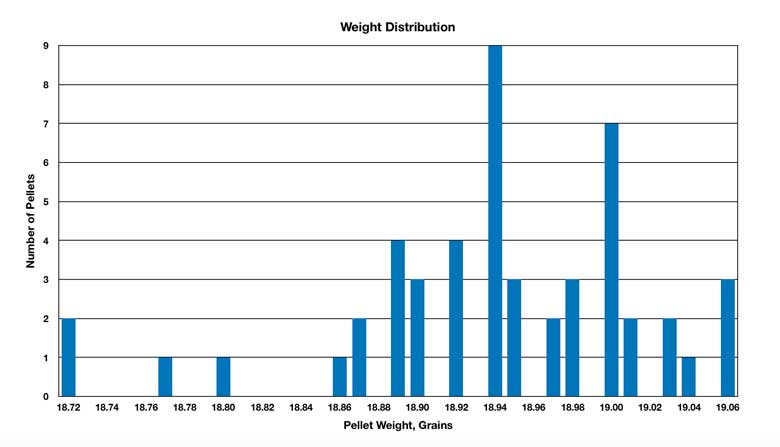 Length variation among the Crosman Premier Domed Ultra Heavy 19.0 Grain pellets tested by HAM was well controlled. 28% of the tested pellets had the same overall length of 7.80 mm. This is better than average.

The variation in length between the shortest and longest pellets tested by HAM was 1.69%. This is around average in our experience. 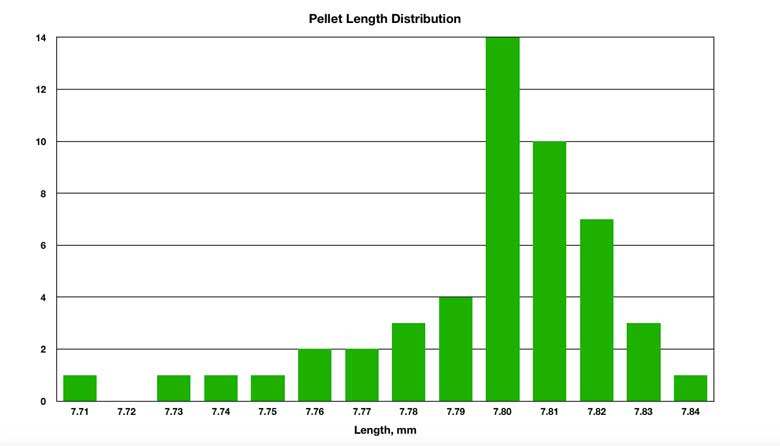 Of course, some dirt and dust is an inevitable accompaniment to pellet manufacture. The Crosman Premier Domed Ultra Heavy 19.0 Grain pellets tested by HAM had around 0.5 Grains of lead junk per 100 pellets. This is about average among the pellets we have tested. 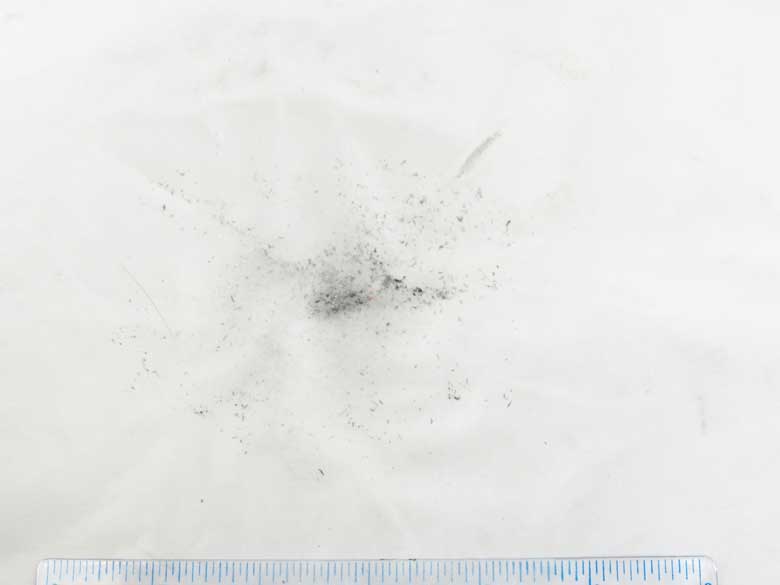 This is low for a domed pellet, both in general and compared to other Crosman pellets. The result is that the Ultra Heavies are best used at short-range.

At 60 Yards, Chairgun demonstrates a remaining kinetic energy of 6.0 Ft/Lbs for the Ultra Heavies when fired from the Beeman 1074. This compares to 7.77 Ft/Lbs for the 14.3 Grain Crosman Premier Hollow Points.

As already discussed, the Ultra Heavies are best used for hunting at short range.

Penetration into the standard HAM ballistic soap block was 44 mm. 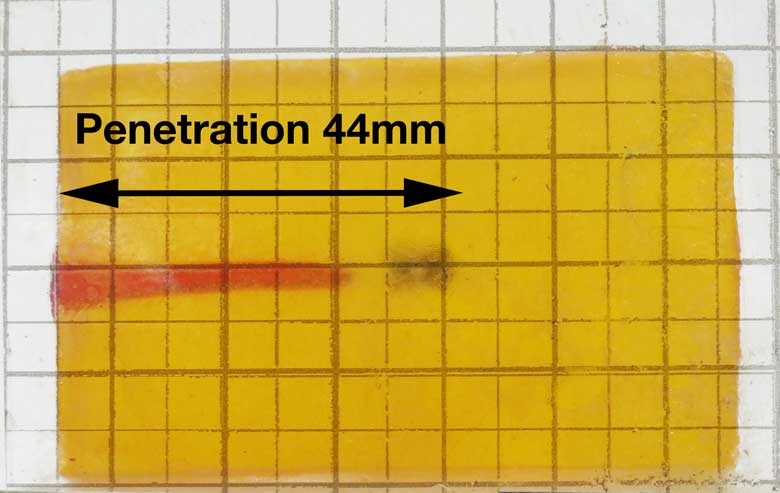 There was relatively little deformation of the pellet during this test. When recovered from the soap, the pellet measured 7.74 mm long, compared to 7.81 mm before firing. 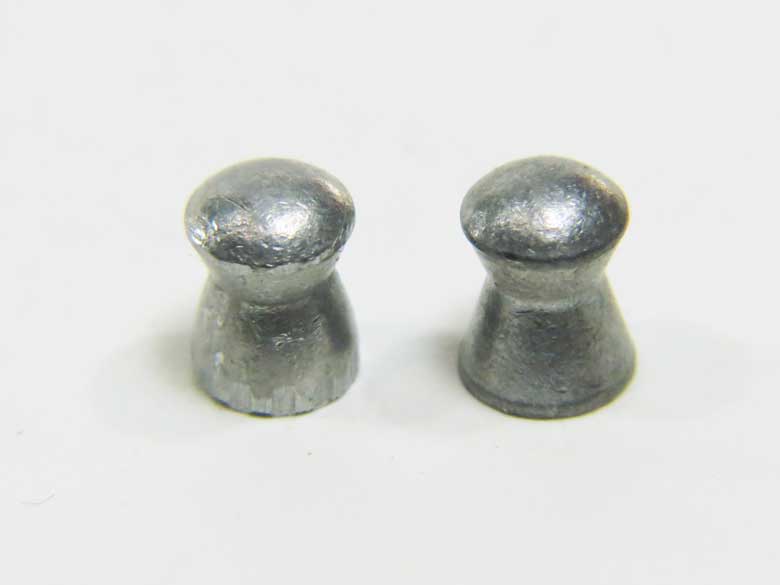 Thanks to Velocity Outdoor’s outstanding distribution network, Crosman Premier Domed Ultra Heavy 19.0 Grain pellets are likely to be easily found in many places where there other pellets are found.

There’s a foam pad inside the tin of there Brazilian-manufactured pellets. This did a good job of preventing damage to the contents in the tin tested by HAM.

The tin’s screw top was convenient and easy-to-use. It was fastened less tightly than Crosman’s domestically-produced pellet tin lids, which can often be very hard to unscrew. That’s good. 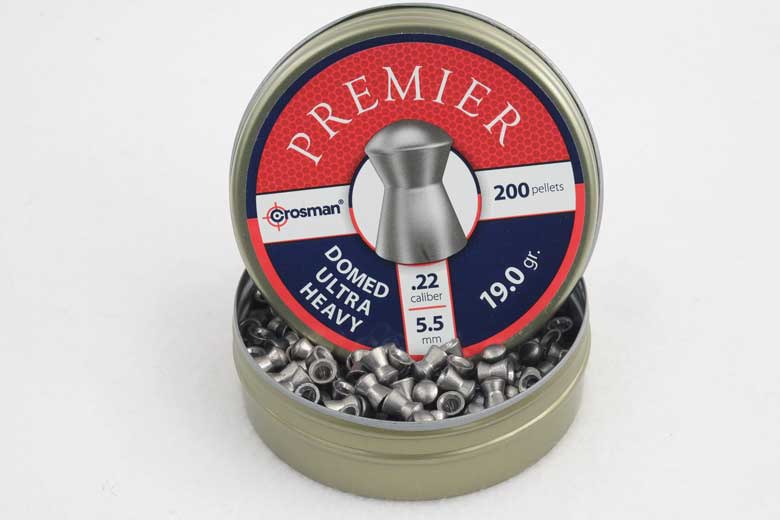 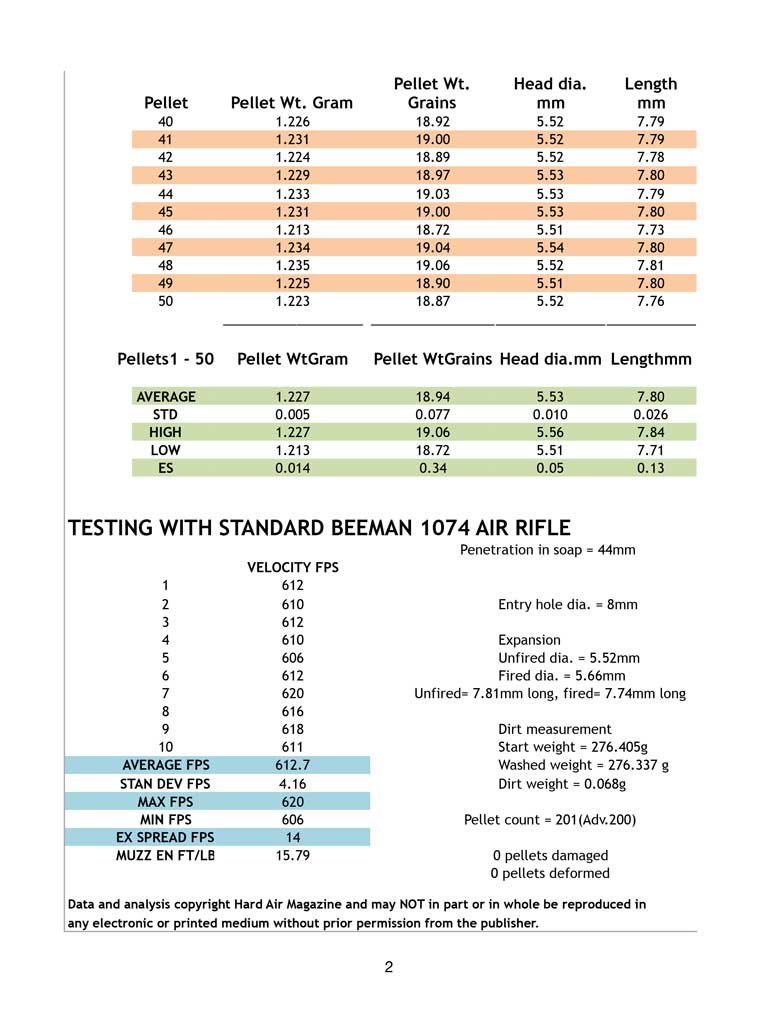