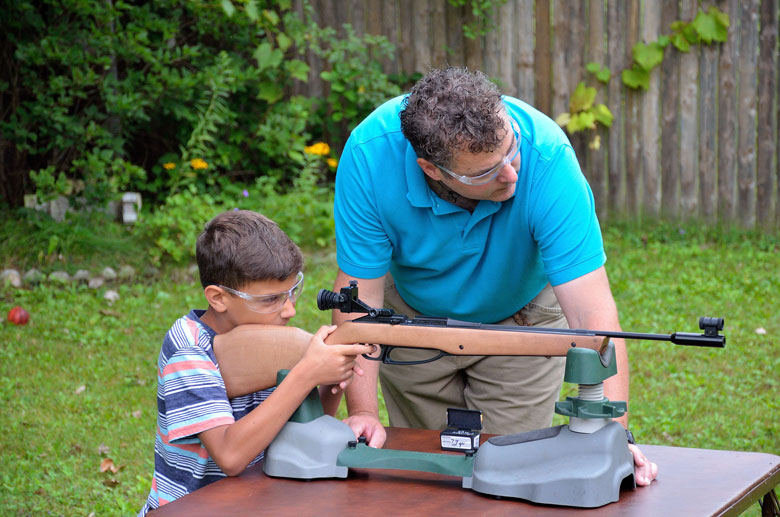 The Daisy Avanti 753 is an unusual airgun in today’s market. It’s a single stroke pneumatic air rifle that’s designed unashamedly for 10 Meter Three Position competitive target shooting at the Sporter level. The 753 is available with either a wood or synthetic stock. Our gun had the wood stock.

Take it away Ron…

I suspect many of you started shooting with a Daisy BB gun during your formative years. That’s what I did during those wonderful years in the 1940s when I roamed the edges of rural Indiana corn fields with my Red Ryder Lever Action carbine.

Many graduate to a 22 rimfire rifle as they mature, while others opt to continue shooting with air-powered guns. My transition was to the former, but looking back I would have loved to own a quality air powered target gun. 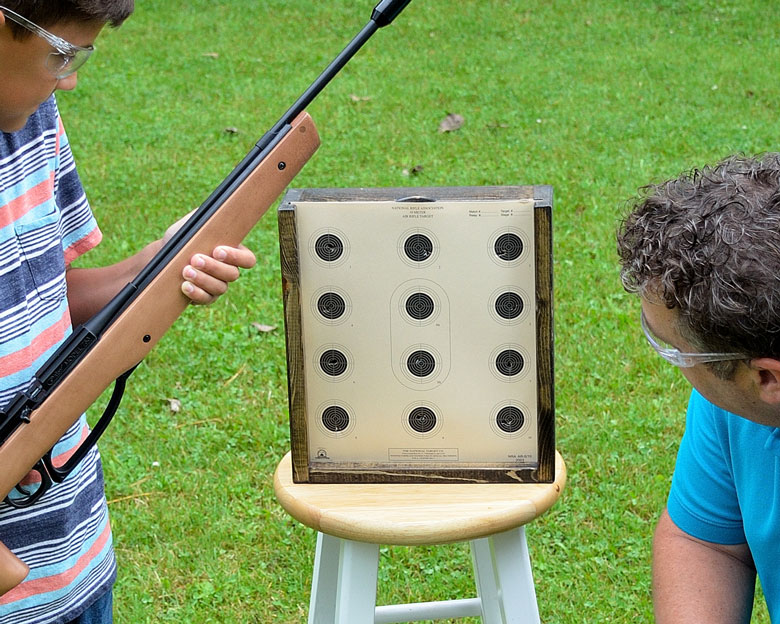 Even in rural Indiana in the 50s, there were limits on where and when a kid could carry a 22 rimfire rifle. Dad made me hunt the local rabbit population with the bolt action open and the chamber empty.

Safety lessons were deeply imprinted in my youthful brain, but opportunities to practice precision small bore shooting were scant. Maybe that is why I soon transitioned to shotguns and left the rimfire gathering dust in the back of the closet.

Looking back, I truly believe graduating from my Daisy Red Ryder and Model 25 Pump to a quality, target grade pellet rifle would have been a more instructive way to transition into firearms. But when Hard Air Magazine Publisher Stephen Archer asked if I would like to test a Daisy Avanti 753 target rifle, my initial response was mixed…

Yes, I would love to test a gun which would fulfill the needs of those youngsters desiring to test their metal in a more structured competitive arena. But – never having been a competitive rifle shooter gave me pause.

I wasn’t sure I could do justice to a review of a gun in this class. Stephen convinced me otherwise…

Evaluating the quality and performance characteristics of a Match Grade air rifle is quite different from actually shooting the gun in competition.

We agreed that what most readers would like to know is whether Daisy’s gun was a quality build, and whether it possessed attributes necessary to achieve success on the target range.

So let’s take a look at the features which may or may not make this gun a good choice for growing youngsters to explore the world of competitive 10 Meter Three Position air rifle shooting. 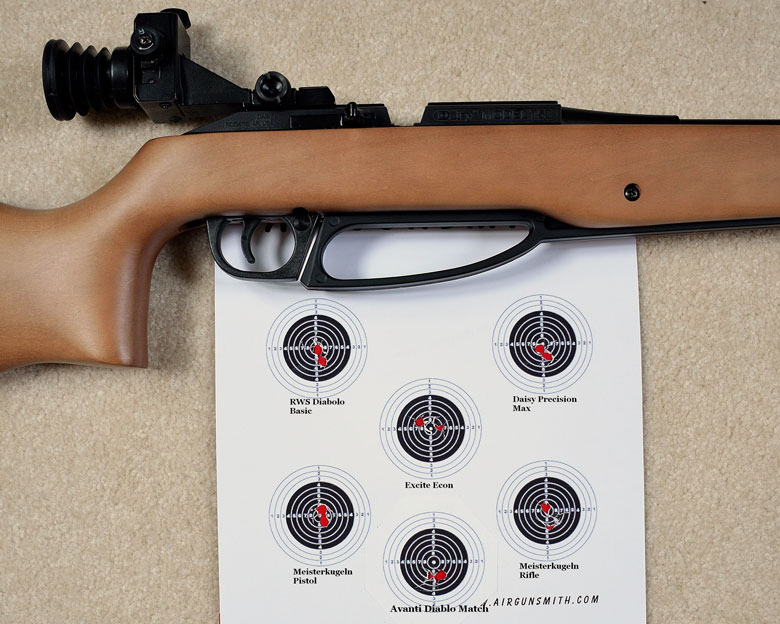 A Daisy representative told me that each gun is reviewed for essential safety and performance features before it is shipped to the customer. In the case of the Daisy Avanti 753 shipped to me, the following features were evaluated based on the average of 5 tests.

Trigger Pull Weight.
The finger pressure required to release the trigger of our Daisy Avanti 753 was 3.0 Lbs, with no shot to shot variation. The acceptable range was 2.9-5.5 Lbs.

Five shot group at 10 Meters.
The gun, tested by Arredondo at Daisy with Avanti Match Grade pellets, produced a CTC (Center to Center) group measuring 0.15 Inch. The company will accept group sizes up to 0.3 Inch for the Daisy Avanti 753. 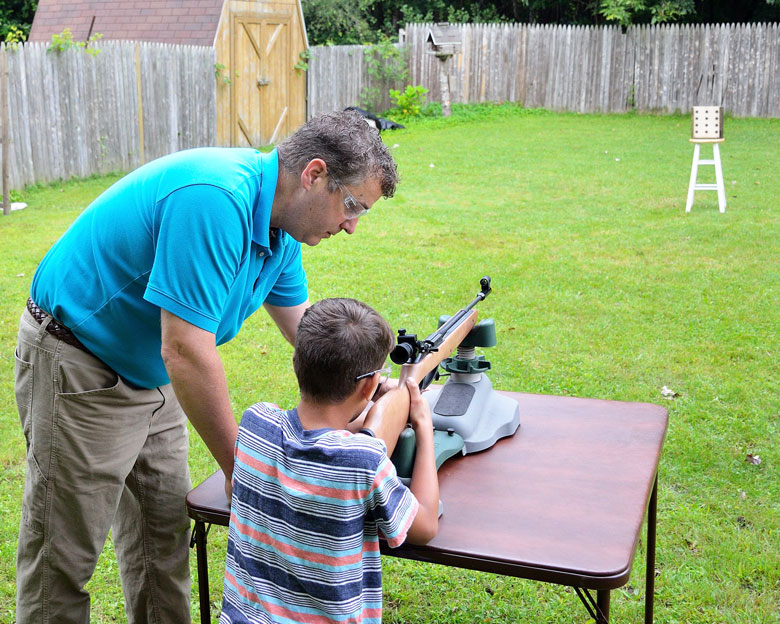 Let’s start with the heart of the gun: the Lothar Walther barrel.

The reputation of Lothar Walther barrels is outstanding. Their quality is recognized world wide. The Daisy Avanti 753 shipped to us is no exception.

I was not quite able to achieve Arredondo’s 0.15 Inch group (less than the diameter of a single pellet), but that has more to do with the tester (that would be me) than with the gun!

My group size for a variety of available pellets ranged from 0.23 Inch to 0.4 Inch, with a 0.3 Inch average of all 5-shot groups.

The widely-available Daisy Precision Max pellets supplied with the gun and my own supply of RWS Meisterkugeln Pistol pellets produced the tightest groups in my initial 5-shot tests at 10 Yards.

Daisy promised to send me a tin of their Avanti 8.4 Grain Match pellets for comparison. They arrived 3 days later, and proved to be the most accurate, producing a 5-shot, 10 Yard group of 0.17 Inch CTC. Here’s the accuracy I achieved with the Daisy Avanti 753.

Arredondo out shot me with his 0.15 Inch group, but I came close!

The critical components for best accuracy include the Lothar Walther barrel, a single pump pneumatic system which will produce consistent velocities, precision sights and a quality trigger. The Daisy has all of these.

In addition to the barrel, which Daisy has accurately bedded in a well designed birch target stock, the Daisy Avanti 753 has a trigger release which is remarkably CRISP.

Shot after Shot, it allowed me to “call my shot”, reaffirming that the gun had discharged when the sighting optics were optimum.

Naturally, I couldn’t have done that without quality sights. The high quality Daisy Match Grade Avanti Precision Diopter Sight and companion Globe front sight with 5 aperture inserts are easily attached to dovetails on top of the receiver and on the front barrel weight.

I found an error in the manual quantifying the click adjustment, but you’ll be really close by using 40 clicks to the Inch at 10 Meters.

The Avanti Diopter sight delivered reproducible points of impact when I shot the following sequence: I shot a single shot, moved the Diopter sight up 50 clicks and shot a one hole, two shot group. Then returned the elevation to the original setting and planted the next pellet in the same hole as the original.

In a final evaluation, we turned the gun over to Spencer Korson, and his 11 year old son Logan. Spencer supervised the NRA 10 Meter air rifle target test with Logan. 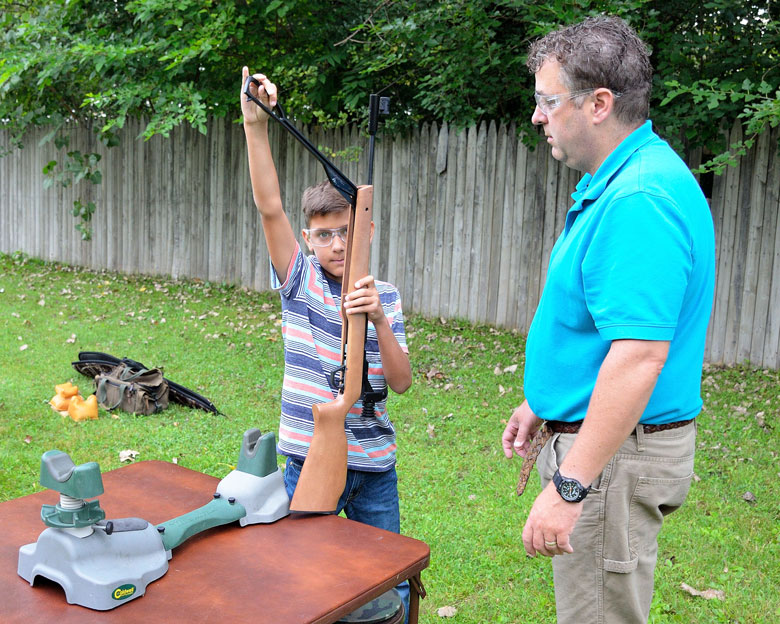 Logan initially struggled with the pressure phase of pumping the Avanti, but after about 2-3 attempts he “got the rhythm”, and pumping the gun became much easier.

Logan isn’t yet an off hand target shooter, so Dad had him use a rifle rest to steady the gun. 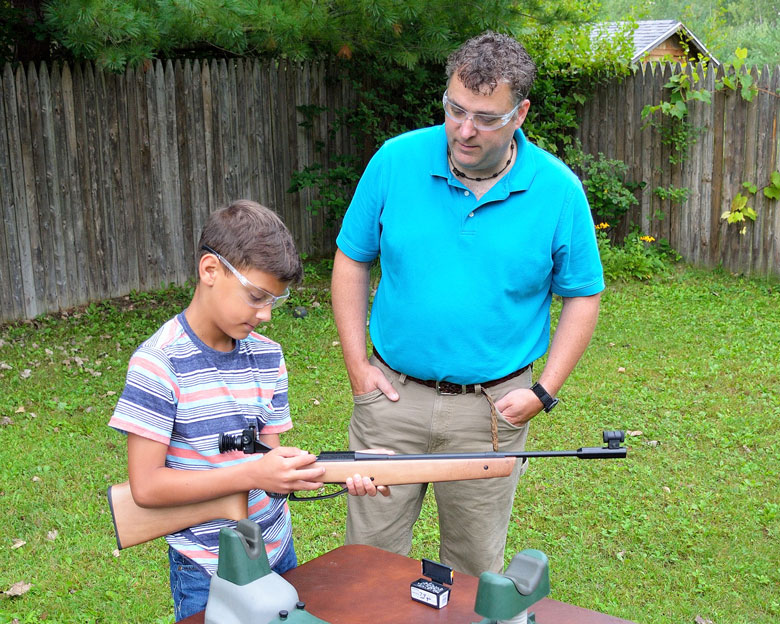 Logan quickly learned the correct sequence required to ready the gun for the next shot – a sequence which is spelled out on the side of each Daisy Avanti 753 action.
1. Put the Avanti on SAFE.
2. Open the Bolt,
3. use the underlever to pump the gun a single time,
4. load a pellet by placing a single 0.177 cal pellet on the loading ramp and allowing it to roll into the action,
5. Close the bolt,
6. move the safety to “off” just before executing the shot. 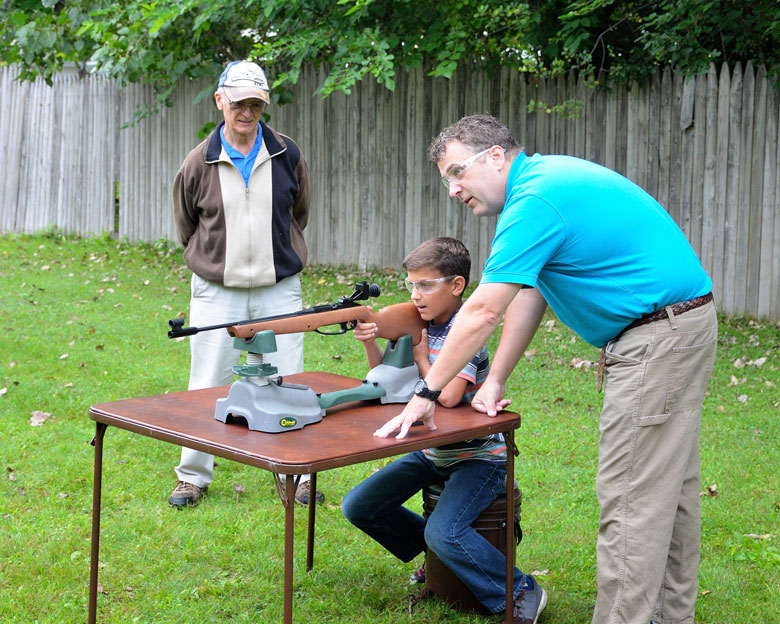 To the sheer delight of all, Logan 10X’d the first shot!!!

He had never used a diopter sight or globe front target sight before, but he had no problem adjusting to the novel sight picture. And the remaining 10 shots were all in the black. Great job, DAISY.

Our Daisy Avanti 753 weighed 6.0 Lbs with sights, and according to Daisy is intended for young, aspiring competitors 16 years of age or over. But this 11-year old did exceptional well with it!

Three stock inserts are provided so that the owner can adjust the Length of Pull from 12 3/8 Inches to 14 1/4 Inches.

The Daisy Avanti 753 is supplied with a detachable Uncle Mike’s sling swivel and nylon sling. Five interchangeable inserts with graduated apertures are provided with the Globe front sight. 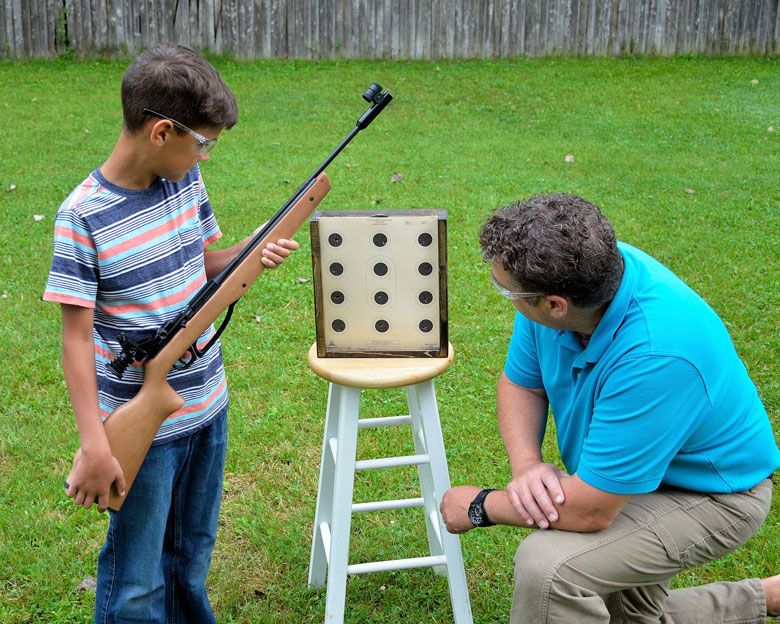 Note: For more information on the basics of Three Position air rifle shooting, check out the Civilian Marksmanship Program at http://thecmp.org/air/ 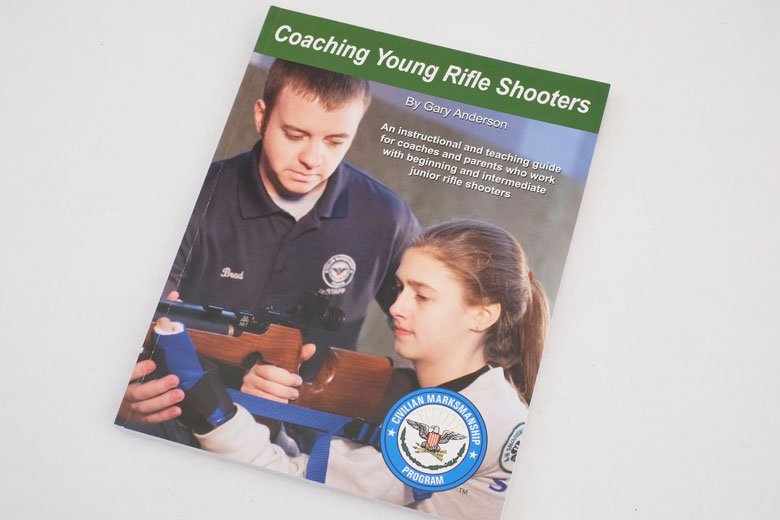