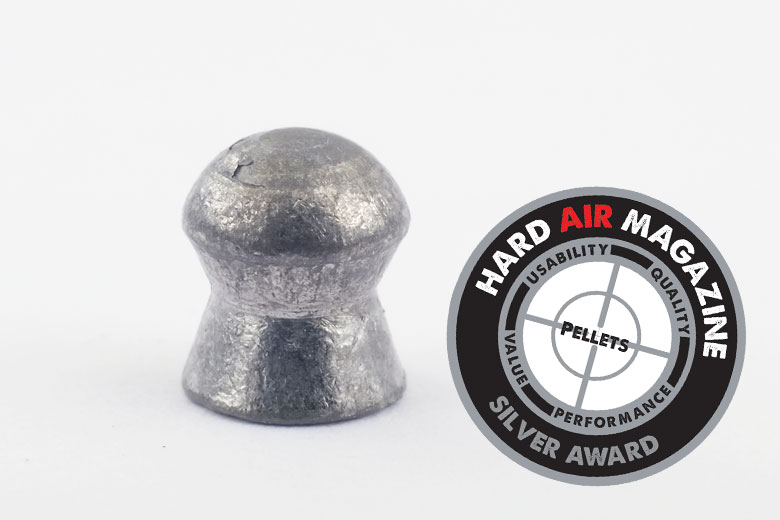 Somewhat dirty.
Head diameter may be large for some guns.
Lengths a little variable.

As a version of the highly-regarded H&N Field Target Trophy pellets, these Kaisers are likely to be an accurate, effective pellet with Daystate air rifles. Suggested uses include hunting and Field Target competition.

57%
HAM Rating
You have rated this
Full Review 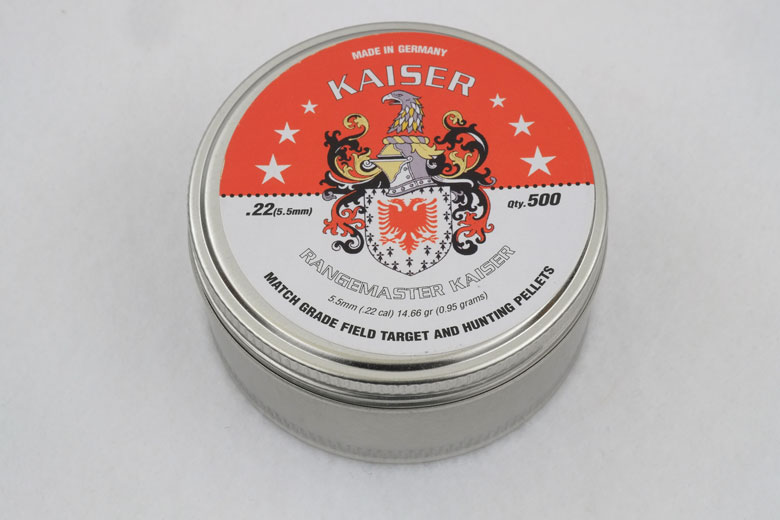 Daystate Rangemaster Kaiser 14.66 Grain .22 caliber pellets are manufactured for Daystate by H&N in Germany. This is a well-known fact, as Daystate promotes this. Daystate also says that they are a specially-selected to work best with the Lothar Walther barrels fitted to their air rifles.

These pellets are actually version of H&N’s popular Field Target Trophy pellets, as the label on the base of the tin makes clear, below.  “Hausmarke” translates approximately to “own brand” in English. In other words, branded for another company. 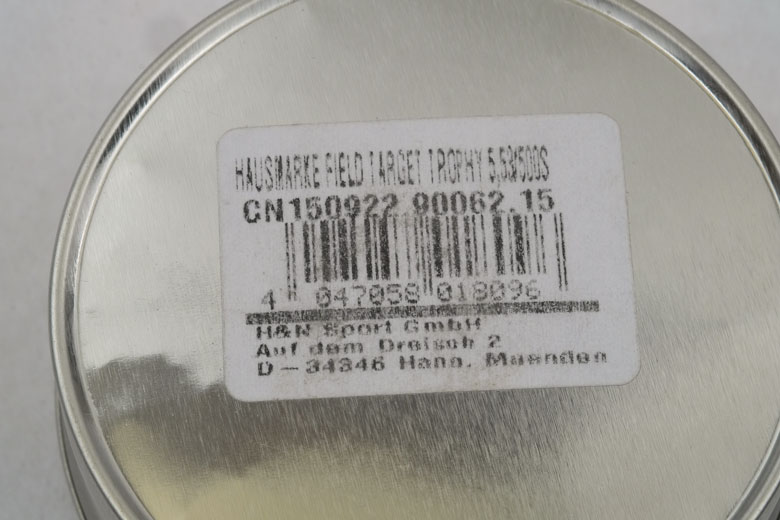 At $18.95 for a tin of 500, Daystate Rangemaster Kaiser pellets cost 3.79 cents each. This is less than the median price for .22 caliber lead pellets, thus these Kaisers represent excellent value for a selected pellet.

Daystate makes few claims for the Kaiser Rangemaster pellets, beyond them being specifically selected for use in their barrels.

There’s no specific details of how the Daystate Rangemaster Kaiser pellets are selected. However, comparing the Kaisers against the .22 caliber H&N Field Target Trophy pellets tested by HAM in the past, a couple of differences are clear.

The Kaisers average a slightly lighter weight – 14.85 Grains compared to 15.00 Grains and they have a larger average head diameter: 5.56 mm compared to 5.55 mm.

Most significantly, the Ballistic Coefficient of the Daystate Rangemaster Kaiser pellets was significantly higher that that of regular Field Target Trophies: 0.023 compared to 0.019 of the FTTs.

In HAM Ballistic Coefficient testing, the Kaisers had a Muzzle Velocity of 893 FPS using our standard FX Impact BC test rifle. The Field Target Trophies were faster at 924 FPS. However, the velocity at 30 Yards was approximately the same for both pellets. (Soap block penetration was deeper for the Kaisers, as you would expect from the higher BC, too).

So, yes, the Daystate Rangemaster Kaiser pellets are very similar to H&N Field Target Trophies. However, they do exhibit some signs of being specially selected, as claimed.

The tin is specified to contain 500 pellets. However, only 496 pellets were in the tin tested by HAM. Of these, 2 had some malformation, we couldn’t determine if this was due to manufacturing or shipping issues.

As pellets are usually packed by weight, and the average weight of the Daystate Rangemaster Kaiser pellets tested by HAM was 14.85 Grains – rather more than the specified 14.66 Grains – that would account for the shortage.

The head diameter consistency of Daystate Rangemaster Kaiser pellets was better than average. 76% of the pellets tested by HAM had a head diameter of 5.56 mm. The variation between smallest and largest was just 0.36%. 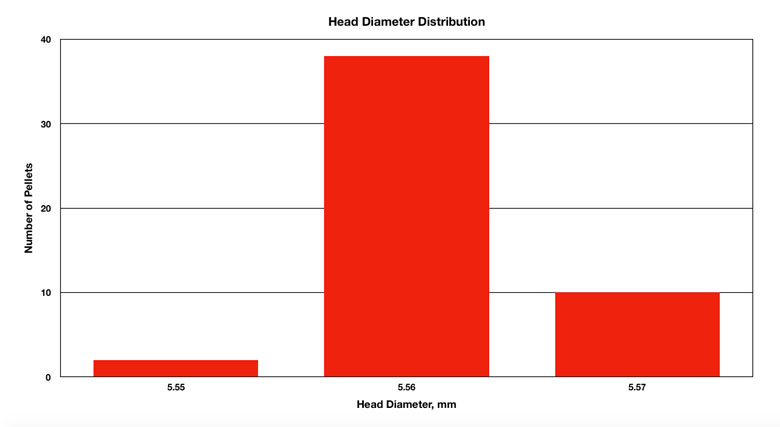 Weight consistency of the Daystate Rangemaster Kaiser pellets tested by HAM was around average. The most common weight found was 14.83 Grains – 12% of the pellets having that weight. The average weight was slightly higher at 14.85 Grains. The variation in weight between the lightest and heaviest pellets tested was 3.49% 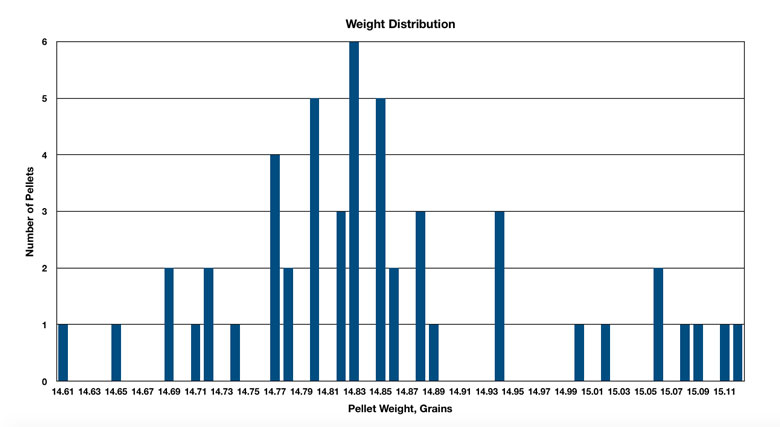 Length consistency was slightly below average for the pellets tested by HAM. The average length was 6.55 mm, with the most common length – 6.51 mm – being found in 16% of the pellets tested. The variation between the shortest and longest Daystate Rangemaster Kaiser pellets tested was 3.57%. 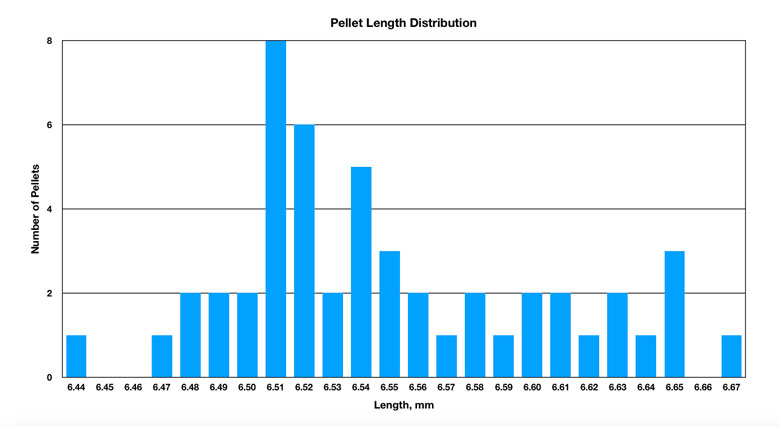 The tin of Daystate Rangemaster Kaiser pellets tested by HAM contained a fair amount of lead dust and shavings from manufacture, as we can see from the photograph below. Actually, it was 2.525 Grains of lead.

However, it’s important to remember that this was for 500 pellets. That translates to 0.505 Grains of lead junk per 100 pellets. 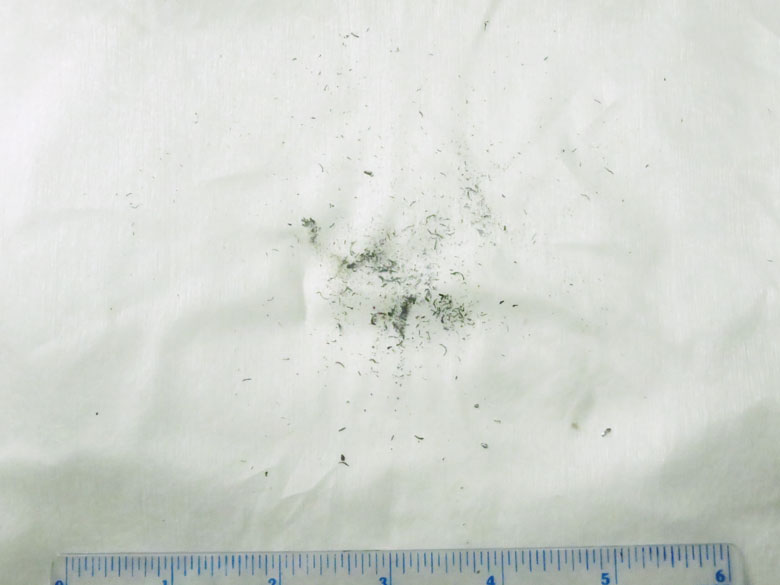 With 70% of the original Muzzle Energy is retained out to 35 Yards. This makes the Kaisers suitable for hunting at medium ranges with a mid-power gun – or longer ranges with a powerful Daystate PCP, as intended.

In confirmation of the somewhat higher Ballistic Coefficient, the Daystate Rangemaster Kaiser pellets tested by HAM penetrated a little further into our standard soap block that the regular Field Target Trophy pellets.

HAM Tester Doug Wall measured a penetration of 49 mm with the Kaisers, compared to 47 mm for the FTTs. 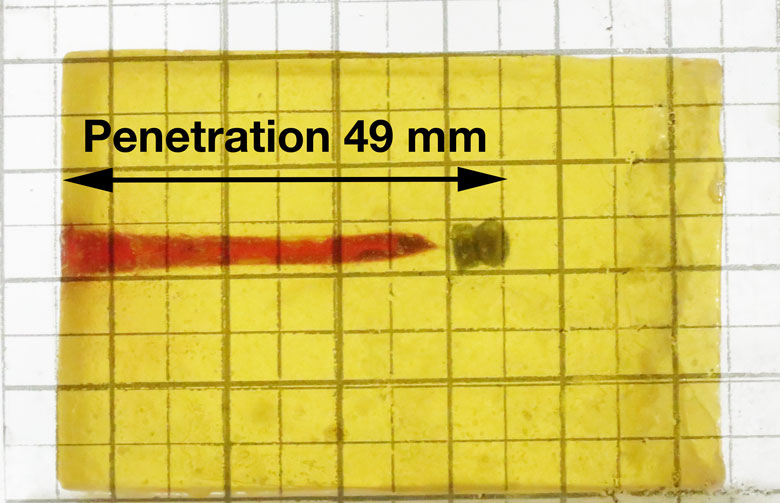 As can be seen from the photograph below, the Kaiser pellet retrieved from the soap (left) had shrunk in length from 6.50 mm to 6.35 mm. It had also expanded in diameter from 5.56 mm to 5.65 mm. The entry hole in the soap block was 7 mm in diameter.

Rifling marks can clearly be seen on the head and skirt of the fired pellet (left). 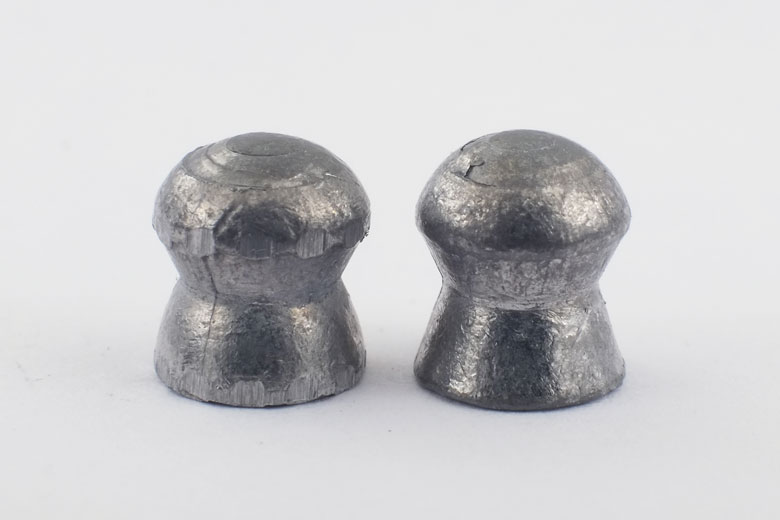 Daystate Rangemaster Kaiser 14.66 Grain .22 caliber pellets are not available through big box sporting goods stores. However they are readily available online from Airguns of Arizona and through specialist Precision Airgun Distribution dealers throughout the country. 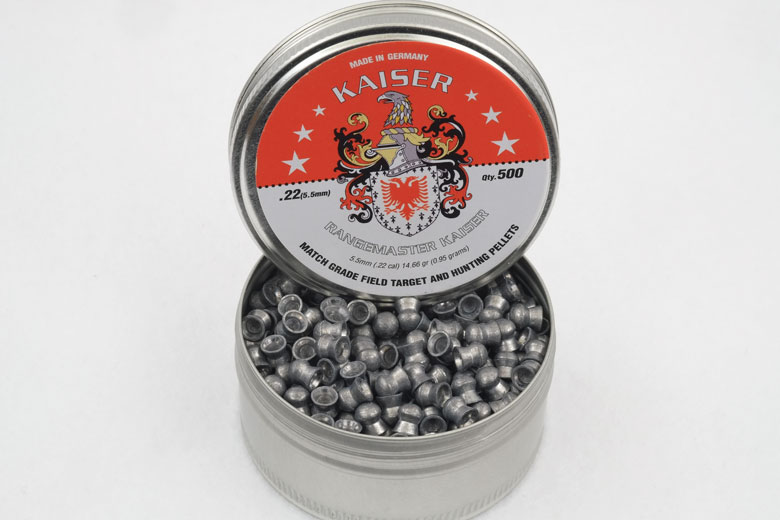 As with other H&N-manufactured ammo, Daystate Rangemaster Kaiser pellets are supplied in a convenient, screw-top tin. These screw-top tins are an useful and practical container for transport and storage. They set the standard for other manufacturers to emulate! 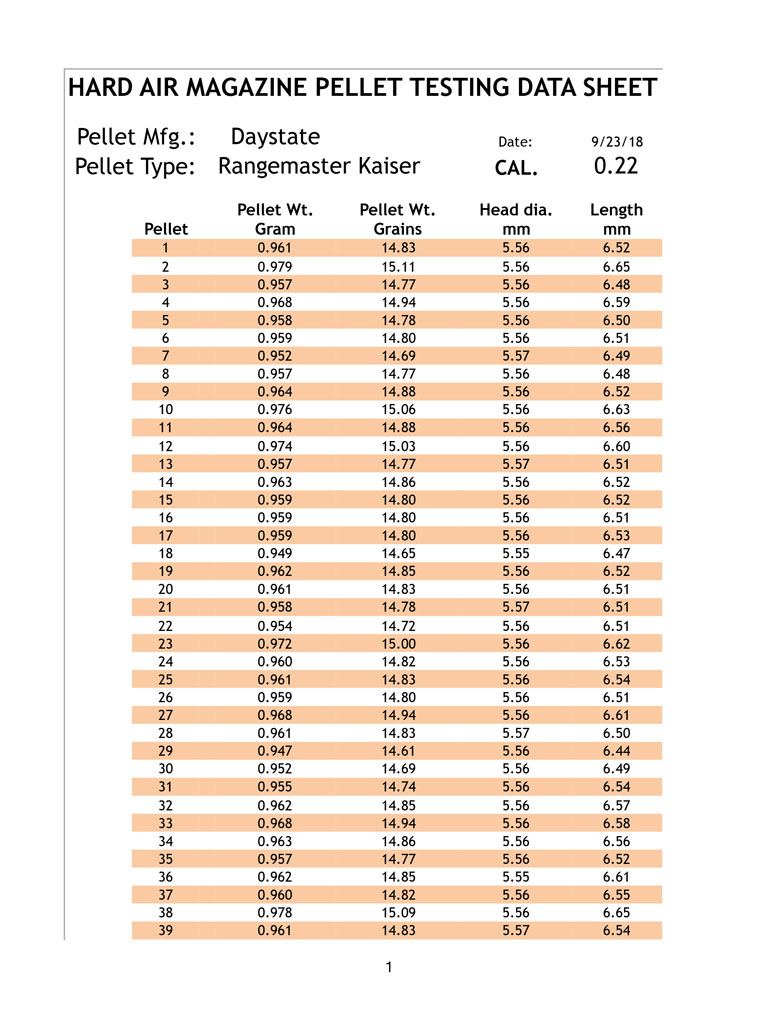 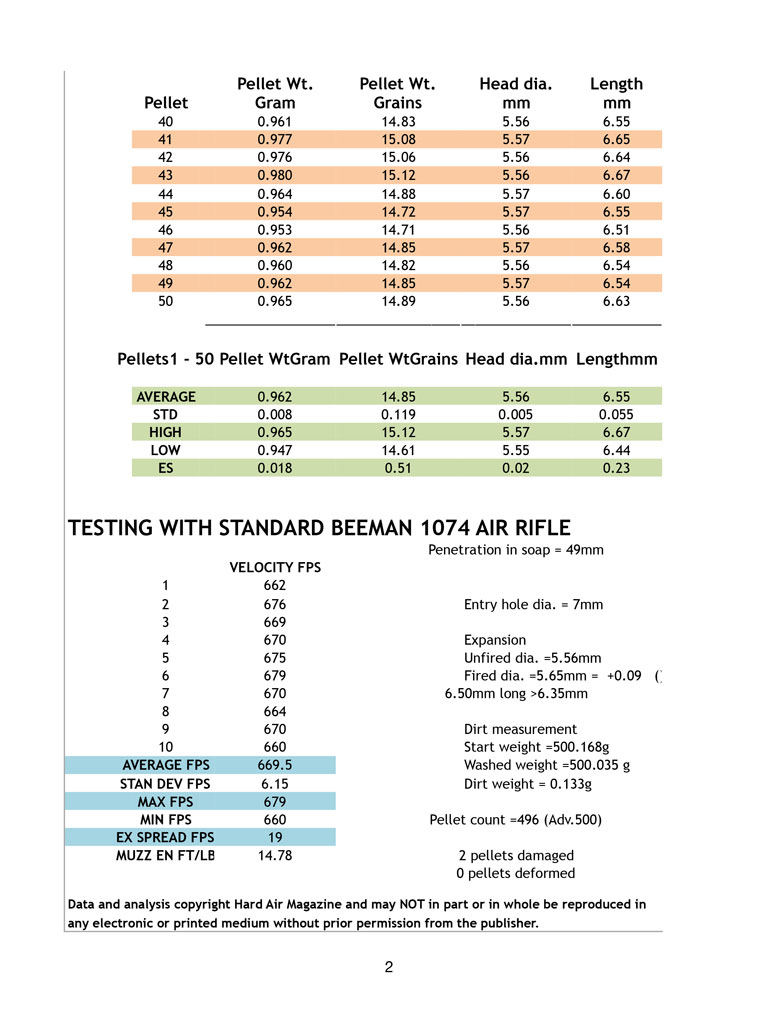