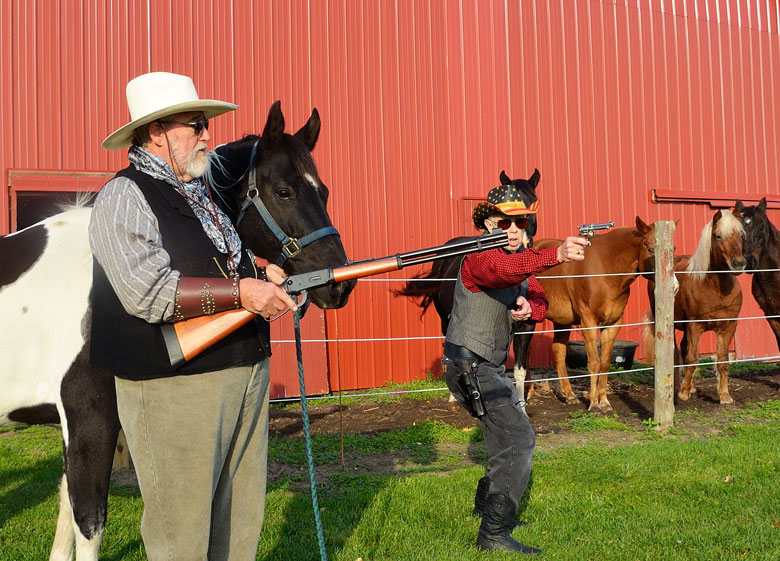 After we Desperados had such fun with the Colt Peacemaker pellet revolver, we wanted to try the Walther Lever Action air rifle also…

The John Browning-inspired Winchester Model 94 lever action rifle was the first rifle of its type built to withstand smokeless powder ammunition. It was manufactured for over a century by Winchester and U.S. Repeating Arms, and is the darling of Cowboy Action shooters.

Cowboys much prefer long guns chambered for a handgun caliber to match their Colt Peacemaker or equivalent revolver. The same holds true for the airgun versions. 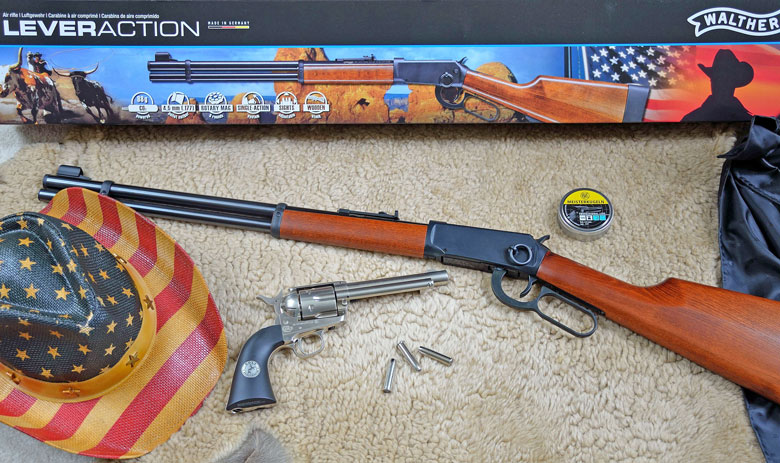 When we finished testing the Umarex Colt Peacemaker 0.177 cal. revolver, it was natural to envision the Walther version of the Winchester Model 94 Saddle Ring Carbine as the companion pellet rifle for those contemplating Cowboy Action style shooting. We had to test the two together. So we did!

Walther had Winchester in mind when they designed their lever rifle. But there are elements of the Walther Lever Action air rifle rifle which resemble Sam Colt’s 1837 Revolving Lever Gun.

Sam Colt’s revolving lever gun, as the name implies, used a lever ahead of the trigger guard to rotate a revolver style magazine, while simultaneously cocking the hammer. Walther’s lever rifle uses the same principle to operate a rotary pellet magazine while cocking the hammer. 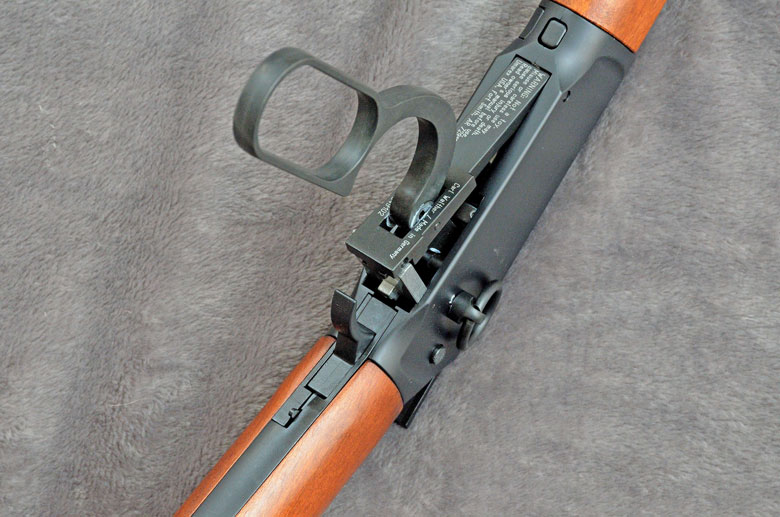 I just received Walther’s CO2, pellet version of Winchester Model 94 lever gun, and the rotating magazine feed is ingenious. A revolving pellet magazine is accessed by depressing the faux magazine loading gate on the side of the rifle. When loaded with eight 0.177 pellets, it becomes invisible once the magazine rotates into battery. 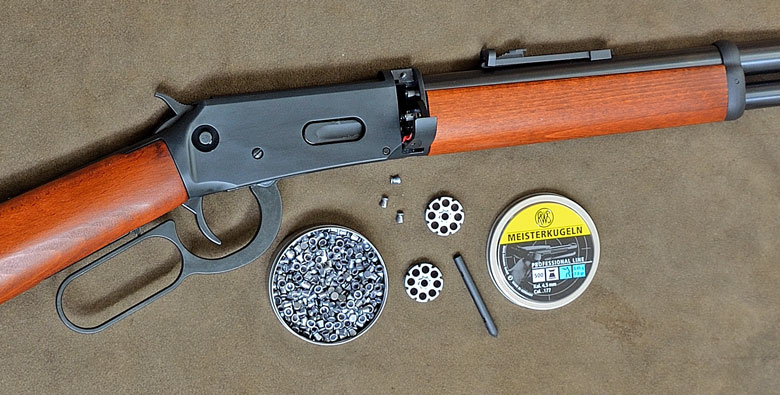 The Walther design resulted in an eight shot lever rifle mechanism that functions with greater precision than many highly tuned Cowboy Action guns.

The Walther Lever Action air rifle was not designed to be an exact replica of the original Winchester Model 94. I would call it an impressionistic rendition. It does a very good job of duplicating the general appearance and feel of the lever gun which helped win the American West.

The feature of the gun which least resembles a Winchester Model 94 is the thick plastic butt plate. Its primary purpose is to allow easy access to the CO2 compartment hollowed out in the butt stock.

I don’t find the appendage a distraction. It’s tastefully done and quite functional. The gun uses 88-90 gram cylinders of CO2, so the number of shots you will get on a single charge can be over 200. If you take multiple magazines to the range loaded with 0.177 pellets, you’ll appreciate the extended shooting time without interruption. 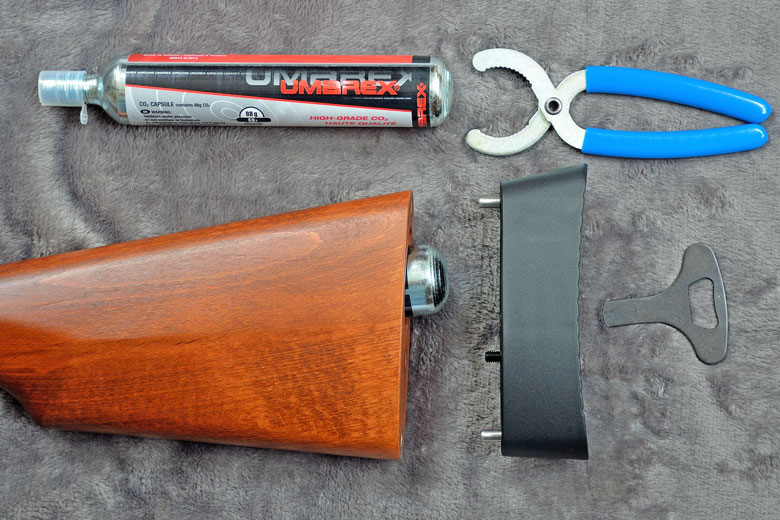 The stock dimensions on the Walther Lever Action air rifle sent to me by Umarex measures 1 1/8 inch drop at comb, and 1 7/8 inch drop at heel, with a 14.5 inch length of pull. When I close my eyes and mount the gun, the open sight alignment is PERFECT.

That doesn’t mean it will be perfect for every new owner, as your bone and muscle structure, ie, your physique, have a lot to do with fit. But over the decades, I’ve found that most guns stocked exactly as they come from the factory fit me very well, so I suspect that my build is average.

All metal finishes are black. The barrel and magazine tube are polished, while the frame, barrel bands, tang and sights are a matt finish.

Unlike so many guns today, there are no disfiguring warnings stamped on the barrel. Just an attractive Walther logo and caliber inscribed in Gold. The mandatory warnings are discretely printed on the bottom of the action.

The butt stock and fore-end are stained walnut, with a low luster finish sealing the attractive, straight grained wood. Wood to metal fit is very good. The gun is stocked with a generous adult length of pull and it appears this can’t be altered. Maybe Walther could develop a replacement butt plate for kids?

The weight is near perfect for a lever gun at just over six pounds, and the balance point sans CO2 cartridge. is squarely between the hands. The Walther Lever Action air rifle becomes slightly muzzle light when a full CO2 cartridge is installed. 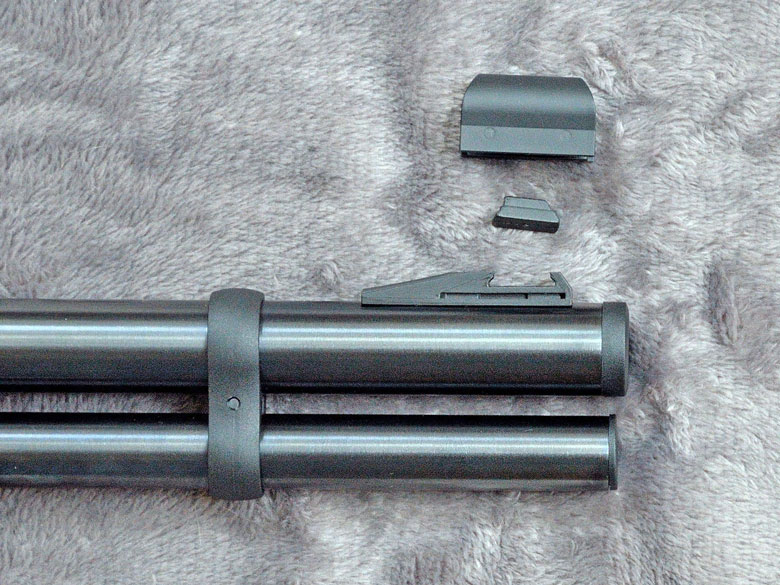 The hooded, ramped front sight and open rear sight with elevator appear to be a durable plastic – easily replaced if broken. 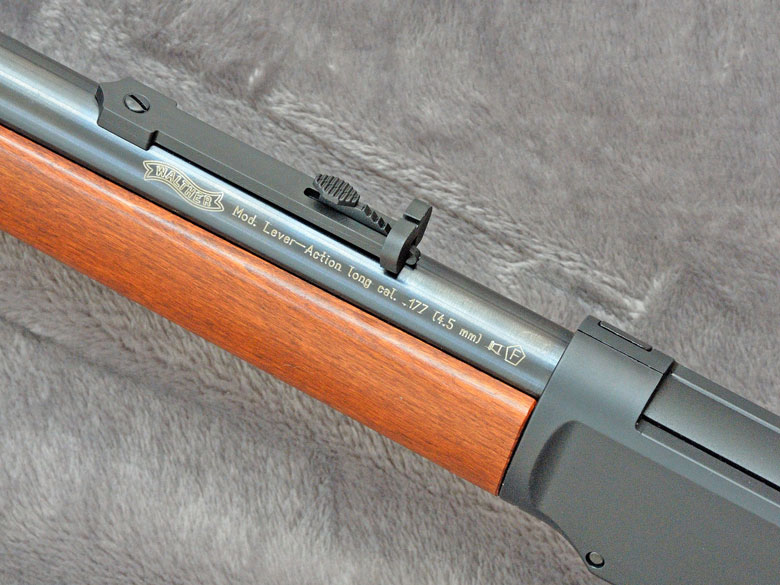 Note to prospective owners: The Walther Lever Action air rifle rear sight elevator wedge is easily lost. It is only held in place by friction. It popped out and fell on the ground when I was sliding the gun into a soft, padded gun case. Not a major issue, but forewarned is forearmed.

The Walther Lever Gun delivered just over 5 Ft/Lbs of muzzle energy regardless of the pellet we fed it. Remarkable consistency. Velocity for the Meisterkugeln 7.0 grain pellets was close to the Umarex advertised velocity of 600 fps. All pellets were tested rapid fire through the chronograph. 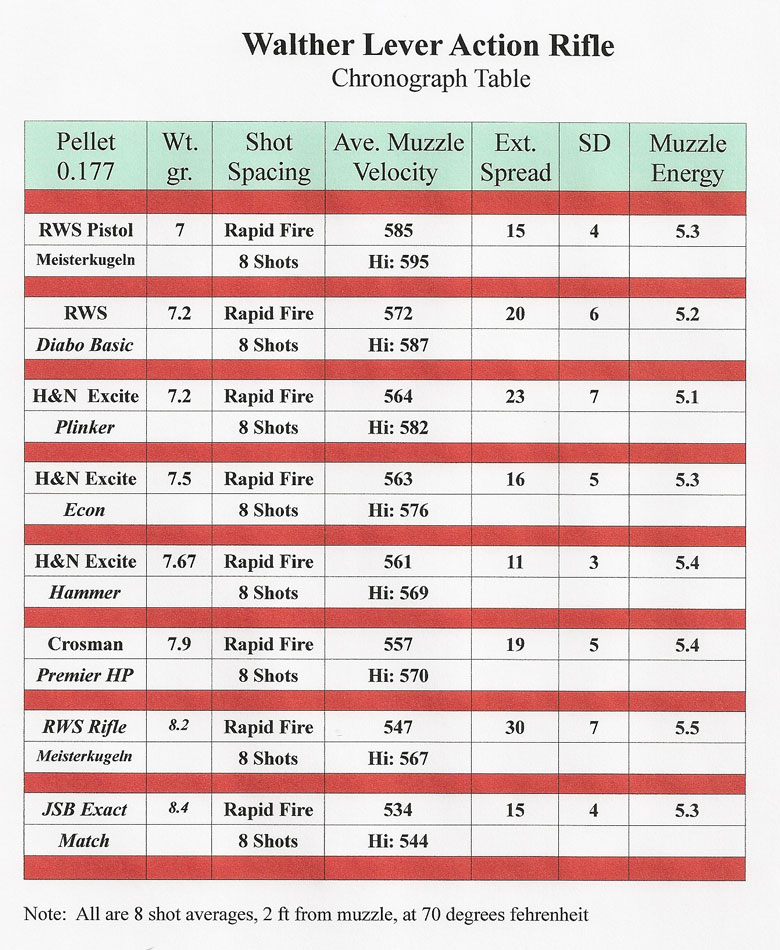 We were amazed at how little the velocity was effected by the cooling produced by each successive shot. Standard deviation ranged from 3 fps to 7 fps. We also noted that accuracy was not measurably effected when the shooting interval was short.

The Walther Lever Action air rifle is not a long range gun, but as you can see by the Trajectory Table, most any pellet will stay within an inch of the aim point out to about 30 yards. 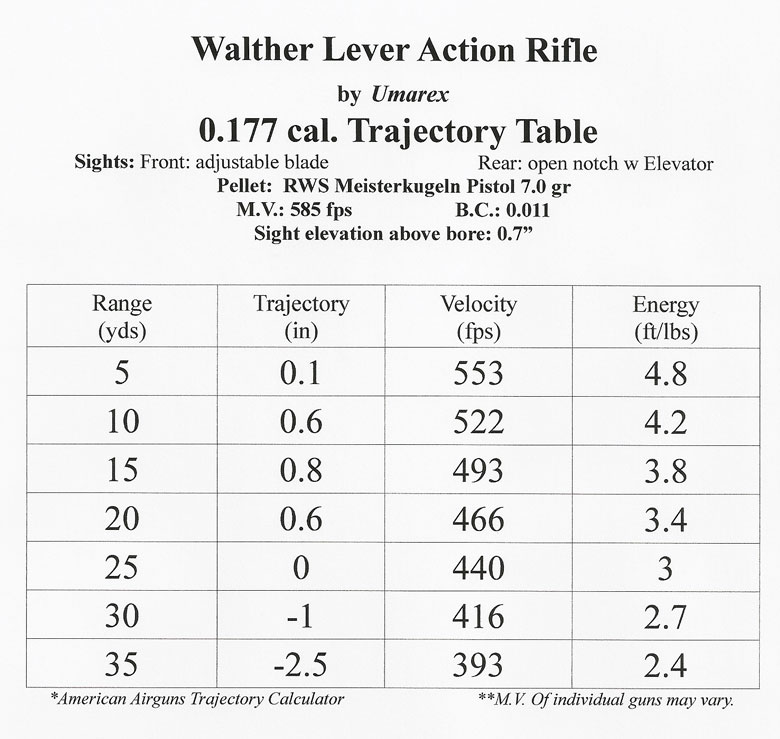 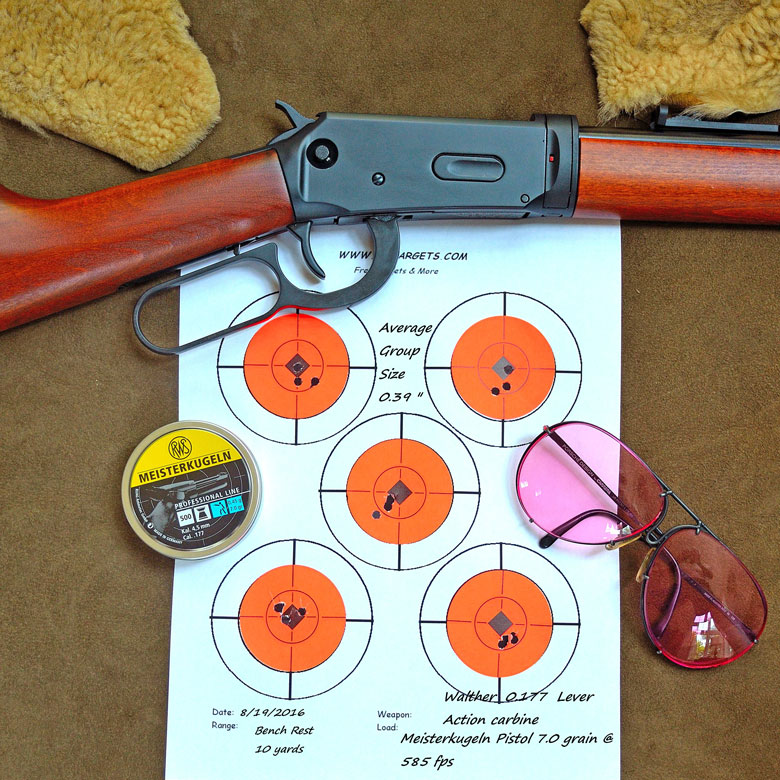 All groups were shot at 10 yards using the open, iron sights standard on the gun. Shots were fired with a normal cadence with no attempt at timing the interval.

It was necessary to make a horizontal sight correction by removing the front sight hood and drifting the blade to the right slightly (trial and error method). Vertical shot placement was near perfect when the rear sight was adjusted to the lowest elevator step.

The Walther Lever Action air rifle has multiple safety features. The Cross Bolt safety is very positive, and easy to engage. And true to the Winchester Model 94 tradition, it has a trigger safety which prevents the gun from firing unless the lever is closed against the stock during the execution of a shot. A small red post extends out of the surface of the magazine cover to warn when a magazine is in place.

This is a FUN gun!

I know, all air guns are supposed to be fun, but lever guns just naturally reach a pinnacle not attainable by other action types.

The gun is carbine length (19 inch barrel), making it perfect for fast action shooting. If I close my eyes, I can easily imagine I’m shooting my centerfire Winchester Model 94. And the light, crisp, 3 3/4 Lb trigger on my sample further adds to the enjoyment. The gun is almost TOO easy to shoot Cowboy style. But you’ll have to be the judge.

‘Till then… Sundance Harry

Historical reference. An original Winchester Model 94 carbine had a 20 inch barrel, 13 inch length of pull, weighed 7 lbs and had a 7 lb trigger pull.