The Diana 240 Classic. A Great Youth Air Rifle and Plinker – Part One. 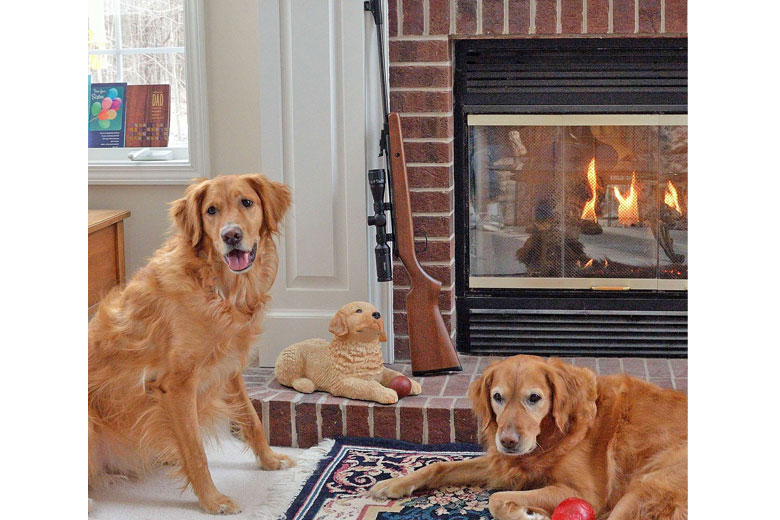 A Monday morning email from Pyramyd Air contained the tracking numbers for my Diana 240 Classic Bundle. Wednesday at noon, Fed-X rang my door bell. There was a sizeable box on the front porch! I corralled my two hunting Goldens, Abby and Jak, and we dove into the packaging with eager anticipation. Eager, because it would be my first hands on experience with a product of this 125 year old German manufacturer.

Since re-discovering my love of airguns, I had been looking at the various RWS 34 models for over a year, and vowed I would eventually add one of these fine guns to my small collection of air rifles.

But what I didn’t realize was that the RWS line of guns (RWS was a trademark of the German Dynamit Noble company until the mid 90’s) were actually produced by Diana.

My initial impressions of the Diana 240 Classic were very positive. 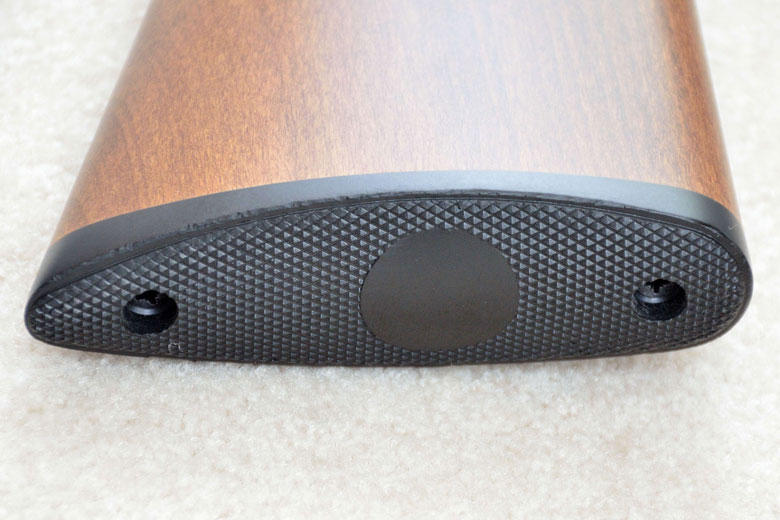 The lines of the gun are just as the name describes… Classic. The European hardwood stock is professionally finished. It has  an attractive, uniform stain and seal rivaling finishes I’ve seen on American walnut stocks fitted to quality shotguns. A quick examination of the barrel and trigger guard revealed perfectly executed inletting. The handsome hard rubber butt plate is seamlessly married to the wood.

The weight and balance of the Diana 240 Classic  air rifle are perfect for a gun primarily designed for youth. 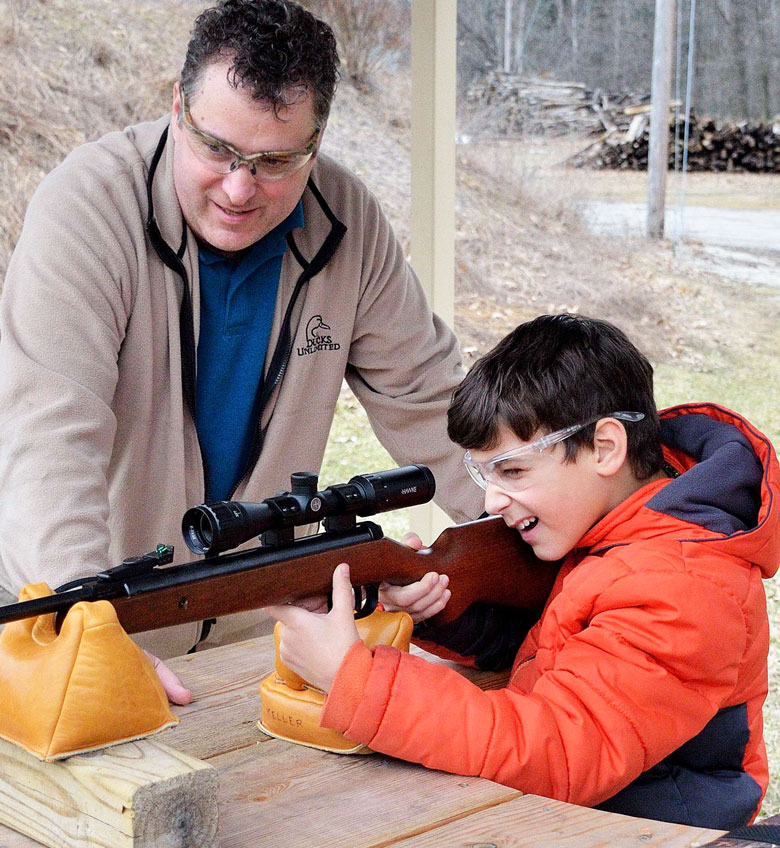 Out came the tape measure, and both guns have exactly the same 13.5 inch length of pull. The Diana 240 Classic isn’t billed as a youth gun, but it is perfect for that purpose. The overall length is a full 5-6 inches shorter than a 1000 FPS adult breakbarrel air rifle. And the Diana 240 Classic weighs well over a pound less than the average break barrel gun. 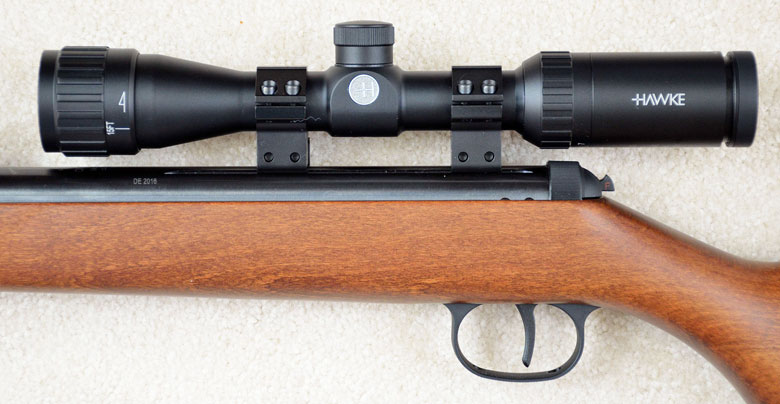 But lest you think this gun is not an ideal plinker for adults – think again! I shot the Diana 240 Classic with both the open sights and the Hawke 2-7×32 AO scope in Pyramyd Air’s Premium Bundle. The stock dimensions were perfect for my 5-feet 10-inch, 140 Lb frame.

So don’t overlook this gun just because you don’t yet have a junior high student in the family!

Firstly, I ran the brush and mop of my Umarex 177 cleaning kit through the barrel a few times to remove the factory lubricant. Then I sent a few pellets down range using the adjustable fiber optic open sights.

I wanted to get a sense of the trigger pull and sound level of the Diana 240 Classic. I can’t be sure, but to my ears the sound level is actually less than my Daisy BB guns!

To be sure, it is significantly less than my 1000 FPS break barrel springers.

But the most amazing revelation about the Diana 240 Classic was the pull of the TO5 trigger. I had just finished testing my Beeman Teton Gas Ram with a 3 ¼ Lb trigger, and the Diana 240 released before I was ready.

WHOW ! What is this ? A short, soft, stage one take up, followed by a beautifully crisp release of the sear. Out came the RCBS trigger scale. The numbers didn’t lie. 1.5 Lbs of trigger pull recorded on each attempt – with minimal variation between attempts. I’ve tested $4,000 shotguns with more variation in the trigger release!

Clearly, the Diana 240 Classic  air rifle would be ideal for a youngster properly schooled in firearms safety.

It did take me a few cycles to get used to the automatic safety of the Diana 240 Classic  air rifle. But it is perfectly placed for the thumb to “snick” into the firing position just before the shot is executed.

Time to check out the performance of the gun. 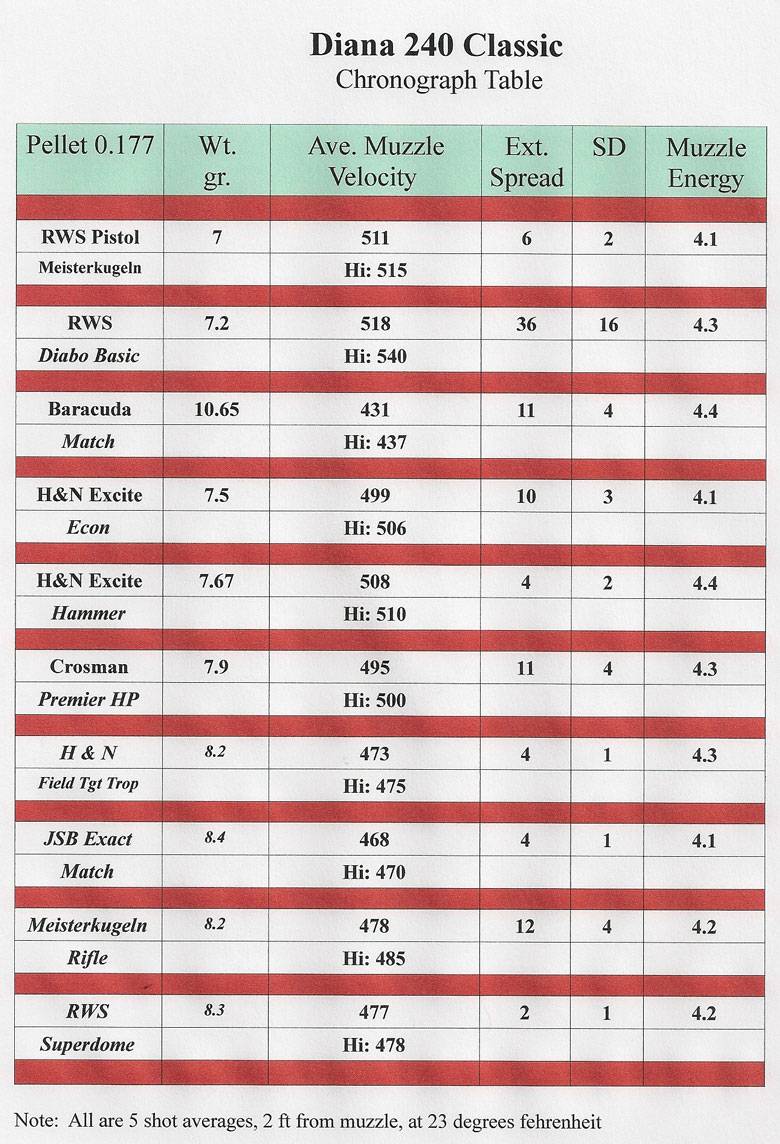 I set up my Oehler 33 chronograph with a 2-foot spacing and checked the ballistics of 10 different pellets from my inventory.  The Diana 240 Classic is rated at 580 FPS. But factory ratings generally overstates what you will get with the medium-weight  lead pellets you are apt to be using on a regular basis.

The results didn’t match the factory rating. But the velocities are well suited to a gun primarily designed for youngsters just graduating from their Daisy.

The 7.0 grain RWS MK Pistol pellets averaged 511 FPS, with a Standard Deviation of  just TWO FPS. In fact, nine of the ten pellets listed had a 5-shot Standard Deviation ranging from one to four. And this at a morning Michigan temperature of 23 degrees.

I suspect the velocities would have been slightly higher at 72 degrees, but I’d have to wait 3-4 more months to prove my point.

I used the data to set up a Point of Impact (POI) ballistics table using the American Airgunner Ballistic calculator. As you can see, the Diana 240 Classic is not a long range gun. But using the Hawke scope mounted with the Mantis Dovetail 1-inch rings included in the Premium Bundle, the trajectory will remain within an inch of the bull to nearly 30 yards. 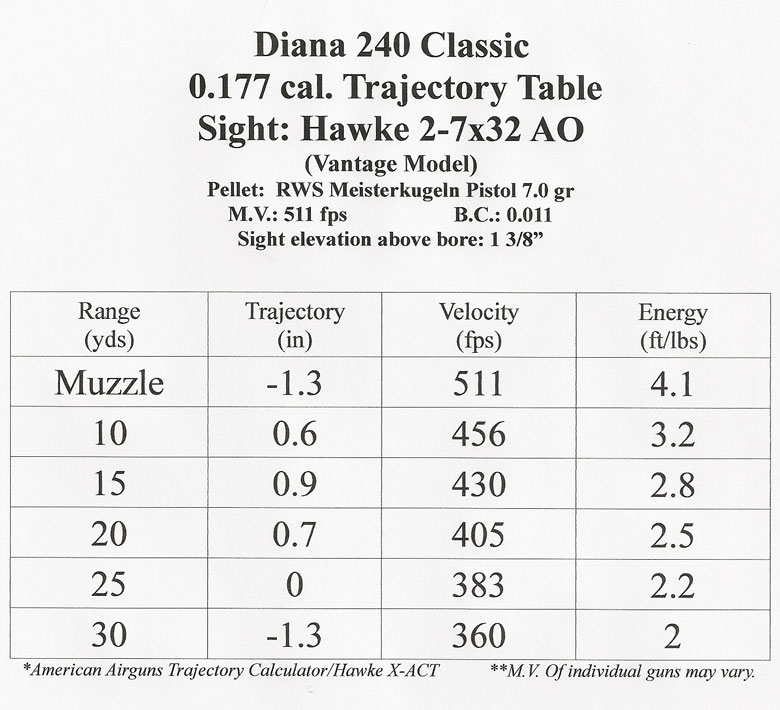 I haven’t said much about the Hawke 2-7×32 AO (Vantage) Sport Scope bundled with the Diana Classic. That is because I am so impressed with the quality and performance of this optic, that it deserves a separate review.

The English-inspired Hawke scope is supported by a downloadable program (X-ACT) which adds a tremendous amount of field utility to this very affordable optic.

Next time we’ll shoot some targets with the Diana 240 Classic and get a sense of the pellets which produce the best groups. Then I’ll turn the gun over to an expert.That would be 10-year old Logan Korson. He will give you a kid’s eye view of this quality air rifle.

Logan’s coach and father (Spencer Korson) will supervise Logan’s orientation to the Diana 240 Classic. We’ll follow that with reviews of the Hawke scope and X-ACT Ballistics program which can turn you or your youngster into an aspiring professional airgunner. 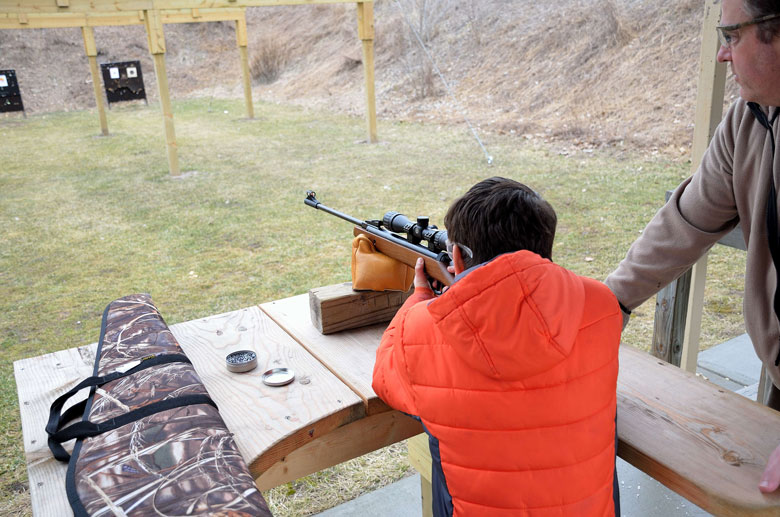 Jak and Abby will safeguard the Diana 240 Classic until we meet on the range with Logan and Spencer Korson! 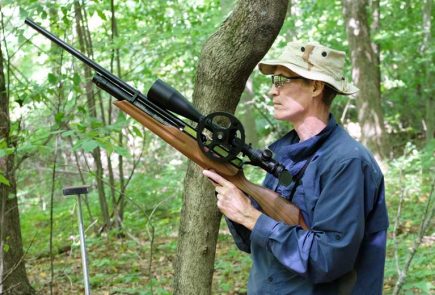