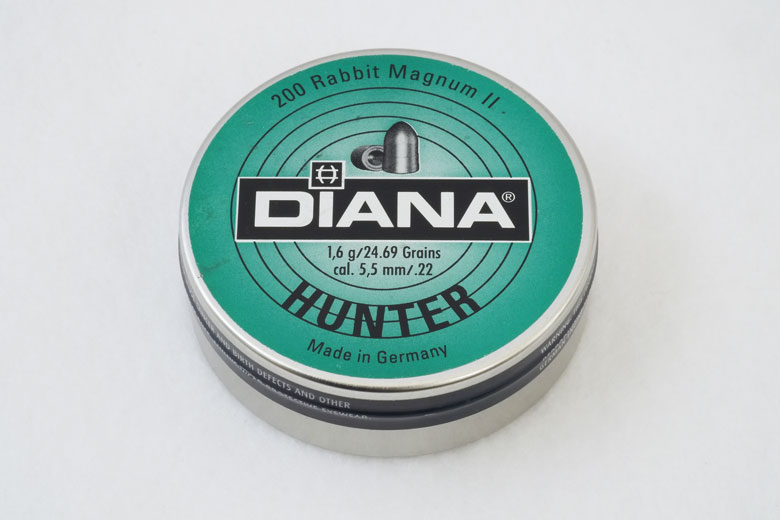 Manufacturing consistency is not bad, but unfortunately not good enough to achieve a HAM Award due to the relatively high price being asked.

47%
HAM Rating
You have rated this
Full Review

Diana Hunter pellets are manufactured by H&N for Diana. There’s nothing unusual in this – H&N manufactures pellets for many other airgun brands. But in this case, Diana makes no effort to hide the manufacturer, crediting the pellets as being “Rabbit Magnum II” – a well-known H&N design.

These Diana Hunter pellets are a very heavy “magnum” pellets, specifically for use with powerful PCPs. They have a “bullet” shape, rather than the wasp-waisted “diablo” shape of most airgun pellets. This gives them a very high Ballistic Coefficient of 0.037 – as measured in HAM testing.

This high BC means that they retain velocity – and energy – well as they travel downrange. This makes them a strong candidate for use in airgun hunting. If you have an air rifle powerful enough to propel them fast enough! 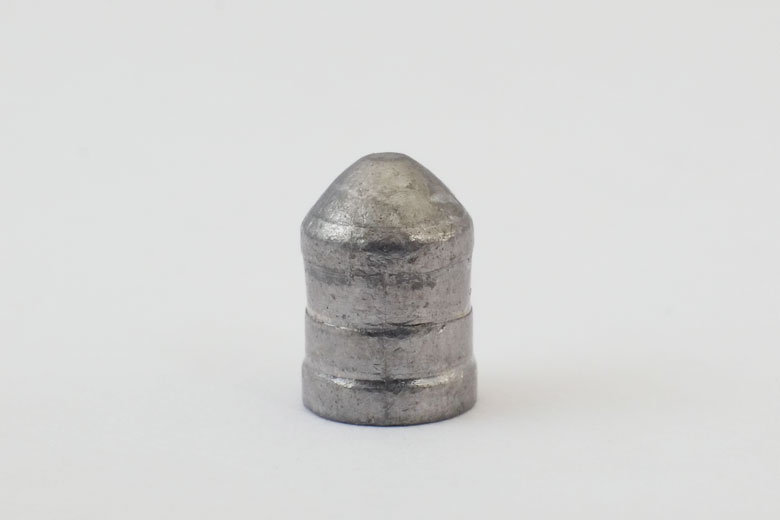 At a selling price of $12.60 for a tin of 200 pellets in .22 caliber, these Diana Hunters are expensive at 6.3 cents each. Obviously a lot of that cost is inevitable as they contain such a large mass of lead.

The Diana Hunter pellets are packed in a tin of 200. The sample tin tested by HAM contained 197 pellets – just 1.5% short.

The manufacturer also gives a weight for these pellets of  24.69 Grains. HAM testing found the average weight to be even higher, at 25.21 Grains. (This is probably why the number of pellets in the tin was a little low, if they were packed by weight). In fact, all the pellets in the HAM test sample were heavier than the specified weight, none being as light as 24.69 Grains.

Airguns of Arizona describes these pellets as being “Very heavy hunting .22 pellet with high penetrating power. For air rifles with more than 20 Ft/Lbs.” The HAM Team agrees with this description.

Admittedly, our standard pellet test air rifle – a Beeman 1074 “1,000 FPS springer” is insufficiently powerful to use the Diana Hunter pellets effectively. The average Muzzle velocity was just 483.5 FPS. However, the Standard Deviation of the test shots was fairly high at 11.09 FPS.

There were no damaged pellets found in the tin of Diana Hunters we tested.

Head diameters were large for the Diana Hunter pellets tested by HAM. They started at 5.54 mm and extended all the way up to 5.59 mm. This means that, apart from needing a powerful PCP, they also will work best with one having a barrel that “likes” larger head sizes.

The variation between the smallest and largest head diameters was 0.9%. 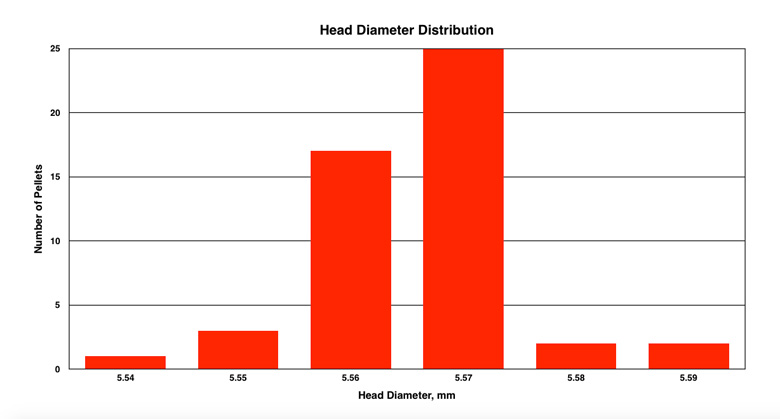 The average length of the Diana Hunter pellets tested by HAM was 8.07 mm. The most common length was 8.06mm and 18% of the pellets were this long. As you can see from the chart below, most pellet lengths ranged between 8.00 mm and 8.17 mm.

However, there was one short pellet at 7.81mm. This was clearly an outlier from the vast bulk of the Diana Hunter pellets tested. 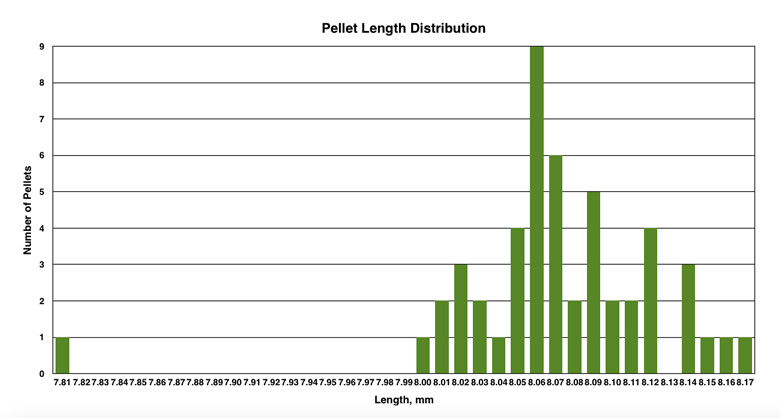 The variation in weight between the lightest and heaviest pellets was 4.61%. 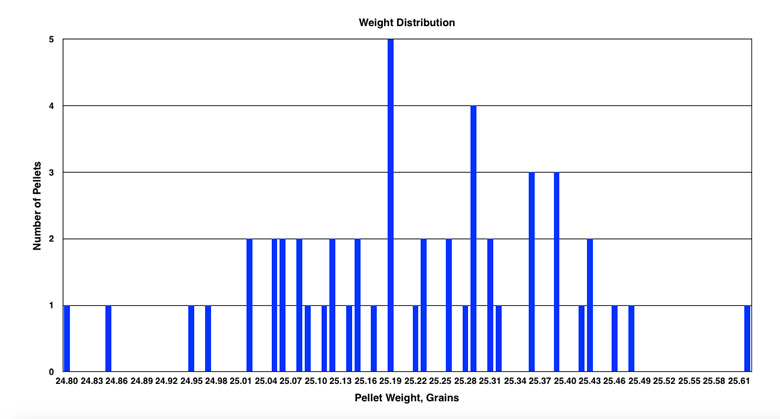 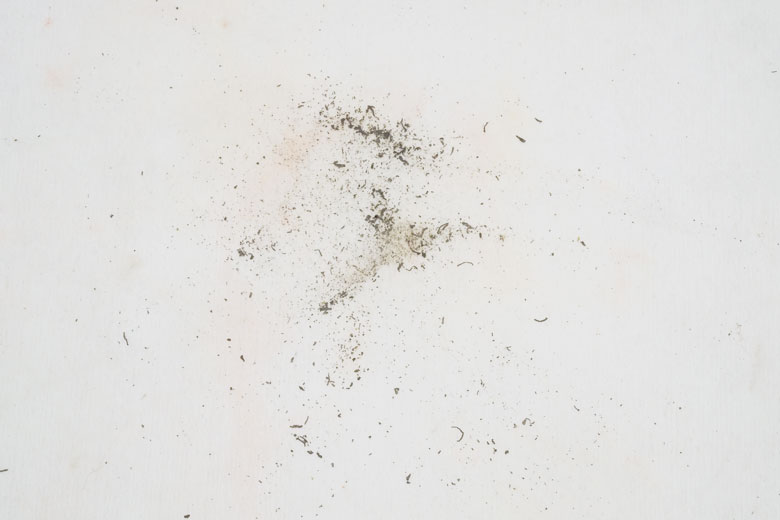 There was  0.787 Grains of lead dirt and dust in the tin of Diana Hunter pellets tested by HAM. This equates to 0.393 Grains of dirt per 100 pellets. This is quite a high figure, although some dirt, swarf and other junk is inevitable in the production of lead pellets . Some of course makes its way into the tin…

With its high Ballistic Coefficient, Chairgun shows that the Diana Hunter pellets retain no less than 70% of their energy as far out as 56 Yards.

Even with the low power of the HAM test gun – just 13.09 Ft/Lbs with these pellets – the heavy Diana Hunter pellets would give an effectively  “flat” shooting range from the muzzle out to 26 Yards. Of course, this would be much further with a high-powered air rifle.

Again, the high Ballistic Coefficient and heavy weight makes the Diana Hunter pellets a strong choice for hunting small game and pests with a powerful PCP air rifle that “likes” their large head diameter. The high energy retention at range gives the shooter much relief from concern over making a humane, one shot kill on the target.

As we can see from the photograph below, penetration into the ballistic soap was considerable at 63 mm. The straight wound channel was narrow – just 7 mm wide – however. 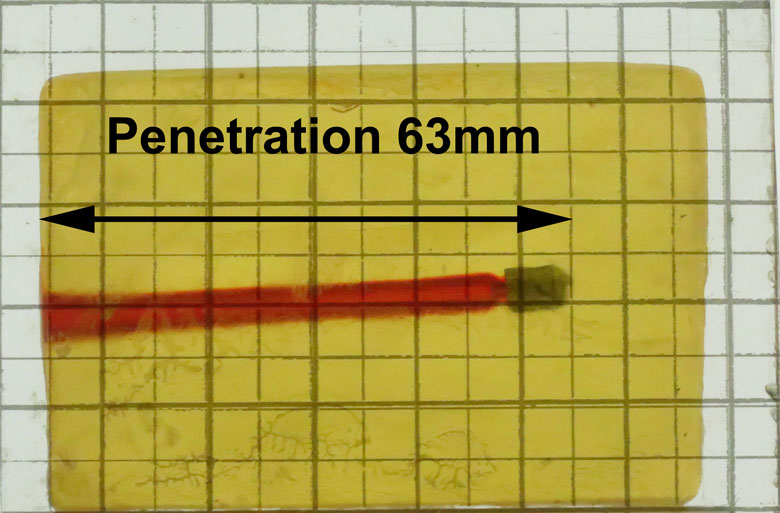 When extracted from the soap block, the Diana Hunter pellet was found to be just slightly truncated in length, as can be seen from the photograph below. The pellet showed no expansion in diameter, however, indicating again that 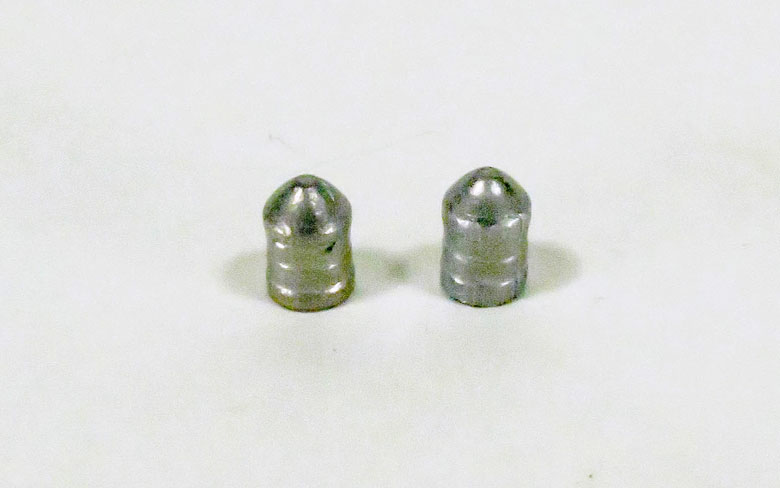 The Diana Hunter pellets are packaged in a screw-top tin of standard size. As a specialist brand, these pellets are not likely to be found in “big box” stores. However, they are readily available from Airguns of Arizona and Precision Airgun Distribution dealers. 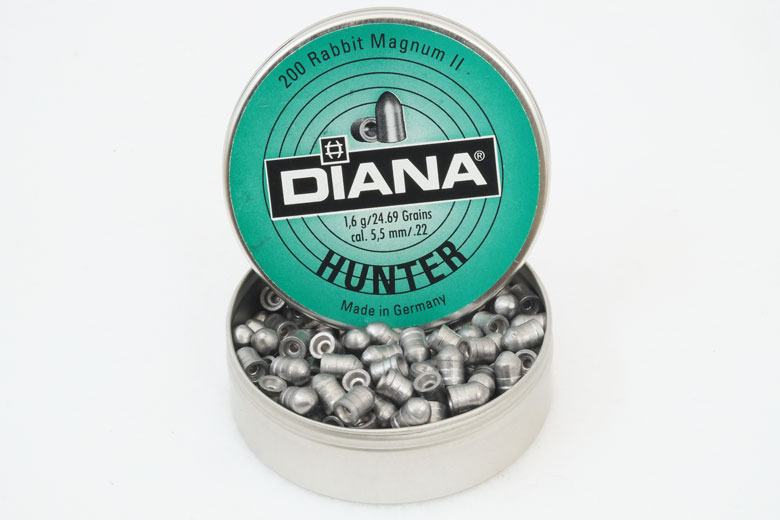 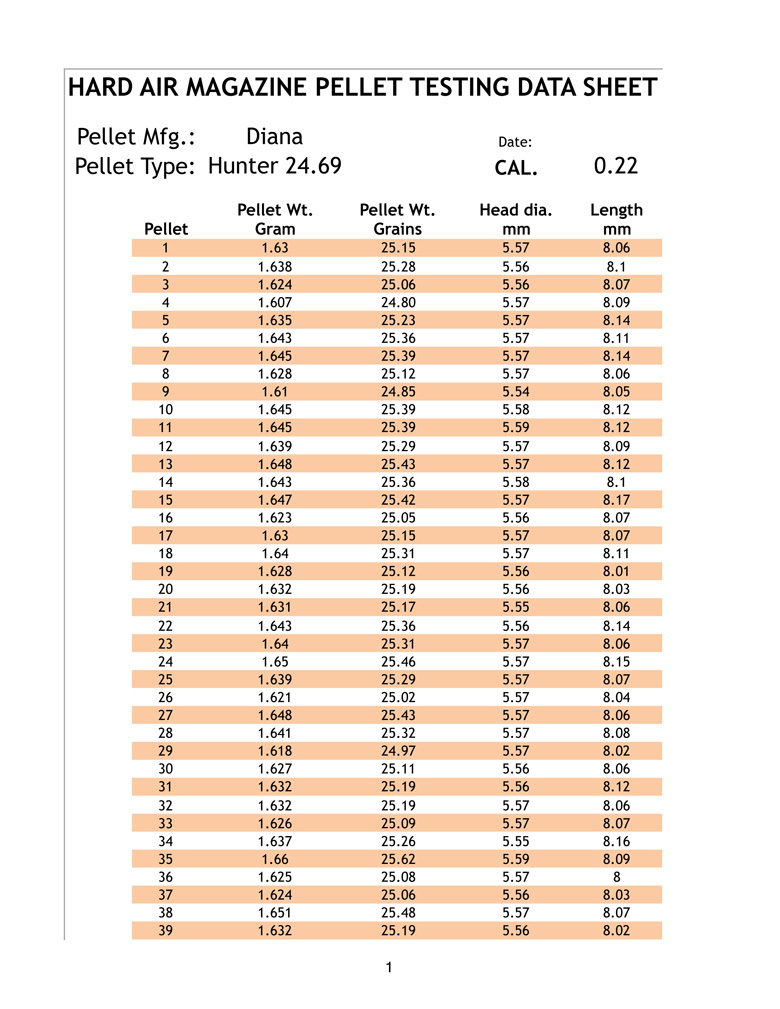 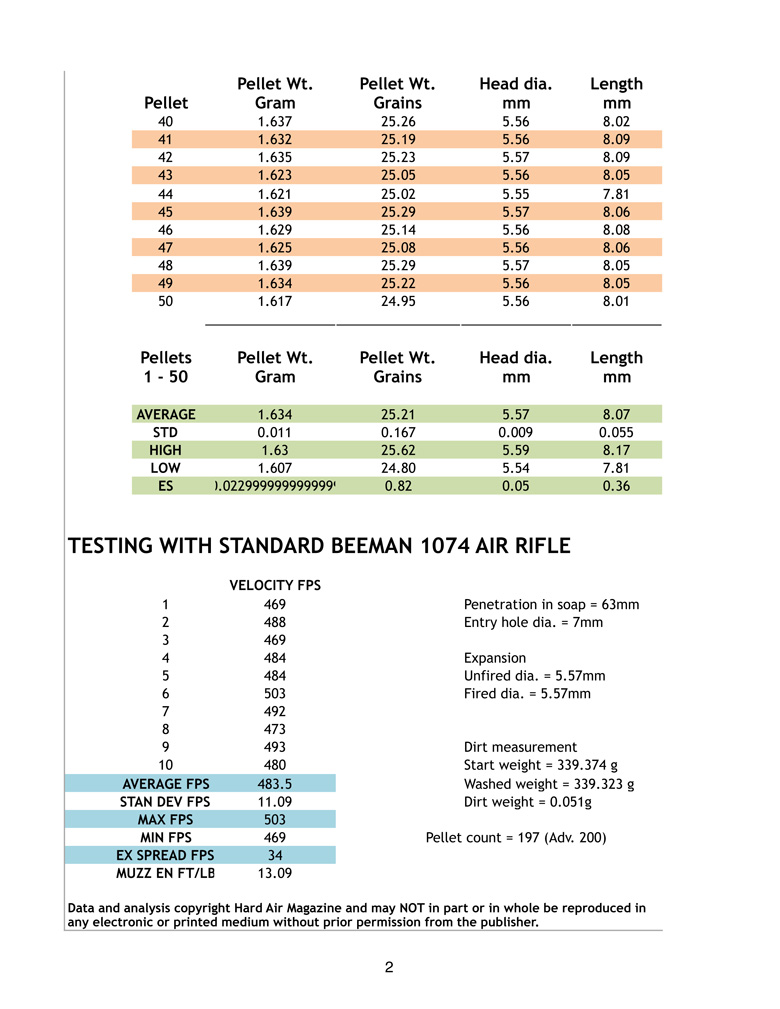