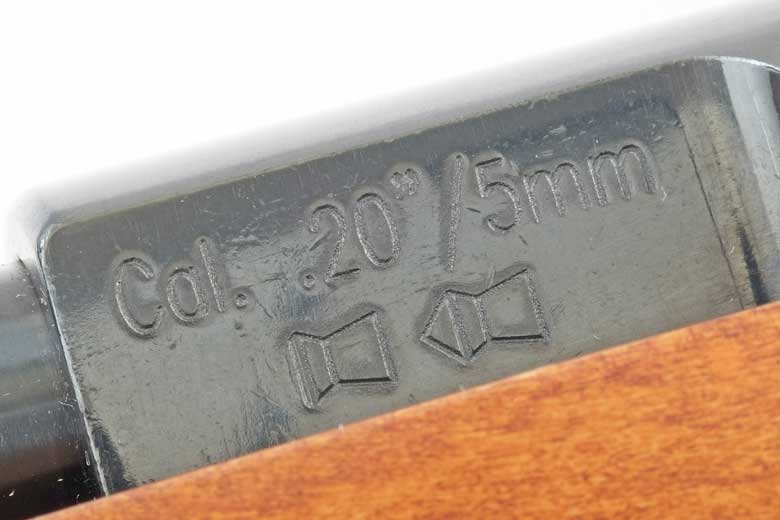 As Doug is a long-time PCP shooter and Field Target competitor, I had to ask him about his choice…

“Well,” said Doug, “As you know, I’ve always been a huge Weihrauch fan. I love my HW100 PCP air rifle and thought it would be interesting to try a Weihrauch springer. And I’ve always wanted a 97.”

Doug went on to explain that the HW97K underlever was an obvious choice for him. It had received great reviews in the comprehensive HAM test review some time back. Like the HAM test gun, his gun is fitted with a thumbhole stock, which Doug also favors.

In fact, the .177 caliber HW97K had achieved a score of 89% and earned a HAM Gold Award on test. This remains one of HAM’s all-time most popular air rifle test reviews.

Doug was also attracted by the benefits he felt must be inherent in a fixed-barrel springer.

So why a .20 Caliber gun? It turns-out that Doug had been looking at the Airguns of Arizona website and seen a great deal on a .20 cal HW97K. As he was going to buy a – for him – very unusual air rifle, why not make it in an unusual caliber too?

In fact, Hard Air Magazine has never tested a .20 cal air rifle. It’s become something of a forgotten caliber, although a small number of air rifles – including the HW97K – are available with this bore diameter.

Having received the air rifle, Doug attached a favorite 4.5-14 x 42 Hawke Sidewinder scope using a set of SportsMatch rings. Then he was ready to go! 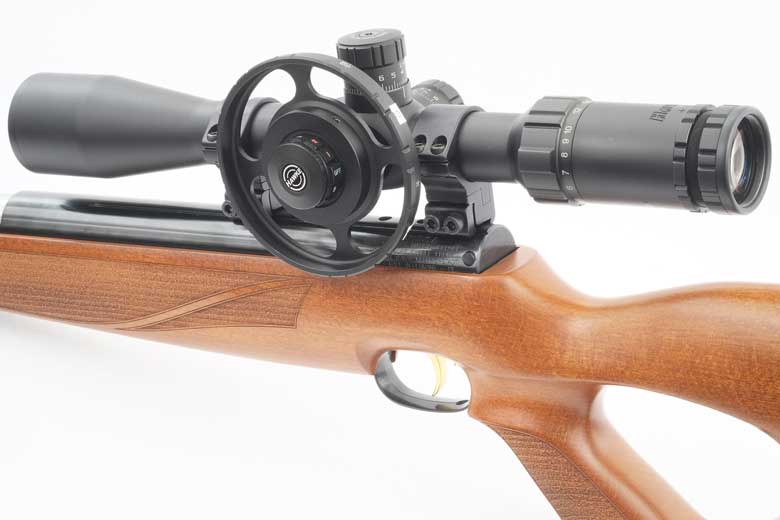 Doug is also interested to see how the .20 caliber will perform for him. Like most of us, he’s read all that stuff about .20 combining the benefits of .177 and .22 caliber pellets. Some say that .20 cal. is a better caliber than either.

Is that true? Doug plans to form his own opinion based on his experience with this gun.

Then, of course, there was the issue of finding those .20 cal. pellets…

Without too much trouble, Doug was able to find .20 caliber pellets from both JSB and H&N online. Being a testing expert and understanding the potential for different results with different pellet types, he bought a tin each of these four:

He’s expecting to shoot paper targets and possibly Field Target paddles with his HW97K. Otherwise, he would definitely have included some Polymags.

“Yes there’s a limited selection of pellets available in .20 caliber,” Doug continued. “But I knew that before I bought the gun.”

On receiving his new air rifle, Doug was not disappointed. “I just love the appearance and finish of the HW97K”, he said. “But then it’s a Weihrauch!” he added!

It’s definitely true that Doug’s new air rifle has the expected perfect metal finish. Combined with the deep, uniform bluing of the steel parts and the flawless finish of the walnut-stained Beech stock, the gun really looks outstanding.

Doug also finds that Weihrauch stocks generally “fit” him very well. That’s been the case with his HW100 and the HW97K is also naturally feels good for him when he shoulders the gun. 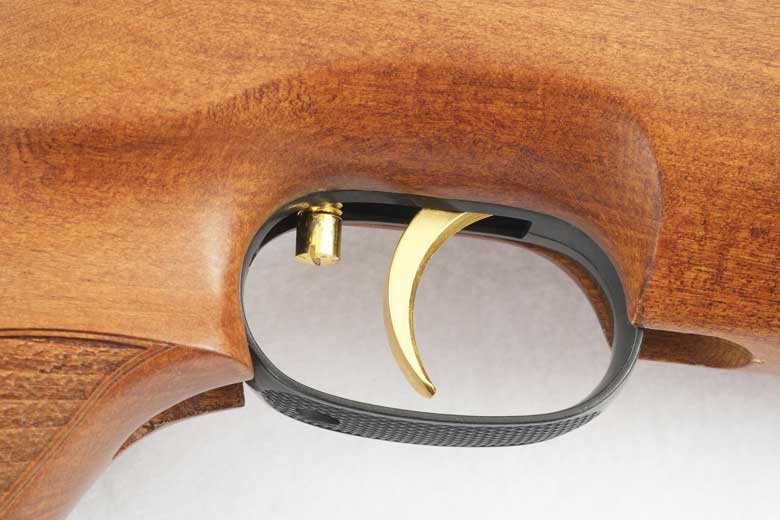 Then there’s the trigger. Doug was expecting to like the Rekord trigger fitted to his .20 cal HW97K. He’s not been disappointed…

That makes an average of 2 Lbs 4.1 Oz, with a variation of only about 2 Oz either side of the average. “Very consistent. I like the trigger.” Doug commented.

Note that the average trigger pull weight of the HW97K reviewed by HAM was 2 Lb 9 Oz. That’s very close to Doug’s gun and indicates the tight manufacturing tolerances the Weihrauch factory maintains in volume production.

Doug also noted that the cocking effort is OK for him and that he finds it easy to load. “And I haven’t run out of air yet!” he joked, being used – as he is – to shooting exclusively PCPs.

However he can’t get used to the automatic safety. “I understand why it’s done” he mused. “But I myself would prefer a manual safety.” 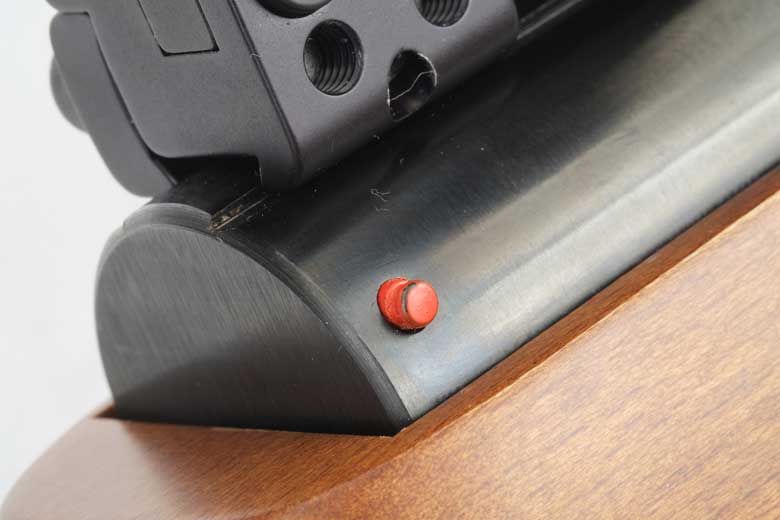 The complete rig of gun plus scope weighs-in at 11 Lbs 9 Oz. That’s pretty heavy but it feels quite manageable in the hand.

Having set-up his .20 cal HW97K and with a supply of pellets to hand, Doug shot some initial test targets for us.

He stresses that he is not an experienced springer shooter and feels that it could be more accurate in the hands of the right shooter. But he’s learning and I thanked him for sharing his experience. 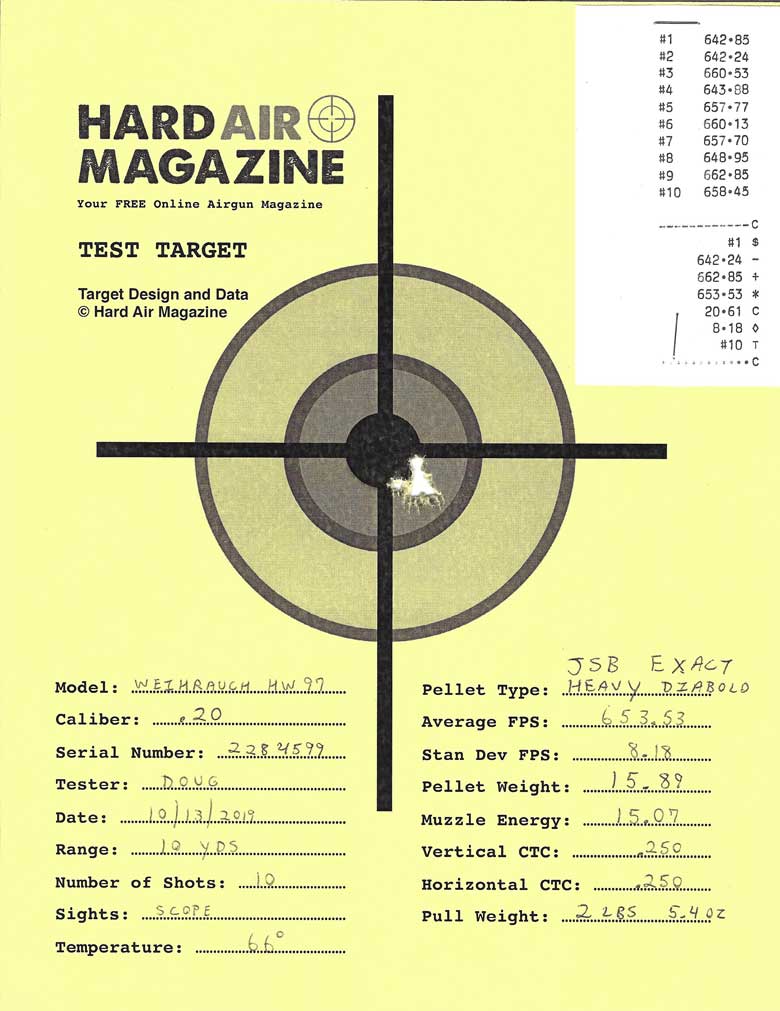 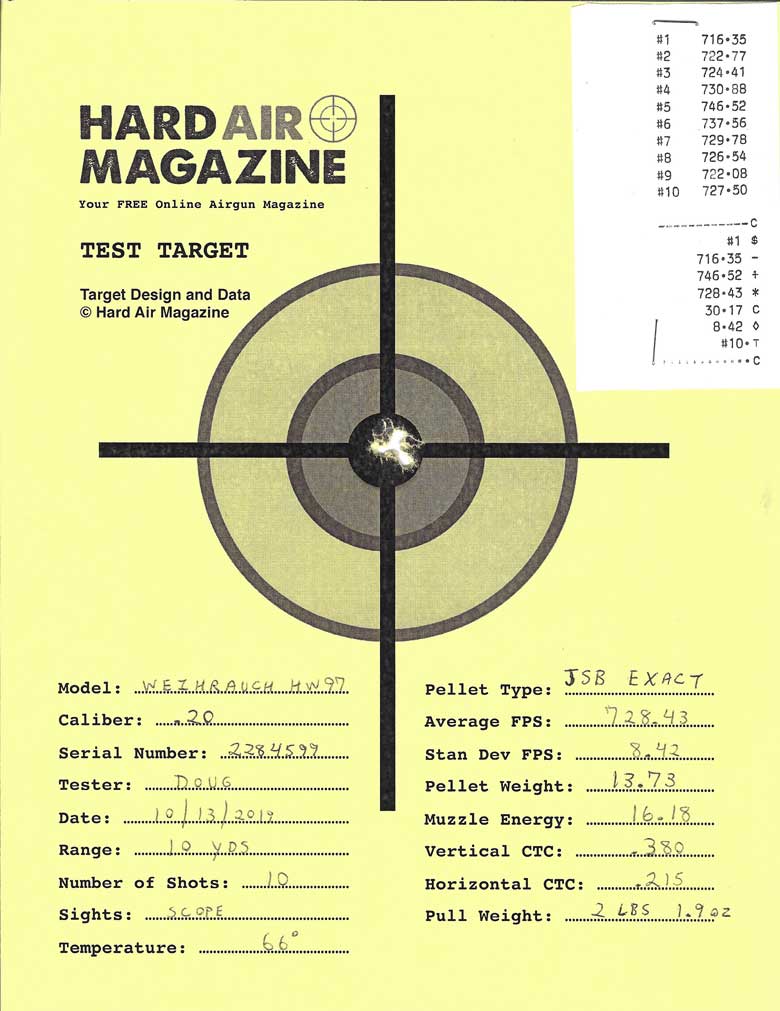 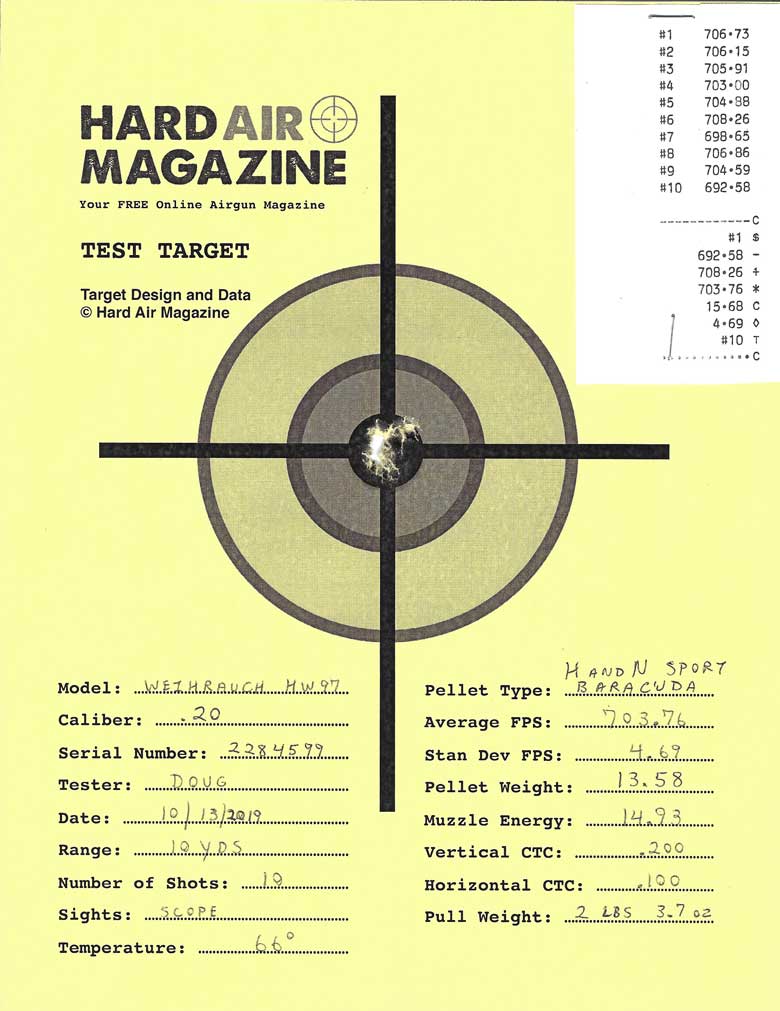 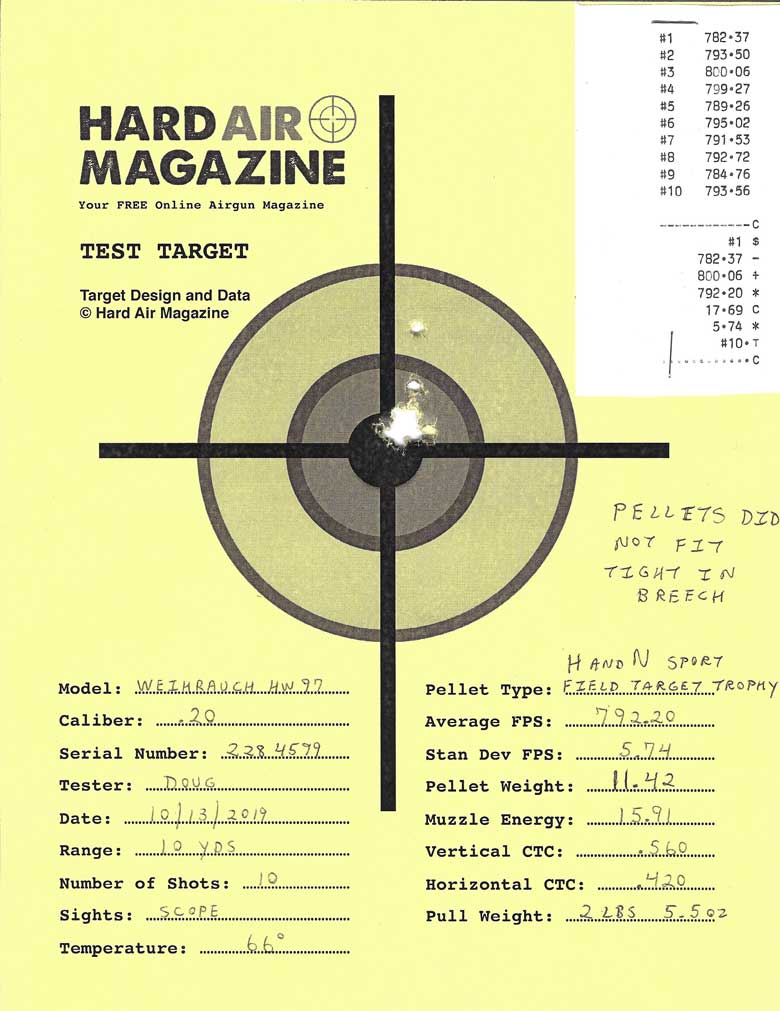 Given that these are some very early tests and Doug is learning how to shoot the gun, I’d have to say that this is excellent accuracy!

Doug was not surprised that the H&N Field Target Trophies showed a somewhat ragged performance. This was because they were a somewhat loose fit in the breech of his particular air rifle.

He knows from extensive HAM-testing experience that loose-fitting pellets usually tend to spread-out on the target, even if the pellets themselves are of high quality. That’s a result of the pellet/barrel interface rather than a function of just the pellets or barrel alone.

Doug is brutally honest and objective in his judgements – that’s why he is a great HAM tester! Here’s his conclusions on his new air rifle.

What I do know is that Doug is having a great time shooting his HW97K! 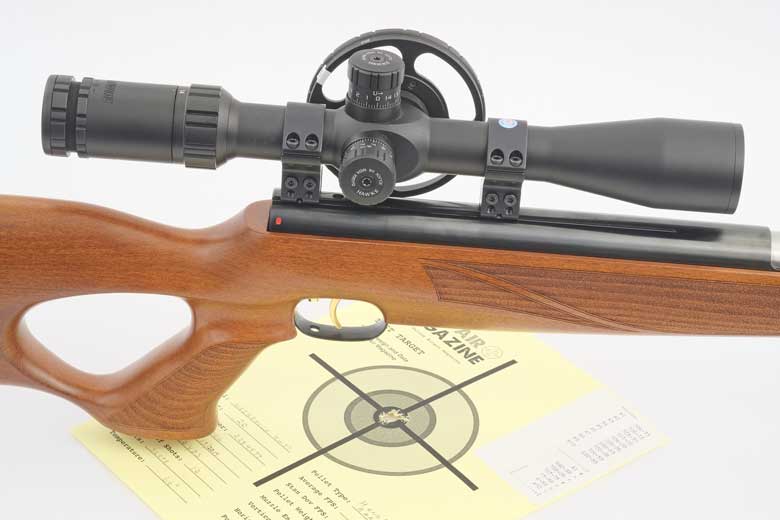 This .20 cal HW97K has been a whole new shooting experience for one die hard PCP shooter. He’s keen to explore its capabilities at longer range and to see how .20 caliber pellets behave in the wind.

It’s possible that Doug may develop into a convinced springer guy with time. Let’s see…

Finally, Airguns of Arizona currently has some special deals on HW97s in all calibers. You may want to check them out yourself!