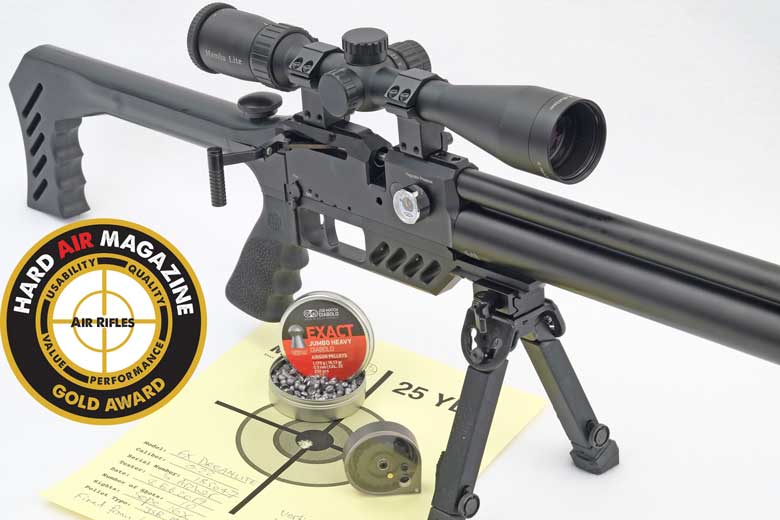 The FX Dreamlite air rifle offers a wonderful shooting experience. Accuracy is outstanding, the trigger and cocking action are sublime. Consistency is top class, too.

Seen as an air rifle alone, the Dreamlite provides great value. However, it moves to a completely different level if its potential for versatility is included. Here is an air rifle that can evolve with you as your shooting interests change over time. It's a capability unmatched by any other airgun in the market today.

At a Street Price of $1,179 (with moderator), the FX Dreamlite air rifle is not exactly cheap. However, it is priced considerably lower than many other FX models such as the Wildcat, Crown and Impact.

Its price is actually much closer to that of the FX Streamline. Compared to that model, the Dreamlite offers much more versatility. Rather than being “just one gun”, the Dreamline range – including the Dreamlite – really provides the entry into a complete shooting system.

Ownership of any Dreamline air rifle gives you a potential future choice of stocks (wood and synthetic), configurations (takedown, regular and bullpup), calibers, power levels, barrel liners and more. This “system” approach can provide huge value for the airgunner interested to explore its possibilities.

Yes, making changes and upgrades costs money – of course – but it gives the enthusiastic owner many opportunities to customize his/her airgun. More importantly, Dreamline ownership allows the gun to change and evolve in line with the shooter’s interests.

This .22 caliber FX Dreamlite air rifle tested by HAM could be converted by the user in future into a .30 caliber bullpup, if required. That’s just one example of the flexibility on offer from the Dreamline platform. For many owners, that’s huge value – not to mention the quality, accuracy and overall performance…

As always in a HAM air rifle test review, we have used the standard suite of .22 caliber HAM test pellets to test the FX Dreamlite air rifle. However, on this occasion, we have added one more pellet to the range. This is the 18.13 Grain JSB Exact Jumbo Heavy.

This is an unusual – and explicit – pairing of pellet with air rifle and so the HAM team added the 18.13 Grain JSBs for that reason.

Of course, the standard HAM 10-Yard test targets (at the foot of this review) show the expected spread of accuracies, with mid-weight and heavier lead pellets being the most accurate.

But the test targets for the 18.13 Grain JSBs give accuracy of a completely different order! 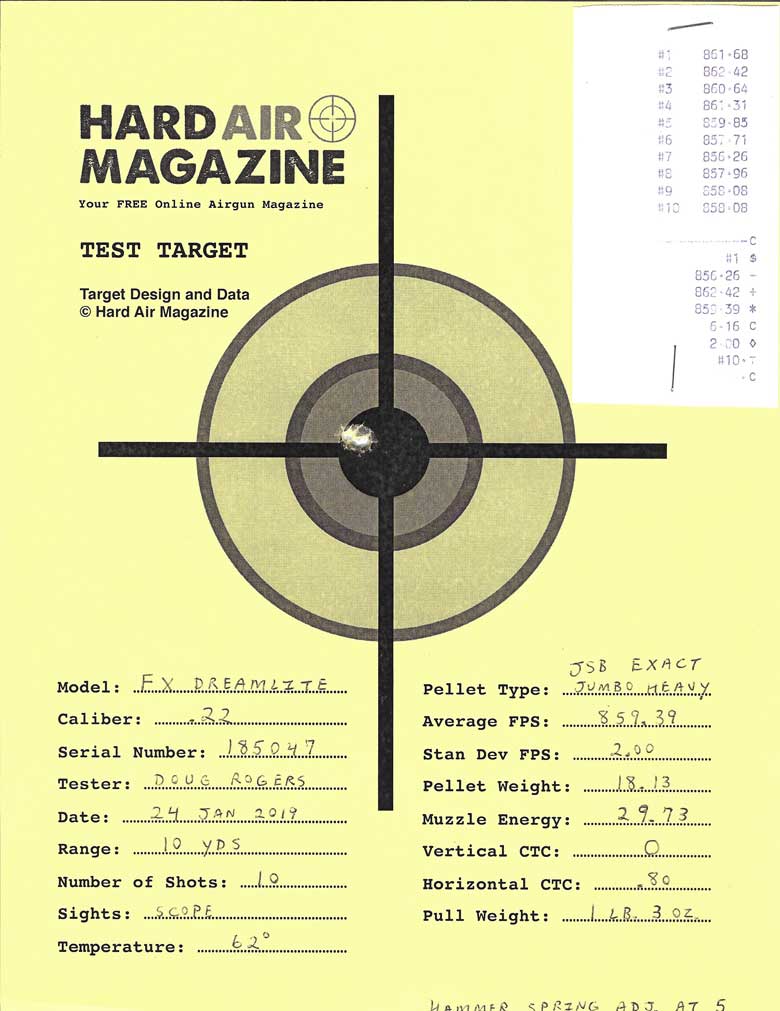 … and here’s the 25 Yard target. Yes, it was shot from a bipod, but that’s still pretty impressive accuracy for a 10-shot group! 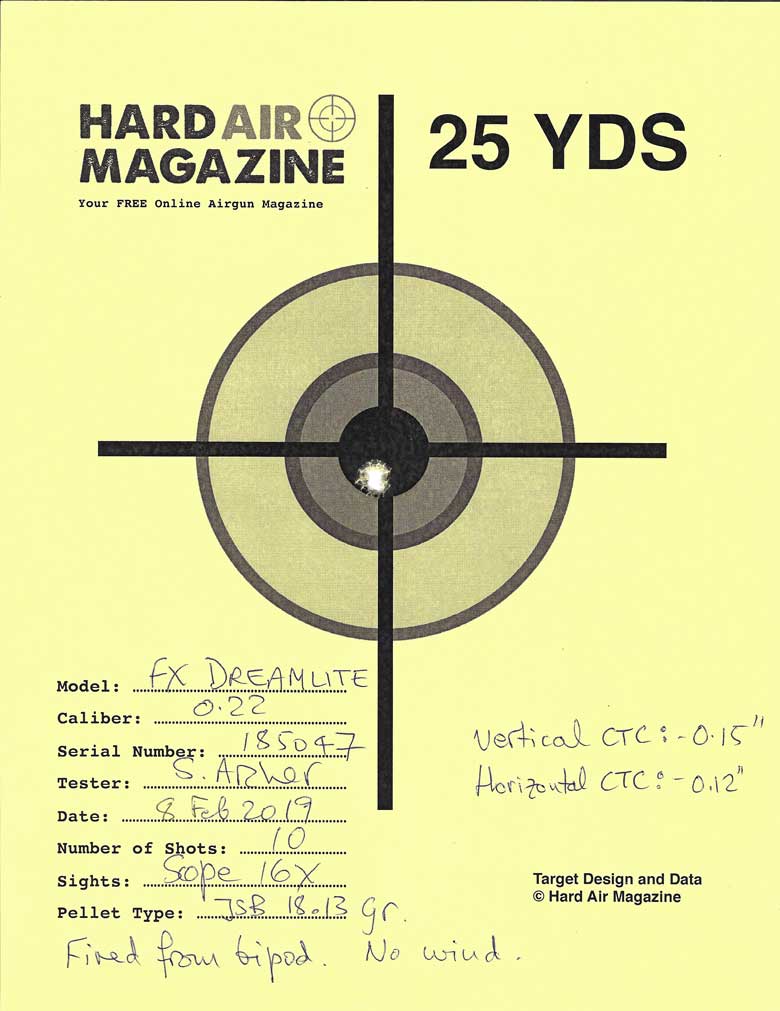 The highest Muzzle Velocity recorded by HAM when testing the FX Dreamlite air rifle was 1035 FPS with the ultra-light Gamo Platinum alloy pellets. The highest speed for lead was using the 7.0 Grain RWS Hobby pellets, at 966 FPS.

But, of course, owners of the FX Dreamlite air rifle will be aware that maximum Muzzle Velocity is unlikely to be accompanied by maximum hitting power or accuracy. That’s certainly the case here!

The best accuracy was achieved with the 18.13 Grain JSBs shooting at 859 FPS with a Muzzle Energy of 29.73 Ft/Lbs. That’s what the FX Dreamlite air rifle is designed to do and that’s what it does best.

If required, FPS and power can be controlled by using the hammer spring adjustment wheel above the pistol grip. This can be seen in the photograph below. 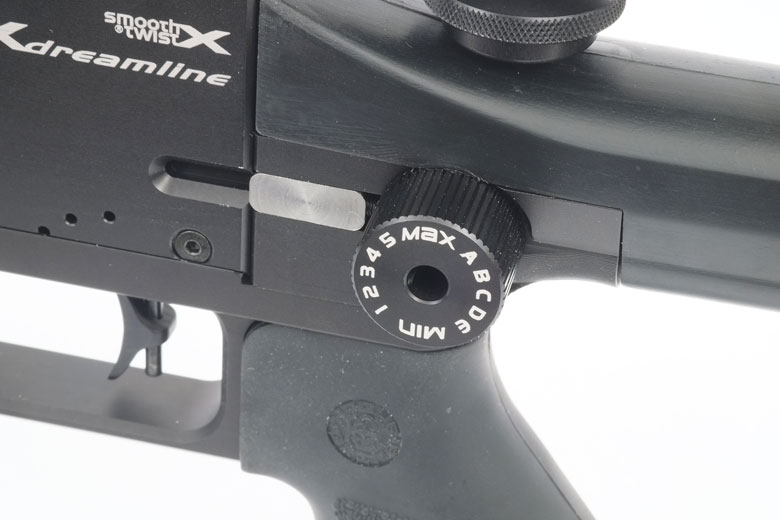 Everyone has very high expectations for the trigger on any FX airgun. Certainly the FX Dreamlite air rifle tested by HAM did not disappoint!

Straight from the box, the two-stage trigger felt light, yet easy to control. It was easy to know when the sear would be released and consistency was outstanding.

The average trigger pull on the Dreamlite tested by HAM was just 1 Lb 1.8 Ounces. As always, there’s multiple adjustments available with the FX trigger but – again as always – HAM testers find that trigger to be just about perfect just as it ships from the factory! 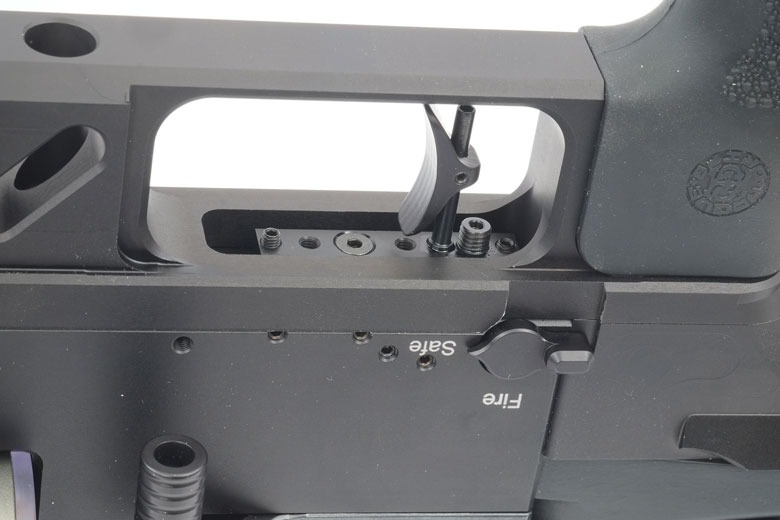 The side lever cocking mechanism is buttery smooth too. It feels sublime to operate!

One thing to be aware of is that the cocking handle is very close to the installed magazine, as can be seen in the photograph below. Both Doug and Stephen knocked their fingers against the magazine when reaching for the cocking lever handle at first.

But muscle memory then set-in. After a few shots, that ceased to be an issue and we were able to enjoy operating the cocking lever without any issues. 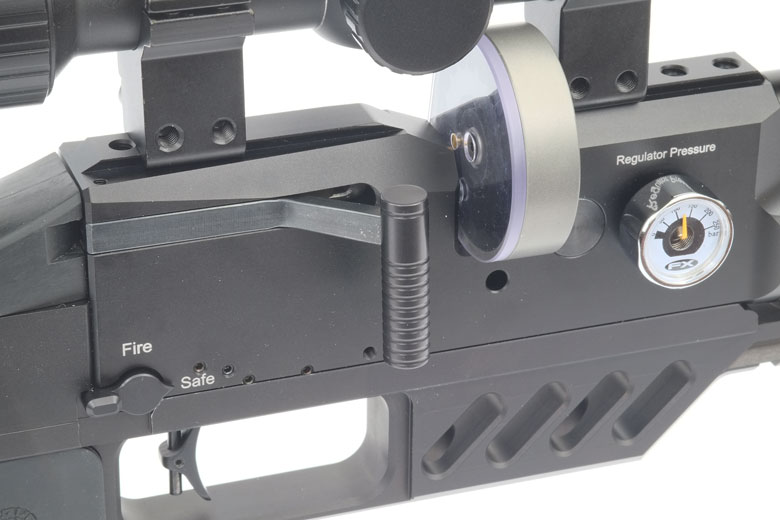 As with most manufacturers of high end air rifles, FX makes few specific performance claims for the Dreamlite.

In .22 caliber, the FX Dreamlite air rifle is specified to achieve Muzzle Energies of up to 32 Ft/Lbs. HAM achieved over 30 Ft/Lbs with 21.14 Grain H&N Baracuda Match pellets. As power increases with pellet weight in PCP air rifles, it’s pretty clear that a heavier pellet will reach the claimed 32 Ft/Lbs Muzzle Energy level.

FX says that the Dreamlite can achieve “up to 80 shots per fill”. Based on the HAM shootdown test below, it’s also clear that this is a true statement. However, it’s achieved only with a very significant drop in Muzzle Velocity – and therefore stringing vertically down the target.

What most shooters actually want to know is the number of consistent shots per fill. That is, before the regulator set pressure is reached.

We can see the answer to that question below. The FX Dreamlite air rifle tested by HAM achieved 52 consistent shots per fill from its 250 cc HPA tank.

As always with airguns from this manufacturer, the FX Dreamlite air rifle provided extremely consistent performance.

Standard Deviation – the statistical expression of variation between shots in a string – was also extremely low at an overall average of just 3.76 FPS. Again, exceptional performance.

The FX Dreamlite air rifle tested by HAM gave us 52 very consistent shots from one fill of its HPA tank. This performance was achieved using 16 Grain FX pellets. After falling below the regulator pressure, the Muzzle velocity fell away in a very consistent manner – as can be seen from the chart below. 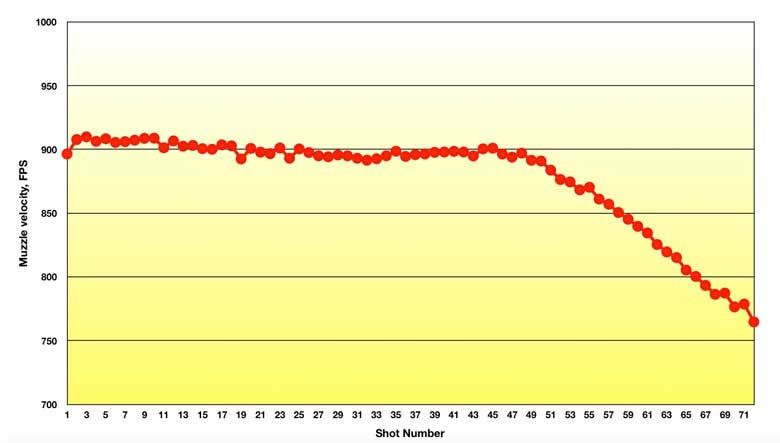 All the results in this FX Dreamlite air rifle HAM test review were obtained with the hammer spring adjuster set to full power. The transfer port adjuster was set to the “.177 .22” setting also. Obviously more shots per fill can be obtained by selecting low power settings on either adjuster – or both! 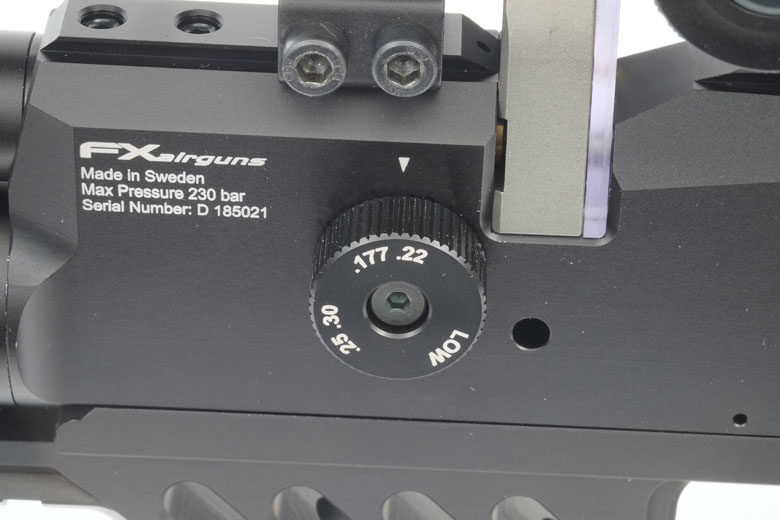 The FX Dreamlite air rifle is supplied with a shrouded barrel. This mutes the report to a fairly backyard-friendly level. However, it’s still subjectively louder than the Benjamin Marauder – HAM’s Gold Standard for noise levels.

However, FX Dreamline air rifles are available with the option of a Donny FL moderator. This will undoubtedly provide a significant further reduction in noise levels, should you choose to purchase this option. 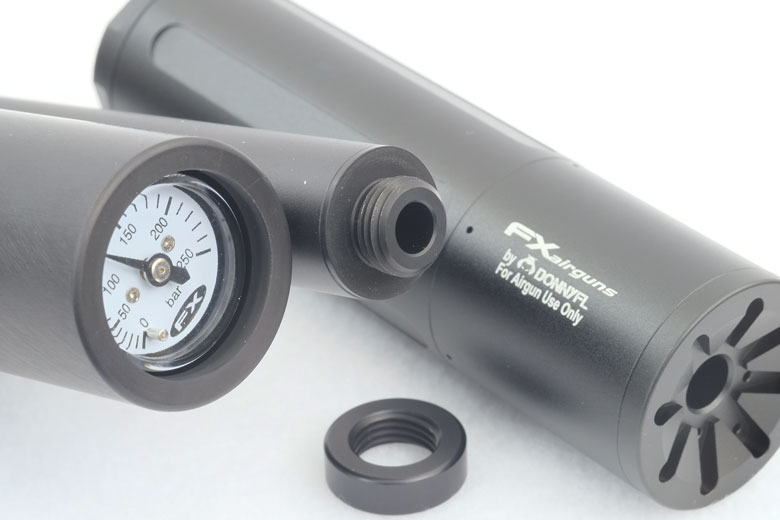 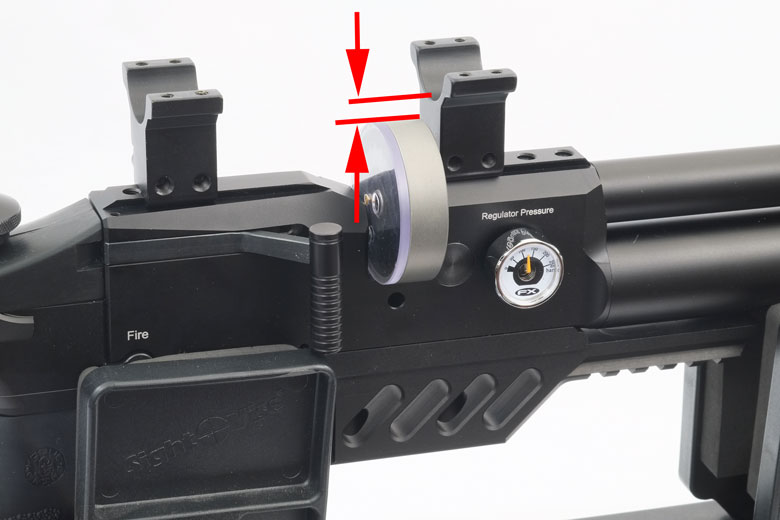 This need for high rings, combined with the low comb of the buttstock, gave the HAM Testers cause for concern about consistent cheek weld when shooting.

Yet surprisingly – and in spite of the lack of an adjustable buttpad – both Doug and Stephen found the FX Dreamlite air rifle easy to shoot. Both of us found a good cheek weld, instead of the “chin weld” which we were expecting!

Of course, the bullpup version of the Dreamline – the Dreampup – will benefit from high rings. And as the Dreamlite can be converted into a DreamPup configuration (and vice versa) the high rings requirement makes a lot of sense. 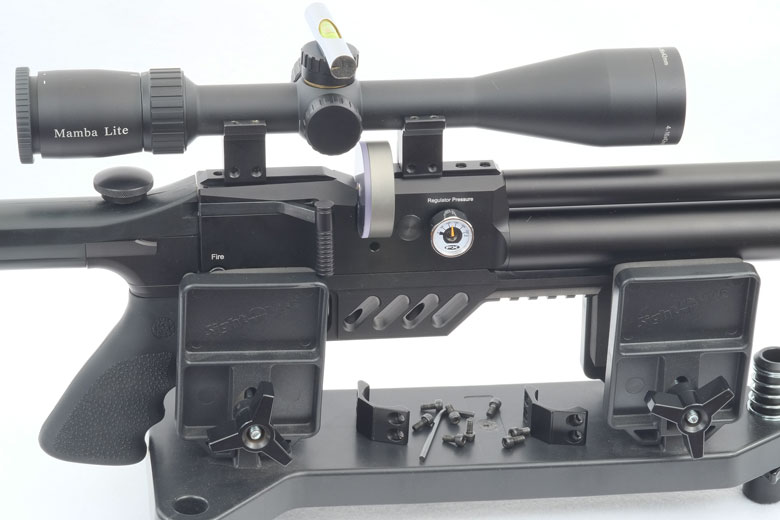 As anticipated, the FX Dreamlite air rifle was a pleasure to shoot! Balance is good and weight is light. 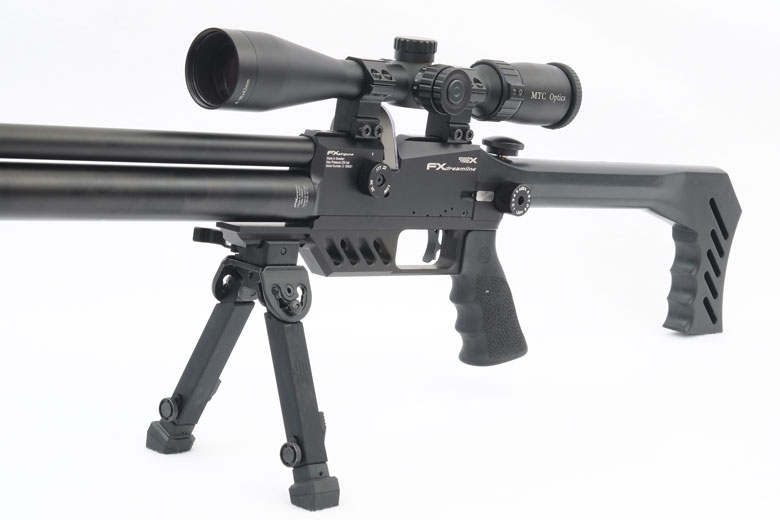 Given the perfect trigger and cocking action, the FX Dreamlite air rifle tested by HAM was a delight to shoot. We installed a UTG rubber armored bipod  to the rail ahead of the trigger. Stephen Archer shot the gun in that configuration for the 25-yard test, with the impressive results seen above.

Although the HAM testers wanted an adjustable buttpad, neither of us actually needed it. The gun shot just fine for us as it is. But there may be some folk out there who would need that buttpad adjustment capability…

As expected, the FX Dreamlite air rifle tested by HAM was beautifully finished. All visible metal parts had been lovingly machined and treated to an uniform matt black finish.

The buttstock showed a few machining and finish marks, but these were very minor and unobjectionable. 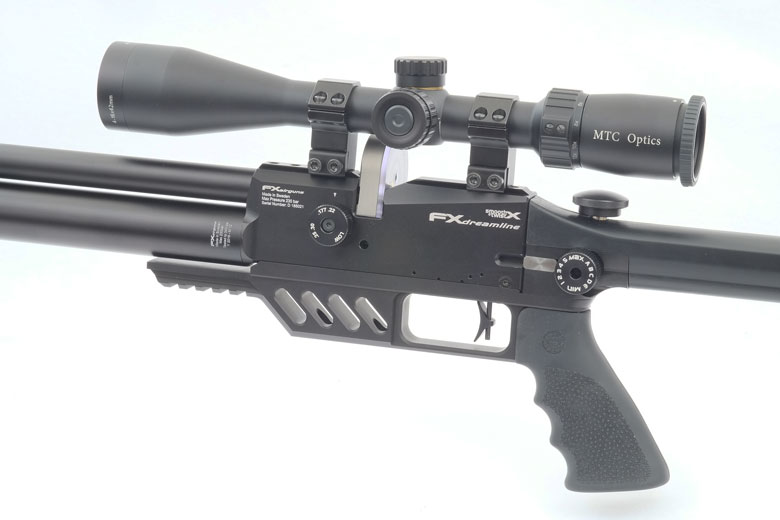 Appearance is – as ever – a personal opinion.

The HAM Team’s conclusion is that the FX Dreamlite air rifle looks rather long and gangly. Actually just like the two guys who tested it for this review!

There’s no denying the practicality of the Dreamlite’s design, complete with detachable buttstock using that rather obtrusive knob. It’s probably the lest attractive of the Dreamline family. At least in our opinion…

To us, the DreamPup looks chunkier, the DreamClassic more stylish. But then that’s why FX gives us so many choices with the Dreamline range!

The FX Dreamlite air rifle is readily available online and from specialist airgun retail stores around the country. The new 3-year warranty provided by FX Airguns USA gives assurance to the owner and brings FX into line with the majority of other airgun manufacturers.

The modular design makes it easy to install modifications and upgrades. We fitted a flat dark earth UTG Pro AR15 grip, for example. 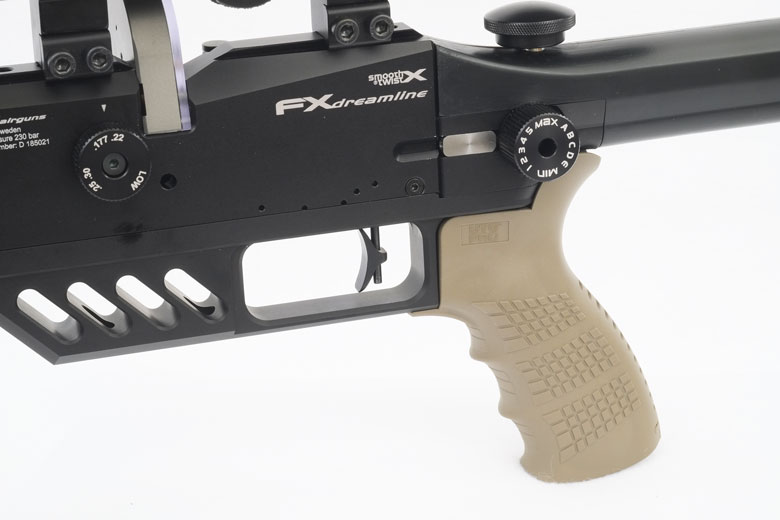 However, there are a couple design aspects that we would prefer to see implemented differently…

First is the location of the pressure gauge. This is located – in common with many other PCP air rifles – at the end of the HPA cylinder. This makes it close to impossible to read without looking down the barrel of the gun.

Given that an air rifle should NEVER be pointed at any person, it’s remarkable that it’s necessary to do this to yourself simply to read the pressure gauge. This is something that really needs to change throughout the PCP airgun industry!

We’d also like to see the fill probe machined with a 1/8-inch NPT standard male quick disconnect on the end. This is done by several – mainly Chinese – PCP air rifle manufacturers and is a very good idea. Otherwise it’s necessary to purchase and fit a separate adapter to the fill probe just to connect to the female quick disconnect of a HPA tank or compressor. (This adapter is not included with the gun).

Back on the positive side, the whole FX Dreamline platform provides unprecedented flexibility in changing stock configurations, looks and calibers. It’s clearly supremely adaptable and we can expect to see more upgrade kits and options become available from the manufacturer in future. 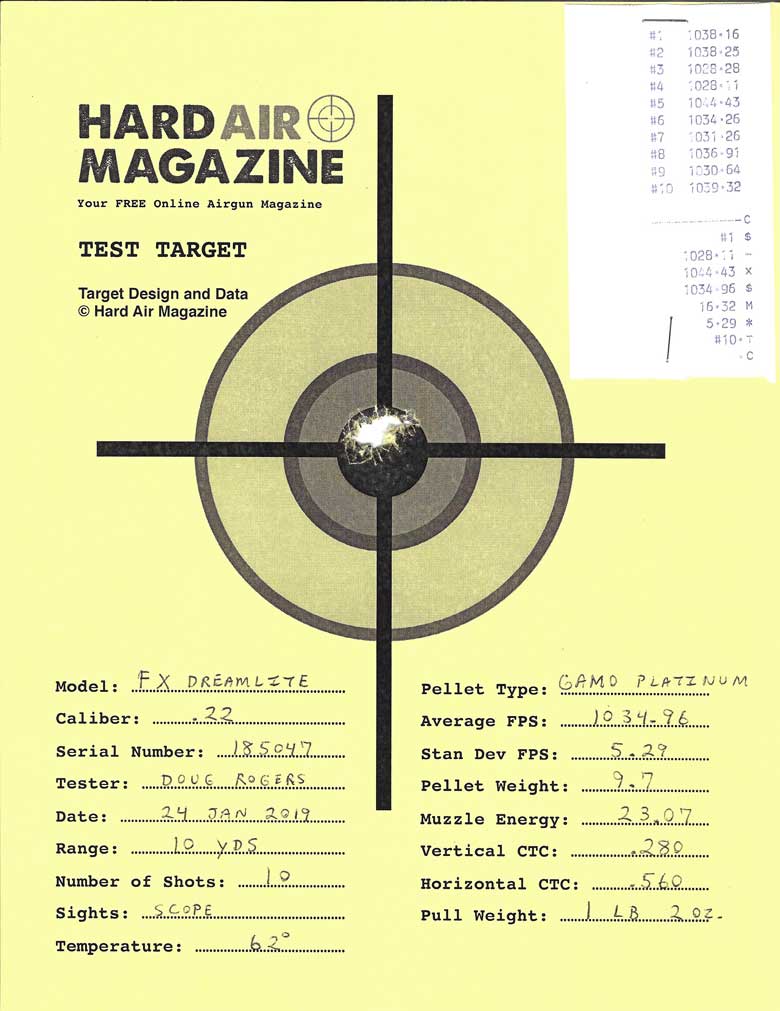 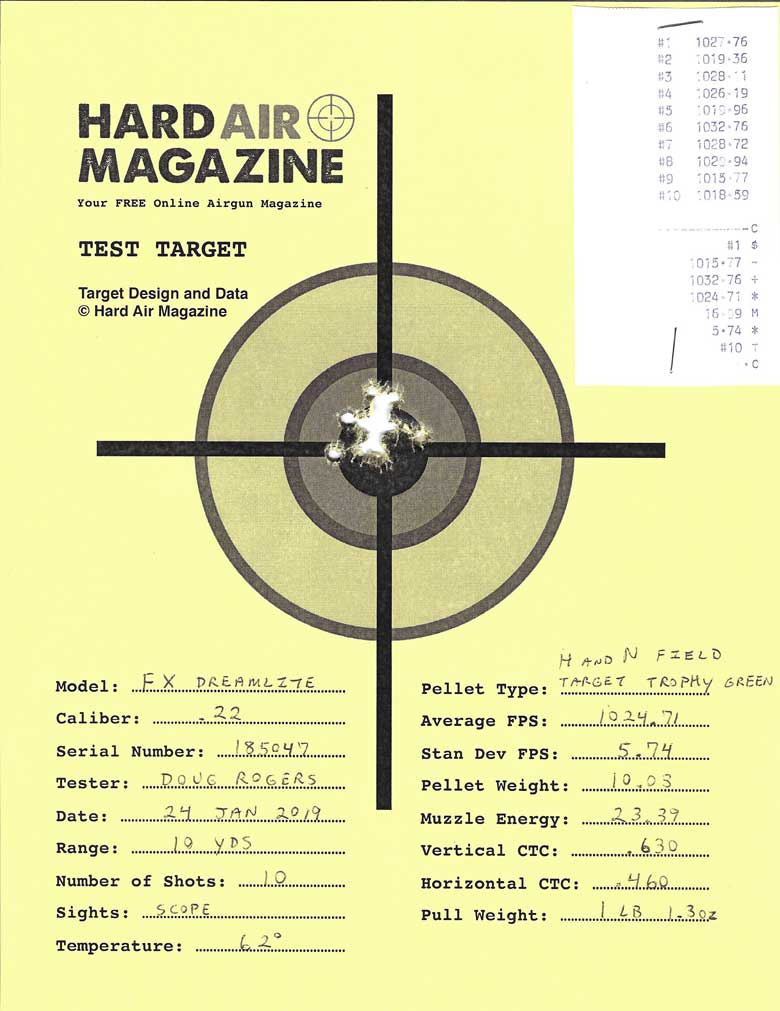 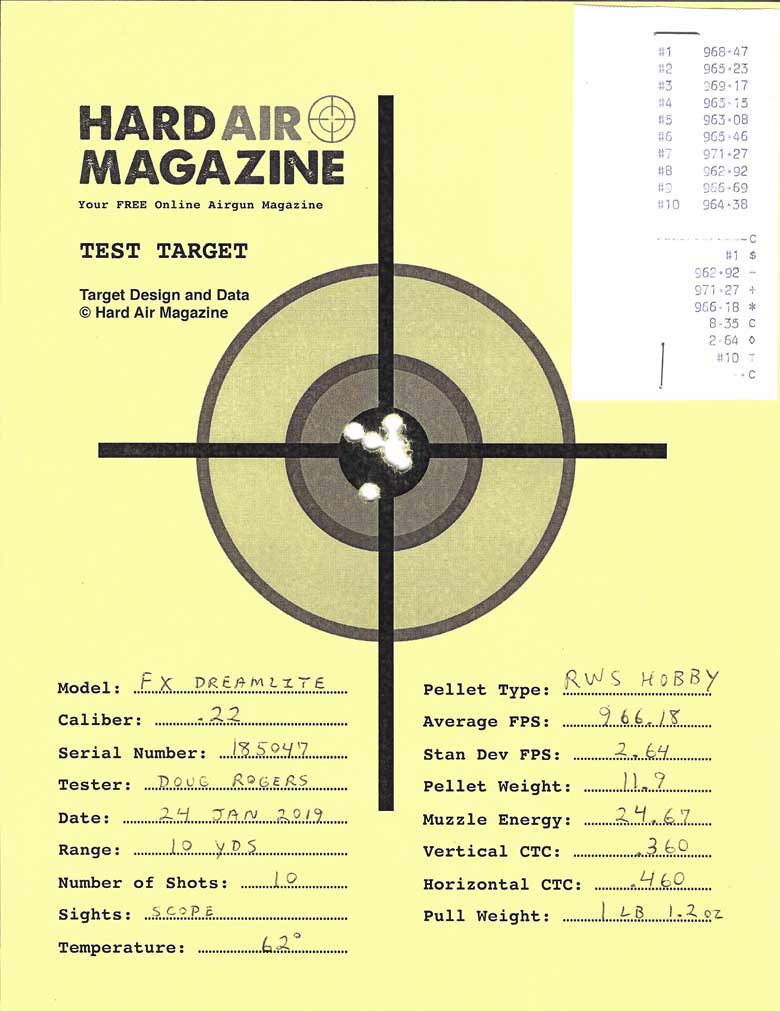 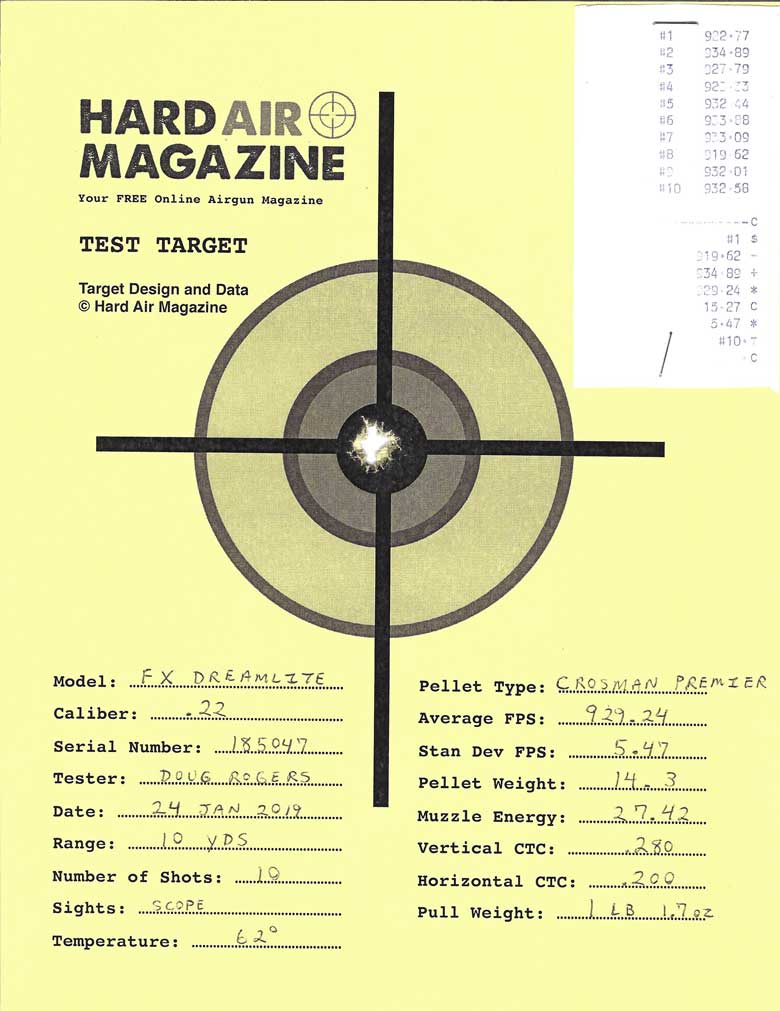 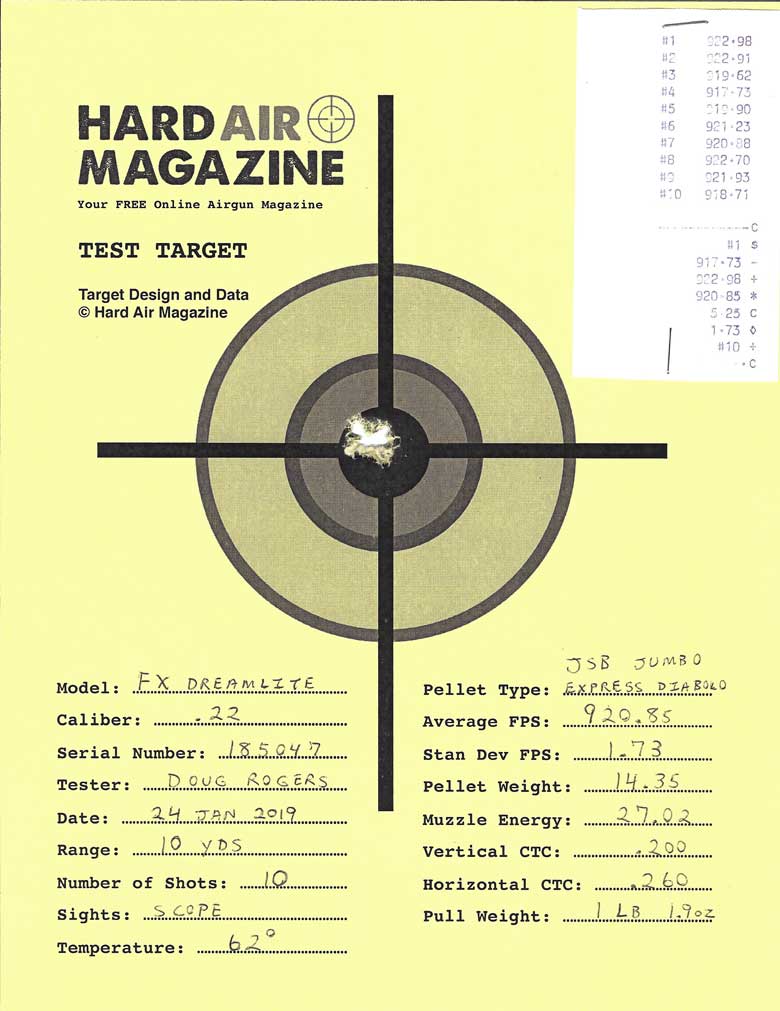 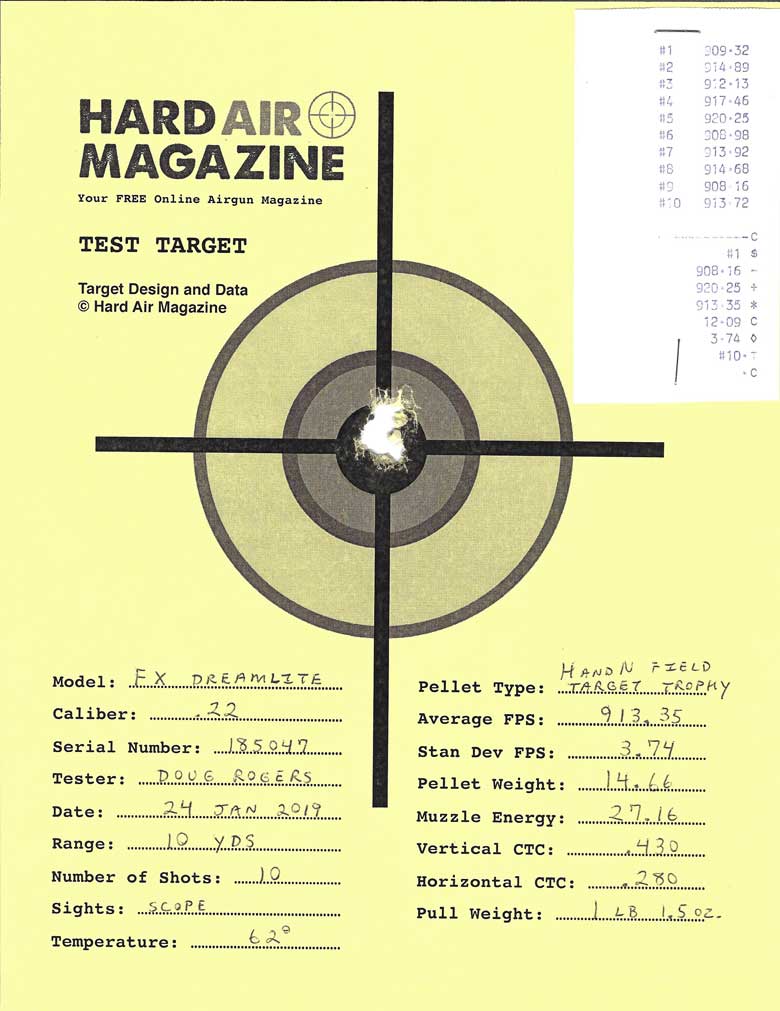 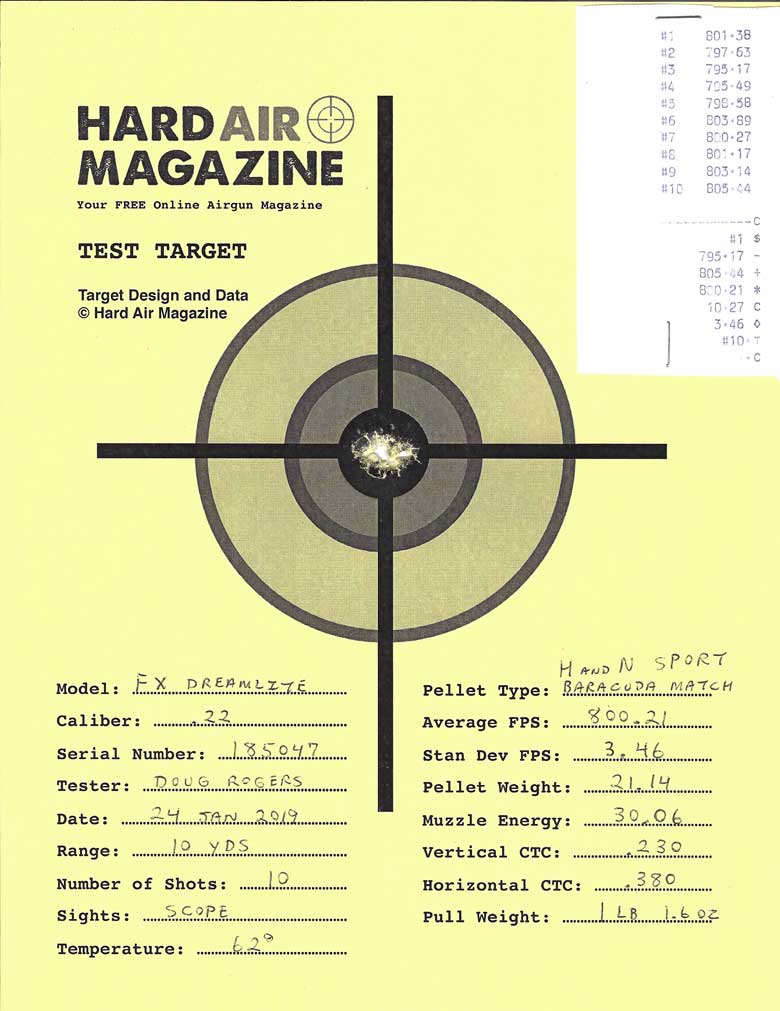 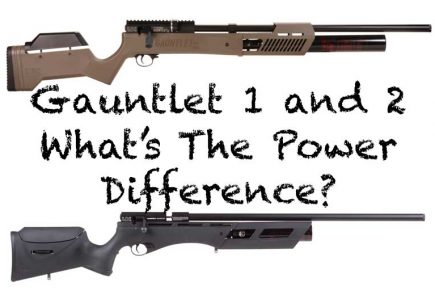 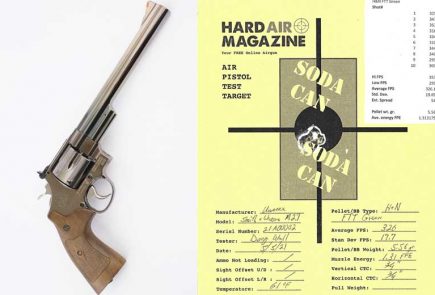 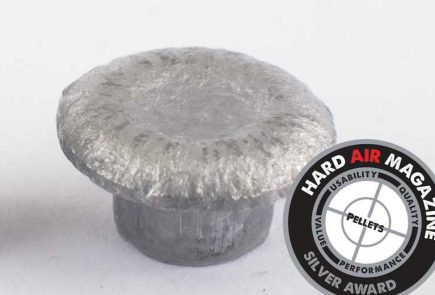