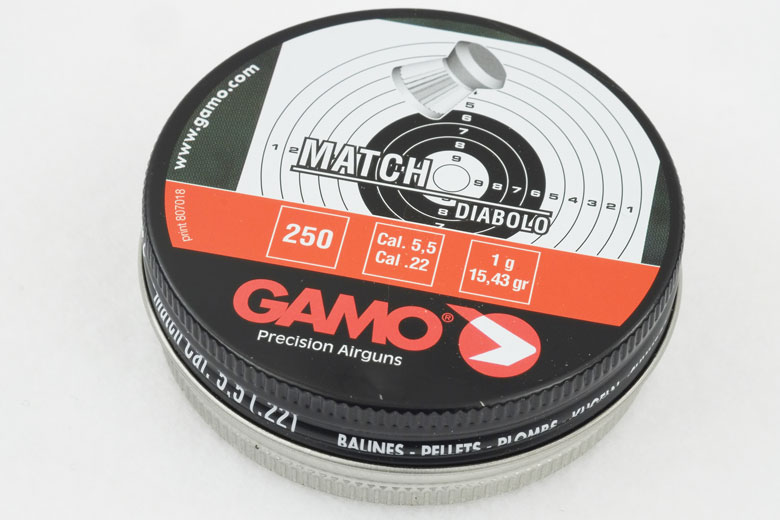 Let's be clear, Gamo Match 15.43 Grain .22 caliber pellets are sold at a bargain price. If you want cheap pellets, here they are! So HAM test expectations match that positioning.

High points are the excellent cleanliness of the pellets and the outstanding tin they are packed in.

Unfortunately, the manufacturing consistency of the Gamo Match 15.43 Grain .22 caliber pellets tested by HAM was low, even considering the price.

In spite of this, they may still have gained a HAM Award if the product marketing claims been not so far removed from reality.

HAM's not going to say that these pellets cannot shoot well in some airguns. However, the chances are low and the shot-to-shot consistency will probably be poor, as we found.

37%
HAM Rating
You have rated this
Full Review

Cheap is good, right? Well, in this case, unfortunately not, as we’ll discover in this comprehensive test review.

Gamo Match .22 caliber pellets are wadcutters with a flat head and fluted skirt, so they’re obviously intended for short-range use in plinking and target shooting. However, at a specified weight of 15.43 Grains, they are rather heavier than most other wadcutters of this caliber. 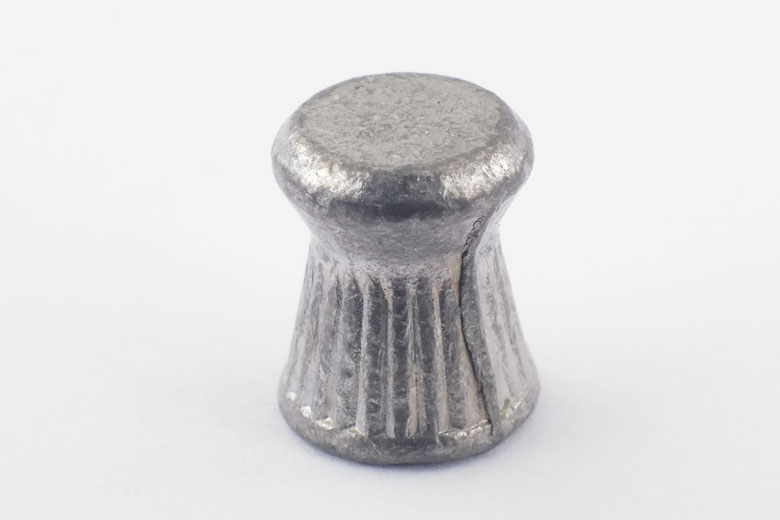 The manufacturer claims that there are 250 pellets in a tin of Gamo Match 15.43 Grain .22 caliber pellets. Unfortunately the tin tested by HAM fell waaaaaay short of this with just 203 pellets in the tin.

Of these 203 pellets, 4 were damaged and unusable. This means that there were just 199 usable pellets in the tin of Gamo Match 15.43 Grain .22 caliber pellets HAM tested. That’s 20% below the manufacturer’s claim.

As we can see from the rear of the retail packaging, Gamo claims that “consistency, uniformity and performance  are what makes GAMO ammunition superior to all others.” Unfortunately it’s not easy to see that claim is supported by the results of the HAM test data.

Also note that Gamo claims “extreme velocity and greater penetration” on the rear of the packaging. Unfortunately, there’s no way that any heavy lead wadcutter pellets will ever have “extreme velocity” compared to other types of airgun pellets.

And , although penetration in HAM’s standard soap block test was not bad compared to other pellets tested, it was about average for the Gamo Match 15.43 Grain .22 caliber pellets we tested, not greater. 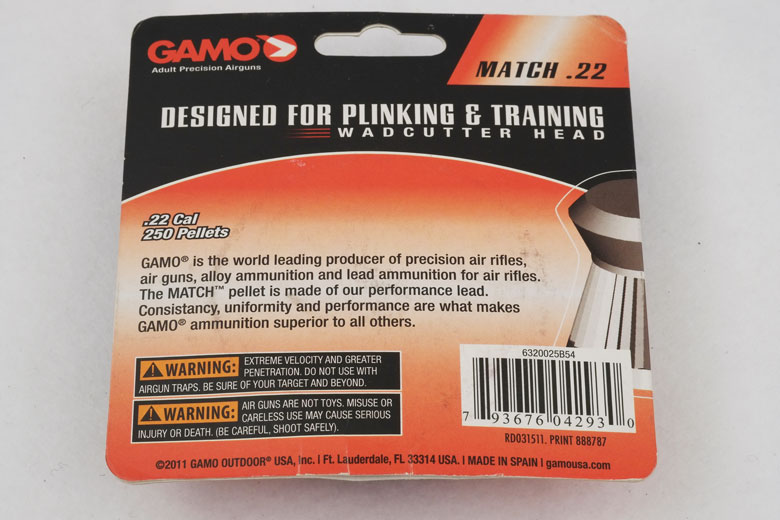 Moreover, the average – and most common head diameter was 5.57 mm. The maximum was 5.62 mm. This is far higher than the nominal 5.50 mm diameter of .22 caliber airgun barrels. In extreme cases, this could even result in some pellets failing to fit into the barrel! 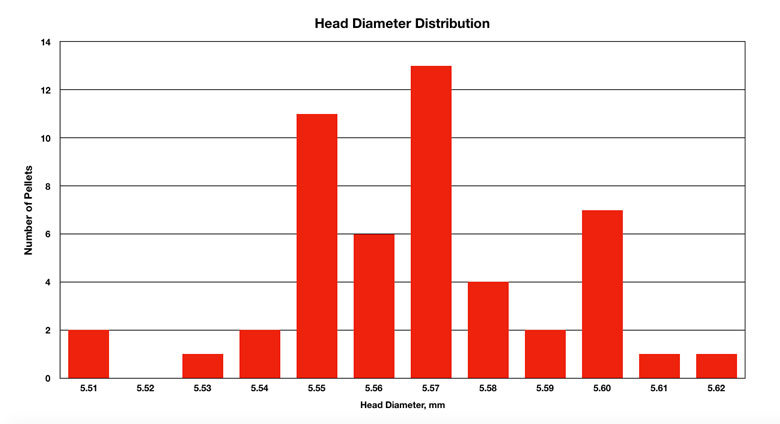 A similar level of manufacturing consistency also was seen in the weights of the Gamo Match 15.43 Grain .22 caliber pellets tested by HAM.

As we can see from the chart below, the difference between the lightest and heaviest pellets tested by HAM was 5.14% – from 14.97 Grains to 15.74 Grains. Again, this is a much wider spread than we normally see in HAM pellet testing. 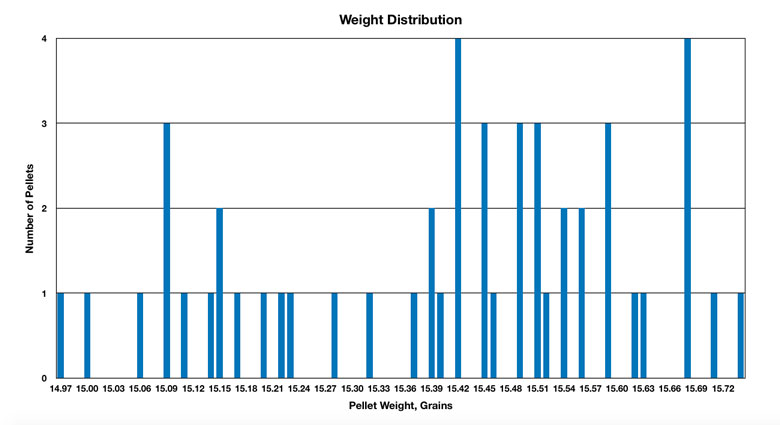 Relatively speaking, the length consistency for the Gamo Match 15.43 Grain .22 caliber pellets tested by HAM was rather better. 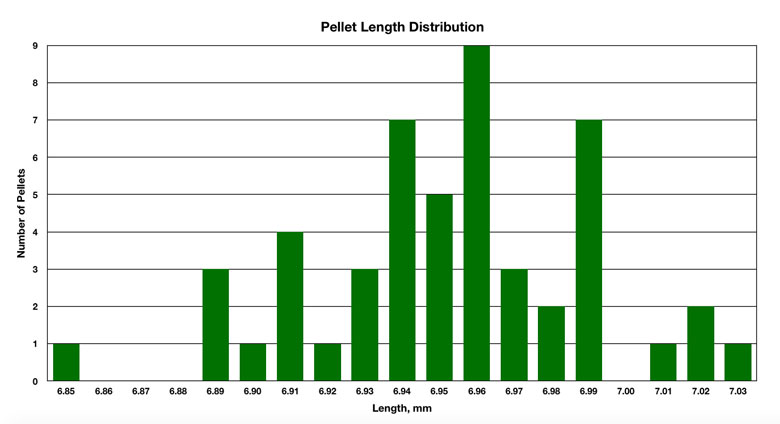 The variation in manufacturing consistency shown above was confirmed by the high Standard Deviation (variation between fastest and slowest pellets in a string) of 11.42 FPS found in HAM testing.

There’s always a certain amount of lead dirt and dust that makes it into the final tin of pellets.

However, the Gamo Match 15.43 Grain .22 caliber pellets tested by HAM were remarkably clean. There was just 0.028 Grains of dirt in the tin tested by HAM, as you can see below. That’s an excellent result. 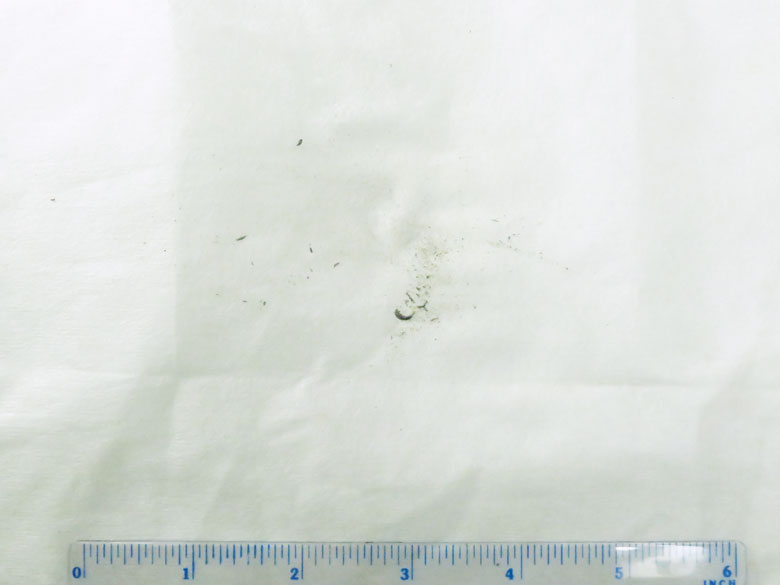 As rather heavy, wadcutter pellets with a Ballistic Coefficient of 0.017, Gamo Match 15.43 Grain .22 caliber pellets are not intended for long range use.

Using our standard Beeman 1074 test gun, Muzzle Velocity averaged 687.6 FPS, giving an average Muzzle Energy of 16.18 Ft/Lbs. The large Extreme Spread of 36 FPS between the fastest and slowest shots would be likely to make considerable differences in the point of impact at reasonable ranges, however.

Like most wadcutter pellets, the loss in energy is very rapid. No less than 30% of the Muzzle Energy has already been lost at just 26 Yards.

This is, of course, not a criticism of the Gamo Match pellets. It’s just the way things are… 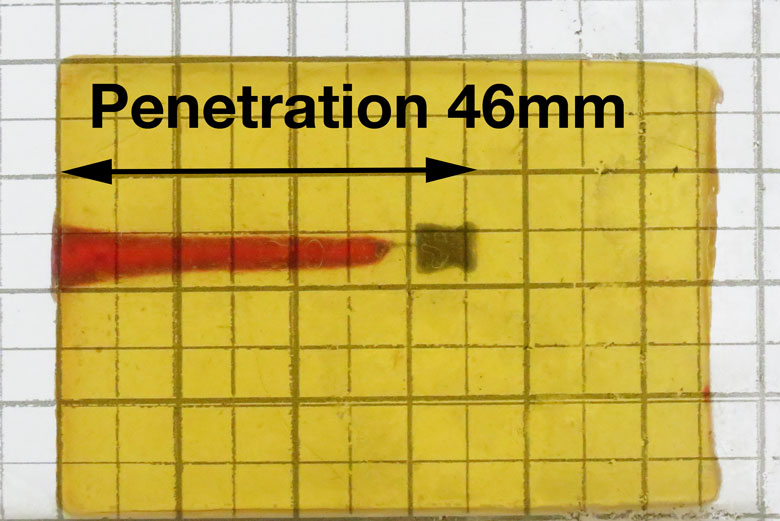 Penetration into HAM’s standard soap block was about average, but the pellet did not expand significantly. It measured 5.72 mm diameter after firing, compared to 5.57 mm before.

Often, wadcutter pellets can show considerable expansion, equating to a huge wound, but that is not the case here. The un-fired pellet can be seen on the right in the photograph below. 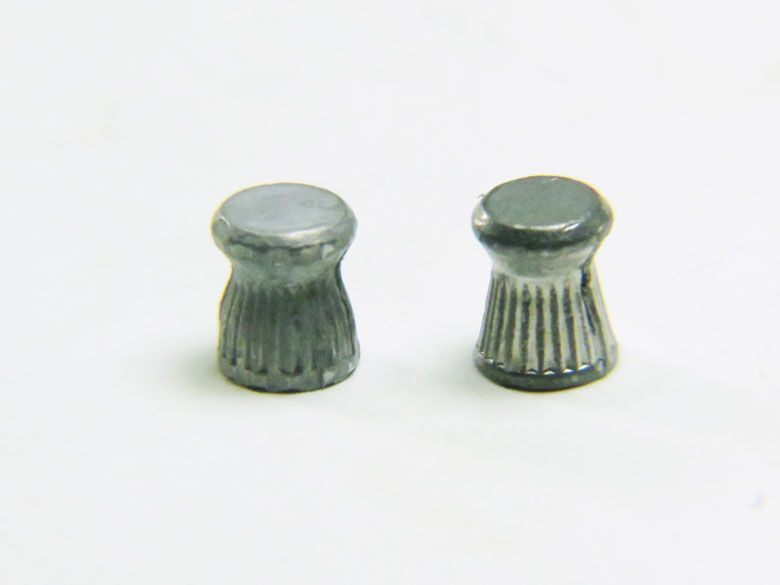 It’s a model for some other pellet manufacturers to aim for. It screws-on easily but is not too tight. It’s also very well marked with the name of the product inside. Just a sheet of foam to prevent pellet damage through movement in shipping would make it perfect. This is a great pellet tin at any price! 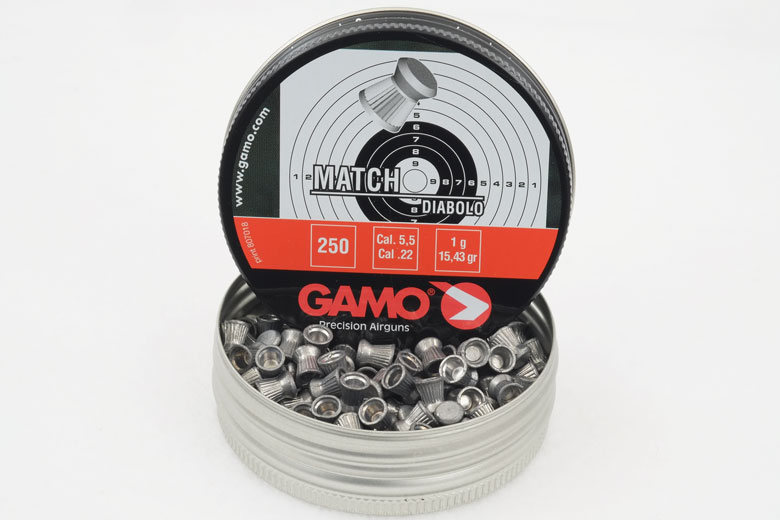 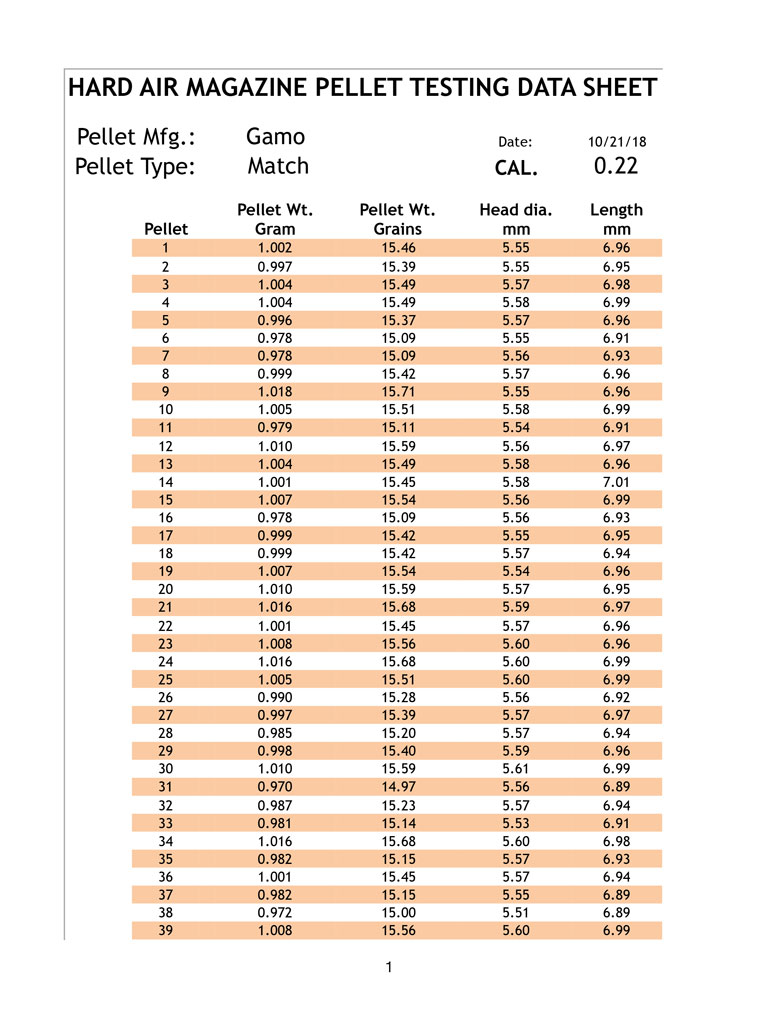 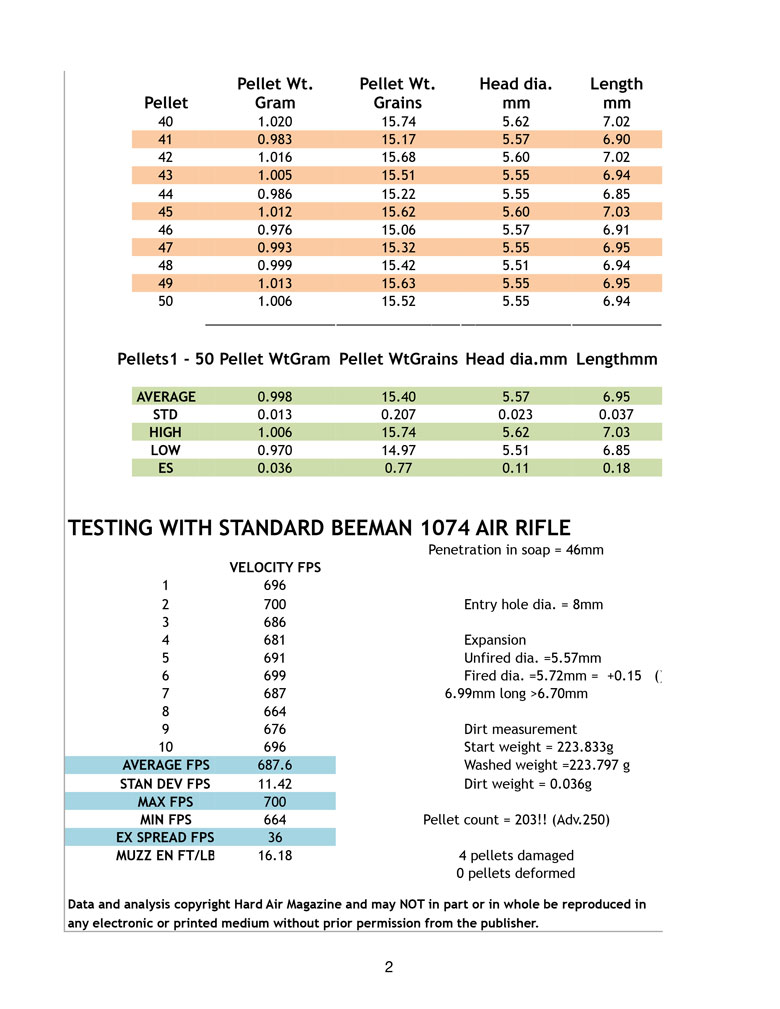