Gauntlet 2 Power – It’s A Big Increase from The Original! 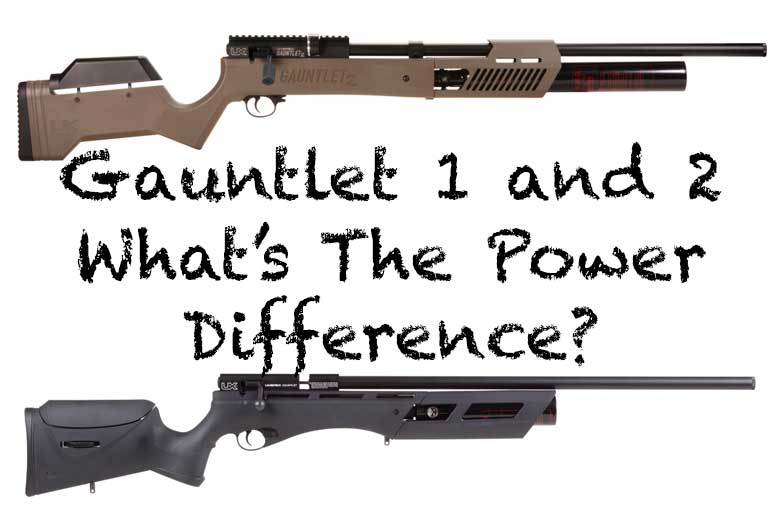 As HAM works through testing the new Umarex Gauntlet 2 air rifle, we thought you’d be interested in these initial findings. It’s clear that Gauntlet 2 power is much increased above that of the original model.

By how much and what does that do to the shot count? Let’s find out…

We’ll cut to the chase. Here’s what we found for the Gauntlet 2 in .22 caliber.

Note that these results relate to mid-weight – 13.43 Grain – pellets. The absolute Muzzle Energy numbers will be much higher with heavier pellets – as you will see in our forthcoming, comprehensive HAM test review. However today we’re mainly talking comparisons and we’d expect these to be fairly similar, irrespective of pellet weight used.

If we chart the Muzzle Energies produced by the two guns for each shot, the increase in Gauntlet 2 power shows very clearly! What does “calibrated” mean? We’ll explain that below… 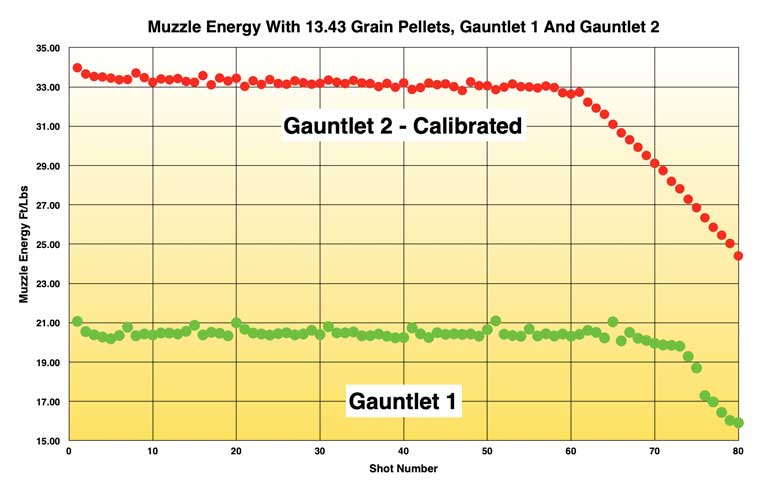 For this investigation, we used Gauntlet 1 data gathered in HAM’s original .22 caliber Gauntlet test review from 2017.

Here’s what we found.

Surprisingly, the Gauntlet 2 fired both pellets with effectively the same average Muzzle Velocity. (It surprised me, anyway). However the heavier pellets had 7% greater Muzzle Energy. So this meant that we were able to use the FPS numbers from both Gauntlet 1 and 2 tests “as is”, even though they were produced by different pellets.

For Muzzle Energy, we calculated the results for Gauntlet 2 based on the 14.35 Grain pellets and then reduced the numbers by 7%. That “calibrated” the Muzzle Energy and allowed us to make valid comparisons between the two models.

With both air rifles filled to the full capacity and pressure of their HPA bottles, we found the shot curves displayed in the charts below.

First, here’s the curve of FPS for the Gauntlet 2. 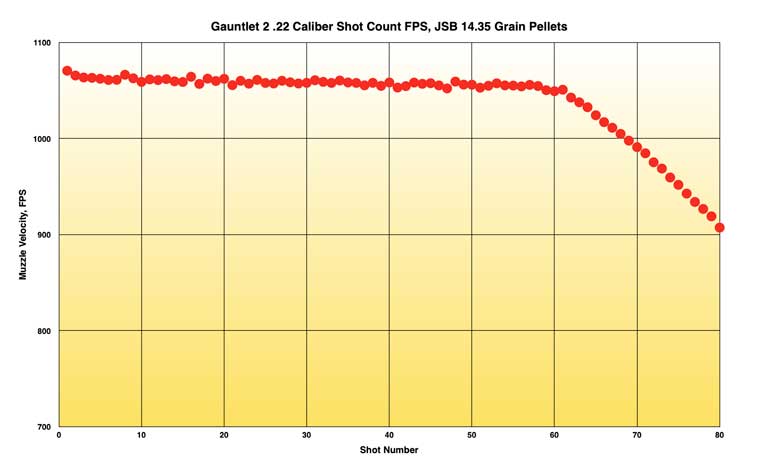 Then there’s the curve for the original Gauntlet 1. 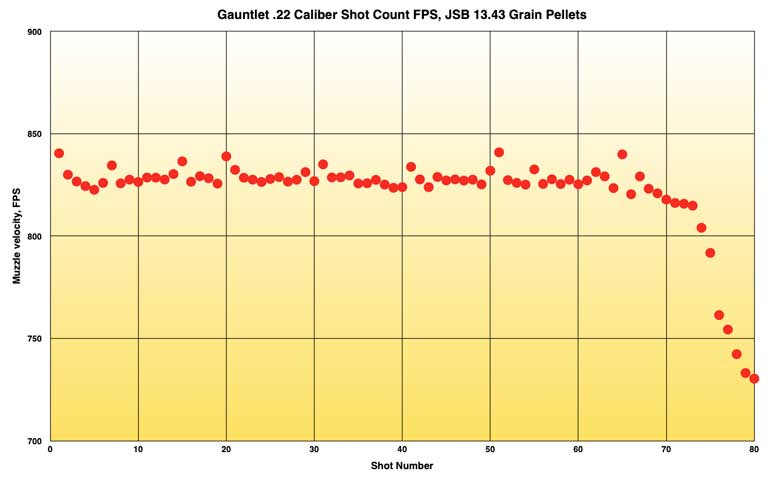 The comparison shows the MUCH higher FPS numbers produced by the Gauntlet 2. It also shows more shot-to-shot consistency. That’s probably a function of regulator performance, not pellet-to-pellet inconsistencies.

It also shows how the Gauntlet 2 “fell off the regulator” at shot 62. The original Gauntlet held on until shot 74.

For the purposes of our Muzzle Energy calculations, we took “Consistent” Muzzle Energy to be the average of the shots between the maximum FPS and that number less 40 FPS in each case.

So, taking the above FPS numbers, calculating the appropriate Muzzle Energies and applying our calibration factor, we see the power curve for the .22 caliber Gauntlet 2 below. 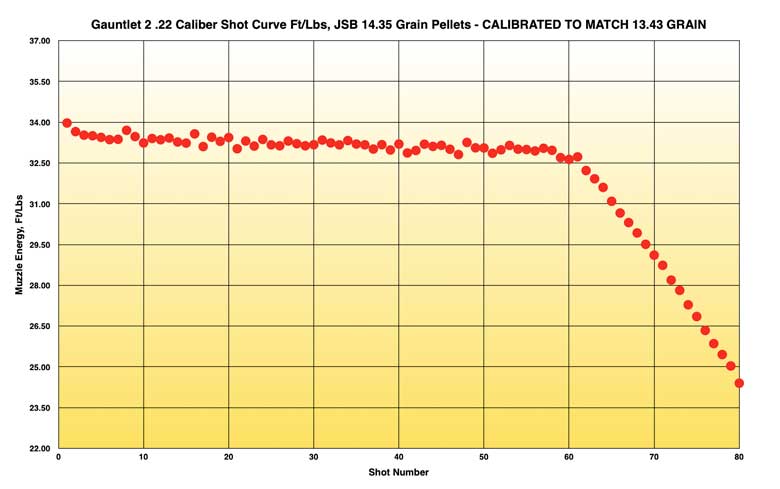 Here’s the comparable power curve for the Gauntlet 1. 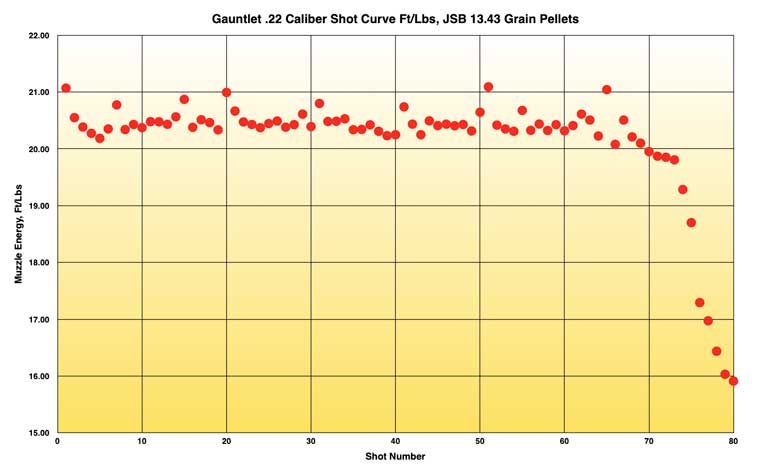 So what did Umarex designers do to provide such significant power increases for Gauntlet 2? They’re summarized in the table below.

It’s an interesting commentary on the capability of the basic Gauntlet platform that it has proved to be capable of such significant power increases while still retaining the same overall design as the original Gauntlet 1 model.