How Many Shots Can I Get From A Replica BB Pistol? 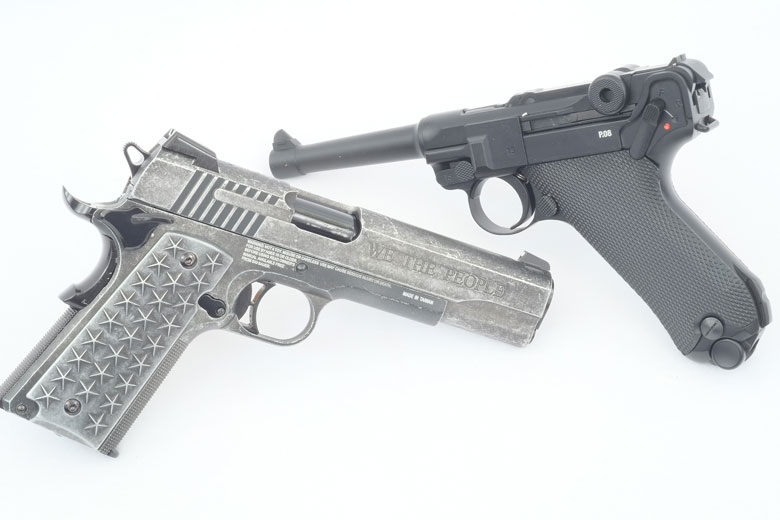 As replica BB pistols are one of the hottest parts of the airgun market, that makes these questions important. Let’s answer both of them here, as they’re very closely linked.

To do so, we’ll be using test data generated from Hard Air Magazine test reviews. These are conducted in a standardized, consistent manner. This means that the data is about as comparable as possible.

But there’s still a ton of variables, as we’ll explain…

Above, the SIG 1911 We The People and the Umarex Legends P08 are very different replica BB pistols. But both combine strong and realistic blowback with a low shot count.

Just about all replica BB pistols use the same power source. It’s a 12 Gram cartridge, often known as a Powerlet, from the Crosman trade name. 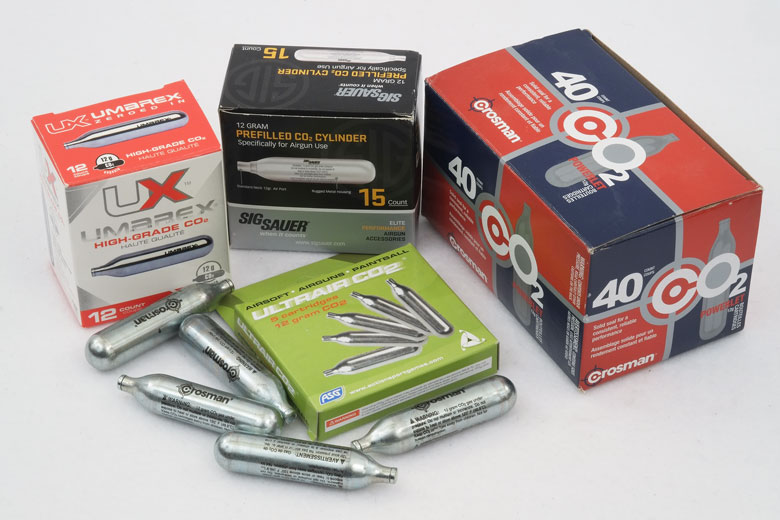 So you would naturally think that 12 Grams of CO2 are available for use when the replica BB pistol is loaded, right? Unfortunately no…

As every manufactured product is very slightly different, it’s guaranteed that the amount of CO2 inside a “12 Gram” cartridge will be different. Less gas inside any specific cartridge will give less shots, of course.

And then that cartridge has to be pierced in order for the gas to pressurize the gun itself. Almost always, there’s a hiss of gas when doing this. Of course, that means that CO2 is being lost – and it’s never exactly the same amount. More gas lost when piercing means less available to power shots from the replica BB pistol.

Basically, something a little less than 12 Grams of CO2 is likely to be available to power a replica BB pistol. And it’s almost certain to be a different amount every time the gun is loaded with CO2.

Another variable is the type of action used in the pistol. Is it a blowback action or not? If it is a blowback, how fierce is the blowback?

How heavy is the slide and how far back does it move?

All the energy to fire our replica BB pistol comes from that one 12 Gram CO2 cartridge. We naturally think that this energy is used to propel the BBs. But where there’s a blowback action, it doesn’t just happen, it is also powered by the CO2 cartridge!

Immediately we can understand that blowback replica BB pistols are likely to have a lower shot count and/or a lower Muzzle Velocity than non-blowback guns.

Below, the new Glock 19 is a non-blowback replica BB pistol with a high shot count. 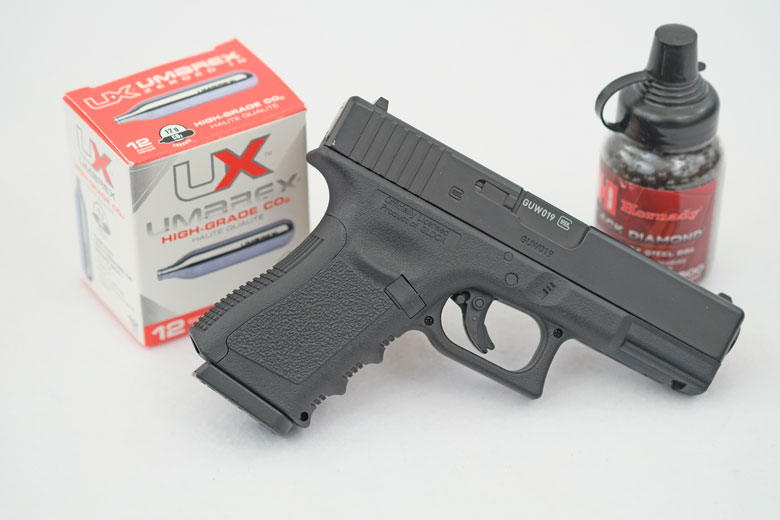 Then there’s a couple of other factors that effect the number of shots and FPS available from any CO2-powered airgun, including replica BB pistols. These are barrel length, rate of fire and ambient temperature.

Then the CO2 inside the cartridge does not give a constant pressure. It varies with the external (ambient) temperature. This is a simple fact of physics.

Higher temperatures lead to more pressure which leads to higher FPS and possibly more shots. Lower temperatures give less. This is why no FPS claims for any CO2-powered airgun have any validity if the operating temperature is not also specified!

As CO2 is a refrigerant gas, the faster a CO2-powered gun is fired, the lower the CO2 temperature becomes. Lower pressure means less “oomph” per shot, and so lower FPS. Fire any replica BB pistol on full auto – if it has such a capability – and you’ll see the FPS drop like a stone. Likewise the number of shots.

But Surely We Can Know Typical Numbers?

Yes we can and that’s where the HAM test data comes in.

By analyzing the results of multiple tests conducted under conditions that are as similar as possible, we can find some typical numbers for shot count and FPS for replica BB pistols.

The replica BB pistol that best combines blowback with high shot count and FPS in HAM testing is the Beretta Mod84FS from Umarex. 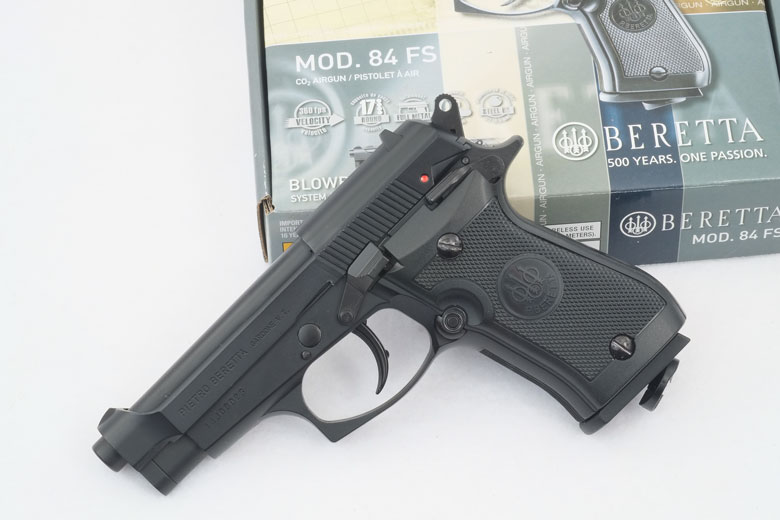 The blowback replica BB pistols tested by HAM give an average of 66 shots at 325 FPS at 65 degrees F.

So that realistic blowback action feel costs you an average of 17 shots and 41 FPS compared to non-blowback guns.

Let’s look at more detail below…

The blowback replica BB pistols tested by HAM give an average of 66 shots at 325 FPS at 65 degrees F. The basic data is shown in this table. (You can sort for highest shot count or FPS using the arrows in the top row).

Translated into visual form, we see the data as points on this chart. We can see big differences in shot count and FPS, largely driven by the weight of the slide and the length of travel of the blowback. 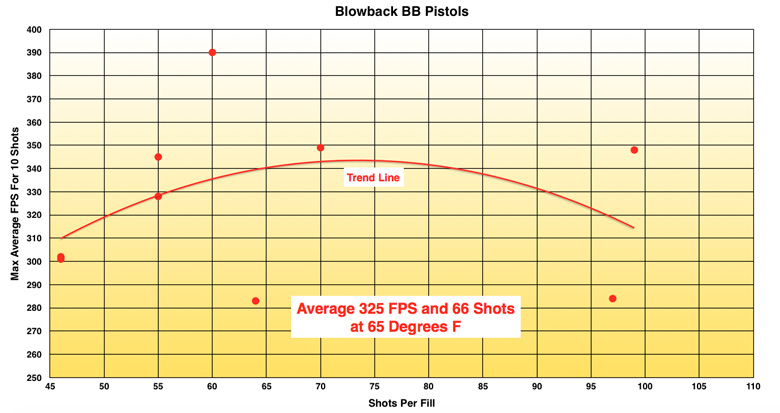 The replica BB pistols giving the most perceived blowback effect are the Colt Commander, the SIG 1911 We The People and the Legends P08. As you can see, they pay the price in shot count and FPS. No surprise there!

Here we have the data and chart for non-blowback replica BB pistols. 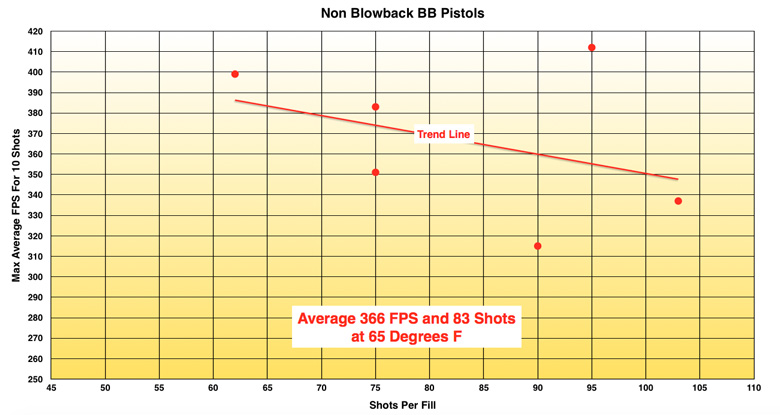 The trend line here shows – as you would expect – that, generally, guns with higher shot counts produce lower FPS. Those with lower shot counts have higher FPS.

What’s that gun that manages to combine a great shot count with high FPS? It’s the new Glock 19 from Umarex. We’ve tested it but not yet published the comprehensive HAM review.

Is That Really All?

Well, actually, no. It is possible to obtain many more shots per fill, combined with high FPS if you are prepared to do without extreme realism in a BB pistol.

Giving away realistic appearance and trigger characteristics can allow for great improvements in both number of shots and FPS. Just look at this chart below. It’s the same data as the non-blowback chart above, but with one other gun added. 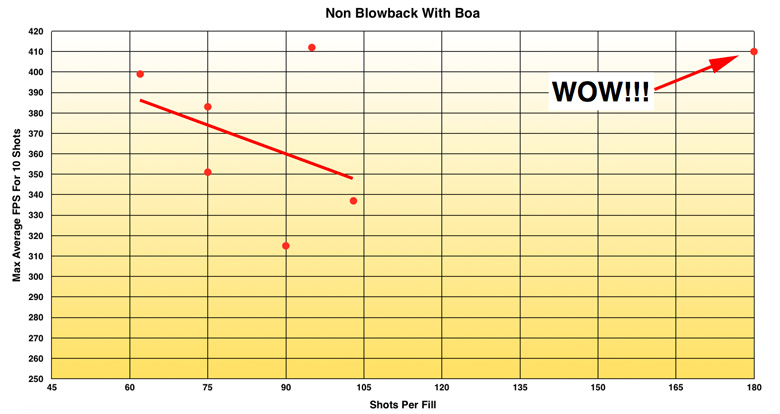 However it’s not a realistic replica in the way that all the other BB pistols tested are. It’s a generic 9mm auto “lookalike”.

This lack of realism allowed the designers to use a completely different type of action. One that’s much more efficient – and obviously cheaper, too.

The Boa’s trigger pull is very, very heavy. Field stripping? Don’t even think of it!

Also the actual barrel of the gun protrudes from the front of the gun as part of the shooting cycle, as we can see from the photograph below. 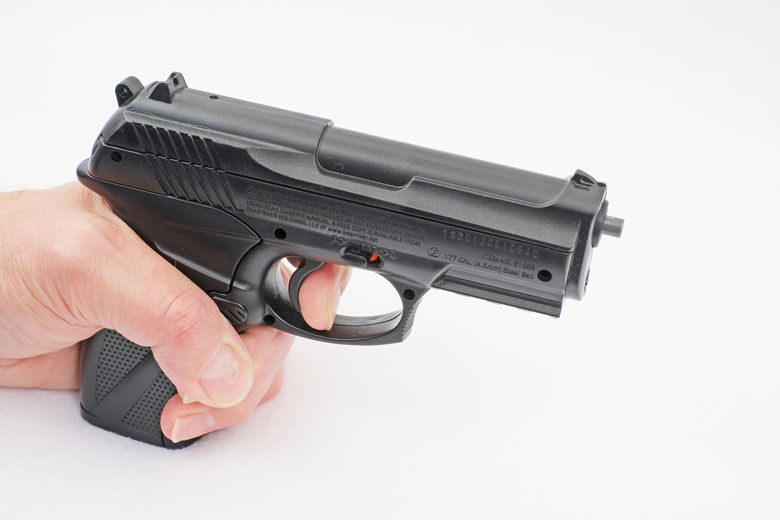 Of course, all of these things would be unacceptable for most replica BB pistol buyers looking for realism.

Compared to the Boa, the average non-blowback replica BB pistol costs you 97 shots per fill and 44 FPS maximum velocity for that level of realism.

Add-in blowback and you’ll see that extreme realism in a replica BB pistol is purchased at the cost of 114 shots and 85 FPS.

So now we know the cost of extreme realism in a replica BB pistol every time you load a 12 Gram CO2 cartridge. We have plenty of choices, but – as always – we can’t have everything all at once!

Below. The Glock 19 and the Boa are both non-blowback BB pistols. One’s an incredibly-accurate replica. the other’s not. 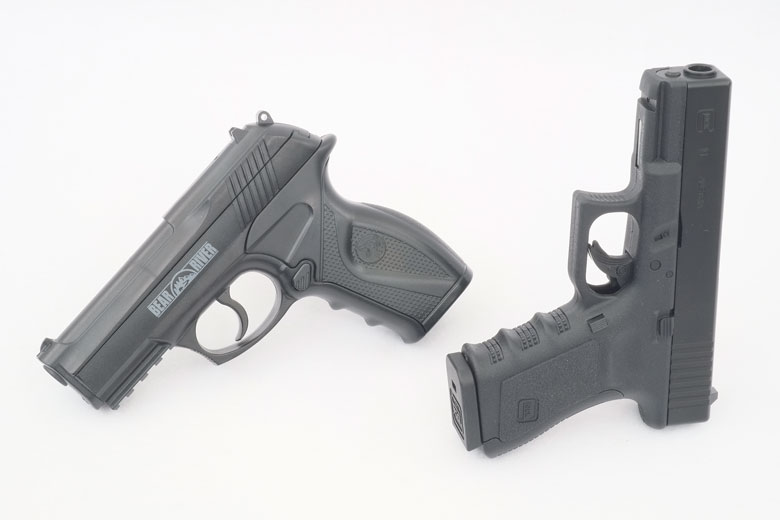 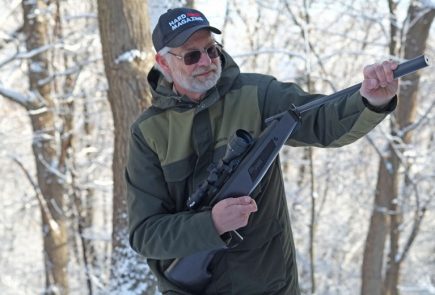 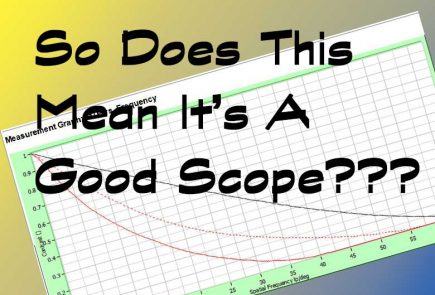 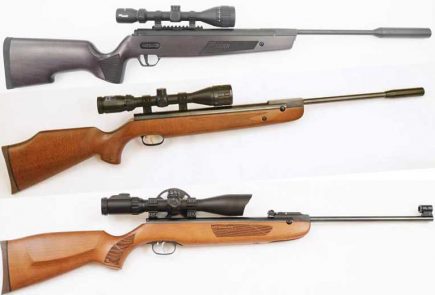 Steve, What’s The Best Break Barrel Air Rifle For Me?