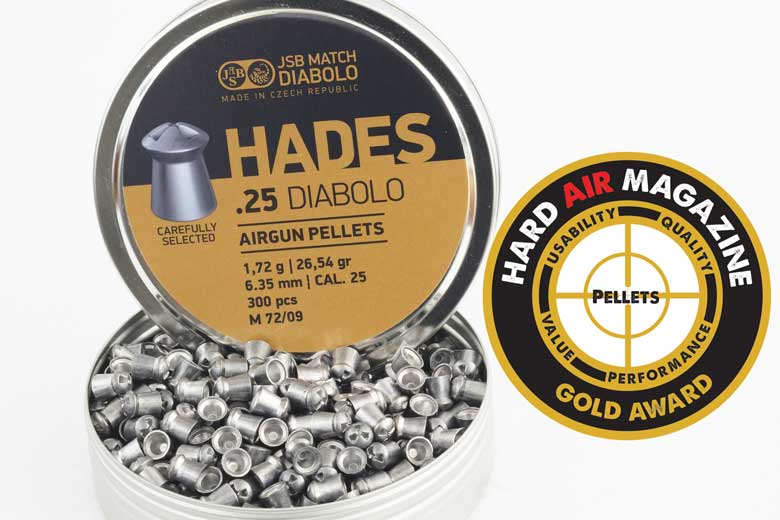 Dirtier than usual for JSB pellets
Fairly expensive
Really nothing else!

They combine consistent, high quality manufacturing with devastating expansion upon impact. Although not tested in this review, they also have an excellent reputation for accuracy.

Hades pellets are an easy HAM Gold Award winner. If you're an airgun hunter shooting .25 caliber, you definitely need to try them out!

74%
HAM Rating
You have rated this
Full Review

JSB Hades 26.54 Grain .25 caliber pellets are dedicated for hunting use. The domed head has three very deep indentations molded into it. In a way, it’s a type of hollow point design. However you describe the design, Hades pellets mushroom on impact in a devastating fashion!

Hades pellets are now available in .177 caliber, .22 cal and .25 – as tested here. The dead design is the same – in principal – for all calibers, although the body is different for each caliber. 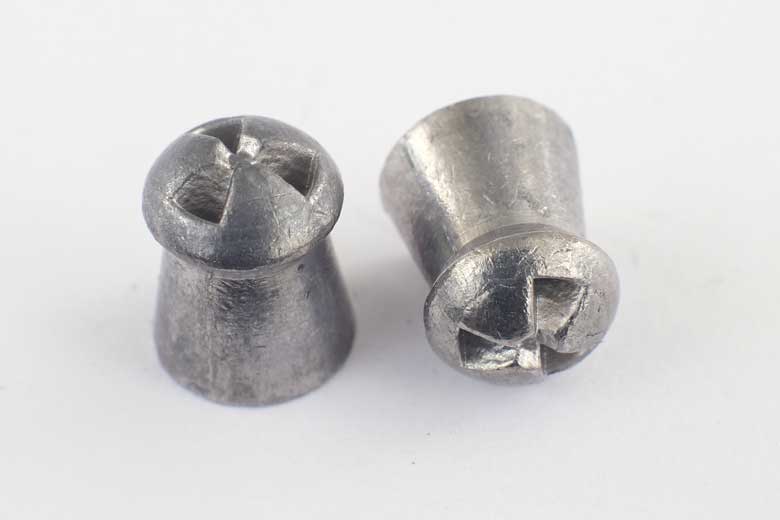 At 66.6 cents each when packed in a 300-count tin, Hades 26.54 Grain .25 caliber pellets are among the more expensive in this caliber. However most all airgun hunters will consider them to be money well spent.

JSB Hades pellets are billed as being the ultimate “one piece” airgun pellet for hunting. HAM agrees. Given their huge expansion on impact, it’s clear that they will have a devastating effect on the appropriate prey.

The average weight of the JSB Hades 26.54 Grain .25 caliber pellets tested by HAM was 26.54 Grains. This is exactly as claimed on the tin!

The tin tested by HAM contained 299 pellets, rather than the 300 as marked. This is very unusual for JSB pellets! There are usually the correct number or a few more in all the other tins we have tested.

Consistent head diameter is one of the key dimensions for accurate pellets.

This is well above average among the pellets tested to date by HAM. 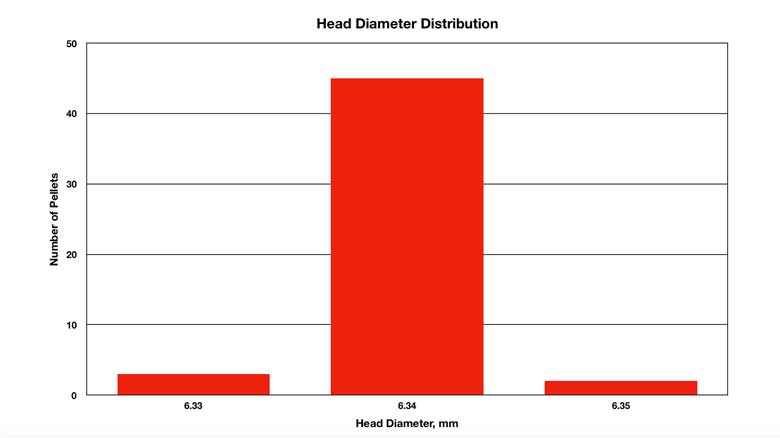 As is usually the case, variability of weight was somewhat more ragged, although the sample pellets we measured actually produced an “average plus” grade. To put the graph below in perspective, the difference in weight between the lightest and heaviest pellets was just 2.01%.

The average weight of the pellets tested by HAM exactly matched the weight specified on the tin. That’s a surprisingly rare occurrence! 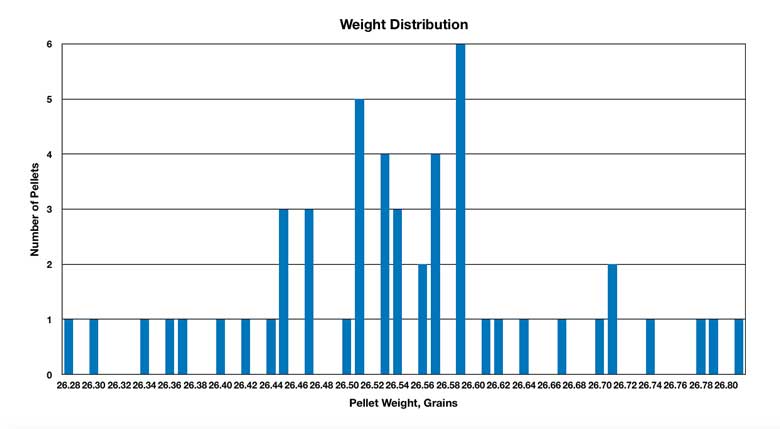 The average length of the JSB Hades 26.54 Grain .25 caliber pellets tested by HAM was 8.19 mm. The most common pellet length was 8.20 mm. Twenty percent of the pellets were this long. This is about average consistency.

The difference between shortest and longest pellet measured was just 1.48%. This is rather better than average for manufacturing consistency. 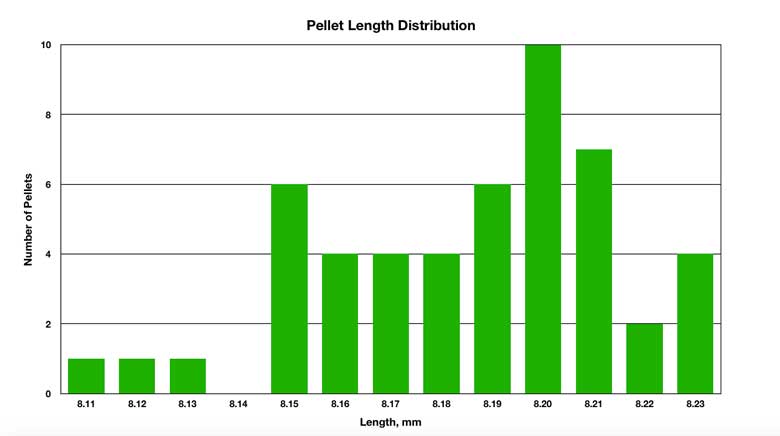 As mentioned above, the JSB Hades 26.54 Grain .25 caliber pellets tested by HAM were rather dirty compared to other pellets we’ve tested from the same manufacturer. However, the 0.56 Grains of lead dirt, dust and other fragments found per 100 pellets is actually around average compared to the other results found in HAM pellet test reviews.

The photograph below shows the result of carefully washing the pellets according to HAM’s standard test protocol. 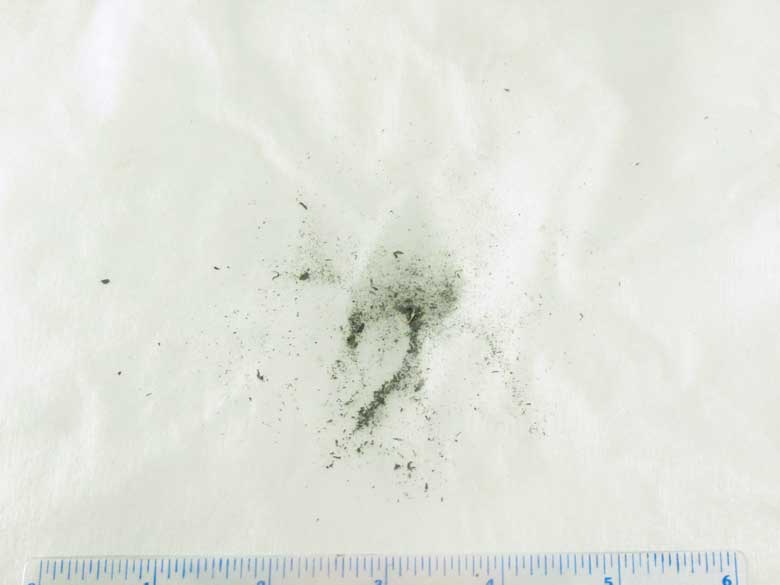 JSB Hades pellets demonstrated a Ballistic Coefficient of 0.026 in HAM’s standardized testing. This is not particularly high for .25 caliber pellets, although the bluff, shallow dome design with those deep indentations makes the result unsurprising.

A relatively low BC is also found with other popular, high-expansion hunting pellets such as Predator Polymags, for example

As we can see from the Chairgun graph above, 30% of the Muzzle Energy has already been lost at 33 Yards downrange. Moving out to 50 Yards sees the loss of another 10%.

However, most airgun hunting is undertaken at somewhere between 20 and 50 Yards range . This means that the outstanding expansion capabilities of Hades pellets will more than compensate for any loss of energy with range for most hunters.

In HAM testing, we found a deep penetration of 80 mm into our standard “ballistic” soap. However, this was due to it being fired by a powerful FX Impact air rifle. We expected strong penetration due to the power of that gun.

Yip, that’s it on the left! It’s difficult to imagine much greater expansion from an airgun pellet. This is, of course, exactly what is required to achieve a successful, humane, one shot kill when hunting. 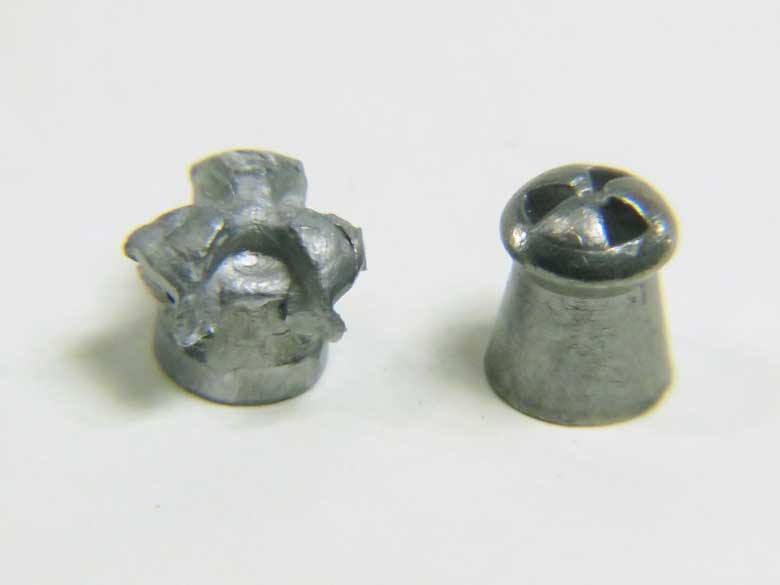 Foam disks are included at the top and bottom of the tin. This undoubtedly helps protect the contents from damage in transit. Every pellet in the tin tested by HAM was in perfect shape. 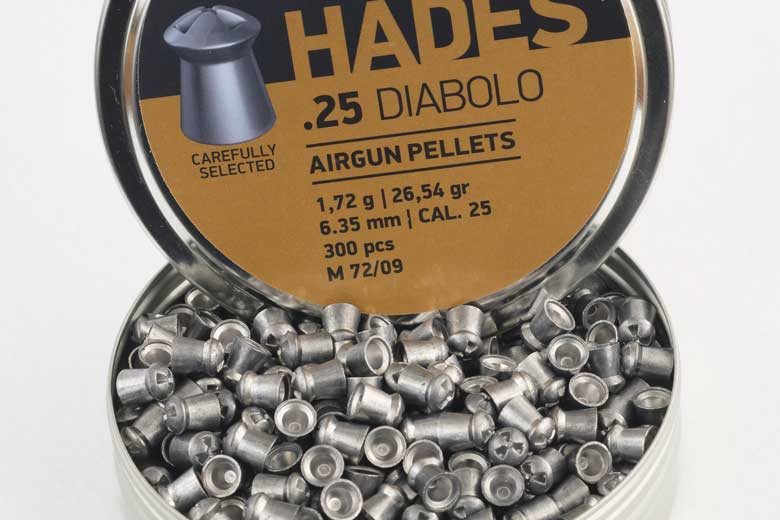 Although the tin of Hades pellets tested by HAM had the old-style “push fit” lid, JSB is rolling-out screw top lids across their range. So customers in future can likely expect to find their pellets arriving in screw-top tins, thus eliminating one of the very few complaints HAM has ever had about JSB products. 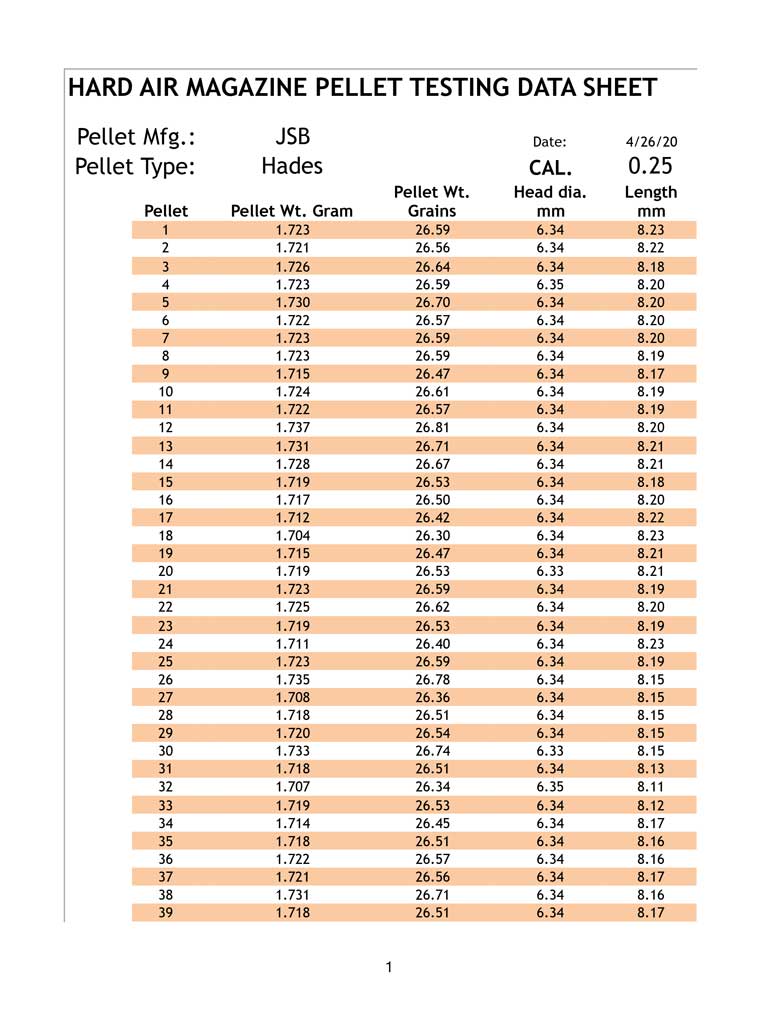 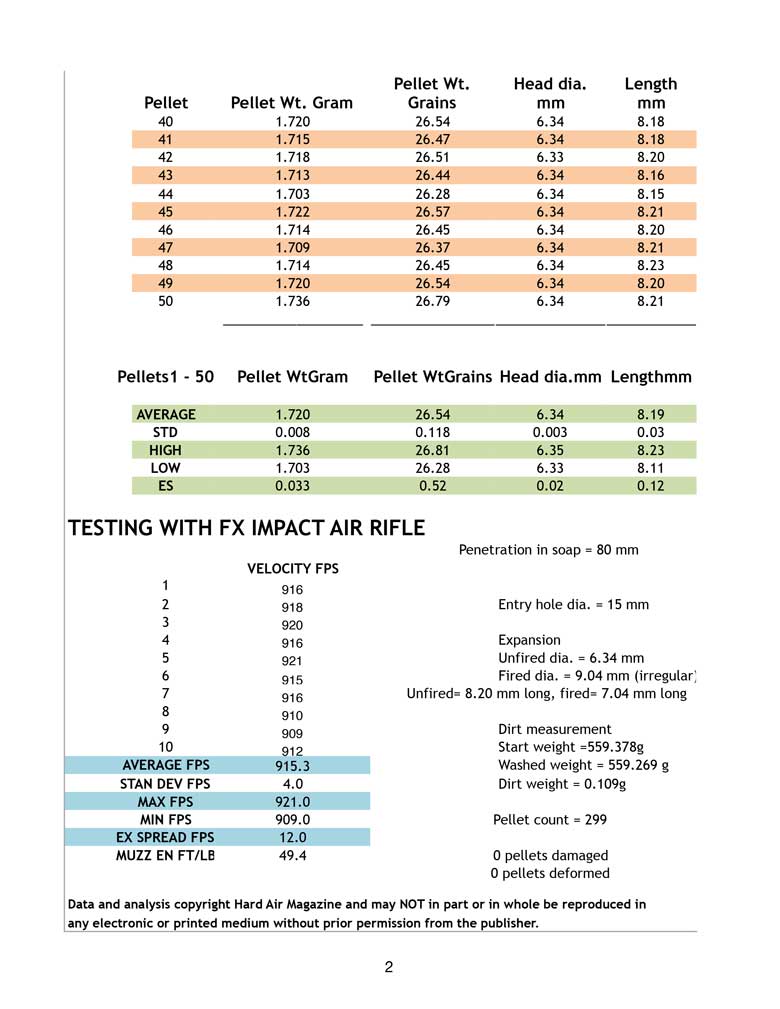 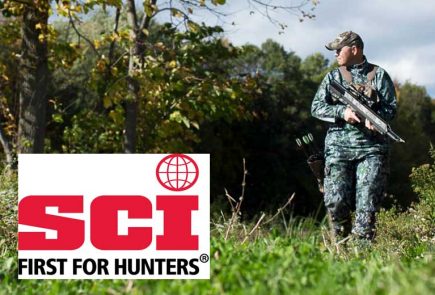 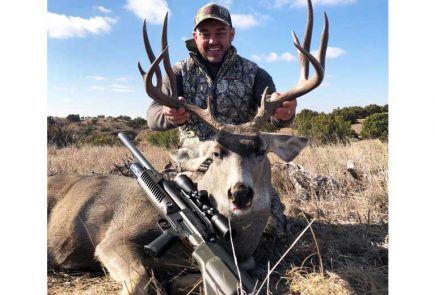