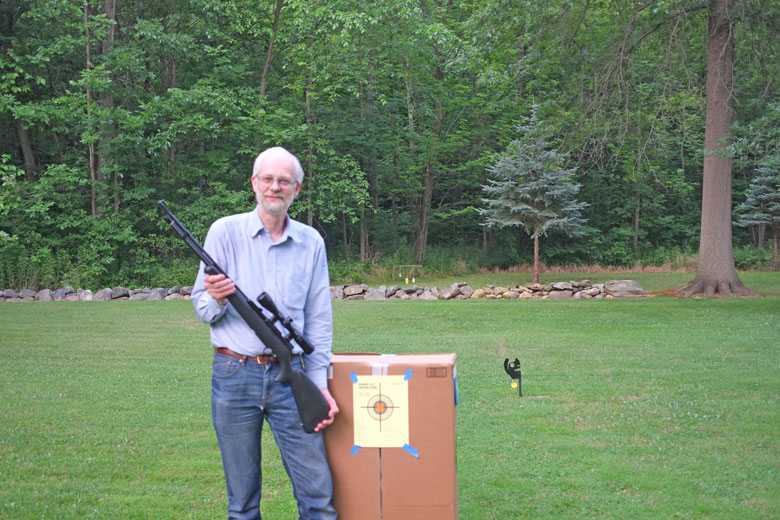 We couldn’t resist trying it! Here’s the HAM test results from shooting the Benjamin Maximus at long range.

We set up some targets at 30, 40 and 50 yards on HAM tester Paul Manktelow’s beautiful home range in Up-State New York.

The Benjamin Maximus was zeroed at 30 yards. I shot from a rest – actually a rolled towel on a shooting bench. So, the gun was rested, but not held solidly in a vice.

We chose to make this test shooting the Benjamin Maximus at long range using 14.25 Grain JSB Jumbo Express pellets. This gun is .22 caliber.

The JSB pellets were unsorted, taken straight from the tin.

Weather conditions were calm but hot and humid. We were shooting in the evening, after 7:30PM, so light was steadily falling… 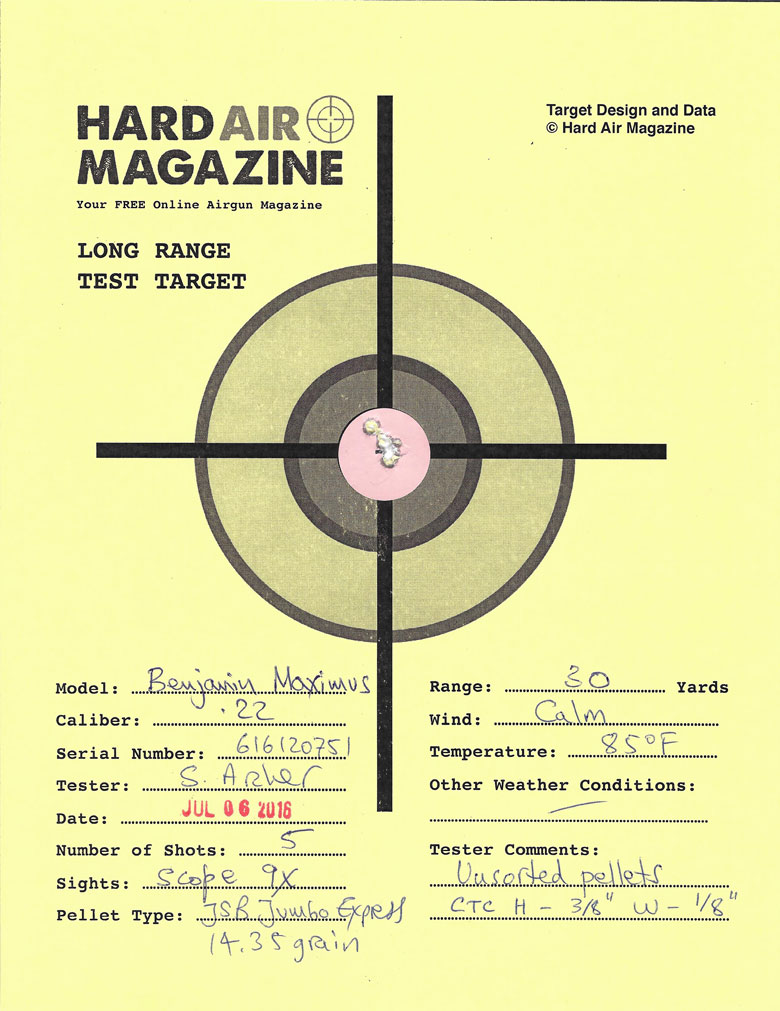 Next, we moved out to 40 yards. Same thing: 5 shots. No attempt was made to re-zero the scope for the different range, so the point of impact was a little lower, as expected.

This time the group opened-out to 3/8-inch x 3/8-inch CTC. Again very good. As you can see from the targets, the point of impact moved down and to the left. The scope was still sighted-in for 30 yards. 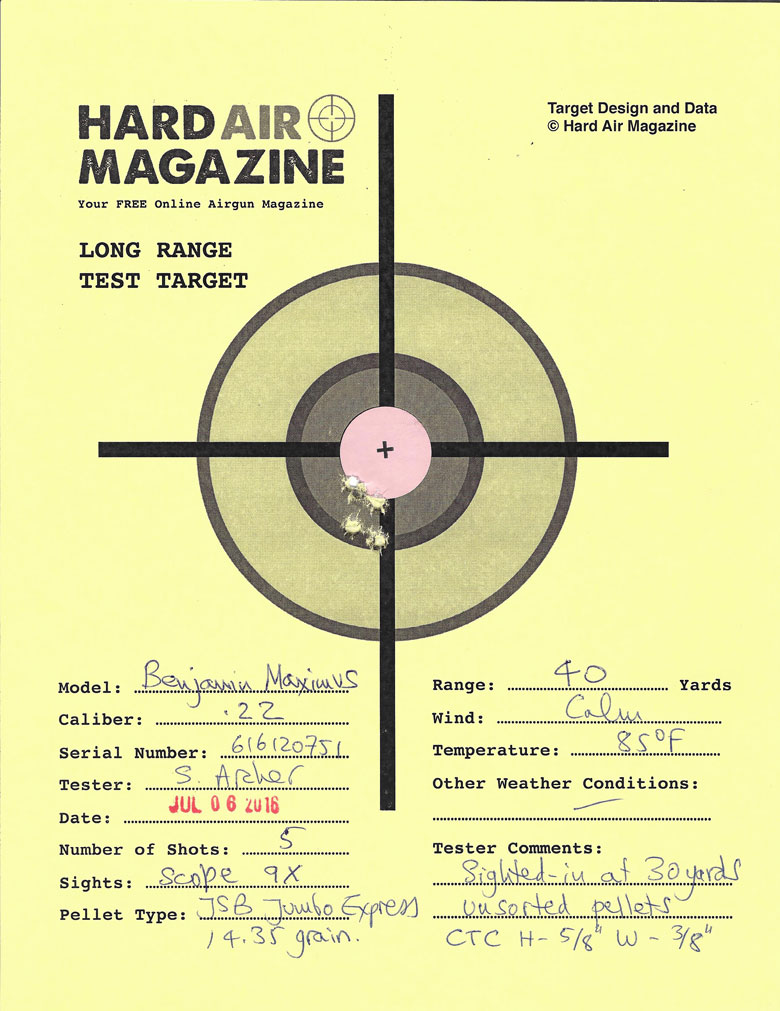 Then we moved back to 50 yards. Same technique. This time the group opened out a little further, as we expected. The 5-shot group measured 7/8-Inch x 1/2-Inch. We were very happy with this result! 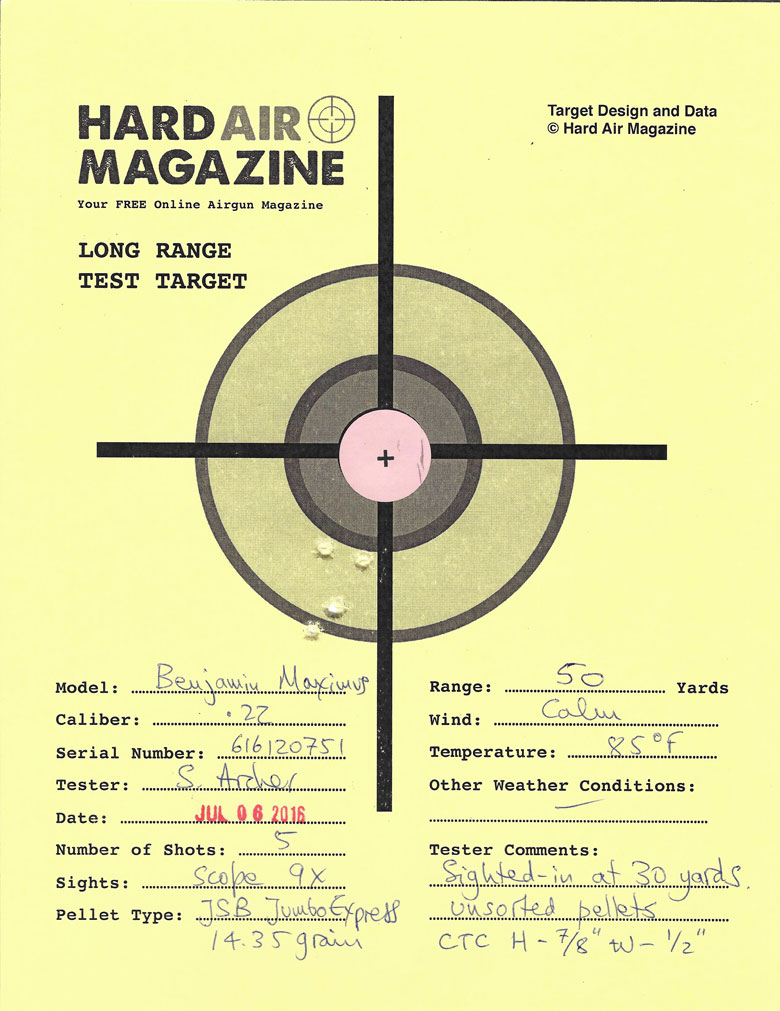 If you look behind the target in our heading photograph, you’ll see Paul’s reactive target system with three hanging targets far back behind the 50-yard target. This is actually at 67 yards. 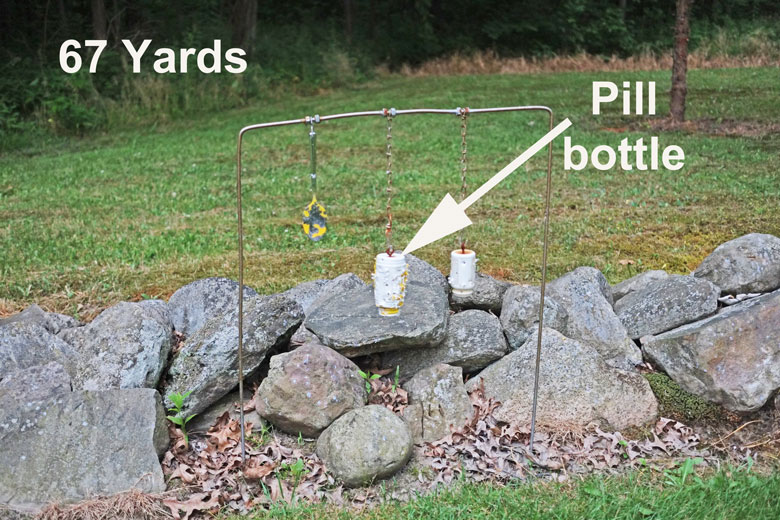 So, I fired 8 shots at Paul’s hanging pill bottle target. Amazingly, I hit 6 out of 8 shots on that 3-inches x 1-inch target at 67 yards.

Six out of eight hits at 67 yards shooting the Benjamin Maximus at long range and only a 9x scope? I’m impressed. And remember this is the first sub- $200 PCP and I’m not an Olympic champion shot! If the trigger pull weight had been less than 6+ Lbs, I’m sure the accuracy would have been even better…