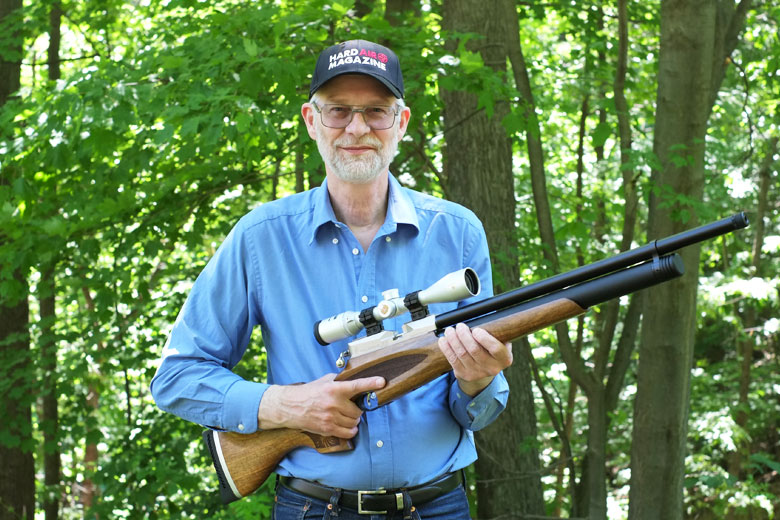 The Daystate Wolverine 303 is a well-known, British-made PCP air rifle. The Wolverine is available in a number of configurations and is calibers from .177 right up to .303 cal.

In .303 caliber, the Wolverine is definitely into Big Bore territory. So what is Big Bore? Generally, it’s taken to be air rifles with a caliber greater than .25-Inch.

The larger caliber Big Bore airguns actually shoot lead bullets rather than pellets. In fact, they can be the same rounds as are used in blackpowder guns of the same caliber. There’s no wasp-waisted diablo shape with these large caliber Big Bore rounds. 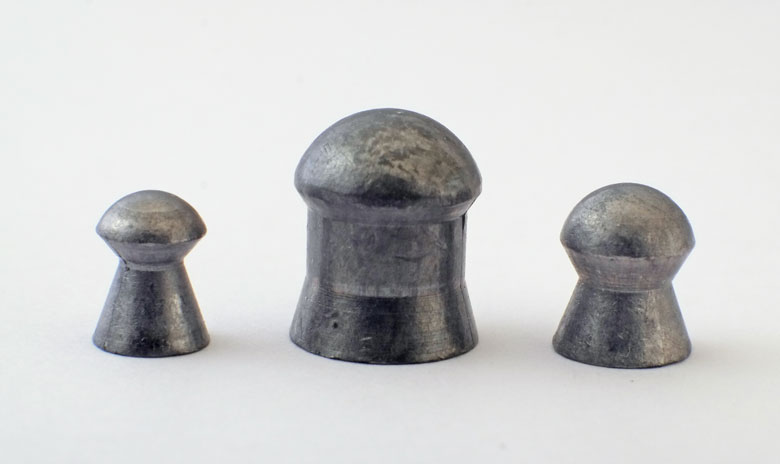 One example is the Air Force Texan. Introduced in 2015, has a claimed maximum Muzzle Energy of 500 Ft/Lbs. This is greater by far than the normal Muzzle Energy of a .22 Long Rifle firearm (typically around 120 Ft/Lbs) and even greater than some loads for the .45 ACP centrefire pistol (around 420 Ft/Lbs), which is noted for it’s knockdown power.

Of course there are downsides to these hugely-powerful Big Bore airguns. They are mostly very long, heavy and have a simply enormous appetite for air. Two shots per fill are not uncommon with the most powerful Big Bore air rifles. This means that they are often shot from a bench rest with the support of a large HPA tank tethered to the gun.

Oh yes, and you really, really, really need to have your own compressor as well if you plan to do much shooting at all with these bad boys!

An example of a gun in this Big Bore “sweet spot” is the Daystate Wolverine 303. Here we have what is recognizably an air rifle as we all understand it, together with beautiful build quality, considerable Muzzle Energy and a reasonable number of shots per fill. 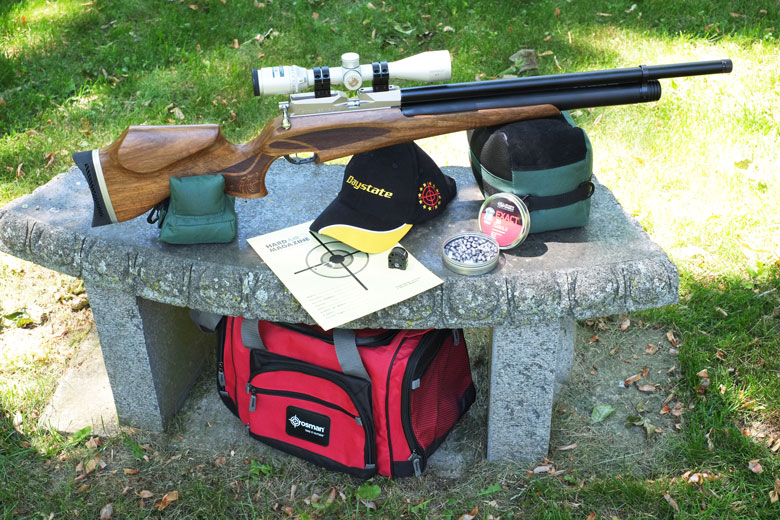 HAM contributor Pete Shooter is a rabid Daystate fan and just happens to have a Daystate Wolverine 303. So one day back in the Summer, we picked up a tin of 30 caliber, 50.05 Grain JSB Exact Diabolo pellets, filled up an HPA tank using an Omega Supercharger compressor (we both have one) and sat down to shoot!

Pete’s Daystate Wolverine 303 pushes out these 50.05 Grain pellets at Muzzle Velocity of around 920 FPS. That’s around 93 Ft/Lbs. This is combined with a very acceptable 20 shots before re-charging with air is required.

I measured the distance to the target using a SIG SAUER digital rangefinder. 55 Yards was the reading: right on the nose!

Then I set up a Labradar unit. Labradar looks something like a bright orange digital theodolite. It mounts on a tripod and is positioned close to the muzzle. Labradar measures pellet – or bullet, for that matter – velocity using doppler radar. So, it’s like a police radar gun. 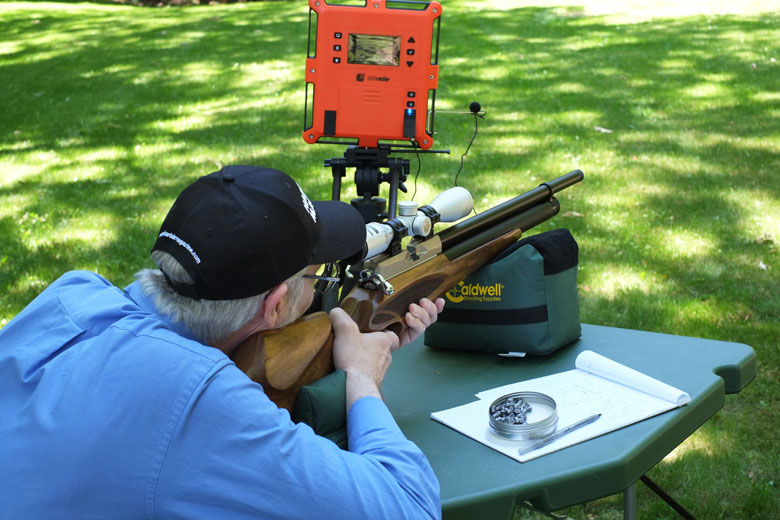 Labradar is different from a traditional chronograph because it does not use the passage of the pellet across two electro-optical sensors to measure its velocity. Instead, it measures the velocity by radar waves which are reflected back from the projectile. This means that – unlike a chronograph – Labradar can measure the velocity of a pellet at multiple points downrange, not just at the muzzle.

We fired a string of 5 shots from the Daystate Wolverine 303. These gave an average muzzle velocity of 916.8 FPS. That’s 93.62 Ft/Lbs of Muzzle Energy.

Below, this graph shows how velocity falls with distance when shooting the 303. 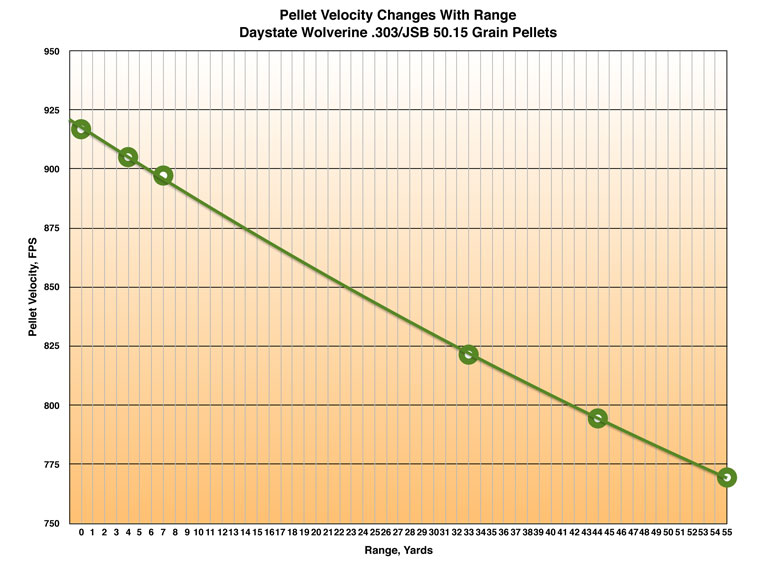 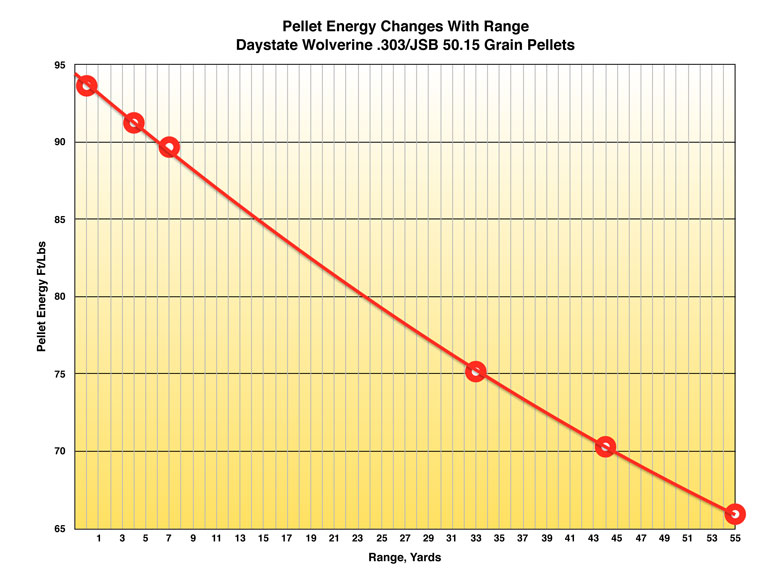 That’s what Big Bore power from the Daystate Wolverine 303 brings you. Nearly 66 Ft/Lbs of energy, even 55 Yards downrange at the target. And yet this is combined with a decent shot count of 20 shots per fill.

The Daystate Wolverine 303 shoots with authority and a fair amount of recoil. Although shrouded, it’s not that quiet. It feels and behaves like the high power air rifle that it is.

Both Pete and I were “rusty” at shooting – for different reasons – but even so, the Wolverine gave very satisfactory accuracy results downrange. Four out of five of Pete’s shots grouped into a single hole at 55 Yards. Except for the last, that is. Why does that always happen on the last shot when you’re shooting so well? 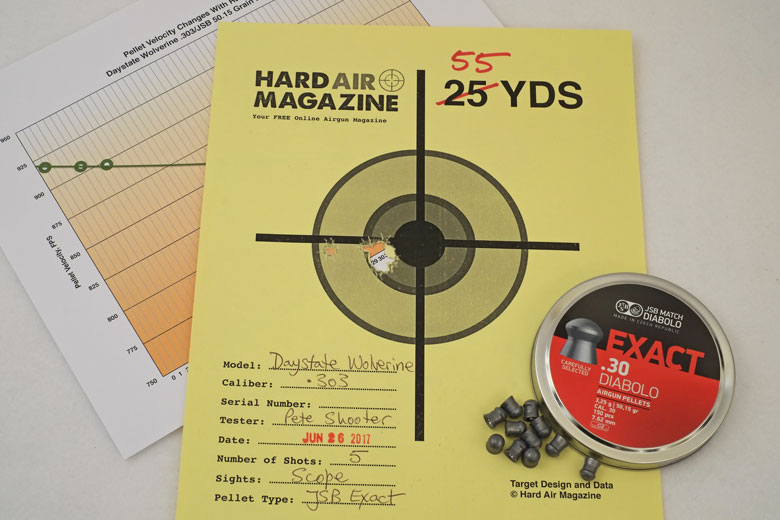