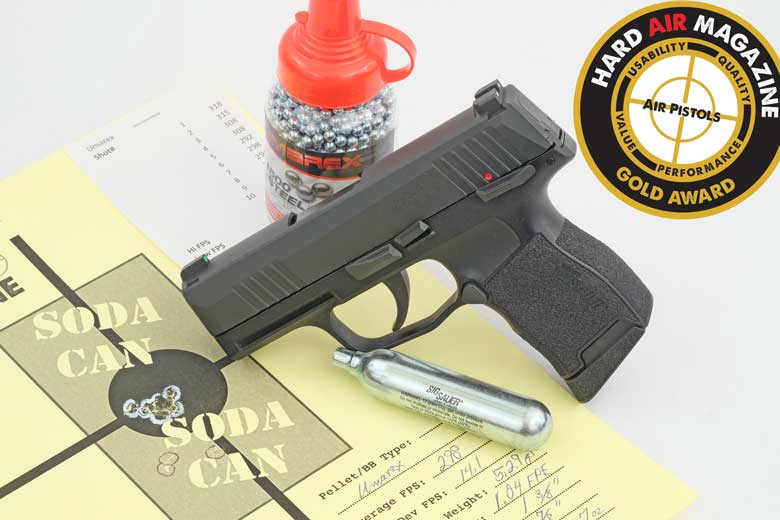 This will make an excellent training tool for owners of the P365 firearm. It's also a fun close-range plinker. And no, the price is not a mis-print, it really does sell for less than $80!

The P365 is an easy HAM Gold Award winner. The HAM Team loved it and we're sure you will too.

The P365 firearm retails at around $500. The P365 BB pistol sells at a Street Price of $79.95. That’s about one sixth of the price of the identical-looking firearm.

Given the realism, performance and quality finish of this blowback BB pistol, the question has to be “How can they do this for less than $80?”

Overall, replica BB pistols are of amazingly high quality and offer great value for money. The P365 BB pistol is outstanding even in this company. It offers all the functionality BB pistoleeros want except for firearms-like field strip capability.

Given the size, performance and price, we’re happy to give SIG Air a pass on field stripping. The P365 BB pistol is clearly great value! 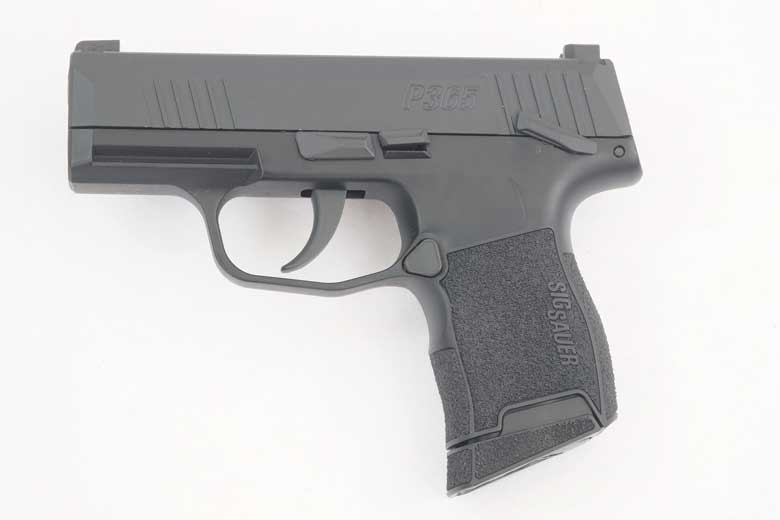 The P365 BB pistol looks like the firearms version. It feels like the centerfire model too. Overall size and weight are very similar. So are operational controls.

Here we have a very close replica of the P365 concealed-carry firearm. In fact, the term “replica” is almost incorrect. As both the firearm and BB gun are produced by the same company, it’s probably better to regard the P365 BB pistol as a version of the 9mm P365, rather than as a replica. 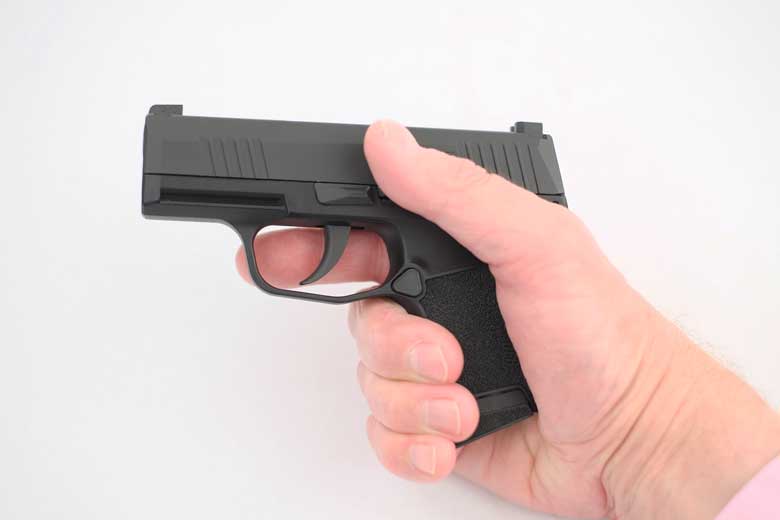 First impressions are that the P365 is almost impossibly small. What’s even more remarkable is that it has a functioning drop-free magazine.

This magazine contains the BBs and their loading system. It also incorporates the firing valve and the 12 Gram CO2 cartridge. This has to be the smallest drop-free magazine we’ve yet seen.

As can be seen from the photograph below, the complete magazine is very little larger than the CO2 cartridge. As making mechanical things small is always difficult, this means that some remarkable design engineering has been involved in the production of the P365 BB pistol! 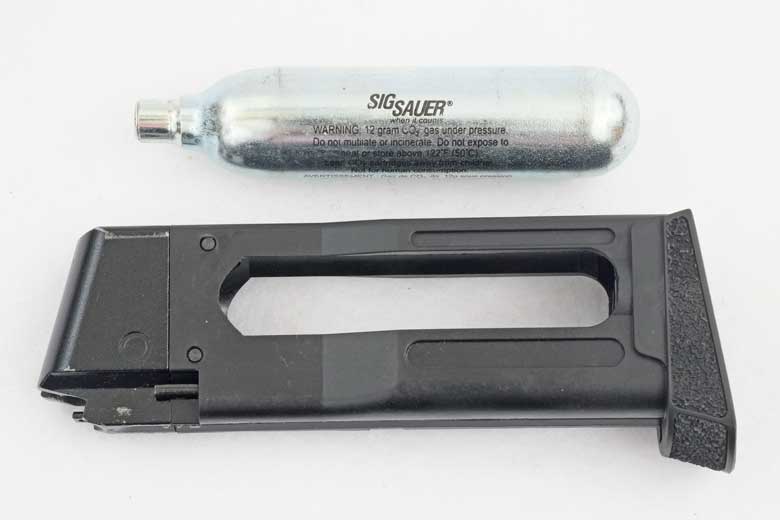 As a concealed carry firearm, the SIG SAUER P365 is not intended – or expected – to be a precision target pistol. It’s a close range tool for last-ditch personal protection.

However, the P365 BB pistol tested by HAM easily exceeded our “minute of soda can” tests at 6 Yards with all of the regular HAM test BBs. It actually displayed superior grouping to the SIG 1911 Max Michel BB Pistol a while back.

So, in this case, small size does not preclude good “BB gun level” accuracy at 6 Yards. The group only widened-out at 10 Yards, as you can see below. This is very good performance and – frankly – better than the HAM Team was expecting!

By using a center hold, Doug achieved good groupings in the center of the target at 6 Yards. The gun shot very low at 10 yards. But again, we need to remember that the P365 is intended for close range use. 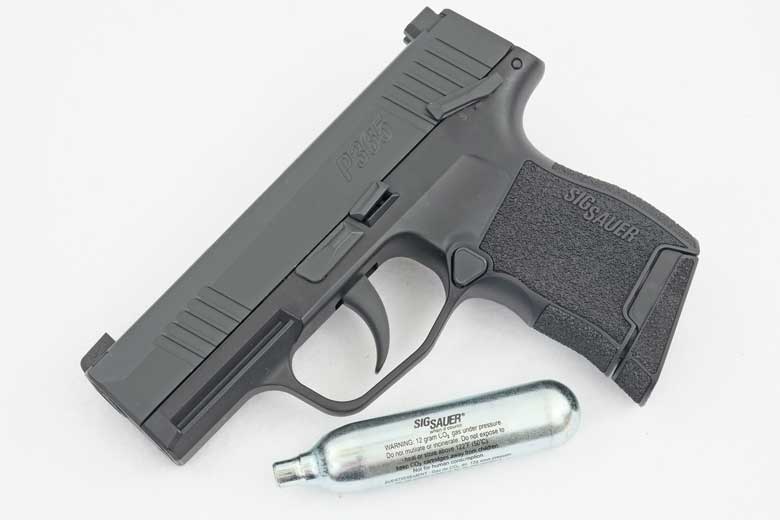 The major claim for the P365 BB pistol is that it represents a well-nigh exact version of the 9mm firearm. It certainly does!

Moreover, because of this similarity, it can be used as a training tool by owners of the P365 firearm. Again, we have an emphatic “yes”.

As this is an airgun, there’s the inevitable questions about Muzzle Velocity. SIG claims a maximum of 295 FPS for the P365 BB pistol. The P365 tested by HAM significantly exceeded this.

The fastest FPS achieved in HAM testing was 298 FPS average for a 10-shot string of Umarex Steel BBs. This included a first shot as high as 318 FPS.

As always, the projectile velocity attained by CO2-powered airguns varies with temperature. It increases by about 2 FPS per degree Farenheit increase.

As HAM testing was undertaken at a cool 68 degrees F, this means that the 298 FPS average we recorded would be as high as 342 FPS at a 90 degree ambient temperature. That’s waaaaaaay above the manufacturer’s claims!

The P365 BB pistol tested by HAM displayed fair consistency. Accuracy was very good or better with all the standard HAM test BBs at 6 Yards.

As with any CO2-powered airgun, the P365 BB pistol shoots slower and slower throughout the string. The slowing of successive shots is fairly predictable. Standard Deviation (the measure of shot-to-shot FPS variability in a string) was quite satisfactory for a BB gun at an average of 15.64 FPS.

The trigger pull weight varied by up to 10 Oz around its 7 Lb 14 Oz average. Again this was satisfactory and not really felt in use.

HAM Tester Doug Wall found the trigger pull of the P365 BB pistol to be “fairly smooth, but long”.  The sample tested by HAM also had a trigger pull weight that averaged around 7 Lbs 14 Oz. This is a Pound or so over the specs for the firearms version.

However, as a true blowback pistol, the trigger is not involved in advancing the projectile for the next shot. This makes it a genuine semi-automatic action, just like that of the 9mm version. 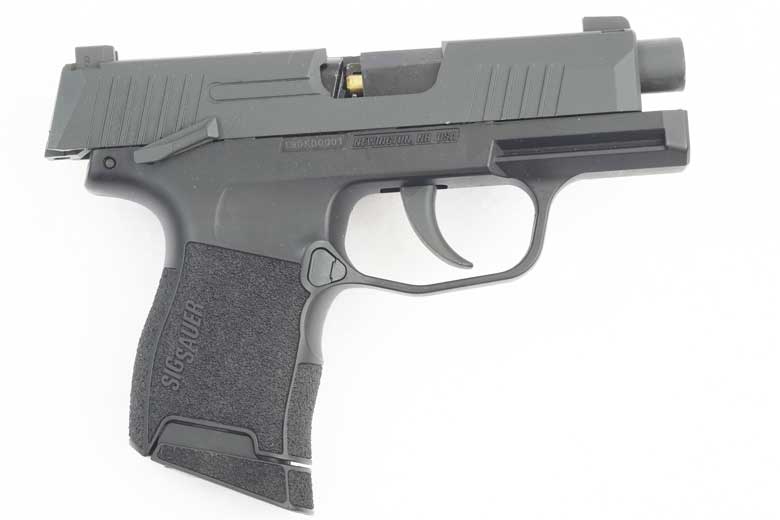 The blowback action felt good. However – being really picky – it’s true that the slide locks back at about half the travel of the firearm. It’s also less than the maximum slide travel of the pistol when firing.

This is a characteristic shared by several other blowback BB pistols. In this case, it’s probably another result of the very small size of the P365.

The safety lever is ambidextrous, functioning correctly from both sides of the gun. This is an improvement on some previous SIG Air pistols, which had the safety operable on one side only.

Safety operation was smooth and effective under test. 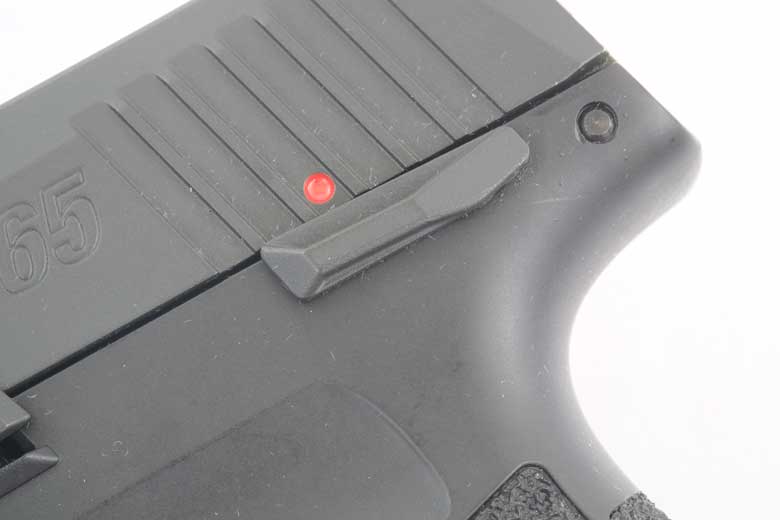 Another good feature of the P365 BB pistol is that the slide locks open after the last BB has been fired from the magazine. This is excellent and a feature that’s not present on many semi-automatic BB pistols which allow the gun to be “blank fired” even when no BBs are left in the magazine.

Again. another feature which replicates the action of the firearm realistically.

In HAM testing, the P365 BB pistol achieved 60 shots from one 12 Gram CO2 cartridge. That was before the Muzzle Velocity dropped to 200 FPS.

60 shots per fill is slightly less than average for the blowback replica pistols tested by HAM. However, as is indicated in that story, there’s only a certain amount of energy contained in one 12 Gram CO2 cartridge.

CO2-powered airgun designers have to achieve many things with that fixed amount of gas. In the case of the P365 BB pistol, it’s likely that the requirement for extremely small size trumped FPS and shot count. The HAM Team understand this and feels that the designers made some good calls in producing this air pistol

As with centerfire pistols, you can’t have it all in a concealed-carry package! 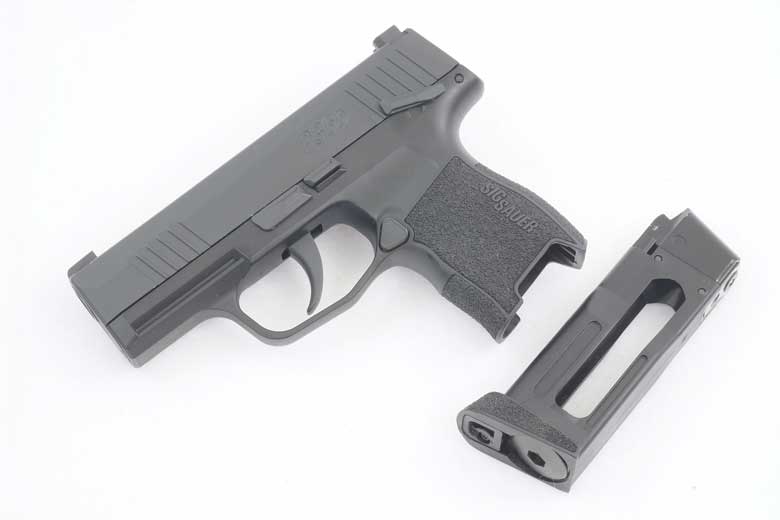 Muzzle Velocity of the P365 BB pistol tested by HAM was adequate at between 265 and 300 FPS, depending on the BB used. CO2-powered airguns will tend to shoot faster with a longer barrel.

The P365 has a very short barrel, so it’s no surprise that Muzzle Velocity is on the low side for a blowback replica BB pistol. That’s exactly what we would expect but it’s still plenty powerful enough to put holes in paper.

Overall appearance and finish of the P365 BB pistol tested by HAM was excellent.

Interestingly, the gun tested by HAM has the serial number 19DK00001. SIG Air confirms that this is a genuine production pistol and not a pre-production unit. In that case, the number makes us think that the HAM test gun was the very first production P365 BB pistol! 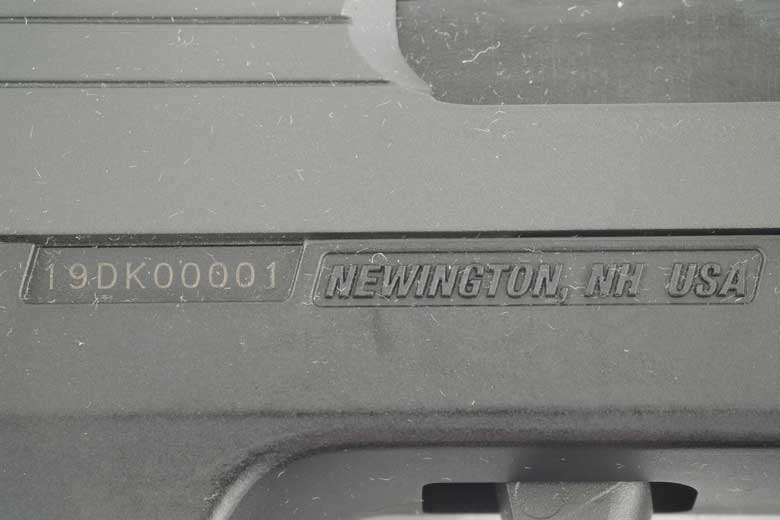 Another good feature is that the obligatory warning notices – “This is not a toy” etc – are printed very unobtrusively on the underside of the frame. This obviously complies with legal requirements while not offending the sensibilities of the many CO2 replica buyers who find such warnings displayed in bold white text to be irritating and unrealistic.

The P365 BB pistol is supplied complete with a well-written and illustrated manual. It’s in English only. There’s also a very substantial 1/4-Inch Allen wrench and a pack of steel BBs to get you started. (That’s even though SIG does not sell BBs as a separate item). 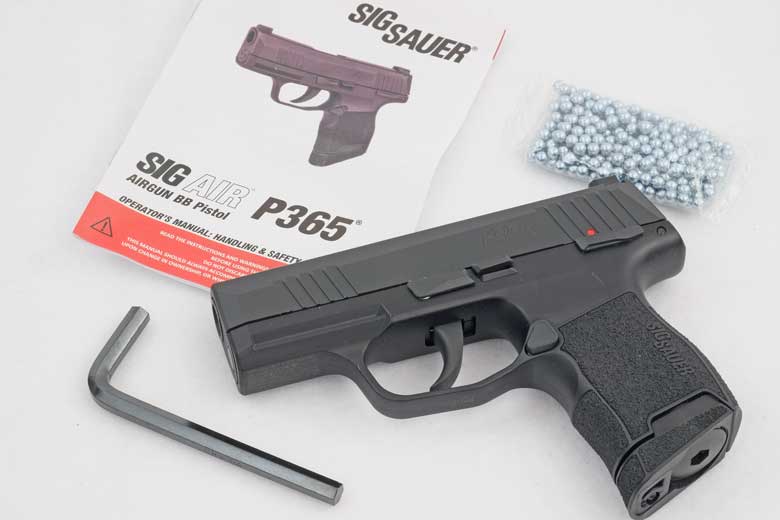 In common with other SIG Air products, the P365 is well packaged. Many $80 pistols are clamshell packaged. Here we have a nice card sleeve with a two-part plastic inner.

This packaging looks classy and protects the gun well during its journey to you. It also costs money and it’s good to see that SIG is not cutting corners on presentation to achieve the remarkably low price. 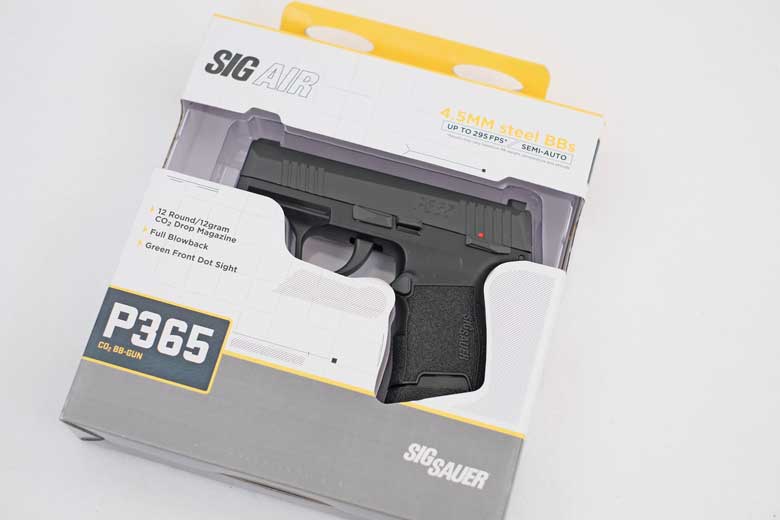 SIG has not skimped on warranty coverage either! The P365 BB pistol has a 12-month warranty from the company. This compares well with the 90-day coverage offered by some other manufacturers of replica BB pistols.

Note that the P365 BB pistol is not field-strippable and SIG recommends that the gun is not disassembled for any reason.

There’s one operational matter to bear in mind when loading the P365. It’s covered in the Operator’s Manual, but it’s worth repeating here…

BB loading is very easy. There’s a notch in the magazine to hold down the BB follower: that’s good. However, BBs are loaded through the top of the magazine and – rather unusually – there’s loading port tab that must be pulled down to insert the BBs.

This is one additional step than is normal for BB loading, but this operation soon becomes intuitive after loading a few magazines. Spare magazines are available and it would be a great plan to buy a few extra to maximize range time. 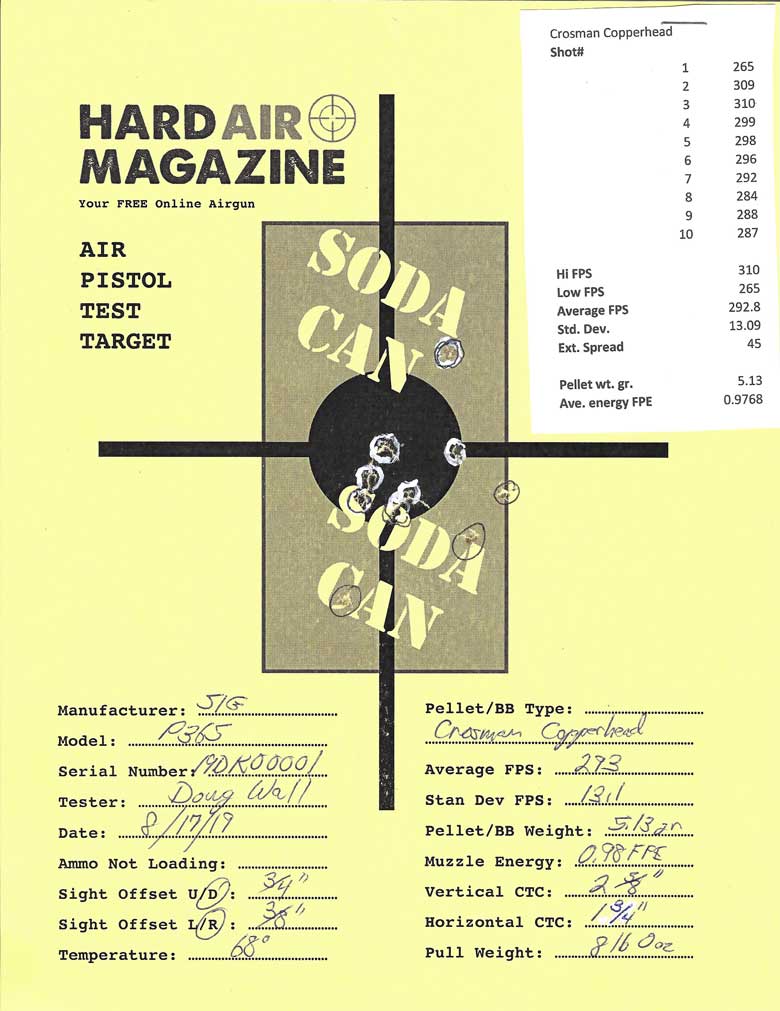 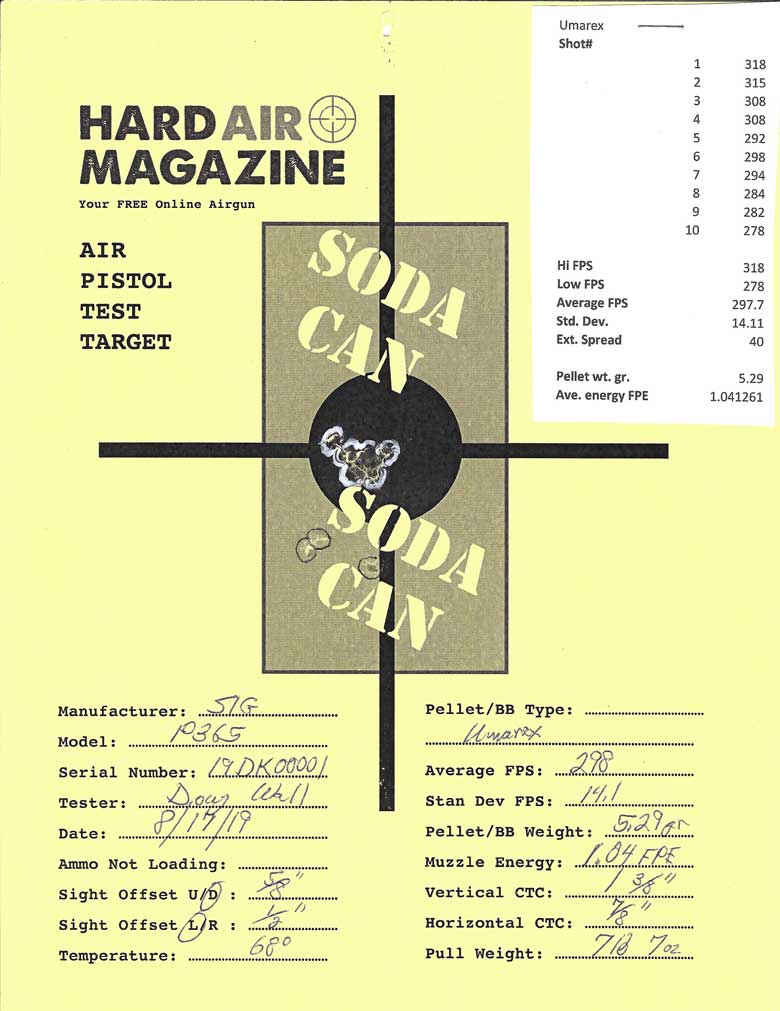 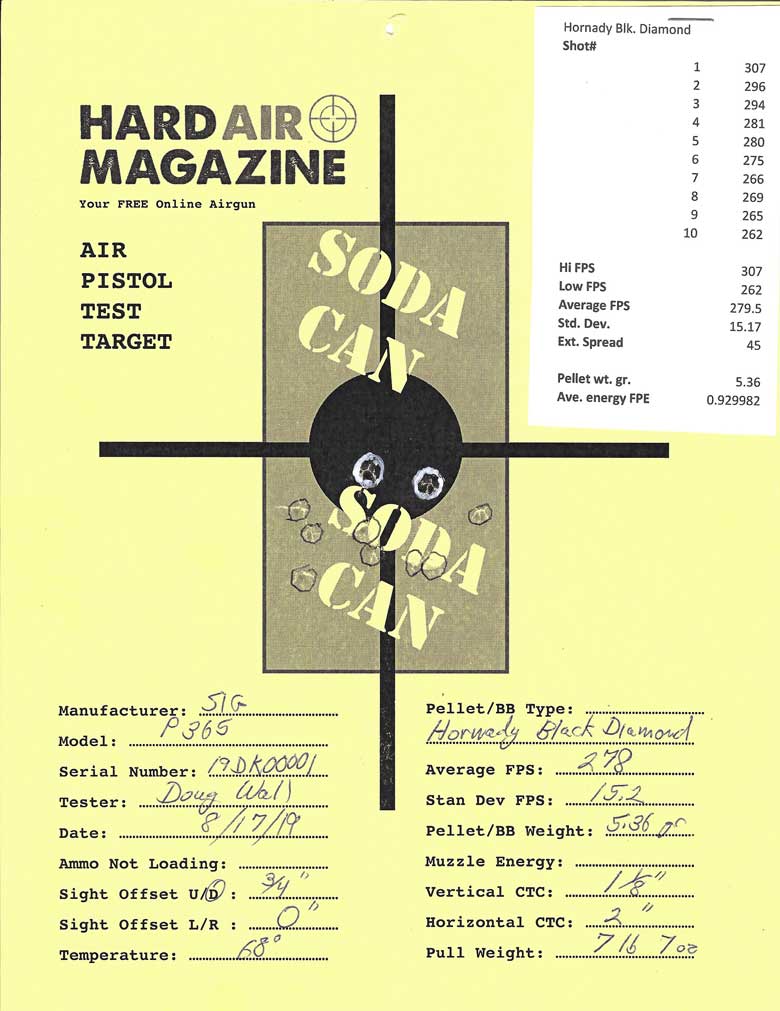 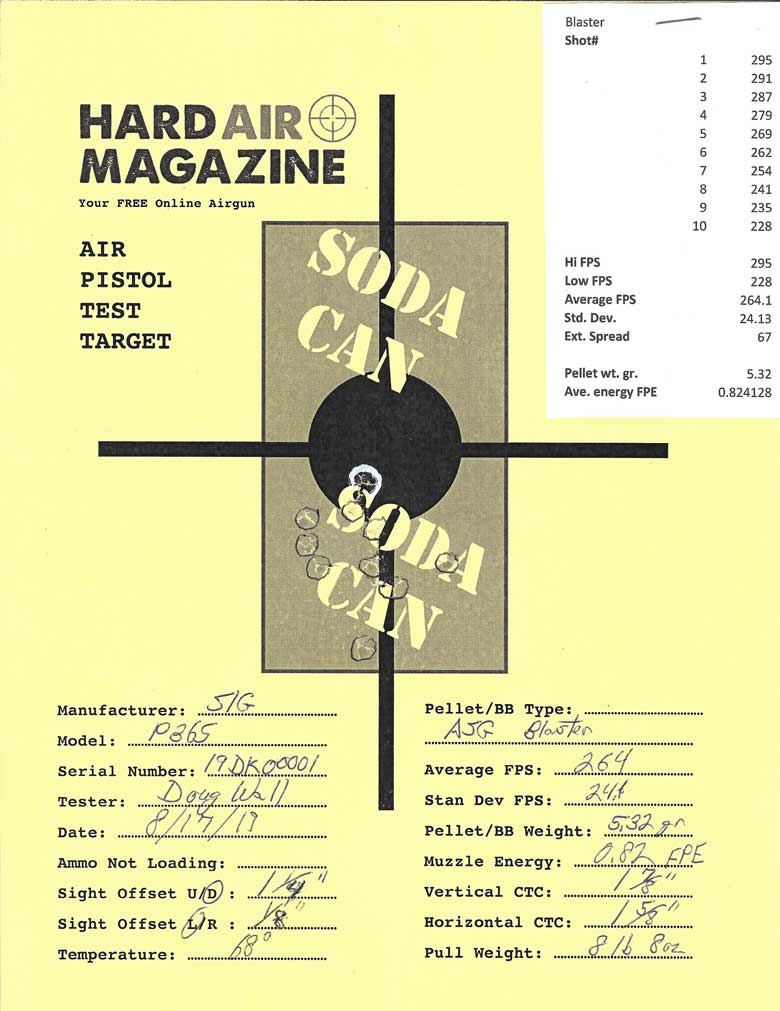 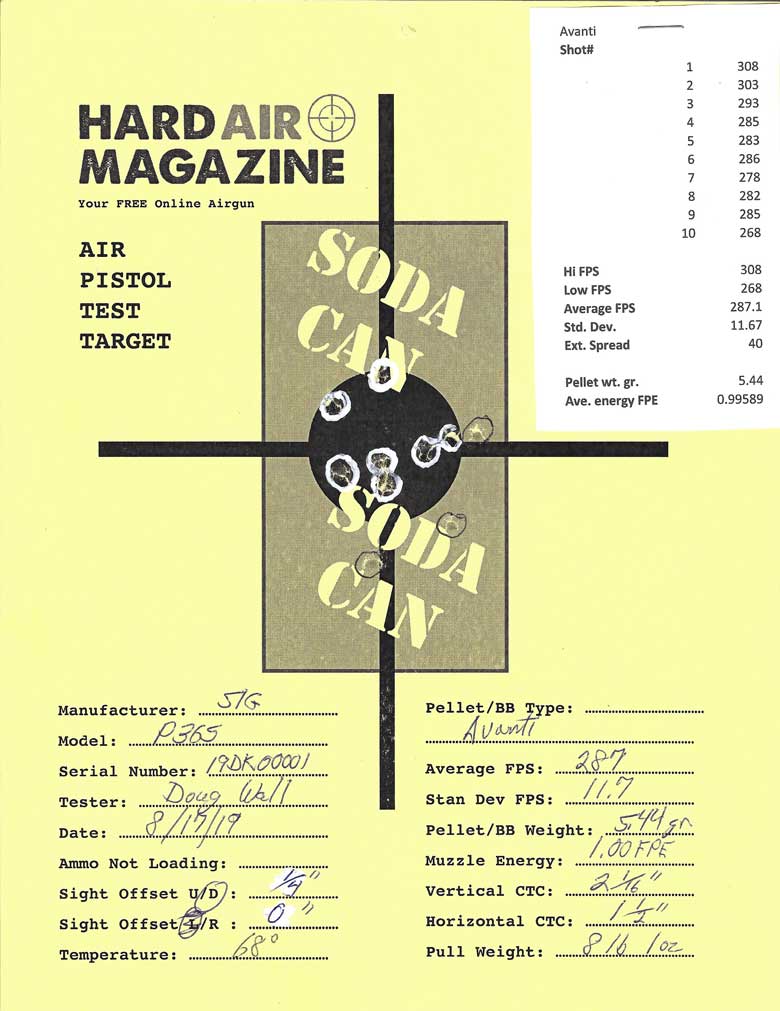 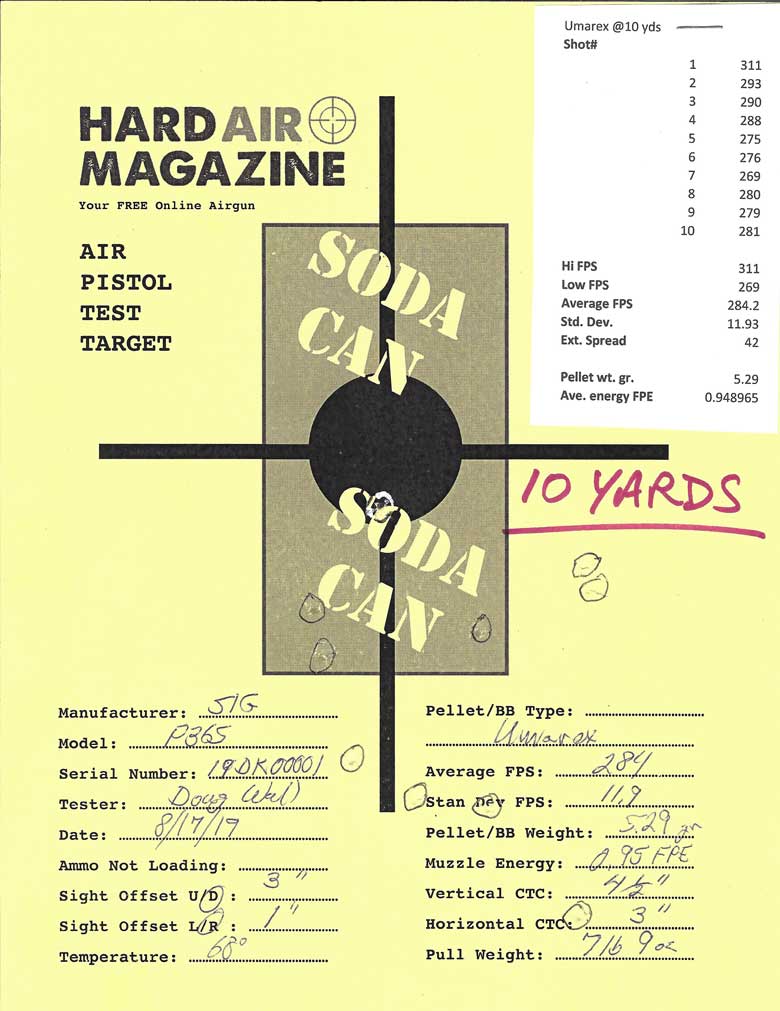