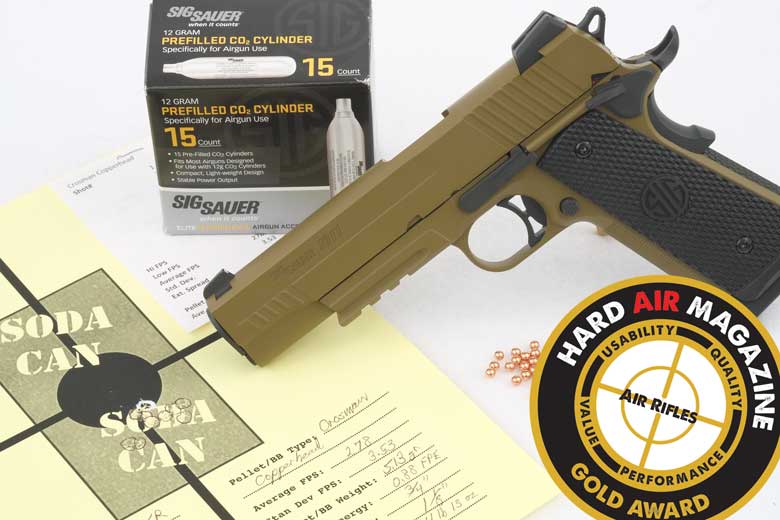 Slow FPS - but we understand why.
Not the best shot count.
Nothing else we can think of!

The SIG Emperor Scorpion BB Pistol is the best SIG pistol yet tested by HAM. It's an easy Gold Award winner!

The HAM Team loved the outstanding realism, great blowback and quality appearance. Accuracy was very good and the price is fair.

As explained below, that great blowback was clearly prioritized as a design decision over FPS and shot count. In the HAM Team's opinion, that was the correct choice. We'll take a strong, realistic blowback over a few more FPS, any day!

At a Street Price of $109.99, the SIG Emperor Scorpion BB Pistol is well-priced in today’s replica BB pistol market. SIG replicas are extremely popular among HAM readers, this is the company’s best pistol yet.

That makes it great value and a recommended purchase. 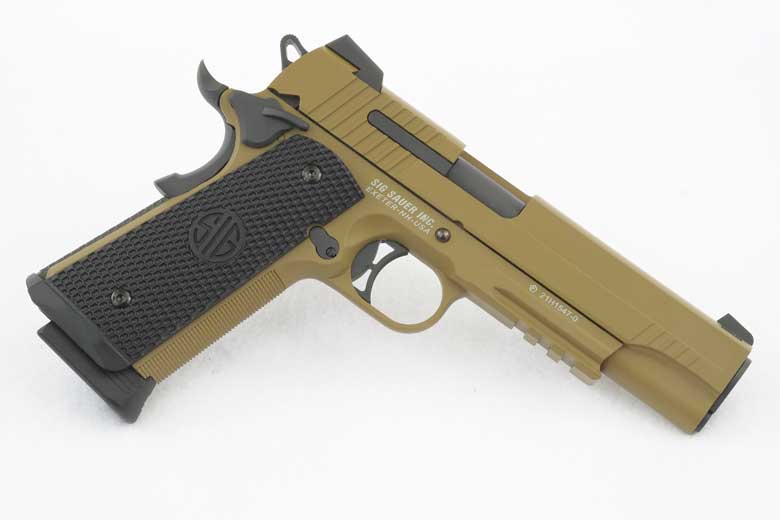 The SIG Emperor Scorpion BB Pistol looks and feels just like the centerfire version. And a high quality one, at that.

Size, weight, appearance, functionality all mirror that of the firearm (except for the sights being non-adjustable). This is clearly an ideal BB gun trainer for anyone with a 1911.

Highlights include the ambidextrous safety. So often on replica airguns the right side safety lever is not functional. It is here in this gun! 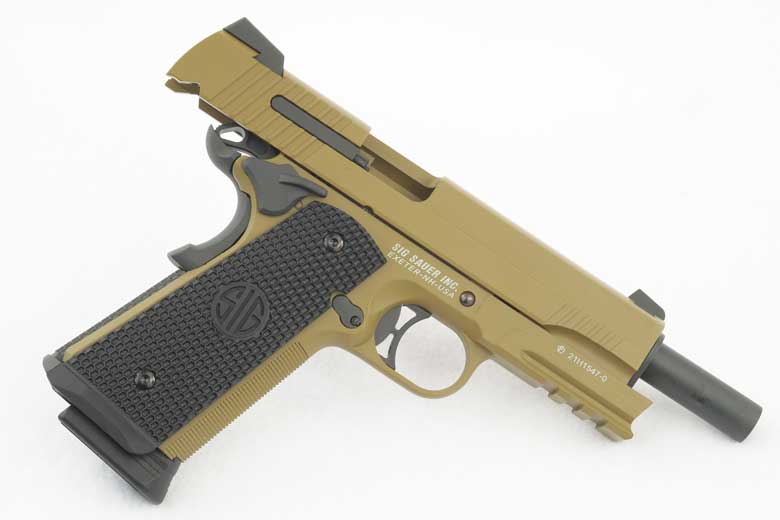 The slide holds fully open as you’d expect. It holds back after the last shot, too. Again this is functionality not always found in air pistols. And – of course – it can be released authentically by means of the slide stop lever. Push down the slide stop when the slide’s open and the slide slams forward realistically, leaving the hammer visibly cocked and the gun ready to fire.

The hammer functions in a most realistic manner too. Again unlike many replica airguns, the hammer actually hits metal when the gun is fired. (In many cases, the hammer actually stops short of impacting anything). It’s yet another aspect of the SIG Emperor Scorpion BB Pistol that screams “realism”.

Given that the BB version of the Emperor Scorpion costs a mere $1,040.00 less than the centerfire version, there has to be some cost-reductions found somewhere in this gun. And there is. It’s in the sights.

The iron sights are perfectly usable and an excellent visual replica of the firearm sights. However they are not adjustable. 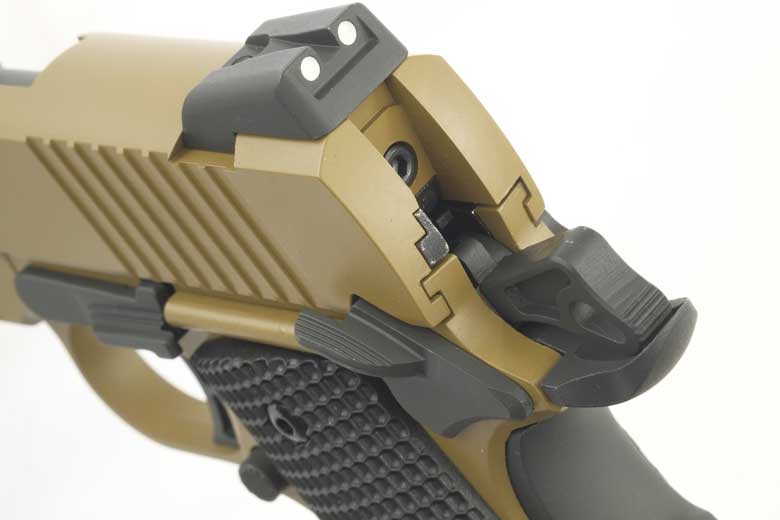 This lack of adjustability proved to be a disadvantage as the SIG Emperor Scorpion BB Pistol tested by HAM showed a determined tendency to shoot low. Check out the test targets below to see that…

On average, the gun shot about an Inch (or so) low at 6 Yards. Maybe that’s not too important for a primarily training role. And regular plinkers will probably soon learn to correct intuitively for this. But it’s a disappointment nonetheless, given the overall excellence of the product.

Well, actually, there is one possible way to correct this POI issue. Attach a laser to the under-barrel Picatinny rail of the SIG Emperor Scorpion BB Pistol, sight it in and you can correct the Point of Impact. But it would still be better if the iron sights were adjustable.

Every shot HAM Tester Doug Wall fired for this review was easily within “minute of soda can” at 6 Yards. And that with every type of BB in HAM’s standard test suite.

In past HAM test reviews we’ve found that replica BB pistols with powerful blowback tend to have poor accuracy. However this is definitely not the case with the Emperor Scorpion. In this case, you get both strong blowback and accuracy. Congratulations are due to the designers!

At 10 Yards, the group opened-out quite a lot, as you’ll see below. However, all 10 BBs would still have – just – been within that “minute of soda can” accuracy standard, had there been a way to adjust the sights to compensate for the low and left shooting. That’s very good for a BB-shooter!

The performance of all CO2-powered airguns revolves around one immutable factor. There’s a fixed (well, relatively fixed) amount of energy contained in the 12 Gram CO2 cartridges that are used to power replica BB pistols like the Emperor Scorpion.

As HAM has proved in this analysis based on our standardized testing, the energy in this CO2 cartridge can be utilized in one of three ways by the guns designers. It can provide higher FPS, a larger shot count or – in the case of blowback guns – a more realistic blowback action.

It’s simply not possible to combine the highest Muzzle Velocity with the greatest shot count and the strongest blowback action! So designers will make a choice based on what the company considers most important.

In the case of the SIG Emperor Scorpion BB Pistol, that most important characteristic was clearly blowback realism. SIG claims that this is an accurate replica of the centerfire 1911. It most definitely is. And the strong blowback produced by this BB pistol is a big contributor to this.

That means that we see a a maximum Muzzle Velocity claim for the gun of “just” 300 FPS. 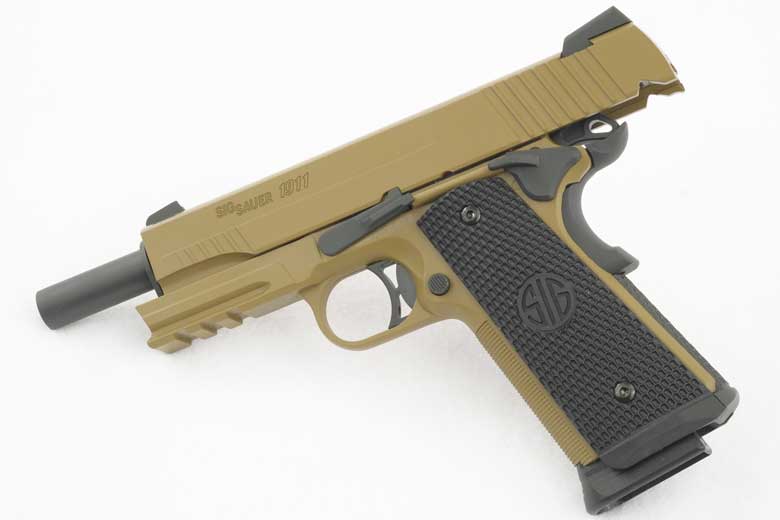 Compared to this 300 FPS spec, HAM tests showed a maximum of 278 FPS. However this was due to the gun being shot in Doug Wall’s cool – 61 degrees F – basement range.

All CO2-powered guns are effected by ambient temperature. In fact, they shoot faster by approximately 2 FPS per degree F change in temperature.

This means that our 278 FPS at 61 degrees F would reach that 300 FPS specification at a more comfortable 72 degrees F. In hot – 90 degrees F – weather, the same gun would shoot the same BBs at no less than 336 FPS. The change in ambient temperature is responsible!

So it’s clear that SIG’s 300 FPS specification for the Emperor Scorpion is very realistic and will probably be exceeded by most owners, at least in slowfire shooting.

Strong consistency was also a hallmark of the SIG Emperor Scorpion BB Pistol tested by HAM. The average Muzzle Velocity Standard Deviation was just 6.0 FPS. That’s a terrific figure for any CO2-powered airgun and one that matches some quality PCPs we have tested. 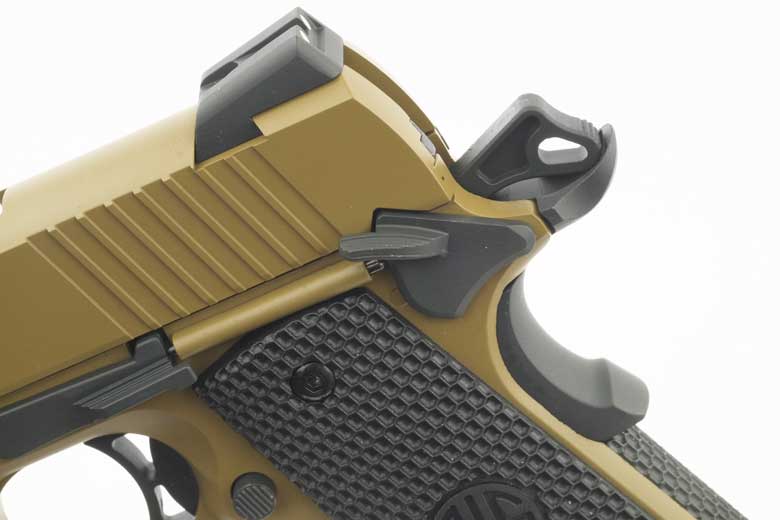 The trigger pull demonstrated good consistency, too. With a minimum pull weight of 4 Lbs 4 Oz and a maximum of 5 Lbs 9 Oz under test, this was definitely “combat grade acceptable”.

Trigger pull matches that of the typical firearm at around 5 Lbs. The SIG Emperor Scorpion BB Pistol tested by HAM actually had an average trigger pull weight of 4 Lbs 13 Oz. 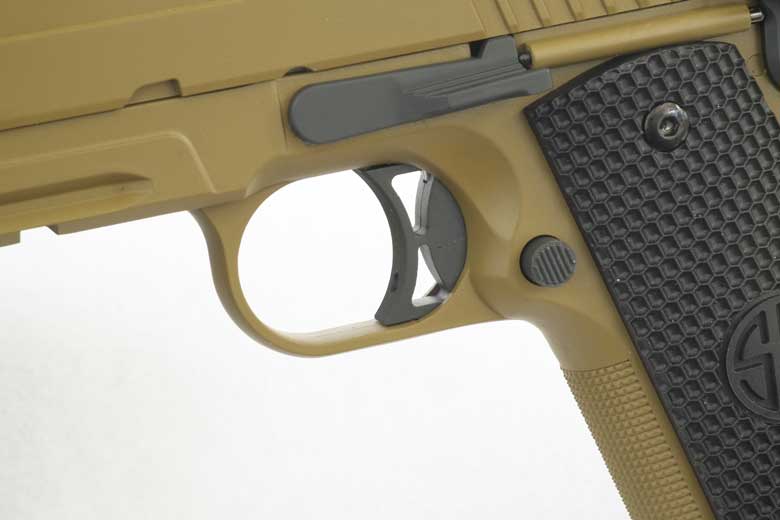 The single-stage trigger is smooth and feels good for this type of airgun. It’s predictable and consistent in use.

Both the grip safety and ambidextrous manual safety work well and precisely. 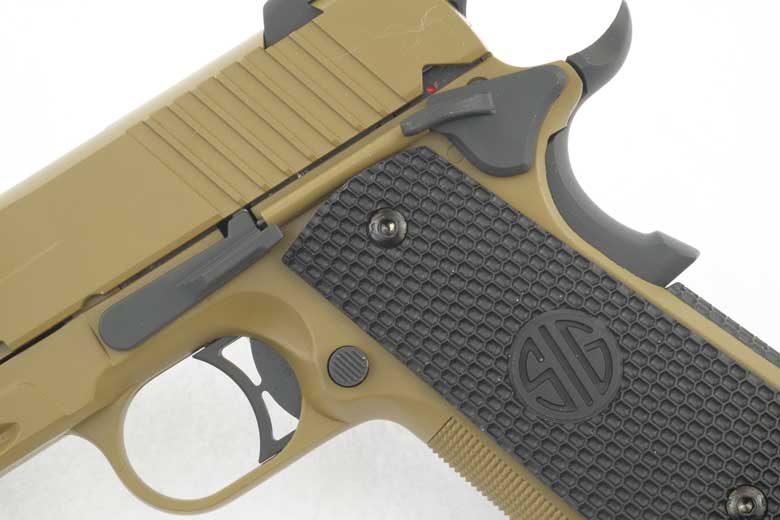 As discussed above, the designers of the SIG Emperor Scorpion BB Pistol obviously prioritized blowback over FPS and shot count. This means that the shot count for this pistol is relatively low. 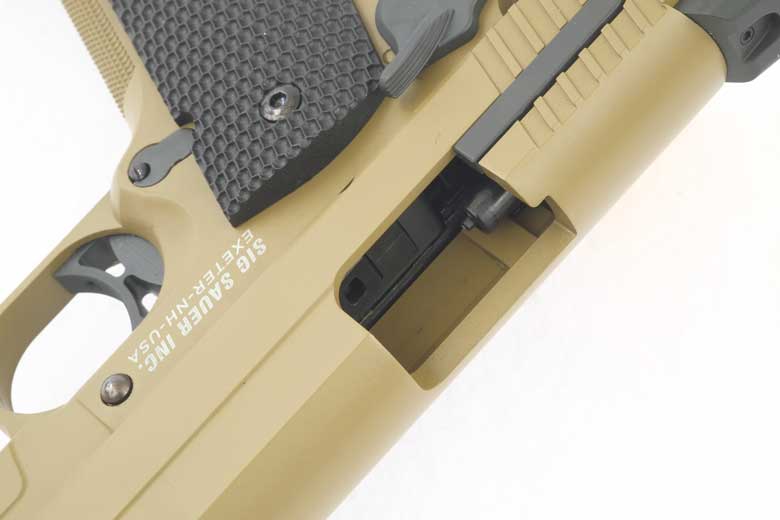 In HAM testing, we achieved just 60 shots from one 12 Gram CO2 cartridge. This is on the low side for a blowback BB pistol. However HAM has tested guns with lower shot counts and the reason for this relatively low number of shots is – in our opinion – a fair trade-off for that highly-realistic blowback action.

One other strength of the SIG Emperor Scorpion BB Pistol tested by HAM lay in the fact that the slide continued to blow back for the whole of the 60 shots before the CO2 was depleted. In some other blowback BB pistols, the slide ceases to function at low levels of remaining CO2. That’s definitely not the case here! 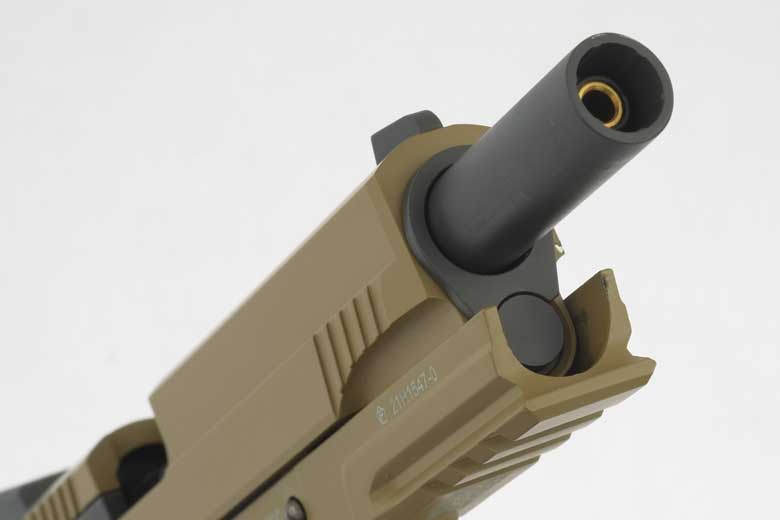 Yes, the Emperor Scorpion’s Muzzle Velocity is not stellar. But it’s definitely good enough for the tasks at hand: making holes in paper targets and shredding feral soda cans. 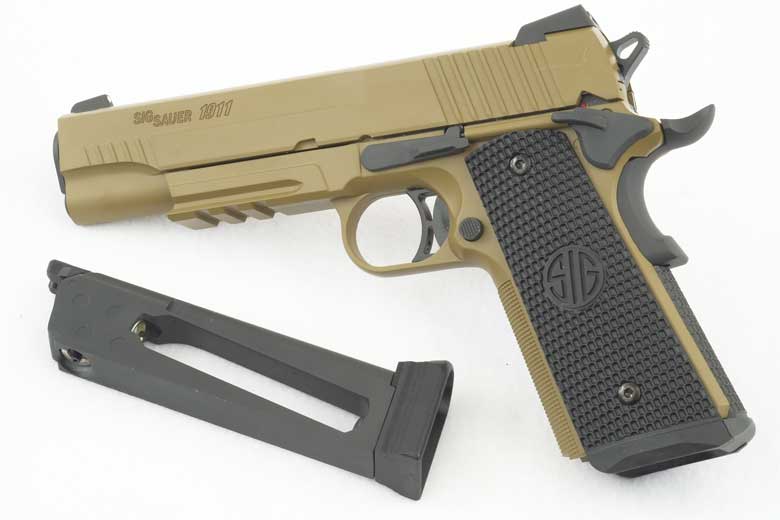 Everything about this BB gun is sharp! Both synthetic and metal molded parts are beautifully molded. In particular, the molded grip panels on the front and back straps of the pistol grip are outstanding. Ditto for the grip side panels.

The result is a superb tactile sensation every time the SIG Emperor Scorpion BB Pistol is picked-up. It just feels so good that you know it’s going to be fun to shoot! 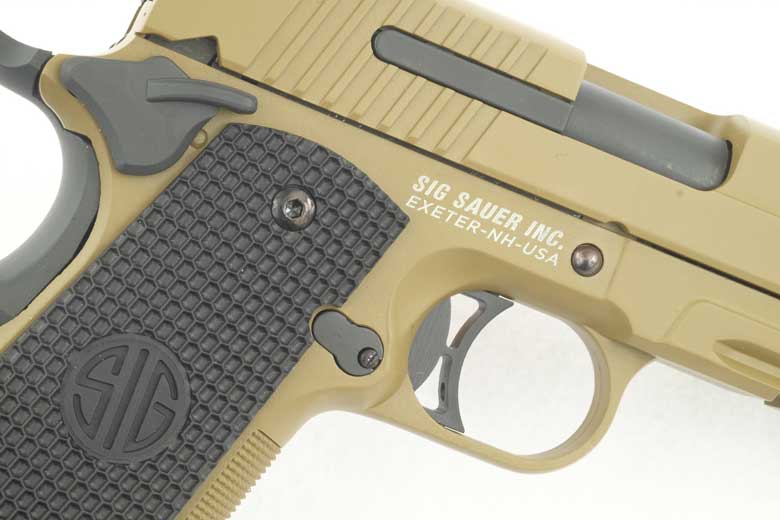 The SIG Emperor Scorpion BB Pistol is easy to buy. Given SIG’s outstanding distribution network, you’ll find it available online from airgun-specialist sites like Pyramyd Air. Look out for it, too, in big box sporting goods stores and regular gun shops.

There’s a good-quality owner’s manual included with the gun. It’s in English only but is well-illustrated and covers all the essentials 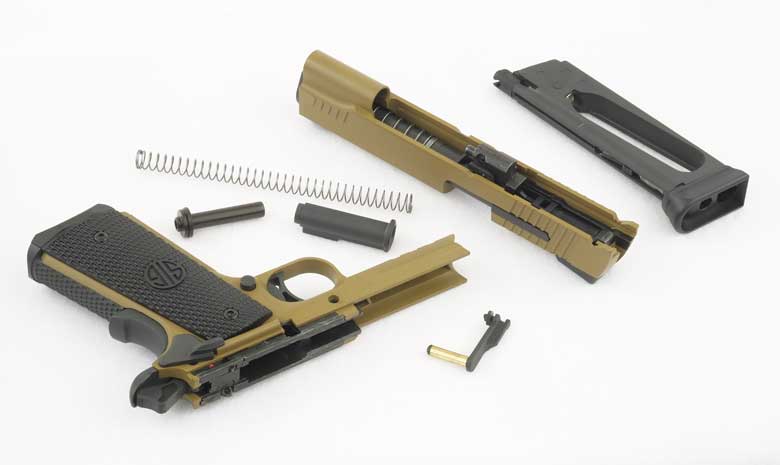 The Emperor Scorpion field strips just like the centerfire version. That’s another great attribute for many owners.

BB loading is also convenient and easy. In fact much more so than with many other BB magazines. 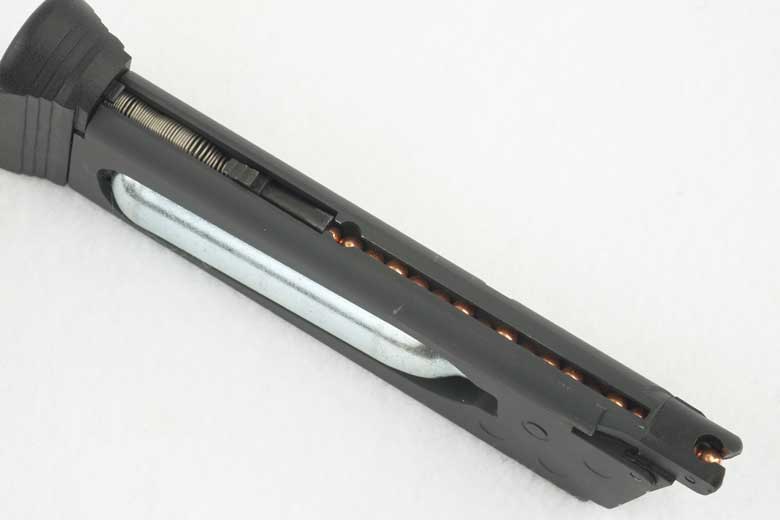 In the case of the Emperor Scorpion, the BB follower can be locked down as shown in the photograph below. BBs can then be loaded through the loading port and the follower released when complete.

This means that there’s no need to hold down the BB follower or risk stripping a thumb nail as is the case when loading many BB guns. You might have thought that all BB magazines should load as easily as this, but they don’t! 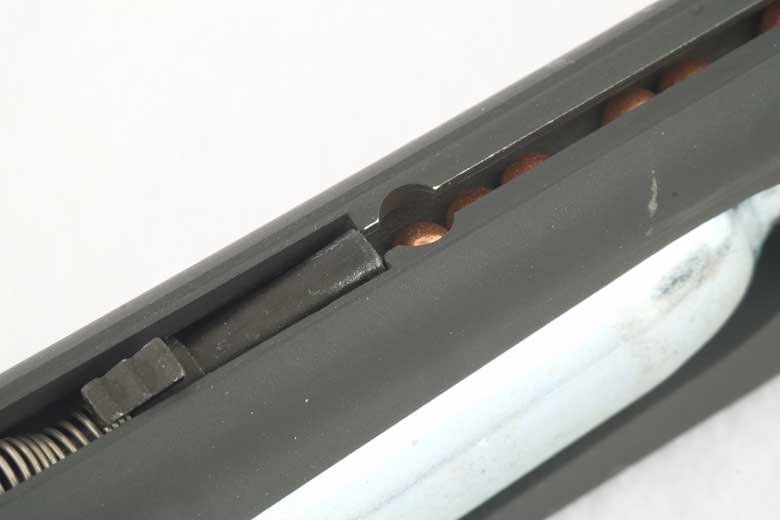 SIG recently updated their warranty coverage for this airgun class to 180 days, refer to https://www.sigsauer.com/warranty for details. So the warranty is less than the 12 months you may see indicated (incorrectly) in some places online. However, it’s still twice as long as that of many replicas which carry 90 days only.

Another important maintenance point is that the valve is built into the drop-free magazine. This means that any valve problems can be rectified simply by replacement with a new magazine.

Finally, SIG has moved away from largely plastic clamshell-based packaging to completely recyclable card with this product. That’s a good move that helps save the planet! 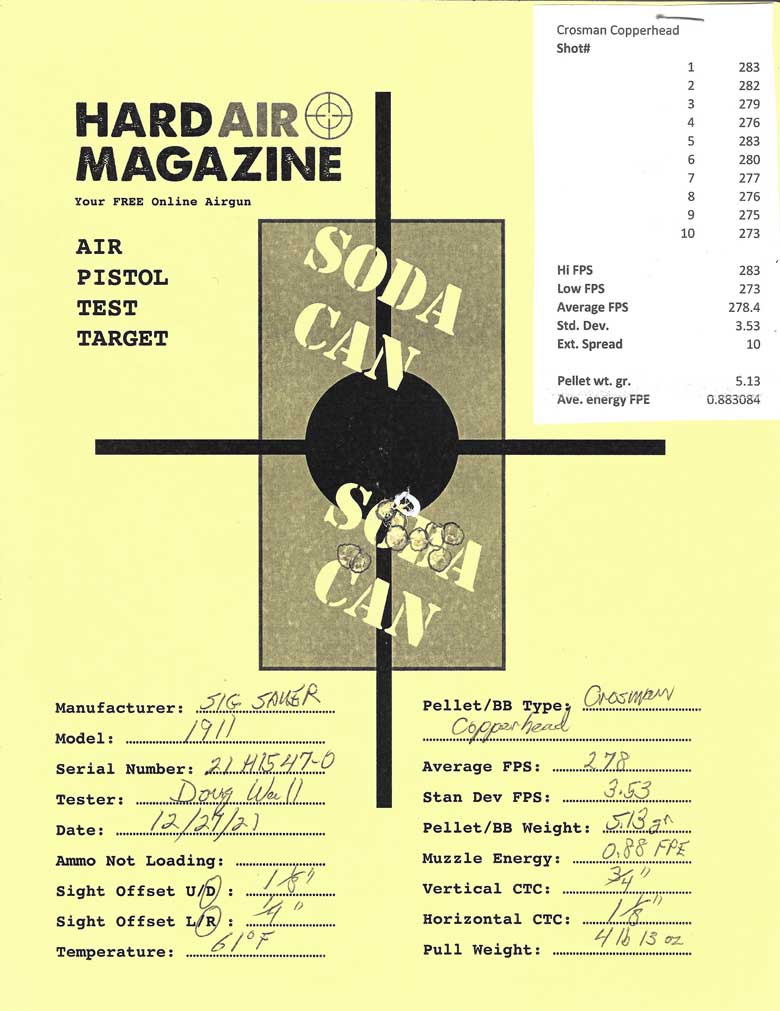 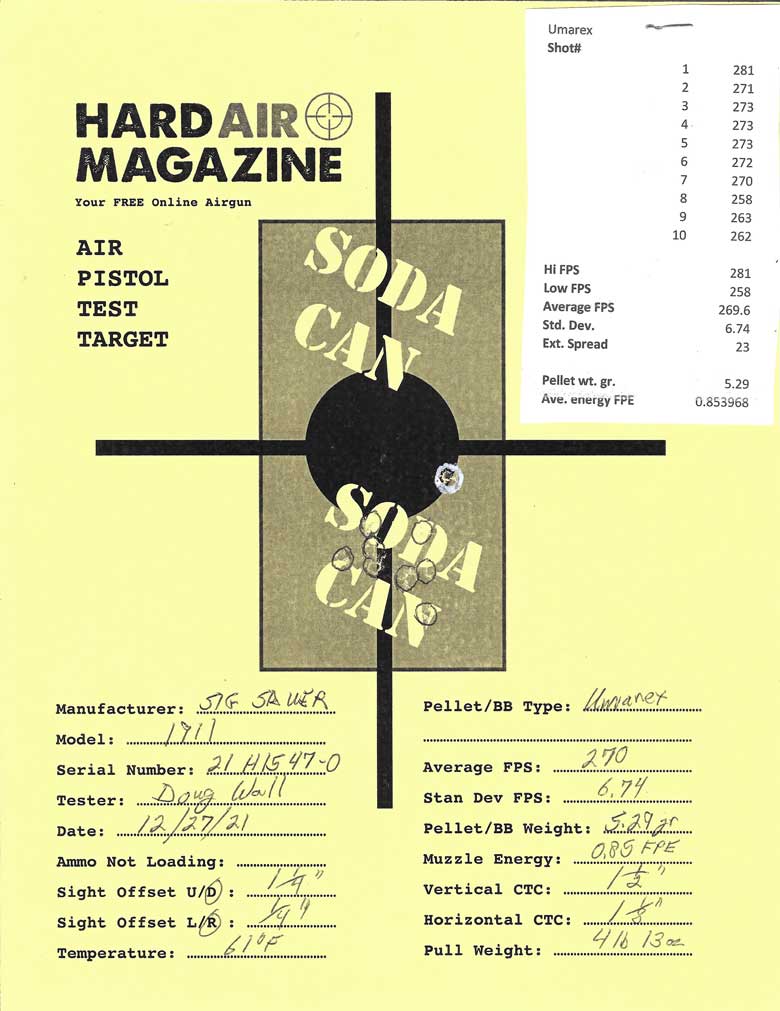 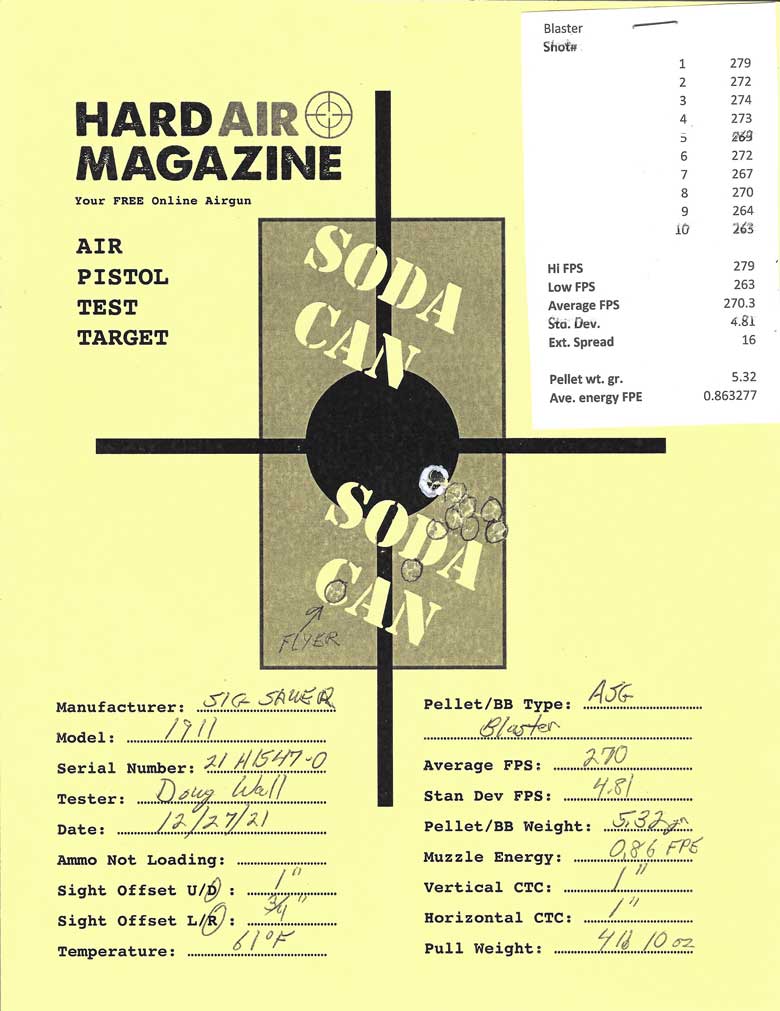 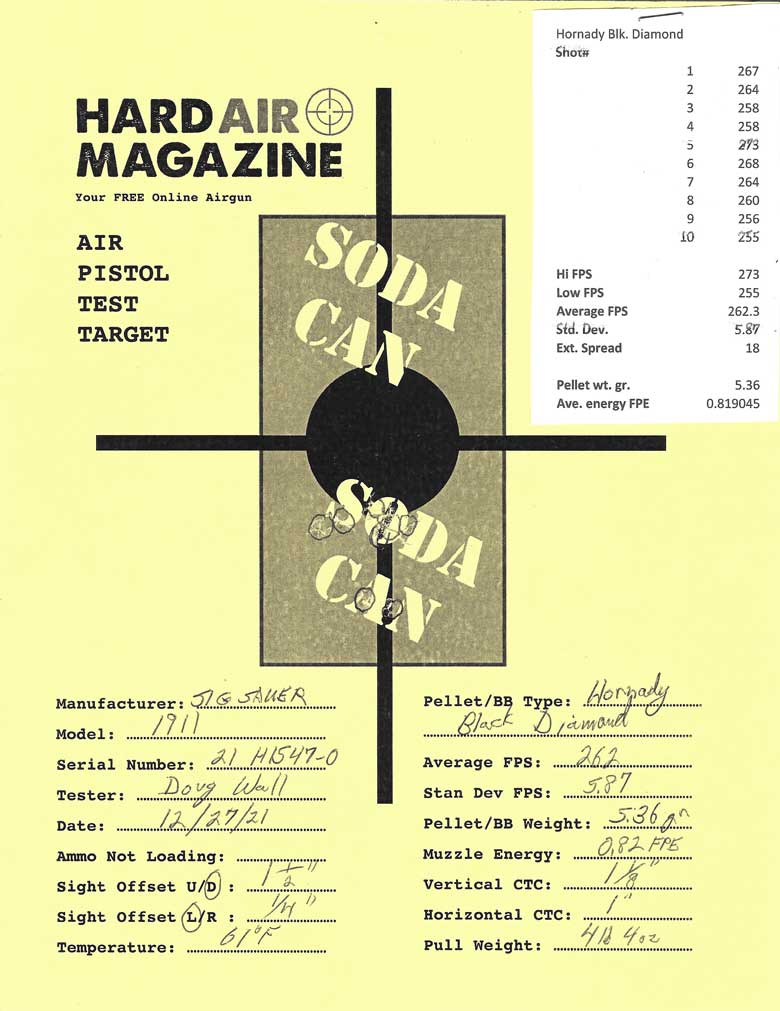 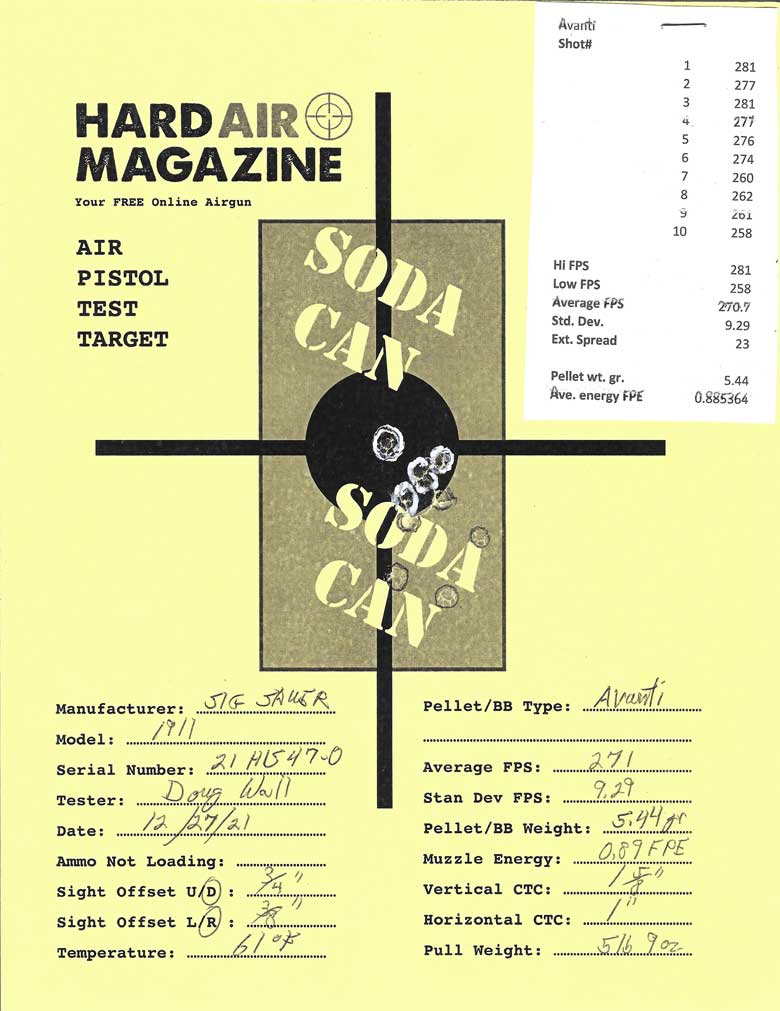 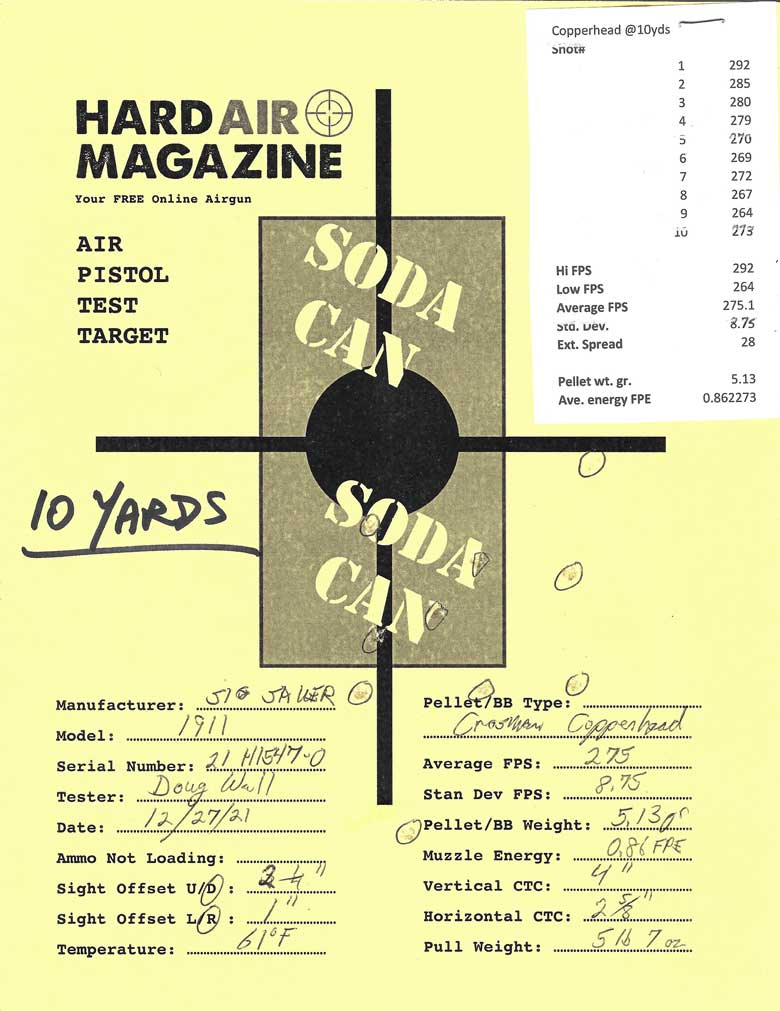