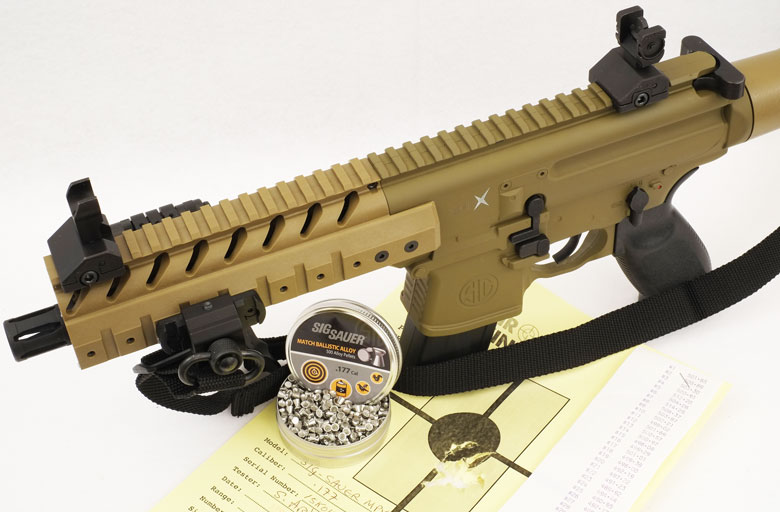 OK, so sometimes I can be wrong. Very wrong! I had previously tested the SIG SAUER MCX air rifle for HAM. It scored really high on the fun end of the spectrum, but not so well compared to our usual HAM air rifle test protocol. I thought the SIG SAUER MPX airgun would be very similar. Wrong, wrong, wrong!

You see, the SIG SAUER MPX airgun is – in my personal opinion – just about the perfect plinker. 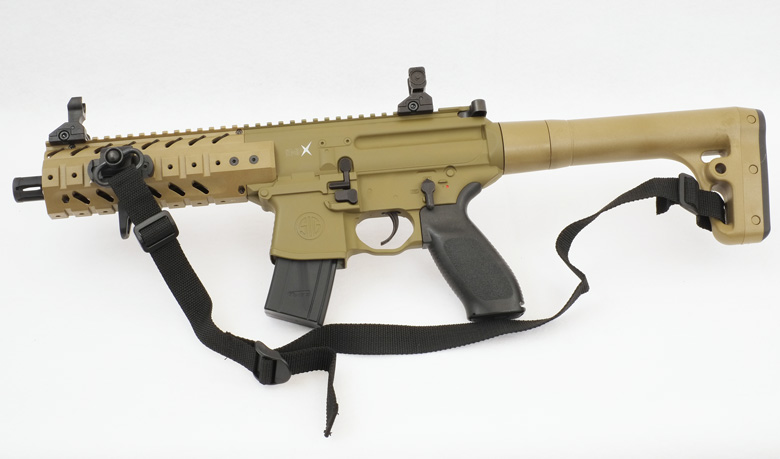 Waaaaay back, in the UK, I was taught to shoot by my old pal Ken, who had been in the SAS (British Special Forces) many years before. He’d fought in Korea, Malaya and several other dirty little wars – and he had the scars to prove it, both times from mortar rounds. Ken HATED mortars, as you can imagine!

Ken was not a great shot in the sense of precision target level accuracy. He didn’t claim to be a sniper. But he could lay down a stream of fire incredibly fast – even with a bolt action Lee Enfield – that would hit a figure target every time with “good enough” accuracy to put that target out of action without fail. That had been his job and he was extremely good at it, even many years later.

I looked at the SIG SAUER MPX airgun and the thought hit me. Old Ken would just love this gun!

So I picked the SIG SAUER MPX airgun out of its box and decided to set it up as I felt I would like it. First I installed an extra cost Leapers laser sight on one of the side Weaver/Picatinny rails. 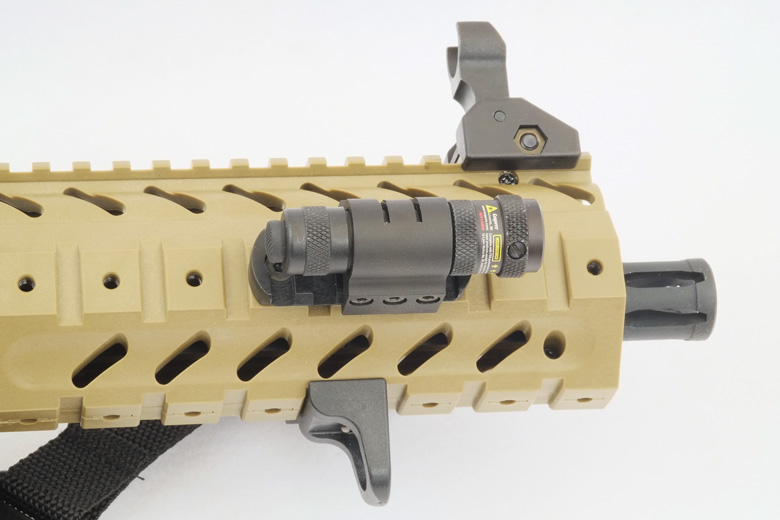 Then I attached the red dot sight that had been included in the box with the SIG SAUER MPX airgun. 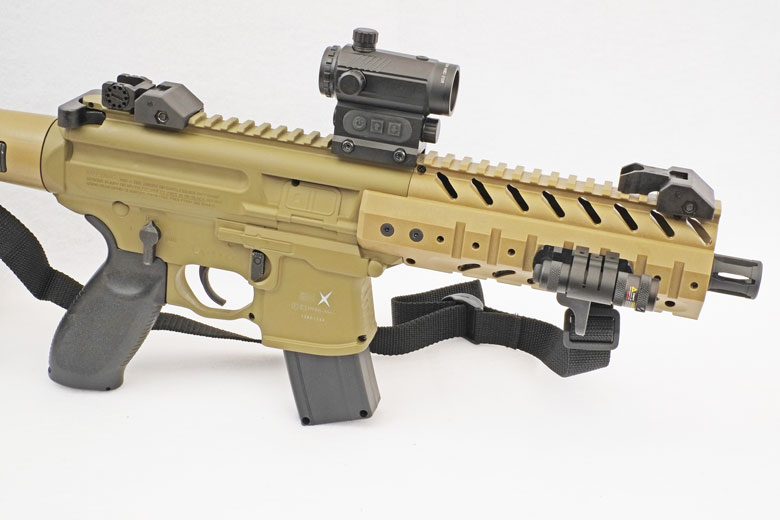 And althougfh I tried both these sighting systems, I found that I actually preferred the M16-style flip-up iron sights that were also supplied with the SIG SAUER MPX airgun.

In addition, I had already attached an extra-cost front sling swivel and nylon web sling and moved the forward hand stop back. 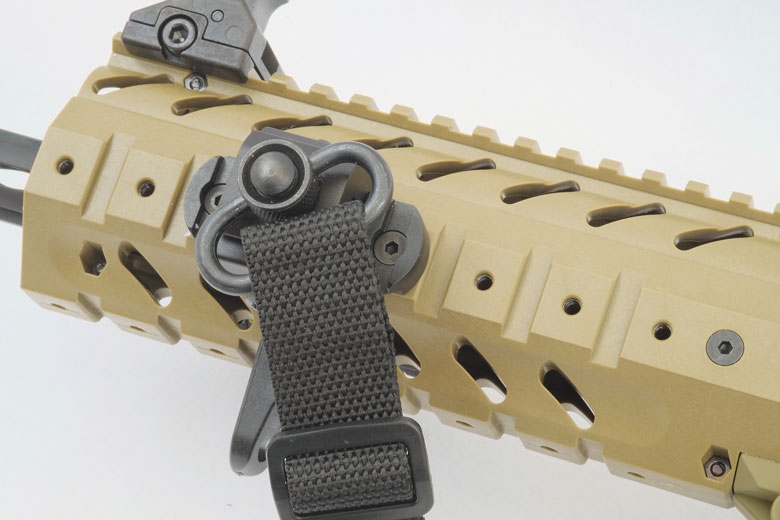 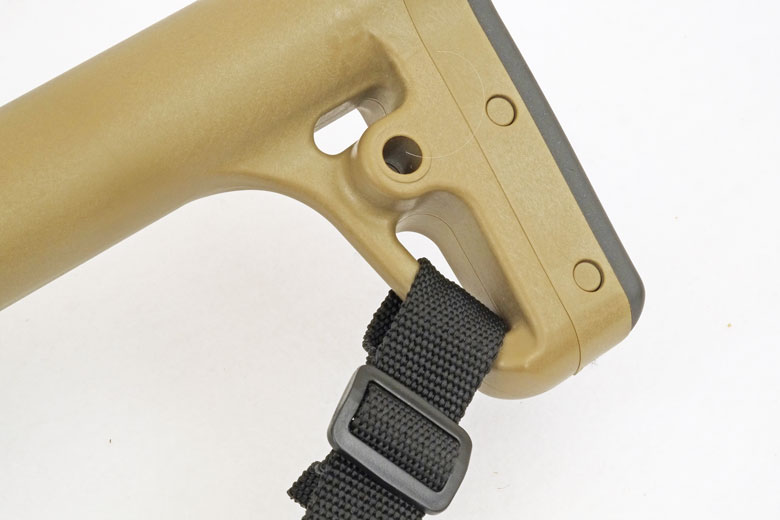 Now, when I wrapped the sling around my arm, my hand pushed against the hand stop, the sling was nice and tight. I had a very stable, repeatable platform to shoot the SIG SAUER MPX airgun. The sight picture through the small aperture of the flip-over rear iron sights looked good. This was how I wanted to shoot the gun! 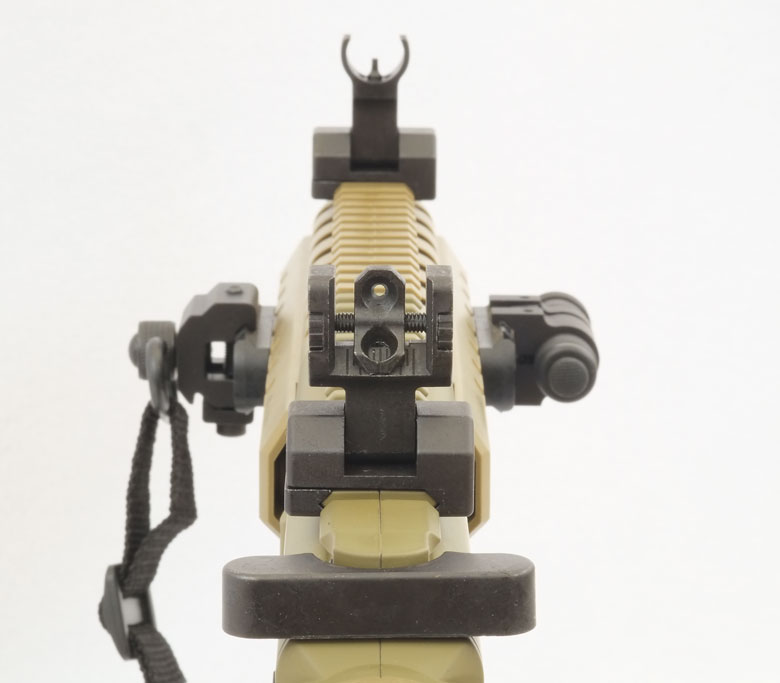 Next, instead of our standard HAM test pellets, I loaded the magazine full with 30 SIG SAUER Match Ballistic Alloy pellets. I wrapped the sling around my arm, pulled back the cocking lever and let it slam forward, snapped off the safety and just fired all 30 shots offhand in less than 45 seconds using the iron sights.

As you can see from the HAM “soda can” target below, the results were fantastic. The group size for 30 shots at 10 yards was just over 1-inch center-to-center and very close to the bull. (The SIG SAUER MPX airgun was fired with the iron sights set from the factory, I didn’t even sight the gun in).

Every shot was well inside the soda can outline at 10 yards. That’s much better than sub-machine gun accuracy. 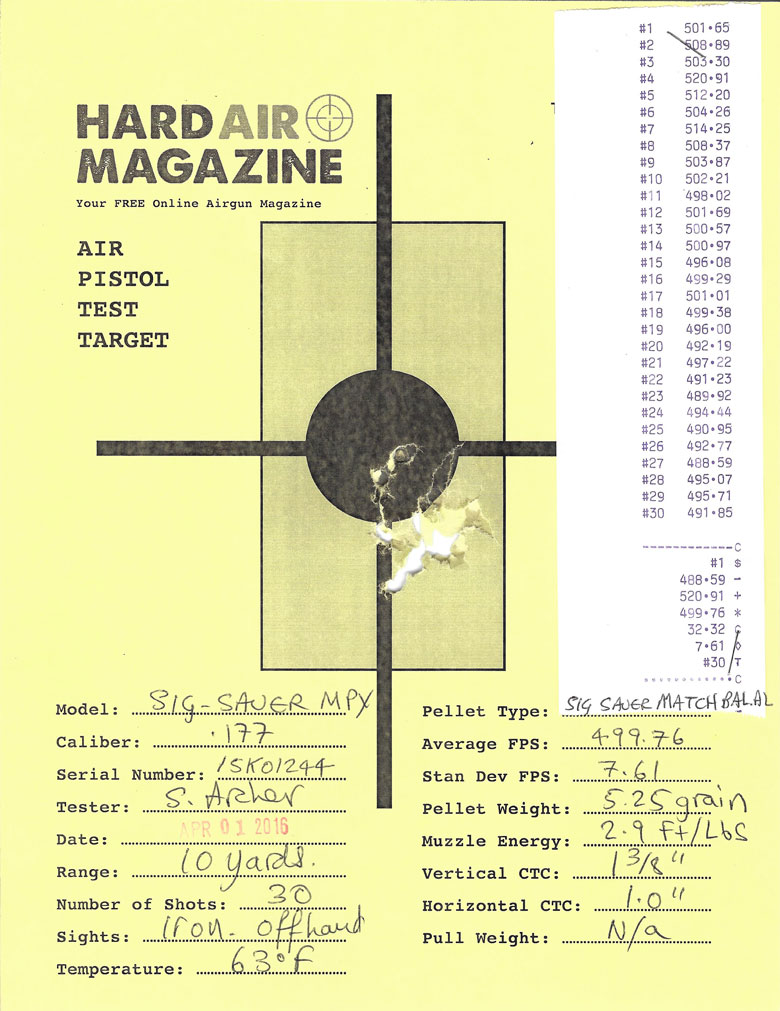 I was surprised to find that muzzle velocity was remarkably consistent with a Standard Deviation of just 7.61 fps, even though the ambient temperature was just 63 degrees F in the indoor range and I had been firing fast. This is great performance from any CO2-powered airgun!

And yes, the SIG SAUER Match Ballistic Alloy pellets are expensive. But we can see why.

Was this precision shooting? No. Was this “traditional” air rifle shooting? No. Did we achieve the magic 1,000 fps? No. Could we hunt with this gun? No.

Was it an absolute blast? You bet! It was a hoot to shoot. I had a smile from ear to ear!!! Yes, old Ken would have loved this SIG SAUER MPX airgun too.

There’s very few other airguns that can match this performance and combine it with the realistic feel, handing and looks of a powder-burning firearm.

So now you know why I think the SIG SAUER MPX airgun is the perfect plinker! 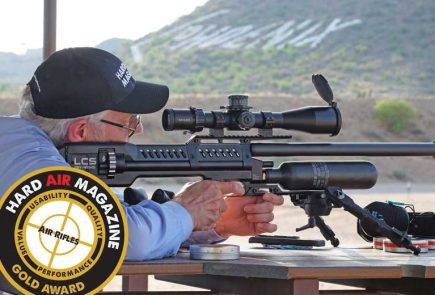