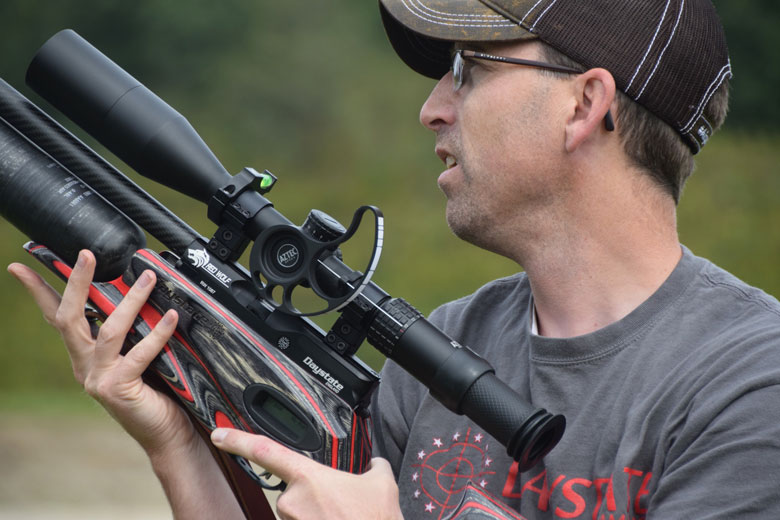 In this first post in HAM, Chad Kentner reviews his Daystate Red Wolf PCP air rifle. Take it away Chad…

The Daystate Red Wolf wraps up all of the British company’s cutting-edge technology into one beautiful package.

Over the past few months I’ve had the pleasure of owning and shooting this rifle both in competitions and informal plinking with friends. The consistency and accuracy that I have experienced has truly helped to build my shooting confidence.

As an example, Last year I went from shooting a best score of 23/60 and 40/60 on a two day event at the Pyramyd Air Cup, to now consistently shooting around 50/60 in several local events and at the Crosman All American Field Target Championships and placing 9th overall.

I also shot a .22 caliber Daystate Red Wolf at Extreme Benchrest this year and was happy with my first effort there.

BTW. As you can see, the gun I shot at Extreme Benchrest had no shroud… 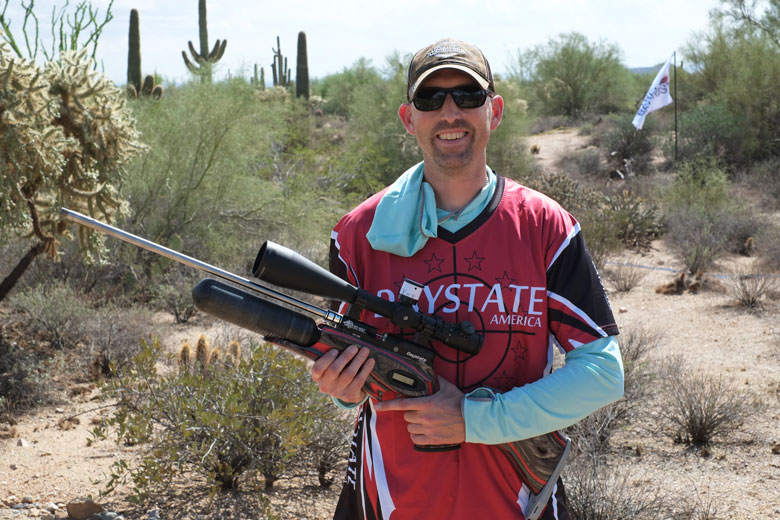 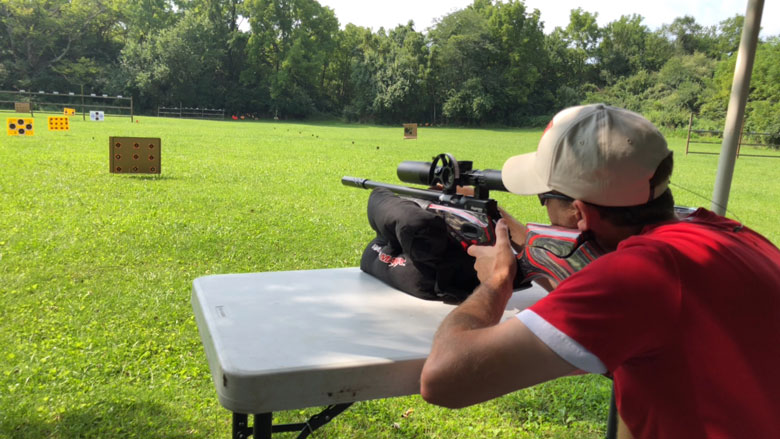 I have been using JSB 10.3 grain pellets that have been slightly lubed. Wanting to really stretch the rifle and it’s capabilities, I choose to go beyond the standard 5 shot groups and up the challenge to 10 shot groups. Out to 30 yards it is a laser, producing almost single hole groups with 10 shots using shooting bags and a folding table in an open field!

At 50 yards I was able to produce ¾ inch groups with 10 shots. With both wind playing a factor as well as my stability shooting off a makeshift bench, I feel confident in saying that my groups at this distance have the potential to be much smaller given better circumstances. 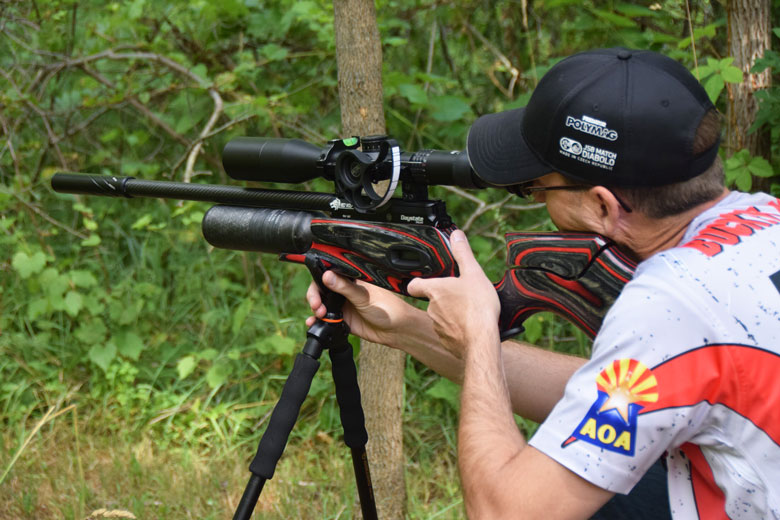 Since we know that the Daystate Red Wolf can perform as advertised, let us take a closer look at the rifle itself.

It has a beautiful pistol grip laminate stock while –  for the traditionalist – it is also available in walnut. There is  a true carbon fiber shroud together with a factory attached moderator that makes this absolutely whisper quiet.

The stock is adjustable with the ability to raise and lower the cheek rest, a two way adjustable butt pad for the perfect fit, an adjustable trigger blade and two stage trigger. At the bottom of the grip you will find a small trap door for battery removal which is needed to charging and or replacement at some point in the future.

The heart of the Daystate Red Wolf is the Map Compensated Technology or MCT electronic system. As a traditionalist, I was both leery and curious as to how this would impact my shooting experience. All that I can say is that it is just as enjoyable if not more enjoyable than any mechanical system I have tried yet.

The MTC system uses solenoid powered valve to regulate shot to shot consistency. This prevents regulator creep and provides a huge number of shots you get on a fill. Also as a result of this electronic system, it has become extremely easy to cock the new sidelever. 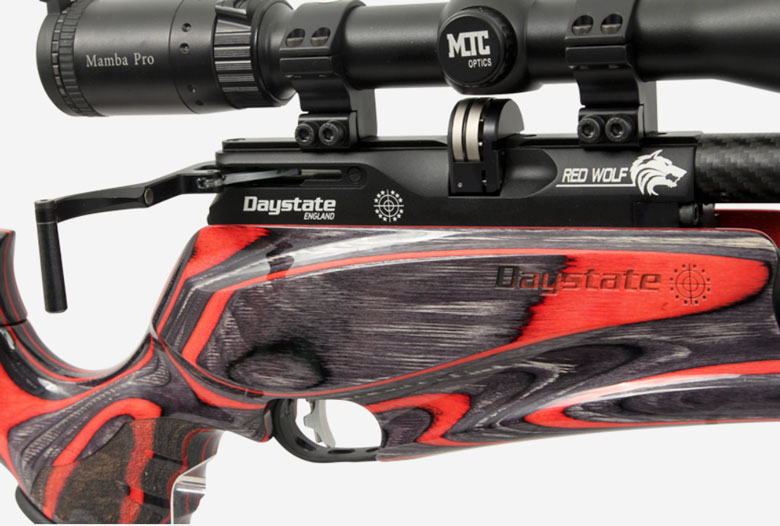 This is a result of not having to pull a hammer back against the spring to cock the rifle. Remember we are talking about just reseating a electronic solenoid to shoot your next round!

One of my favorite features is the magazine and how the electronics prevent you from firing once you have expended all your shots, which prevents the unacceptable misfire. 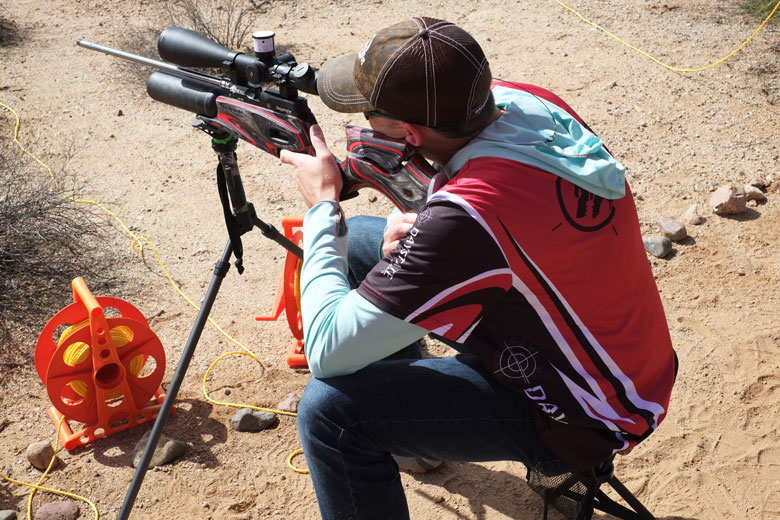 The battery that gives the Daystate Red Wolf electronics life has been a bit of a debated topic among owners and onlookers reading online forums. I have seen this portion of the rifle called “cheap” and others have even suggested that this was “overlooked” by Daystate and should be improved. Let’s take a quick look at some of these possible concerns and I’ll explain my thoughts as well.

The first of many of the complaints I have seen state that there should be an external charging port so you do not have to remove your battery for charging. I understand that there is a bit of an inconvenience factor here but let’s also look at it from a safety perspective…

Lithium Ion batteries do go bad and when they do, they can become a explosive fire hazard if not handled correctly. By having to remove the battery, you are now also quickly able to examine the battery for possible replacement. The number one telltale sign of failure is that the battery itself will begin to swell.

Another thing to keep in mind is that you get thousands of shots off a single charge so you don’t need to charge as often as you would have with old style of batteries.

Some have said that the battery is a cheap foreign made product. My first response to this is does it work? The obvious answer is “yes” and it works well too! Secondly and much more importantly in my mind, is that this means it can be easily replaced by various retailers down the road and it won’t be prohibitively expensive to do so. 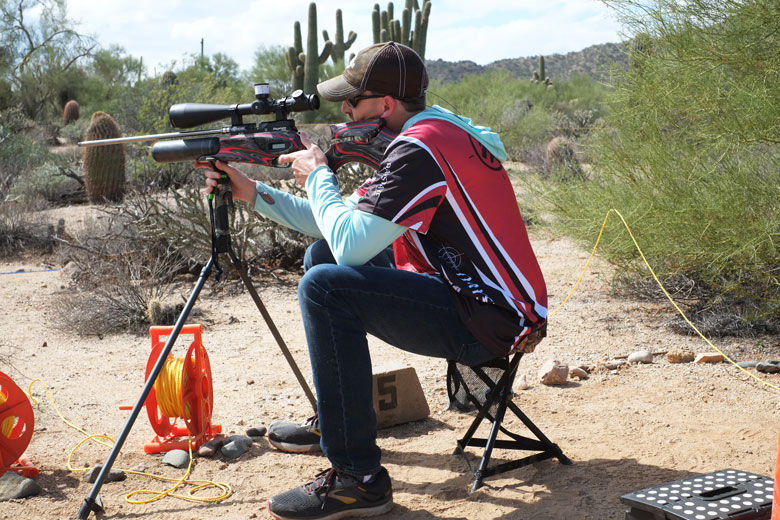 Something else that I have read is the concern that the battery must be removed before removing the stock. Although this is a true statement, I would argue it is like saying you have to remove a screw to take off the stock. It is just the nature of the beast and a moot point. Especially since you only need to remove a single screw and the battery which takes all of a minute to do.

Now that I have addressed a few of my feelings on the general complaints, I do have a few areas that could be improved on the Daystate Red Wolf.

First on my list are the wires from the MCT electronics to the battery plug. They appear rather small and potentially fragile, unlike the wires coming off the battery itself. Only time will tell if this is actually an issue and from what I have seen inside the electronics they could be easily replaced if damaged. That’s why I’m thankful for Daystate’s robust 3 year warranty.

Another area to take a second look into is the battery charger. It comes with a plug for the European Market and needs an adapter for a US outlet to work. Mine did at least come with the adapter! 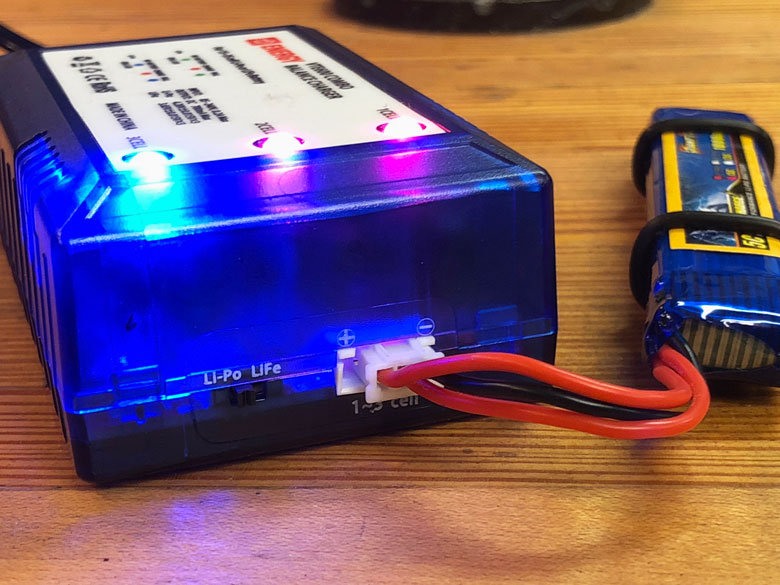 The charging port also is a bit confusing with a four prong receiving port where the battery only has a three prong plug. Duh!!!

Knowing that the battery is made of two cells, you can quickly determine that the plug goes all the way to the right so that the lights for cell one and cell two light up as charging. However for those who are not familiar with these chargers, this could easily become confusing. Not to mention the directions don’t explicitly explain how this works.

All in all as both an owner and reviewer, the Daystate Red Wolf is as near to perfection as I have seen an airgun get and would highly recommend that if you get a chance to shoot one that you should.

Even better yet, place an order and own the pride of the Daystate pack and see what all the fuss is about!