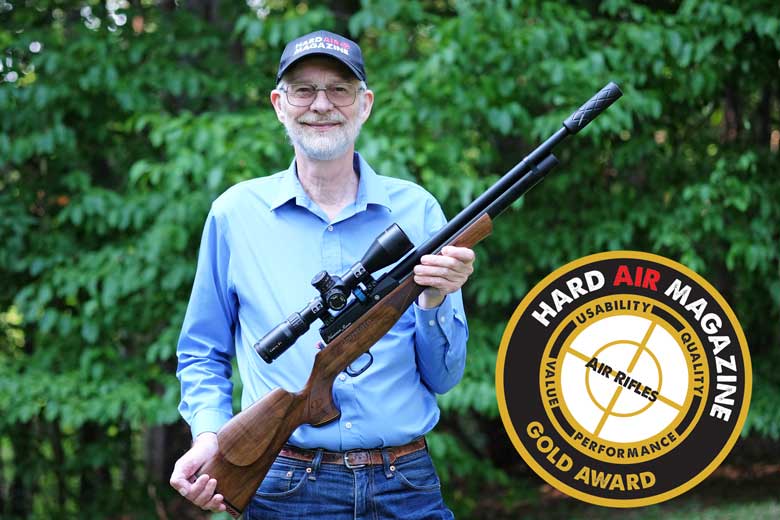 The Daystate Huntsman Revere is beautiful and accurate. It has a sublime trigger and just feels so good to shoot. It's not the most powerful air rifle out there, nor does it offer the most shots per fill. But it offers enough power and shots, combined with a TON of style and a huge amount of enjoyment.

There's a reason that the Huntsman is Daystate's long-running best seller and this is the best model to date. It's a clear HAM Gold Award winner!

The Daystate Huntsman Revere is the latest iteration of the company’s longest-running and most successful air rifle. Compared to previous “Huntsmen”, the Revere introduces a slick side lever cocking system. There’s also a Huma regulator included in the tested gun, together the new Daystate “gate loading” magazine and a number of other refinements..

Daystate air rifles have never been cheap. However at $1,299 base price, the Huntsman Revere offers superlative quality and accuracy. The Daystate Huntsman Revere tested by HAM was in left-handed configuration (an additional $100). Given the lack of “true” left-handed air rifles on the market, this is not an unreasonable premium, we feel.

In addition, the test gun was supplied with the very effective 0dB moderator pre-installed by Airguns of Arizona (an additional $69).

While this test refers specifically to the .22 caliber, left-handed model. Obviously much of the review is also applicable to the other calibers the Revere is available in – .177 and .25 – as well as the right-handed version.

So the value question???

Of course, well North of a Grand is a significant spend for many people for an air rifle. But – if you can afford it – there’s no doubting the value in quality, style, accuracy and – yes – beauty that this air rifle offers.

The Daystate Huntsman Revere tested by HAM generated Muzzle Energies of between 23.50 and 28.61 Ft/Lbs, depending on the pellet used. As is expected, the heavier pellets produced the most energy.

Muzzle Velocity peaked at 1,044.61 FPS under test, using ultra-light 9.7 Grain Gamo non-lead pellets. The maximum with lead pellets was 960.73, with 11.9 Grain RWS Hobbys. These numbers are quoted “for the record”.

Of course, most buyers for the Revere will be interested in using mid-weight and heavy domed lead pellets. In this case, Muzzle Velocities range between 712.35 and 920.81 FPS. As would be expected, this gives outstanding accuracy with most of the pellets in this weight range – excepting the H&N Field Target Trophies.

At 25 Yards, the 10-shot group was pretty-well a “one holer”. That’s outstanding considering the shooter – me –  the 10-shot string (5-shot strings are ALWAYS smaller) and unsorted pellets. Oh yes, also I’m a right-hander and this was the first time I’ve ever fired a dedicated left-handed gun! 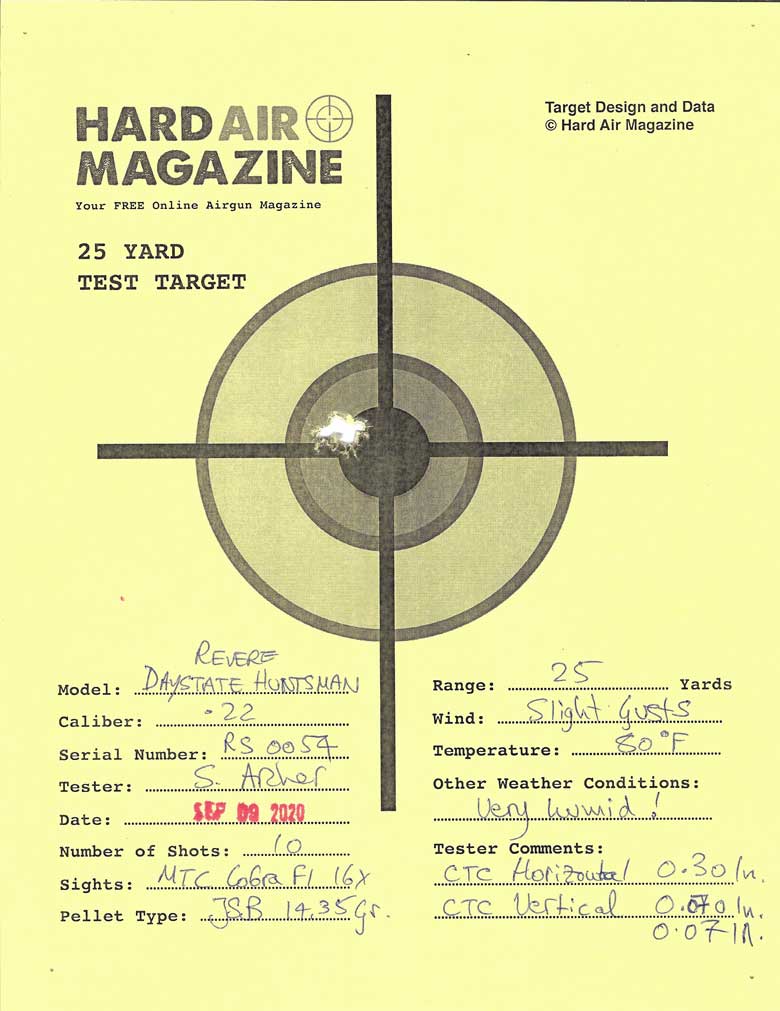 And all of this from such a stylish-looking package! 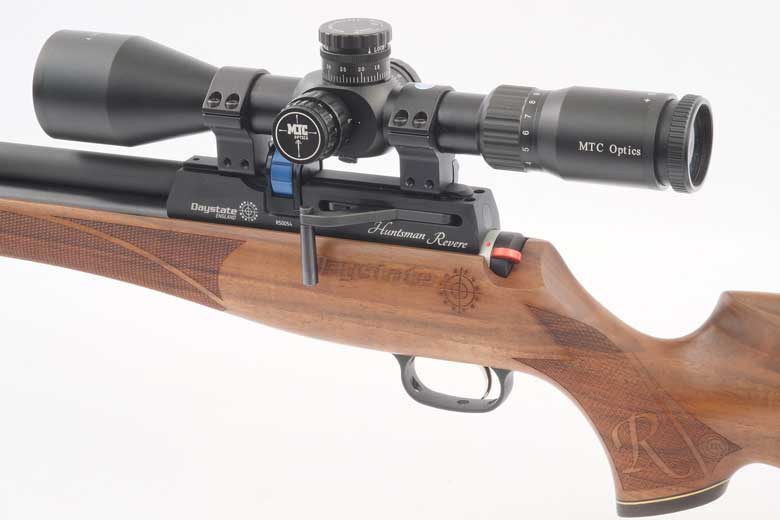 The trigger of the Daystate Huntsman Revere air rifle tested by HAM is extremely good. HAM Tester Doug Rogers described it as a “very nice trigger” in his test notes. In case you didn’t know, Doug’s a master of understatement!

At an average pull weight of just below 1 Lb 1 Oz, this is a very light trigger. It’s clearly more set-up for target shooting than hunting, however it’s easy to manage and doesn’t have that “hair trigger” feel that you might expect from the raw pull weight data.

The first stage is very light and there’s a clearly defined “step” where the second stage engages. Then there’s just a short, gentle pull until the trigger breaks “like glass” with a predictable, consistent feel.

This is a trigger to be savored when shooting. As with other Daystate triggers, it’s adjustable for pull length and weight, but the HAM team cannot image anyone needing to change the factory settings based on the sample tested by us. 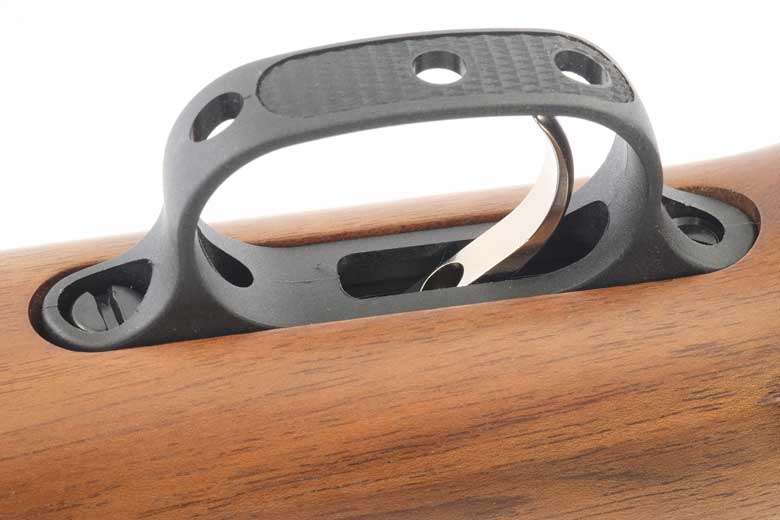 Of course, the side lever action is one of the critical new features of the Revere, compared to previous Huntsman versions. When HAM reviewed the Huntsman Regal XL back in 2015, we felt the bolt action was “fairly stout and needs to be undertaken with some determination”.

Wow, what a revelation with the side lever action of the Daystate Huntsman Revere! 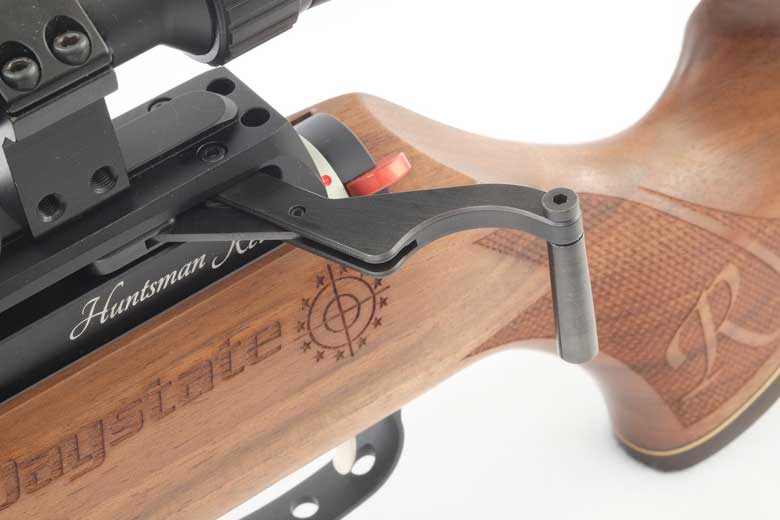 Now we have buttery-smooth sidelever cocking…

There’s just a small amount of effort required to compress the hammer spring during the second stage of the cocking lever’s travel. But that’s it. Both the “first stage” travel and the return – pushing the pellet out of the magazine and into battery – are beautifully smooth and effortless. To the HAM Team, this is a great improvement on the bolt action of previous models.

As you would expect from this manufacturer, there are few hard claims made for the Daystate Huntsman Revere.

As can be seen from the shootdown graph below, the Revere tested by HAM achieved 43 consistent shots with 14.66 Grain Daystate Rangemaster Kaiser pellets. These had an average Muzzle Energy of 26.48 Ft/Lbs.

Of course, higher Muzzle energy is obtained with heavier pellets – for example we achieved 28.61 Ft/Lbs with JSB Jumbo Monster pellets. Shooting heavier pellets would cause the shot count to fall slightly, too.

Note that the fill pressure on Daystate air rifles is indicated by the little “button” shown in the photograph below. “SWP 250” indicates a Standard Working Pressure of 250 Bar (3,625 PSI). 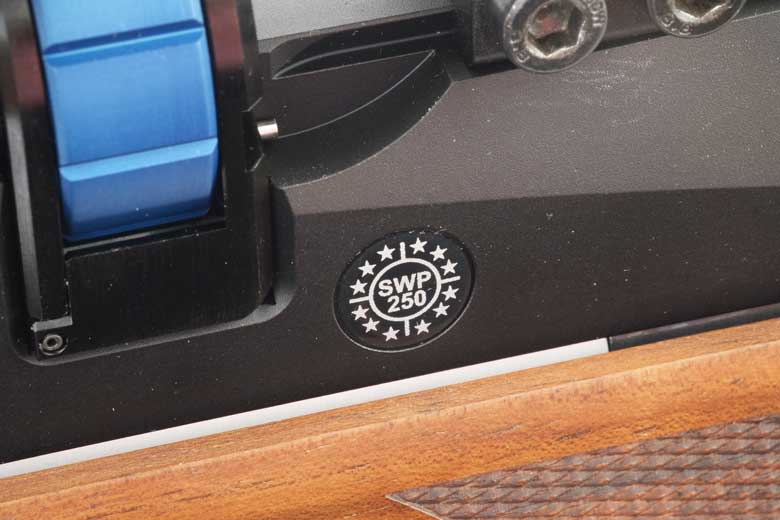 Consistency was a hallmark of the Daystate Huntsman Revere tested by HAM.

Not only did it display very consistent levels of accuracy across a wide range of pellets, but the Standard Deviation was very low, too. In fact the average Standard Deviation across the complete range of HAM test pellets was just 3.08 FPS. That’s the lowest figure we have ever achieved on test! 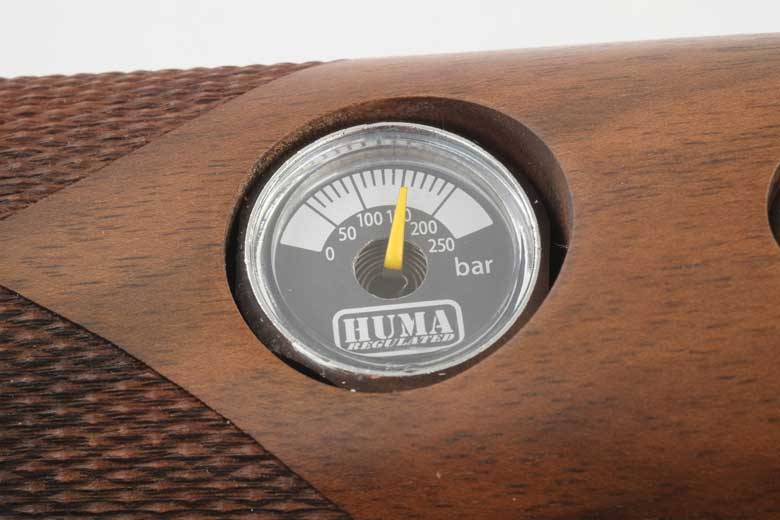 Without doubt, the standard Huma regulator plays a major part in this shot-to-shot consistency. The Revere is clearly very well set-up.

As the shot count graph below shows, the Daystate Huntsman Revere on test achieved about 43 consistent shots from one 25 Bar (3,625 PSI) fill of High Pressure Air. From that point, HPA pressure in the tube fell below the regulator set pressure and the FPS fell away – as expected. 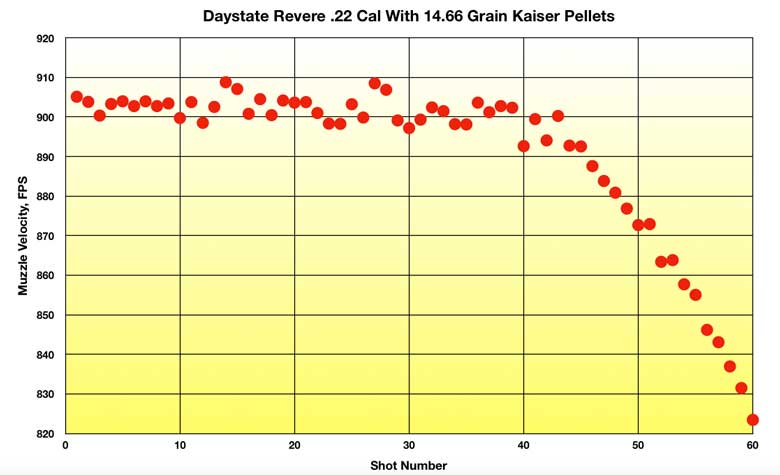 Another outstanding aspect of consistency was the trigger pull weight. The maximum recorded by HAM Tester Doug Rogers was 1 Lb 1.1 Oz. The minimum was 0 Lb 15.9 Oz. All measurements were obtained using our standard electronic trigger pull gauge.

With an average of just 1 Lb 0.7 Oz, that’s one consistent trigger!

The Daystate Huntsman Revere has a shrouded barrel for reduced shooting report. In addition, the gun tested by HAM was supplied fitted with a compact, pre-installed oDB moderator. This was an additional $69.00 option.

In combination, the overall noise level when shooting was very quiet. Definitely backyard-friendly! 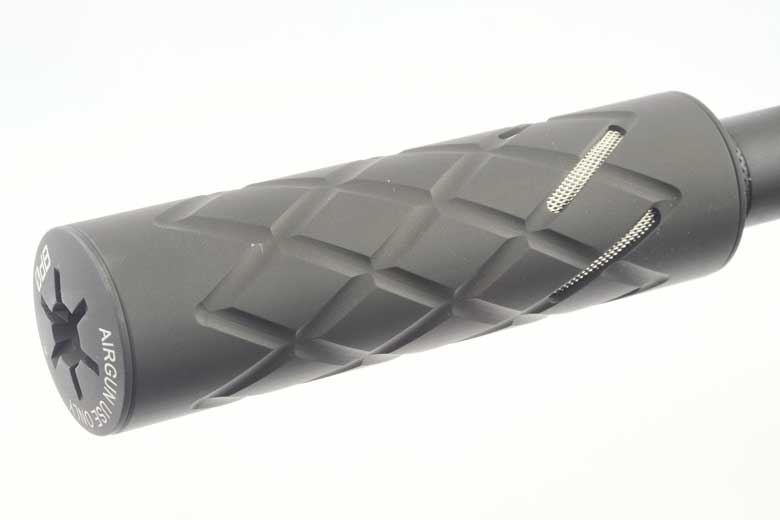 As is expected with high-end PCP air rifles, the Daystate Huntsman Revere is not fitted with iron sights.

So, for this test review, HAM attached a MTC Optics 4-16 x 50 Cobra F1 riflescope. This first focal plane optic was mounted with high Sportsmatch rings so as to clear the magazine. Note that clearance was tight for the HAM shooters’ eye relief requirements. Our suggestion is that you mount the scope with the magazine in place to ensure you have clearance. 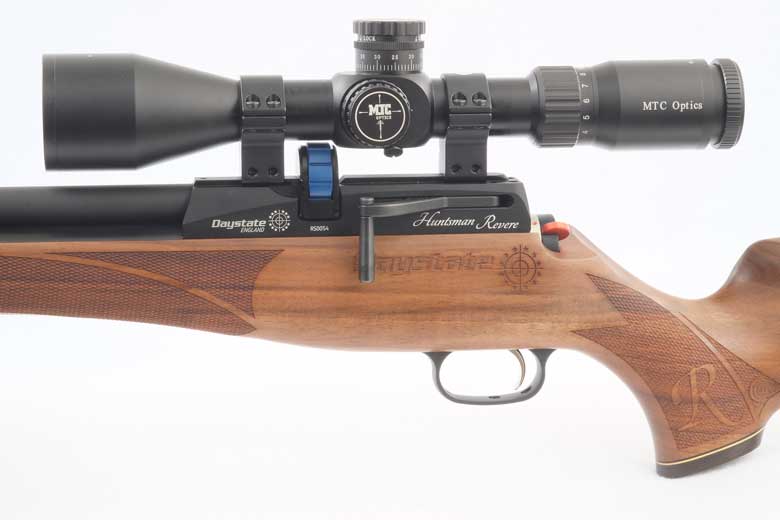 The stock design allows for a “thumb up” hold, if required… 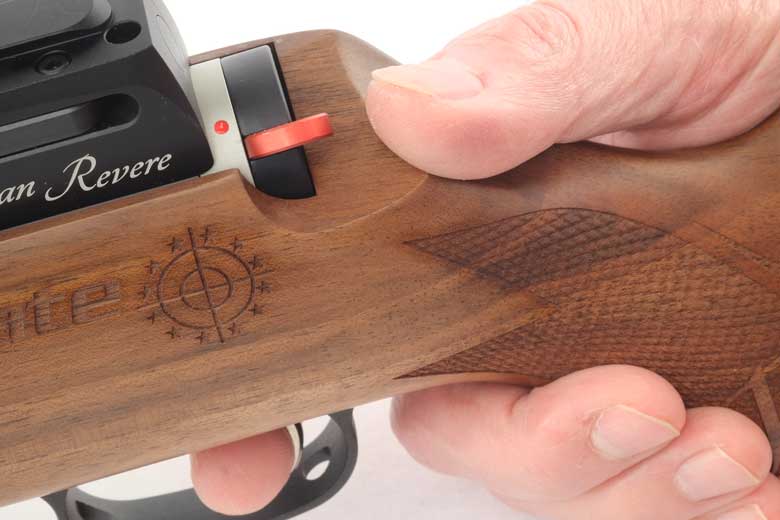 … while there’s a considerable roll to the comb that provided an excellent cheek weld. This is a benefit that’s not achievable with a typical ambidextrous stock.

One downside to this beautiful stock is that there is no adjustability: it’s a fixed, one piece affair. However, the HAM testers found it naturally “right” and comfortable to shoot. At this price, we’d like to see an adjustable comb and buttpad, even though we’re not sure that we’d ever actually use them… 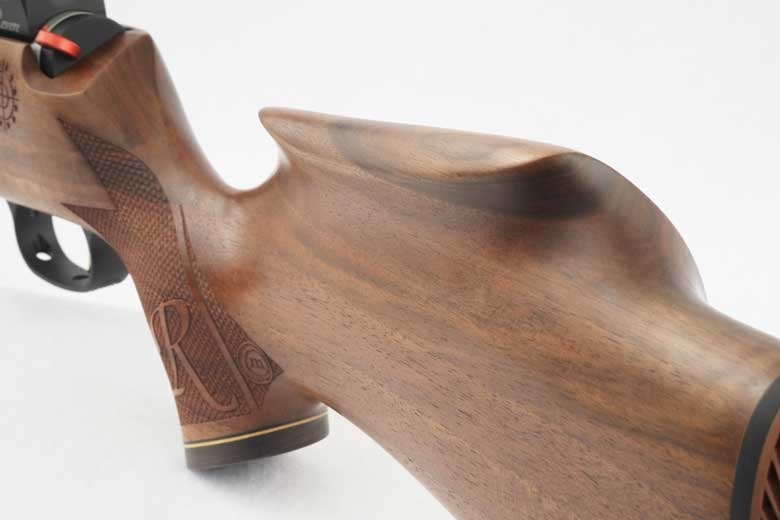 The manual safety – that red paddle seen in the photographs above – is also easy to operate. It’s in a convenient location and clicked reassuringly into and out of engagement.

The Daystate Huntsman Revere is shipped with the new style Daystate “gate loading” magazine. HAM brought you first details of this some time ago. We like the easy loading capabilities of this new magazine. It snaps decisively into place, courtesy of the magnetic catch system.

This magazine also performed faultlessly in HAM testing. However, there could still be some improvements…

Although it is possible to see the rear of loaded pellets through the gate cutouts, this new Daystate magazine provides no simple, clear indication of the number of pellets remaining. If it were our personal property, we’d mark the rotor with a dab of paint to indicate – at least – when there’s just one pellet remaining.

The magazine also has no block to prevent firing when all pellets are expended. So the Revere can be fired on an empty chamber. This is something the HAM Team would like to see improved, even if there’s no way to prevent unintentional double-feeding when loading the gun.

Needless to say, the Daystate Huntsman Revere is a beautiful air rifle! The design is sublime. It’s traditional yet stylish.

The walnut stock of the test gun was nicely figured, with exquisite checkering 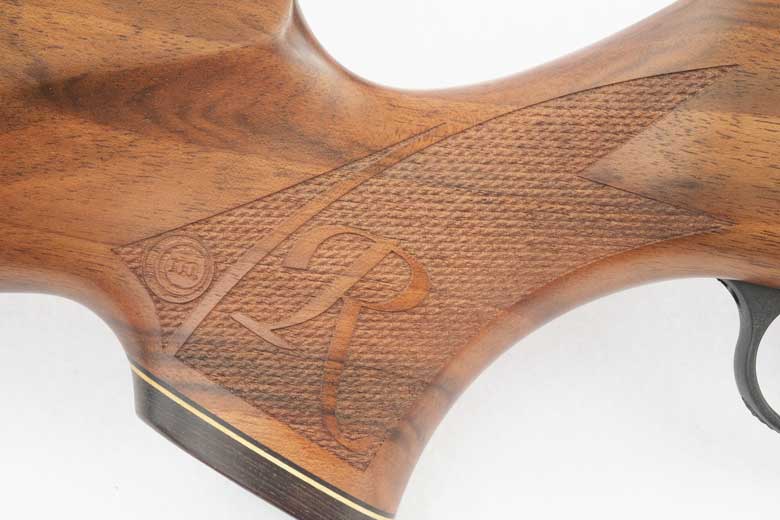 The finish of the metal parts was likewise flawless. As Doug Rogers commented in his test notes: “It’s a Daystate – need I say more!”

In the USA, the Daystate Huntsman Revere is available from Airguns of Arizona and Precision Airgun Distribution dealers. So it’s not hard to find through specialist airgun channels. However there’s about no chance of it appearing in the aisles of a typical big box sporting goods store. 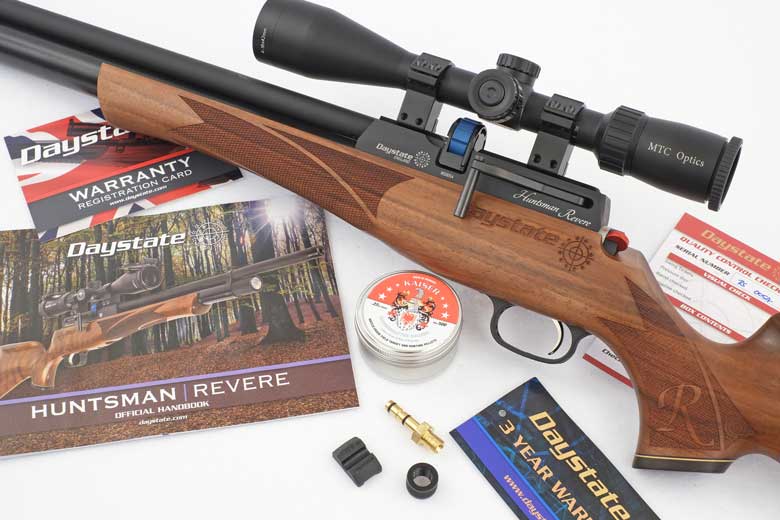 As you can see from the photograph above, the Revere is supplied with copious (English only) documentation, together with one magazine, a single shot tray and a fill probe. Note that you’ll need to source an adapter if your air supply outputs to a female 1/8-Inch quick disconnect, as most do.

The fill port is accessed under the rotating cover near the front of the HPA tube, as we can see below. 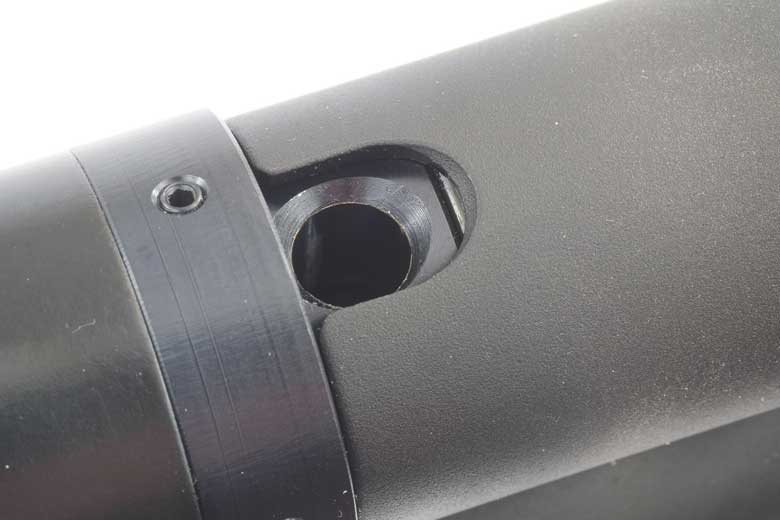 And now for the one thing that the HAM Team really doesn’t like about the Daystate Huntsman Revere. The pressure gauge is set in the end of the HPA tube, requiring the user to point the muzzle at his or her face to read it.

Yes, you could argue that the Revere is far from the only air rifle with this gauge position. Yes, you could argue that it’s possible to use the regulator pressure gauge in the underside of the stock to monitor the regulated air pressure – which is, after all, what really matters. But there’s obvious safety concerns with ANY pressure gauge on ANY PCP air rifle in this position. 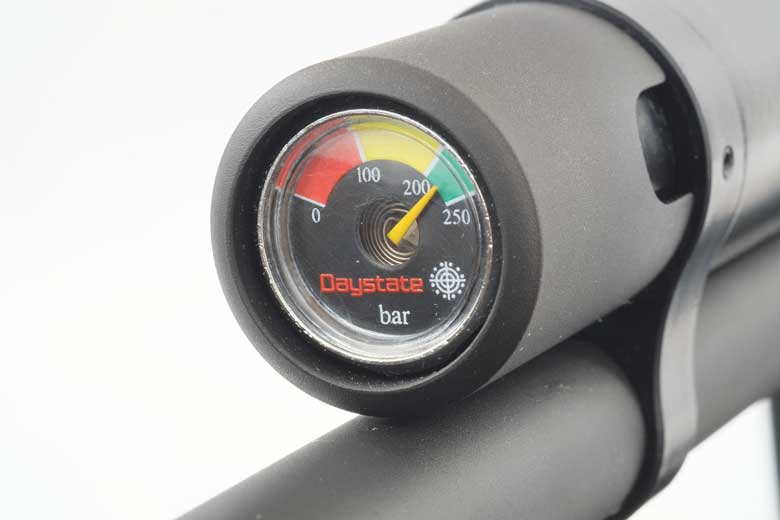 Finally, the US warranty has now increased from 3-years to 5 years, since last we reviewed a Huntsman. That’s more good news and even better value for the Revere! 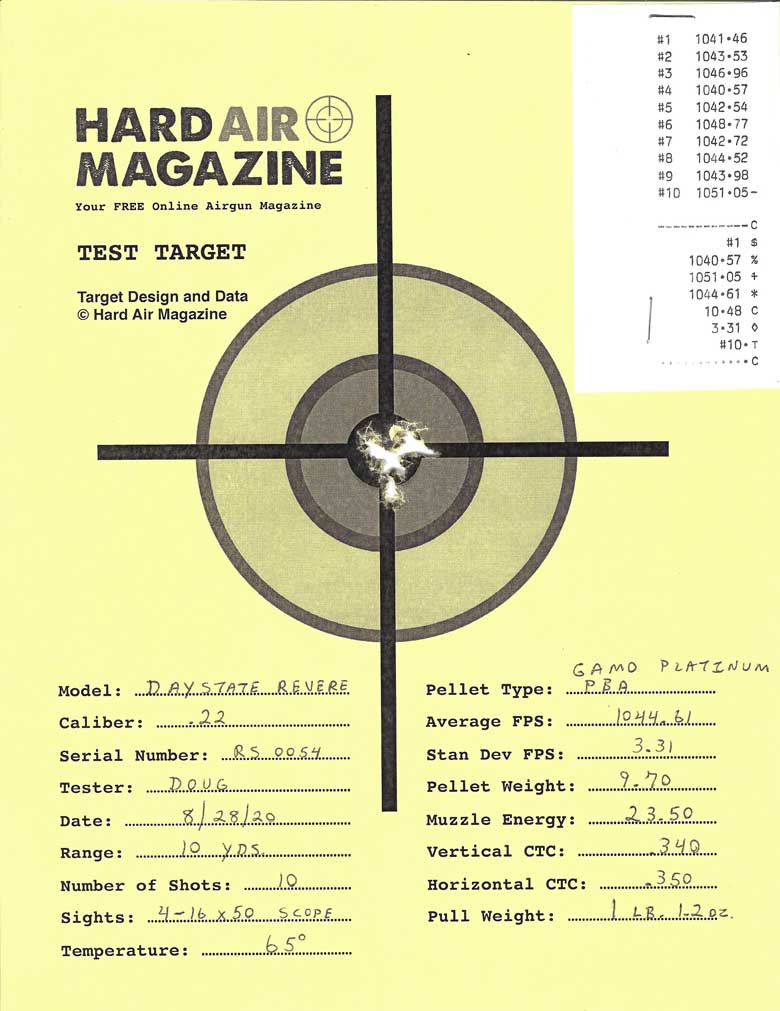 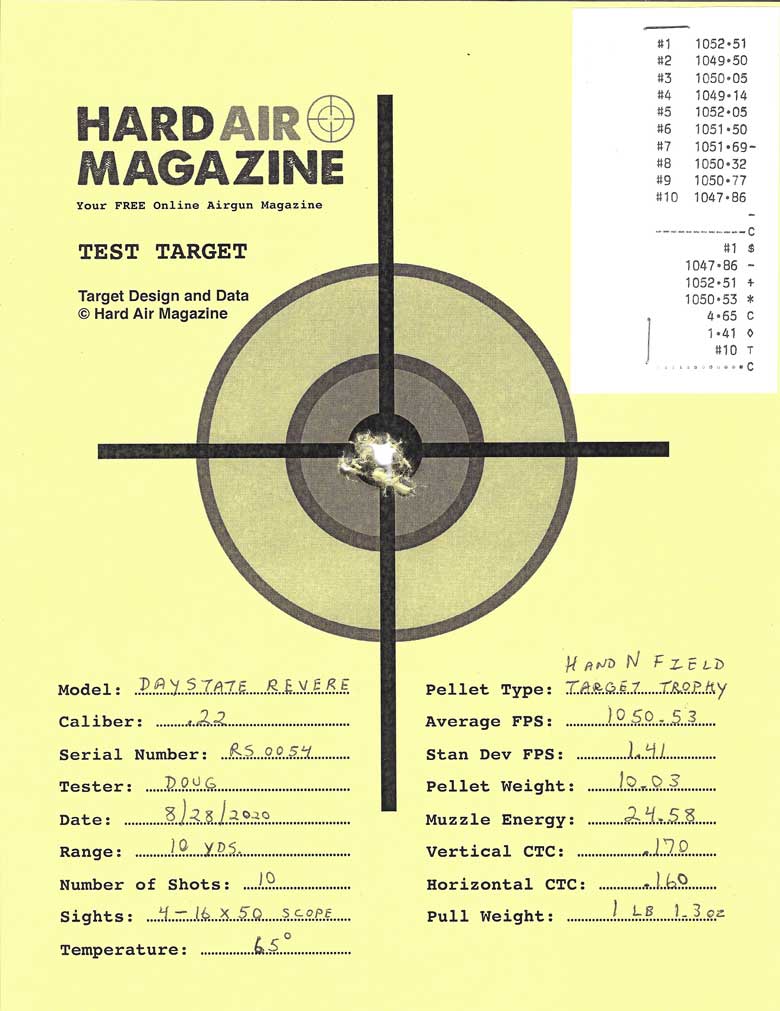 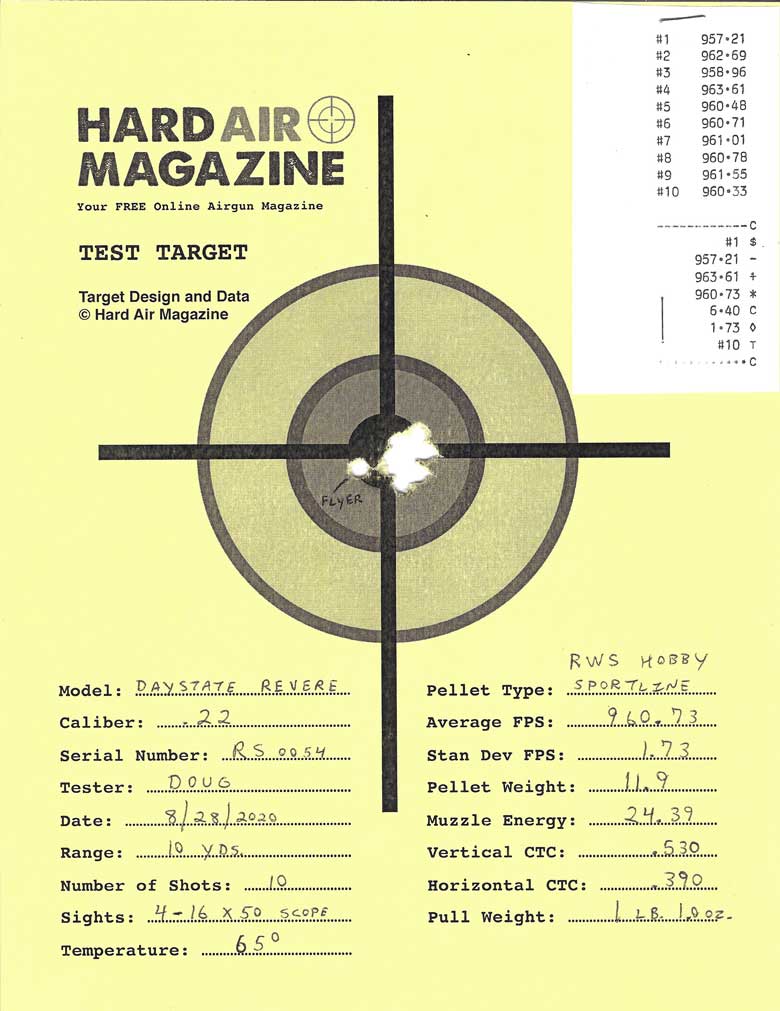 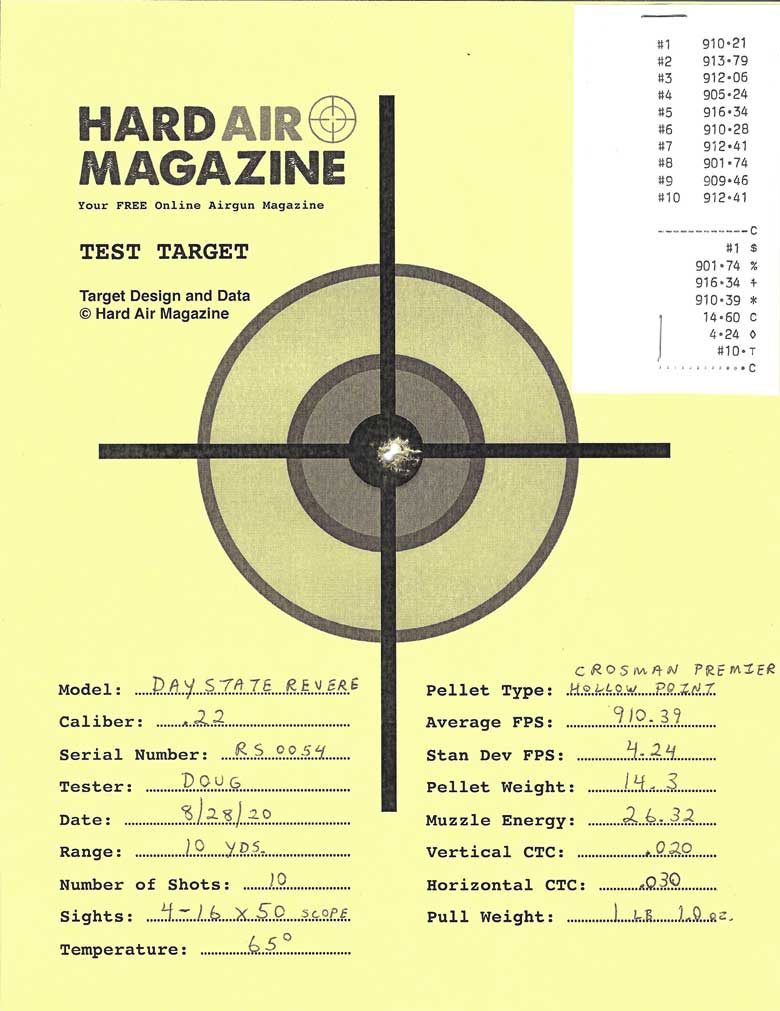 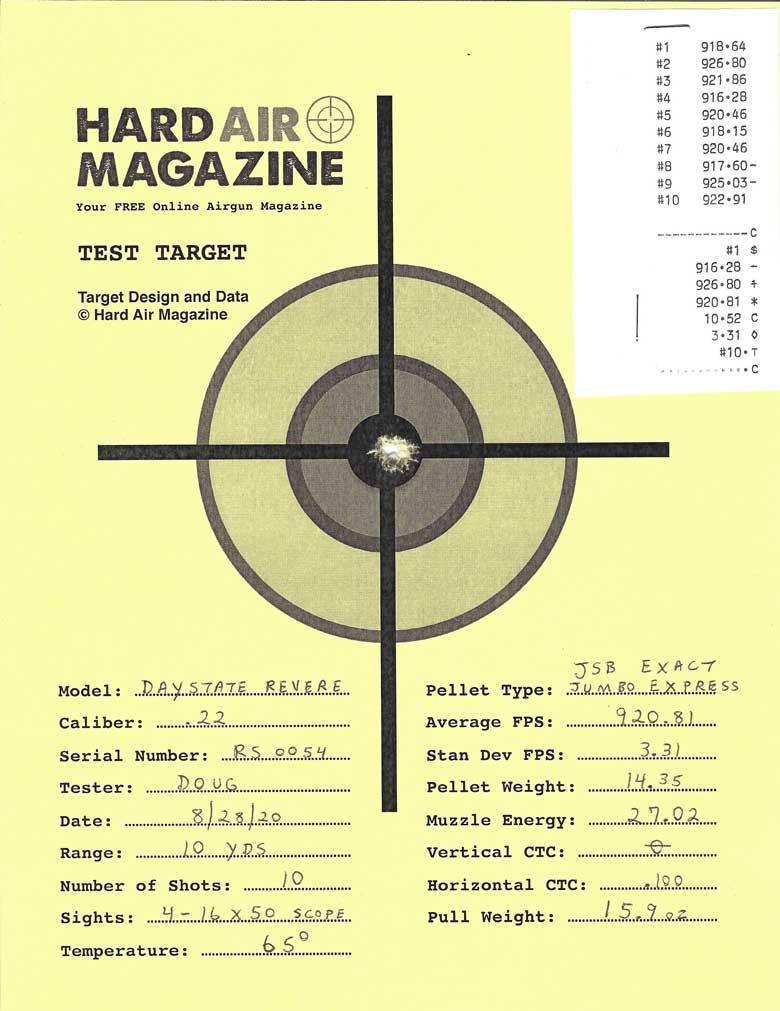 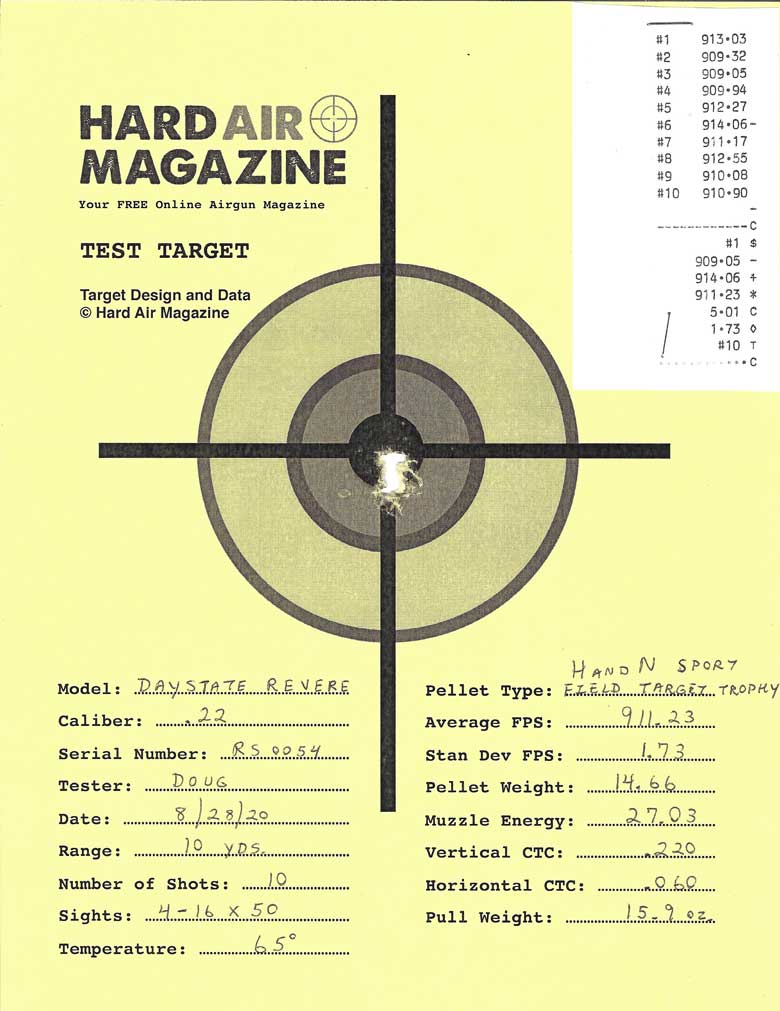 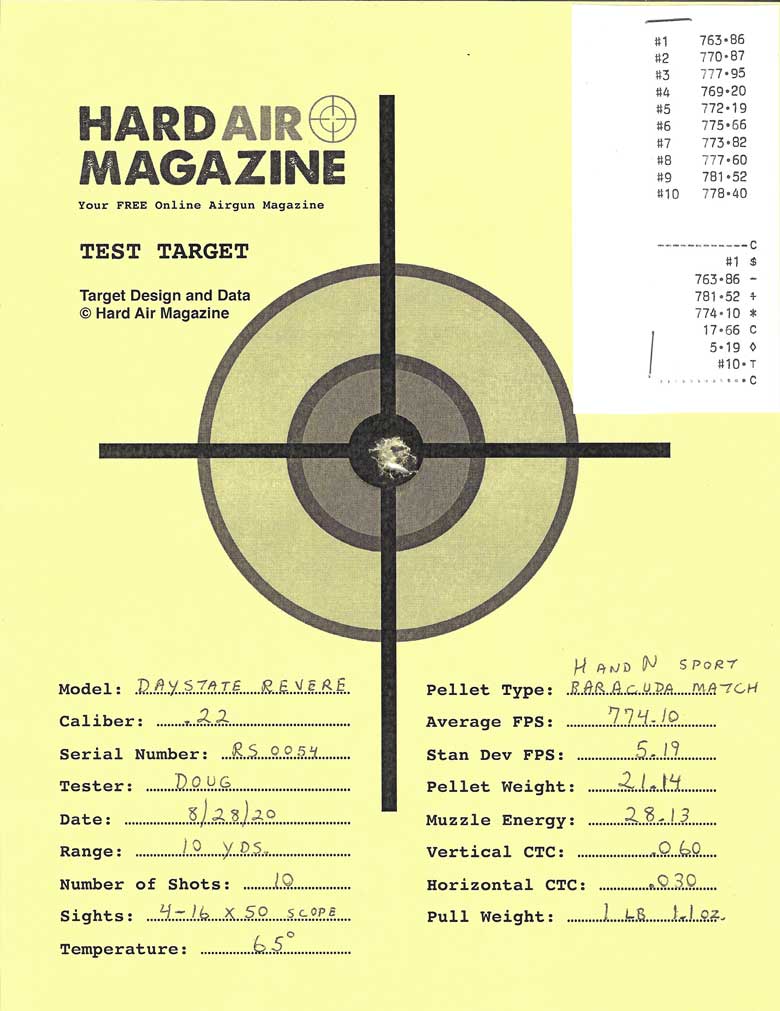 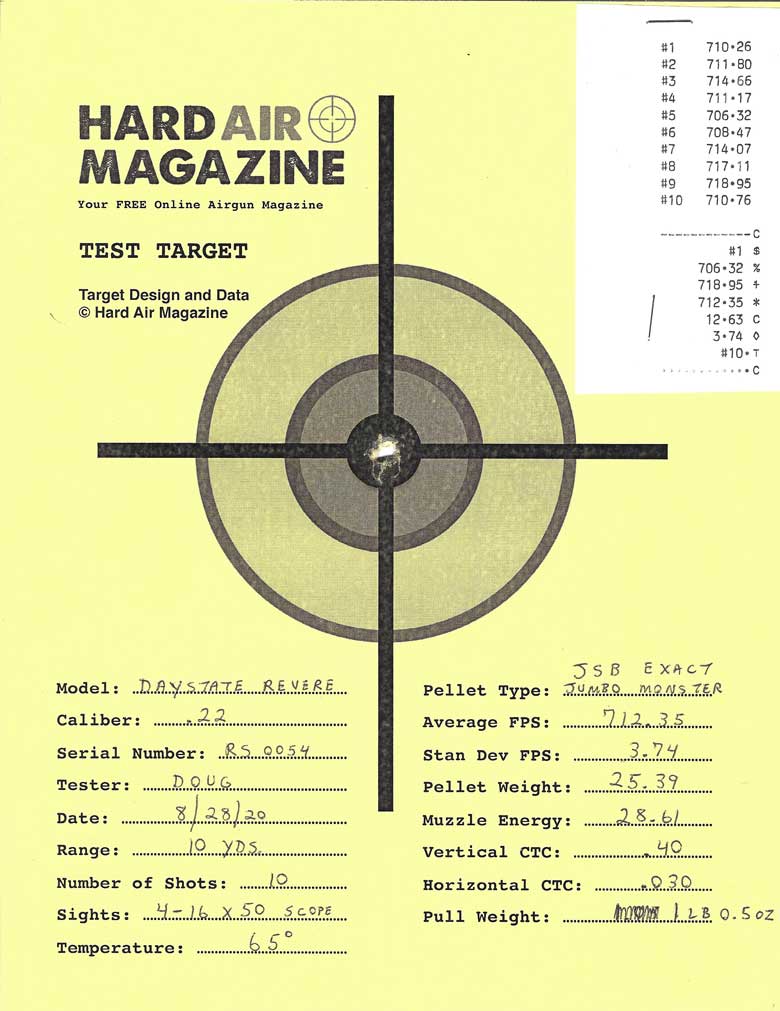