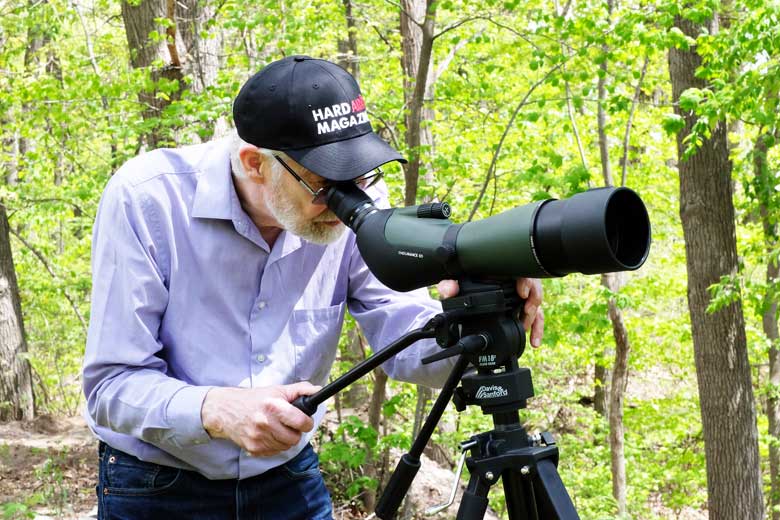 As we shoot air rifles at ever-increasing distances, it’s really useful to see exactly where the shot hit downrange! That makes a spotting scope an essential item of equipment. So today we’re looking at a Hawke spotting scope – the Endurance ED 25-75 x 85 model.

Yes, of course we have riflescopes attached to our airguns – some of them can have very high magnifications as much as 50 x – but spotting scopes give additional capabilities for pure observation of events as they happen downrange. 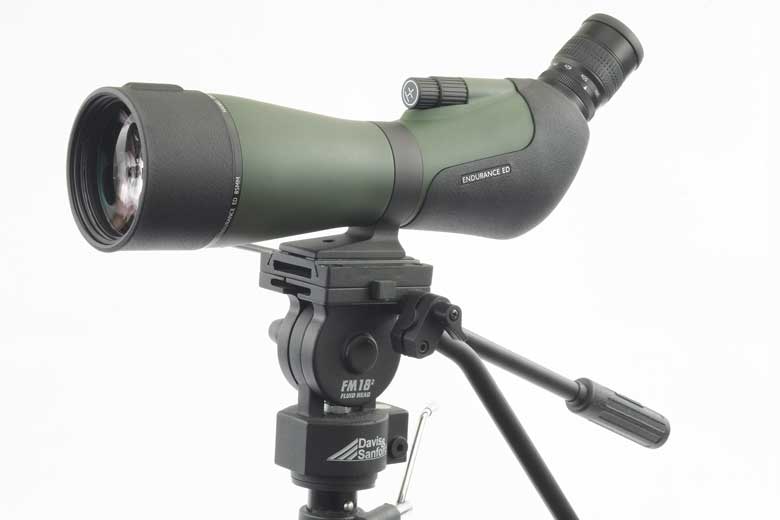 Spotting scopes generally have larger objective lenses, higher magnifications and larger exit pupil than riflescopes. They are also larger and heavier than scopes. Furthermore, they’re not mounted on the rifle. A riflescope needs to incorporate a reticle and turrets: it’s an optical instrument designed to help you aim the gun with precision – a spotting scope does not.

These are all significant differences and explain why a spotting scope is a completely different animal from a riflescope. Even if you have an outstanding scope mounted to your air rifle, you can still find huge benefits from using a high quality spotting scope as you shoot.

Of course spotting scopes can be used for birdwatching, nature observation and similar tasks. But we’re interested in how they are used for the specific purpose of observing shot placement downrange. 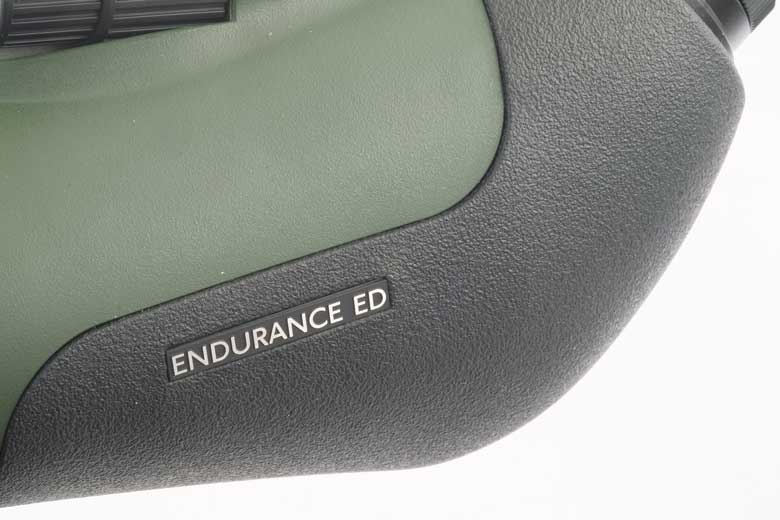 The Endurance ED 25-75 x 85 is a high end Hawke spotting scope. We expected quality performance and were not disappointed…

In the sample tested by HAM, we were able to resolve the individual lines of the “6 block” indicated by the arrow of the USAAF Test Target at 60 Yards distance on 75 x magnification in bright shade. The lines were clearly defined with sharp black and white edges. Wow! 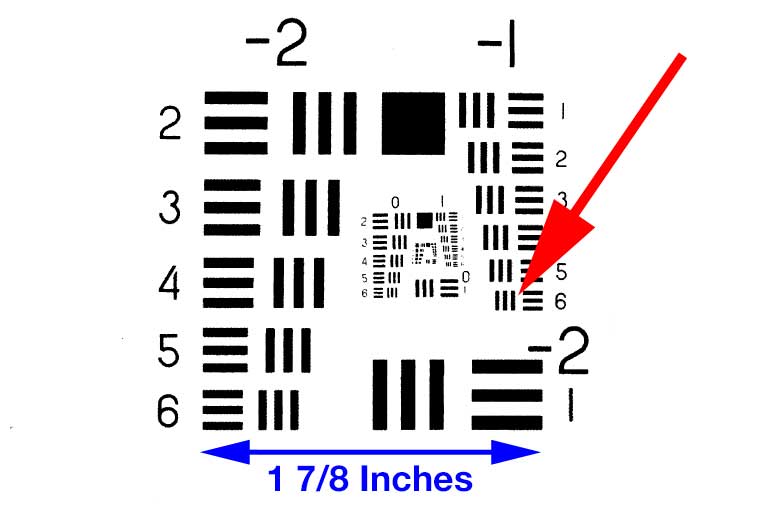 This performance made it incredibly easy to observe .22 caliber – and even .177 caliber  – hits on a paper target at that range.

Hawke says that this Endurance spotting scope is constructed with ED (Extra low Dispersion) glass. This is said to reduce the potential for chromatic aberration, reduce color fringing and allow improved image clarity and crispness. From our observations, that would be correct!

This level of magnification has to be experienced to be believed. The specifications for the Hawke Endurance ED 25-75 x 85 spotting scope call for a Field of View of between 90 and 46 Ft 6 Inches at 1,000 Yards, depending on magnification.

Bringing that down to more typical airgun ranges, the Field of View is as follows…

The Endurance ED 25-75 x 85 is a large, heavy piece of equipment. It weighs around 4 Lbs and is 17 Inches long with lens hood and eyecup closed. That means that it’s essential to mount this Hawke spotting scope on a tripod – an extra-cost item. Make that a substantial tripod!

In fact, the tripod is such an important aspect of using a spotting scope that we’ll be making a HAM post specifically on what to look for when you choose a tripod for your spotting scope.

The Hawke Endurance ED has a tripod mounting plate built-in. This actually has two threaded holes for tripod locking screw attachment. You use the one that provides the best point of balance for you.

Now it’s possible to rotate the spotting scope (around its axis) to find the most convenient position for observing through the angled eyepiece. There’s a clamping screw to keep it there. 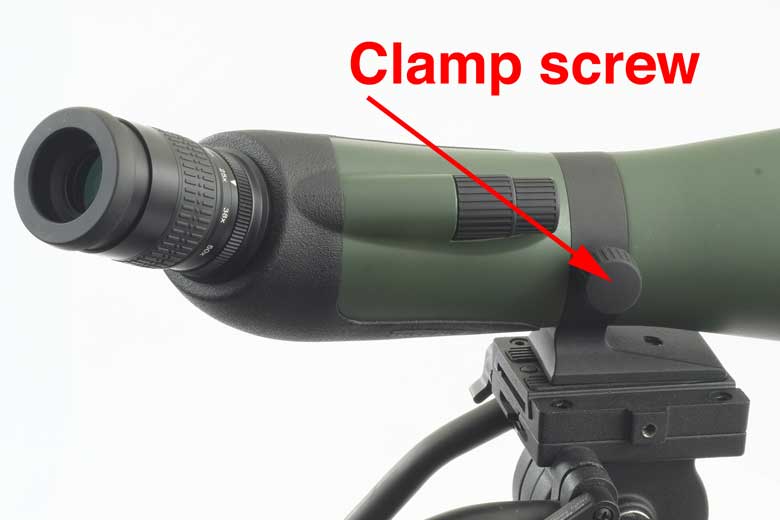 Using this Hawke spotting scope is simple, but different to that of a riflescope. Magnification changes are made using a rotating collar on the eyepiece. 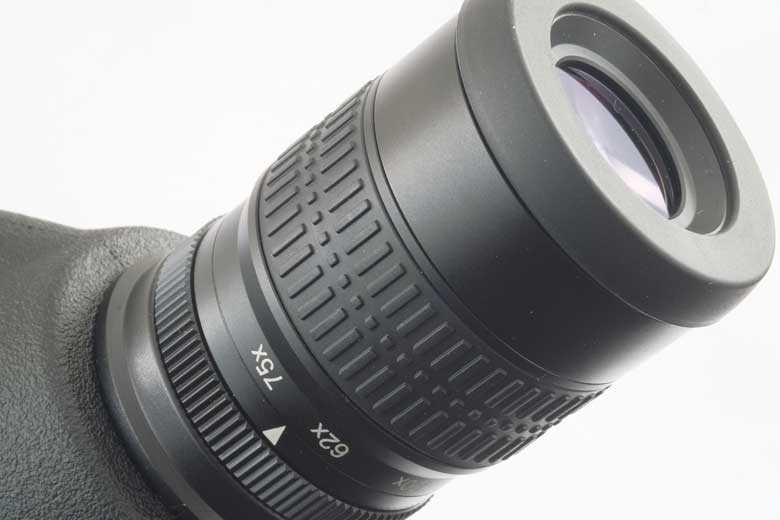 Focusing is undertaken using the knobs on top of the spotting scope. There’s a fast focus knob and one for fine focus. I found it easiest to find the target on low (25 X) magnification and focus. Then increasing the magnification to the full 75 X, only a very slight change to the fine focus knob was required for absolute sharpness of view. 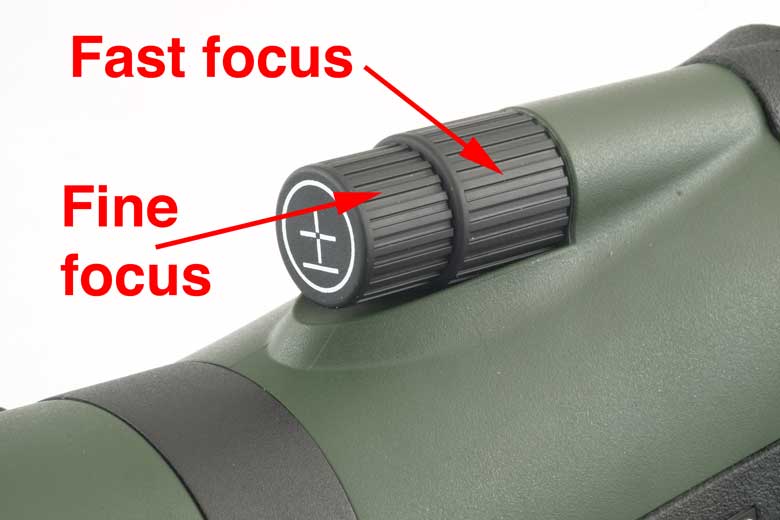 The lens hood pulls out to improve contrast – it also has aiming marks to help with target acquisition. 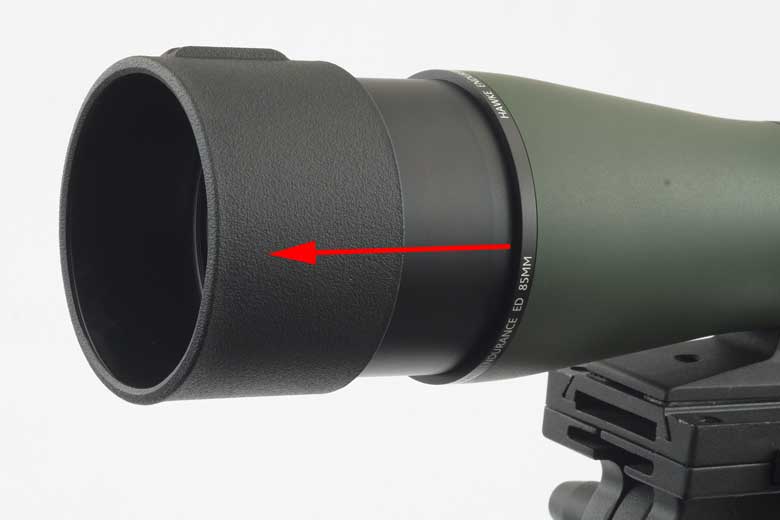 The specs for the scope mention – almost as an afterthought –  that it is supplied complete with a stay-on soft case. In fact this is a remarkably sophisticated piece of clothing to protect the spotting scope in inclement weather even when mounted on a tripod. Both objective and eyepiece can be covered as well using the covers hanging down in this photograph. 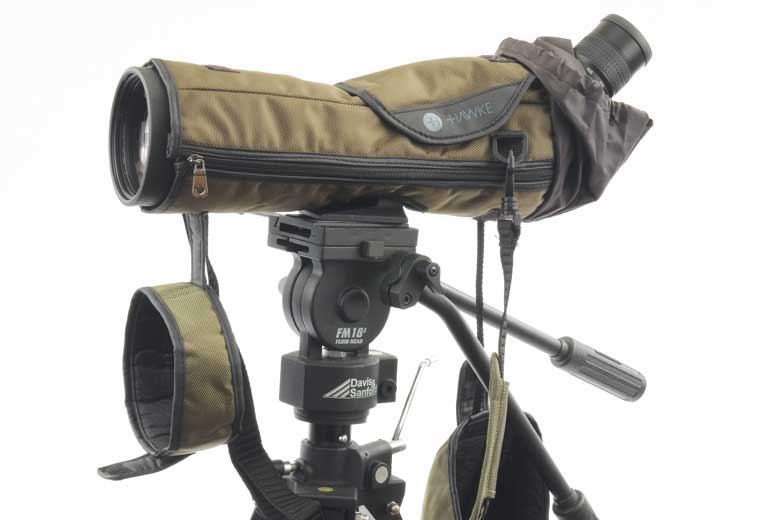 When fully wrapped-up, almost complete protection from the elements is obtained. That’s a vital feature because spotting scopes are often used in all weather conditions for extended periods.

Even though Hawke makes the spotting scope waterproof, Nitrogen-purged and fog proof, it’s still good to have the extra layer of physical protection.

The MSRP is $799. But you can find it selling for less, of course. Use the balance to help pay for a good tripod.You’ll be needing it… 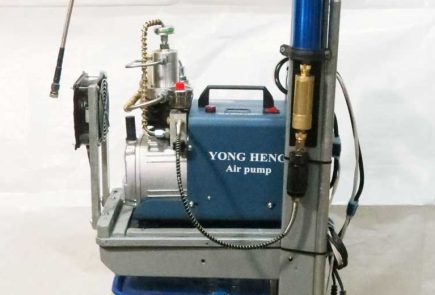 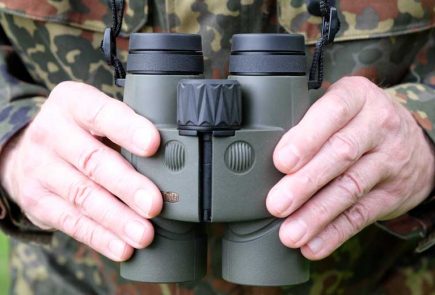