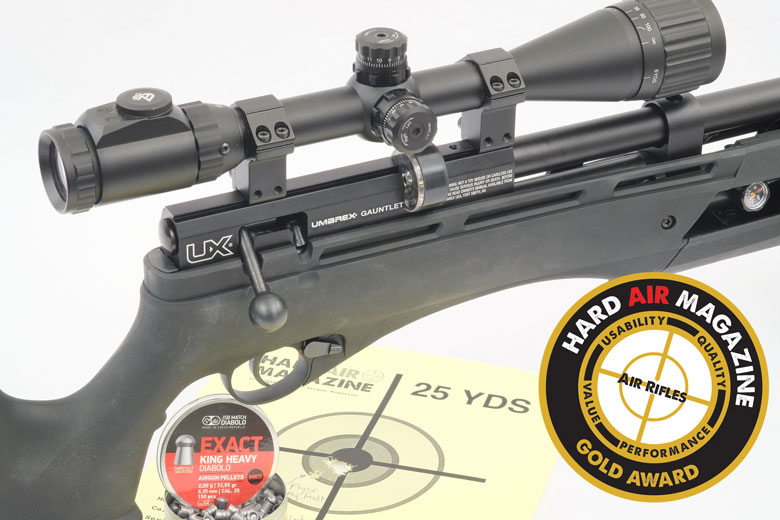 With its combination of features, price and performance, it sets a new bar for the PCP air rifle market in this caliber.

In .25 caliber, this is THE hunting version of the Gauntlet. In HAM testing, we recorded over 45 Ft/Lbs of Muzzle Energy with JSB King Heavy pellets. Predator Polymags shot almost as accurately, too.

If raw FPS is what excites you, the gun tested by HAM achieved almost exactly 1,000 FPS with GTO alloy pellets. And that's in .25 caliber!

Its taken a long time to appear. But at the time of writing, the Umarex Gauntlet .25 caliber is still the only PCP air rifle to combine all of those benefits. Low cost PCPs from other manufacturers miss either the .25 caliber option or have no regulator.

As you can read below, performance and accuracy are good too. And there’s an incremental improvement over smaller caliber versions of the Gauntlet, such as the .22 caliber model HAM tested in November 2017.

So, the Umarex Gauntlet .25 caliber is clearly great value for money.

And here’s a shameless plug! There’s a huge amount of useful information about the Gauntlet in all calibers – including .25 cal. – in HAM Publisher Stephen Archer’s 96-page hard copy book on this air rifle. It’s also great value at less than $20.00 for 96 pages of great information and is available from Amazon. 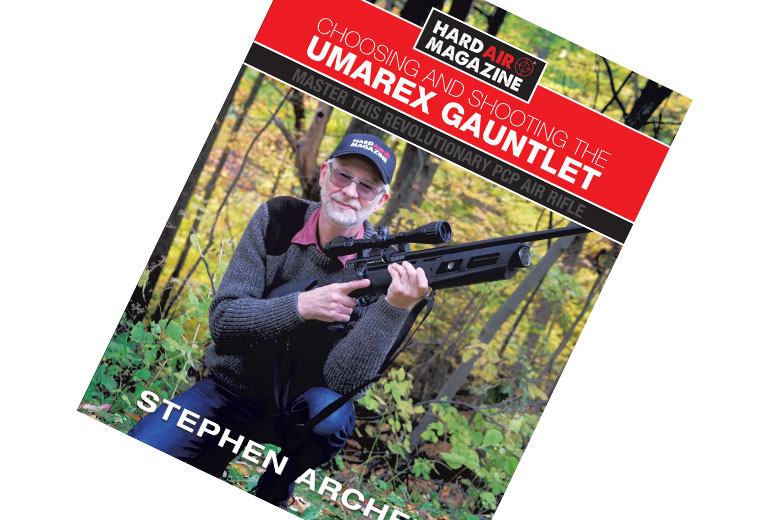 That’s just 0.5% less than the magic “1,000 FPS” that so appears to many airgunners. But, of course, that also was accompanied by the lowest Muzzle Energy, due to the relatively light weight of the GTOs.

Accuracy was generally very good or better with the pellets tested by HAM. Only the H&N Silver Point pellets opened-out somewhat, all the others giving consistently strong accuracy.

For many hunters, the great accuracy of the Predator Polymags in HAM testing will be an important feature of the Umarex Gauntlet .25 caliber.

Best accuracy in HAM testing was achieved with JSB Exact King Heavy pellets. At 25 Yards, the 10-shot group below showed excellent performance. Yes, I knew I had “pulled” that flyer almost before it left the barrel. My fault! 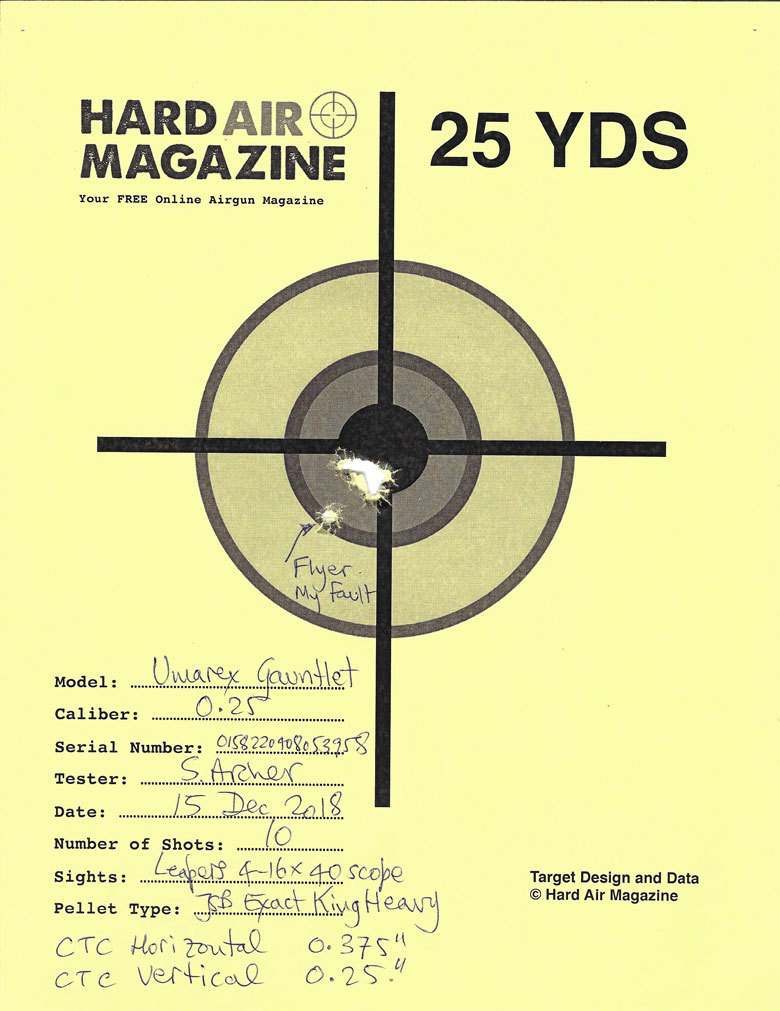 Trigger pull weight of the Umarex Gauntlet .25 caliber  tested by HAM averaged 2 Lb 10 Oz. This is slightly less than the 3 Lb 2 Oz recorded in testing for the .22 caliber version and, again, was very consistent, varying by only 2 Ounces at most during HAM testing.

The single-stage trigger is still rather long and gritty. However, Umarex USA tells us that the factory settings for pull weight, sear engagement and overtravel are being improved, compared to earlier examples. 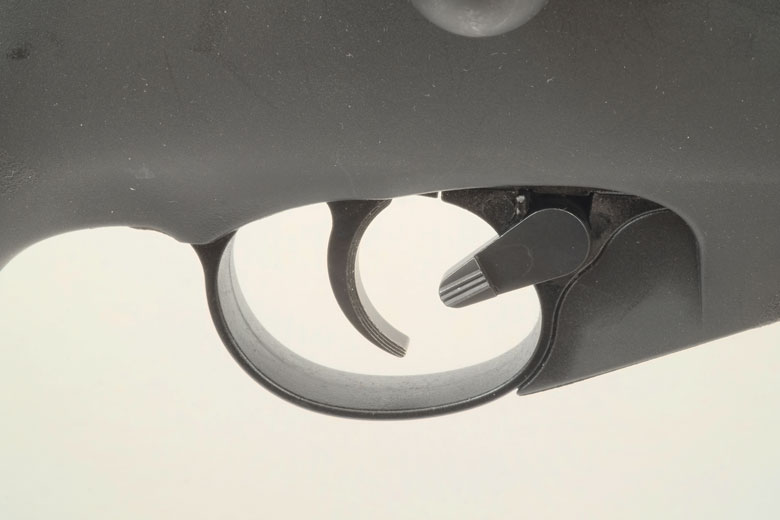 There was some sign of such improvement in the Umarex Gauntlet .25 caliber tested by HAM, however, it’s likely that trigger feel can be further improved by careful adjustment during assembly.

Cocking effort is still high and rather rough. It’s a cock-on opening action, as with most other magazine-fed PCP air rifles, and so is harder to pull back than to push forward.

The rear bolt lock slot in the breech of the Umarex Gauntlet .25 caliber is now quite familiar. This holds the bolt open for loading a freshly-charged magazine and – at the same time – acts as a second safety. 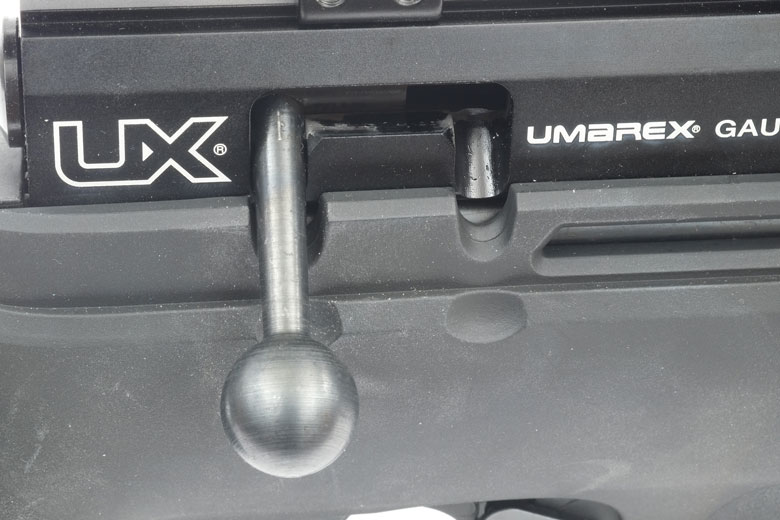 No matter how much you pull on the trigger, the gun will not fire when the bolt handle is locked back and down. This is a definite safety advantage compared to most other bolt action PCPs.

The manufacturer makes a number of claims for the Umarex Gauntlet .25 caliber. The primary one is “up to 27 consistent shots at 895 FPS with 25 Grain pellets”. They also claim up to 45 Ft/Lbs of Muzzle Energy and a trigger pull weight of 3 Lbs.

Compared to these specifications, the Umarex Gauntlet .25 caliber tested by HAM achieved 30 consistent shots. It also produced an average Muzzle Velocity of 874 FPS with JSB 25.39 Grain pellets. Very close to the claims.

So, the HAM test gun gave 11% more consistent shots than claimed. It was, however, accompanied by a Muzzle Velocity that was 2.5% lower. This would probably be caused by the test gun’s regulator being set a little “light”.

The maximum Muzzle Energy achieved by the Umarex Gauntlet .25 caliber in HAM testing was 45.81 Ft/Lbs.

Trigger pull weight of the gun  tested by HAM averaged 2 Lb 10 Oz. This was happily below the claim of 3 Lbs.

Overall, it’s clear that the Umarex Gauntlet .25 caliber tested by HAM met the manufacturer’s claims for its performance.

As can be seen from the chart below, the Umarex Gauntlet .25 caliber tested by HAM gave 30 consistent shots with an extreme spread of 18 FPS. It appears that the regulator pressure was actually reached at shot 28.

This is very satisfactory and is typical of the performance we expect to find from a well-regulated PCP air rifle.

Trigger pull weight was also very consistent, varying by just 3 Ounces during HAM testing. This is excellent consistency, particularly at the price being asked for the gun.

Another aspect of consistency was the demonstrated ability of the Umarex Gauntlet .25 caliber tested by HAM to shoot accurately with 6 out of the 7 HAM standard test pellets. This lack of “pellet pickiness” is another good characteristic for the gun.

The Umarex Gauntlet .25 caliber is fitted with a shrouded barrel. This provides a reasonably quiet report. However, it’s louder than the .177 and .22 caliber versions of the same gun.

Overall noise level is somewhat higher than that of the Benjamin Marauder – HAM’s Gold Standard – in our subjective testing. But it’s still clearly much reduced from the levels that would be heard from an un-shrouded barrel.

As expected, Umarex does not bundle a scope with the .25 caliber Gauntlet.

There are long scope rails machined into the breech. These are standard .22/airgun rails, meaning that Weaver/Picatinny rings do not fit .

Of course, you have to budget more for the scope, but at least you are able to select the one you want. And, of course, the vast majority of bundled scopes have poor optical quality, so this way you’ll end-up with a better scope and a better overall shooting experience.

For HAM testing, we mounted a Leapers 4 – 16 x 40 AO scope. This complemented the overall balance and weight of the air rifle, proving effective in use. It’s the same scope as we used to test the .22 caliber version, for consistency. 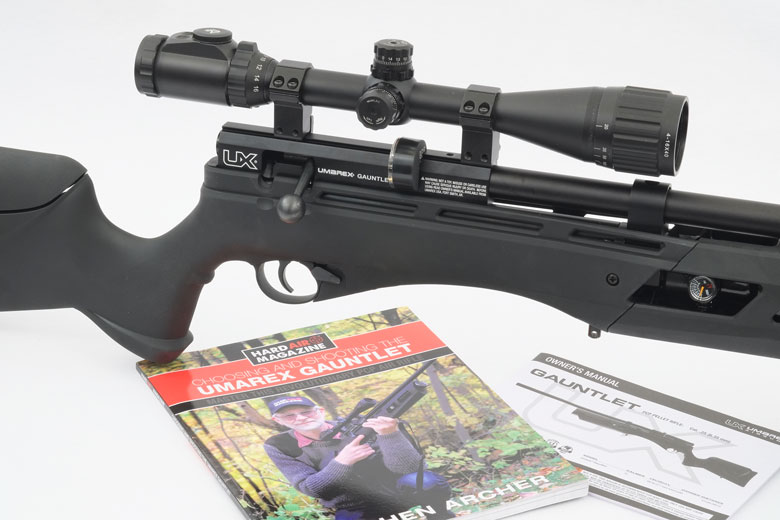 The Umarex Gauntlet .25 caliber has the same overall length as the other calibers. This is long at 46 1/4 Inches overall. That’s about 3 Inches longer than a Marauder, for example. It weighs 10 Lbs 1 Oz as tested by HAM with the Leapers UTG 4 – 16 x 40 AO scope.

One difference between the Umarex Gauntlet .25 caliber  and the .177 and .22 caliber versions is the provision of a barrel band – or actually a “shroud band”. This braces the barrel/shroud assembly to provide better support in case of knocks in use. It looks like this… 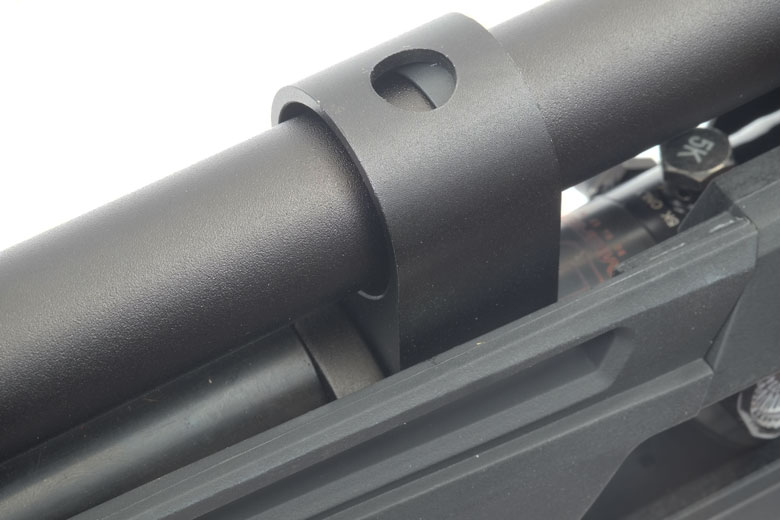 Umarex USA tells HAM that this barrel band will be offered as a low cost upgrade to existing owners of .177 and .22 caliber guns for – probably – a limited time. Look out for this to be announced before mid-year 2019.

As with the other calibers, the  Umarex Gauntlet .25 caliber is supplied with a “degassing key”. This is a great feature as it enables all the pressure to be removed from the gun and tank – if required – for maintenance, or to make for jam clearance. 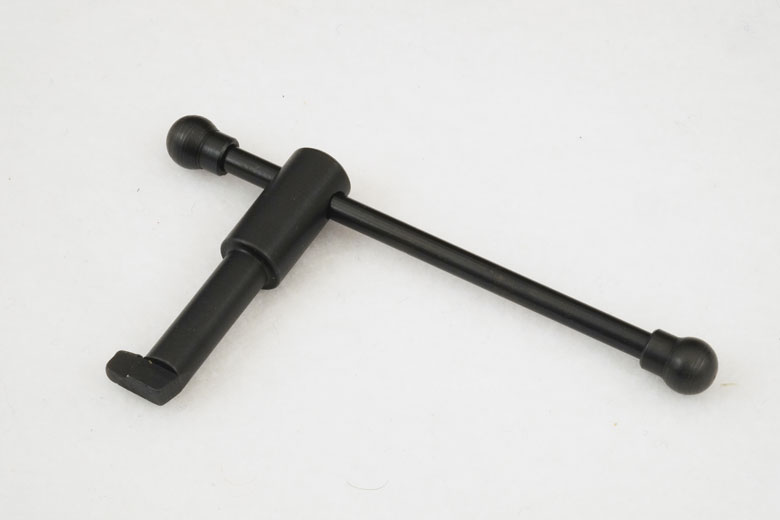 It works by camming open the valve, allowing all the air to exhaust through the breech (or muzzle if the bolt is closed).

Because of the regulated design and low, 1,900 PSI regulator pressure, the Umarex Gauntlet PCP air rifle offers remarkable flexibility for filling with HPA. This means that the tank does not have to be filled to the full 3,000 PSI in order to achieve full performance.

So, if you’re filling from a hand pump, you can have full power even if you fill to just 2,500 PSI, for example. The only difference is that you will get less consistent shots per fill. This is because fewer shots will be required to take the air in the tank down to the 1,900 PSI regulator pressure.

So, if you find it tough to fill to 3,000 PSI with a hand pump – and many of us do – just fill Gauntlet to the pressure you can easily manage. Filling is undertaken using a standard 1/8-Inch NPT standard quick disconnect.

Although the GTO alloy pellets shot accurately, they chambered VERY hard. Were they to jam in the Gauntlet, it could be (almost) impossible to clear. This made them stressful to shoot – I would stick to alloy pellets for peace-of-mind!

Of course, beauty is in the eye of the beholder. And familiarity usually brings more appreciation of appearance.

But this has not happened to the HAM team in the case of the Gauntlet! It remains a clunky-looking gun to the HAM Team, primarily due to the stock design.

That black synthetic stock is well-molded, with the seam lines disguised and/or finished to make them less obvious. Unfortunately, the stock material tends to show the effects of minor handling marks, like finger nail marks. 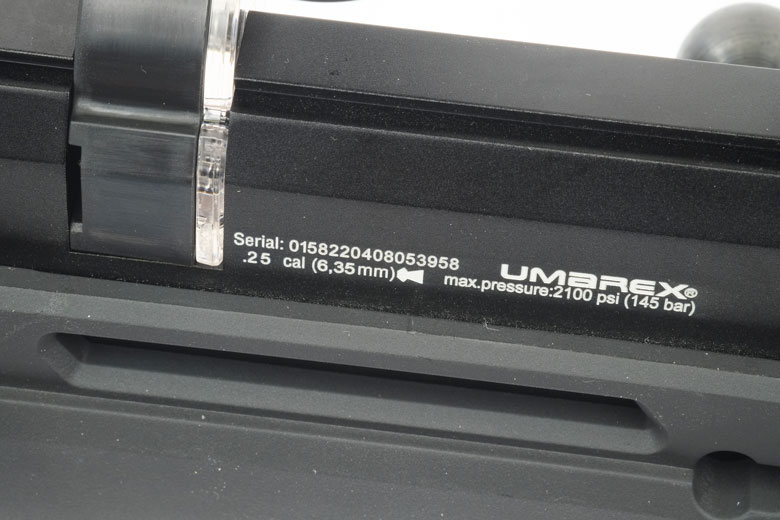 Overall, the quality of fit and finish are quite acceptable and will meet most owner’s expectations for an air rifle of this price. Remember: handsome is as handsome does…

This is disappointing, given that we have seen other Gauntlets fitted with a red/green faceplate for easy and accurate reading, as is illustrated in the Instruction Manual. 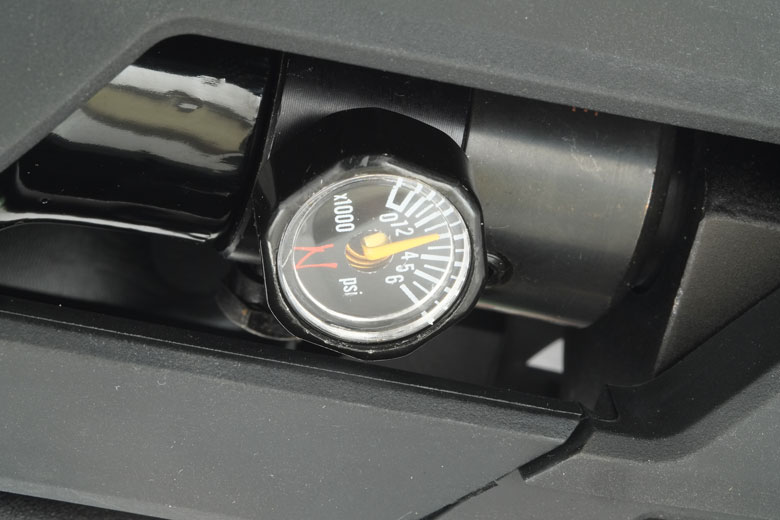 Note that this gauge indicates the fill – i.e. unregulated – pressure, not the regulated pressure. This means that HPA filling pressure should always read using a larger gauge on the pump or HPA tank, as with any other PCP air rifle, to achieve the correct fill PSI.

The Umarex Gauntlet .25 caliber is just starting to become available from the usual online sources such as Pyramyd Air and Airgun Depot. However, we can expect that it will also be available from a number of the larger “bricks and mortar” stores such as Cabelas that already stock the smaller caliber versions.

The gun ships with one 8-shot magazine, a single shot tray and degassing tool.

The Gauntlet is supplied with a 3-year limited warranty, provided by Umarex USA. This shows that Umarex has confidence in the product. Spare parts are available by phone order from Umarex USA.

There’s a separate, new instruction manual for the Umarex Gauntlet .25 caliber. This is comprehensive, well-illustrated and includes English, French and Spanish sections. It covers trigger adjustment and instructions for removing and replacing the regulated HPA tank. 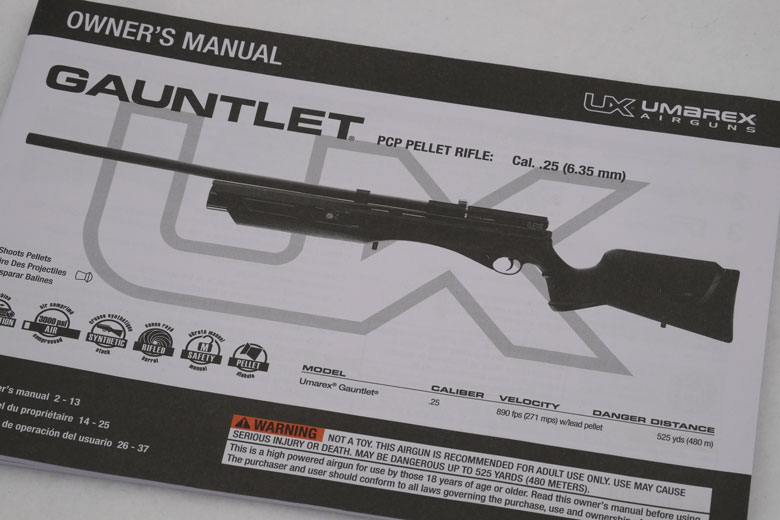 It’s important to note that the Umarex Gauntlet .25 caliber has a 1,900 PSI regulated tank that is removable and which can be replaced by another. As the tank itself contains the regulator, do not replace it with one designed for a .177 or .22 caliber Gauntlet as these give a much lower output pressure. 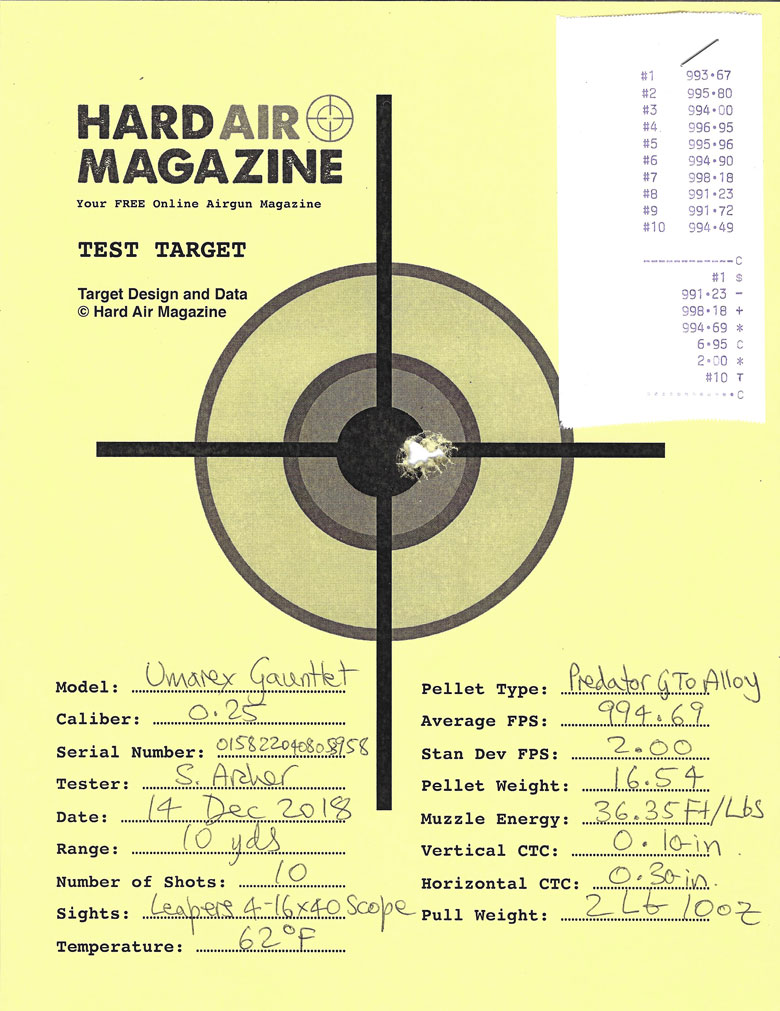 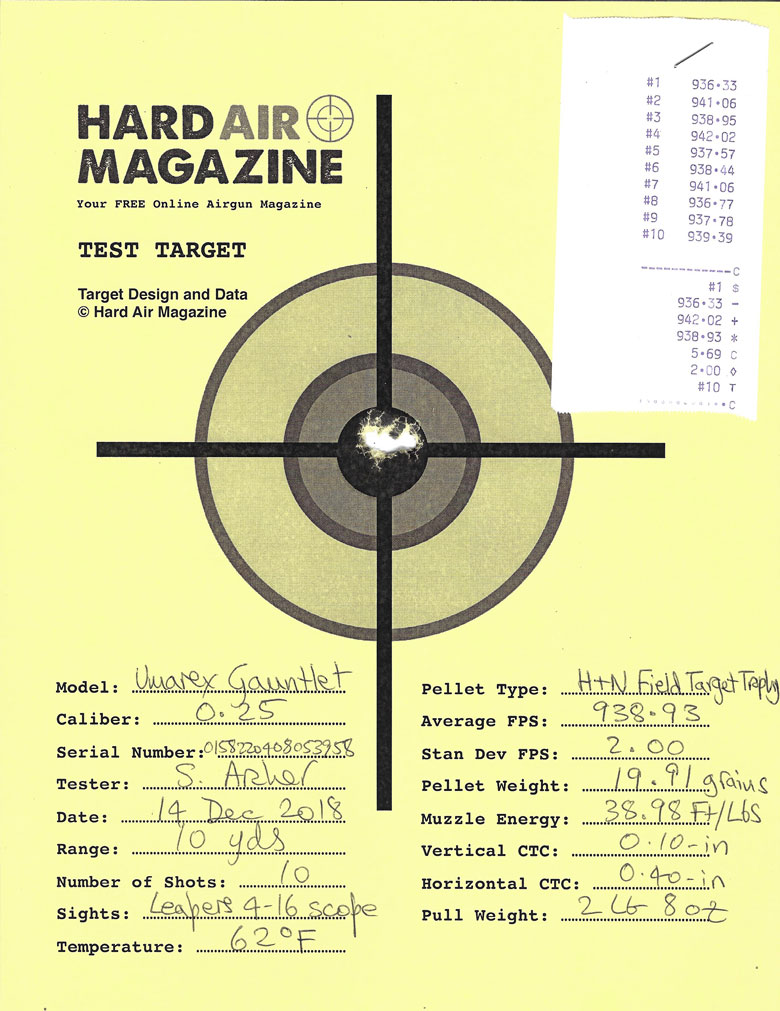 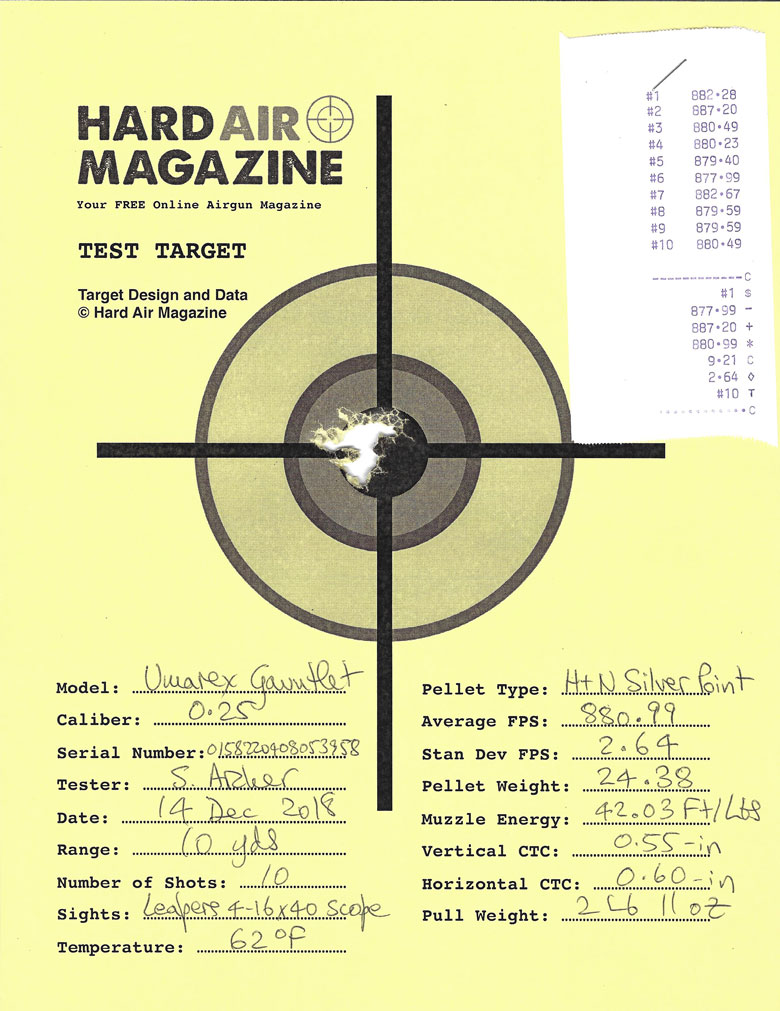 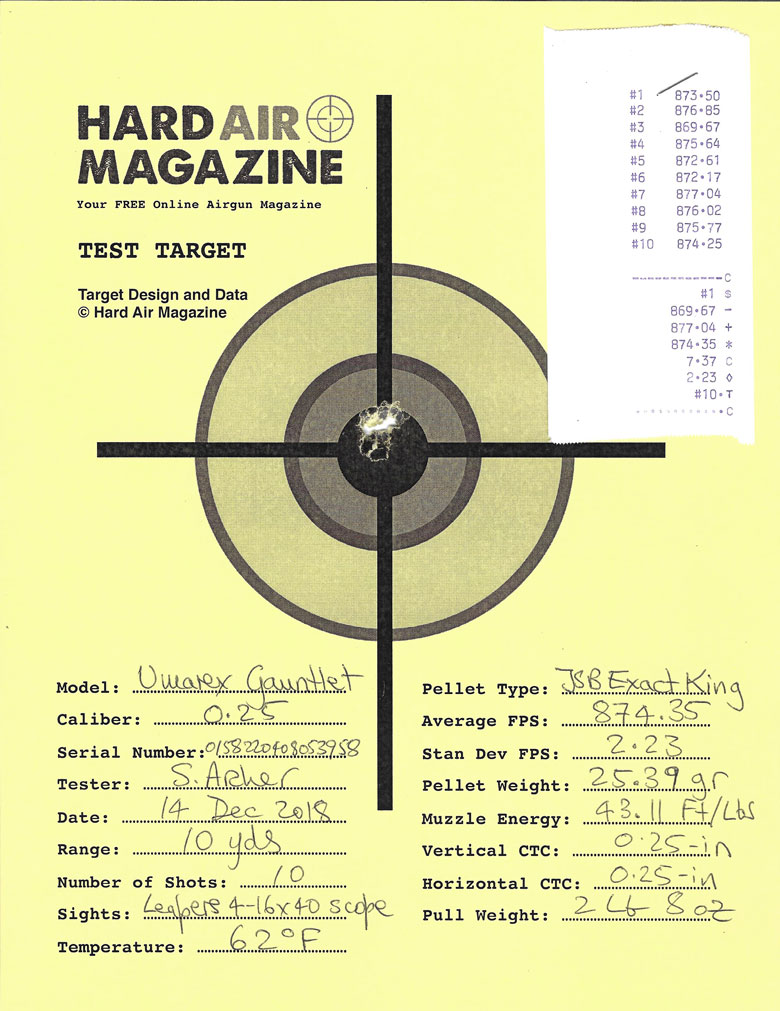 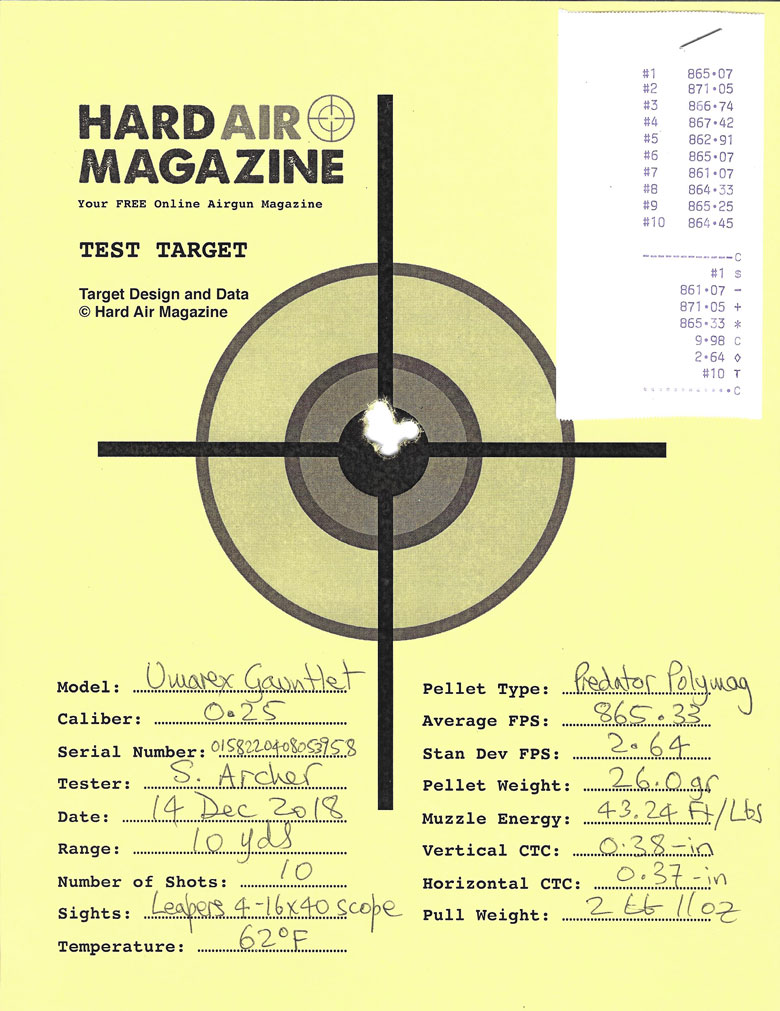 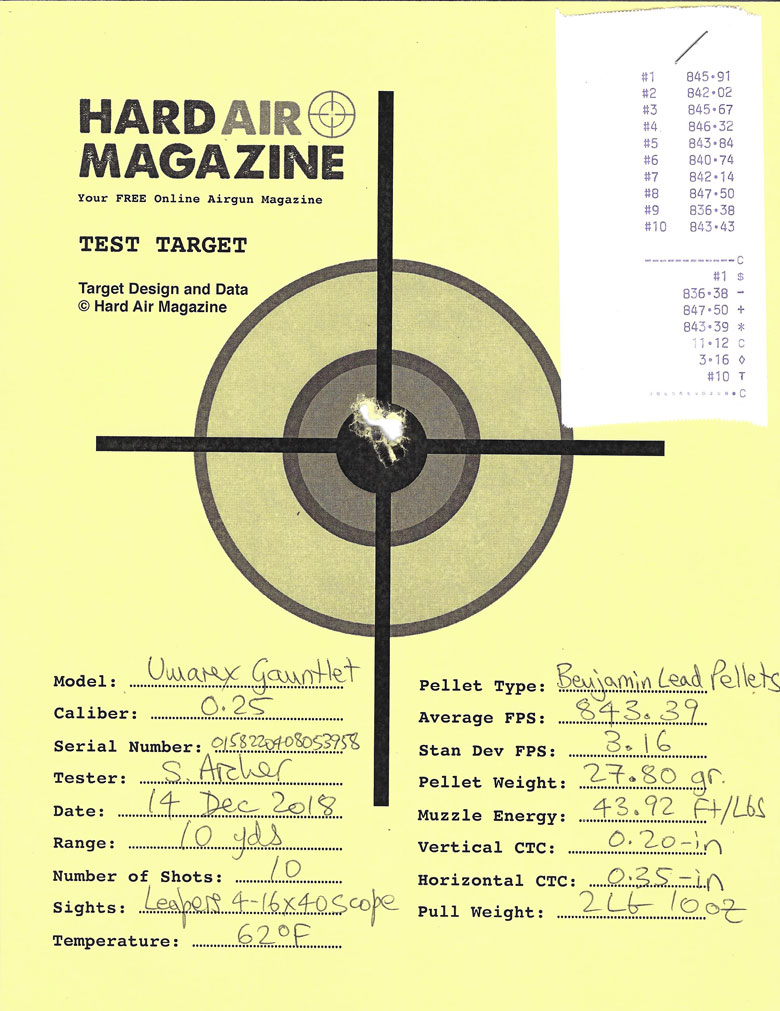 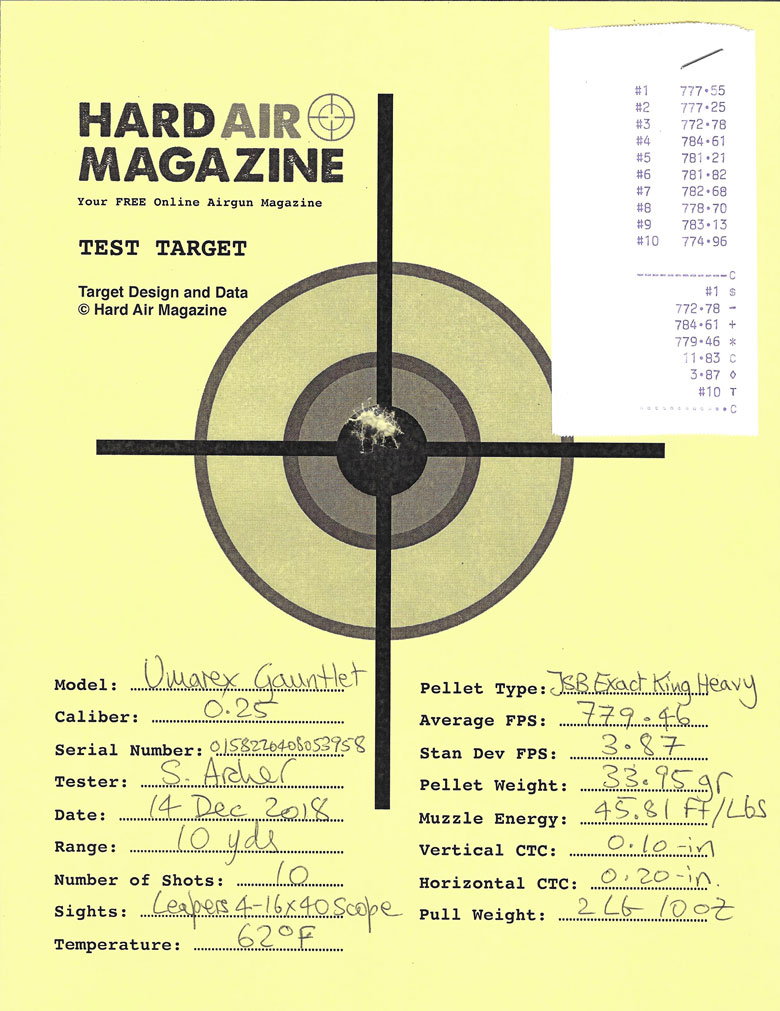 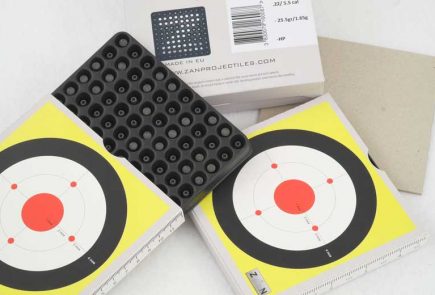 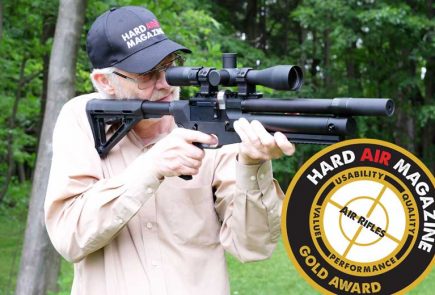