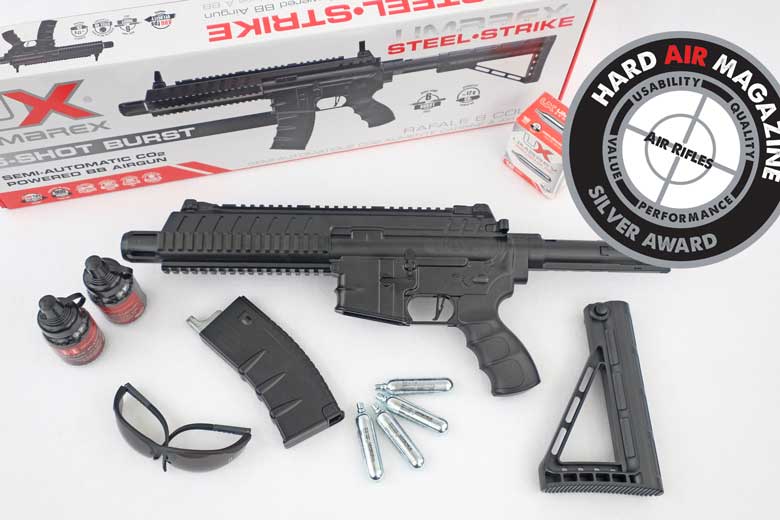 The Umarex Steel Strike is cheap, surprisingly accurate and has a good shot count. It has a huge onboard BB capacity and the 6-shot burst capability makes for a TON of fun!

While not intended to be a faithful replica of an AR15-type firearm, the Steel Strike will probably satisfy many owners requirements for appearance, too.

This is an out-and-out, low cost fun gun. Viewed in that light it earns a HAM Silver Award for smiles per Dollar! You'll be needing to stock-up on CO2 and BBs...

78%
HAM Rating
You have rated this
Full Review

HAM Tester Doug Wall saw this Umarex Steel Strike BB gun at a local store. It was an impulse purchase. He decided to give it a good home and bought it as a project and fun gun.

To be honest, Doug didn’t have extremely high expectations for this value-priced BB gun. But he was intrigued and it’s definitely different to anything we’ve tested before in Hard Air Magazine. In fact, it turned-out to be a great buy – Doug’s been smiling ever since!

So let’s read about what he found…

As a BB-firing long gun with full-auto burst capability, the Umarex Steel Strike is strong value at a Street Price of less than $100. There’s very few comparable products to it, other than the Steel Force – also an Umarex product and clearly a sibling to the Steel Strike.

The design is intended to give the “feel” of a centerfire AR, it’s unashamedly NOT a specific replica. If incredibly-accurate reproduction BB guns are your choice, Umarex has plenty of them available in its Legends range, such as their MP40 replica.

The Steel Strike is something completely different, it’s a low cost, all plastic fun gun with a high specification and – as Doug found out – remarkably good performance. 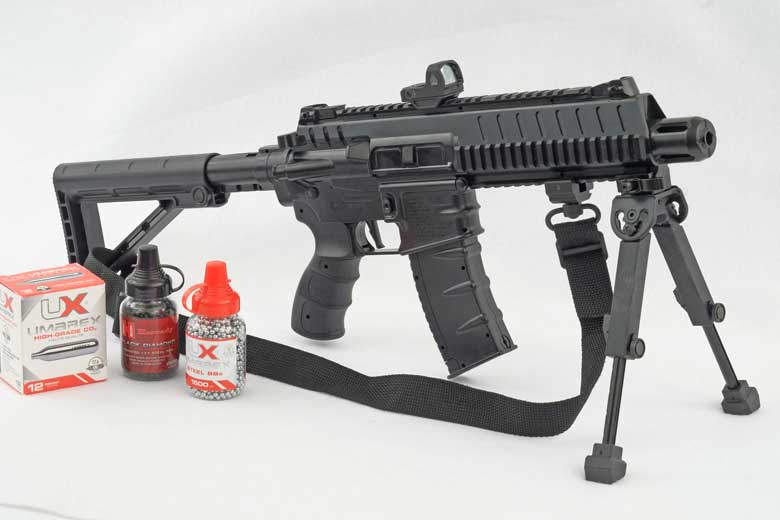 The Steel Strike is pretty-well covered with molded Picatinny rails. This makes it possible to add accessories such as a red dot sight. A recommended upgrade as you’ll read below.

For more fun, we also added a Leapers UTG Rubber Armored QD bipod. That was followed by a an AR-style sling to give the result you see above.

Now the Steel Strike is a plastic-bodied, reduced-size BB gun that’s loosely based on an AR. It weighs between four and four and a half Pounds in weight – depending on how many BBs you have on board. The overall length with the stock extended is 28 Inches.

Most of the AR-style controls do not work, although the magazine release and safety/fire selector switch do. There’s a charging handle that’s fun to operate, and cocks the hammer when you first operate an un-charged “dead” gun, but is not required for most usage.

So, realistic looks and feel? Not really. But then, Umarex doesn’t claim that it it is…

Here’s where HAM Tester Doug Wall was surprised. “Accuracy is quite good!” he wrote in his test notes. “Even the least accurate BB we tried could keep all the shots within a minute of soda can at 10 Yards”. And it did that on 6-shot burst mode, too.

The Umarex Steel Strike is supplied with flip-up front and rear sights. Understandably at the price, these sights are non-adjustable – hence the need to fit a red dot sight. Unfortunately the gun shot about 2.5 Inches low at 10 Yards 🙁

Given the all-plastic construction, Doug plans to carefully file down the front sight a little to bring the Point Of Impact on-target. At this price, why not? 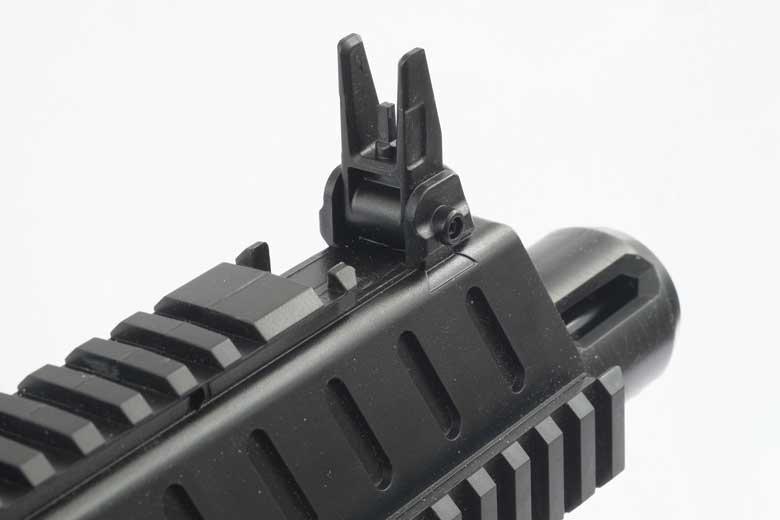 Doug also found the rear sight aperture to be too small for his taste. There’s likely to be a little careful drilling there to provide a lager peep in future! 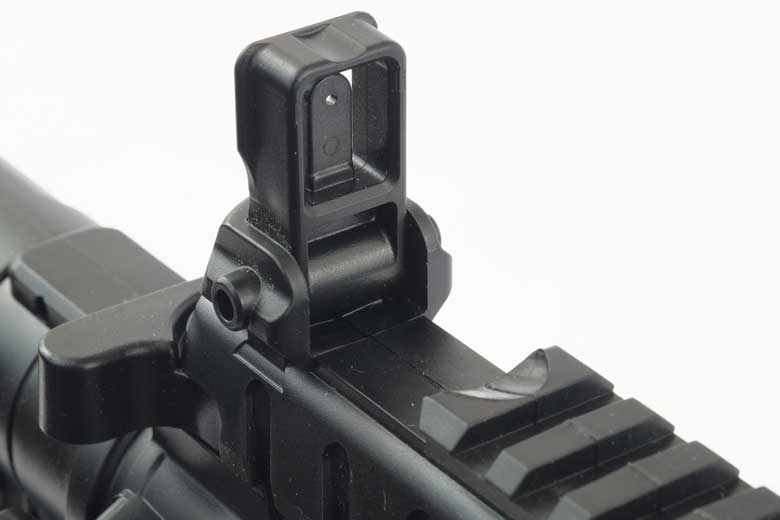 Here’s the results from shooting the Umarex Steel Strike with the un-adjusted sights. As you can see, that’s a pretty good group – just in the wrong place. 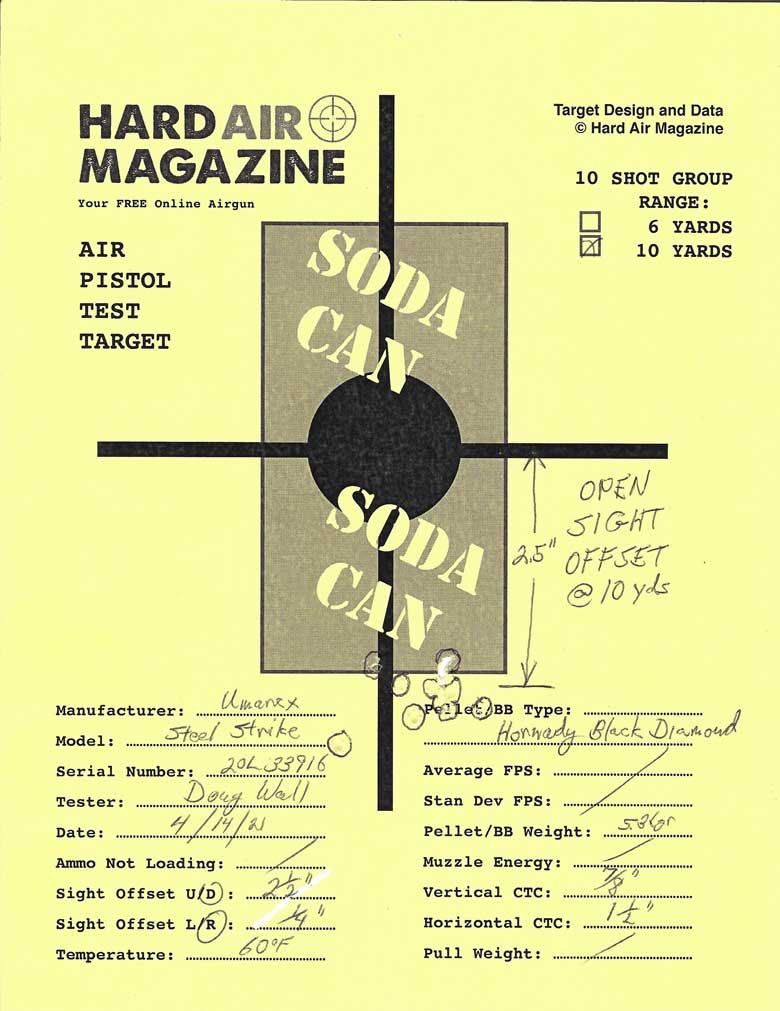 So a red dot reflex sight was mounted for HAM testing. We like the Leapers UTG OP3 Reflex Sight – even though it costs more than the Steel Storm. But – hey – we were having fun with this BB gun! 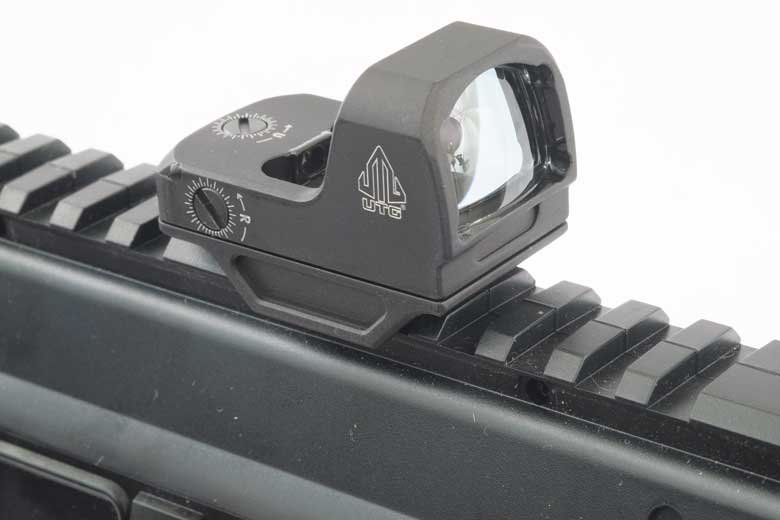 The manufacturer claims that the Umarex Steel Strike “takes many design cues from the M4 rifle”. This is true, as described above. Design cues, yes. Authentic replica, no.

Umarex also claims a maximum Muzzle Velocity of 400 FPS. As usual, HAM testing took place in a cool – 60 degrees F – basement range. Under test we recorded a maximum 343 FPS. However, as the FPS of CO2-powered airguns rises by about 2 FPS per degree F increase in temperature, that 343 FPS equates to 403 FPS at 90 degrees F.

So, the company’s FPS claims are realistic and correct!

The 6-shot burst mode position is revealed  after taking the switch off of safe. It’s hidden under the lever in this photograph below. 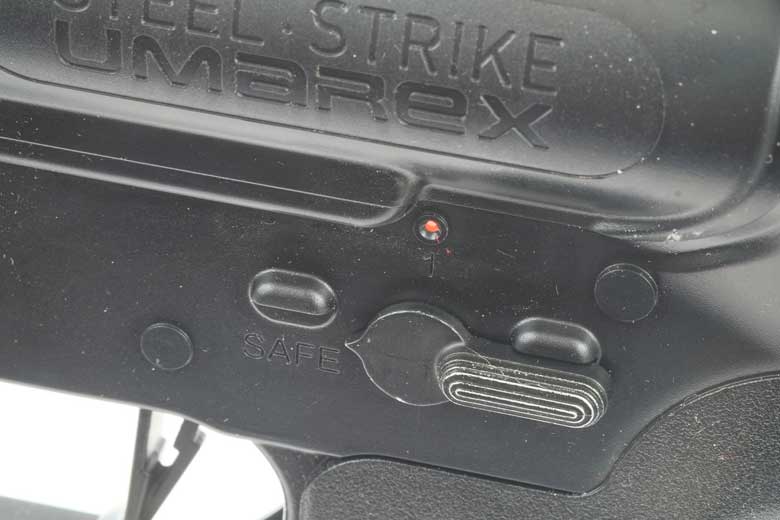 The HAM Team was surprised by the consistency of Doug’s Umarex Steel Strike. Again, our hopes were not too high, given the price.

However, we found very good performance!

Trigger pull weight averaged a reasonable 4 Lbs 10 Oz, with a variation of just +/- 5 Ounces. That’s really pretty good and a result that would not disgrace some $300 PCP air rifles.

Likewise, the Standard Deviation (the statistical measure of variation of FPS in a shot string) averaged just 4.95 FPS. True, that’s with steady shooting in semi-auto mode, but a sub-5 FPS Standard Deviation would be a fine result for pretty-well any PCP air rifle: even one costing $1,000!

Incidentally, the Steel Storm also delivered very consistent Muzzle Velocities across the range of HAM standard test BBs. The FPS varied only between 331 and 343 FPS, with an average of 339 FPS. Wow! 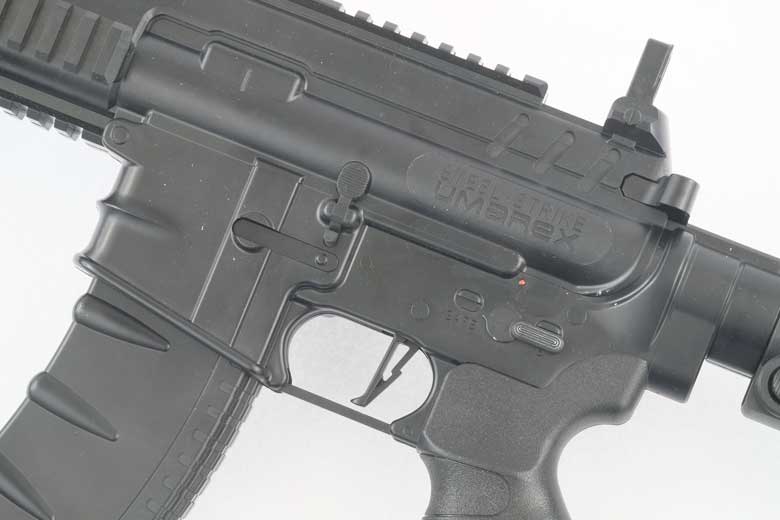 With that average trigger pull weight of 4 Lbs 10 Oz, the Umarex Steel Strike has a pull weight that’s not unreasonable for an AR-type firearm. Unlike some pellet-firing, CO2-powered firearms replicas, this one does not use a double action (i.e. revolver) action. This keeps the trigger pull weight much lighter. 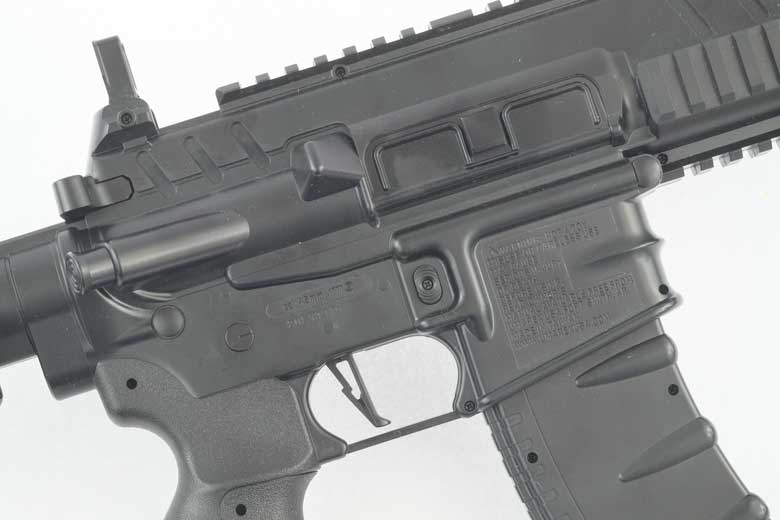 Then there’s the 6-shot burst setting on that fire selector switch. The result was FUN, FUN, FUN! Of course, as with any CO2-powered airgun, FPS falls rapidly in full auto mode. But the Steel Strike still stitched the soda can target with 6 on-target hits at 10 Yards.

There’s nothing to complain about there… 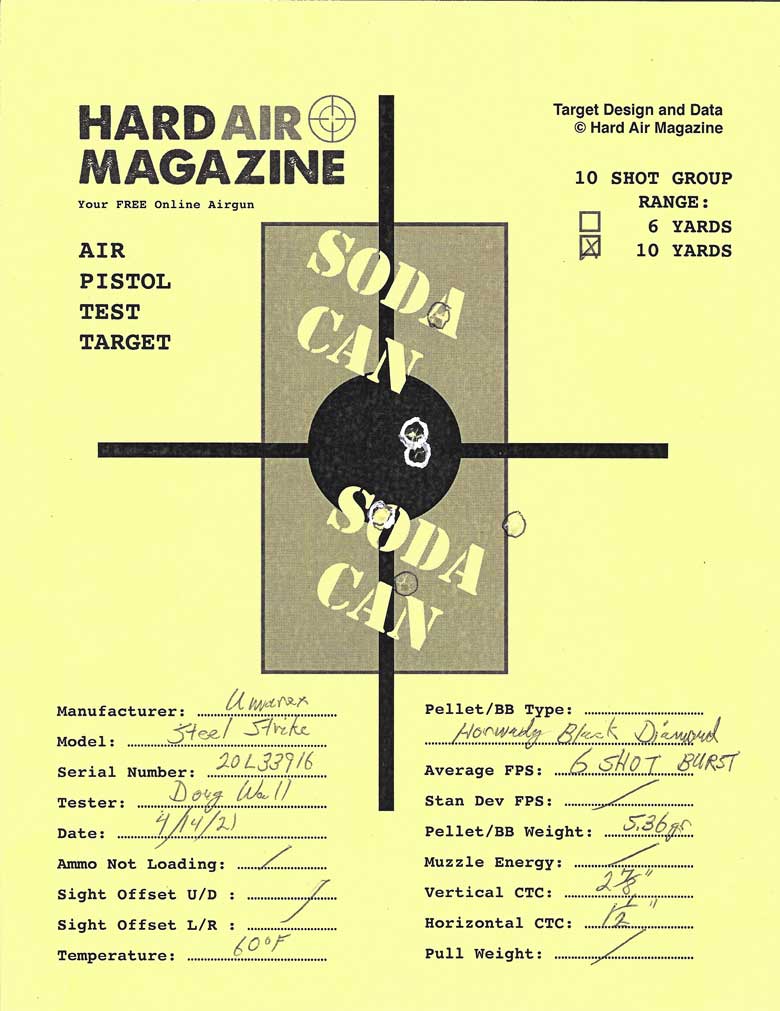 At this price, it’s not surprising to find that there’s no externally-visible blowback. So there’s limited felt recoil effect. Also the forward assist and ejection cover are fixed moldings.

However, the charging handle is fun to use and feel good. Doug found that it will give you a few more shots on manual operation, after the gun will no longer fire due to low gas pressure. It can also be used to shoot the gas down for recharging.

Another positive aspect of the Umarex Steel storm tested by HAM was the shot count.

The Steel Storm is powered by two 12 Gram CO2 cartridges. Unusually, these are concealed in the buttstock tube. Just pull off the multi-position stock to install and replace the cartridges.

Doug obtained 140 shots before the Muzzle Velocity fell to 300 FPS in slow-fire, semi-auto mode. The action finally stopped firing after a grand total of 180 shots. This is a shot count that’s about average for this type of BB gun. 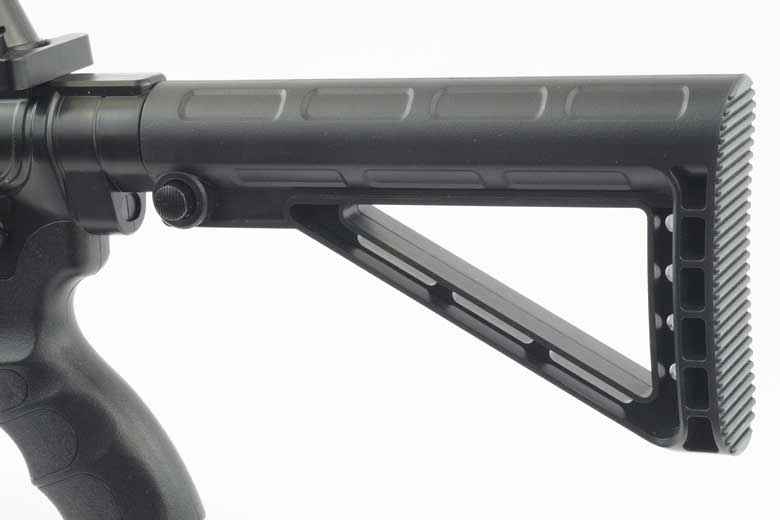 The Muzzle Velocity of the Umarex Steel Storm tested by HAM was fine for engaging rabid paper targets and aggressive soda cans!

True, it was 100 FPS lower than would be found in more expensive BB guns (again like the MP40) using the same CO2 cartridges, however the 340+ FPS on test was quite snappy enough for fun shooting.

“You have to take it for what it is – an all plastic gun.” Doug Wall’s conclusion is very accurate.

However the plastic moldings are well executed with minimal flash. The fire selector switch and magazine release are the only two metal parts to be visible on the exterior. 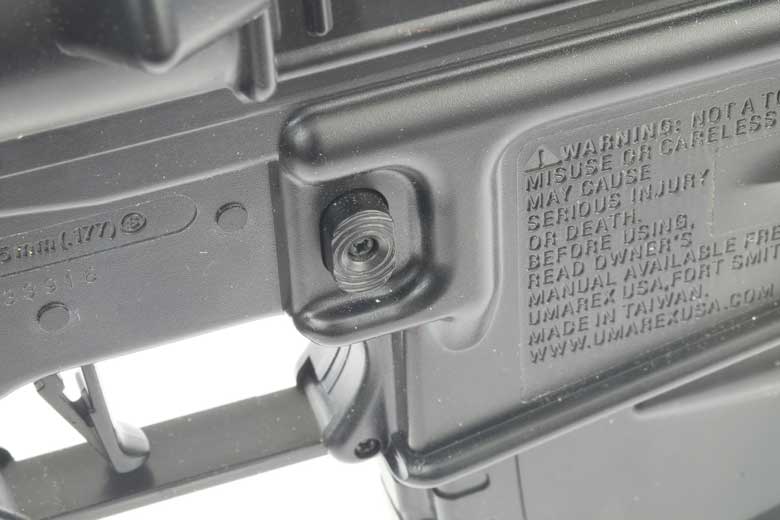 The Umarex Steel Storm is widely available online and at physical retail stores. It’s supplied with a typical, well-illustrated, multi-lingual Umarex owner’s manual. But the warranty period is a disappointing 90 days – in alignment with most of Umarex USA’s BB guns.

The gun uses an unusual magazine system. There’s a large capacity BB reservoir – the specification says 900 rounds. BBs are simply poured in through the top of the reservoir. 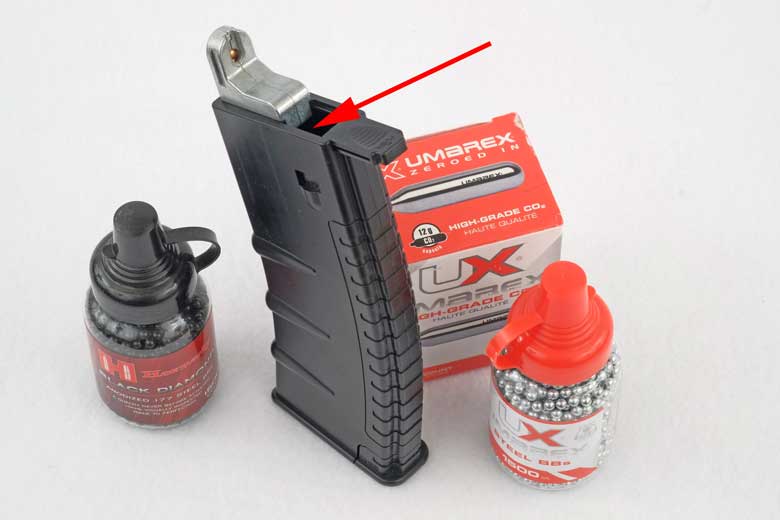 This reservoir is used to feed an integrated 30-shot magazine system. This uses a pull-out end cap, the mechanism “catches” BBs from the reservoir as it is rocked. These are then loaded into the action for firing.

So far, this BB loading system has worked well. It’s unusual but faster than loading a conventional spring-operated “follower” system. And the huge reservoir capacity means that you don’t need to carry a separate bottle of BBs around with you. 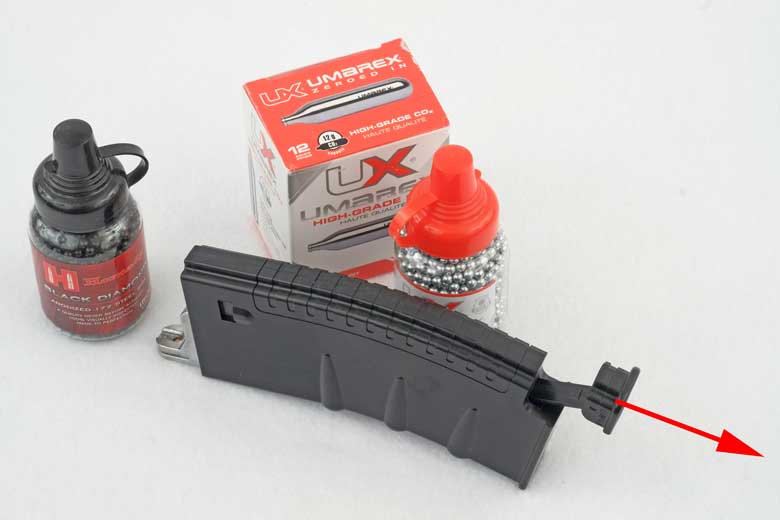 The 12 Gram CO2 cartridges are pierced using the usual supplied 6 mm Allen (hex) wrench once the stock has been removed.

SAFETY FIRST. As with all BB-firing airguns, it’s necessary to wear shooting glasses when firing this airgun. Also do not shoot at hard surfaces or water. BBs tend to bounce off these surfaces and may hit you, or something other than what you intended. If in doubt, don’t pull the trigger! Due to the (fairly) realistic appearance of this product, handle it as you would a firearm. Do not display it in public or in any place where it could be mistaken for a cartridge firearm. 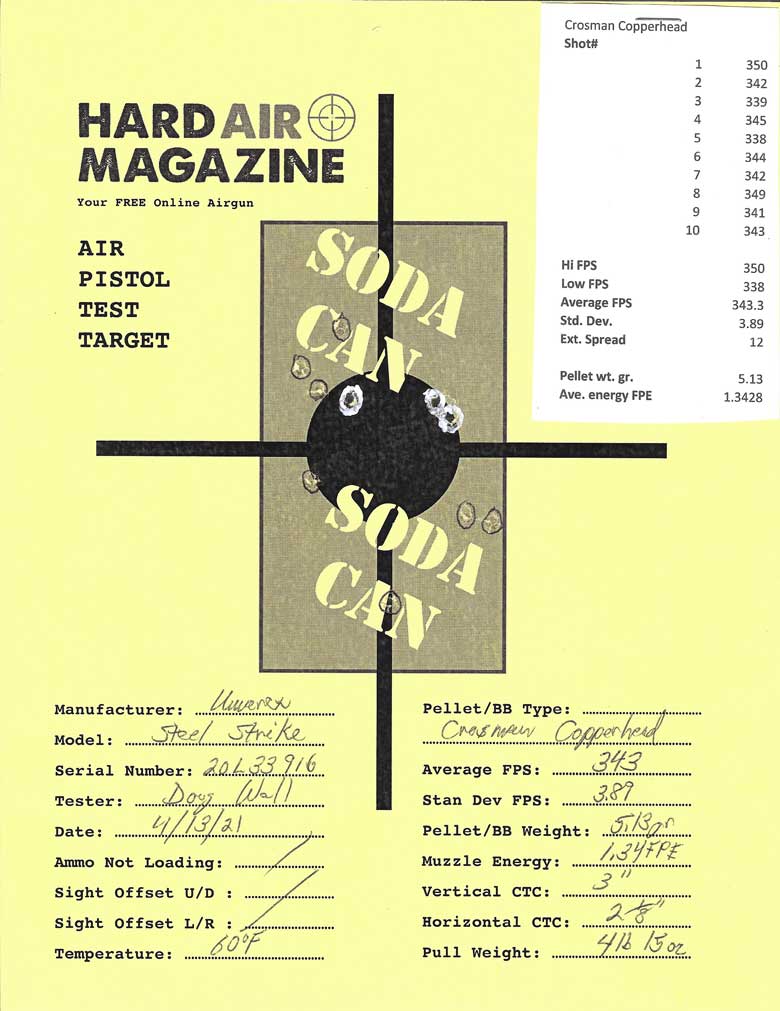 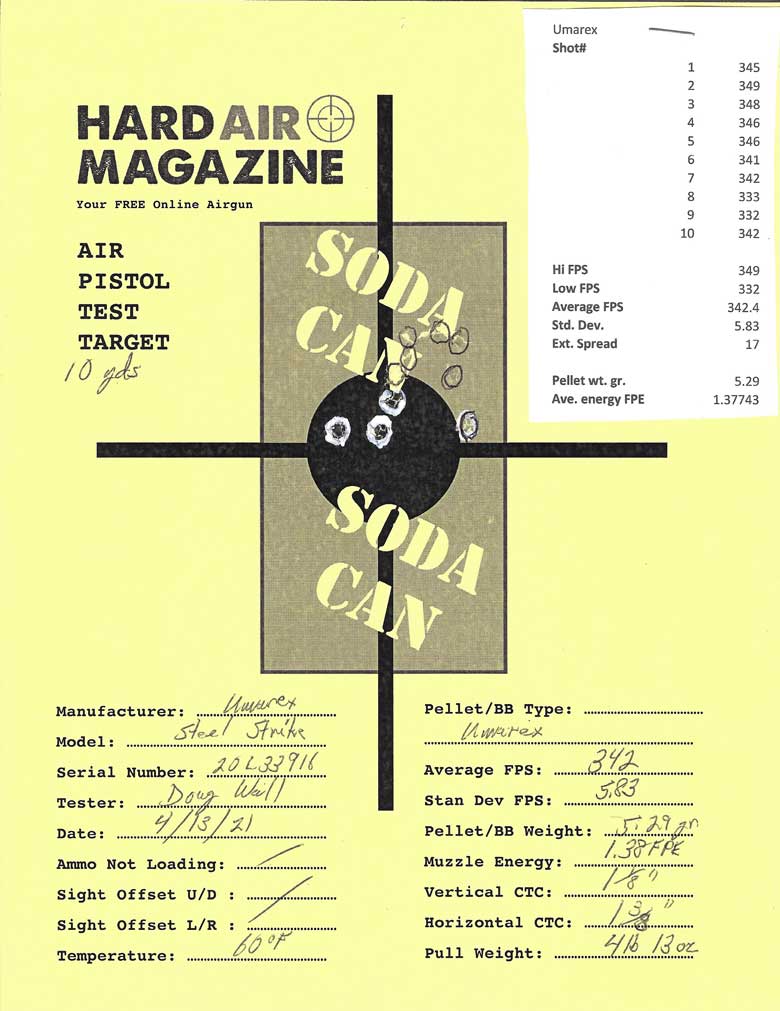 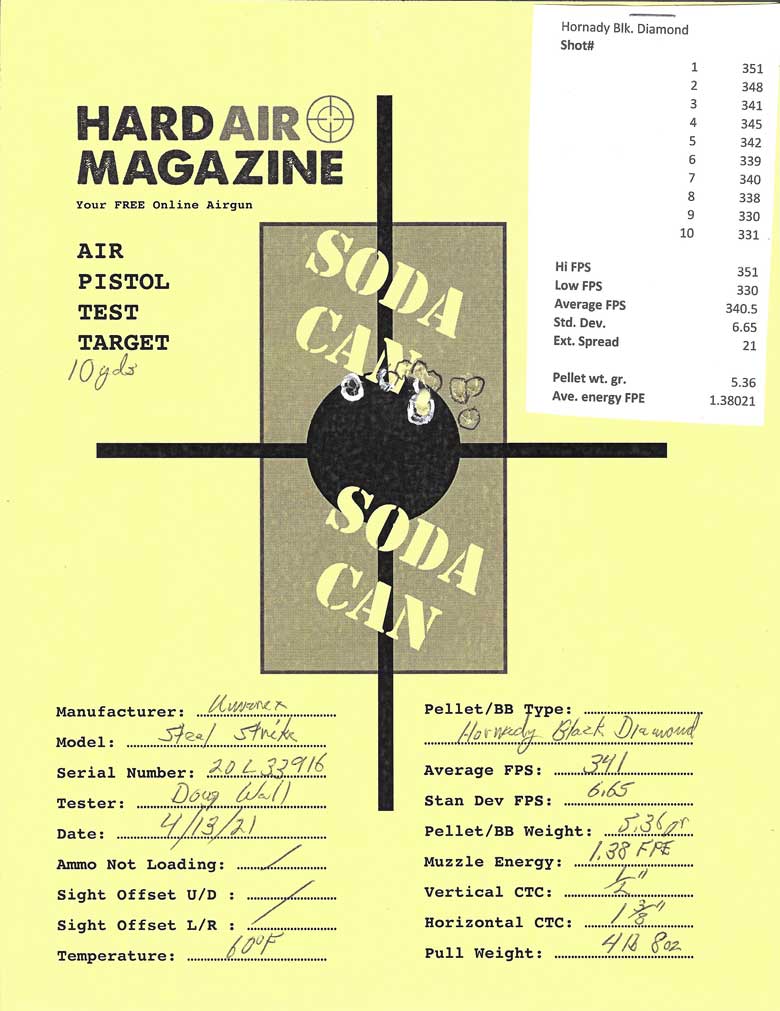 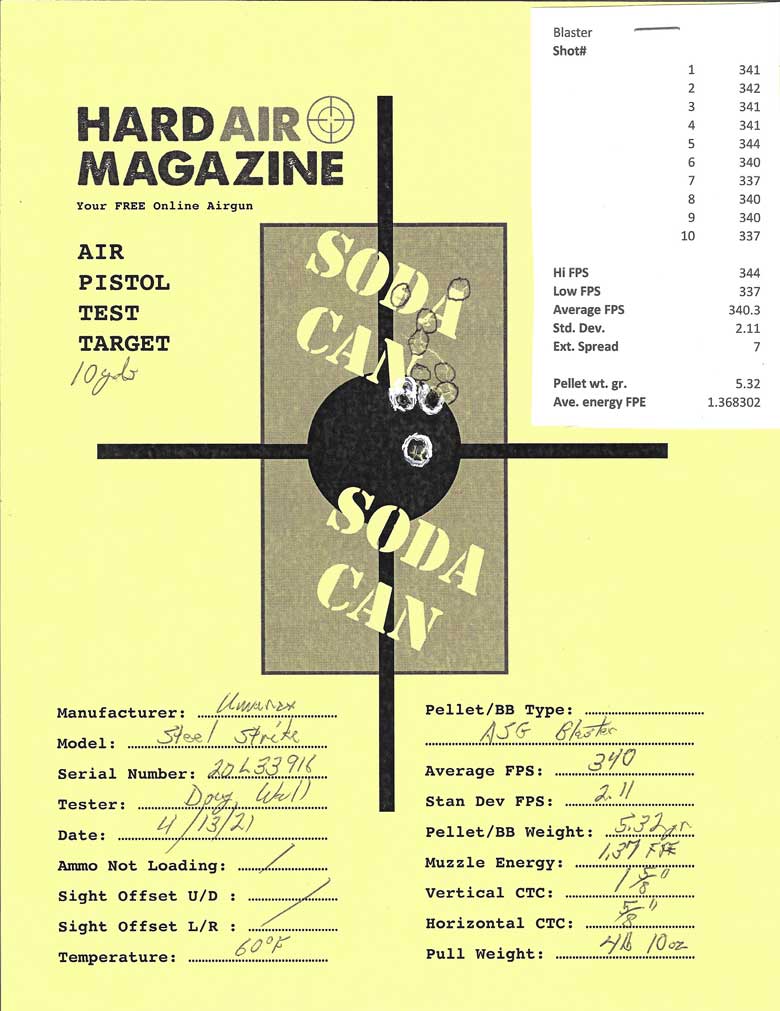 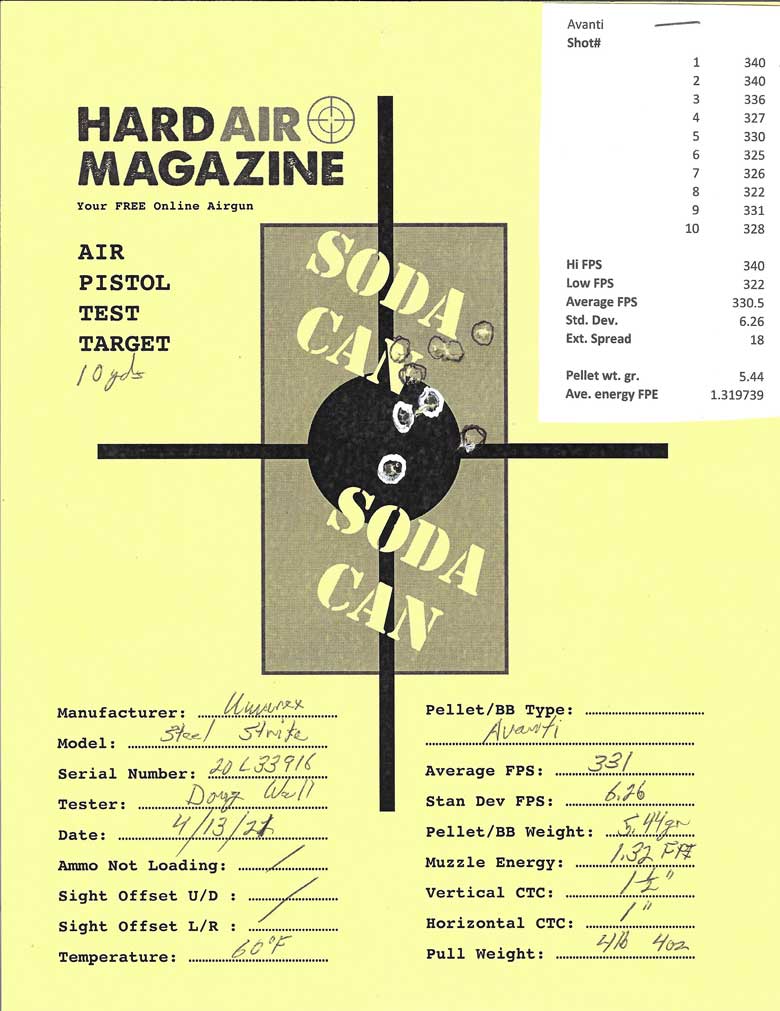 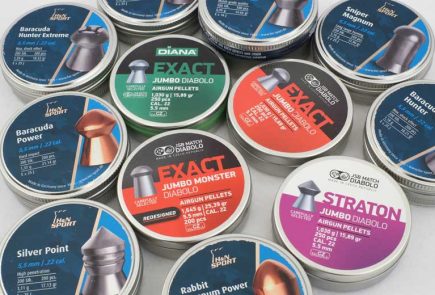 Airgun Pellet Head Diameters. What Should We Expect?