Warning – Distressing Content! PCP Airgun Corrosion – This Is What Moisture Does To Your Air Rifle.

These HAM photographs show how bad the corrosion actually can be. Our heading photograph shows a corroded Marauder gauge port. Look and be warned!

Note that our photographs happen to show corrosion in Benjamin and Crosman airguns. That’s because these are examples we have been supplied by a Crosman Repair Center. But every PCP airgun – not just Crosman/Benjamin models – suffers from this problem.

You can find PCP airgun corrosion in any make of airgun! 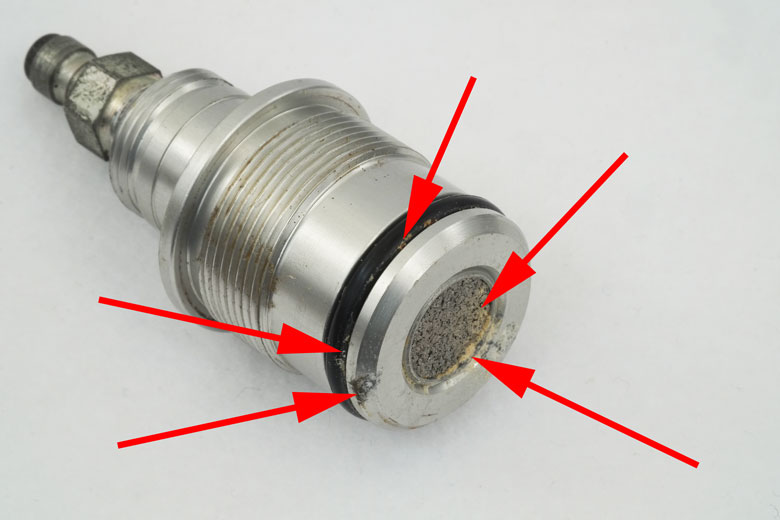 Above. There’s plenty of corrosion on this Marauder fill adapter. You can also see oxidization build-up on the sintered filter.

Every time you fill your PCP airgun without a dessicant system of some sort, you are causing this problem. You’re actually pumping water vapor – moisture – into the gun every time you fill it with High Pressure Air.

The result is long-term damage to your gun and an expensive repair bill just waiting for you in the future!

Over the long-term – say 3 years or more – PCP airgun corrosion will be the number one cause of failure for PCP air rifles.

First, you find that your favorite PCP is starting to loose pressure between uses. Then the pressure loss becomes more rapid. Then, finally, the gun will no longer hold pressure.

Below. Here’s corrosion on a Discovery gauge port. It’s even inside the gauge adapter (arrow)… 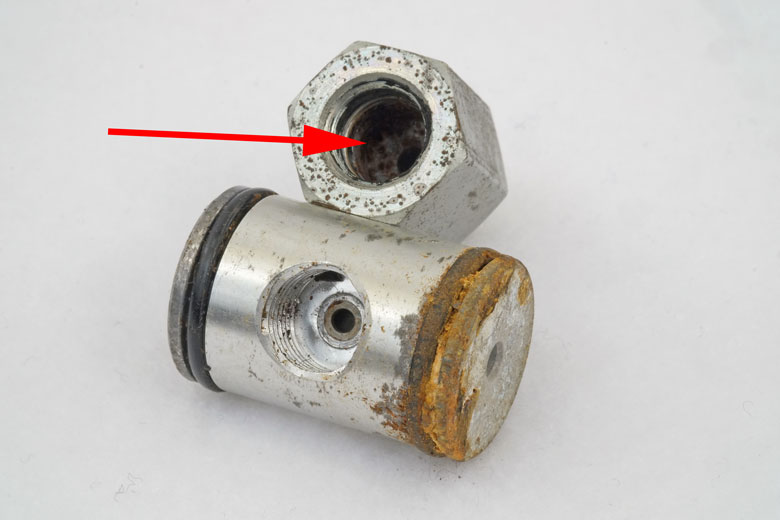 If you have been filling with “wet” air – that is air that has not been passed through some sort of moisture-removal system – it’s guaranteed that your air rifle will have PCP airgun corrosion.

Over the course of time, that water vapor inside your air rifle will cause corrosion. 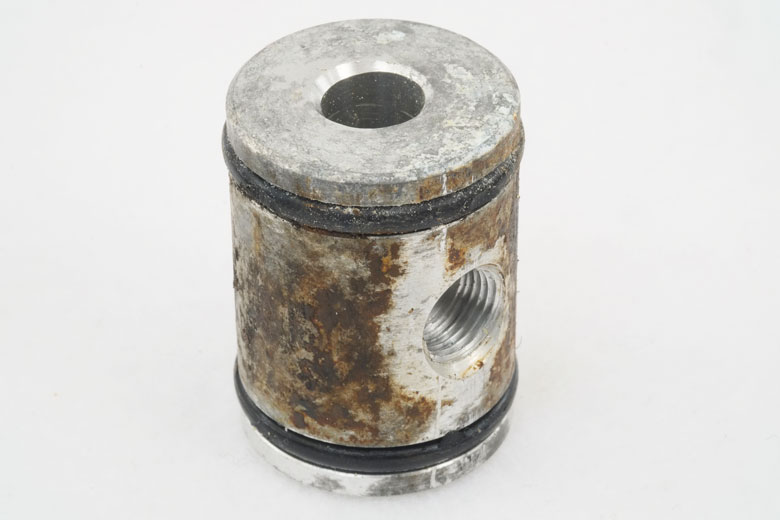 But what actually happens?

Yes, rusting of the HPA pressure tube is one obvious result. If a pressure tube shows any signs of internal rusting, it should be replaced immediately!

You see, the O rings inside the gun seem to attract moisture like a magnet. The result is that rust occurs between the O ring and steel tube – usually in a circular pattern, exactly matching the location of the O ring.

Below. It’s difficult to photograph inside an HPA tube. But you can see both rust caused by the O ring and random rust in this badly-corroded Marauder tube. 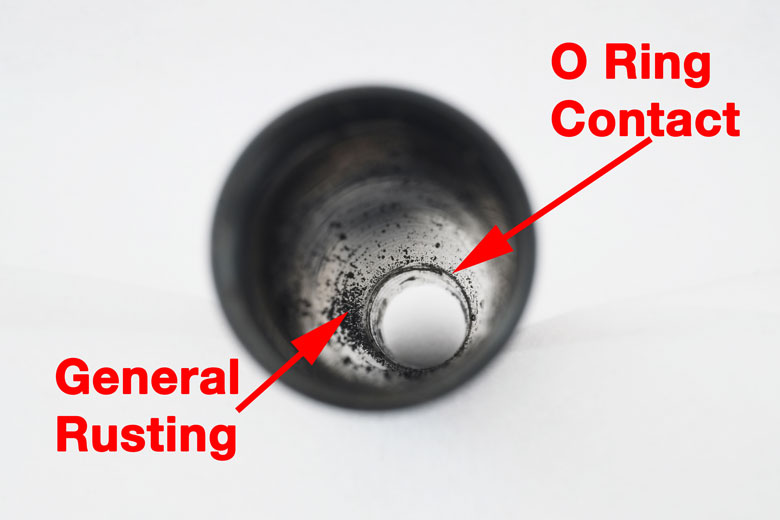 I may be a coward, but the prospect of holding a rusty steel tube containing 3,000 PSI of air right next to my face every time I shoot doesn’t sound too clever. DON’T DO IT!

More surprisingly, perhaps, the majority of PCP airgun corrosion happens on Aluminum parts inside the gun, rather than the steel tube itself.

The high pressure moisture-bearing air causes the Aluminum to oxidize into a white substance. This white oxide then builds-up underneath the O ring seals inside the gun. But it doesn’t build up evenly!

Because the Aluminum oxide builds-up in peaks and troughs, eventually the rubber O rings inside the gun can no longer fill the gaps and leaking starts. It’s downhill all the way from there…

Prevention is better than cure.

The way to prevent – or at least massively reduce – PCP airgun corrosion is to ALWAYS fill your gun with “dry air”.

If you use a hand pump, make sure it is filled with a dessicant system such as this Hill pump has. 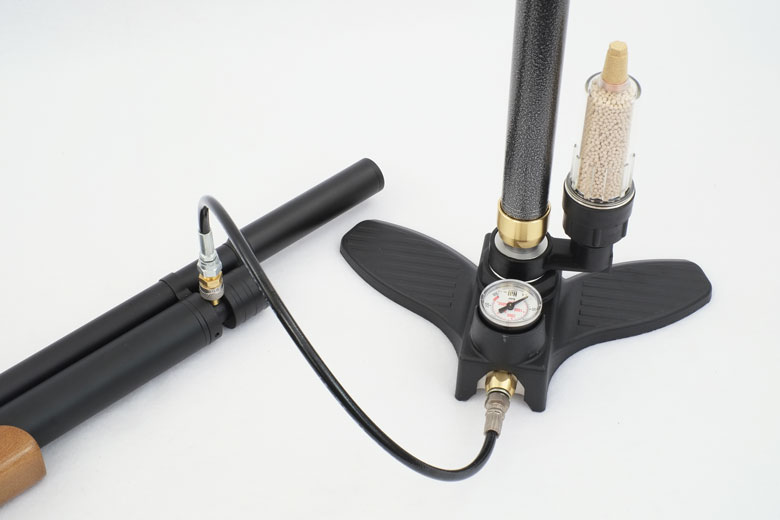 Alternatively, if you fill HPA tanks from a compressor, use a dessicant system – such as this Diablo Air Dryer – between the compressor and the tank. 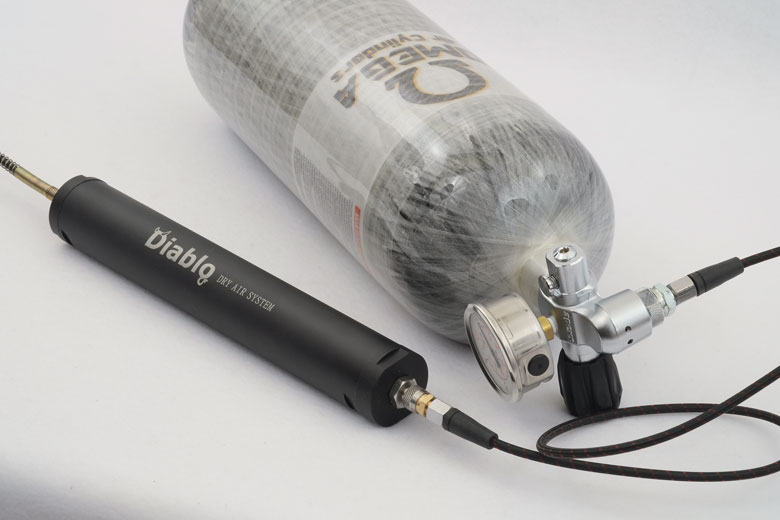 In either case, you also need to monitor the dessicant beads and dry-out or replace them appropriately.

Or if you have your air tanks filled by a paintball store or dive shop, make sure that they are giving you dry air.

PCP airgun corrosion WILL happen to your air rifle unless you always fill it with dry air.