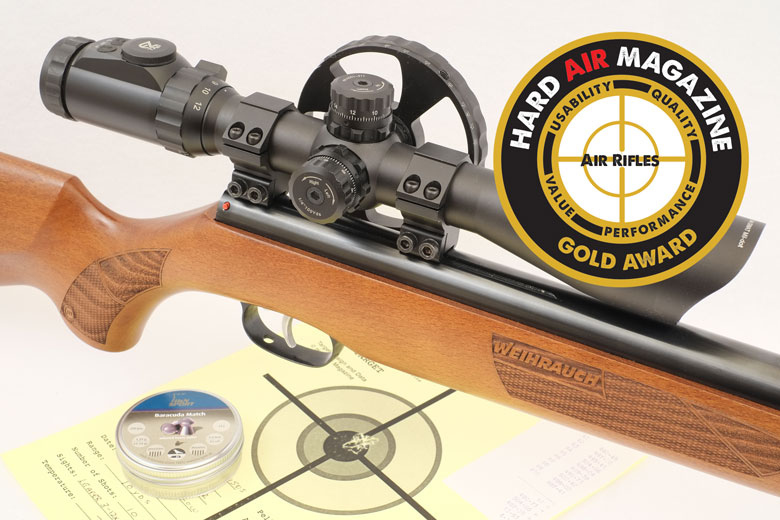 Rather heavy to cock for the power level.
Doesn't achieve 1,000 FPS (But we don't care).
We can't think of anything else!

The Weihrauch HW50S air rifle is close to the perfect spring/piston air rifle.

It offers excellent accuracy, beautiful design and finish and great consistency. It's carbine-like design is short and light. Recoil is very low and it's fitted with the outstanding Record trigger.

Of course, it doesn't play with the many SuperMagnum spring/piston and gas ram air rifles that are priced at $200 less and come complete with a scope. If you need a magnum hunter airgun, this is not the air rifle for you. But if you want to shoot targets, silhouettes, plink and undertake some small pest control, the HW50S demands serious consideration through it's wonderfully-implemented old-fashioned virtues.

85%
HAM Rating
You have rated this
Full Review

At the time of writing this review, the Weihrauch HW50S air rifle could be easily found on sale between $369 and $399. As the choice of scope is left to the user at additional cost, HAM adds $120 to the cost of the gun to make an “average” price for a shooting configuration. This makes the “Street Price” for a typical scoped HW50 about $500.00.

For this price, the competition comes mainly from other high-end German spring/piston models and, primarily, from PCPs. Considerably more power is available at considerably lower prices from a whole raft of other break barrel air rifles from multiple manufacturers.

So the HW50 is completely overwhelmed by the competition in specifications and price. If you want the maximum bang for the buck, the HW50S is not the gun for you.

But if quality, accuracy, consistency, easy shooting and a superb trigger are the focus of your interest in air rifles, the Weihrauch HW50S delivers a strong value proposition. If this matches your definition of value, you will love the HW50S!

muzzle velocity for the Weihrauch HW50S air rifle tested by HAM peaked at 799 fps. This is a .22 caliber model, don’t forget: the .177 version would shoot significantly faster.

This muzzle velocity – obtained with Gamo Raptor Platinum 9.7 Grain alloy pellets – was combined with a peak muzzle energy of 13.74 Ft/Lbs.

So, the HW50 is not a screaming powerhouse. However, it does deliver a very usable level of speed and power that’s really sufficient for plinking, target shooting and some small game airgun hunting.

Accuracy was simply outstanding. Just look at the targets below!

The Weihrauch HW50S air rifle tested by HAM was not at all pellet-picky. It shot every one of the HAM standard pellets very well, or better. Accuracy was just about perfect with the RWS Hobby 11.9 Grain wadcutter pellets. These produced a genuine “one hole” group from HAM tester Paul Manktelow’s shooting. And the groups from other pellets were very close to this level, too.

Of course, the Weihrauch HW50S air rifle is fitted with Weihrauch’s legendary Rekord trigger. This gave its usual superlative performance in this gun, with an average pull weight of a comfortable 2 Lb 10 Oz.

But it’s the quality of the trigger pull that makes the Rekord trigger so special.

As HAM tester Paul Manktelow noted “the trigger is so smooth I tended not to think about it”. The first stage is very light. There’s a definite “feel” when the second stage is reached – it’s very predictable – just what’s required for consistent, repeatable accuracy. Somehow it feels as if no further effort is required to release the sear, the gun just fires exactly when wanted. That’s excellent performance! 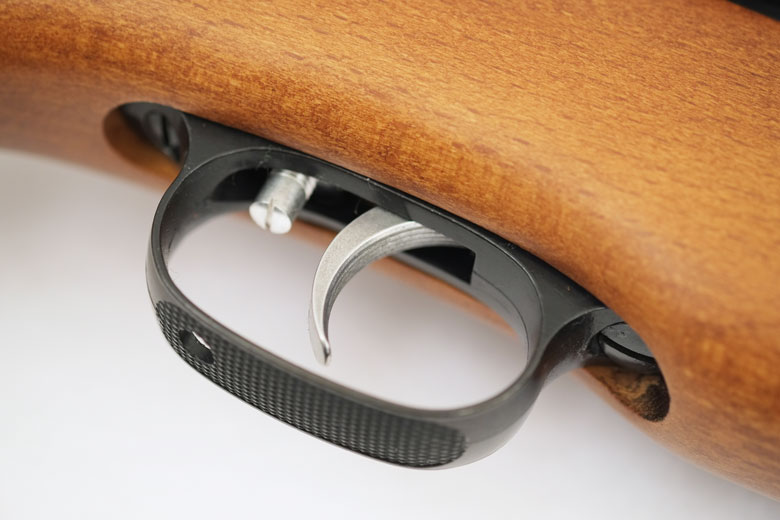 Cocking effort for the Weihrauch HW50S air rifle is fairly stern at 29 Lbs. In itself, this is not a very high cocking effort, but it’s quite high compared to the power of the gun. This is probably due to the short barrel. It’s just 15.5-inches long.

The chisel detent locking system worked well and provided a definite lock up when the barrel was swung back into place after cocking.

As it’s his personal air rifle, Paul Manktelow subsequently added a muzzle weight to the barrel. He reports that this lengthened the effective length of the barrel and makes the cocking effort feel significantly less. Paul finds that a firm, quick throw is the best way to cock the HW50S.

The manufacturer makes the absolute minimum of claims for the Weihrauch HW50S air rifle.

The first claim is that it has a “match” trigger. The Rekord trigger is superb: we agree!

Muzzle velocity for the .22 caliber version is claimed to be just 524 fps. The Weihrauch HW50S air rifle tested by HAM exceeded this claim extravagantly, with all except the heaviest H&N Baracuda Match pellets.

Finally, Weihrauch claims solid construction – yes! – and excellent accuracy for the HW50S. One look at the HAM test targets confirms the accuracy claim too.

The Weihrauch HW50S air rifle tested by HAM produced excellent consistency in many aspects of performance.

Accuracy was very good or better with the entire range of HAM test pellets. This means that the HW50S is not a pellet-picky air rifle and will shoot well with pretty much any type of pellet. Note that, unusually, the lead-free pellets also performed well in this gun. The point of impact on the target with different pellets also varies less than is often displayed by other air rifles. This is another, and unusual, aspect to consistency with the HW50S.

Standard Deviation, the measurement of variation in shot-to-shot muzzle velocity, was also very well controlled with an average of just 5.68 fps across the entire test. This is an outstandingly low figure, particularly for a spring/piston air rifle.

Trigger pull weight was also very consistent on the Weihrauch HW50S air rifle tested by HAM. The average pull weight of 2 Lb 10 Oz only varied by plus or minus 3 Ounces in the extremes we recorded under test.

It’s also noticeable that Muzzle Energy (the “hitting power” of the gun) was also very consistent at just under 12 Ft/Lbs for lead pellets and 13 1/2 Ft/Lbs for alloys. It’s unusual for spring/piston air rifles to demonstrate such consistency of power output.

The report of the Weihrauch HW50S air rifle was about as expected. As this is not a high powered spring/piston airgun, the noise level was not very high. Of course the HW50S is not fitted with a silencer, so it’s nowhere as quiet as a Benjamin Marauder – for example – but the HAM team felt subjectively that it was definitely backyard-friendly in sound output.

The shooter of the Weihrauch HW50S air rifle was aware of a slight “bonk” sound during the firing cycle, similar to that found with some Air Arms TX200 airguns. But this was not heard by bystanders and was not considered to be objectionable.

The Weihrauch HW50S air rifle is equipped with iron sights. The front sight is a “tunnel”-type sight which provides the ability for the shooter to interchange front sight elements as desired. As you can see from the photograph below, this front sight clamps in place onto dovetail rails machined in the barrel. This allows the front sight to be removed if required – to prevent the “shadow” that would be seen through a scope used at low magnification, for example. 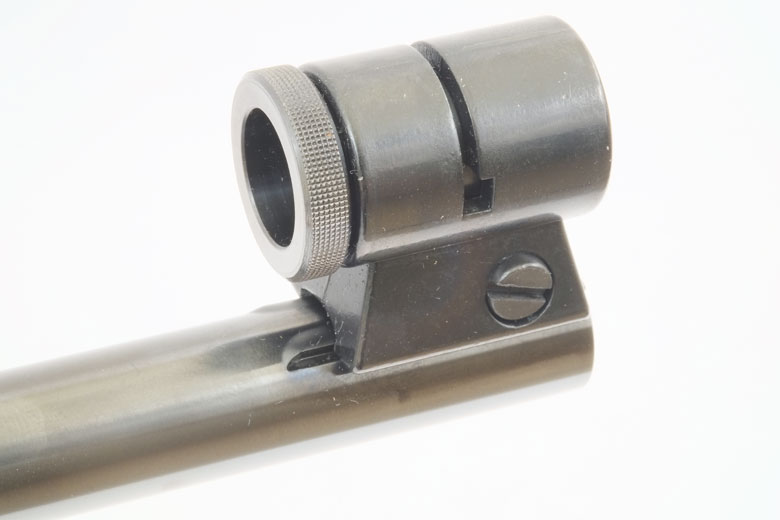 Rear iron sights have the expected click adjustments for elevation and windage. Unusually, the rear sight has four different notches and five inserts of different styles are supplied for the front sight. This gives the HW50S an unusually-wide range of open sight permutations, compared to most other air rifles. The rear sight assembly is mounted on the barrel breech block, of course.

For this test review, HAM tester Paul Manktelow fitted the Weihrauch HW50S air rifle with his own Leapers Accushot 3-14×44 SWAT scope. This sidewheel scope fitted well onto the HW50S and made a good combination. Paul plans to campaign with this rig in Silhouette shooting competitions. Judging from the test target he produced when testing this air rifle, he should do well with this combination!

There are three stop screw holes machined into the top of the compression tube, giving a variety of options for scope positioning, while also resisting rearward movement under recoil. 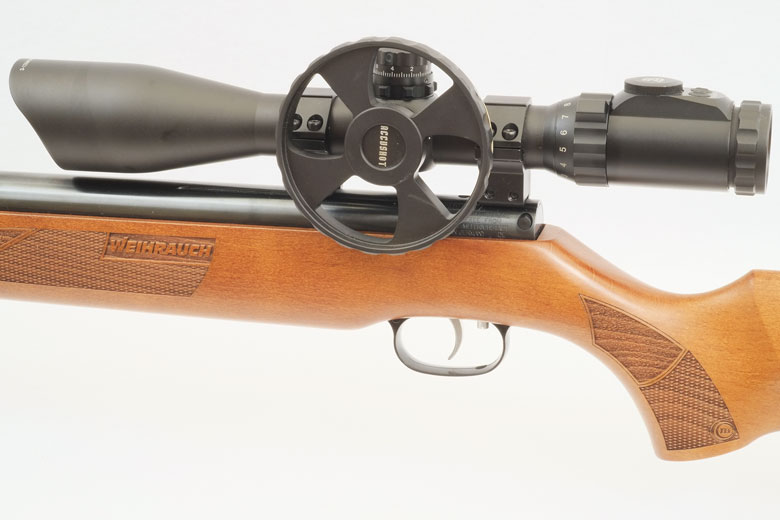 As a short, light – almost carbine length – airgun, the Weihrauch HW50S air rifle is comfortable to shoot. All-up weight including the Leapers 3-12 x 44 scope is still only about 8.4 Lbs, which is certainly not excessive.

The automatic safety is prominent at the rear of the compression tube and is disengaged by pushing from the left of the gun. 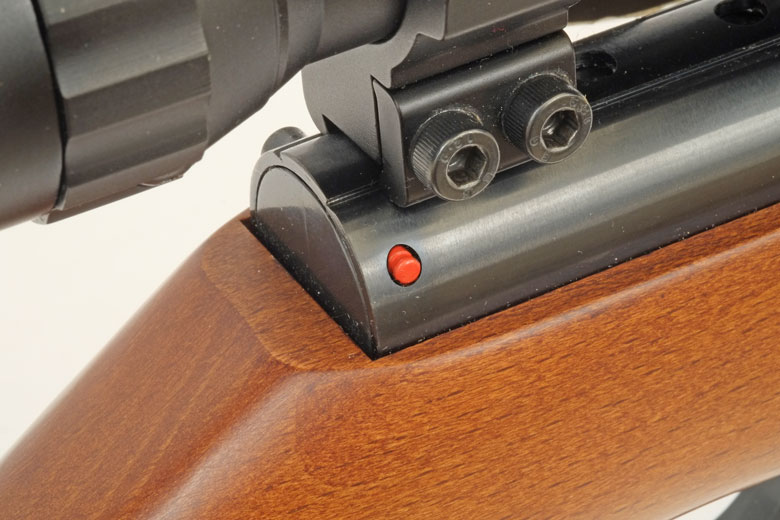 The overall combination of mild recoil, excellent trigger and tolerable cocking effort makes the Weihrauch HW50S air rifle the sort of break barrel airgun that could be shot all day with comfort. This is confirmed by its very low (= good) RateAGun shootability score of just 8.0. This is very good for any spring/piston air rifle.

The HW50S tested by HAM showed good hold-tolerance, it wasn’t too picky about how it was held for shooting. This also contributes strongly to the good shootability rating this air rifle turned-in on test.

Metalwork is polished and has a deep, even blued finish on the Weihrauch HW50S air rifle. This quality appearance is complemented by an Italian, Minelli-manufactured, hardwood stock.

The stock has a smooth overall finish with well-executed checkering on the forend and stippling around the wrist. 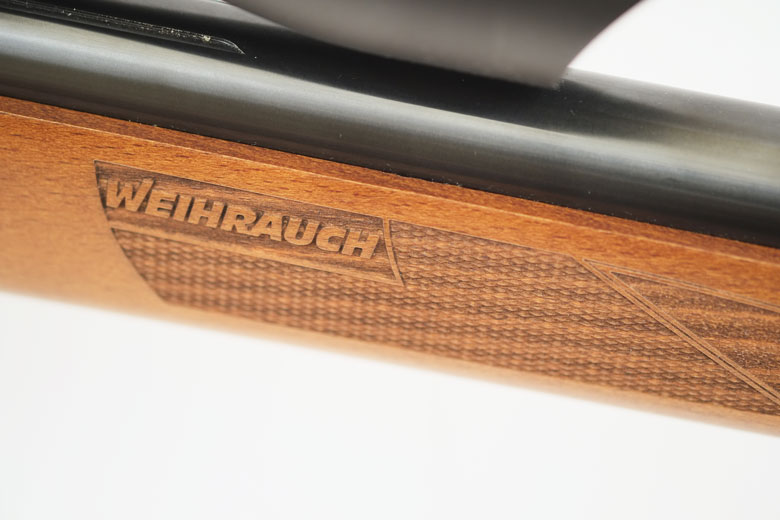 Overall, the finish of the HW50S is to a high standard and gives the aura of quality. Appearance is definitely traditional, with no concessions to modern style or trends. This is a classic wood and metal air rifle, “just like they used to be” with no plastic in sight. Some will like this, others not. The HAM team loves it!

The Weihrauch HW50S air rifle is not widely available in bricks and mortar stores. However, it’s readily obtained online from specialist airgun dealers such as Airgun Depot, Airguns of Arizona and Pyramyd Air.

At the time of writing this review, there’s some variability on the price being asked for the HW50S. So it’s best to check around if you don’t have a “preferred” airgun supplier.

One other thing to notice is that Pyramyd Air and Airgun Depot (for example) indicate a 12-month warranty with the HW50S, while Airguns of Arizona offers a “Limited Lifetime” warranty for the product.

As remarked elsewhere in this HAM review, the Weihrauch HW50S air rifle we tested shot every type of pellet very well, so Crosman Premier pellets from your local Walmart are likely to be just fine.

As a traditional spring/piston air rifle, maintenance is minimal and, of course, there’s no need for charging equipment as there is with a PCP. Just don’t leave the spring cocked for any length of time!

The instruction manual provided with the HW50S covers multiple models in German, French and English. There’s a great deal of warning material provided. But this is a very simple air rifle and complex operating guidance is not required, just the good dose of common sense that’s inherent to using any airgun. 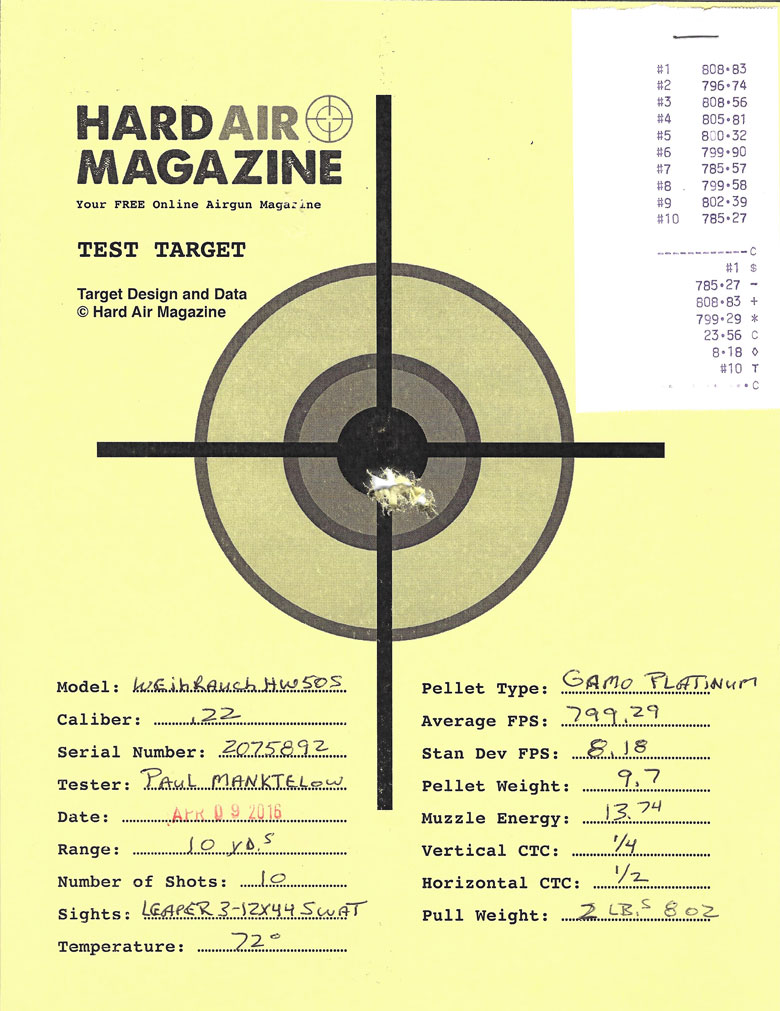 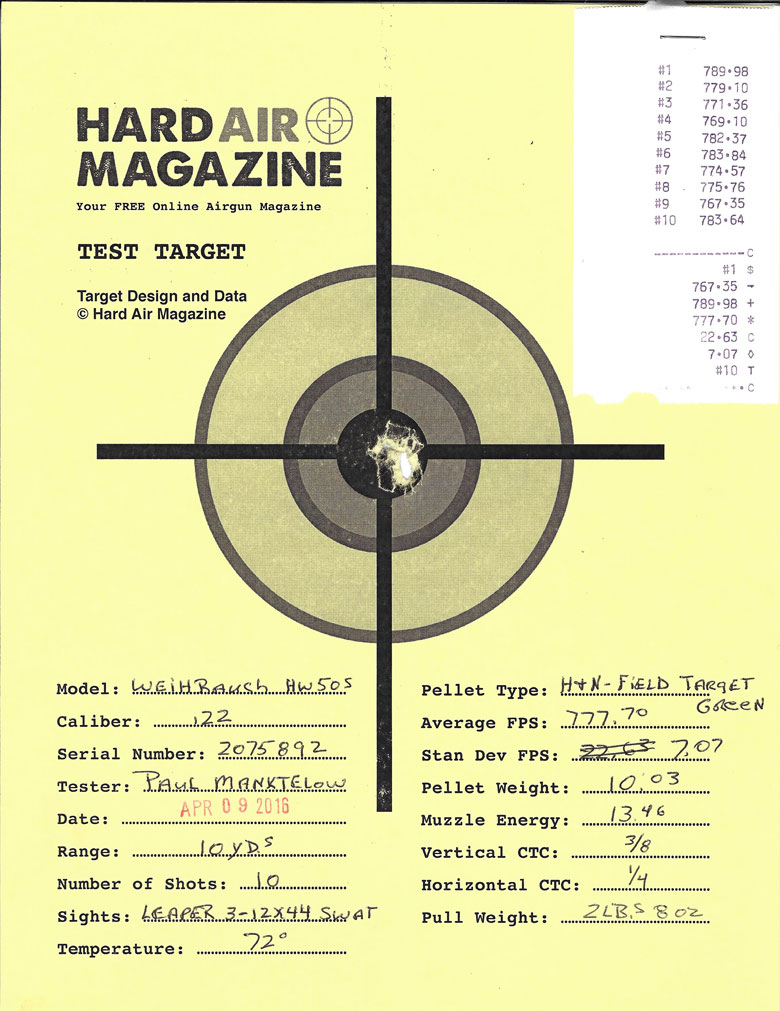 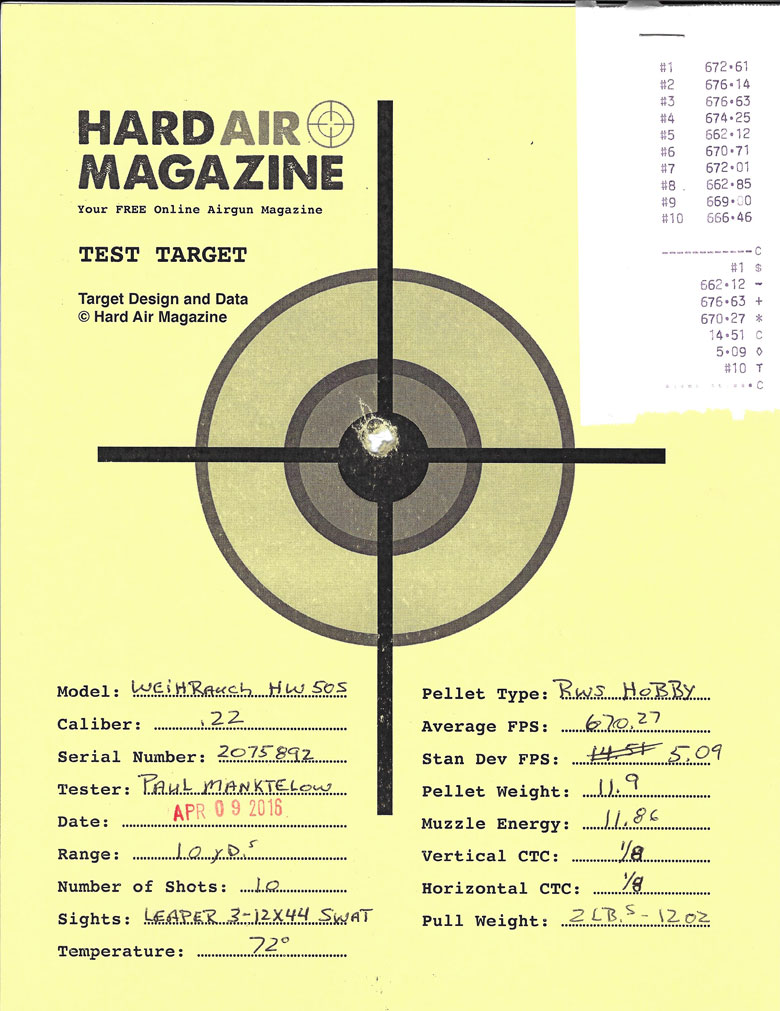 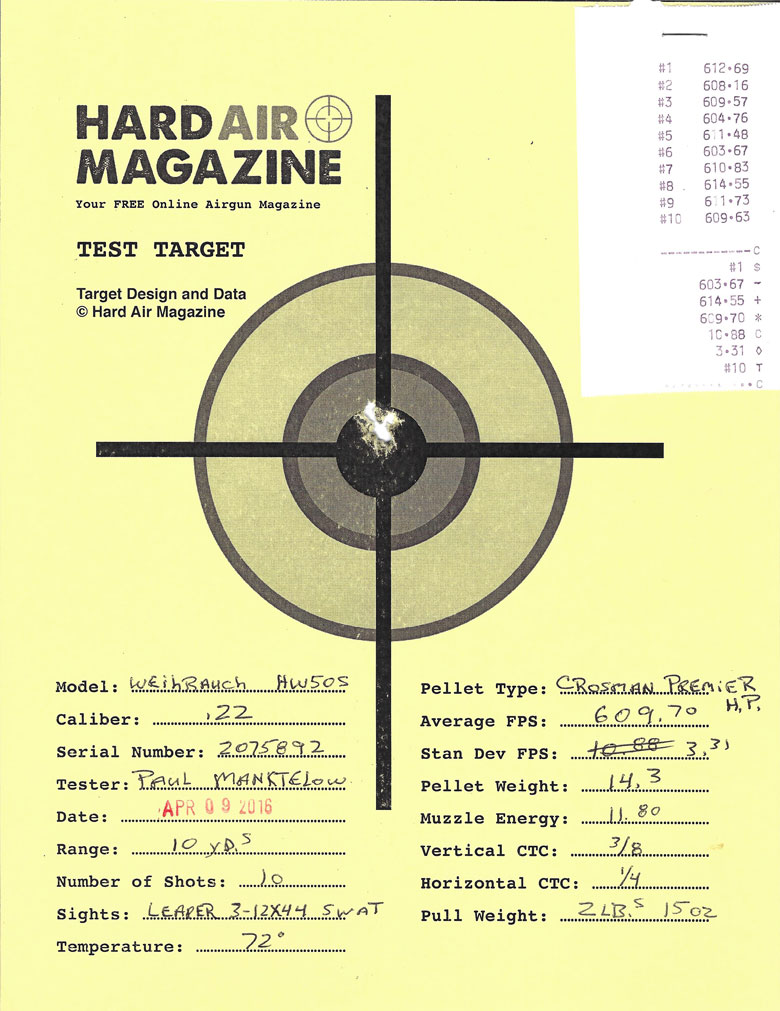 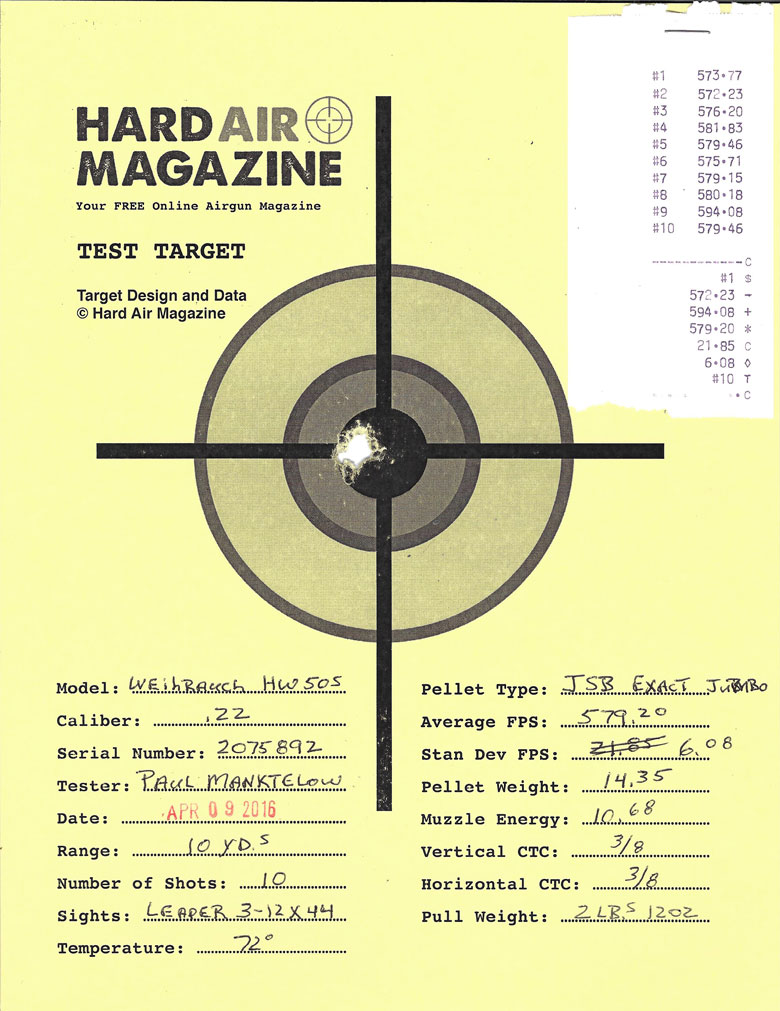 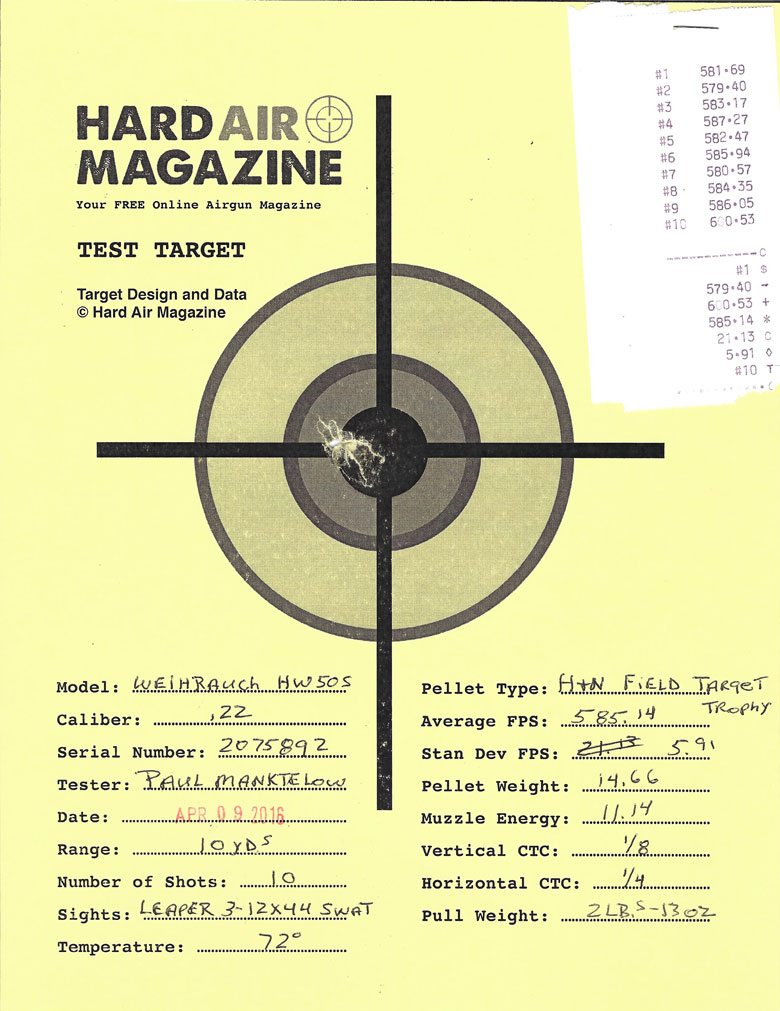 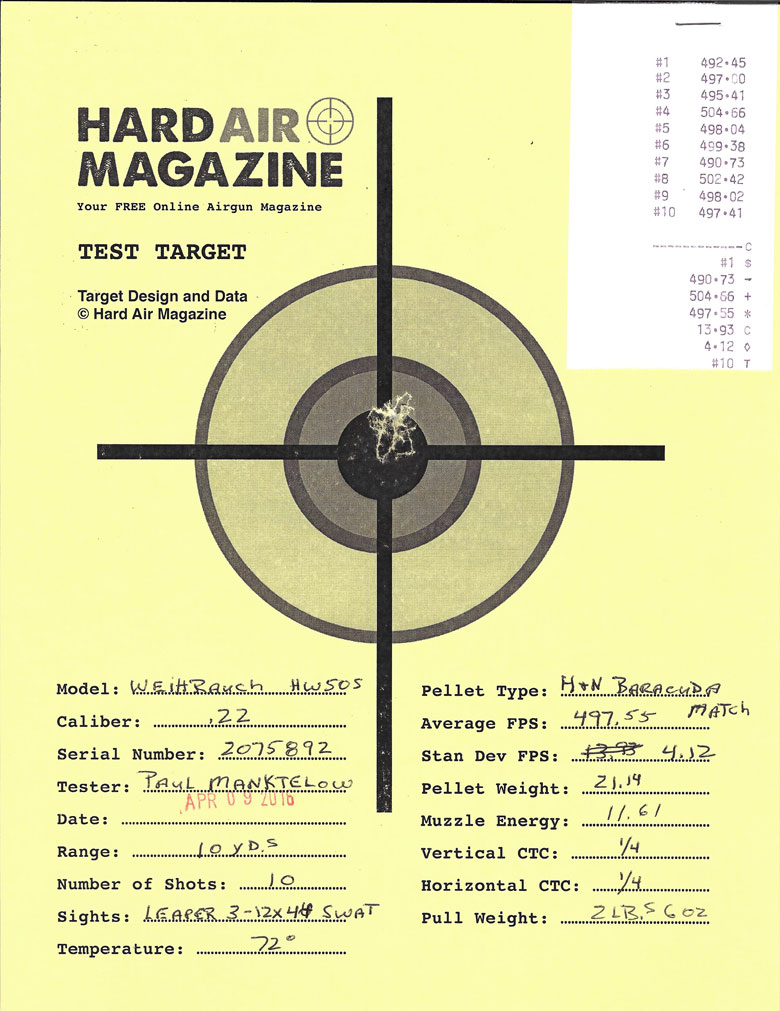