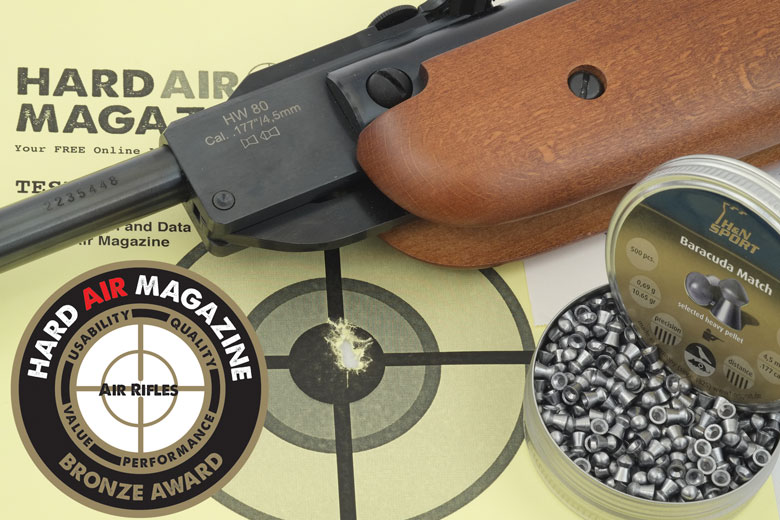 The Weihrauch HW80 air rifle is for the experienced airgunner who understands spring/piston air rifles and how to shoot them. It's also for the person who appreciates quality and is not seduced by everything that's new and shiny. Furthermore, it's for the person who knows how to be patient as the gun settles-in over time.

Also this is a big, heavy gun. You need to be big enough to cock and shoot it too!

If this description matches you, the HW80 could very well be the gun for you. It easily earns a HAM Bronze Award.

81%
HAM Rating
You have rated this
Full Review

The Weihrauch HW80 air rifle is one of the – now relatively rare – breed of “quality first” spring/piston-powered break barrel air rifles. It makes no attempt to compete with other products claiming “Zillion FPS” Muzzle Velocities or with a marketing name – and acronym – for every part of the gun.

And yes – at a Street Price of $530 plus scope – it’s not exactly cheap. Quality never was…

This traditional, dare we say old-fashioned, approach still has plenty of fans. However they will be those who are experienced airgun shooters who know what to look for and feel no need for the “latest and greatest”.

This – the HAM Team believes – means that the Weihrauch HW80 is somewhat of a polarizing airgun. For those wanting an understated, “quality first” spring/piston air rifle. And for those who have the skill to shoot it well, this is a no-brainer choice. We make our Value For Money assessment on this basis.

But those who prioritize price, features and FPS will probably wonder what the excitement is about.

The Gamo Raptor Platinum pellets – the lightest in the standard HAM test suite – “only” achieved 1084.80 FPS, probably because they were a little undersized for the barrel.

The maximum Muzzle Velocity with lead pellets was achieved, of course, with the 7.0 Grain RWS Hobbys. This was an average of 944.71 FPS over 10 shots.

With the exception of the H&N Field Target Trophy Green, the Weihrauch HW80 air rifle gave Muzzle Energies between about 12.5 and 13.5 Ft/Lbs.

The 10.65 Grain H&N Baracuda Match pellets were the most accurate on test, giving excellent results.

Overall, there was a slight but definite tendency for the Weihrauch HW80 air rifle tested by HAM to vertical stringing on the target. We did, of course, check that all the screws were tight. And the lock-up felt good, too.

However HAM Tester Eric Brewer, an experienced and FT match-winning springer shooter was very happy overall with the accuracy he achieved with the gun, as you can see by his comment on the test target below! 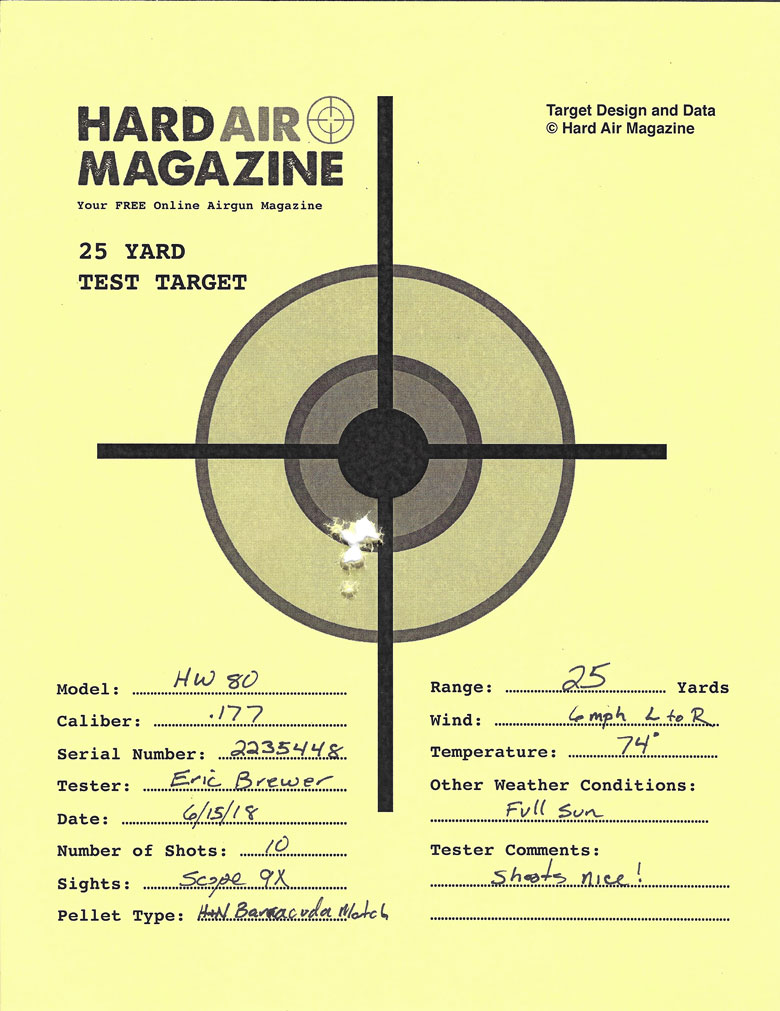 Of course, the Weihrauch HW80 air rifle is fitted with the famous Rekord trigger. This two-stage trigger is adjustable for first stage travel and trigger creep by removing the stock. However that prominent screw behind the trigger blade allows the user to adjust pull weight.

Due to the design of the Rekord trigger, both first and second stage pull weights are adjusted at the same time by the same screw. As always, we tested this Weihrauch HW80 air rifle with the trigger as set by the factory. 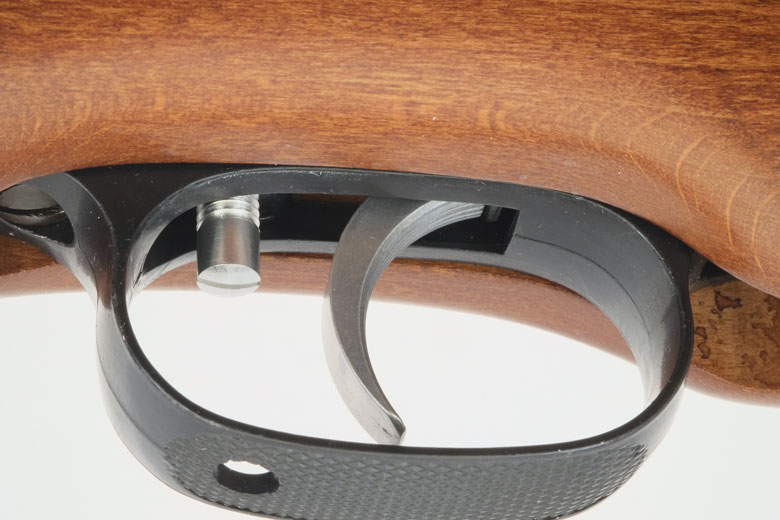 HAM Tester Eric Brewer noted that the Weihrauch HW80 air rifle is heavy to cock, as you would expect for a magnum-grade air rifle of this power. However, the cocking action was smooth and consistent. It was also aided by the long barrel.

We measured the cocking force as 34 Lbs. Precisely the same as claimed on Pyramyd Air’s website.

The manufacturer’s web site give the maximum Muzzle Velocity of the Weihrauch HW80 air rifle as 968 FPS. This is very close the FPS of the test gun using 7.0 Grain RWS Hobby pellets. It was far exceeded by the he lighter, 5.56 Grain, H&N Field Target Trophy alloys which zoomed out at 1109 FPS.

So, there’s no question about it, the Weihrauch HW80 air rifle exceeds the manufacturer’s muzzle velocity claim by a significant amount.

Weihrauch also claims that the HW80 is: “Probably the best break-barrel air rifle available, often classified as ‘the work-horse’. The robust construction, the excellent accuracy and the powerful mainspring guarantee an extraordinary efficiency and penetration power especially at longer distances.”

Is the Weihrauch HW80 the best break barrel air rifle available, as Weihrauch says? Well, it certainly was and still may be.

However, there was clear competition from the Walther LGV Competition Ultra – which shot more accurately for the HAM Team when on test – but was $170 more expensive and is now discontinued. And the forthcoming SIG SAUER ASP20 may be a strong competitor in future.

So, yes, the Weihrauch HW80 probably is the best break barrel air rifle available today – as the manufacturer says.

The Weihrauch HW80 air rifle tested by HAM displayed good consistency. The average Standard Deviation – shot to shot variation across a string – was 15.04 FPS across the standard range of HAM test pellets. It fell to 9.43 FPS for the H&H Baracuda Match pellets which performed best in this gun.

Although this is not the best consistency of FPS for a spring/piston air rifle we have recorded in HAM testing to date, we would expect this to improve with further use.

The average Muzzle Energy was very consistent for a spring/piston air rifle, however. It varied between about 12.3 and 15.2 Ft/Lbs, with the majority of the pellets coming-in at around 13 Ft/Lbs. This is a tighter spread than we normally encounter.

The trigger pulled at an average weight of 3 Lbs 2 Oz. That’s very, very close to that of other Rekord triggers on Weihrauch-manufactured air rifles tested by HAM in the past, such as the HW97K and the Beeman R9. Of course, there’s inevitably some variation between any manufactured items of “the same” product and that’s what we are seeing here. Such variability is obviously well controlled by Weihrauch. It’s part of the reason for the relatively high price for the Weihrauch HW80 air rifle.

However, the variation between the heaviest and lightest pull weights we recorded of about +/- 12 Ounces was a little larger than we have recorded with the other Rekord triggers tested by HAM. Again, we would expect this to improve with use.

As a traditional, un-slienced air rifle, the Weihrauch HW80 air rifle gives an average level of report, appropriate to its power level.

Note that the ultra-light, alloy pellets were distinctly LOUD, however! This is because they traveled at the Speed of Sound (around 1,100 FPS) and so produced a sonic boom. No silencer or shroud would make any difference to this noise level, it’s simply a function of the velocity achieved by the ultra-light pellets from this magnum air rifle.

Lead pellets did stayed under the Speed of Sound and so were much quieter. And, of course, this issue would not apply to larger calibers where the maximum Muzzle Velocity would be less than 1,100 FPS.

There are plenty of airgunners who like to shoot using iron sights. For these people, the Weihrauch HW80 air rifle is a joy because it’s fitted with a serious set of traditional open sights. There’s not a fiber optic element to be seen!

The rear sight is click-adjustable for elevation and windage, of course. 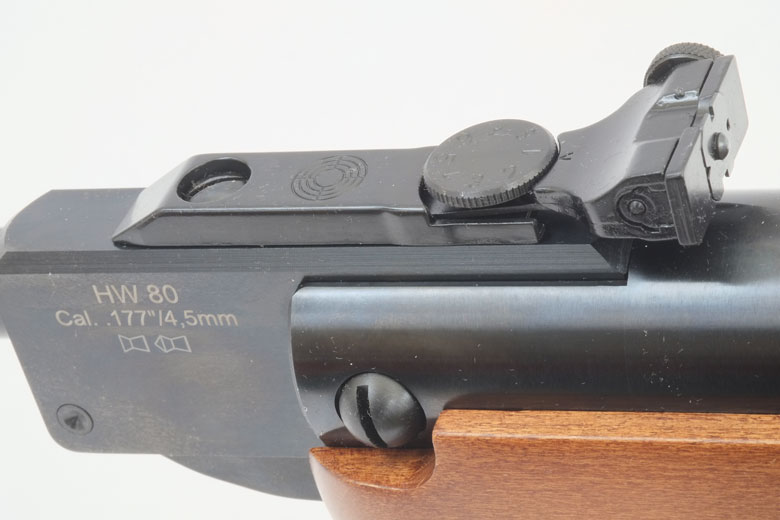 The front sight comprises a hooded housing with interchangeable elements. 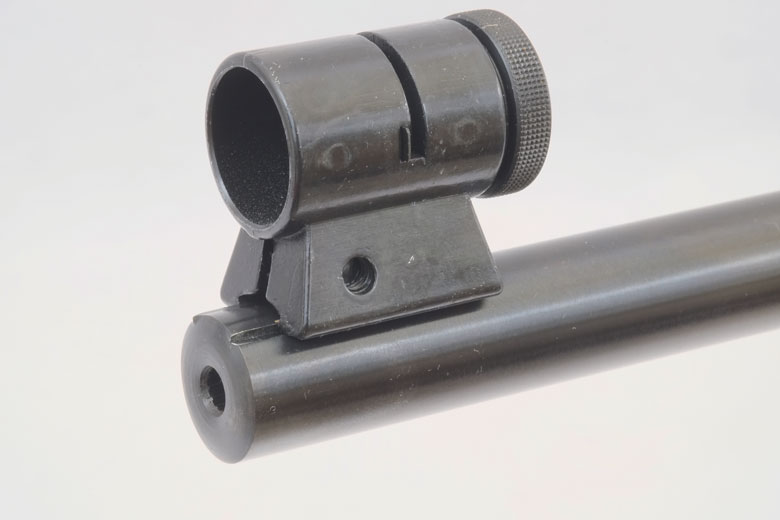 In fact, the manufacturer includes no less than six different interchangeable elements. These are easily interchanged and give the owner a wide variety of options for open-sight shooting. 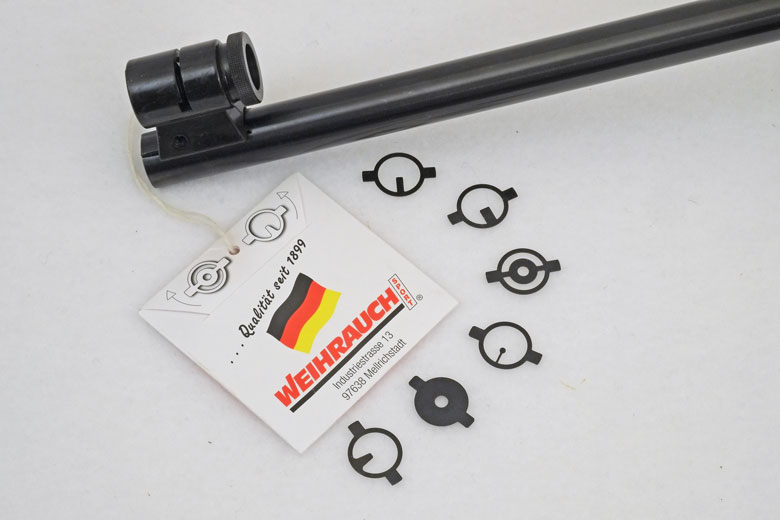 Naturally, the Weihrauch HW80 air rifle can also be fitted with a scope. The rear of the compression tube is machined with standard airgun rails and there’s no less than three deep scope stop holes. These allow for flexibility in scope mount positioning based on scope size and the user’s eye relief requirements. 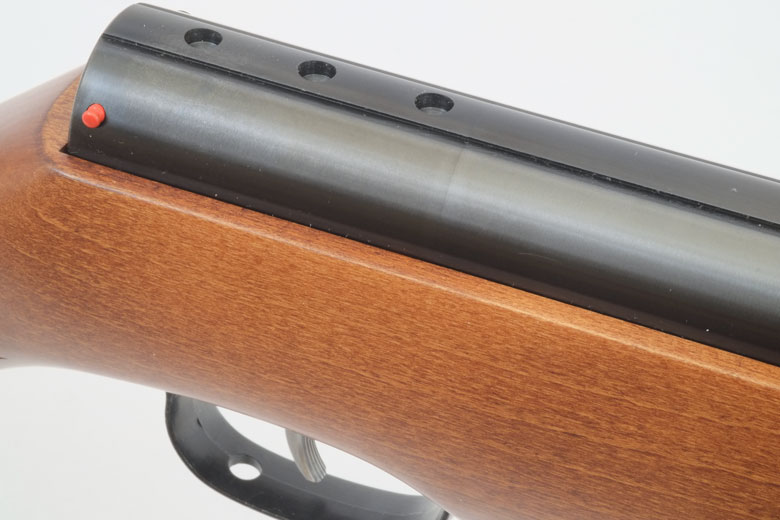 We mounted an MTC Mamba Lite 4-16 x 42AO scope for this test review and it worked well with the HW80. 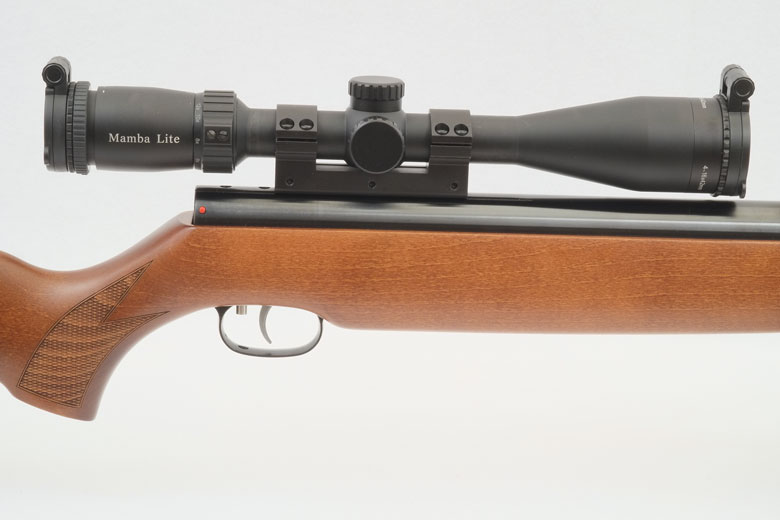 Using a Leapers/UTG one piece mount, the Weihrauch HW80 air rifle tested by HAM displayed no tendency for barrel droop and was easy to sight-in. Very good!

The Weihrauch HW80 air rifle has a simple, classic design. The stock is simple yet comfortable. Although there’s no modern touches such as an adjustable comb to the stock, it was comfortable for the HAM testers to shoot. Note that the HW80 has a stock design that favors right-handed shooters with it’s cheek rest.  However it can be shot by left-handers also.

The stock is fitted with a comfortable rubber recoil pad and this aids in taming the not inconsiderable recoil of the Weihrauch HW80 air rifle. 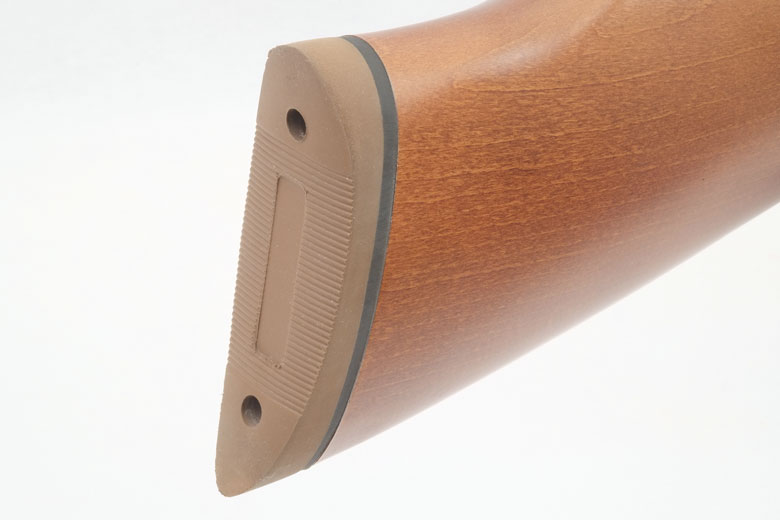 HAM Tester Eric Brewer noted in his notes “The HW80 has a strong jolt when the piston comes forward. It feels fast because it is fast!” This pronounced forward recoil means that mastery of the “artillery hold” is required to achieve good, consistent accuracy – as you would expect. That makes the Weihrauch HW80 air rifle a gun for the experienced shooter.

Unlike many spring/piston or gas ram air rifles, the Weihrauch HW80 air rifle reviewed by HAM showed no evidence of dieseling at any stage during the test.

Eric’s estimation was that consistency and feel would certainly improve further with an extended break-in period of use. However he also was very clear that the HW80 was smooth straight out of the box. He was also impressed with the lack of twang from the spring.

The Weihrauch HW80 air rifle is a solidly-built air gun and the weight reflects that. The all-up weight of the test gun and scope was 10 Lbs 13 Oz. This, combined with the heavy pull and long overall length of 45.25 Inches, means that the HW80 is best-suited to a strongly-built shooter. This is not a kid’s gun!

The finish and appearance of the Weihrauch HW80 air rifle tested by HAM was very nice indeed!

The HAM Team likes the simple, classic design of this gun. We like the traditional wood stock, with it’s beautifully-executed checkering around the wrist. 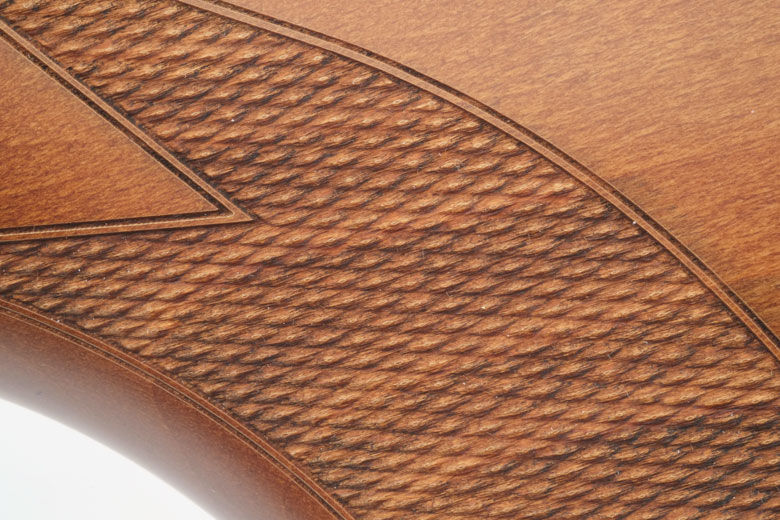 We also like the deep – almost black – effect of the blueing and the perfect, polished finish of the metal parts. This is typical for all the Weihrauch-manufactured airguns HAM has ever tested.

The Weihrauch HW80 air rifle is something of a specialist’s airgun in today’s market. This means that it’s not very widely distributed. However, it is readily available online from Pyramyd Air and other premium airgun dealers.

Although this is a long air rifle, you may need to remove the iron sights if you have a very long scope with flip-up lens cap. As you can see below, the MTC Mamba Lite scope we mounted fitted – just! But it’s easy to remove both front and rear iron sights if required to mount a longer scope. 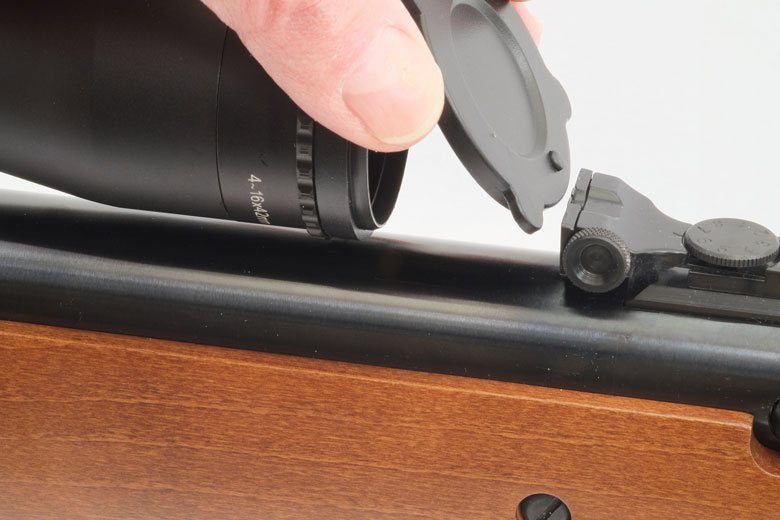 The manufacturer supplies a generic instruction manual for the Weihrauch HW80 air rifle. This is in English, German and French and contains a huge amount of information. As is always the case with such manuals that cover multiple products, it’s somewhat confusing to understand, however. There’s also a separate booklet – in English only – of additional warnings and tips.

And in common with any powerful break barrel air rifle, you’ll need to check the stock screws regularly and tighten them as appropriate. These screws are inevitable loosened by the recoil. If they’re not tightened, accuracy will suffer. 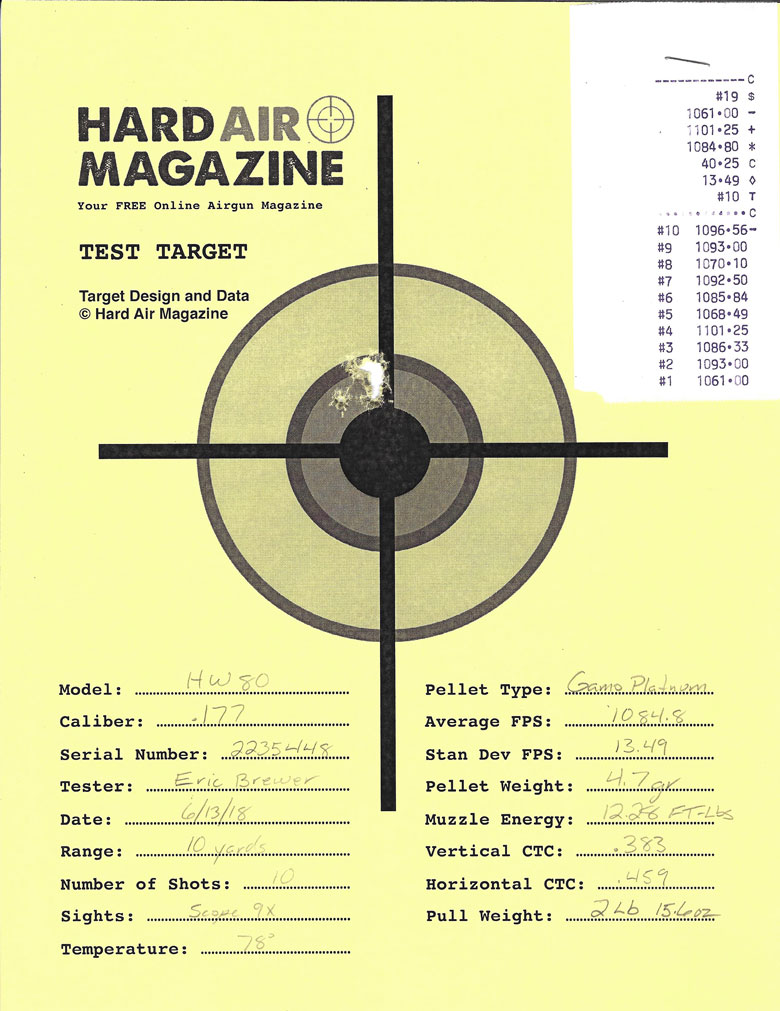 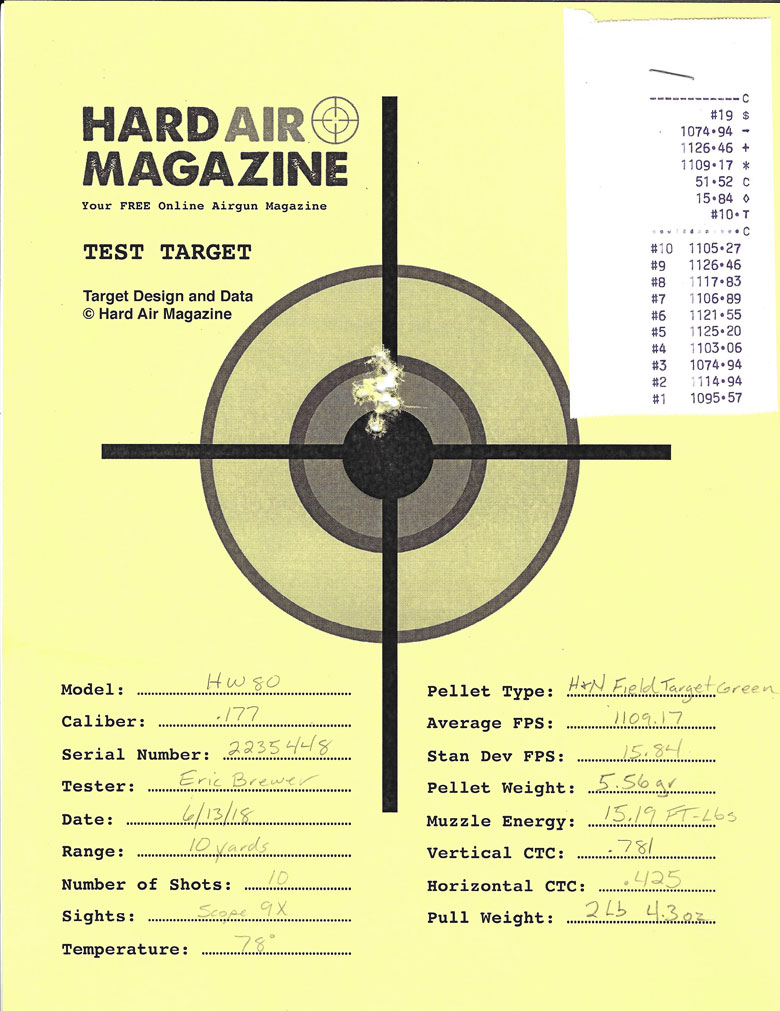 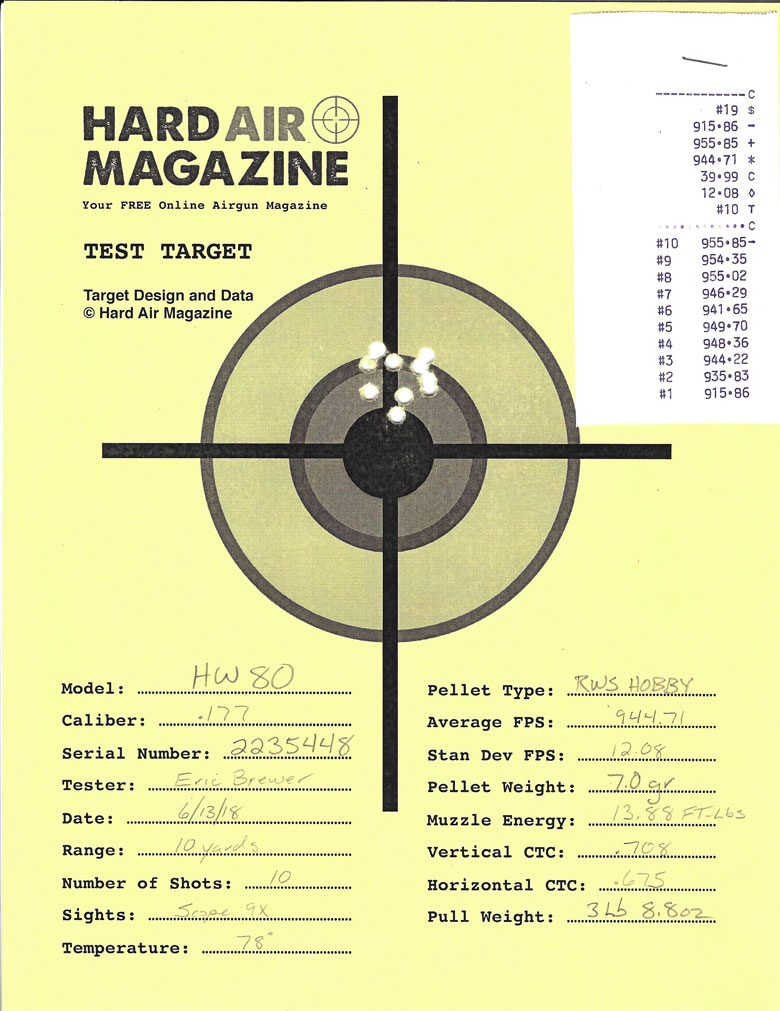 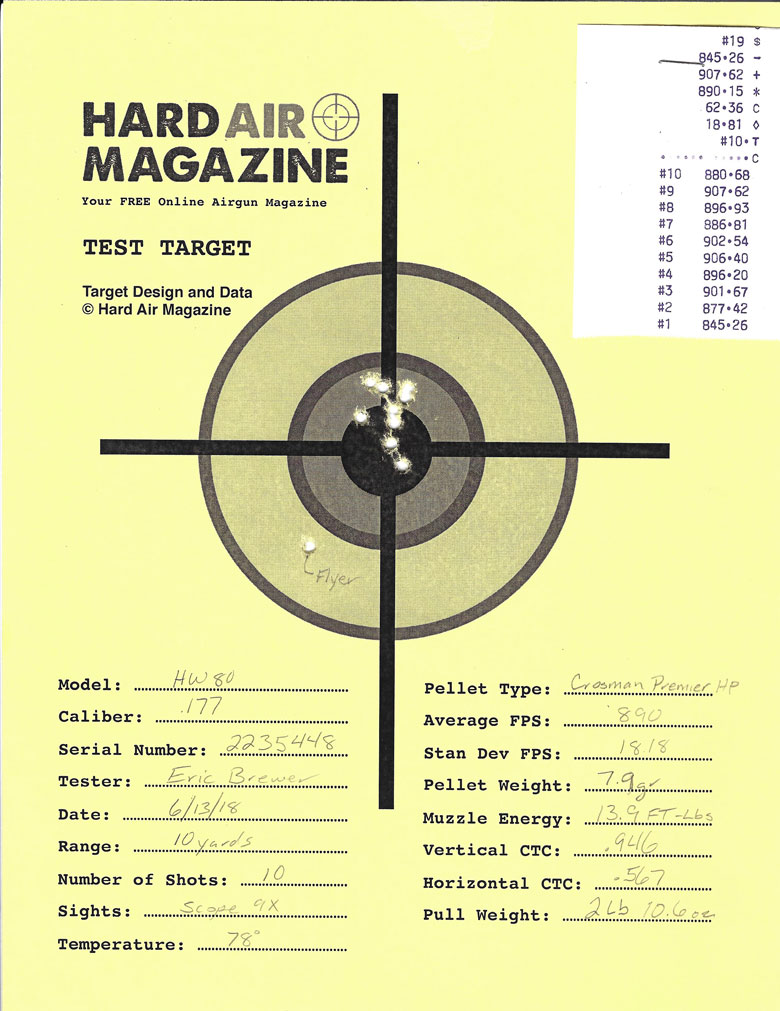 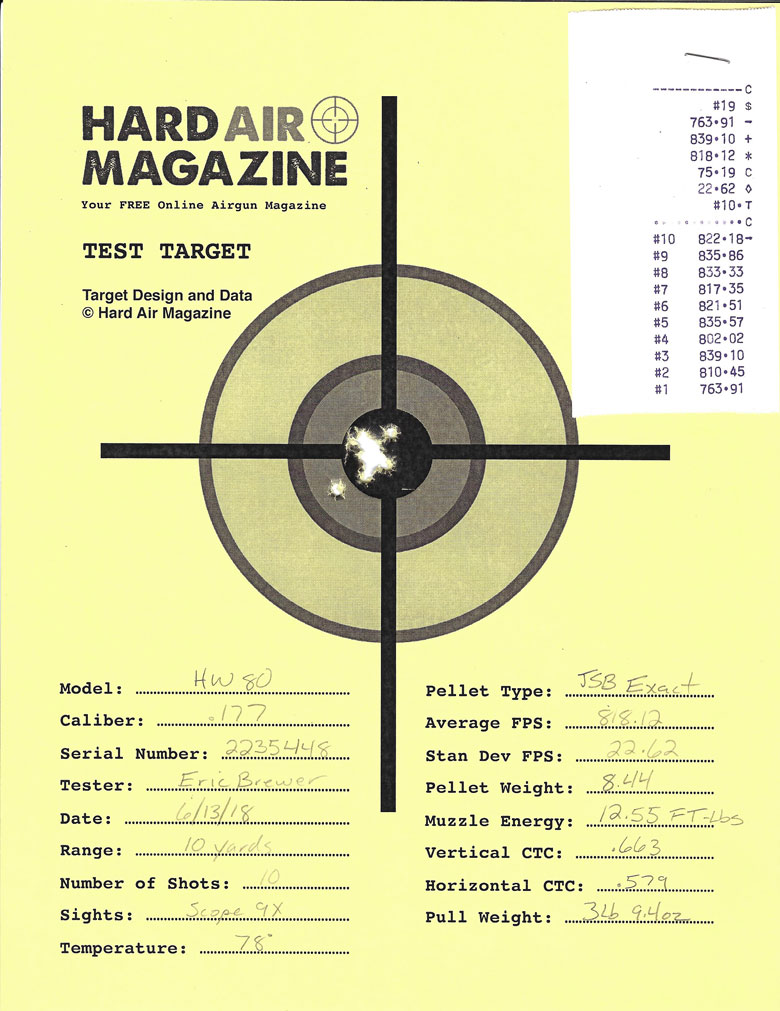 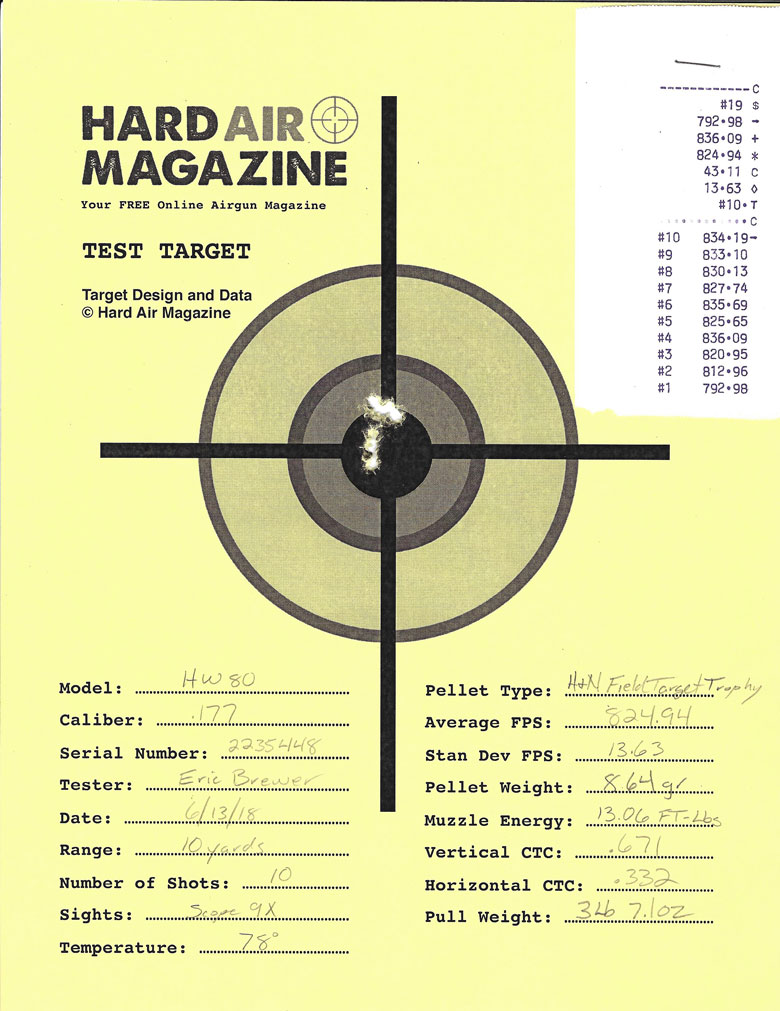 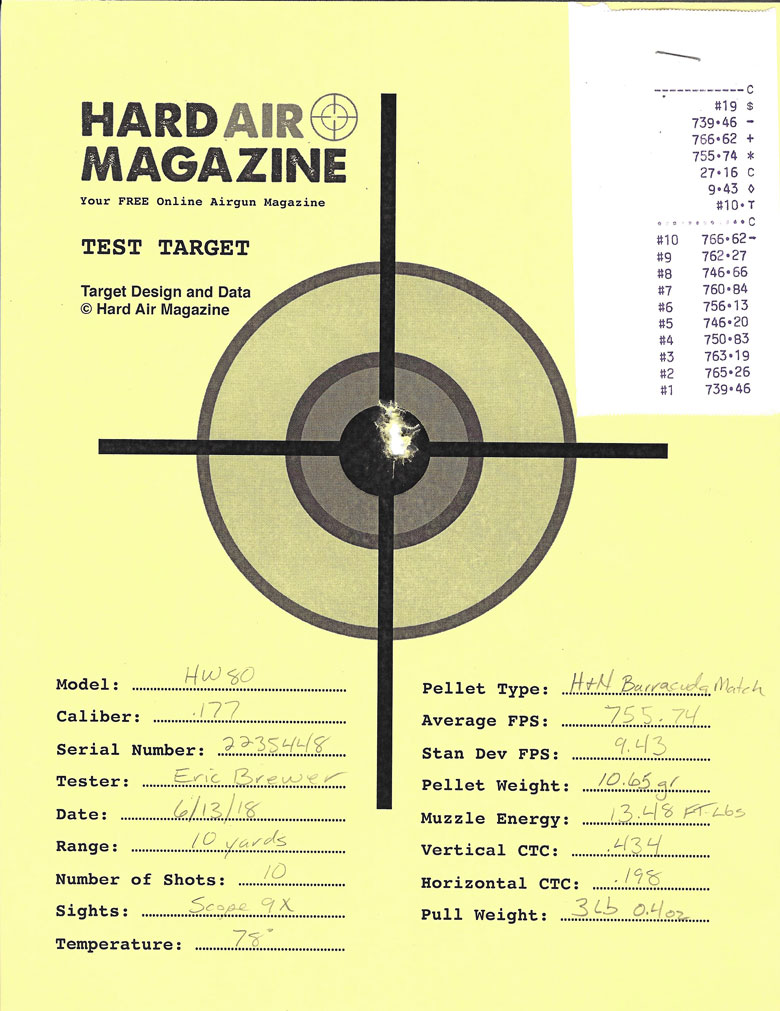