Bullpup PCP Air Rifles Are Everywhere At The 2019 IWA Show 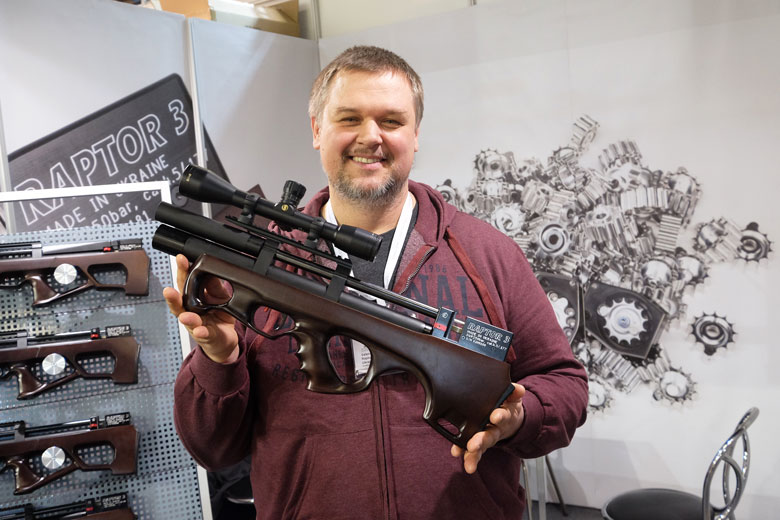 Bullpup PCP air rifles are definitely “the” style at this year’s show. Companies without at least one bullpup in their PCP range are now in a definite minority.

Let’s start with a range of bullpup PCP air rifles that will be new to almost every HAM reader. Raptor airguns are manufactured in Kiyv, Ukraine. The company was established in 2006 by Valentin – and this was their first IWA Show.

That’s Valentin, the owner of the company above. He’s looking pleased with his third generation Raptor Mini – as well he should be. All Raptor models are bullpup PCP air rifles, we can see more of the range below. Top is the Raptor Mini+, with the Mini below it. 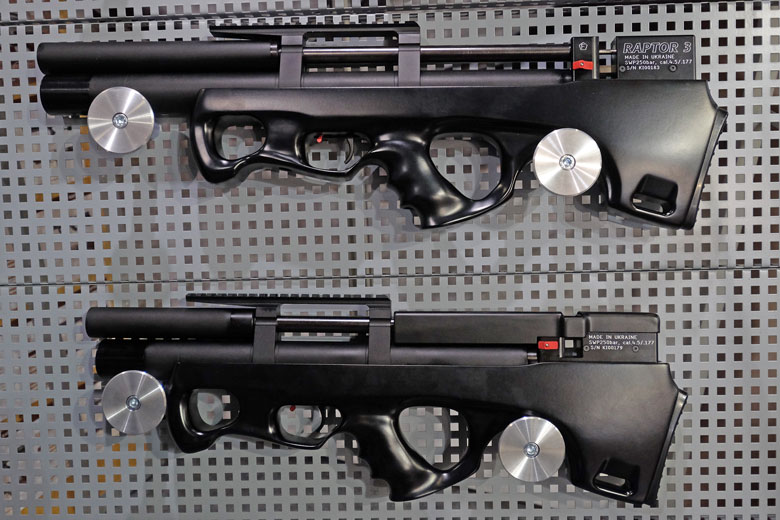 And in the next photograph we see the Standart+ and Long models. The actions are basically the same, with different length barrels, HPA tubes and stocks making the different types. 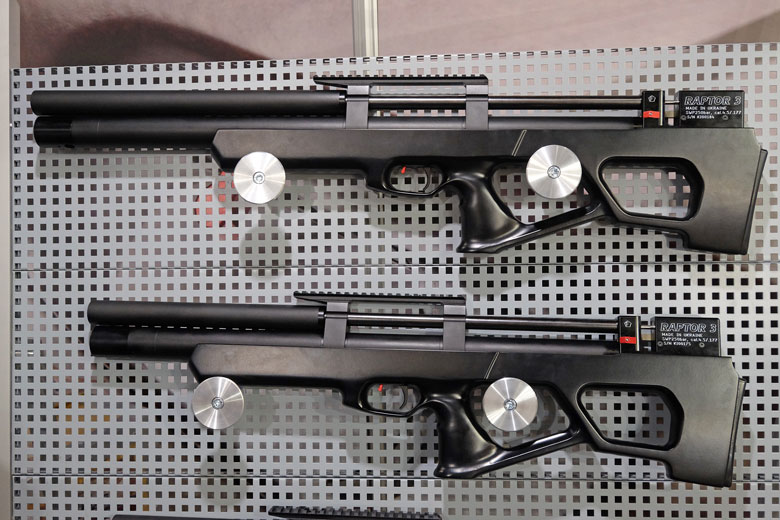 All Raptor bullpup PCP air rifles are regulated. Power levels can exceed 32 Ft/Lbs – even in .177 caliber and the can give a consistent 95 shots at this power, according to Valentin.

Raptor is looking for dealers in other countries – that’s why they are at the IWA Show – so you may see these interesting bullpup PCP air rifles available soon. In the meantime, check out raptorairuns.com.ua for more information.

Umarex has also launched a new regulated PCP air rifle – it’s called the Reign. The company’s Chief Airgun Designer, Juergen Kloeckener showed me his teams’ new gun and explained it to me. 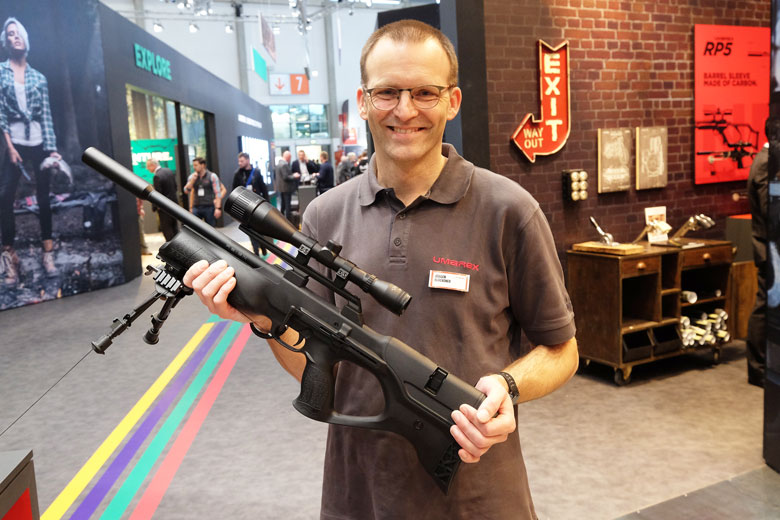 Juergen told me that the Umarex reign is a very light weight design – less than 6.6 Lbs – as a result of the synthetic clamshell design. There are two barrel lengths available and the cocking lever can be set for either left- or right-handed use. 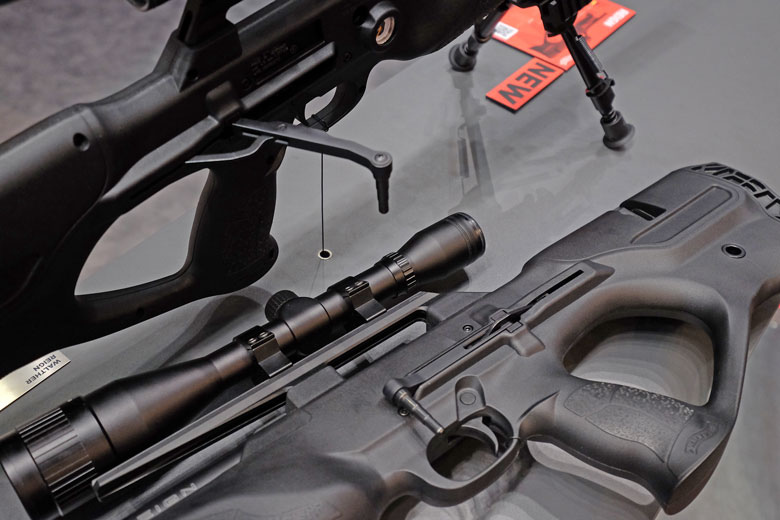 Another convenience factor is that the pellet magazines can be loaded into the Reign from either the left or right side of the gun. 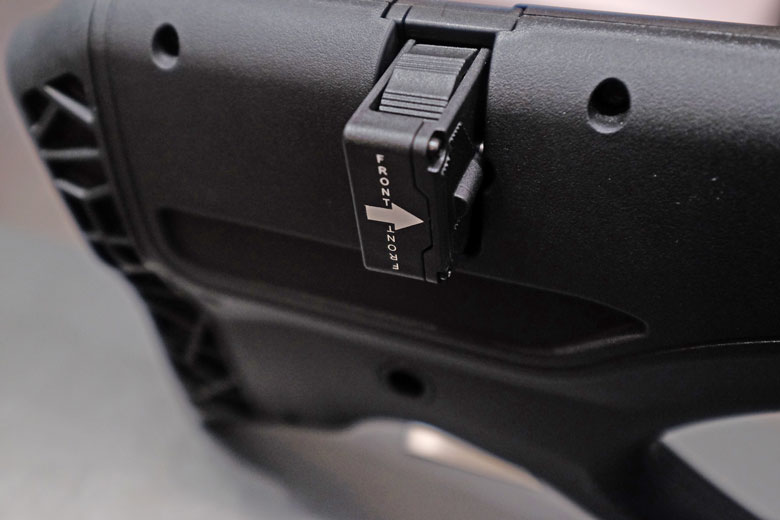 Filling is by means of a probe that inserts into the gun next to the pressure gauge. Fill pressure is 3,300 PSI. 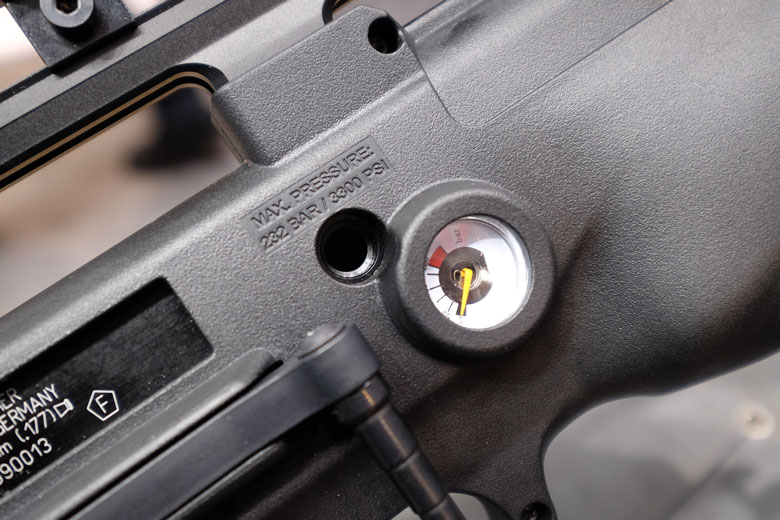 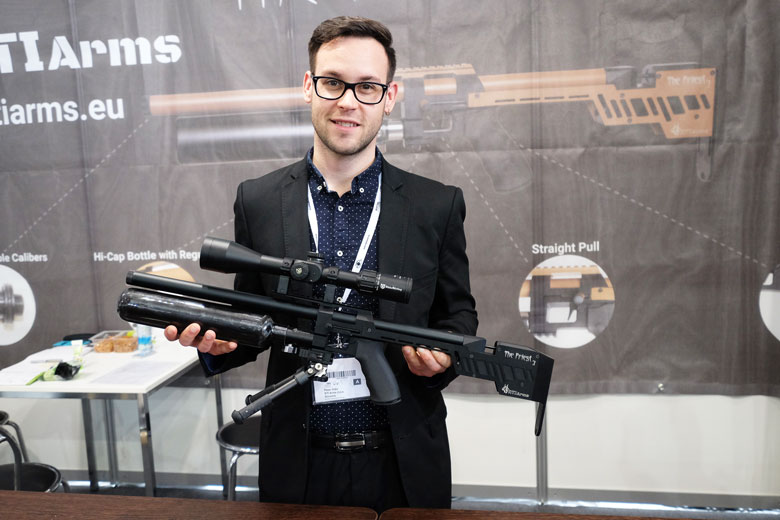 Many new bullpup PCP air rifles are being developed by Eastern European countries. RTI Arms is a Slovenian company which designs and manufactures an air rifle called The Priest. In fact, they now have The Priest in a Mark Two version, as Peter Vidic from RTI Arms shows us above.

The Priest 2 has a regulated HPA tank set in front of the trigger/receiver assembly. One gauge registers the tank pressure, the other the regulated air pressure. 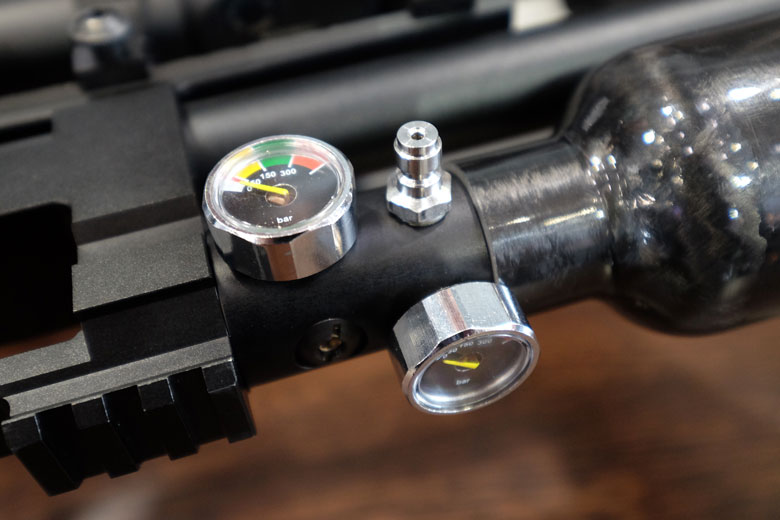 Thanks to the owner/designer of RTI Arms – Robert Polanc – we can see the magazine and receiver assembly.

Note the male quick disconnect fitting at the lower rear of the receiver. This allows a regulated HPA tank to be worn by the shooter and connected to the gun by a flexible hose. It’s an alternative to having the tank attached to the front of the gun. 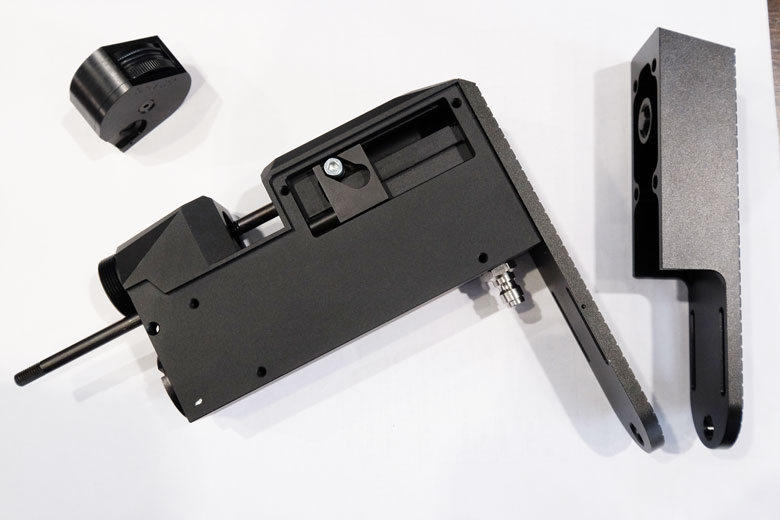 The right-hand part is a replacement buttplate assembly which also includes screw for adjusting  the hammer spring tension and – hence – the power of the gun. When assembled, it looks like this… 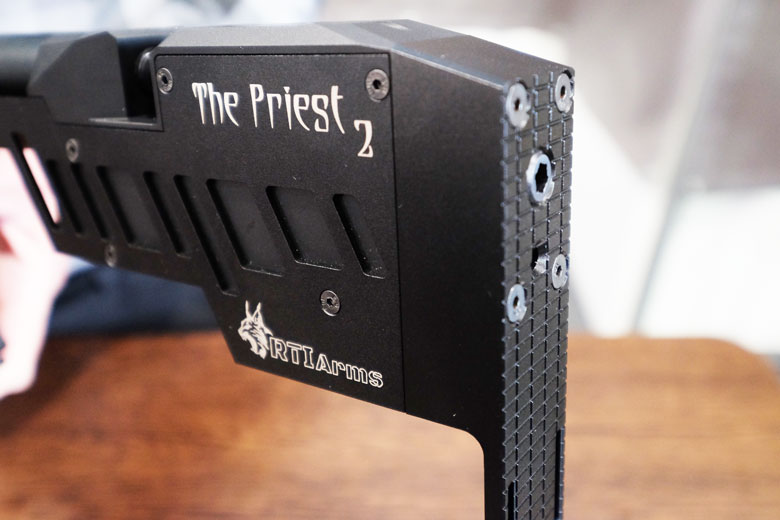 This is one example of how the Priest 2 is a modular design. It’s also easy to swap calibers, Robert explained to me. Just undo a couple of screws, remove the barrel and bolt and replace with the new caliber parts.

RTI Arms also designs, manufactures and sell regulators – including, of course, the one used in the Priest 2.

You can find out more about the Priest 2 on their website.

More new bullpup PCP air rifles were also launched by Gamo. The Furia is the company’s entry into this market and was given appropriate prominence on the Gamo booth. 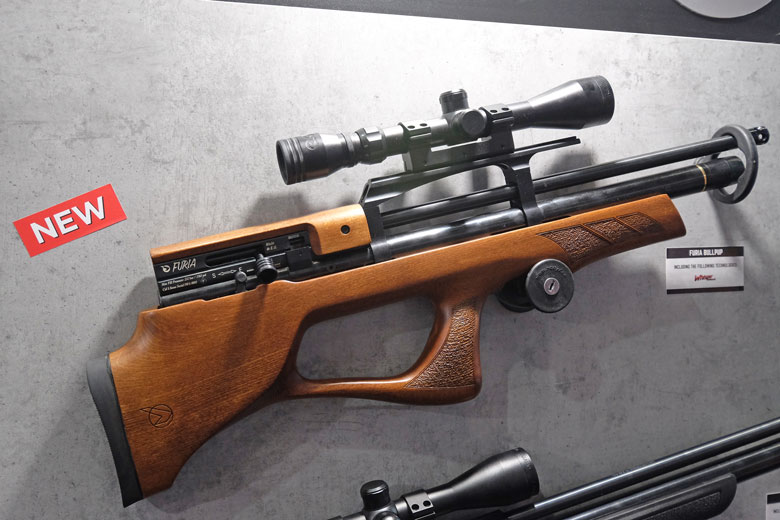 It is – apparently – quite a different design from the somewhat similar-looking bullpup Defiant air rifles from BSA (which is owned by Gamo, of course).

The new BSA Silver Star is, however, very similar to the Gamo PCP target rifle that was launched in the USA at the end of last year. 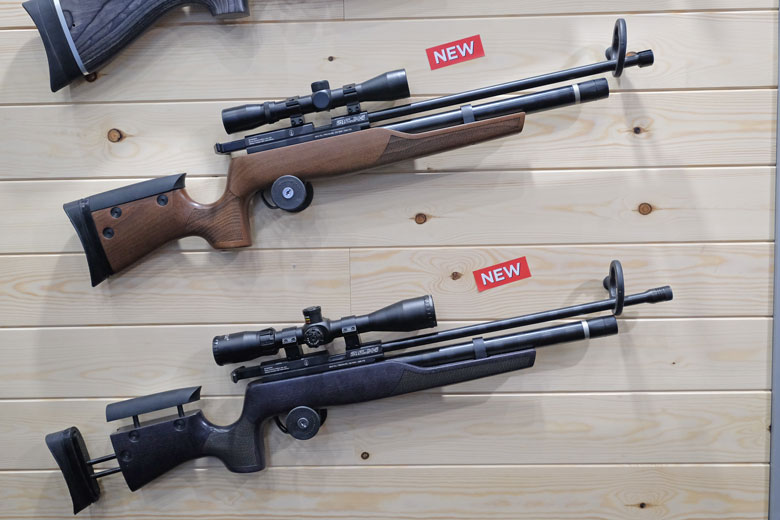 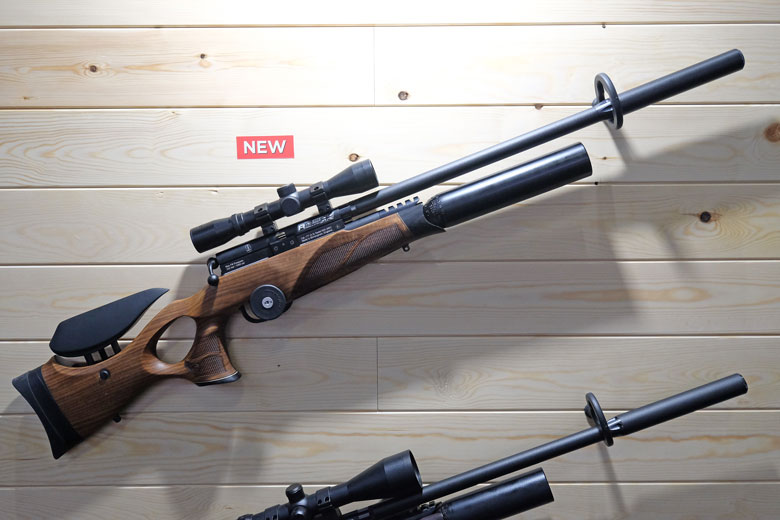 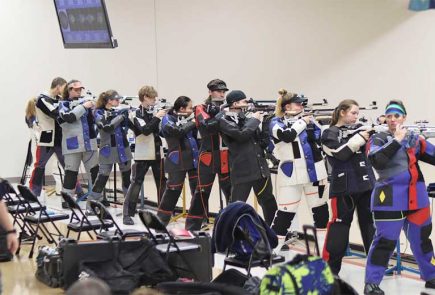