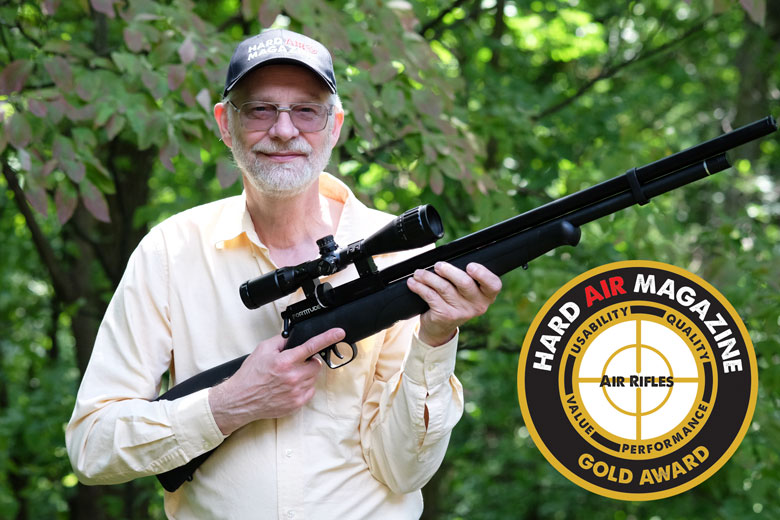 Heavy trigger pull.
Heavy bolt operation.
Not much else.

The Benjamin Fortitude has entered the $300 PCP market combining a regulated, magazine-fed action with shrouded barrel and 5-year warranty. Accuracy and consistency are very good, too.

It will undoubtedly be a huge seller!

These many positives will probably out-weigh the too-heavy trigger and hard bolt action for many purchasers.

The Fortitude is a clear HAM Gold Award winner.

The Benjamin Fortitude is a new entry into the “$300 regulated, magazine-fed, silenced PCP air rifle” market created by the Umarex Gauntlet a year or two ago.

With good accuracy and a strong shot count, it’s difficult to argue against the Fortitude being outstanding value. Particularly when that’s combined with a 5-year manufacturer’s warranty!

Many will also be drawn to this “made in the USA” gun for patriotic reasons.

Compared to the single shot, unregulated, unshrouded Maximus which sells at a Street Price of $230, the Benjamin Fortitude is clearly outstanding value. Crosman – or Velocity Outdoor to give the company its correct, new name – is going to sell a ton of these guns!

The Benjamin Fortitude tested by HAM gave a maximum Muzzle Velocity of 846.19 FPS with the lightest Gamo alloy pellets. This still held up to 792.42 FPS with light, 7.0 Grain RWS Hobby pellets. This gun is in .22 caliber, remember.

You can see full details of FPS and Muzzle Energy below. As is normal for a PCP, the Muzzle Energy – or knock down power” of the Fortitude increases steadily with heavier weight pellets, in spite of the declining pellet velocity. 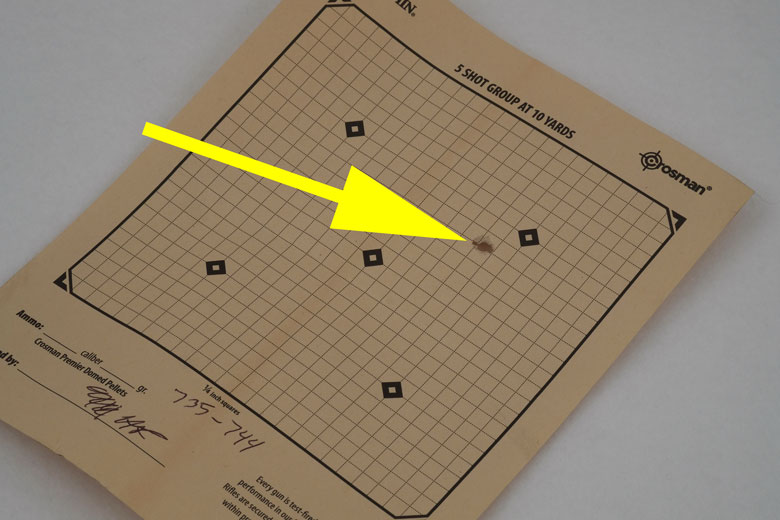 As we normally find in HAM testing, the Benjamin Fortitude did not give great accuracy with alloy pellets. However it shot better than usual with the light RWS Hobby pellets and gave better results with mid-weight and heavier lead pellets in the standard HAM test suite.

Best accuracy at 10 yards was achieved by the 14.35 Grain JSB Jumbo Express pellets. So we shot the same combination at 25 Yards with the results you can see below. For a 10-shot group at 25 Yards, that’s excellent shooting for me, in spite of the heavy trigger. 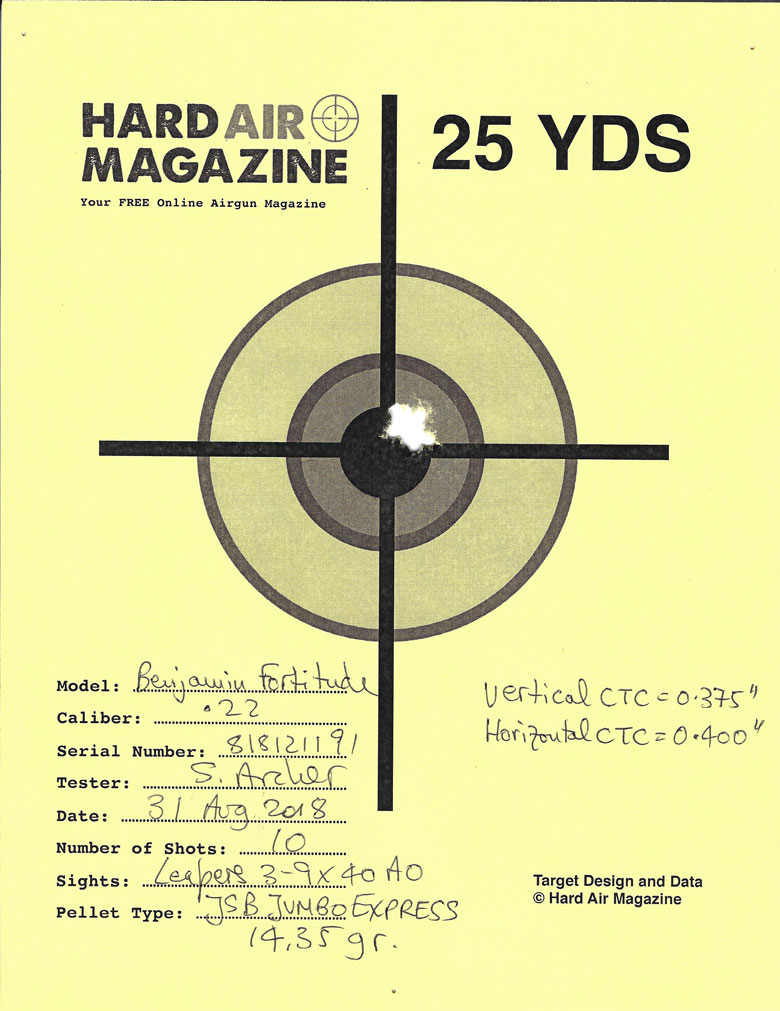 This is really the only part of the shooting experience that lets the Benjamin Fortitude down.

The trigger looks to be the same non-adjustable unit as fitted to the Maximus and inherited from the Discovery. The pull weight of the gun tested by HAM averaged no less than 5 Lbs 9 Oz. That is really much too heavy for consistent accurate shooting and very close to the 5 Lb 13 Oz average pull weight we found when testing the Maximus. 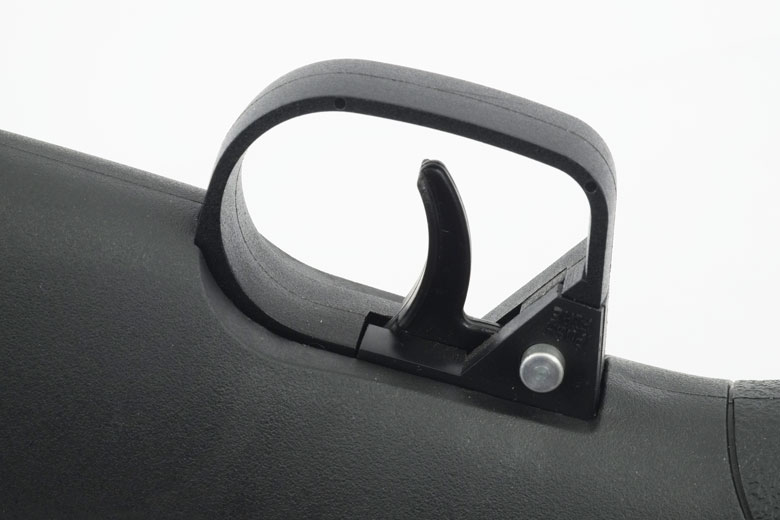 Cocking the Benjamin Fortitude is not so easy either. Unlike the Maximus and Discovery, which have very easy bolt operation, the bolt of the Fortitude is quite hard to pull back. It seems that there must be a pretty strong hammer spring inside the Fortitude!

And it’s important to pull the bolt right back all the way. If not there’s the chance of a double-feed or of no pellet feed.

Furthermore, the bolt handle of the Benjamin Fortitude is small and the shooter’s hand tends to be cramped in operation by the required scope. Fortunately the HAM Team used high rings for the scope in this test review. Medium rings would have made it even tougher… 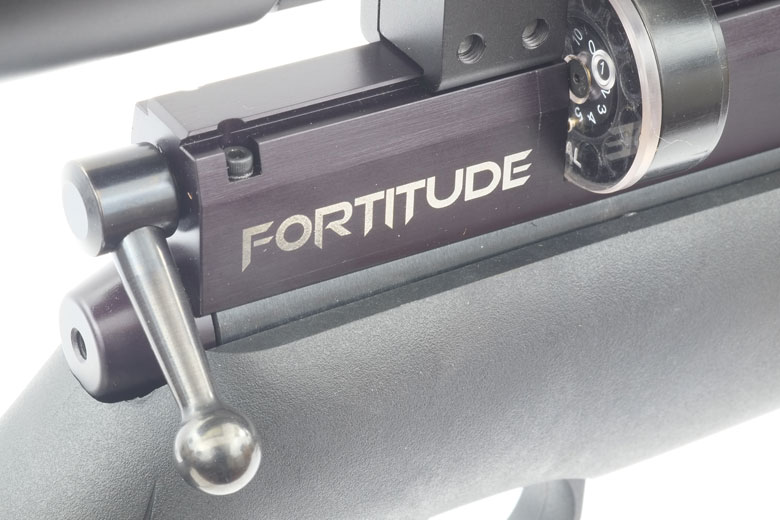 The main specification claims made by the manufacturer for the Benjamin Fortitude are these: up to 90 effective shots/fill, maximum 800 FPS with lead pellets, maximum 900 FPS with alloy pellets.

Let’s start with the easy one! The Fortitude tested by HAM delivered a maximum of  792.44 FPS shooting the lightest lead pellets, RWS Hobbys. That is less than one per cent away from the manufacturer’s claim of 800 FPS. Claim met.

For the maximum FPS with alloy, Velocity Outdoors claim is 900 FPS with alloy pellets. In HAM testing, the Fortitude gave a maximum of 846.19 FPS using the lightest 9.7 Grain Gamo Raptor Platinum pellets. However, there are ave been some yet lighter Crosman alloy pellets with a weight of 9.5 Grains. 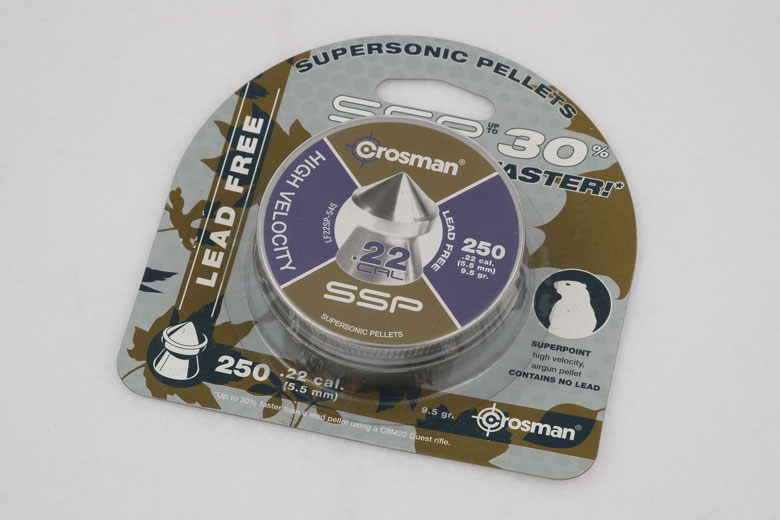 These 9.5 Grain Crosman SSP alloy pellets are not in our standard HAM test suite. They don’t seem to currently be available for sale either. However, we did have a tin in the HAM ammo dump and tried them out. The maximum we attained was 851 FPS with the Benjamin Fortitude on test.

(Don’t try this at home, folks. Feeding was very hard and caused considerable concerns about jamming to the HAM testers).

Now let’s discuss the shot count claim. The .22 caliber Benjamin Fortitude page at www.crosman.com states that the gun will deliver “up to 90 effective shots per fill”.

This may be true. However, it’s not the answer to the question most knowledgeable airgunners ask about a regulated PCP air rifle. That question is “How many consistent shots will I achieve per fill?” There’s a big difference between the meaning of the words consistent and effective…

HAM ran a shoot down test of the Benjamin Fortitude. The results are visible in the chart below. That shows that the Fortitude tested by HAM delivered 60 consistent shots from a fill – where consistent is taken to mean shots with a Muzzle Velocity difference of 40 FPS between highest and lowest. In this case that means between between 770 and 730 FPS.

Why 40 FPS? Well that’s widely considered by knowledgeable shooters to be the maximum difference in FPS before a noticeable difference in impact point is found at 50 yards downrange.

We stopped the HAM shoot down test after 70 shots. By this time the Muzzle Velocity had fallen below the regulator pressure point of 2,000 PSI – that was probably at around shot 55 – and was dropping steadily. The built-in pressure gauge showed 1,500 PSI at shot 70.

Maybe that would track down to a pressure of 1,000 PSI – where the yellow section begins on the Fortitude’s built-in pressure gauge – at shot 90. If so, would that mean that the Benjamin Fortitude is capable of 90 effective shots per fill? Maybe the answer would be “yes” for some people.

But let’s face it. 60 consistent shots per fill is a very good number for any regulated PCP of this price range, size and weight!

Here’s the shoot down test results discussed in the section above.

The Benjamin Fortitude tested by HAM delivered outstanding figures for Standard Deviation, the mathematical expression of variation in FPS across a string. In fact, the average of just 3.23 FPS across the entire HAM test suite of 7 pellets is the lowest we’ve ever recorded for any air rifle at any time. Wow!

The consistency of trigger pull weight was also good. The trigger pull weights recorded by HAM varied by just 5 ounces either side of the average. That’s a pretty well imperceptible difference to most people. It’s a pity that they were all so high…

As with many PCP air rifles, the Fortitude is not supplied with a scope. This is no hardship as just about everyone will want to fit a scope anyway and everyone has their own opinions about the scope they prefer.

For HAM testing, we mounted a Leapers UTG 3-9 x 40 AO scope onto the Benjamin Fortitude as we considered this would be a likely choice for many owners. 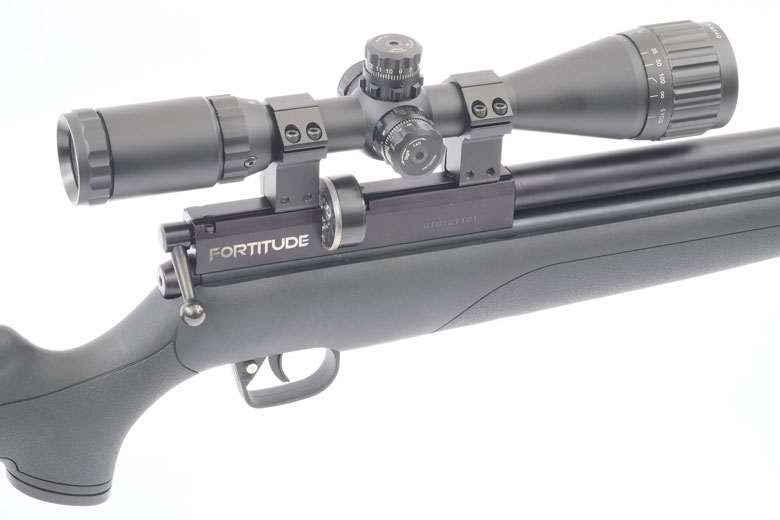 This scope worked well for HAM testing. Unlike many higher-power scopes, it’s not too long or heavy to make the Fortitude top heavy and overbalanced in either looks or weight.

The HAM Team found this Leapers/Fortitude duo to be a good combination for practical, cost-effective shooting.

The Benjamin Fortitude is light and easy to bring on aim. The Center of Gravity was just ahead of the pressure gauge with the Leapers scope mounted – just where it should be for easy shooting.

By sensibly using the Marauder 10-shot magazine, the Fortitude is easy to load in a way that’s well-known to many potential purchasers.

In out-of-the-box condition, the Fortitude’s shootability is compromised by the heavy bolt and trigger operation. At this price point, many purchasers will accept this. If not, the Benjamin Marauder has an outstanding trigger of course…

Regarding the stock, the HAM Team would prefer to see a more “grippy” buttplate than the shiny plastic one used here. That would help in achieving more consistent, accurate shooting.

Re-using the Maximus stock obviously makes sense from a cost perspective. However the Fortutude’s barrel is mounted higher due to the shroud and magazine-fed breech. This means that the stock no longer gives a good cheek weld in use. It’s actually more of a “chin weld”.

There’s a clear need for either an adjustable buttplate or adjustable comb on the stock for consistent, comfortable shooting with the Benjamin Fortitude.

Appearance is, of course, always a personal opinion. However, the HAM Team like the simple, slim lines of the Benjamin Fortitude.

The finish closely matches that of the Maximus, using the same stock and levels of external finish for metal parts.

That stock is generally well-molded. However it does have quite pronounced seam lines as we can see below. The inclusion of sling swivel studs is an useful feature and will be appreciated by those using the Fortitude for hunting.

Overall, finish is workmanlike, decent and practical. That’s pretty much what you would expect at this price. 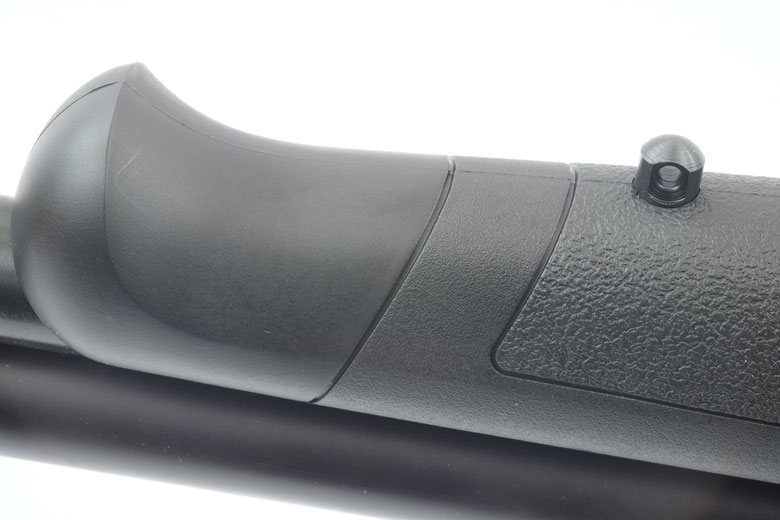 Given the extensive distribution network for Velocity Outdoor products, the Benjamin Fortitude is certain to be widely available for sale online and also in some physical stores.

The substantial barrel band is also reassuring for its role in preventing the barrel/shroud assembly from being knocked out of alignment by minor unintended contacts.

Filling is through a standard “Foster” 1/8-inch NPT standard quick disconnect, this makes filling simple, with no need for adapters. 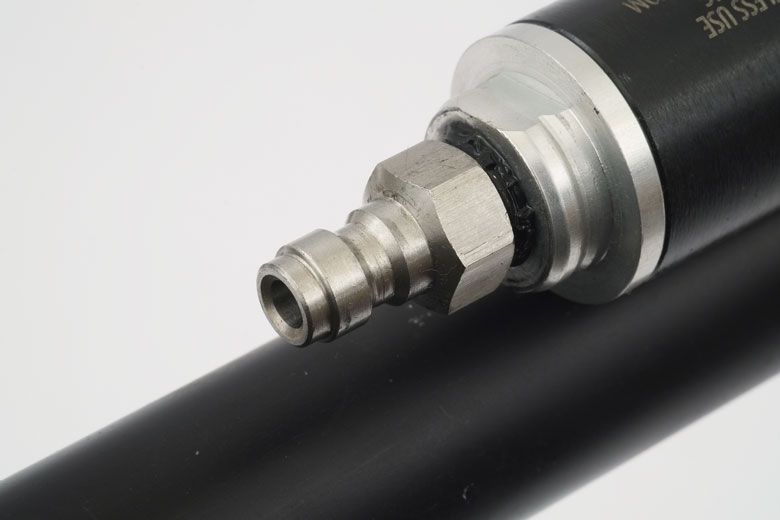 The pressure gauge is located under the stock, ahead of the trigger, in the normal location for Benjamin PCP air rifles. This is excellent for safety as it avoids the need to look down the barrel to check the gauge, as is the case with those PCPs having the gauge in the end of the pressure tube.

The Owner’s Manual for the Benjamin Fortitude is in the company’s usual “broadsheet” style. This is clearly-written and illustrated, with versions in English, Spanish, French, German and two other languages I can’t read – possibly Portuguese and Danish.

And it’s in the Owner’s Manual that you will find details for how to degas the Fortitude using a degassing tool. This tool is not supplied with Benjamin or Crosman PCP as it once was. However, they’re still available from aftermarket suppliers. The Discovery/Maximus tool will also fit the Maximus. 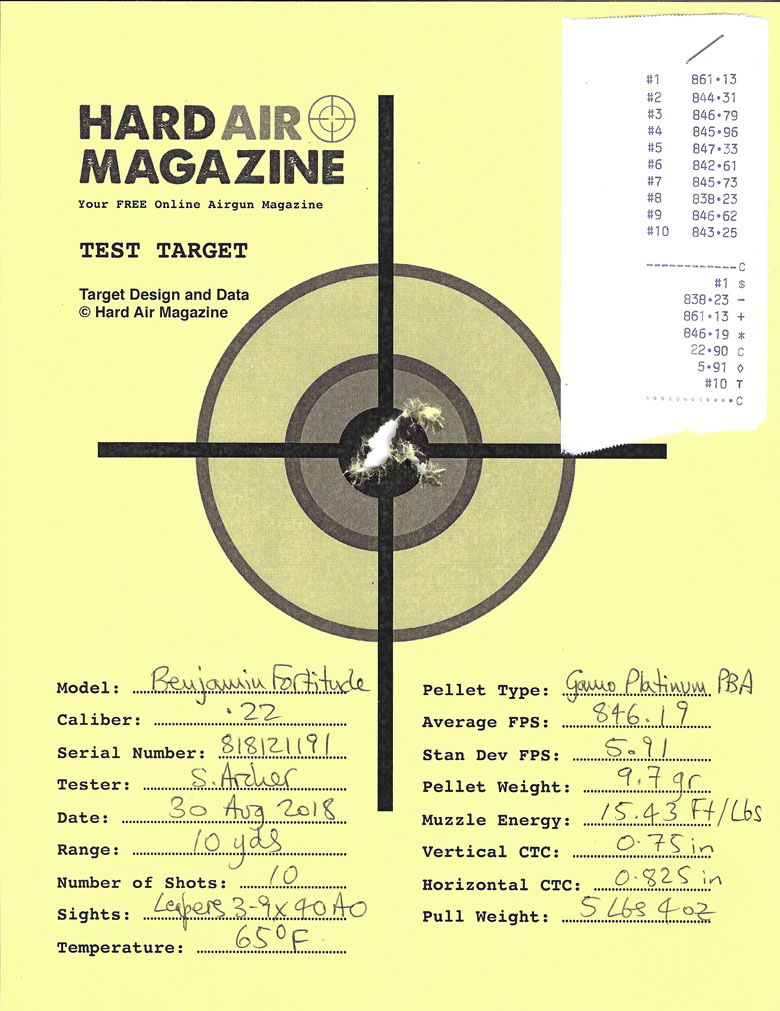 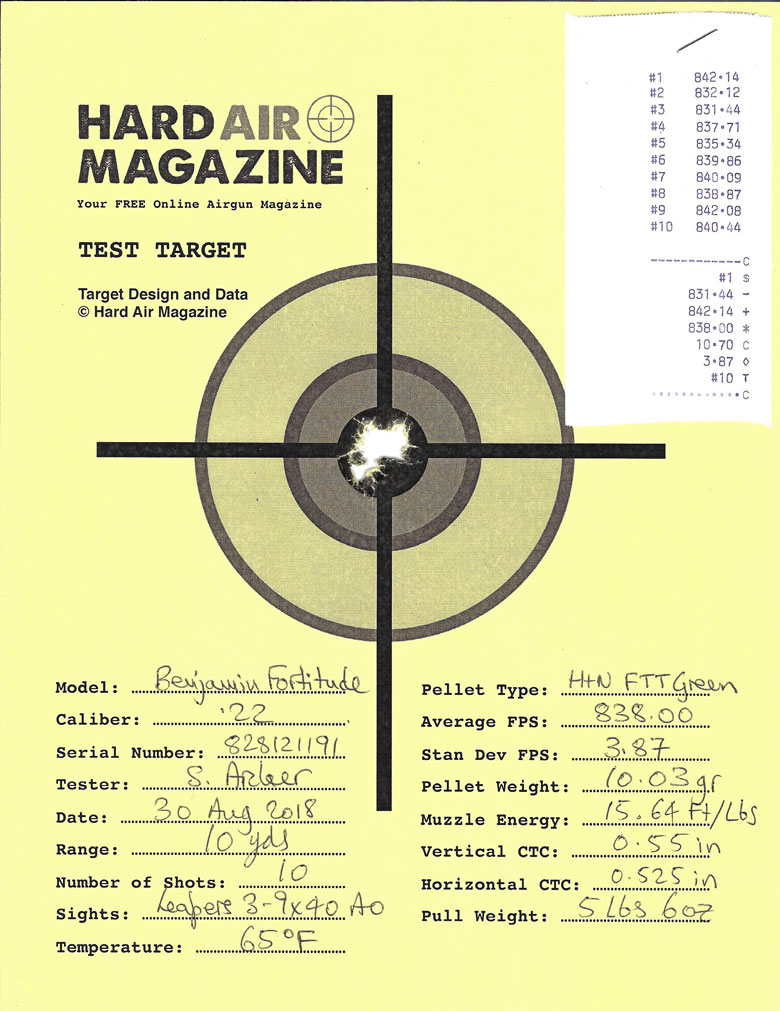 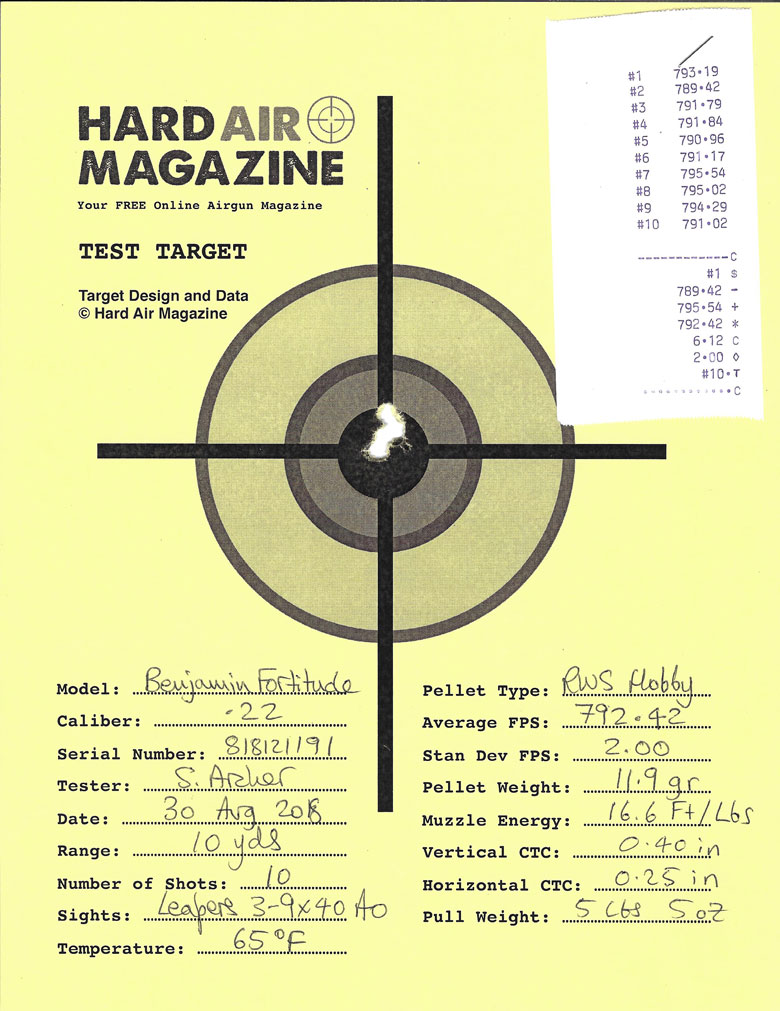 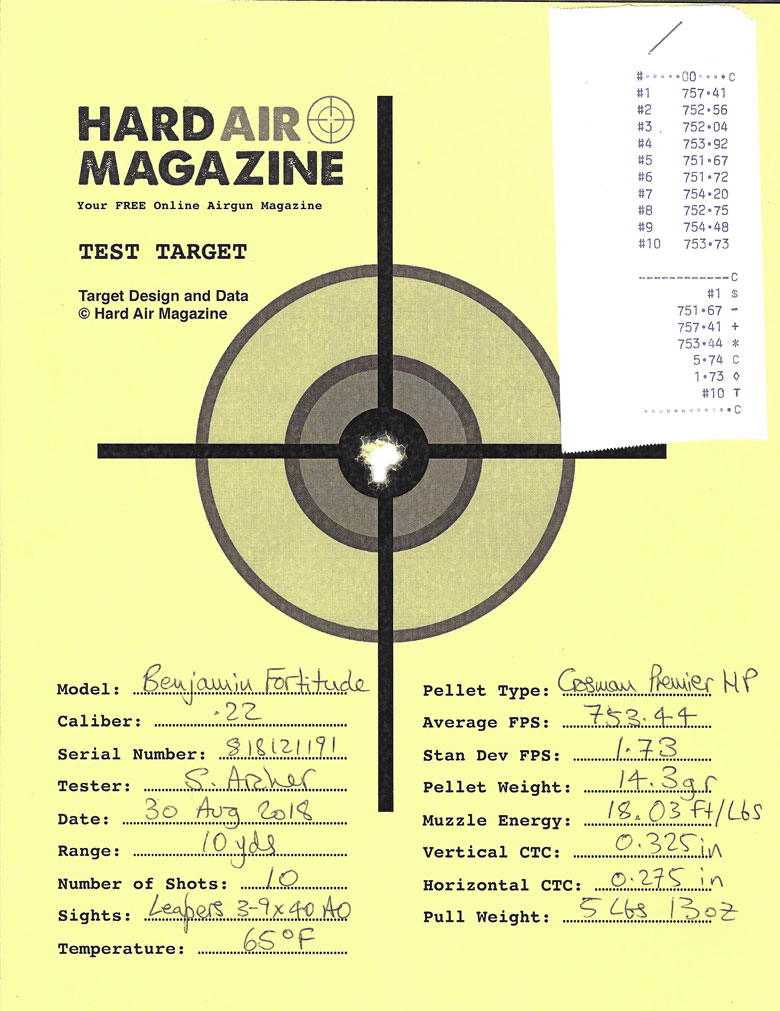 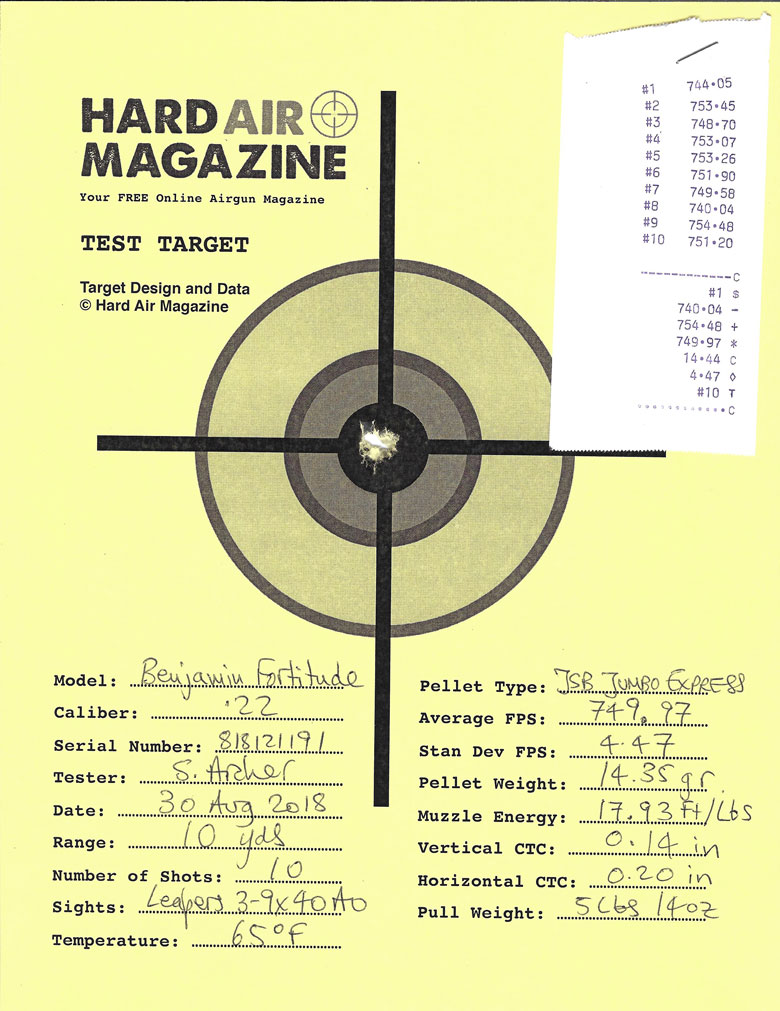 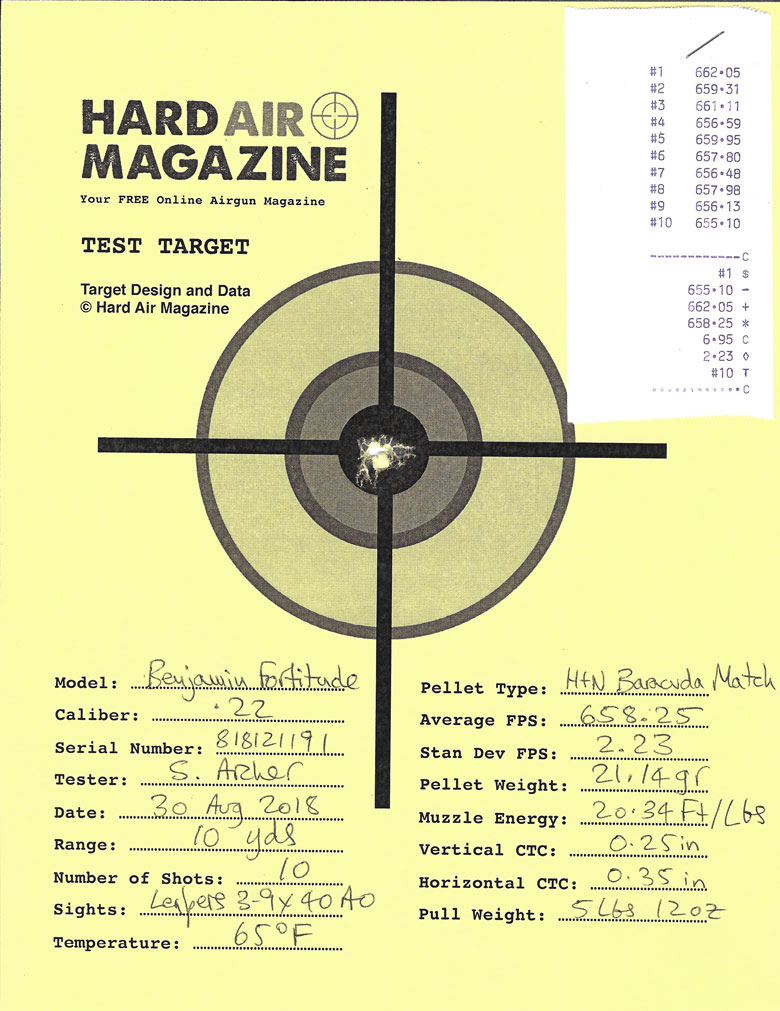