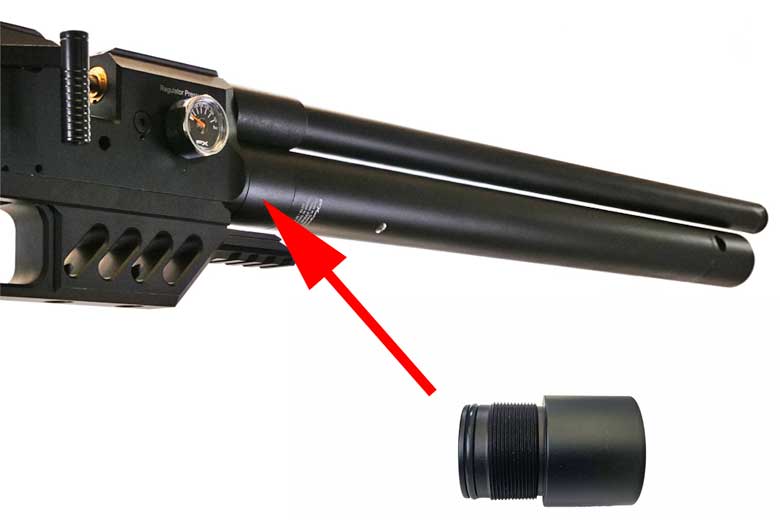 The new FX Dreamline Power Plenum has just been announced. It’s similar in concept to the Power Plenum for the Imapct, allowing a larger volume of High Pressure Air to be held between the regulator and valve.

The air it contained in the plenum is released when the trigger is pulled. The air then pushes through the valve behind the pellet – or slug – and propels it down the barrel. The amount of air pressure combined with the volume of air released is one of the key aspects to achieve velocity in a PCP air rifle.

The Dreamline Power Plenum adds 17cc of plenum space to the airgun. It’s a simple screw-on adapter that can be added to both the standard Dreamline and the Dreamline Bottle versions of rifles.

FX Airguns says that any Dreamline owner can with ease upgrade their rifle in minutes without fear of damaging their rifle and without the need of technical knowledge.

Here’s the instructions from FX Airguns…

1. First clear the airgun and set on safe.

2. Then de-gas the airgun and check that no pressure remains in the gun.

4. Next, screw on the Power Plenum, screw back on the air cylinder (or bottle adapter for bottle guns), and refill the rifle with air.

This simple change adds upwards of 130 FPS to Muzzle Velocity, FX USA tells us. That depends on the caliber and weight of the projectile, of course. It definitely provides more power for shooters wanting to capitalize on the potential performance of slugs.

Maximum Muzzle Energies for the FX Dreamline Power Plenum are up to:

Alternatively, the Dreamline Power Plenum can extend the gun’s shot count by allowing the rifle to achieve the same velocities at lower regulator settings.

At an MSRP of $30, you really can’t go wrong. This is a great, simple, low price upgrade from FX Airguns and it will be available very soon!