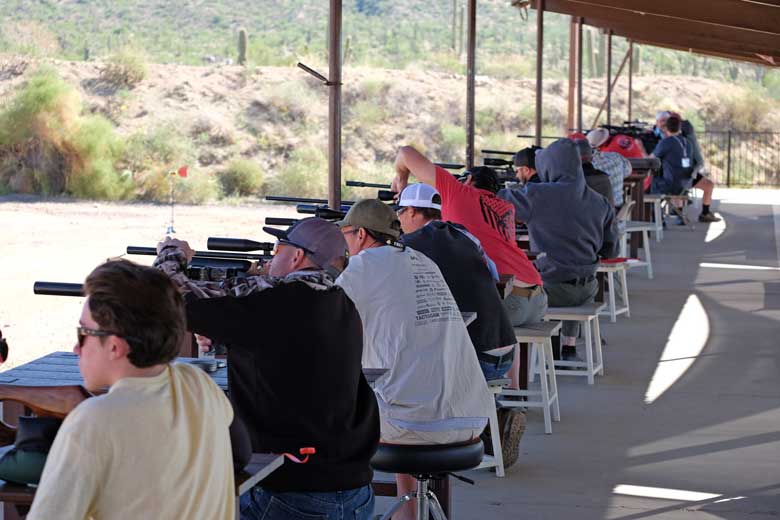 There’s a huge variety of airguns being used at EBR 2019. Let’s take a look at come of them today…

Naturally, the vast majority of air rifles on the line at Extreme Benchrest are PCPs. There’s practically a “Who’s Who” of famous airgun manufacturer’s products to be seen down the firing line. Some are familiar. Others less so.

Of course, there’s plenty of Daystate air rifles being fielded here. Primarily these are Red Wolf models like this one being shot by Peykan Barami. 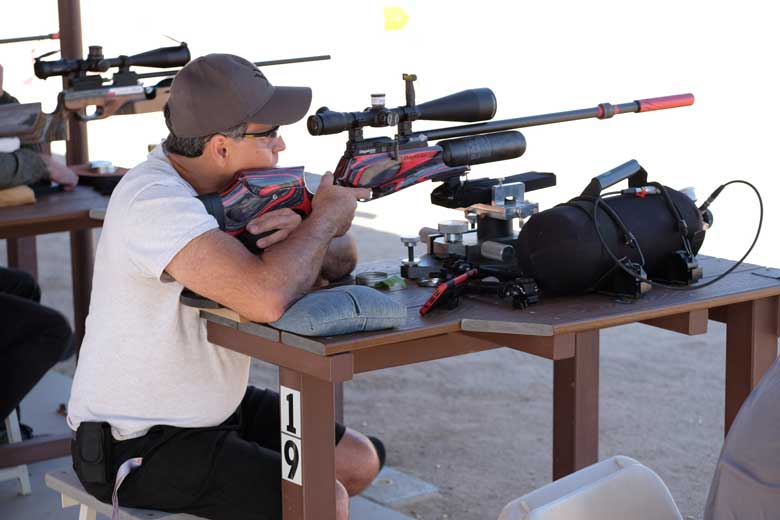 Tom Adams from Tom Cat airguns was also campaigning with one. 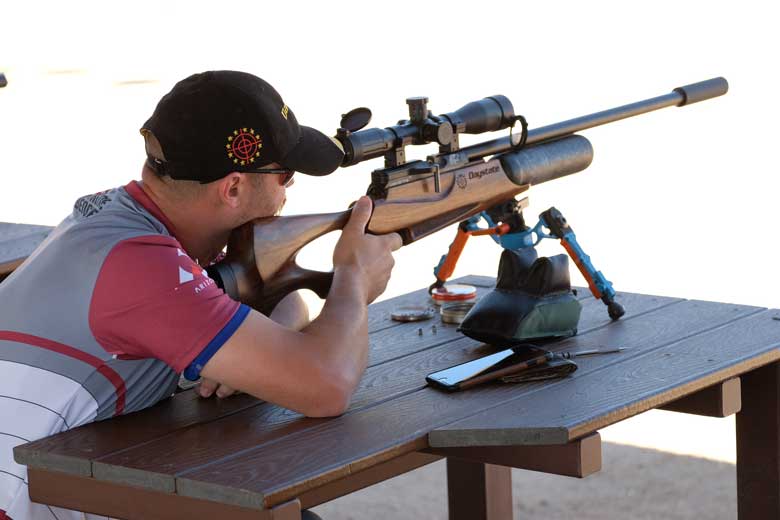 There’s also plenty of FX airguns to be seen down the line. David Stevenson from the Utah Airguns team was happy shooting his Impact. 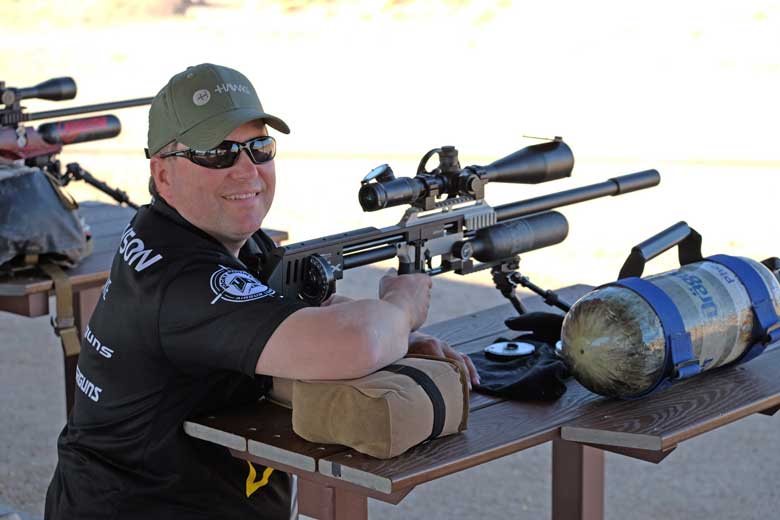 As was this gentleman below. There were also many FX Crowns to be seen. 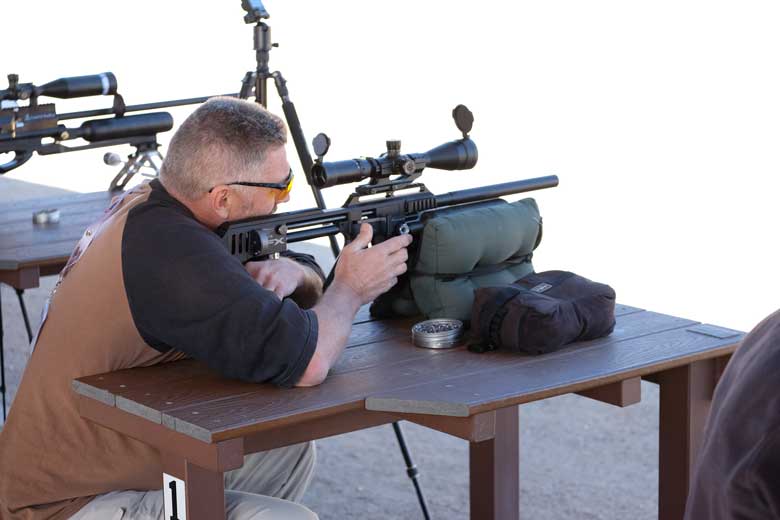 Another popular brand was RAW – Rapid Air Weapons – now, of course, part of the AirForce group. 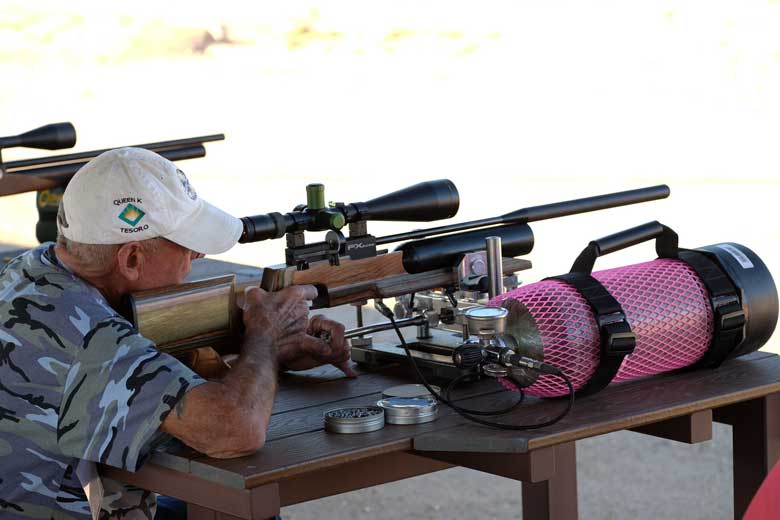 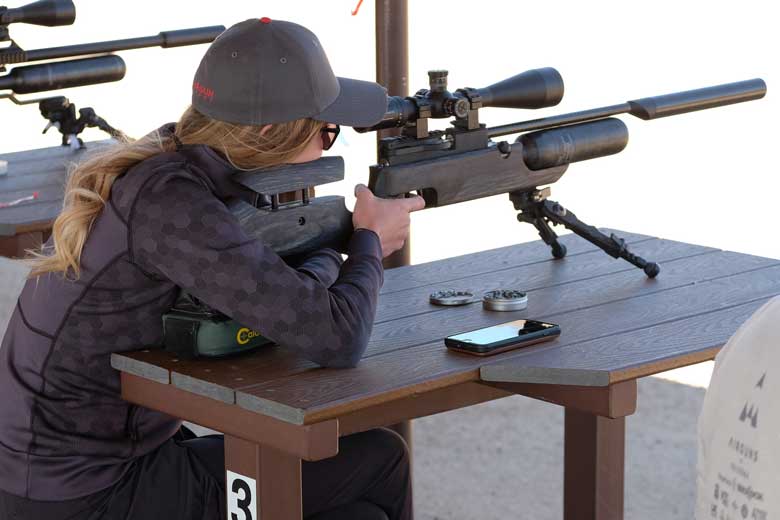 A number of Thomas air rifles was to be seen – and heard – in use. The unmoderated models are LOUD! Below Garrett Kwakkestein shoots one… 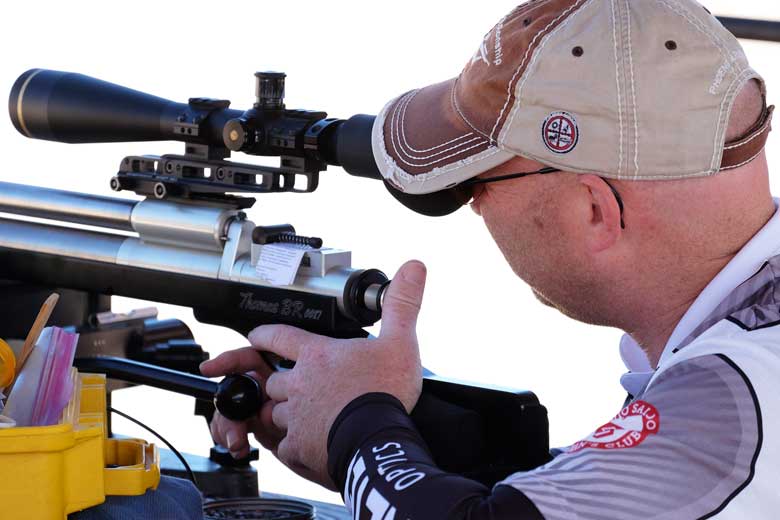 While the 2018 EBR winner Claudio Flores was also shooting one in the 50 Yard Benchrest competition.

The American Air Arms EVOL 22 was also making its presence felt, as we can see below. 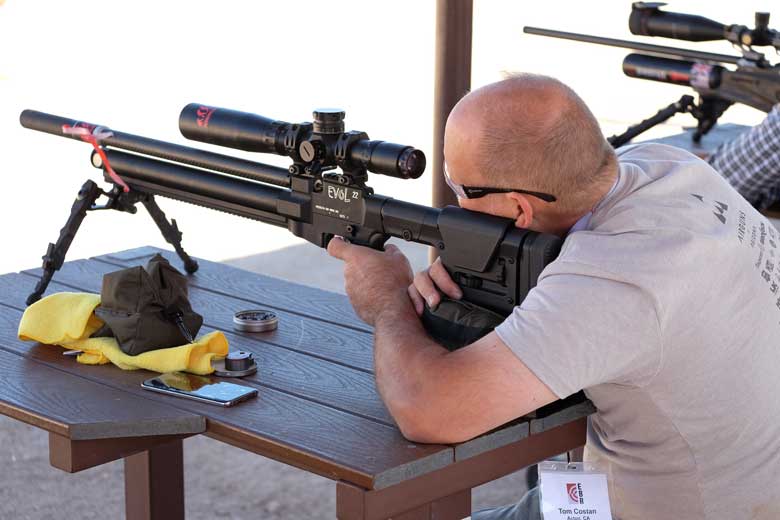 Then Claudio changed to an EVOL 22 for the 75 Yard Extreme Benchrest Card One. That’s one heavy duty-looking air rifle! 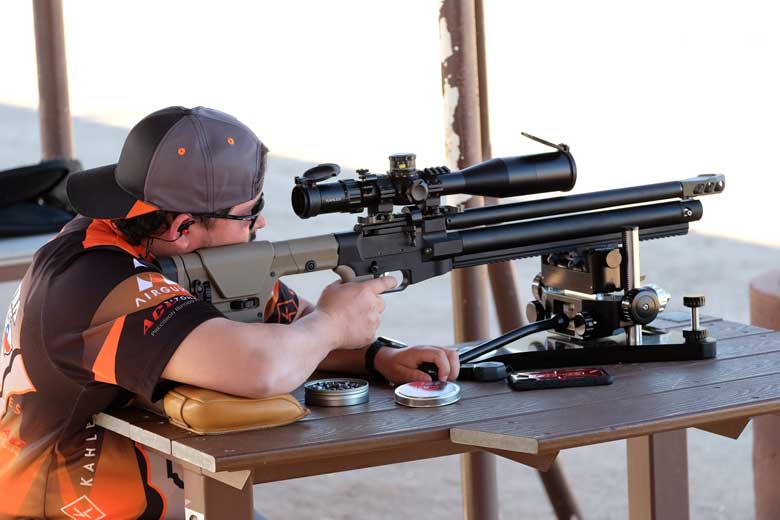 But wait, there’s more! Continuing the huge variety of airguns used At EBR 2019 was this BSA R10. 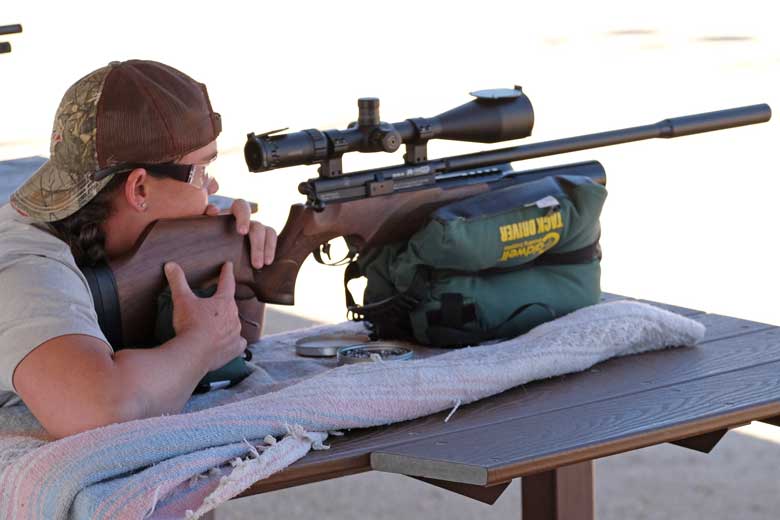 Slovenian manufacturer RTI was – of course – shooting their Priest 2 and Prophet models. That’s a Benjamin Marauder in-shot behind, of course. 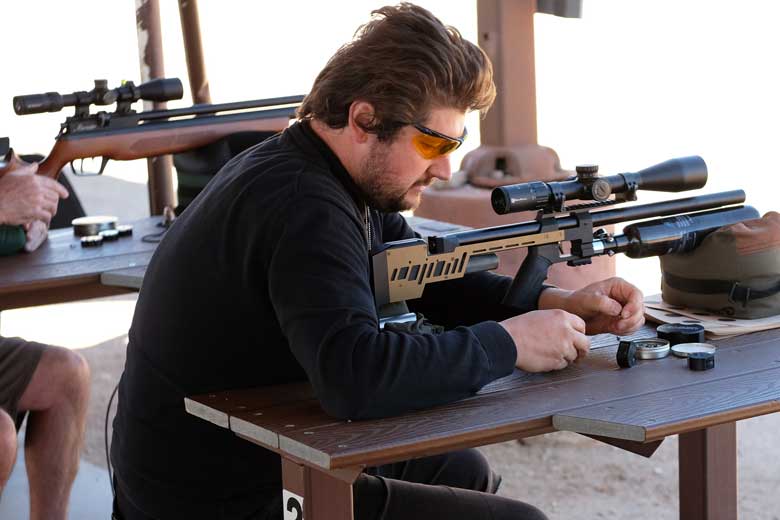 While Kyle from Umarex was shooting a variety of different Umarex Gauntlets – one for each competition. Here we see him with this blue-stocked .22 caliber model in the 50 Yard Benchrest competition. 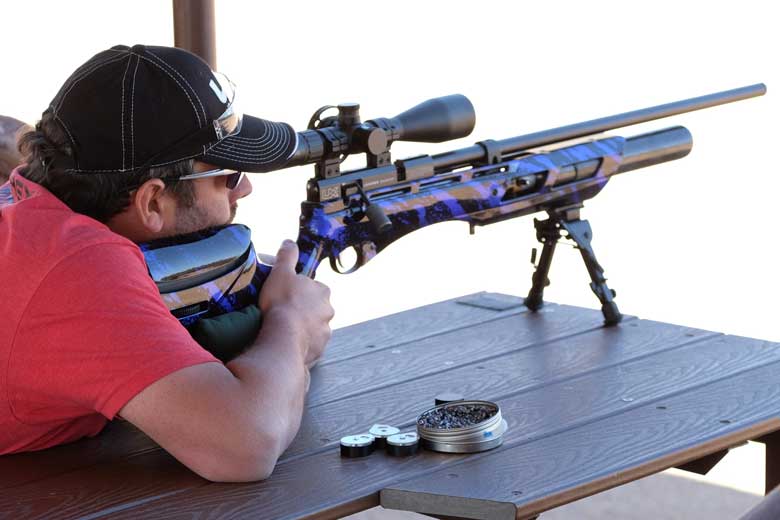 And then, just when you think you’ve seen it all, Nicolai – who had traveled all the way from Moscow, Russia for the event was shooting his Russian Jaeger PCP air rifle. That’s one interesting-looking airgun! 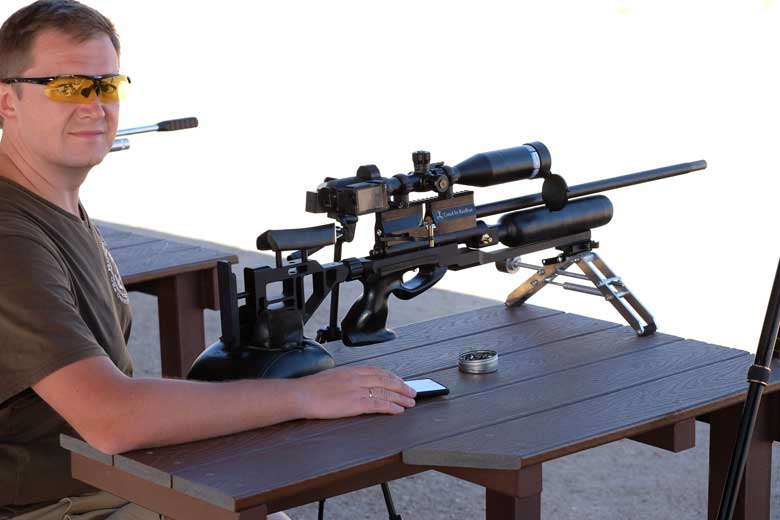 Last, but not least, LCS Air Arms had a spot on the demo range. Many EBR attendees couldn’t resist the opportunity to try-out this new full- and semi-auto model. Of course it brought a smile to everyone’s face 🙂 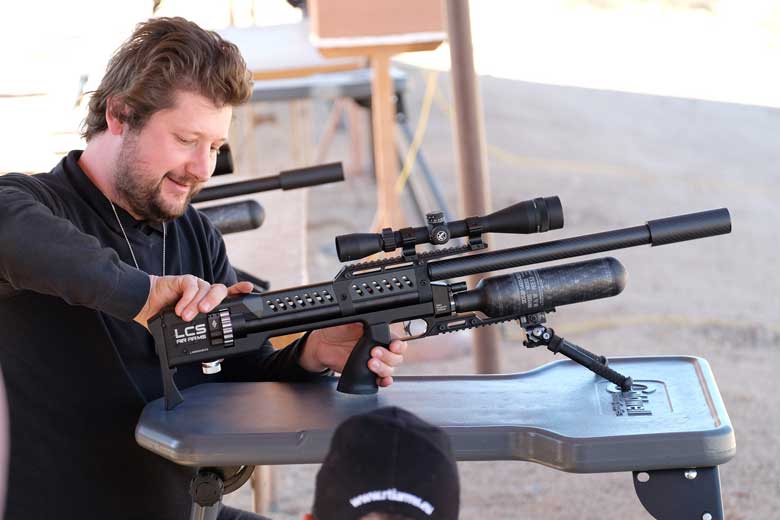 But it wasn’t a completely PCP show. At one end of the line, a few “real men” were shooting springers and having a great time doing so. But it has to be said that they are definitely in the minority… 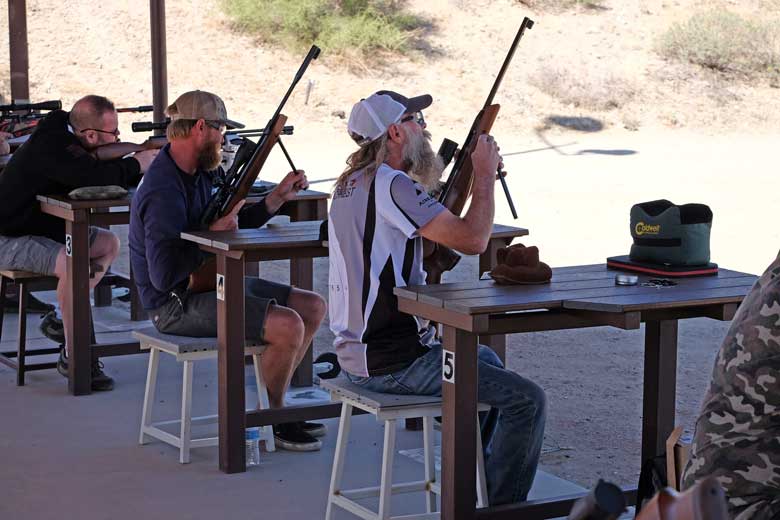 There’s lots more news and interest to come from EBR 2019, so there will be more posts to come, as soon as I have time to write them. Keep watching this space!