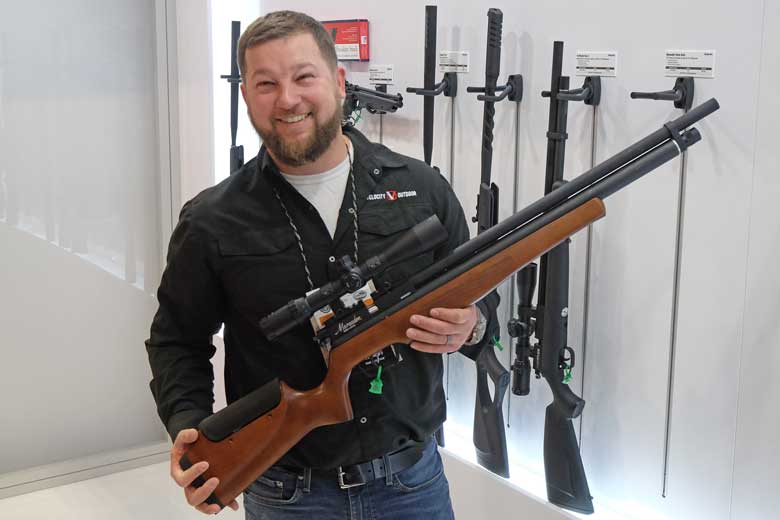 Hot news from the 2020 SHOT Show is the first appearance of a new Benjamin Marauder Semi Auto air rifle. That’s Phillip Guadalupe – the company’s Product Manager for PCP airguns – showing us this gun above.

The Marauder Semi Auto is largely based on the existing regulated Marauder – a very sensible move. However there’s a range of changes, including an ambidextrous cocking handle, as seen below. As you would expect, this needs to be operated after a new magazine is inserted in the action. The gun then cycles from shot-to-shot using the semi-auto action until all shots have been fired. 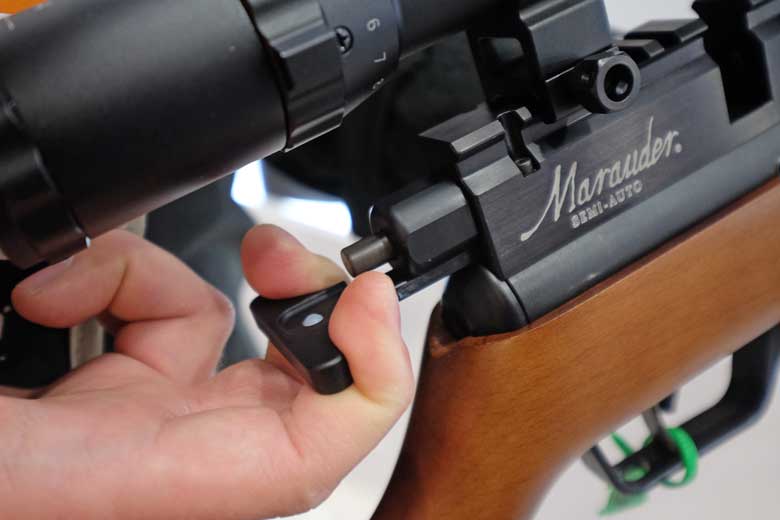 Phillip told me that the Marauder Semi Auto uses an air-operated action using waste air from firing the gun within the breech. As with other semi-auto air rifles, there will be a pellet chambered in the barrel, even if a part-shot magazine is removed from the action. We’ll all need to learn about safe gun-handling as semi-autos like the Marauder become more popular in future! 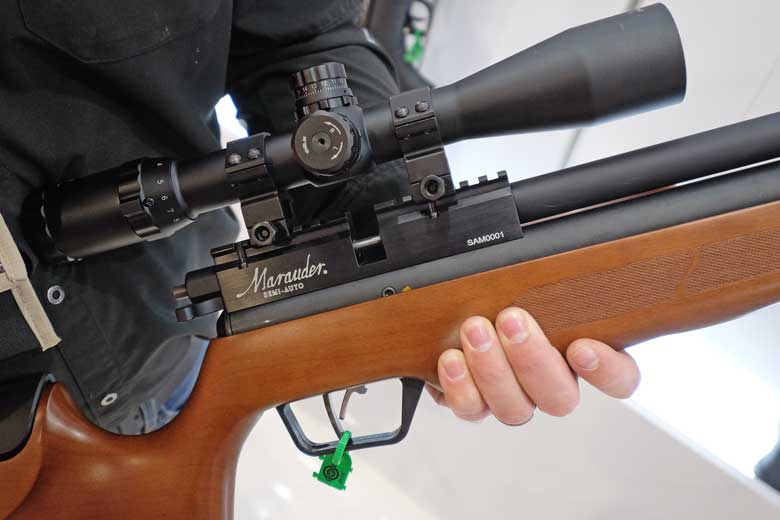 Phillip also explained that there’s a number of changes “under the hood”, including a new valve and modifications to the trigger assembly. Somewhere around mid-year 2020 availability is being proposed although obviously that’s subject to change.

As we can see, the SHOT Show gun carries the serial number SAM0001 – that’s for Semi Auto Marauder. So it’s easy to see that Marauder Semi Auto air rifles could be known colloquially as “SAMs” in future. As with other Marauders, the SAM is designed and manufactured at Velocity Outdoors’ corporate headquarters in Bloomfield, NY. All-in-all, this sounds like a very interesting new model!

The existing Marauder bolt action models will continue in the company’s lineup for the forseeable future.

Three more new Benjamin PCP air rifles were also announced at the 2020 SHOT Show. These have sidelever actions with a distinct family resemblance. 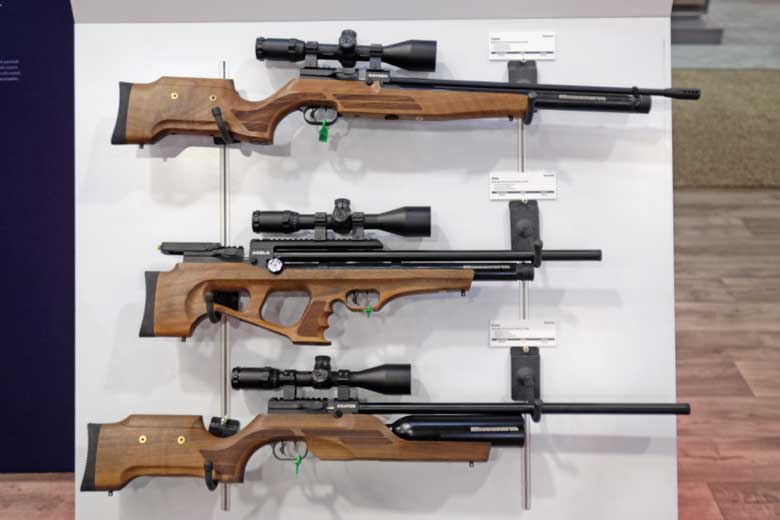 These new PCPs all have a 3,000 PSI fill pressure delivering up to 60 shots per fill, combined with 12-shot rotary magazines in .22 caliber. The model names are – from top to bottom in the photo above – the Benjamin Cayden, Benjamin Akela and Benjamin Kratos.

The Kratos and Akela are mainly differentiated by the HPA tank – tubular for the Cayden and bottle style for the Kratos. 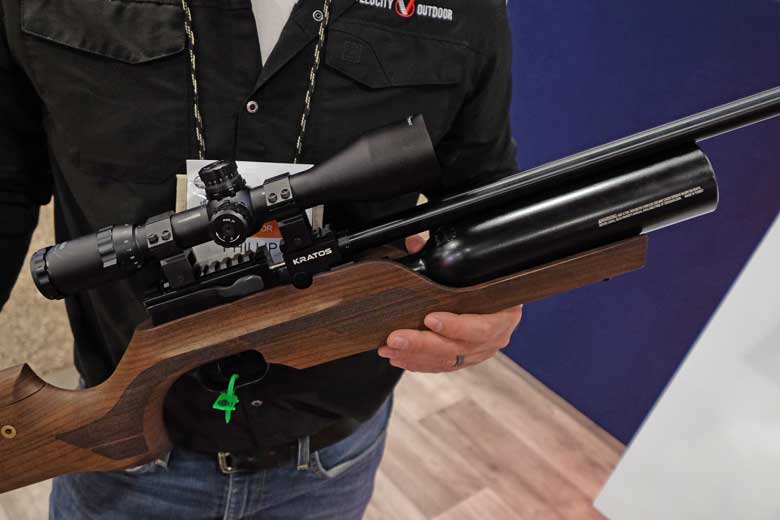 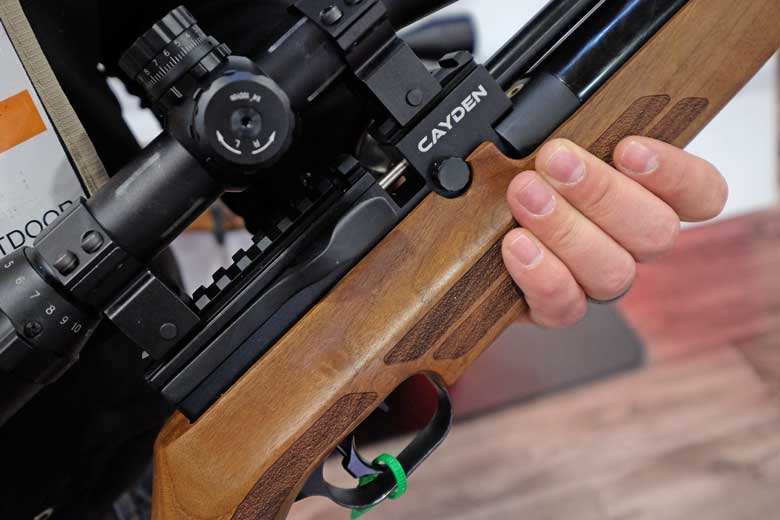 Maxiumum Muzzle Velocity is specified as 1,000 FPS in .22 caliber. The Kratos will also be available in .25 cal producing up to 900 FPS and featuring a 10-shot rotary magazine. 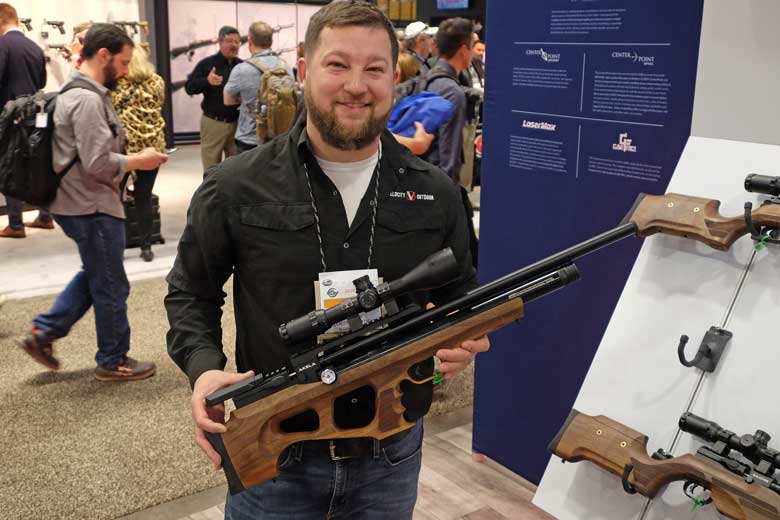 This has an innovative moveable cheekpiece that can be set to a range of positions (and heights), as we can see below. 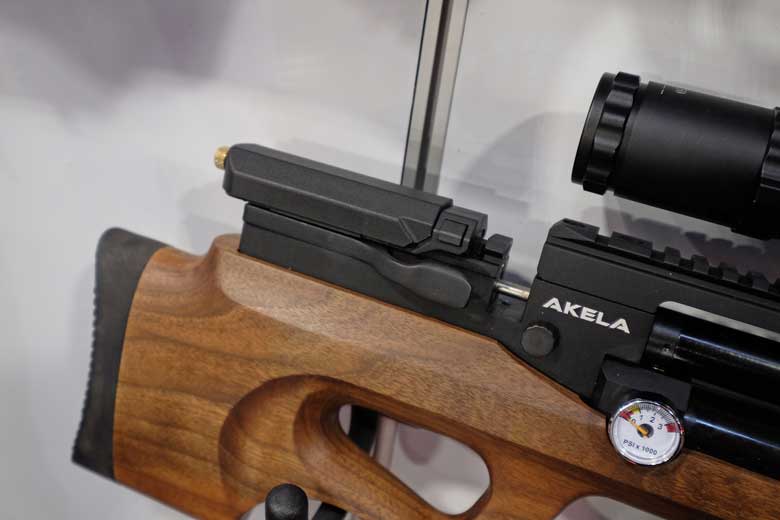 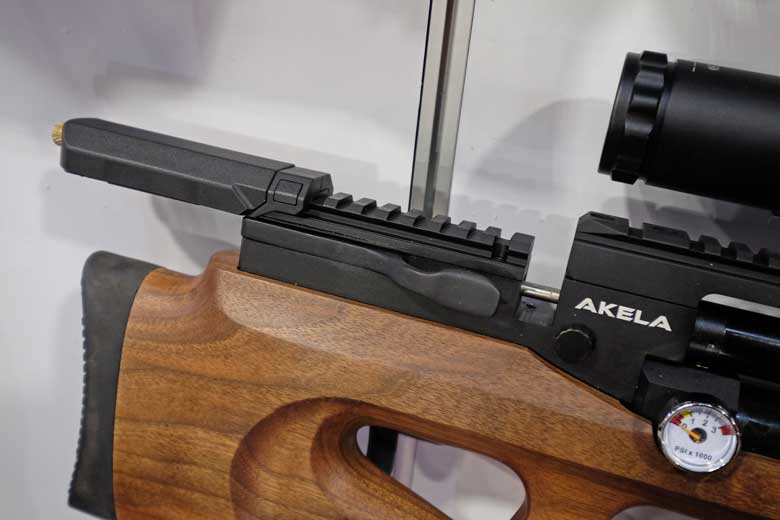 The Maximus, Armada and Fortitude will also continue in the Benjamin PCP air rifle range for 2020. The Bulldog, too.

There’s a lot more new product news from Velocity Outdoor that we’ll see in another post. There’s also a slew of new product announcements from Umarex USA. Many of these have already been pre-announced in Hard Air Magazine, but we’ll be covering them in detail as soon as possible.

Stay tuned for more HAM reports of the latest airgun news from the 2020 SHOT Show! 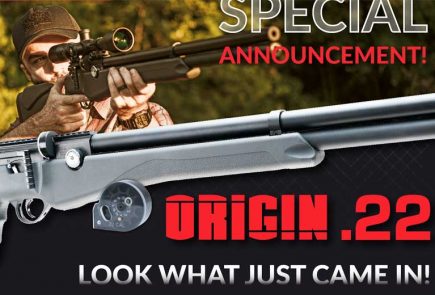 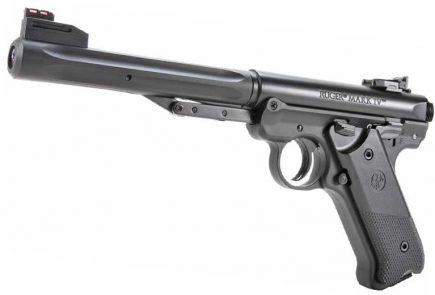 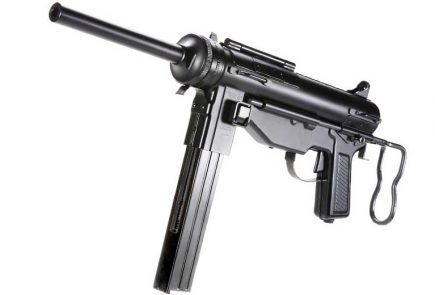