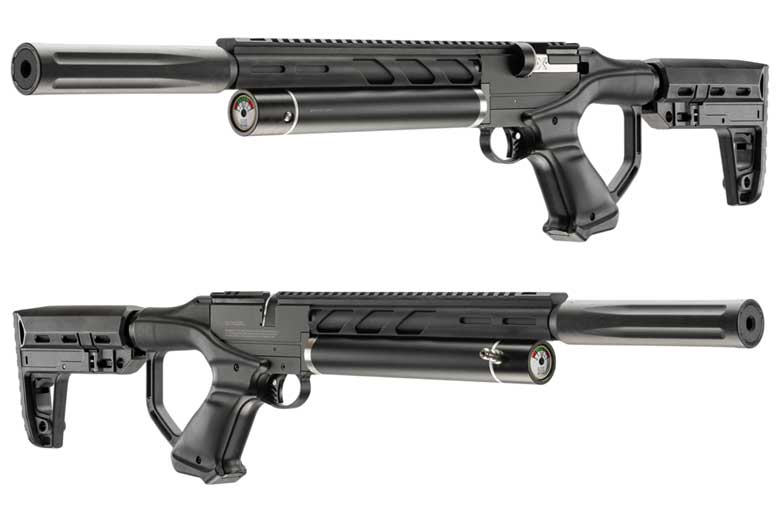 Yet another new announcement at the 2022 SHOT Show was the new Umarex Notos. Umarex USA was undoubtedly the most prolific company with new releases at the show, as you will have seen from the number of announcement posts in HAM.

The Notos is a compact, versatile airgun that’s intended as a compact, easy-to-use PCP that’s powerful for its size. It’s also – almost certainly – the lowest-priced airgun in the market today that includes a regulator as a standard feature.

In fact, the correct, full name for the product will be the Umarex Notos CRK. That stands for Compact Rifle Kit. That emphasizes that the Notos will be sold as a compact carbine – Umarex tells HAM – with accessory pistol grip and open sight kits available for those who want them.

That will enable the Notos to have multiple distinct personalities – as a carbine and a pistol. The forthcoming availability of open sights will be welcomed by many shooters, although it’s likely that most will choose to mount an optic (red dot or compact scope) on the gun’s Picatinny rails. 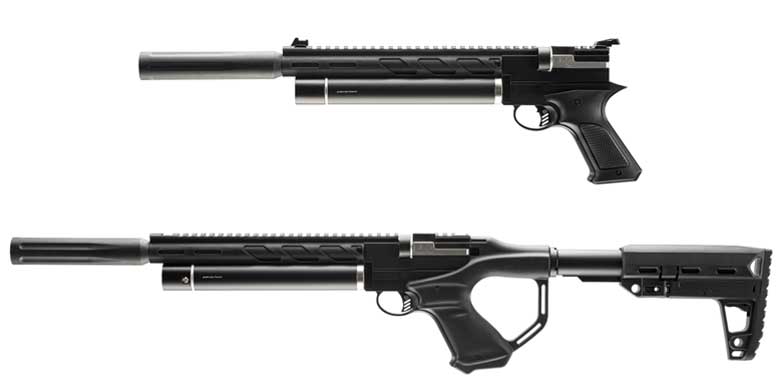 The Notos is to be available in .22 caliber only. Umarex says that the gun can produce a Muzzle Energy of 13 Ft/Lbs with 12 Grain pellets. That will make it ideal for close-range small game hunting and target practice.

The HPA fill pressure is 3,625 PSI (250 bar). In conjunction with a regulator set pressure of 1,900 PSI, Umarex says the Notos will give 21 consistent, full power shots per fill.

Since the Umarex Gauntlet became available in 2017, a regulator has become almost mandatory for any new PCP air rifle. The Notos confirms this at a new low price point…

Below we have a close-up of the Notos in pistol configuration, showing the adjustable rear sight. 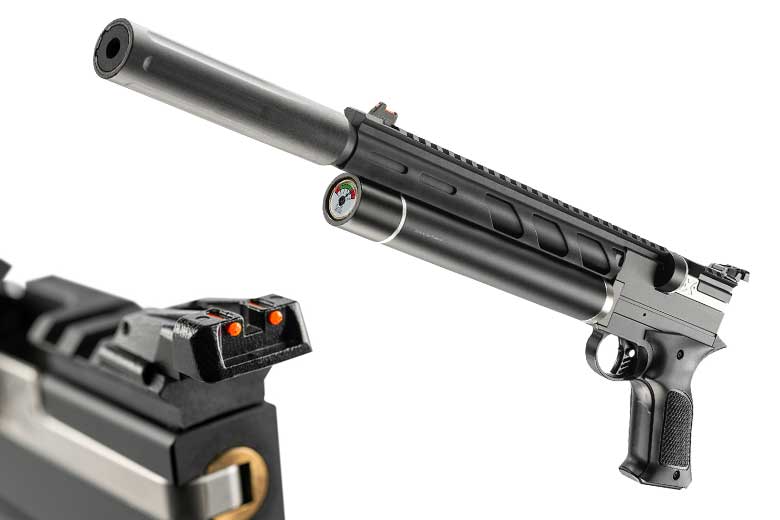 Not only that, but the Umarex Notos is also – so far as the HAM Team knows – the lowest-priced air rifle with sidelever cocking. Wow!

Interestingly, that sidelever is located on the left side of the gun. That probably indicates that the Notos design concept started life as a pistol that could be converted to a rifle, rather than a rifle that’s convertible to a pistol. Left-handed shooters will be delighted, right-handers will undoubtedly get used to it after a while… 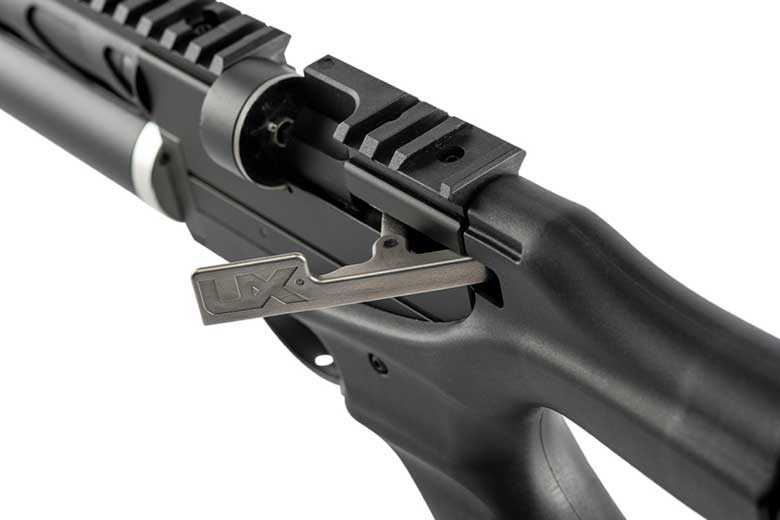 There’s a 7-shot rotary magazine and the Notos will also be supplied with a single-shot tray. There’s also a fully-shrouded barrel that should deliver backyard-friendly report levels.

The rear buttstock is collapsible, although HAM is not sure yet about the number of positions available. 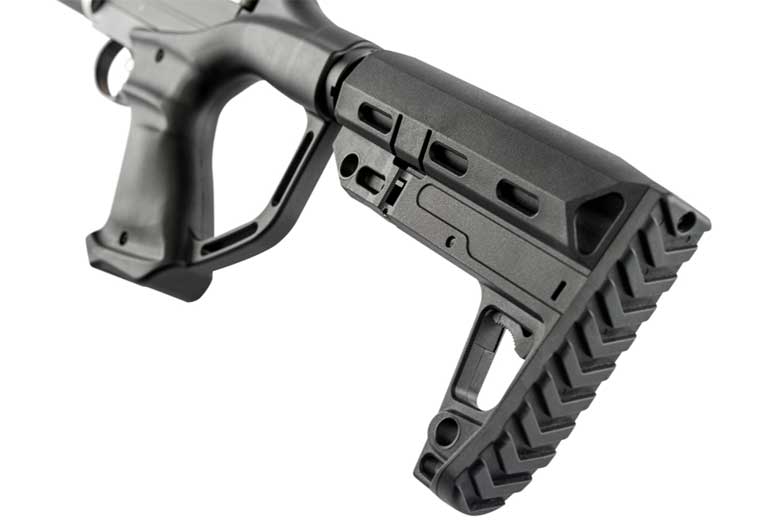 Another – yet another? – good feature about the Umarex Notos is that it uses a male quick disconnect for filling. This is superior – in HAM’s opinion – to the fill probe filling system that’s often used for filling airguns in this position. 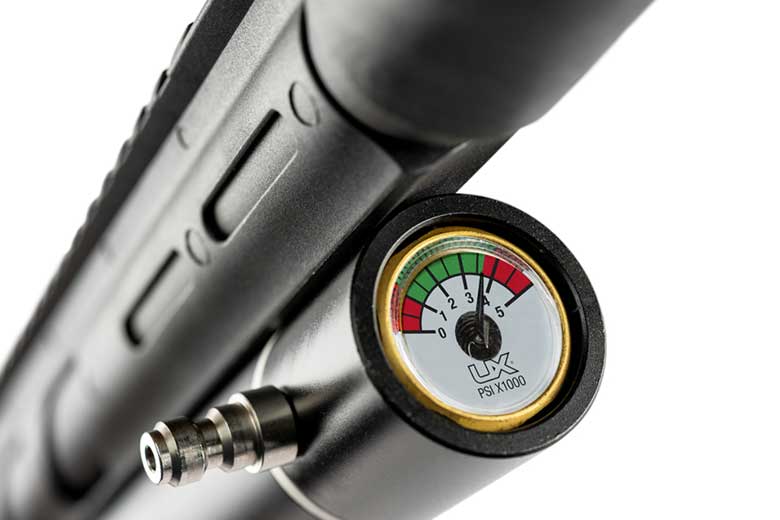 However, users will be well-advised to acquire a cap to cover that exposed fill nipple, to keep dirt and junk out of the gun’s innards. 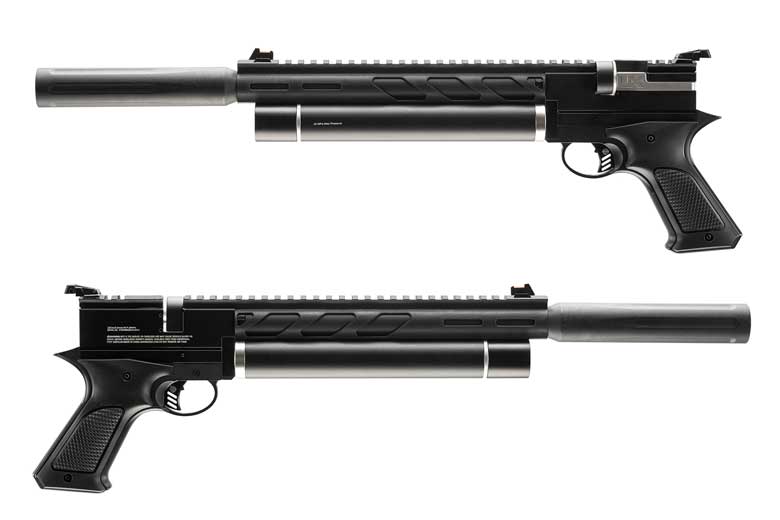 Currently, Pyramyd Air is showing availability in late April 2022 for the Notos. The line starts now…