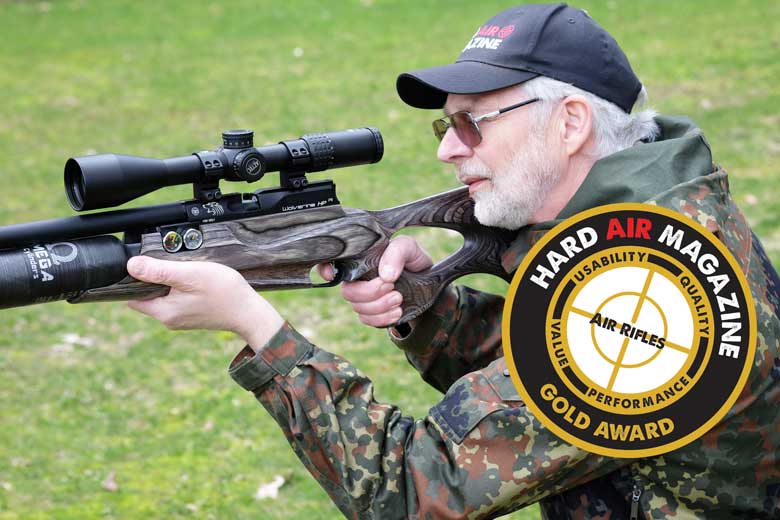 No sling swivels or front Picatinny rail
We'd like an adjustable cheek piece
Really nothing else...

The Daystate Wolverine R is the British manufacturer's top "all mechanical" air rifle.

It offers quality, consistency, accuracy and power. These outstanding attributes are combined with traditional style, beautiful design and the Daystate brand "cachet". That makes a combination that's tough to beat!

As with all the British manufacturer’s products, the Daystate Wolverine R is a premium-priced air rifle. That’s even at it’s current Airguns of Arizona sale price of $1,899.00. The regular price is $2,649.99!

The answer will depend entirely on your own personal opinions and approach to life. If you’re looking for the maximum in specifications, power and adjustability – the most bang for the buck – then the answer is clearly “no”.

However, Daystate is not aiming for this market. The Wolverine R is designed specifically for a different user group.

These buyers prioritize sophistication, quality, feel and looks. Sure, they also want power and accuracy – don’t we all? But they place a greater emphasis on intangibles.

They want an exclusive product from an up-scale manufacturer that oozes sophistication and looks like a work of art. They want it to be range-ready straight out of the box, without the hassle (as they see it) of tuning and tinkering for optimum performance.

That’s what the Daystate Wolverine R delivers. In Spades!

If you have the budget and desire to accompany this approach to airguns, there’s no doubt about it. You’re sure to be impressed with everything about the Wolverine and will continue to enjoy the pleasures of ownership long after memory of the cost has gone. That’s what will make it great value for you…

However, .25 caliber airgun shooters are certain to be much more interested in the Muzzle Energy that the gun attains. Here, maximum power was achieved – unsurprisingly – with the heaviest pellets in the standard HAM test suite.

The 33.95 Grain JSB King Heavies delivered 54.4 Ft/Lbs of Muzzle Energy. They also combined this with the best accuracy, as can be seen from the chart below.

Accuracy was also excellent with the 25.39 Grain JSB Kings and the 27.80 Grain Benjamin pellets. Very good accuracy was also demonstrated by the Predator Polymags – good news for hunters, that – and the light (for .25 caliber) Predator GTO alloys.

We then shot the Wolverine with 33.95 Grain JSB King Heavies at 25 Yards. The result was an outstanding “one hole” group as you can see below. (That’s probably the best group I’ve ever shot at 25 Yards). 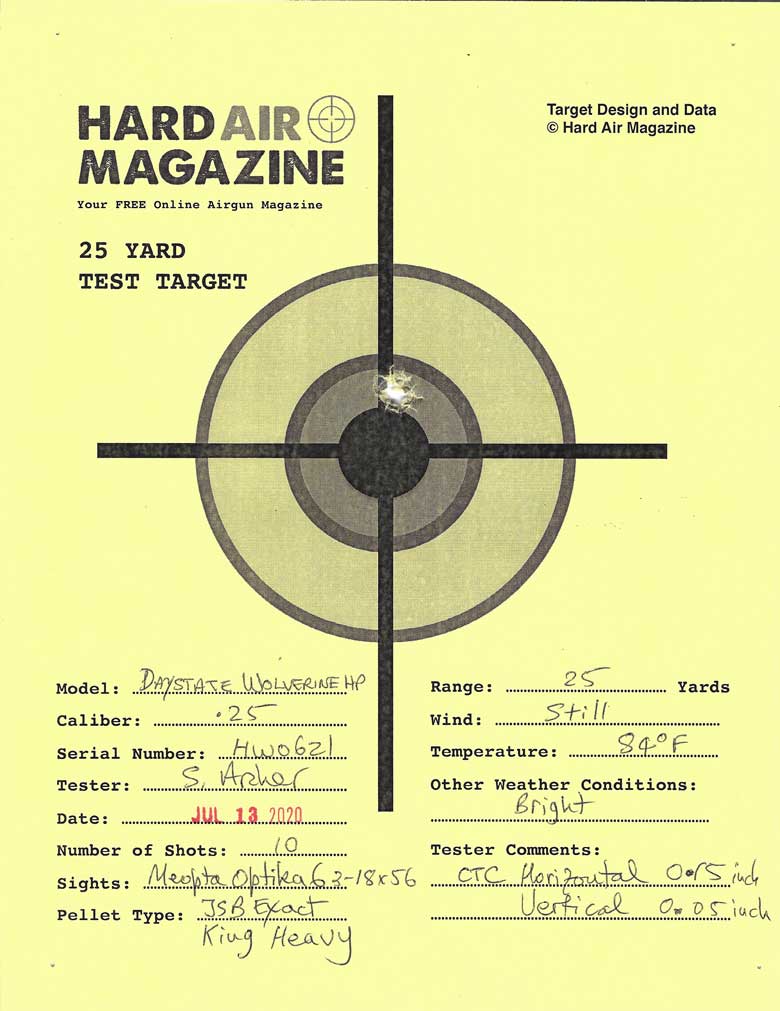 As was expected, the two-stage trigger of the Daystate Wolverine R tested by HAM was a delight to use!

With an average trigger pull weight of 1 Lb 0.8 Oz, it was very light, yet still managed to have a distinct first stage. There was plenty of take-up before reaching the “wall” but – at that point – there was a “glass break” release. Just about no additional pressure seemed to be required to release the sear…

This out-of-the-box trigger performance would be ideal for long-range target shooters and many others, too. Hunters may prefer a somewhat heavier pull: this can be achieved with a simple adjustment, if required. As always, HAM tested the trigger in the condition we received it. We liked it and would make no changes if we owned this Wolverine. 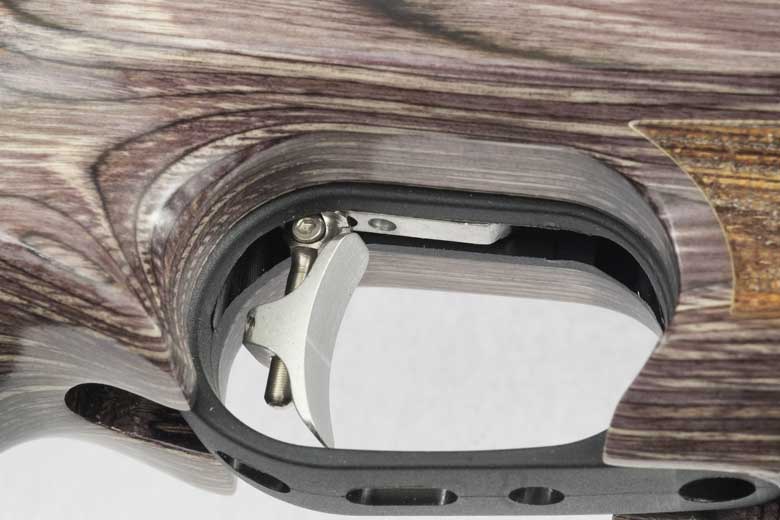 Sidelever cocking was a similar delight. The action was fluid and smooth. Cocking this Wolverine was a pleasure!

The lever swings wide open with just about no pressure. Then there’s a small further angle – maybe 10 degrees – where the cocking effort actually takes place. 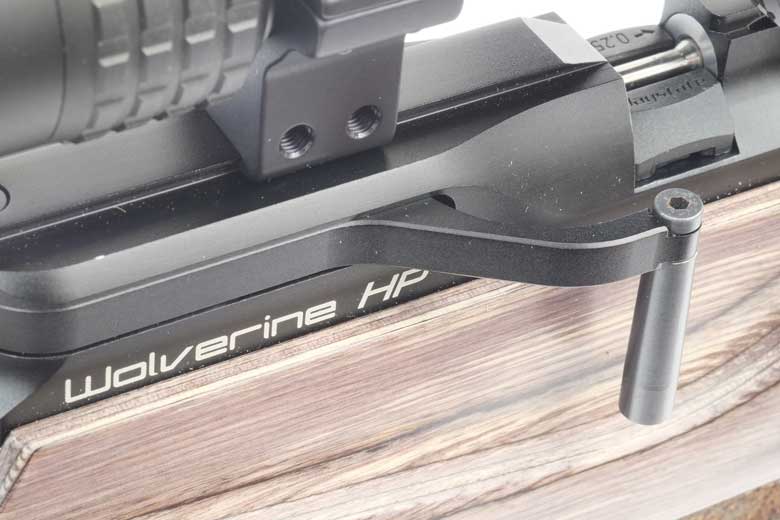 The manual safety is situated at the rear of the receiver. This is an ambidextrous location, for sure. It can also be easily seen with a brief downward glance before pulling the trigger.

We were a little surprised, however, that there’s no definite detent or other “click” positioning to retain the lever in either position. This didn’t cause us any issues in operation, it’s just something we intuitively expected. 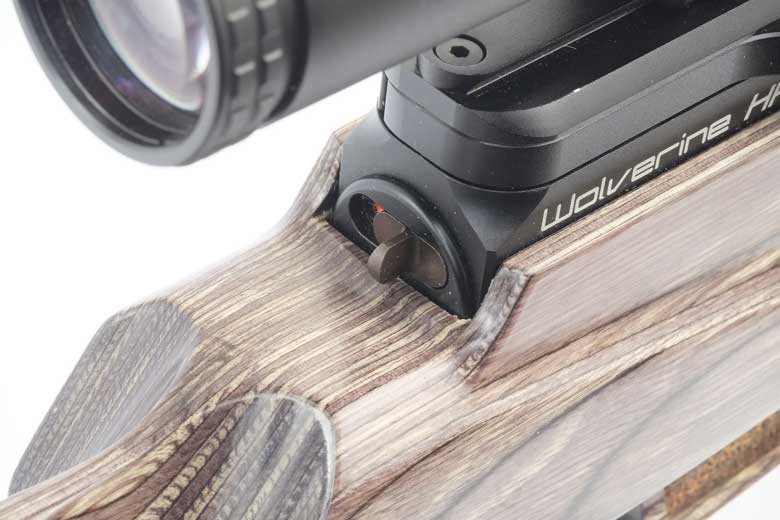 Daystate does not specialize in broadcasting specifications for its models. However, it does specify the maximum Muzzle Energy for the Wolverine R as 50 Ft/Lbs in HP (High Power) form. That’s the version being tested in this review.

As we saw above, the Daystate Wolverine R tested by HAM produced a maximum of 54.40 Ft/Lbs. That’s a handy 4.4 Ft/Lbs more than the manufacturer’s specification.

However, that increase in power was certainly bought at the cost of shots per fill. The 38 consistent shots we achieved on test would be typically achieved using the standard 480cc bottle at the 180 Bar regulator set point. 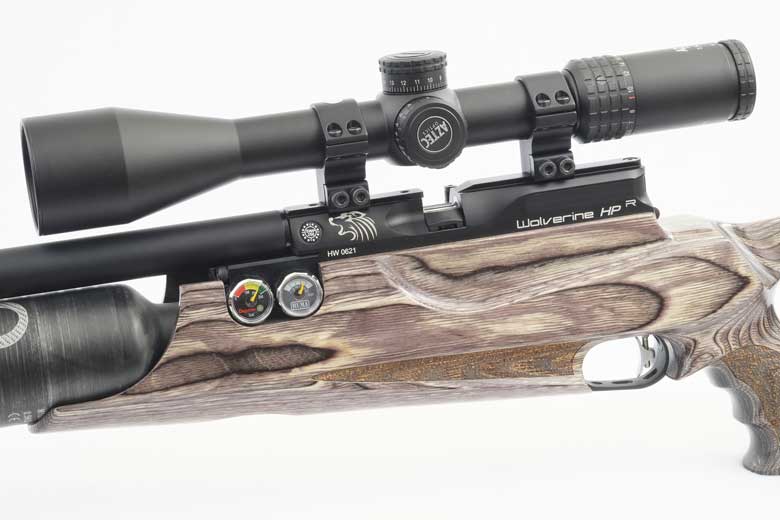 Trigger pull weight varied by a maximum of only 2 Oz across seven shots. That’s an imperceptible difference for any of us!

The Standard Deviation (shot-to-shot consistency) across the range of standard HAM test pellets was just 3.06 FPS. Again, that’s a very low figure. Of course, credit for this is largely due to the Wolverine’s combination of Slingshot hammer system and HUMA regulator. 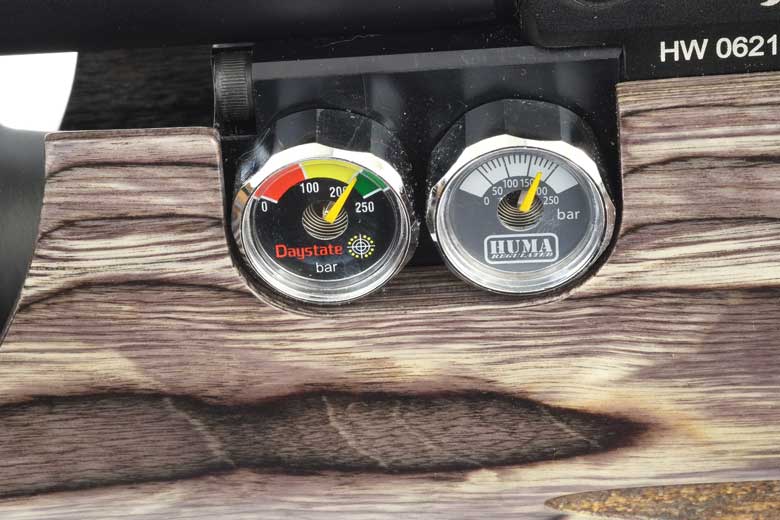 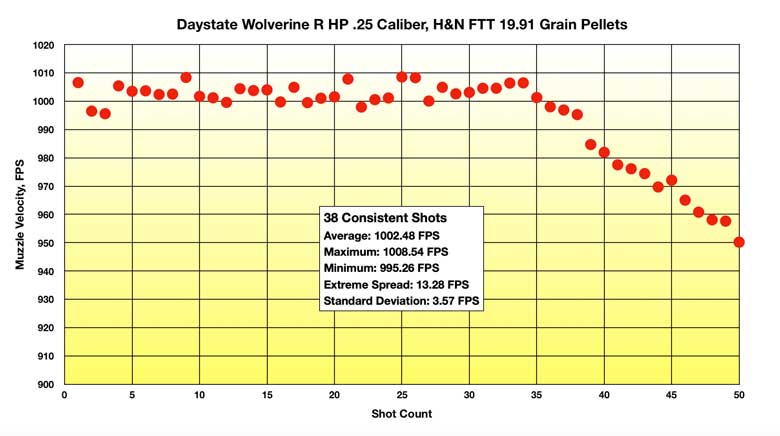 As we can see from the graph above, the Extreme Spread for these consistent shots was a mere 13.28 FPS. That equates to a Standard Deviation of just 3.57 FPS. This is very impressive over that number of shots with unsorted pellets!

The Daystate Wolverine R ships with a built-in shrouded barrel. This manages the firing report to acceptable levels for a powerful .25 caliber air rifle. It may not be completely backyard-friendly in .25 caliber, but undoubtedly the smaller-caliber models would be.

However, removing the threaded barrel nut and adding the 0dB silencer that was supplied with the test gun, takes the noise level to a completely different level. The result is amazingly quiet for the level of power generated by the Wolverine R! 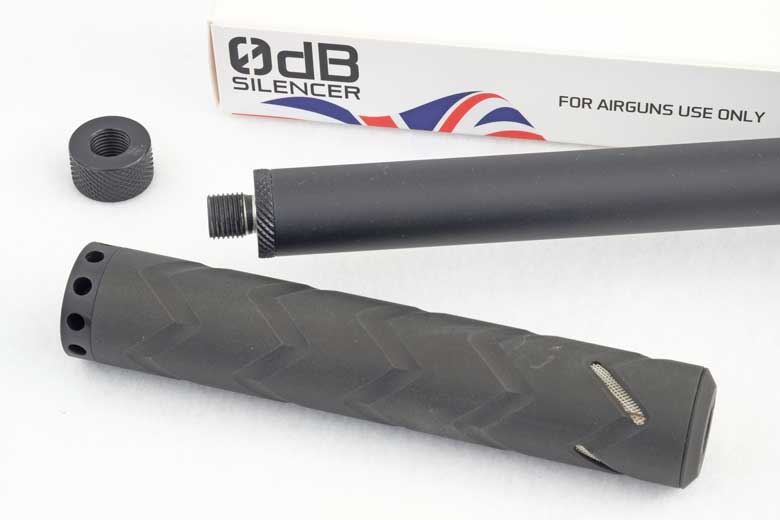 As with all high-end air rifles, the Daystate Wolverine R is supplied with no sights or optics. The breech has dovetail rails machined into it, of course, for scope mounting.

The use of Medium rings prevented the Wolverine’s magazine from fitting under the scope. We were happy to use the single shot tray that accompanies the air rifle. However, for us, magazine usage would require High rings this combination.

Owners with different eyesight may have the scope positioned further forward or back, allowing the use of Medium rings with the magazine. 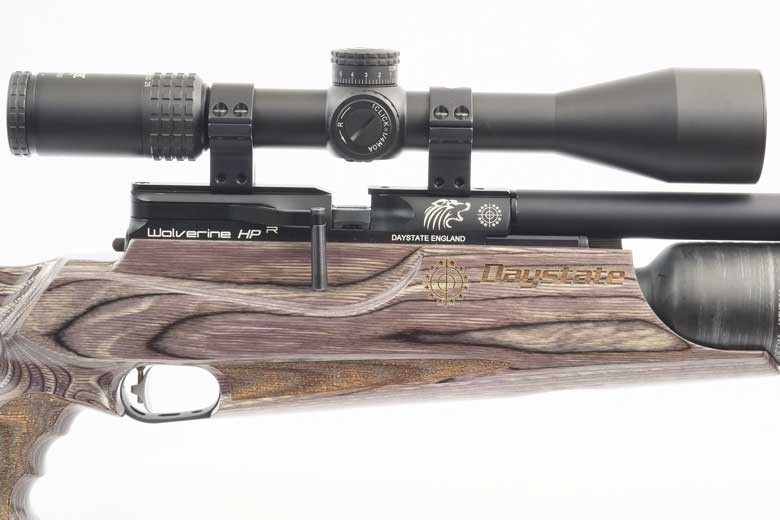 So why didn’t we simply fit High rings? Because we wanted to keep the scope as low as possible above the bore to keep the cheek weld.

Yes, we could have adjusted the buttpad, but we much prefer an adjustable comb for the buttstock and the Wolverine’s beautifully-sculptured stock doesn’t have this capability.

This is not a light air rifle. In fact the Daystate Wolverine R tested by HAM – including scope and high-capacity HPA bottle – was 11 Lbs 2 Oz. However, this is one of those guns which genuinely does not feel so heave when you actually shoot it.

Undoubtedly, this is due to the outstanding balance. Even with the high-capacity HPA bottle, our Wolverine balanced perfectly with the stock balanced on the leading hand just aft of the gauges.

The sheer pleasure of operating the bolt and trigger is difficult to overstate. This made the whole shooting experience a real sensual experience of great enjoyment.

Yes I know that may not be a very objective statement, but it’s true! After all, we buy airguns to shoot and if the act of shooting becomes somehow special for tactile and operational reasons, then that’s a great benefit that can’t be ignored. (It’s also really, really difficult to convey in words. You really have to experience it yourself). 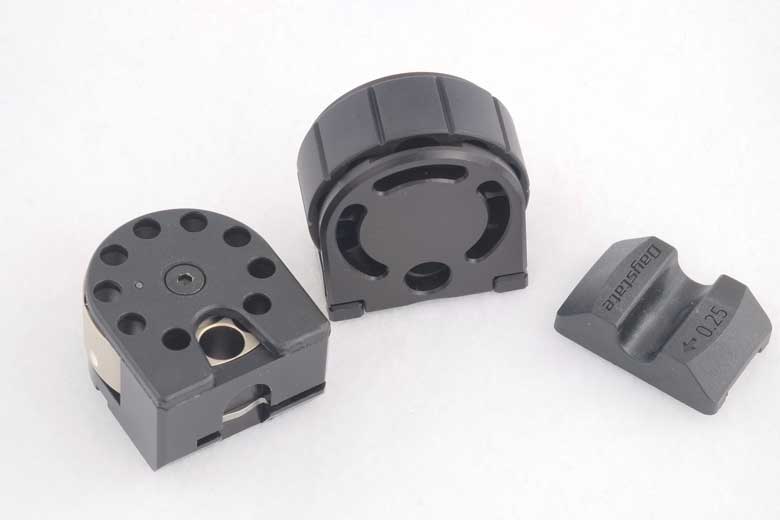 The Daystate Wolverine R can be fed using the single shot tray. It also accepts either of the Daystate magazines – both the traditional and the new “gate load” model.

The magazines snap precisely into place under the effect of a pair of magnets, as does the single shot tray.

Although the Wolverine handles well for such a large, heavy air rifle, it would benefit from sling swivels to relieve the burden when carrying in the field. Or at least factory-installed swivel studs as a standard feature. (It would be a brave owner who drills that beautiful stock to fit studs themselves!).

Also it would be very useful to have a short Picatinny rail, or other mounting system, to mount a bipod under the forend. Yes, we understand that’s difficult given the beautiful lines of the stock and the HPA bottle position. But it would definitely be advantageous for supported shooting.

Left-handers will find that the Wolverine’s ambidextrous stock can be combined with left-hand lever cocking. It’s easy to accomplish, as this AoA video shows…

If we could award the Daystate Wolverine R more than 100% in this category, we would!

As is expected from the company, finish was flawless in all respects. All metal parts were perfectly machined, polished and finished. The side-by-side pressure and regulator gauges were exactly aligned – a level of detail that symbolizes the level of craftsmanship that is self-evidently applied throughout the gun.

The same was true for the Minelli laminated stock. This too was flawlessly finished.

True, this is what you expect from a product of this price. However HAM Tester Doug Rogers – a highly experienced machinist by profession – was moved to remark that “everything is first rate” in his test notes. That’s high praise indeed from him! 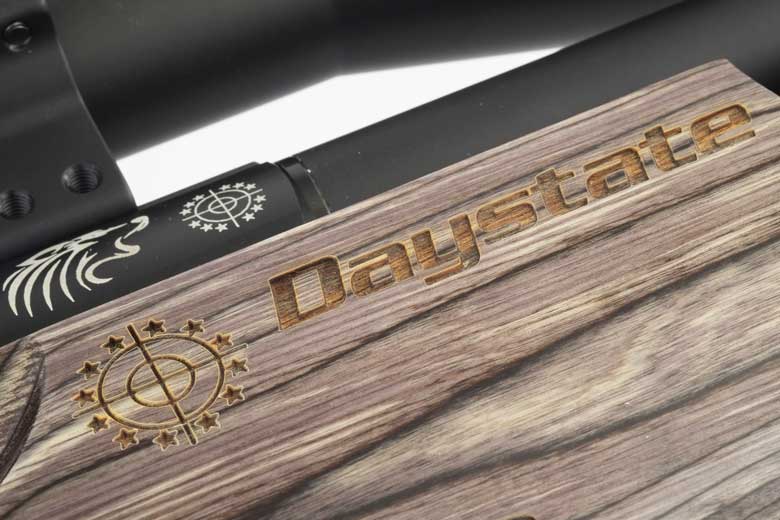 As a product firmly positioned in the luxury end of the air rifle market, you’ll need to contact a specialist retailer to buy a Daystate Wolverine R. But it’s readily available from Airguns of Arizona and many Precision Airgun Distribution dealers across the USA.

The Wolverine has a 5-year warranty that’s transferable to a second owner, should you sell the gun. US warranty coverage is provided by Precision Airgun Distribution in Arizona.

The Wolverine is filled using the built-in quick disconnect. This is accessed through the underside of the stock and uses an extra-long female quick disconnect that’s supplied with the gun. Ingress of junk into the quick disconnect is prevented by a clever cap that snaps into place using magnets. 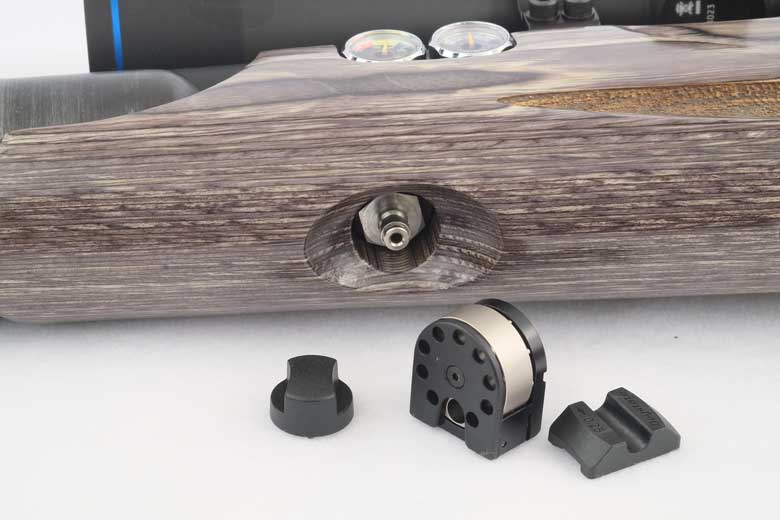 Of course, the owner also receives Daystate’s usual beautiful collection of literature (user manual etc), together with one magazine, and a single shot tray. 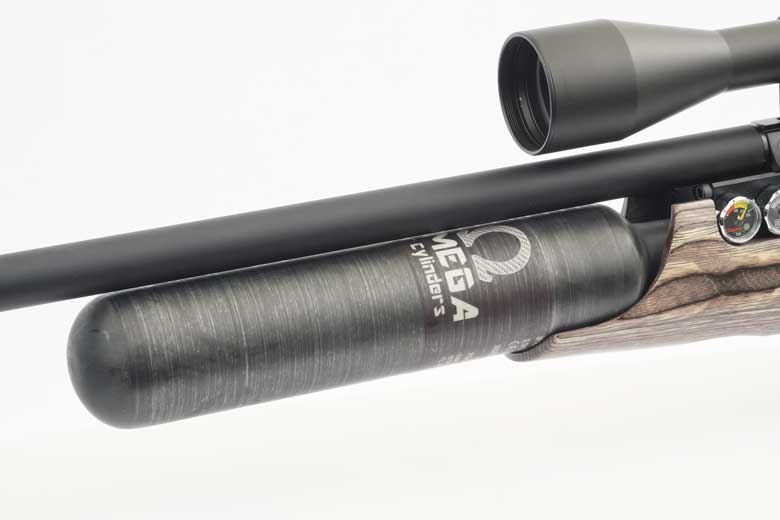 There’s a small number of upgrades available for the Wolverine, including the high capacity Omega HPA bottle and 0DB silencer featured in this review. Basically, however, the Wolverine is designed to be a complete, precision shooting device “as is”, without the need for further accessories. 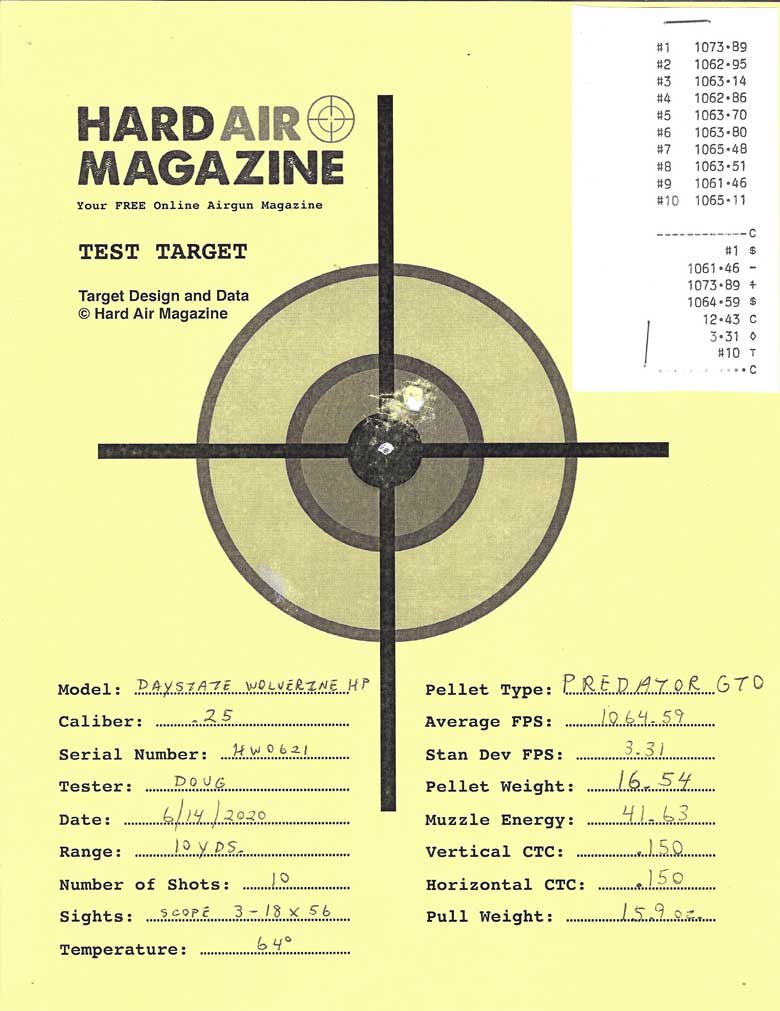 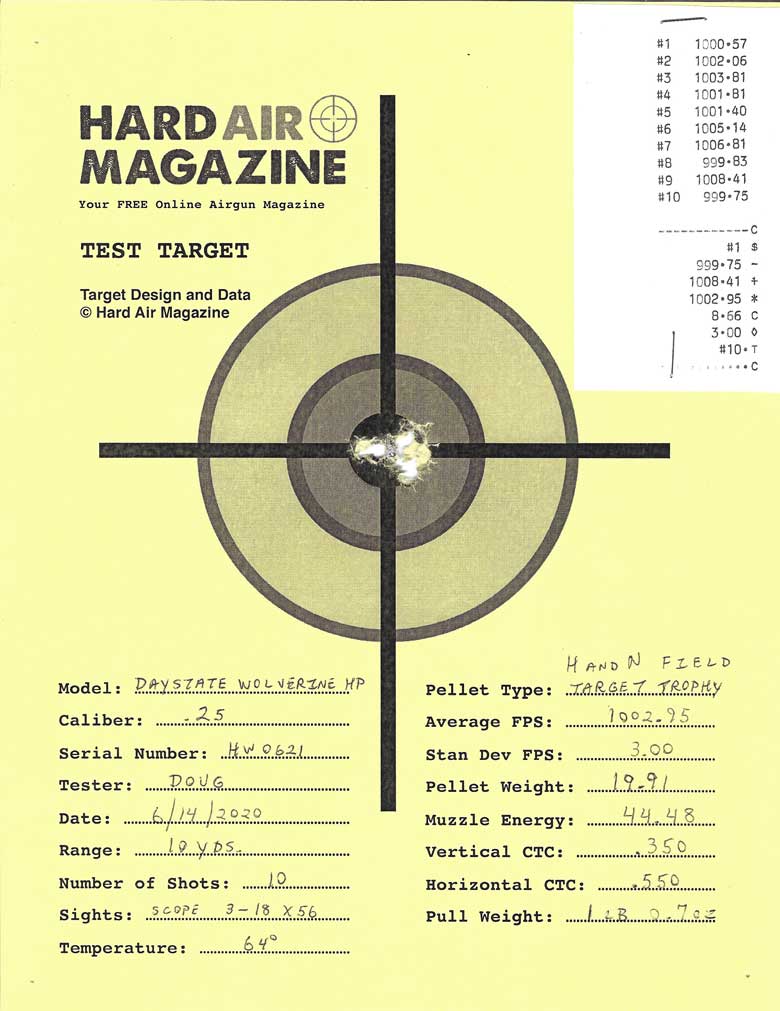 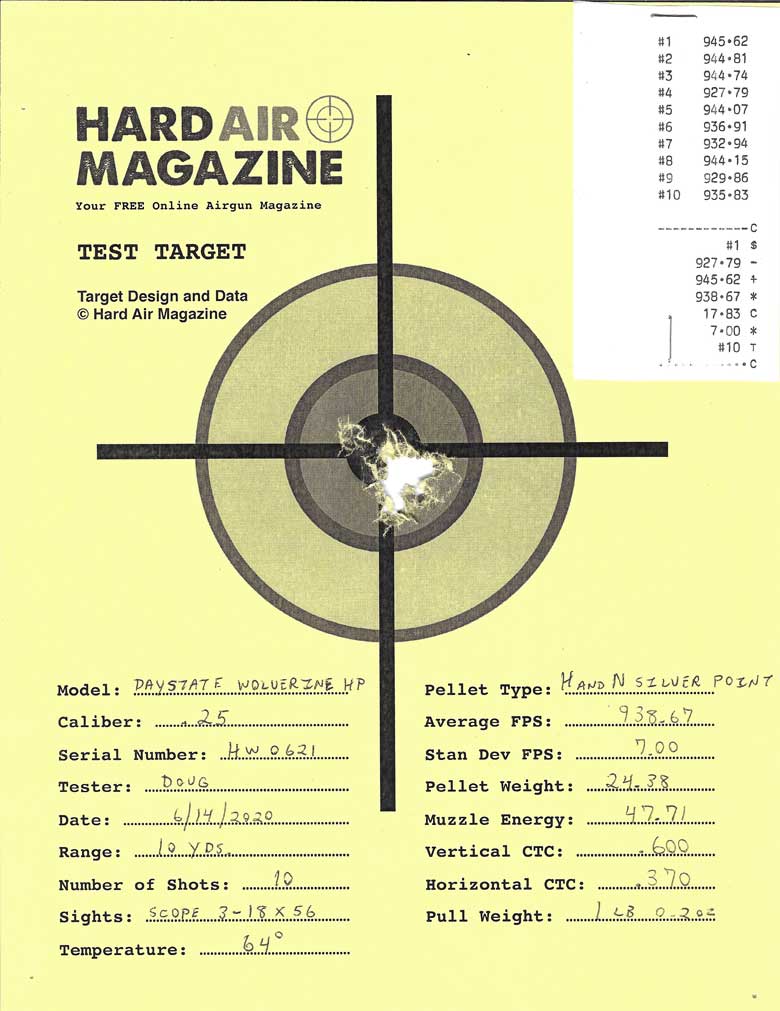 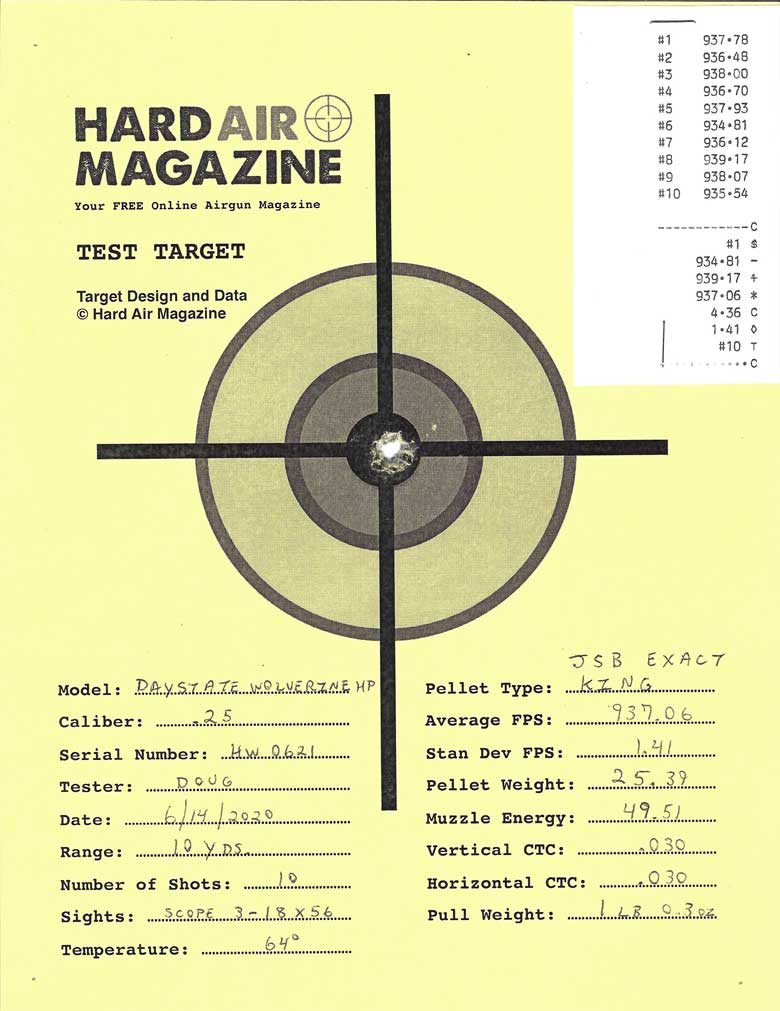 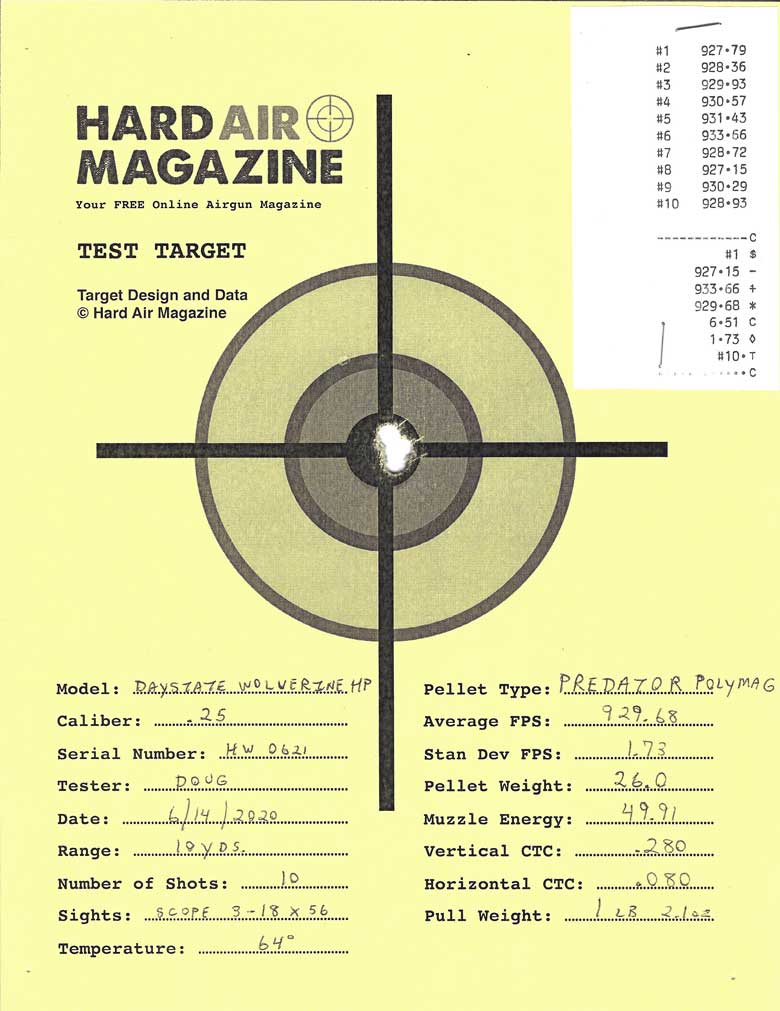 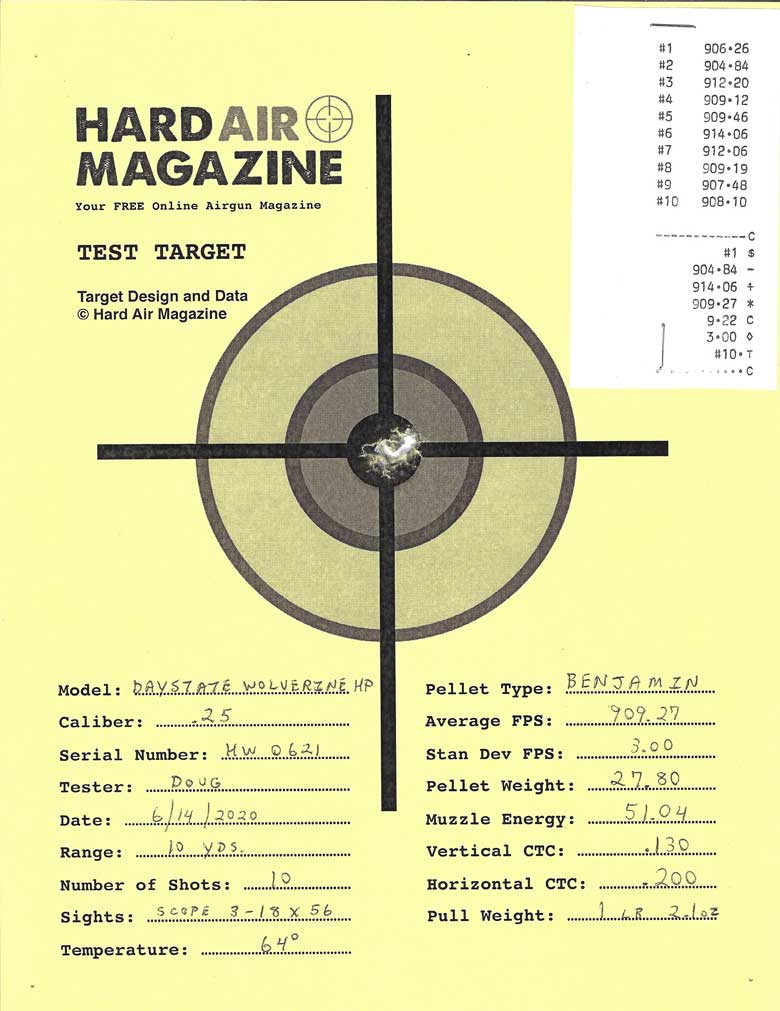 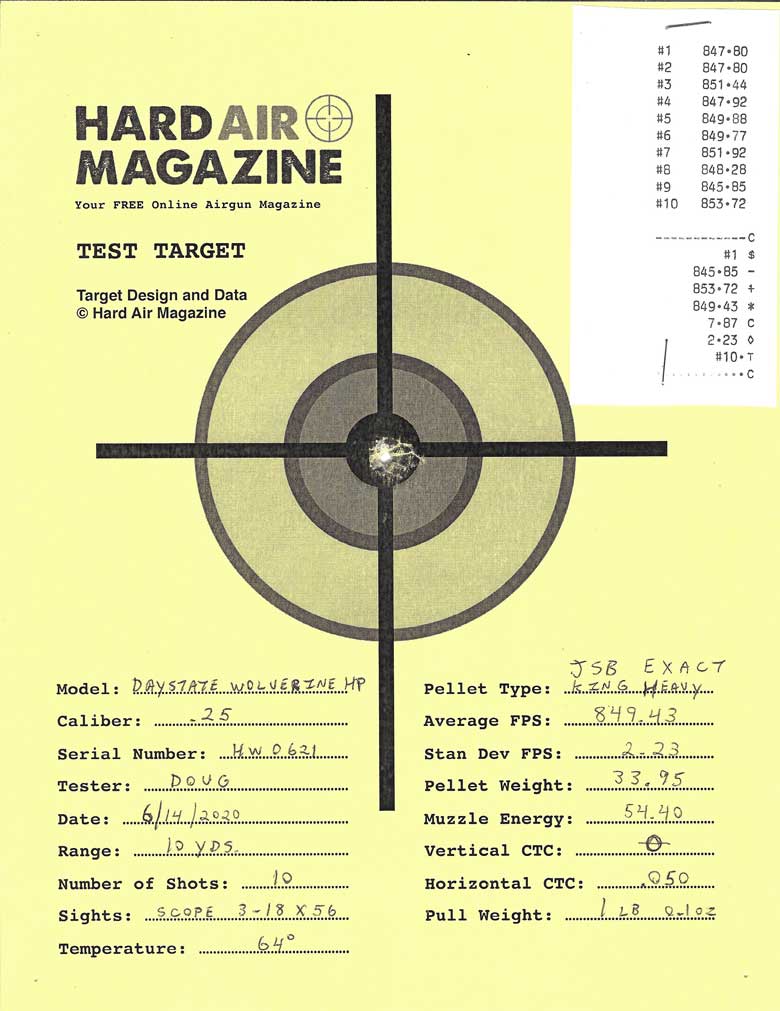