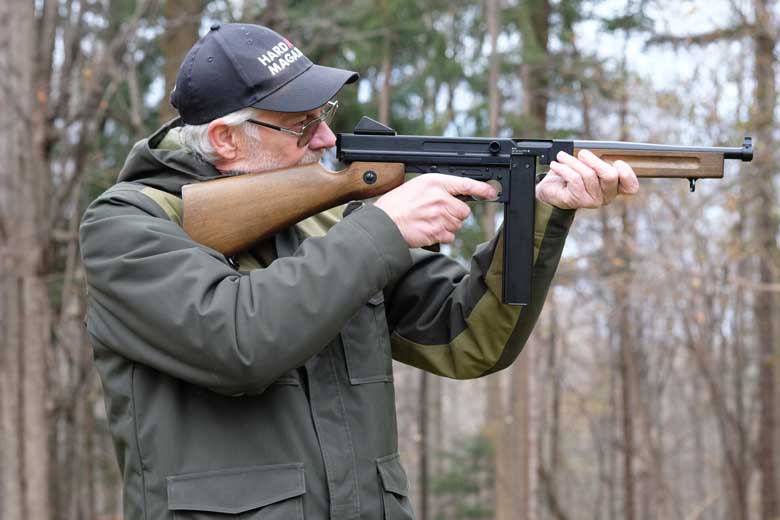 In this HAM exclusive story, we get an exclusive first look at the forthcoming Legends full auto BB Tommy Gun!

This is the military M1A1 version of the iconic Thompson sub-machine gun. It’s BB-firing, of course and is a very realistic representation. If you already have the outstanding Legends MP40, this will be an ideal companion! 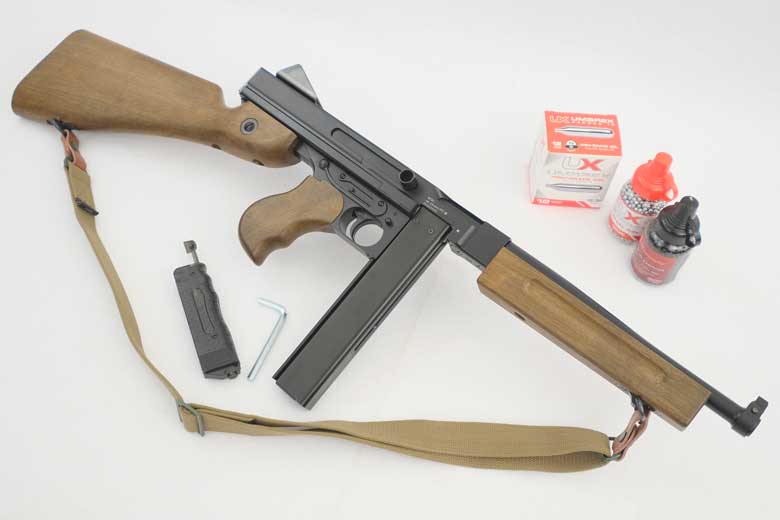 The Legends full auto BB Tommy Gun has a blowback action and 30-round magazine. Like the M1A1 original it is fitted with sling swivels.

The sling itself is not included, but we mounted a web sling for fun, as you can see above. It looks good and stops the sling swivels from clattering when the gun is handled.

As a selective-fire BB gun, both semi- and full-auto operation is available. Selection is made using the “fun switch” on the side of the receiver. 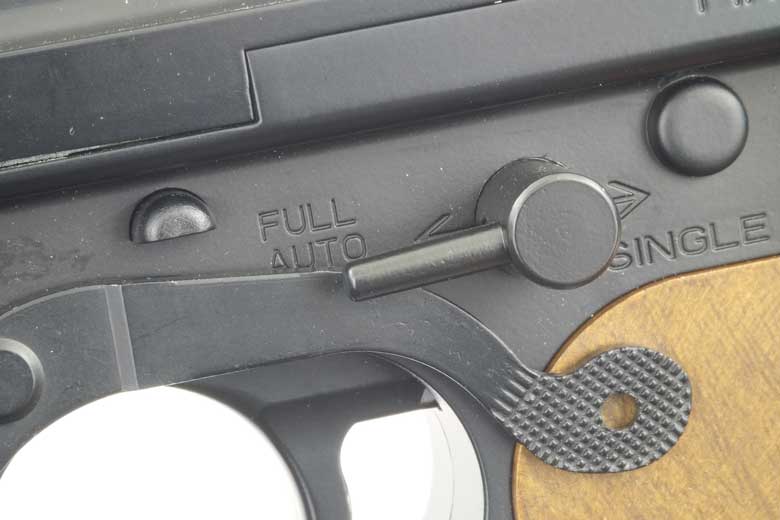 The extreme realism of the Legends BB Tommy Gun is enhanced by the ultra-realistic wood effect of the synthetic stock and pistol grip parts. There’s clear wood grain and even the effect of sanding on the parts. It really is difficult to tell that these parts are nor made from “real tree wood”! 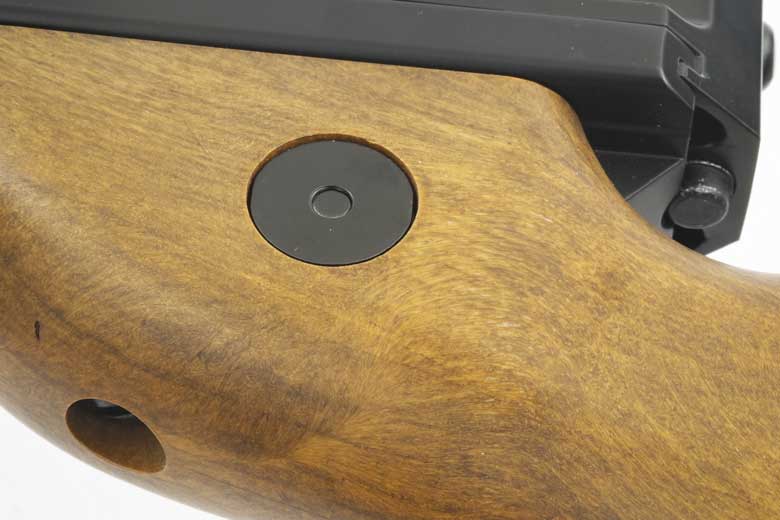 HAM has received a very early pre-production model. The serial number is “009”, as you can see below. But the product works well and is clearly ready for prime time. It’s clearly slated for release in the first part of 2020 – as claimed by Umarex. 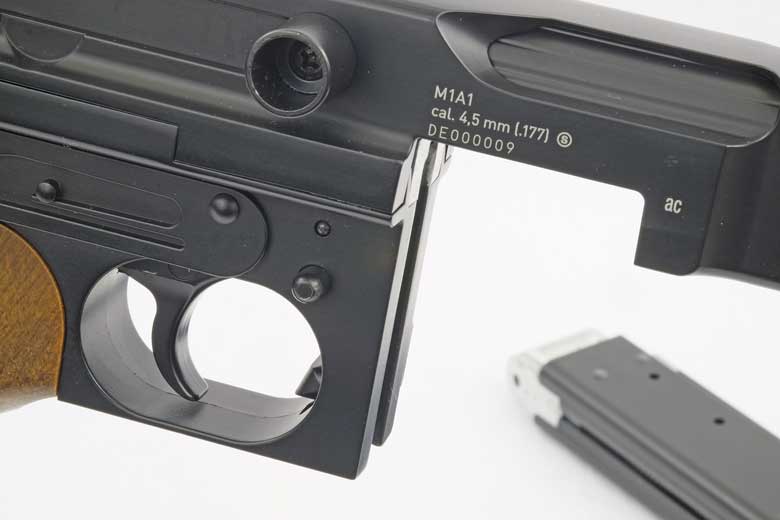 The drop-free magazine holds 30 BBs, together with two 12 Gram CO2 cartridges. This mag is similar – but not identical – to that used in the MP40. HAM believes that a BB speed loader will be included. If not, buy one. You’re going to need it! 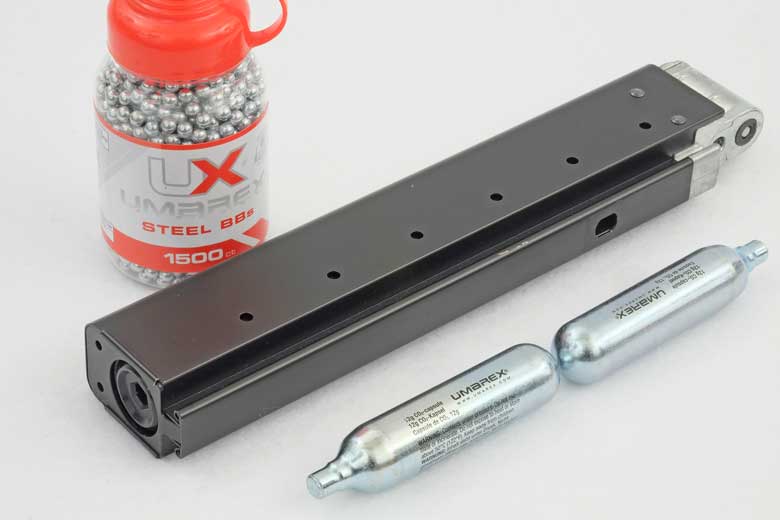 The iron sights are simplistic – just like the M1A1 originals. But let’s face it, the Thompson was never intended to be a long-range sniper-grade unit. If you don’t hit the target with the first shot, it’s even more fun to just keep on firing! 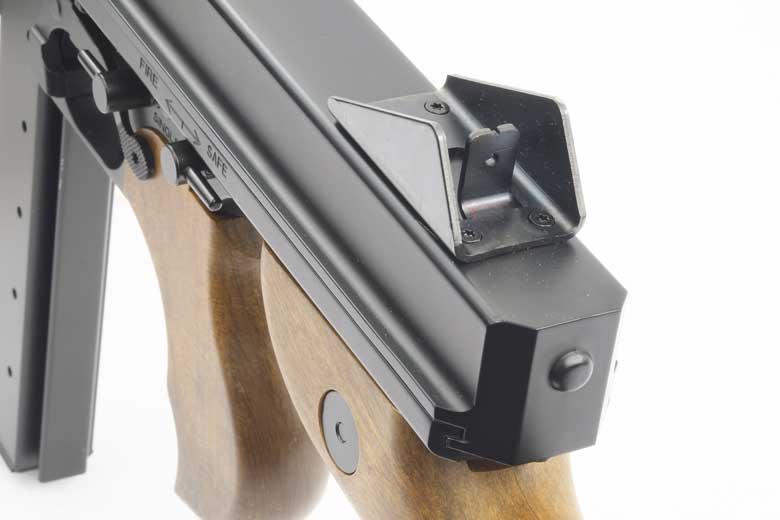 Like the MP40, the Legends full auto BB Tommy Gun is not field-strippable. However, that’s a small price to pay as everything else looks amazingly realistic. 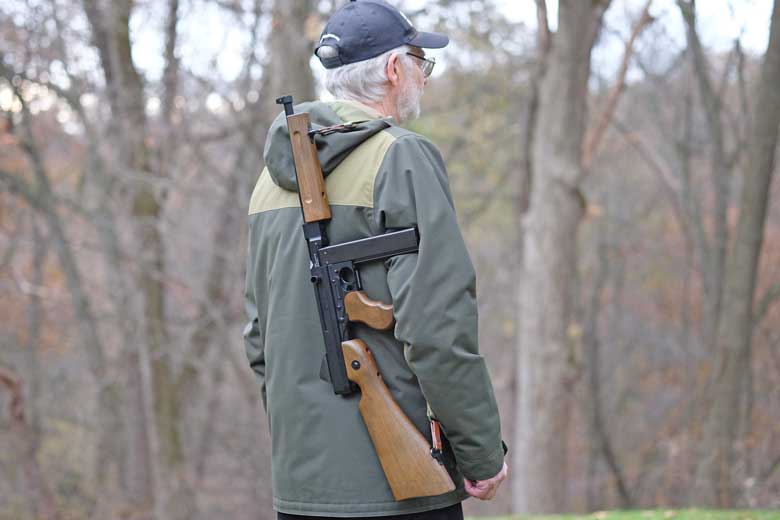 It’s now being advertised by online dealers and you can pre-order the Legends M1A1 from the Umarex USA website.

In initial HAM testing, this full-auto BB Tommy Gun certainly looks and feels the part. Apparently it can be fired single-shot in semi-auto mode, although we’ve been having too much fun in full auto 🙂

HAM specialist tester Doug Wall will be testing this gun very soon. Look out for the full HAM review in the near future!