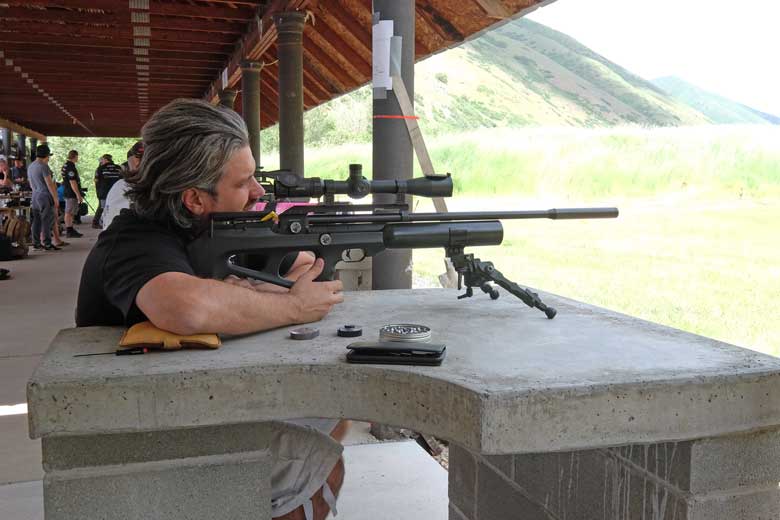 Of course, RMAC is about the competition. But there’s also plenty of new products breaking ground at the 2019 Rocky Mountain Airgun Challenge. Let’s look at some of them…

Jon Elvegaard-Tueller from FX Airguns USA was shooting a previously un-announced new air rifle in the 100 Yard competition. That’s him in our photograph above.

This is another model from the amazingly-versatile FX DreamLine range. It’s actually a 30 caliber Dream-Pup Bottle with 700 mm barrel. Jon was certainly shooting well with it! Here’s a close-up… 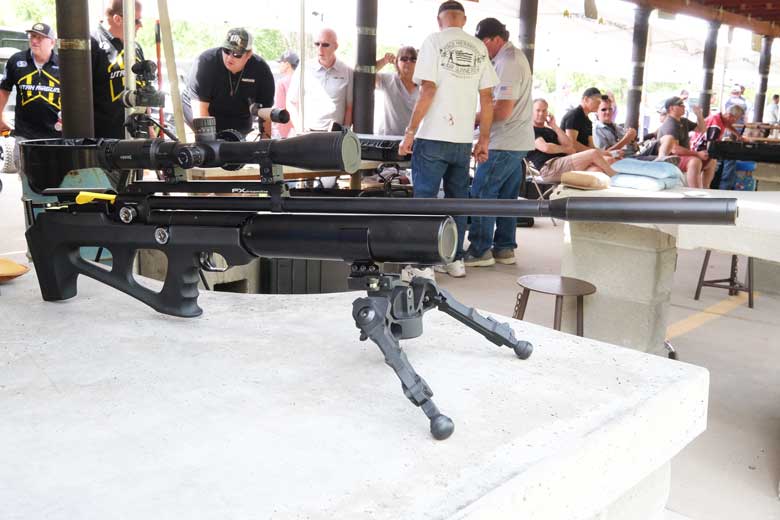 Bipod and scope are not included with the airgun, of course.

Meanwhile Giles Barry of YouTube’s AirgunGear Show was also shooting with great success in the RMAC 100 competition with this new FX Crown Continuum. The Continuum has a black-and-yellow laminated stock and is supplied with two barrels (short and long) for only $100 more than a regular Crown.

Giles view of the Crown Continuum was that “It’s bonkers good!” US readers will probably need a translation of this phrase.  “It’s beyond awesome” would probably be a fair approximation… 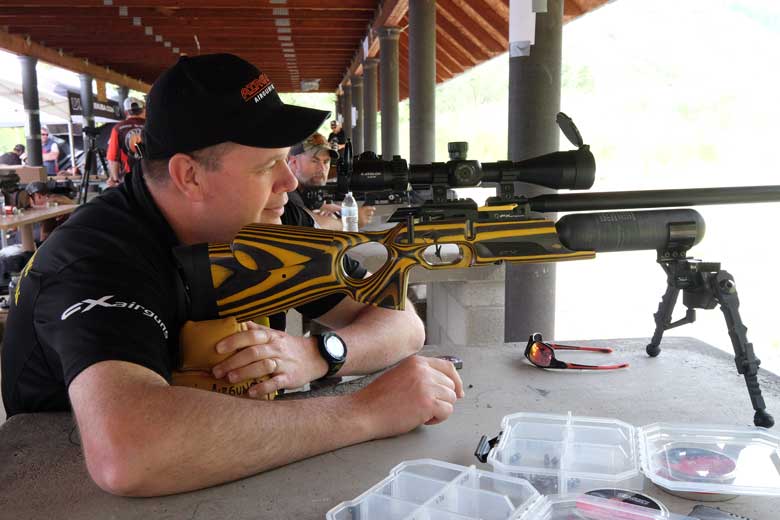 Among other new products at the 2019 Rocky Mountain Airgun Challenge, it was interesting to see a growing number of small companies producing aftermarket enhancements for FX air rifles.

One example is Kraford and Lypt. Stephen Greenfield showed me their adjustable buttplate and cheek rest that they are making for the FX Impact. 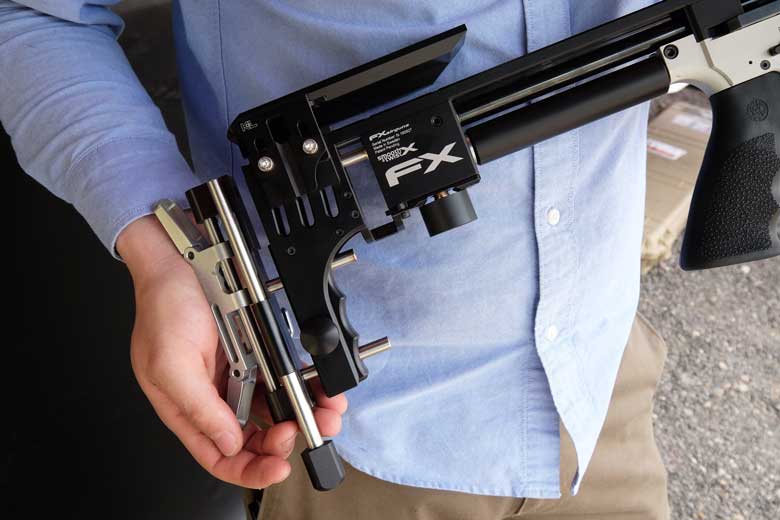 Stephen also showed me a prototype adjustable scope rail for the Impact. This allows the owner to give a variable amount of droop to the rail. The angle of droop is easily adjusted using a built-in calibrated setscrew mechanism.

This drooper rail allows the Impact to be used for long-range shooting without the need for high rings – as is often the case. 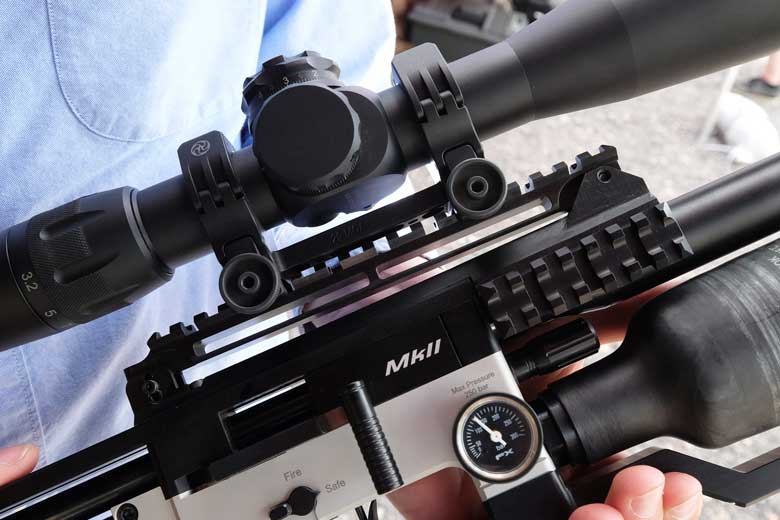 Well-known competitor Val Simmons was shooting a prototype of his slide action conversion for his dual-tank FX Impact. Yes, you read this correctly!

There’s a chance that this very innovative conversion could make it into production some time in the future. 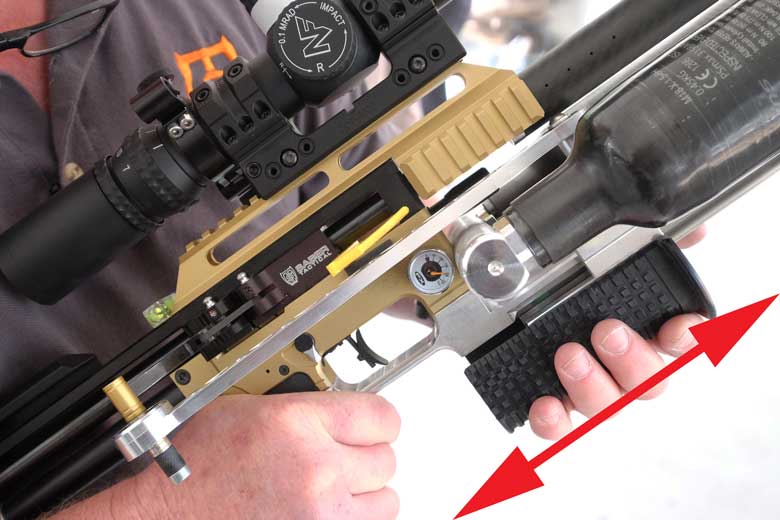 On a completely different front, master leathermaker Chuck Misenheimer showed me two beautifully-tooled leather custom pellet pouches that he is making. They are functional, stylish and have Chuck’s loving attention to detail all over them! 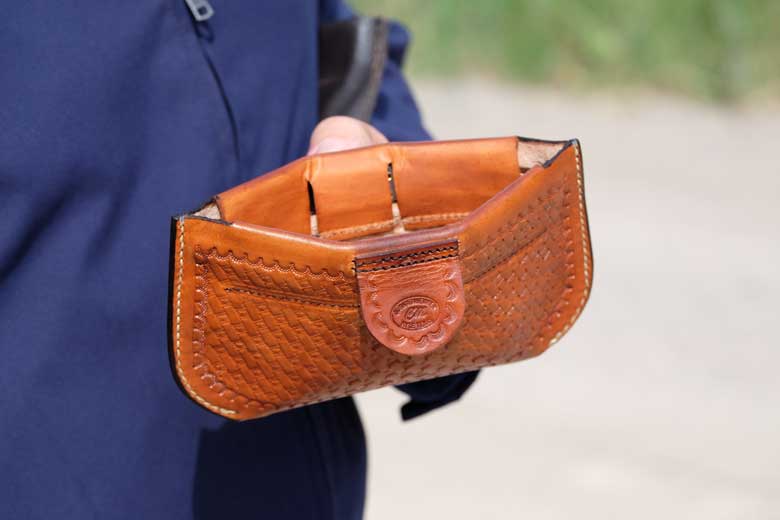 Chuck tells me he is officially retired. But he could be persuaded to make you one of these exquisite custom pellet pouches if you contact him by email at cgm71146@gmail.com. 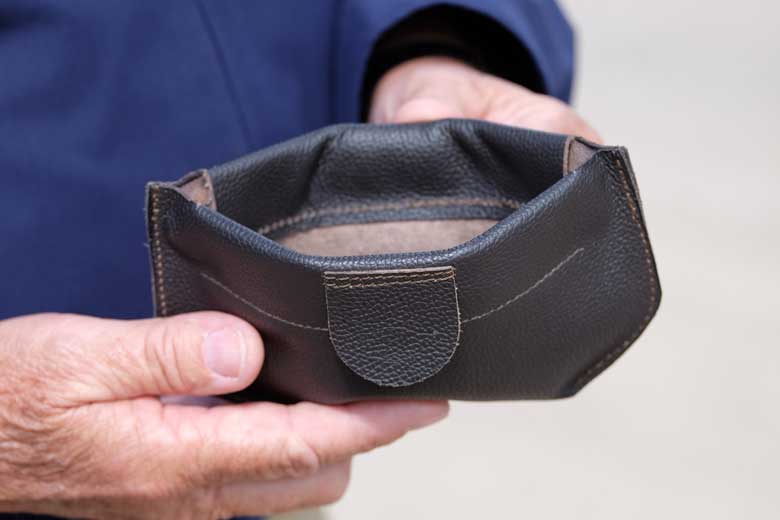 Now back to air rifles! 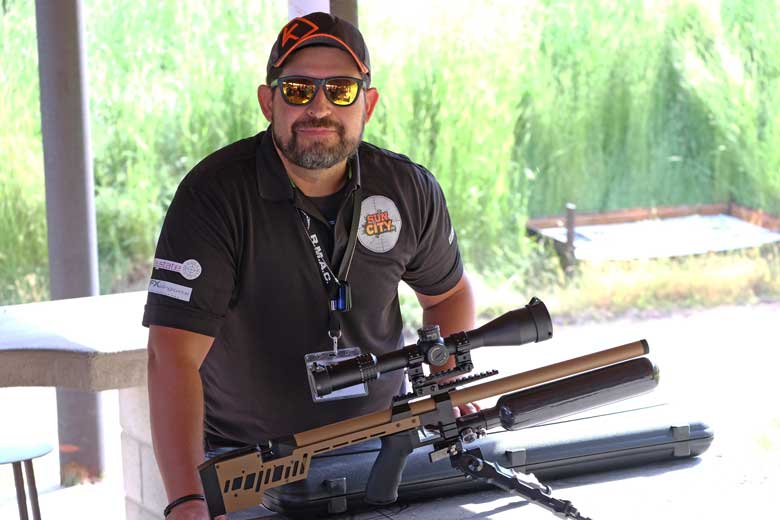 And then there’s the LCS SK-19 PCP air rifle. This gun is a selective fire model which offers full auto and semi-automatic operation. There’s a 19-shot rotary magazine and Lothar Walther barrel with a choice of .22 and .25 calibers. It’s regulated, of course, giving a claimed 110 shots per fill in .22 cal and 90 in .25 caliber.

The SK-19 is assembled in North Carolina from mainly imported parts.

LCS Air Arms had several of these guns at RMAC. Here’s a couple on their table. 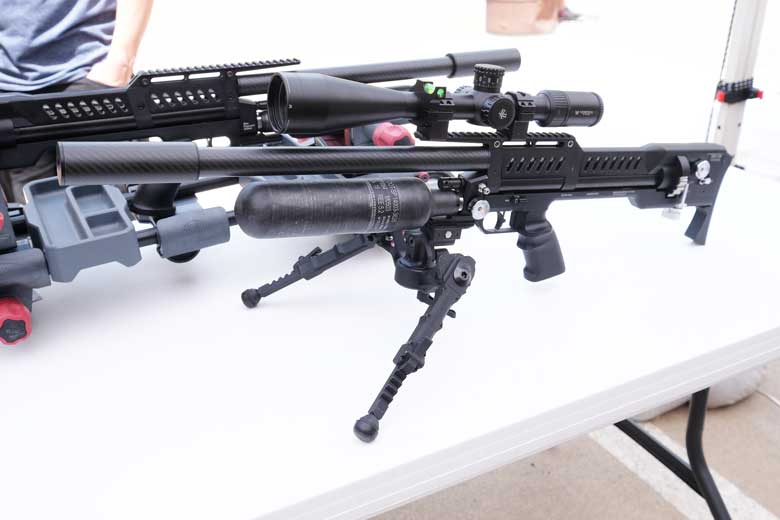 The SK-19 could also be shot on a subsidiary range. Needless to say, many people couldn’t resist trying the gun! Below, Jared of Airguns of Arizona checks out the full auto “fun switch” setting… 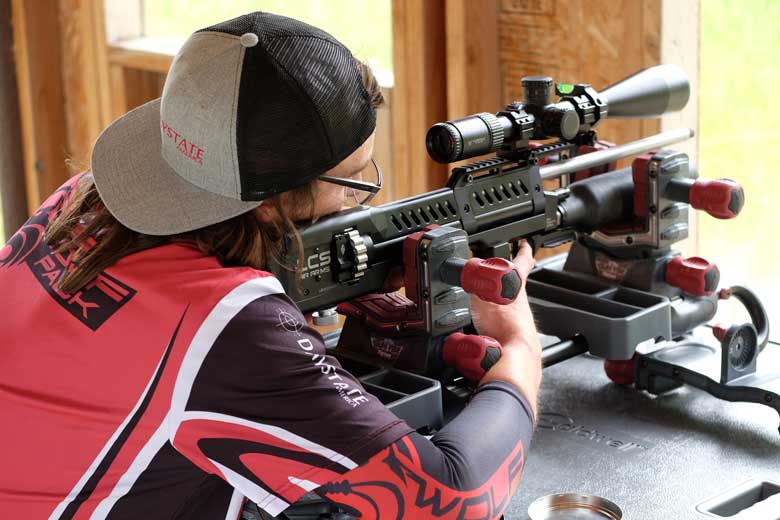 Then I shot a SK-19, too. This gun certainly works! I found that brief dabs on the trigger gave accurate 3-5 shot bursts that were very controllable on the full auto setting. LCS folk told me that the SK-19 would be available for retail sale in the USA in the near future. 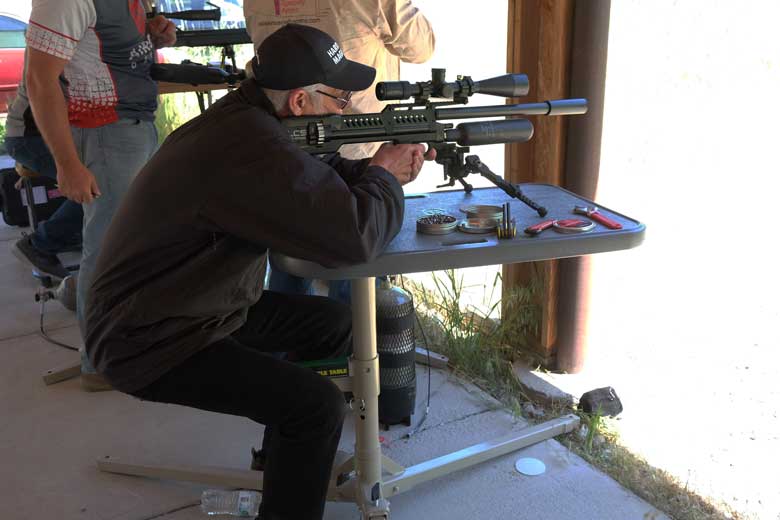 RMAC also saw a sighting of the Umarex Hammer .50 caliber big bore air rifle. Brad Webb from Umarex told me that this gun was a pre-production model, hand-build from production parts. He said that full production guns would be available by mid-year.

(I had to take the photograph this way round because of the lighting!). 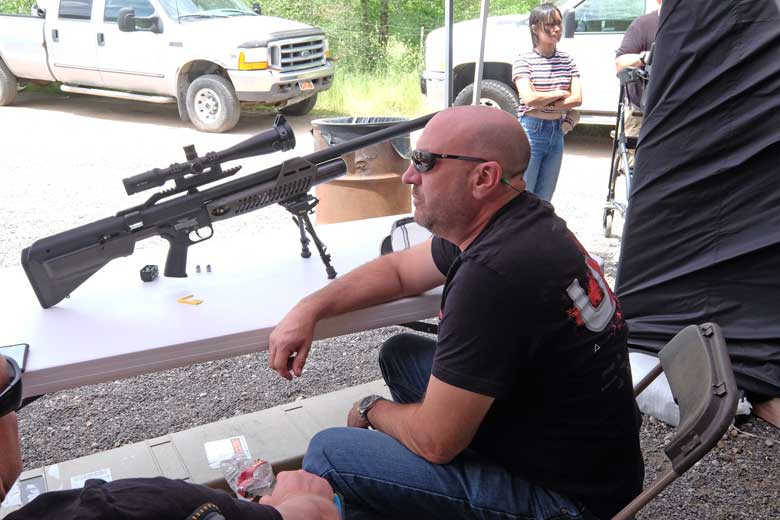 Finally in this summary of new products at the 2019 Rocky Mountain Airgun Challenge, Hatsan has a NovaStar that was being shot by Cecil Bayes. This gun was first announced at the 2019 SHOT Show and is just becoming available. That wood looks very nice… 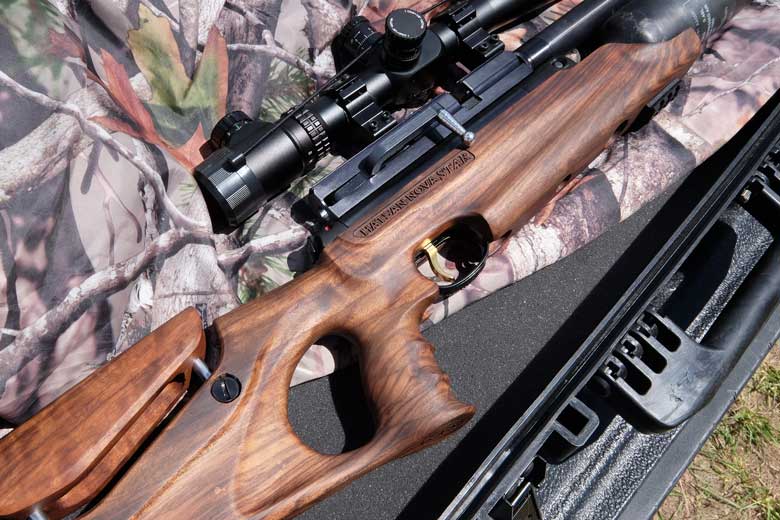