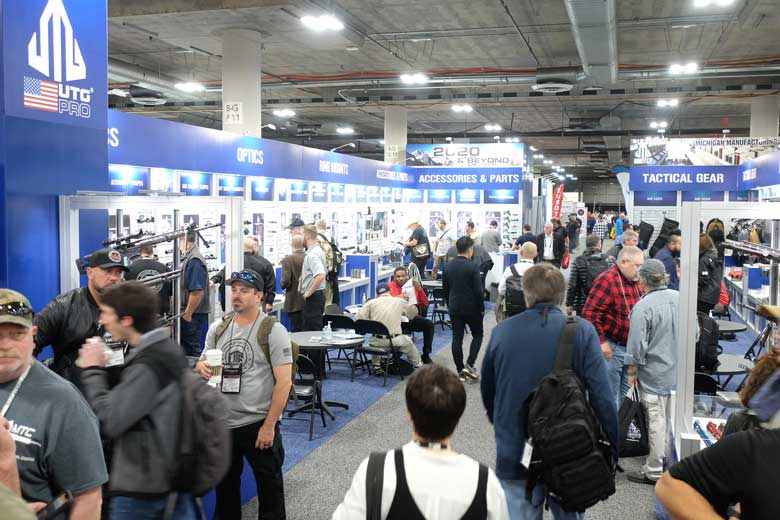 As we continue Hard Air Magazine’s coverage of the 2020 SHOT Show, there’s new plenty of new product introductions from Air Venturi and Leapers.

One new highlight was the new Springfield Armory M1a air rifle. Based on the initial Press Release photographs, we had thought that this underlever-cocking spring-piston air rifle cocked “backwards” by pulling the lever towards the front.

But Scott Stevens from Air Venturi quickly proved us wrong. It cocks in the expected manner, as we can see below. 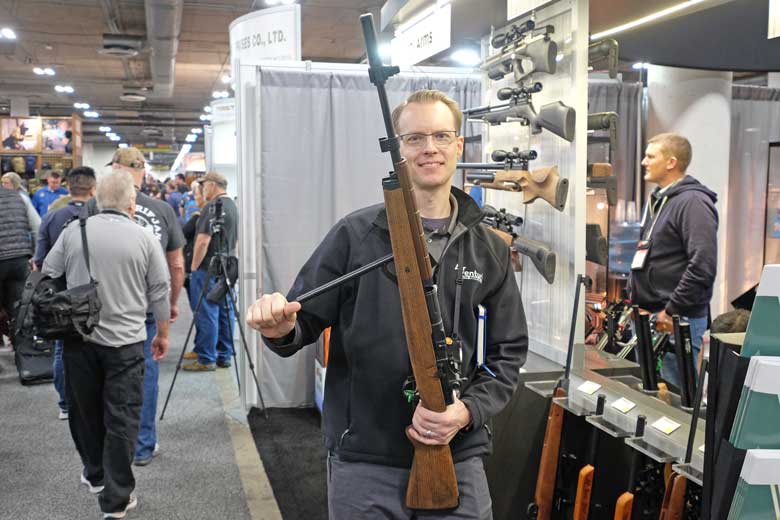 Pellets are loaded into the breech through the sliding top handguard…. 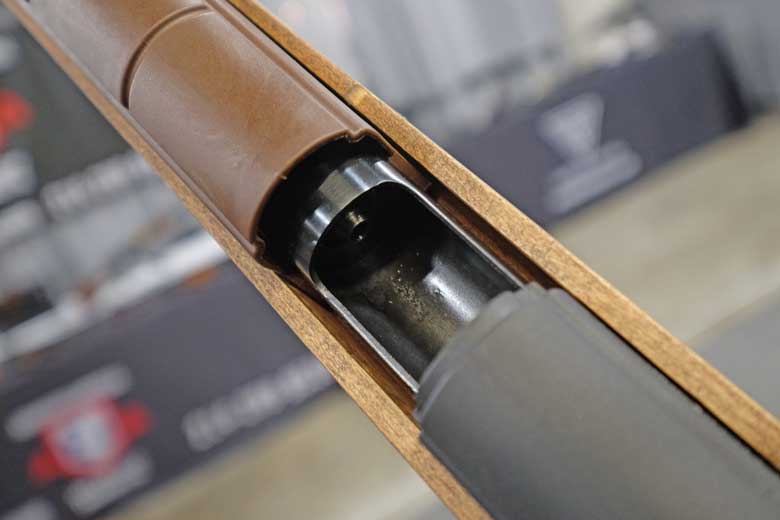 Also, the breech is bushed so that specific M1a-mounted scopes can be fitted. 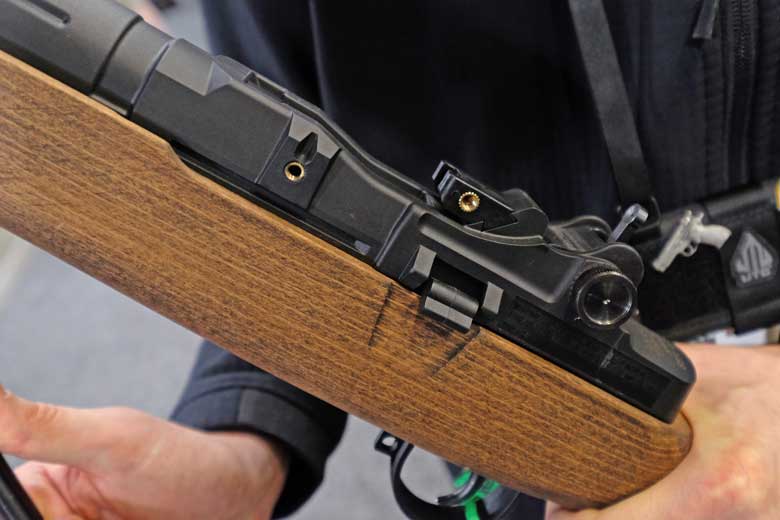 Overall, this is a great looking and feeling air rifle. Except, that is, for one thing. There’s no box magazine. Aaaaahhhhhhh 🙁

That’s a huge disappointment for replica firearms enthusiasts as the characteristic projecting box magazine is such an iconic feature of the original M14. If this magazine could not have been incorporated into the design, HAM Publisher Stephen Archer feels it would have been better to make this a M1 Garand replica, as the magazine was internal on that model. But he’s still looking forward to shooting it!

Another air rifle Scott showed us was the Air Venturi Avenger. This PCP is notable for having externally-adjustable hammer spring and regulator capabilities. This is definitely unusual on a model of this price, as is the sidelever action. 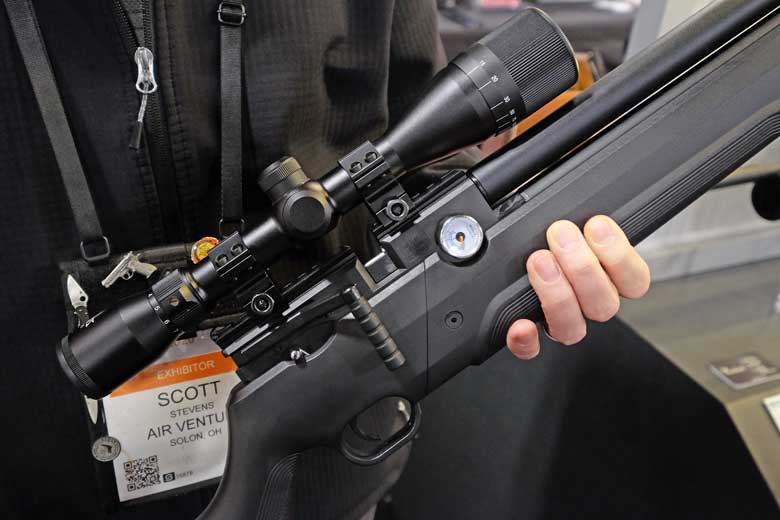 The Avenger is a $300 PCP that’s available in .177 cal, .22 and .25 caliber. That’s the regulator adjustment screw in the underside of the stock. Fill pressure is high at 300 Bar (4,350 PSI), but this can be achieved by the growing number of low-priced portable compressors which are designed to fill PCP airguns directly. 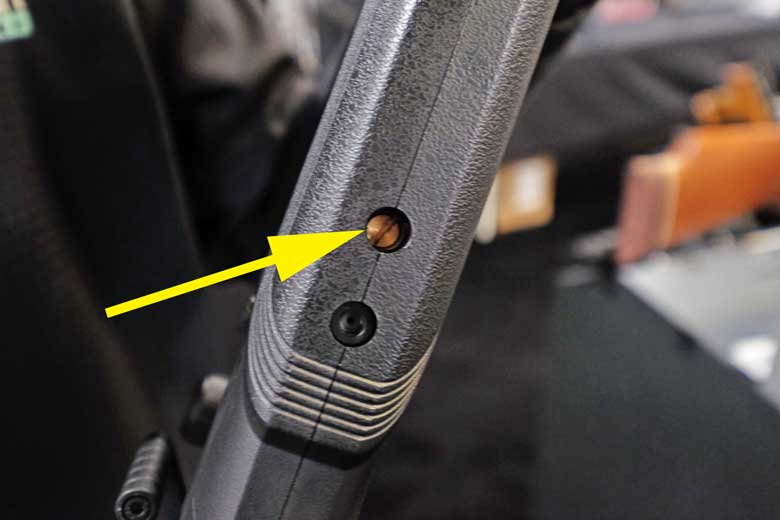 Another headlining product to be seen with Air Venturi at the 2020 SHOT Show was a new portale electric HPA compressor from Hill Pumps. This is claimed to be the quietest compressor on the market. It’s intended for direct filling of airguns to a maximum of 300 Bar (4,350 PSI). The prie is expected to be under $1,000.00. 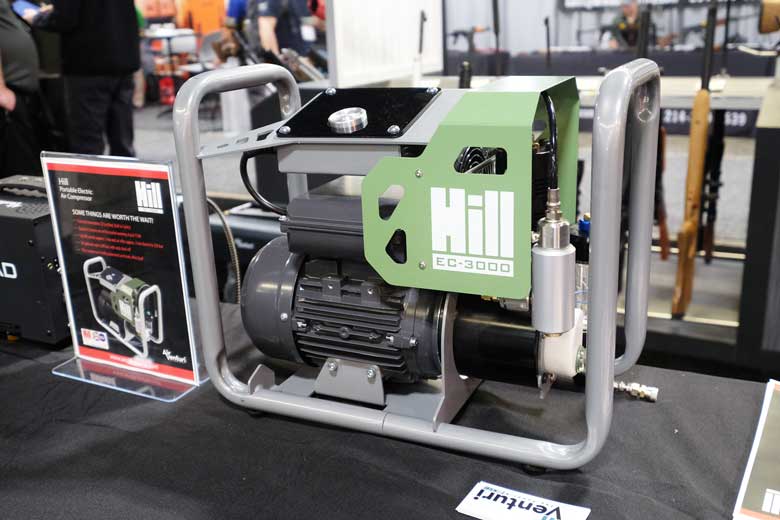 Scott also showed us another important product that should be used with every HPA compressor. It’s the Air Venturi High Pressure Output Filter. At an MSRP of $89.99, it will help to prevent moisture from entering your precious PCP airgun at high pressure and causing corrosion problems. If you don’t have a moisture protection system like this, you definitely need one! 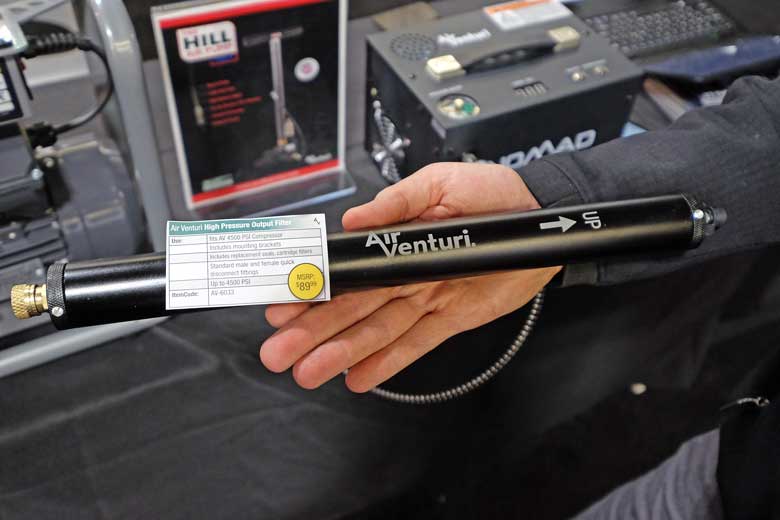 Meanwhile the Leapers booth at the 2020 SHOT Show was packed as always – see our heading photograph above.

Among other new products was a new UTG Bugbuster compact scope. But this one has a difference! First it is the first Bugbuster with a 30 mm diameter tube. Secondly, it has a built-in bubble level that’s visible through the eyepiece. The MSRP of this 3-9 x 36 Bugbuster is $254.97 and you can expect to see it available in the second quarter of 2020. 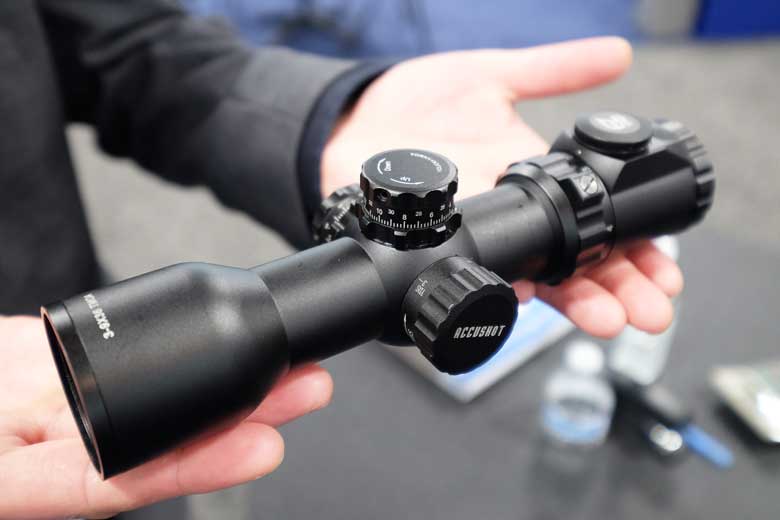 Another notable new scope from Leapers is the company’s first “made in USA” riflescope. A first prototype was on display at the 2020 SHOT Show. It’s a 1-8×28 FFP scope with an etched glass First Focal Plane reticle – a first for the company. It also features some VERY substantial turrets! 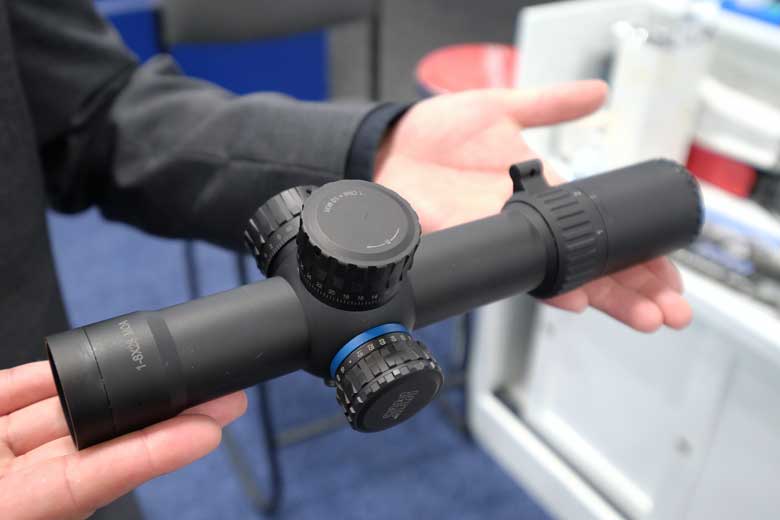 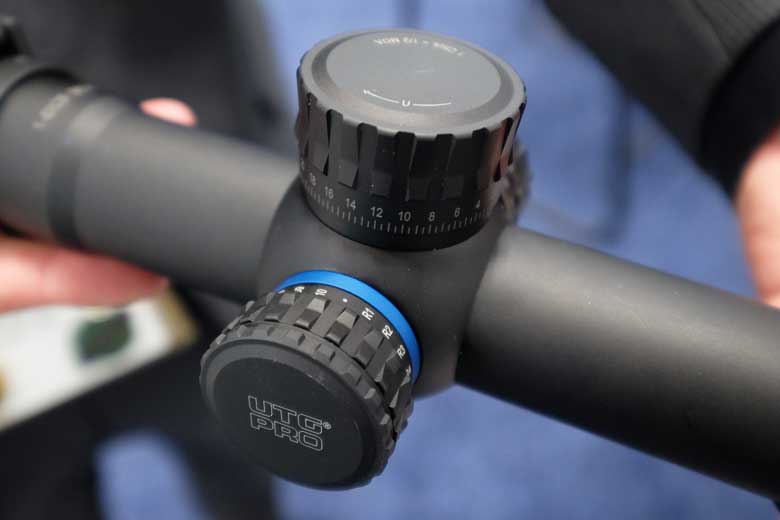 Leapers was also showing their new range of UTG Picatinny scope rings with low profile throw lever and side plate. These will be available very soon. 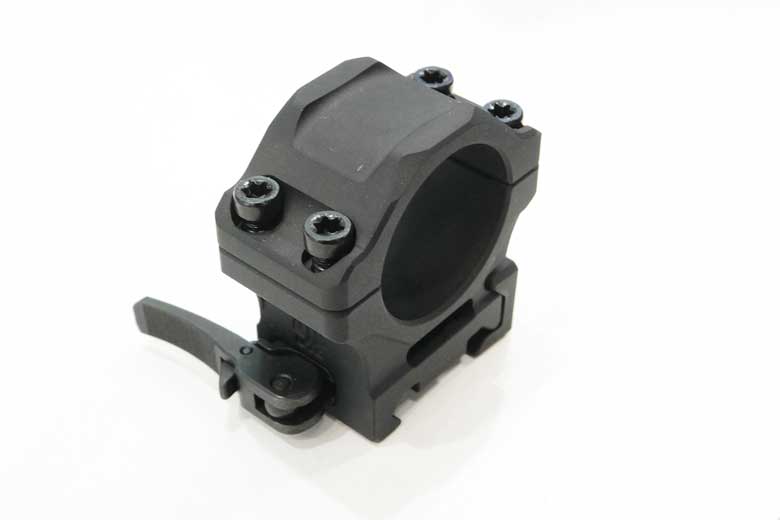 The company also has a range of scope rings and mounts Cerakoted in various colors that can be used to personalize four own air rifle. 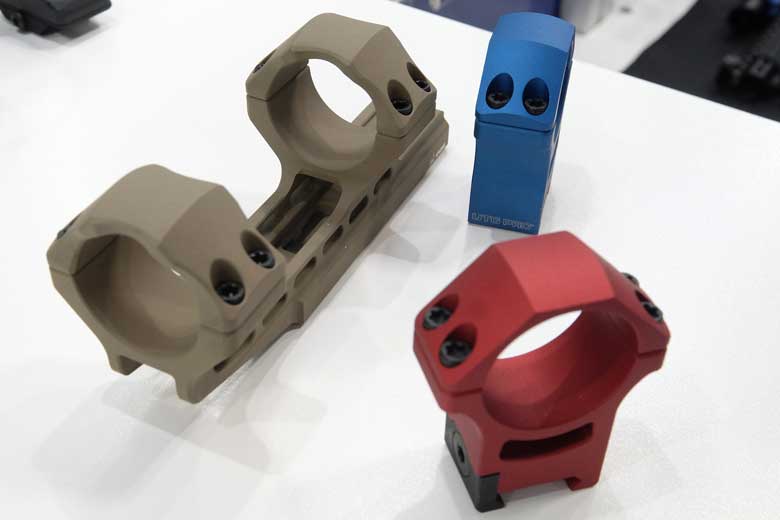 And, last but not least for today, the company has a wide range of reflex micro dot sights. Although we see one displayed below on a firearm, these could be an ideal accompaniment to many of the hugely-realistic firearms replica CO2-powered air pistols that are so popular among today’s airgunners. 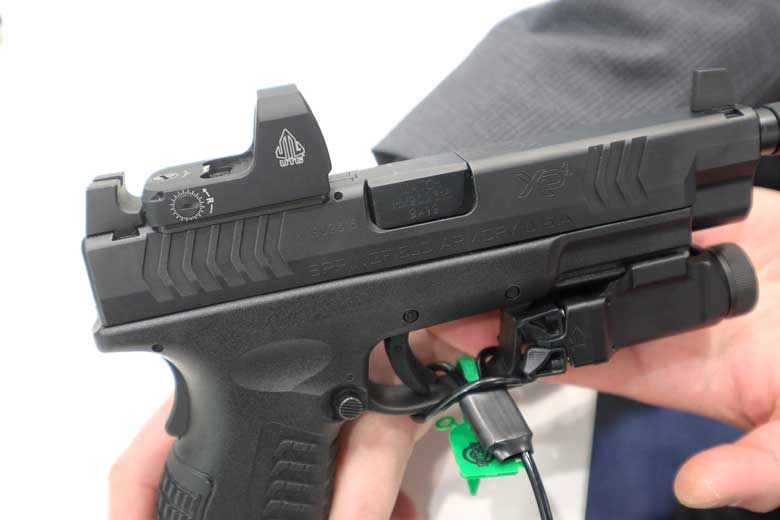 Phew! So many new airgun products at the 2020 SHOT Show and so little time! There wll be two further HAM reports from the show still to come, so stay tuned…i