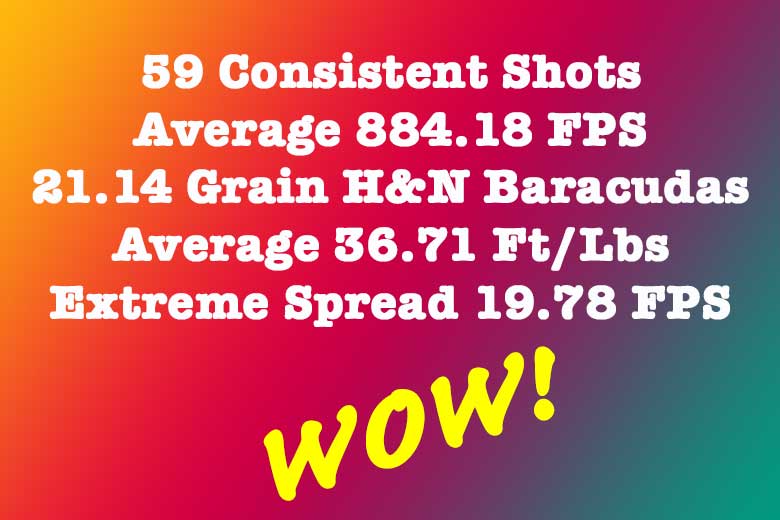 In the last post in this series, we looked at the performance of the .22 caliber Air Venturi Avenger in factory tune condition. This time, we’ll go for an Avenger full power tune. The results are very impressive for a $300 air rifle!

Last time we concluded that the  Avenger was set by the factory to somewhere about the maximum regulator pressure setting of 2,900 PSI. But it seemed that the hammer was not striking the valve hard enough for that reg setting, hence the “peaky” shot curve.

So, the obvious solution was to increase the hammer spring tension. This is adjusted using a 2.5 mm Allen (hex) wrench engaged through an aperture in the rear of the pressure tube. 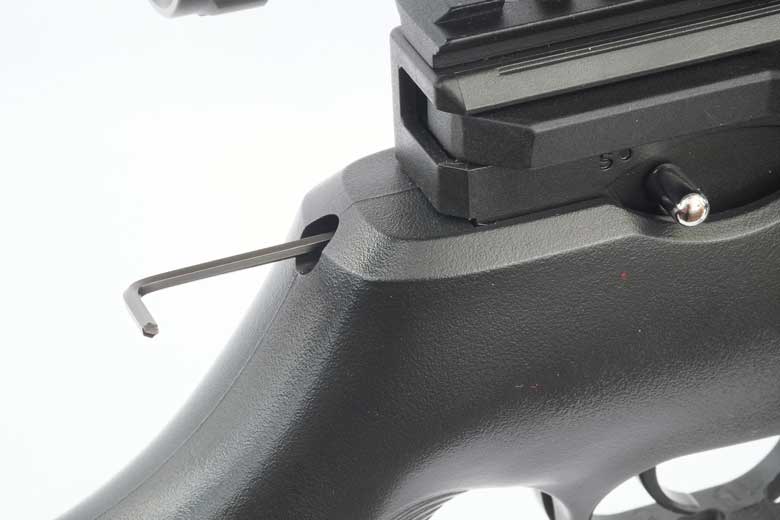 It was surprisingly hard to rotate the Allen key. However I turned it about two turns clockwise until it stopped. That was maximum hammer spring tension.

Next, I fired 10 shots using the same 14.66 Grain H&N Field Target Trophy pellets that we used to establish “out of the box” performance. Full hammer spring tension gave a significant increase in Muzzle Velocity – from 920 FPS in factory tune to 1,032 FPS.

That represented a healthy increase in Muzzle Energy from 27.52 Ft/Lbs to 34.68 Ft/Lbs. But 1,032 FPS was definitely likely to be too fast for accurate shooting.

To slow down the Avenger, I then ran 10-shot strings of successively-heavier pellets over the Chronograph. These were 21.14 Grain H&N Baracudas, 25.39 Grain JSB Jumbo Monsters and 32.40 Grain Eunjin  heavies. That certainly did the trick, as the following table shows.

Looking at a graphical version of the same data makes it easy to see how the power (orange bars) peaks, then falls with heavier pellets. The red dots show the corresponding Muzzle Velocities. 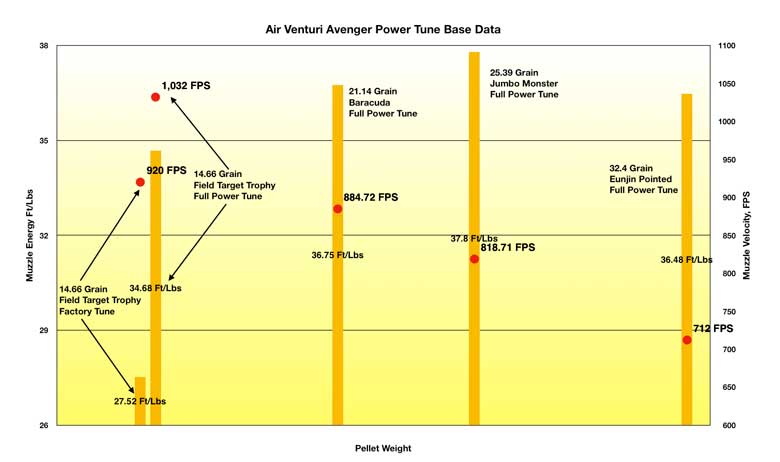 Armed with this information, I decided that the 21.14 Grain H&N Baracudas would be my choice of pellet for the Avenger full power tune. That was because the Baracudas gave a healthy 884.72 FPS Muzzle Velocity for the 10-shot string. That’s right in the “sweet spot” of FPS for accuracy, as found in our previous mega-analysis of HAM test data.

Undoubtedly the Jumbo Monsters would also be a great choice. But for this exercise, I chose to forsake a little energy for the flatter shot curve of a slightly higher velocity.

So, with decision made for the Baracudas, I refilled the Avenger to its full 4,250 PSI fill pressure. Now to test the shot curve! 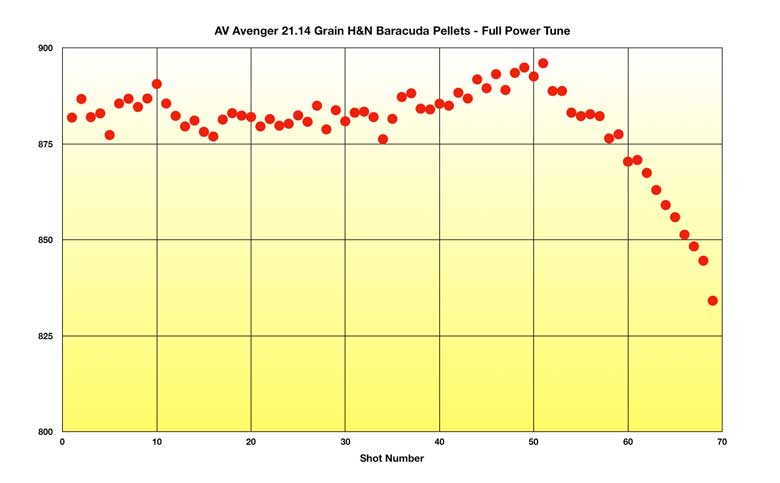 As you can see from the graph above, we now have a much flatter shot curve until fill pressure drops below that of the regulator setting at shot 59.

You can probably say that even more hammer spring tension would be required to completely flatten the curve. But we now have an Extreme Spread of 19.78 FPS, which is very creditable for 59 shots.

Check out the other parts of this Air Venturi Avenger review: 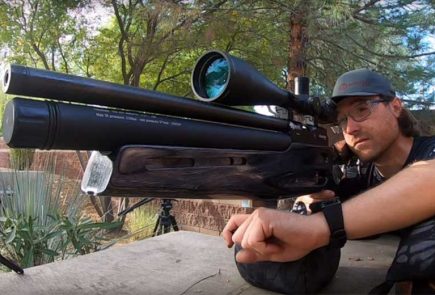