Conserving Air In PCPs – Hammer Bounce and the SSG 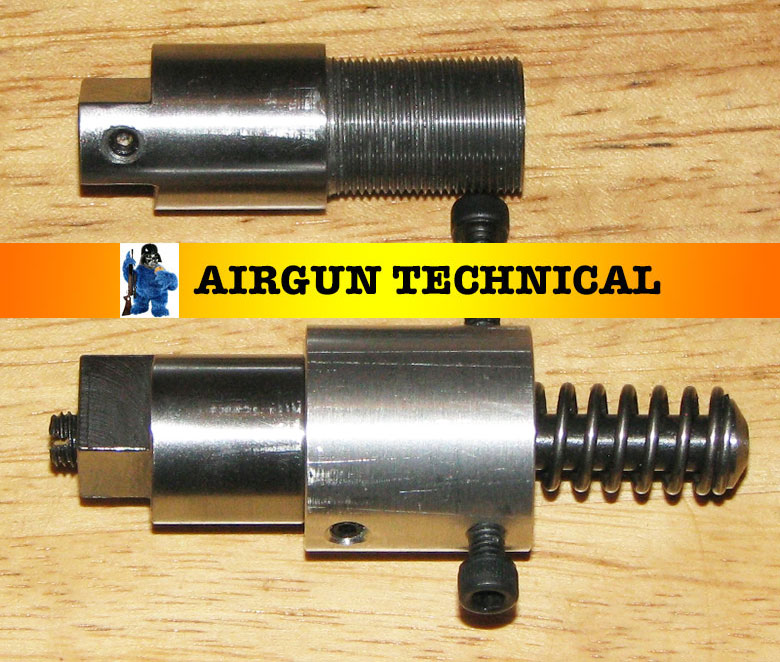 If you have been following the first 5 articles in this series, you should have a pretty good idea of how PCPs work, and what it takes to get maximum power from them. In addition, you should understand the basics of how to use the two primary ways to tune, namely port size and hammer strike.

You will have also heard me reference that too much hammer strike can keep the valve open until after the pellet has left the muzzle, wasting air. But there is another way that air is wasted…

That’s by the hammer bouncing and reopening the valve after Elvis has left the building.

All hammers bounce to some degree. Depending on the mechanical setup, and the way the gun is tuned, they may bounce hard enough to open the valve a second (or third, or fourth) time.

This releases air so late in the firing cycle it does nothing but make noise in what can sometimes be heard as a “BURP” or “BRRAAAPPPP”. It can even be so violent as to empty the reservoir completely, with the gun dry firing like a machine gun!

There have been many attempts to tame this air wasting phenomenon. Some rely on friction to slow the hammer on its return stroke. Some use a mechanical device to try and “catch” the hammer on the first bounce to prevent a second strike.

Another version uses a hammer where part of the mass (the actual striker) moves independently of the spring driven carrier.

You can use a Short Stiff Spring (SSS) that rattles around behind the hammer and allows it to have a short “free-flight” before striking the valve stem. This method was brought to my attention by my good friend Lloyd Sikes (developer of the ePCP system used in the Crosman Rogue). The SSS works well to conserve air, but increases the cocking force required.

My idea was developed from the SSS, but reduces the cocking force by introducing a preload into the spring, which rides on a “Stopping Spring Guide” – SSG. This stops the spring just before the hammer strikes the valve stem, and allows it a short free-flight before it opens the valve.

When the valve closes and throws the hammer back, it hits the end of the guide, which is preloaded into position. It then takes significant force before the SSG can be compressed and store enough energy to relaunch the hammer. The hammer rattles around, coming to rest, hopefully without reopening the valve and wasting air.

The SSG Can Increase Shots Per Fill

The SSG is not a very complicated device, either in concept or to make. It amazes me that mainstream PCP manufacturers are not yet using this idea, since it is in the public domain. Here is all that is required: 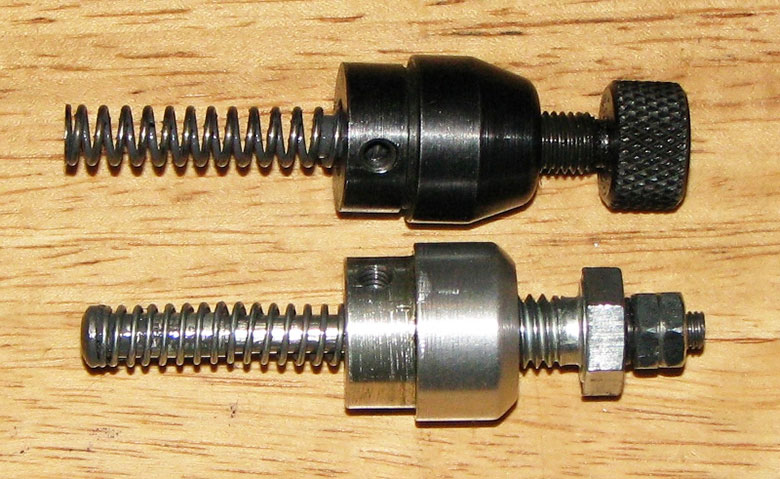 The upper item is a Rear Velocity Adjuster from the Challenger PCP. Below it is the first SSG that I made, and here is the first test in a 2560 PCP (2260 with a .25 cal. Barrel, unregulated): 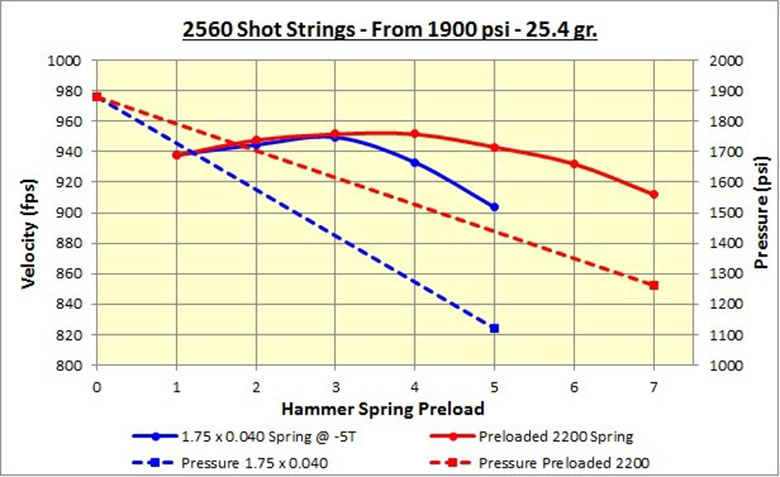 The gun went from 5 shots using nearly 800 psi of air with the Challenger RVA, to 7 shots using less than 650 psi of air, with no other changes than the SSG. That was an increase in efficiency of about 70%. Here is the SSG installed, uncocked… 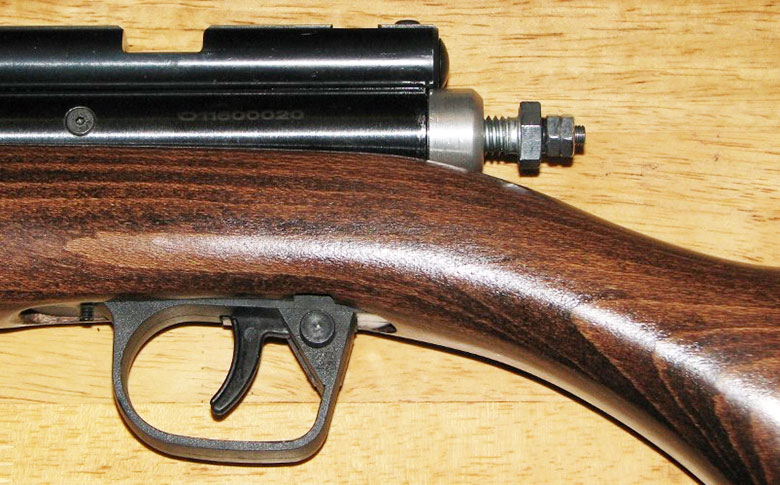 And here is the SSG cocked. You can see the spring guide has moved back with the hammer, and is sticking out behind the adjuster: 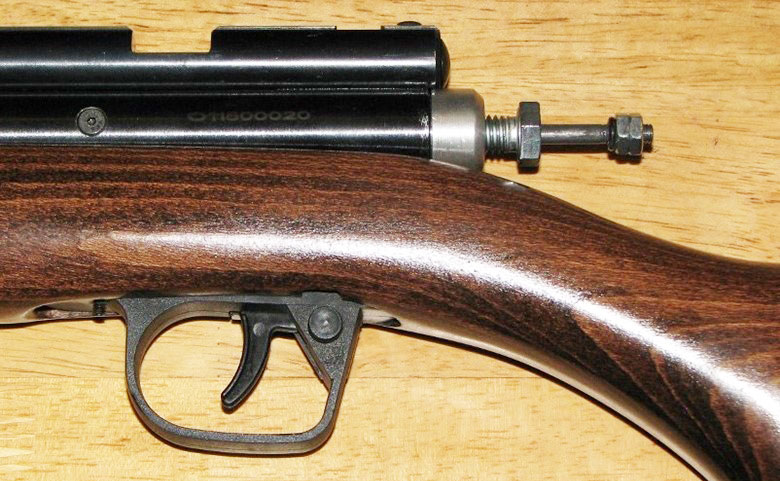 The adjusting bolt, instead of changing the preload on the spring, adjusts the gap between the end of the spring guide and the back of the hammer.

When you increase the gap, you not only increase the free-flight distance of the hammer, but you reduce the distance the spring is compressed on cocking. Hence the hammer energy and momentum available to open the valve is also increased by the SSG.

If the guide protrudes from the back of the receiver (as in the photo above) there is some danger of getting pinched when the spring guide moves forward on firing, but in some guns you can hide it inside like on the Xisico XS-60C (AKA the Ruger Fusion):

There have been at least six functional variations (by myself and others) on the basic SSG design since I introduced it. One I particularly like is where the spring travel limiting rod is fixed but adjustable (threaded into the adjusting bolt) and does not move back on cocking.
There is a sliding plastic spring guide sitting against the back of the hammer that compresses the spring when the hammer is cocked, like this one I made for my Beeman Chief:

The hammer must be drilled deep enough to clear the end of the limiting rod when cocked, of course. The advantage is that nothing moves behind the adjuster to pinch you. If you use the same pitch threads on both the rod and adjuster, you can set the preload without changing the gap by holding the rod with a screwdriver and turning the adjusting bolt. Or, each can be adjusted separately, of course. 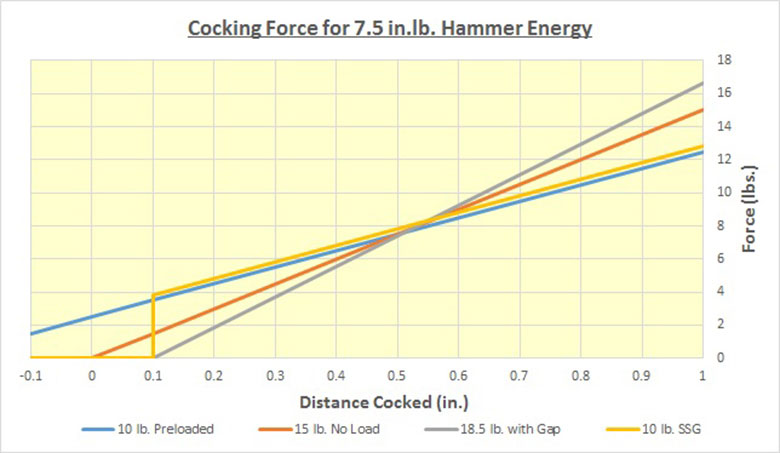 The hammer spring in most PCPs is preloaded when uncocked, like the blue line above. The SSG uses virtually the same spring in this example, but preloaded with a gap to the hammer (yellow line). The cocking force is essentially the same.

The red line is a stronger spring with no preload, and requires more cocking force. (This case, with no preload or gap, is often very prone to hammer bounce).

A short stiff spring (SSS) with the same gap as the SSG (grey line) requires an even stronger spring to get the same average force and hammer energy. The force required to cock all three springs for 1” of hammer travel is on the right end of the graph.

Both the SSS and SSG have the potential to reduce or eliminate hammer bounce (and save air) because of the gap, and free-flight of the hammer. If you have enough length, you can use an even lighter hammer spring with more preload, and reduce the cocking force even further. This is the BEST way to make an SSG, and produces the smoothest, easiest cocking.

Regulated PCPs Can Benefit Too.

A properly tuned, regulated PCP can be very efficient, but even on those, an SSG can save air, if there is any air-wasting hammer bounce present (and it can be so subtle you may not even be aware of it). Here is the shot string from a regulated HPA conversion of a Beeman QB79 with a tune I was quite proud of:

While here is the same gun, pellet, regulator and air pressure, with an SSG fitted:

The SSG combines that with the idea of stopping a pre-loaded spring guide in a system that can be retrofitted into many existing PCPs.

There are many variations possible, and no reason a manufacturer can’t apply them, as they are now in the public domain. Once in a while even a blind squirrel finds a peanut!

The SSG does have some limitations. Unless there is enough length and hammer travel, you can run into the same problems in Big Bores as before That’s not enough hammer strike for large calibers and high pressures.

The key to solving that problem is a balanced valve, and that is the subject of my next article.

PCP Manufacturers, are you paying attention yet? Imagine what you can do with both!