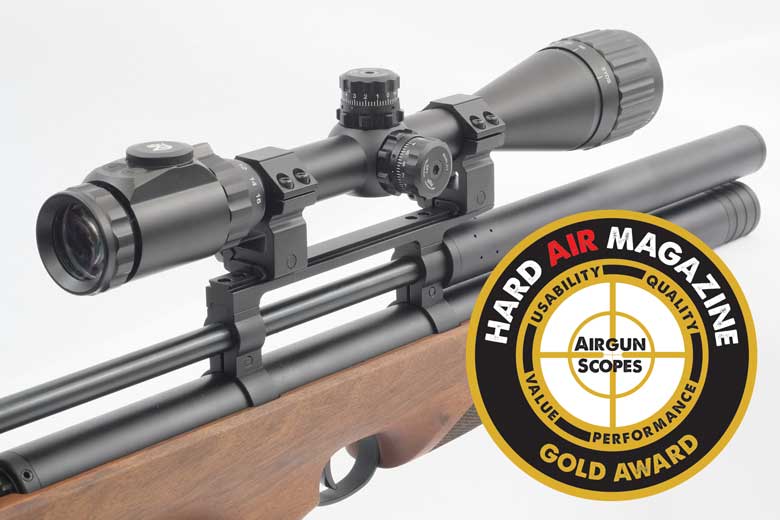 Magnification and distance markings were both very accurately matched on test. Combined with the consistent Mil dot reticle, these features make this scope an accurate tool for managing the holdover and holdunder method of shooting used by most airgunners.

It comes complete with rings and is guaranteed proof against springer recoil.

The only downsides are a slight loss of contrast at high magnifications and the need to re-focus if making a large change in magnification. But these are very small issues compared to the overall optical and mechanical performance.

85%
HAM Rating
You have rated this
Full Review

The Leapers UTG 4-16x40AO scope is very popular among airgun owners. A member of the company’s True Hunter range, it frequently features in Pyramyd Air’s annual list of top-selling scopes.

At a current Street Price of $109.95, the UTG 4-16x40AO scope tested by HAM offers excellent optical and mechanical performance. It features Leapers’ True Strength platform and so is proof against the violent forward recoil of powerful spring/piston and gas ram air rifles. Add a close focusing capability down to 5 Yards and a mil dot reticle and this scope offers all the features that most airgunners need.

But wait, there’s more! A pair of high Picatinny/Weaver rings is included, together with a comprehensive range of accessories. Leapers also offers a limited lifetime warranty.

All of this makes this 4-16 x40 scope an outstanding value. No wonder it’s so popular! 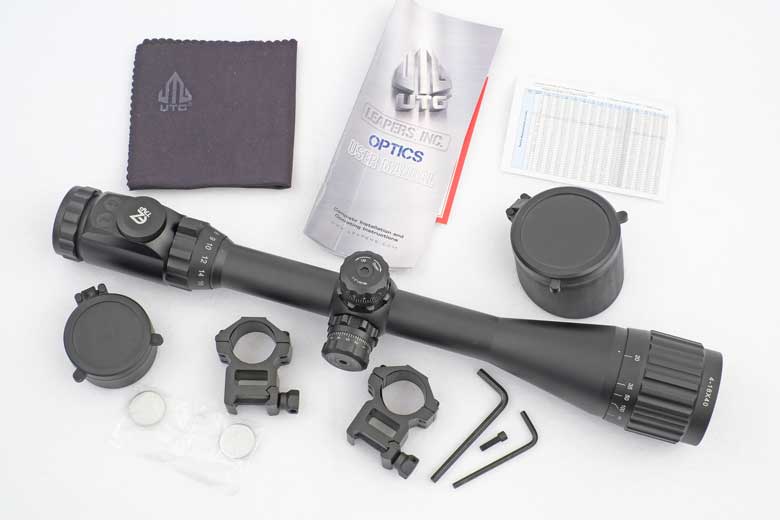 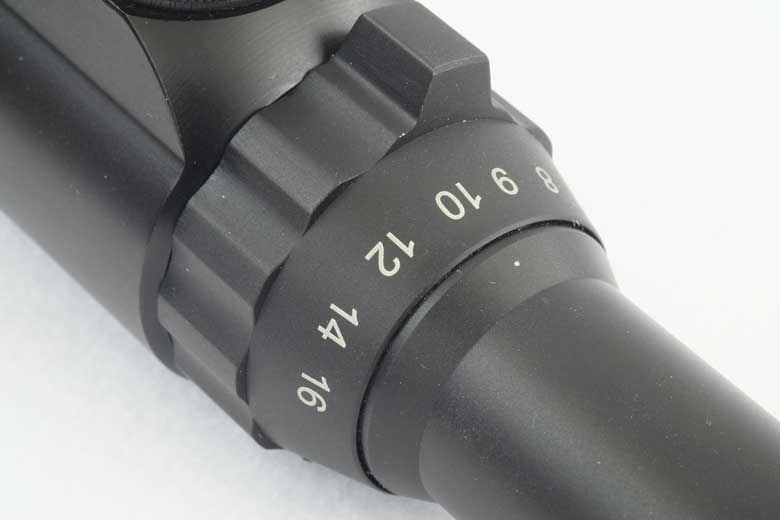 Leapers uses emerald-coated lenses to achieve high contrast and light transmission. This contributes to the excellent optical test results seen in the test graphs below. 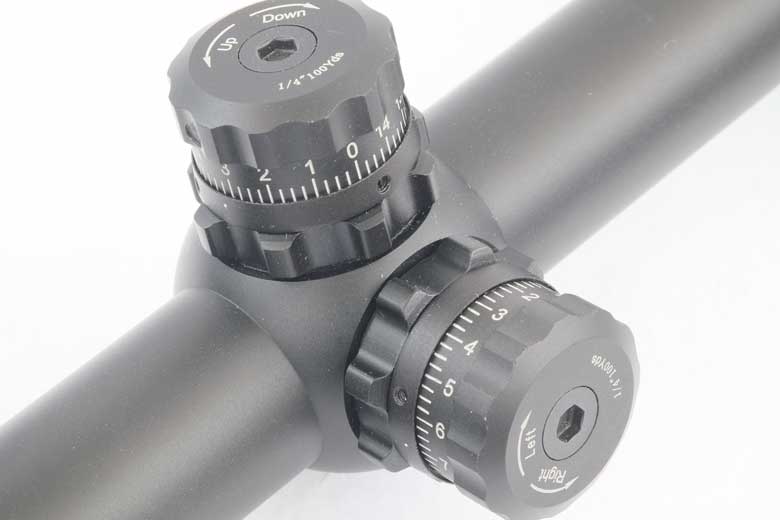 Both elevation and windage turrets have zero reset capability. Settings are locked in place using the annular ring around the base of the turret.

The turrets have clear and precise click adjustability. One click represents a difference of 1/4-inch at 100 Yards. That’s 0.625 inch at 25 Yards.

The Leapers UTG 4-16x40AO scope benefits – like all of this manufacturer’s scopes – from the “True Strength” platform. This provides protection for the optics from the violent reverse recoil which can be generated by high-powered spring/piston and gas ram-powered air rifles.

Thanks to the Trioptics ImageMaster system, We can exclusively see real “hard data” for the performance of this Leapers UTG 4-16x40AO scope. These charts compare contrast on the Y (vertical) axis against resolution on the X (horizontal) axis.

The black line indicates theoretically perfect contrast. There’s also a solid red line and a dotted red line. These represent the actual performance in horizontal and vertical directions. The closer the red lines are to the black line, the higher the contrast at the corresponding resolution. The closer the red lines are together, the less blurring there is.

For the Leapers UTG 4-16x40AO scope tested by HAM, the minimum actual magnification measured by the Trioptics system at a marked 4X. At this magnification, we can see that both red lines closely match the black line. This indicates strong contrast – confirming the testers’ subjective impressions. 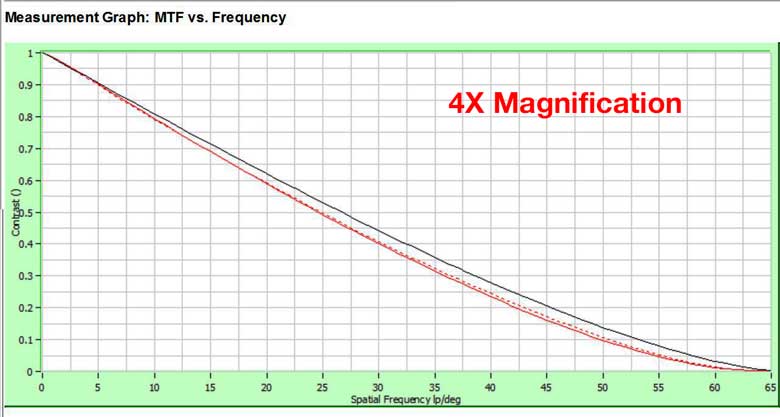 Next, Trioptics tested the scope at an indicated 9X magnification. Again, contrast was very high, although slightly less than for the 4X setting. Note that the solid and dotted red lines match very closely. This is an indication of uniform performance in both the horizontal and vertical planes. Excellent! 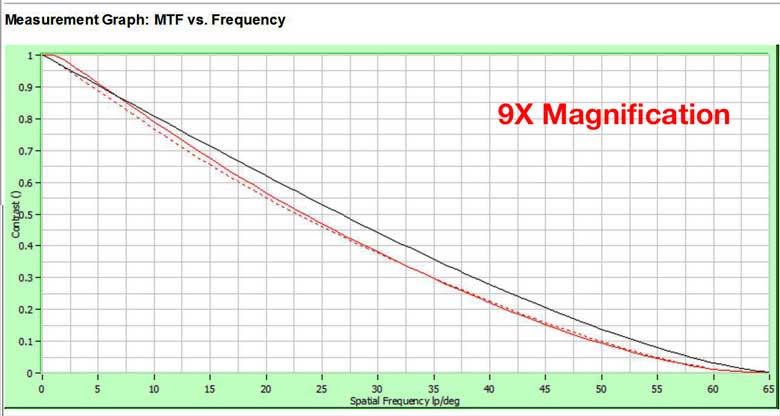 However, we know from other – as yet unpublished – tests that this is still very good performance. Particularly for the price! 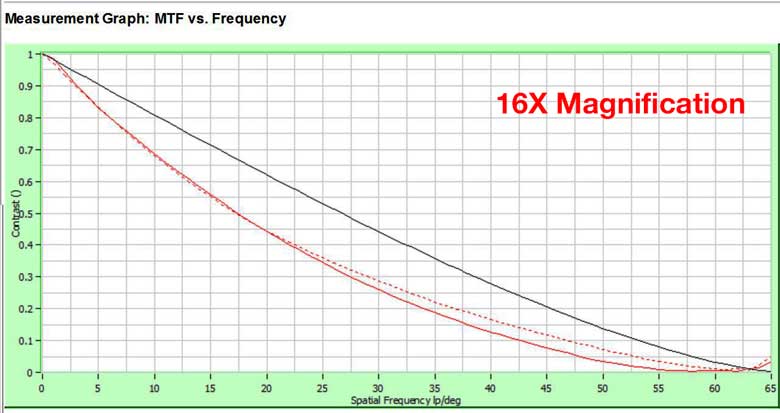 Eye relief was very consistent for both HAM Testers Stephen Archer and Doug Wall. However we know that individual eyesight – with glasses if worn – translate into different settings of the eyepiece lens in the scope. This effects actual eye relief measurements, making it impractical to give a definitive test value for this measurement.

The Twighlight Factor for the Leapers UTG 4-16x40AO scope tested by HAM was 13.5 at a marked 4X. It was 25.3 at maximum magnification.

One issue was that the image focus changed when the scope was zoomed. So, if a large change in magnification was made, it was beneficial to re-focus for optimum sharpness.

A key mechanical feature for airgun scope use is how well it can be used to measure range through using parallax adjustment. 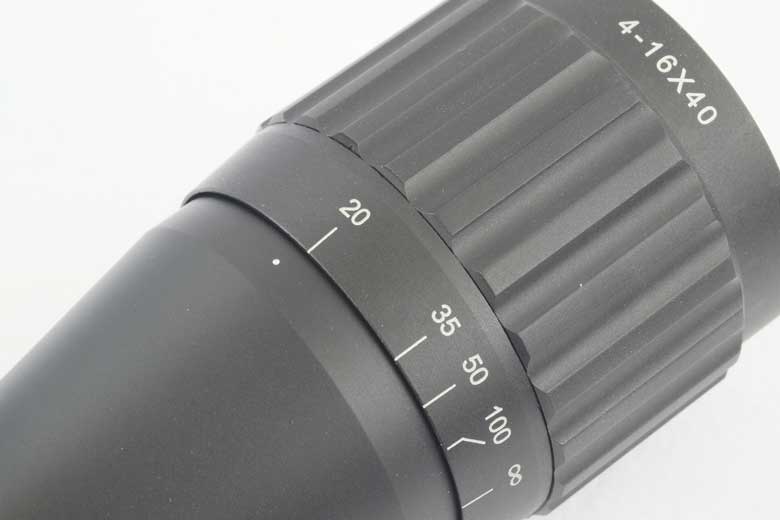 In the case of the Leapers UTG 4-16x40AO scope tested by HAM, distance to the target was represented VERY accurately using the markings on the AO (Adjustable Objective) bell of the scope.

There are nine dots on each quadrant of the reticle center point – up, down, left and right. These provide 18 points of aim across for both windage and elevation. By including the inner edges of the reticle’s outer duplex (thick) stadia, a total of 20 points of aim are available for both elevation and windage, in addition to the center cross, of course.

The HAM Team measured the Mil Dots as being exactly the correct distance apart when set to the intended 10 x magnification. This means that the Leapers UTG 4-16x40AO scope can be used with precision for range estimation and holdover correction.

Minimal to no backlash was found in operation of the AO focusing ring or the zoom ring. 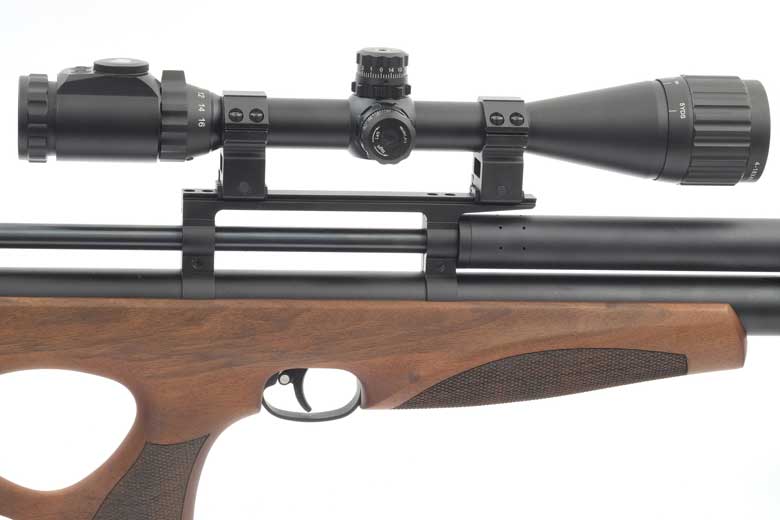 It’s very difficult to compare the optical performance of scopes with different magnifications. The vast majority of riflescopes used for airgun shooting include 9X magnification in their zoom range. So, HAM has set a “standard magnification” of 9X to measure a set of meaningful parameters.

The clear objective lens diameter was 40.25 mm – just a fraction above the claim.

The maximum tested magnification was actually 15.89X – as tested by the Trioptics ImageMaster system. This is just 0.7% less than the claimed maximum magnification. That’s very close.

The minimum magnification measured by the Tripotics system was 4.53X. That’s somewhat higher than the marked 4X – actually by 11.7%.

Working from these actual magnifications, the magnification range of the Leapers UTG 4-16x40AO scope tested by HAM was actually 3.5 times (that’s 15.89 divided by 4.53). That compares to the 4 times (16 divided by 4) of the specifications.

The Leapers UTG 4-16x40AO scope has a wire reticle with clear Mil dots. It’s very easy to use these dots for holdover/holdunder when shooting. Together with the accurate range markings on the AO bell, it makes this scope ideal for use with most air rifles.

The wire reticle is quite thick. This is beneficial for hunting, even more so when one of the many available illumination colors is selected if shooting in poor conditions.

However, some users may find the reticle to be rather thick for precision target shooting. 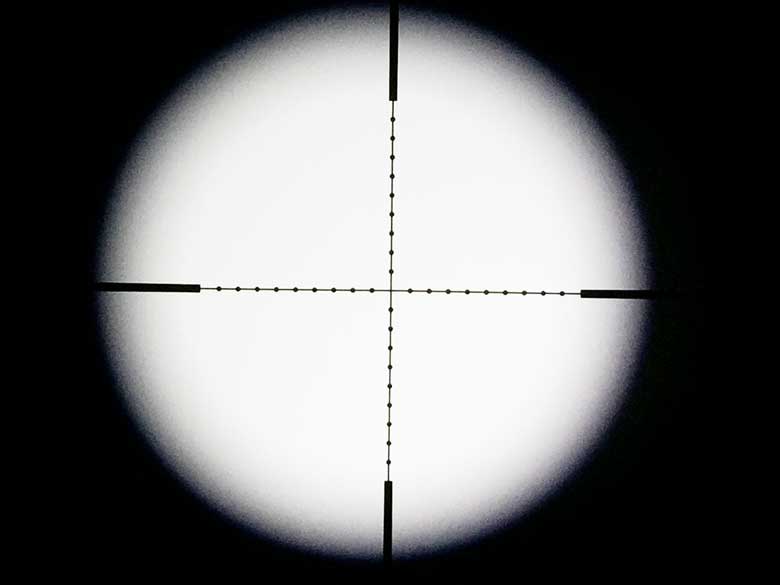 The Mil dot reticle is designed for holdover/holdunder use at 10X magnification. However, it can also be used at 5X if desired, by doubling the number of dots used (to compensate for the 50% less magnification).

Being at the front of the scope, the Adjustable Objective ring is likely to be a long reach forward for many shooters. Rotation is quite easy for the user, yet the AO ring is tight enough that it’s unlikely to move without deliberate rotation.

The same applies to the zoom ring. This is smaller but has a short lever built-in, making rotation quite convenient when a change of magnification is required.

With an overall length of just over 14.5 Inches, this is a long scope which may cause problems if mounted on some breakbarrel air rifles or short bullpups. However, it is about average length for a riflescope of 16X magnification.

The scope is supplied with a comprehensive suite of accessories, tools and spare parts. But the most useful is the inclusion of a pair of solid Weaver/Picatinny rings. These high rings will work well with the scope in most situations – on airguns and firearms.

If your air rifle has traditional dovetails for scope mounting – like the Diana Skyhawk in this article – it’s still easy to use the Weaver rings. All you need is the UTG Dovetail to Picatinny rail adaptor (Leapers part MNT-DT2PWo1). As you can see in our photographs, it’s just about invisible in use! 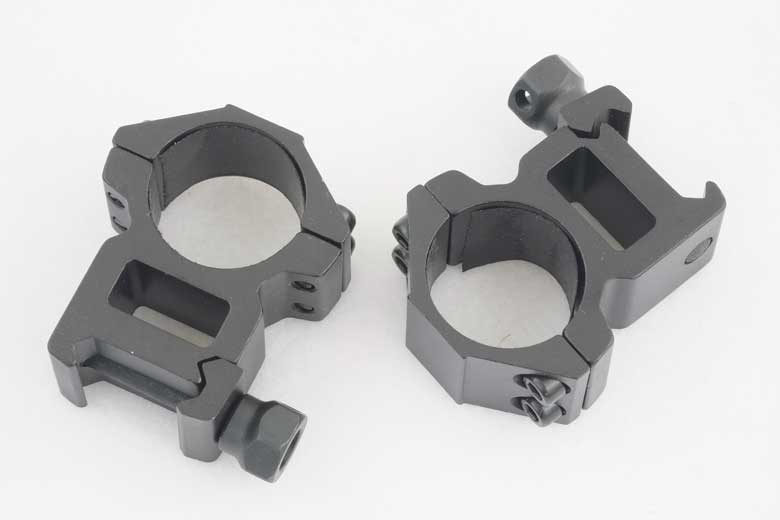 As with many Leapers scopes, the UTG 4-16x40AO scope incorporates the company’s EZ TAP reticle illumination system. This allows the user to choose from no less than 36 different colors, including regular red and green. Of course, it can be turned off at will with the reticle being un-illuminated. 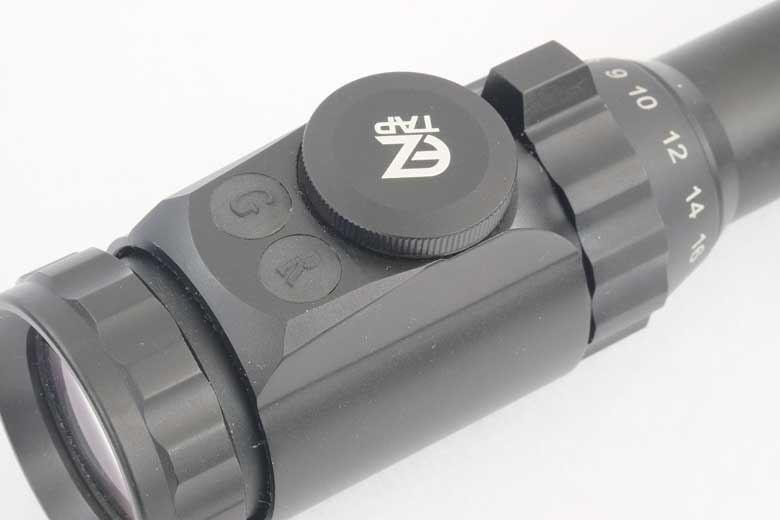 Typically, Leapers includes 2 batteries for the illuminated reticle system. There’s also a comprehensive, color-printed user manual supplied with the scope. This is a “generic” manual covering multiple models, however it contains much useful information, is well illustrated and is easy to understand. You can see a PDF version of it here.

Leapers offers a limited lifetime warranty on their scopes for defects in material and workmanship. So long as the user doesn’t disassemble the scope or damage it through mis-use, that is, of course!

This comforting warranty provides for the repair or replacement of  defective products for the duration of the product’s life span. It’s supported by staff, parts and products at Leapers HQ in Livonia Michigan.

For more information about how to read these graphs, check out this post. It’s easy!